Culture Nov 28, 2016
More than two decades after opening, Osaka’s Umeda Sky Building continues to grow as a popular sightseeing destination. Burgeoning visitor numbers include a high proportion of international tourists, thanks to praise of the building’s design in English-language media and guidebooks.

The Umeda Sky Building, an architectural symbol of Osaka completed in 1993, consists of two 40-story skyscrapers bridged at their upper reaches by a structure known as the Floating Garden Observatory. In a pioneering construction process, the observatory was largely assembled at ground level before being hoisted to a height of 173 meters and fixed into place. 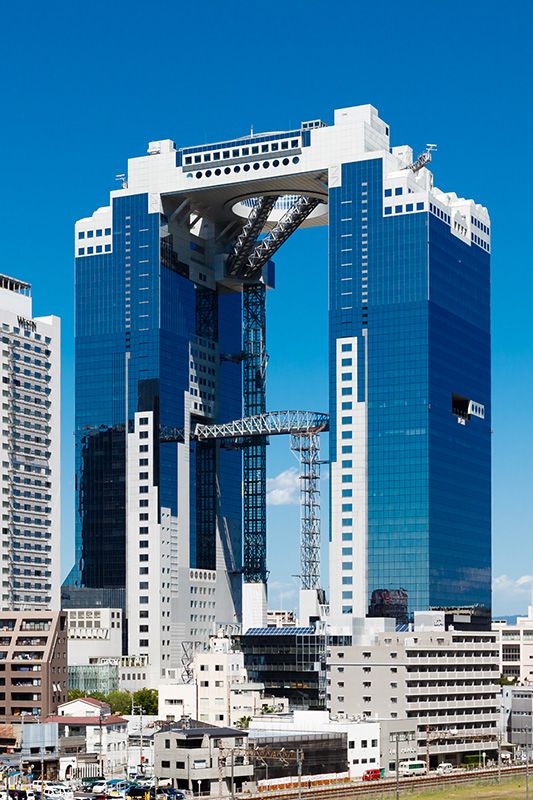 The Umeda Sky Building has been described as a space-age version of Paris’s Arc de Triomphe.

The building’s main attraction is the observation platform, but the journey up to the entrance on the the thirty-ninth floor is equally entertaining. Visitors take an elevator from the third to the thirty-fifth floor before riding a spectacular 45-meter long escalator that seems to hang in mid-air. 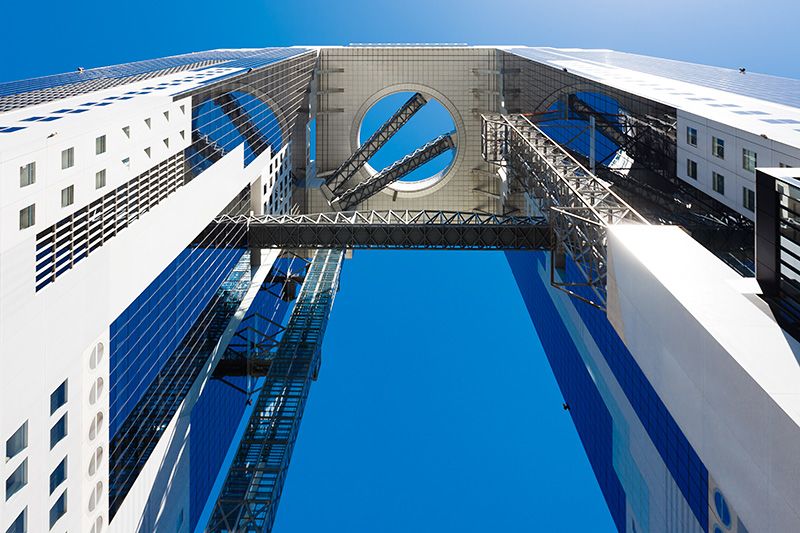 The elevator shaft can be seen on the side of the west tower (left), while high above escalators form a “v” shape across the central circle cut out of the floor of the observatory.

The observatory provides a breathtaking 360-degree view and has an open terrace where visitors can feel the gusting of the wind, an unusual feature at such heights. Crowds gather on the west of the building each evening to see the sun setting over the Rokkō mountain range and the Kii Channel. At night the south side offers a spectacular view of the shining lights of Osaka’s skyline. These sights appear on respective lists of Japan’s best sunsets and nighttime scenery. 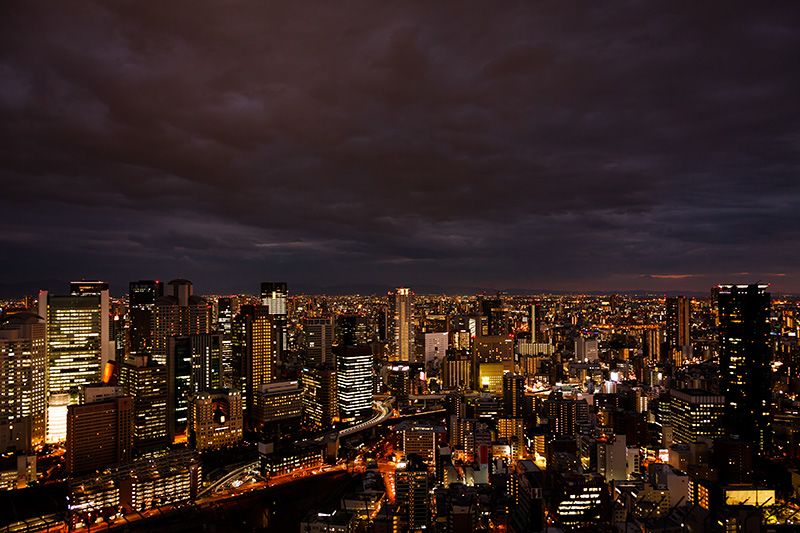 Skyscrapers light the Osaka skyline to the south of Umeda Sky Building.

The building was not always as popular with visitors as it is now. Takase Nana of Sekisui House Umeda Operation, which manages the site, suggests that the building being completed in 1993, right after the bursting of Japan’s economic bubble, was a factor. 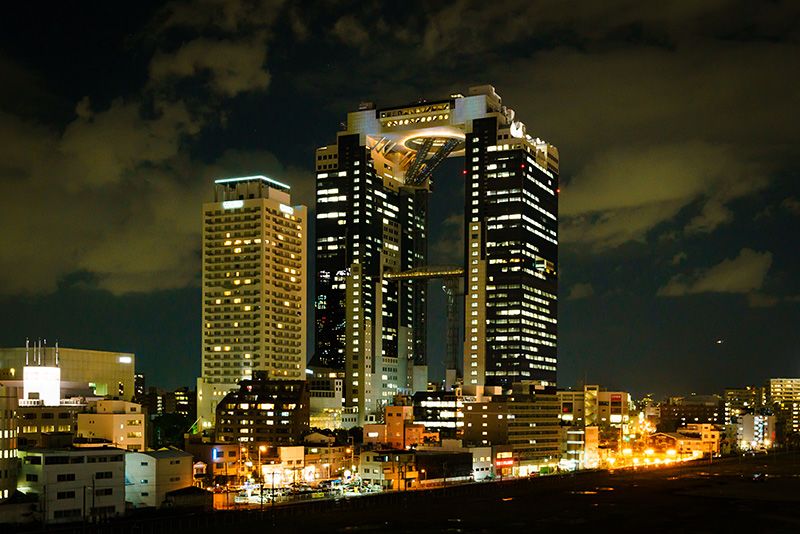 More than two decades after completion, the building retains an aura of innovation.

It is true that in a country suffering from a recession, when people were seeking ways to economize, the cutting-edge skyscraper may have appeared like a frivolous remnant of the excesses of the bubble era. Initial visitor numbers were strong, with 1.03 million in the second half of 1993, after a July opening, and 1.08 million in 1994. Yet, these figures gradually dropped until the attraction averaged around 500,000 visitors a year from 2003 to 2006. 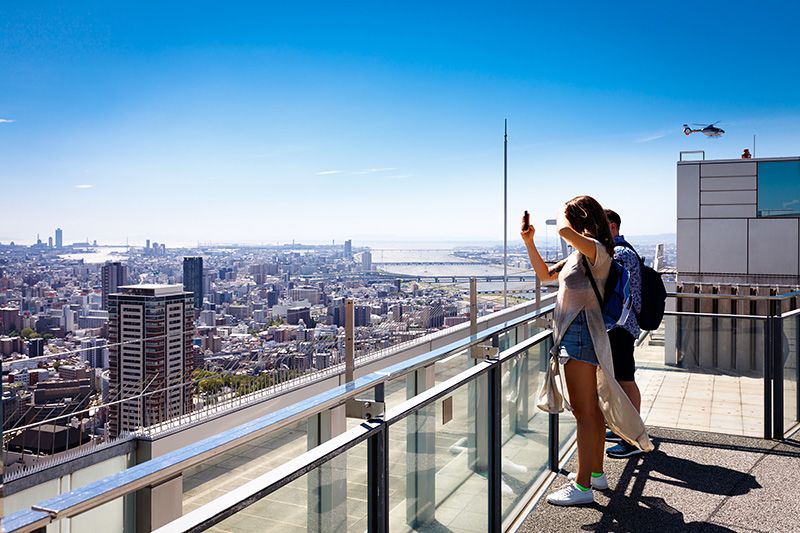 Unlike most skyscrapers, there is an open platform on the rooftop.

Employees did not lose heart, however, and their patience was rewarded with a flood of praise from overseas. In 2008, The Times selected the Umeda Sky Building alongside the Parthenon, Taj Mahal, and Sagrada Familia for a list of the top 20 buildings around the world. The British newspaper described it as a “high-thrill building,” offering “unparalleled panoramic views.” It was then introduced in a Lonely Planet guidebook as Osaka’s “most dramatic piece of architecture.” This acclaim and subsequent positive word of mouth via the Internet raised its profile among international travelers and fans of architecture, encouraging them to see it for themselves. 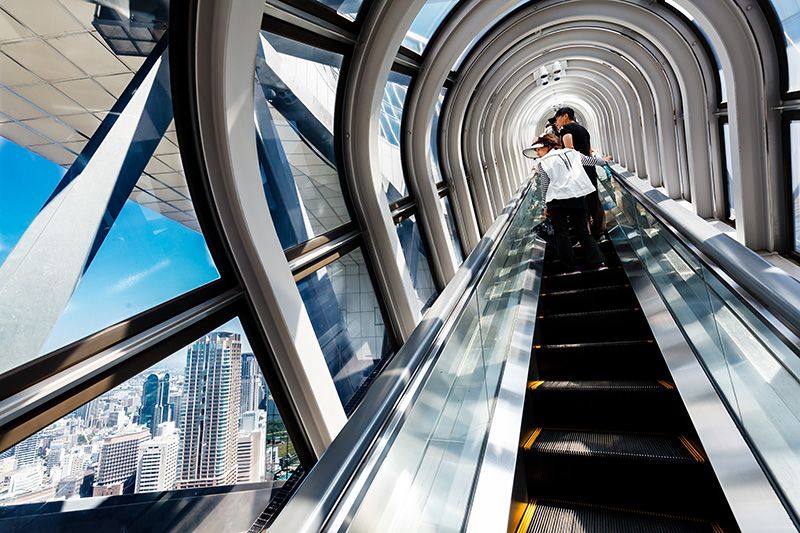 Stairway to heaven? The view from inside the 45-meter long escalator.

“The number of foreign visitor surged after 2008,” Takase notes. “This was when we were renovating facilities and looking to attract tourists to mark our fifteenth anniversary, which also contributed. As visitor figures continued to grow, in 2014, we started talking about breaking the million mark. Then in 2015, we blew away our goal with a total of 1.21 million visitors.” 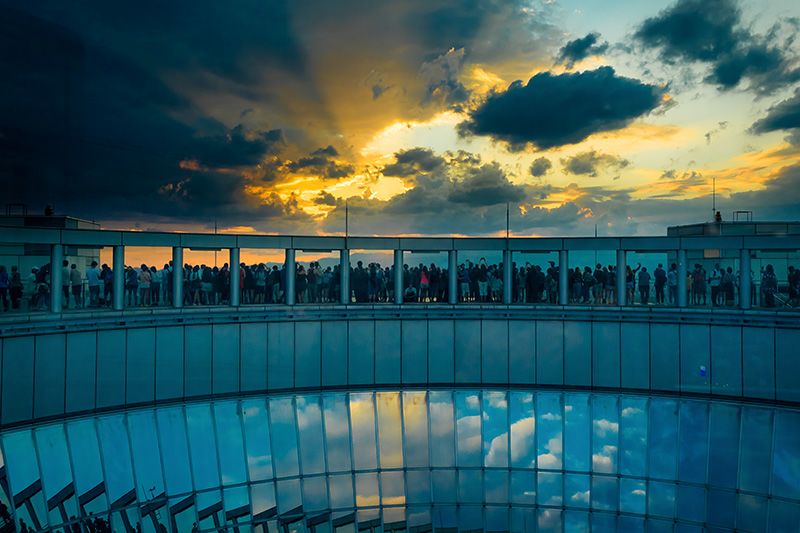 The western side of the deck packed with people watching the sun set.

The proportion of foreign tourists is noticeable. In 2015 around 60% of visitors were from overseas, and this share is approaching 70% in 2016. How has the influx changed the Umeda Sky Building’s image? “Before, most visitors came to see the sunset or the night view from the Floating Garden Observatory,” Takase notes. “But many visitors from abroad simply come to appreciate the building as a work of architecture. The reputation it enjoys among foreign tourists is also encouraging more Japanese to visit.” 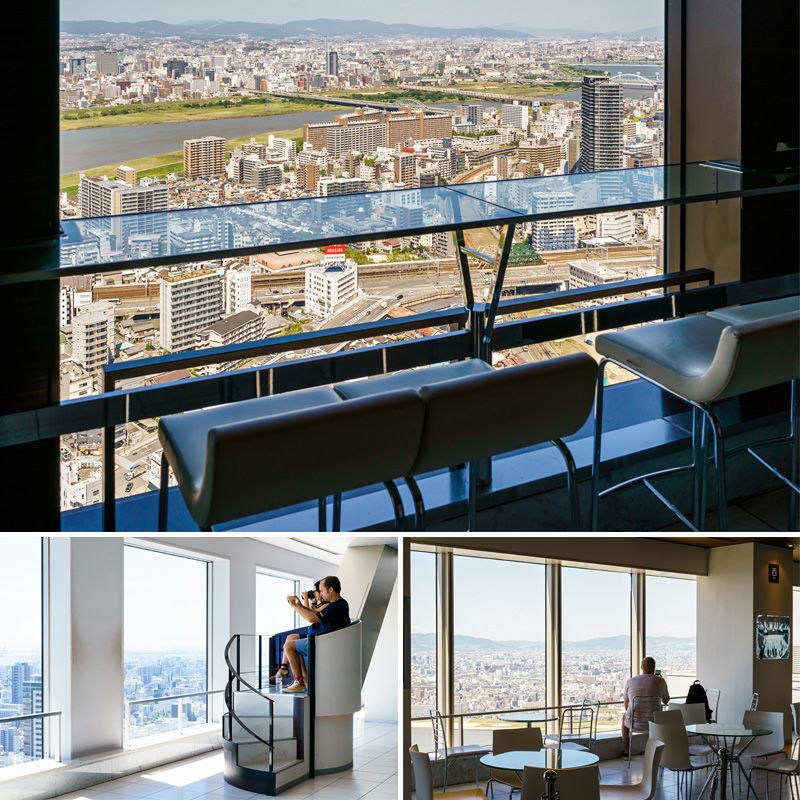 On the fortieth floor there are several places to enjoy something to eat and drink while taking in the view.

Along with the view, the Floating Garden Observatory is also a popular spot for making proposals and local staff sometimes offer support to those planning to pop the question, such as by looking after prepared bouquets of flowers.

The observatory is open until ten at night and most visitors arrive at sundown or after dark. Some also drop by during the daytime, which is the best time to admire the architecture of the building and the reflections of the sky and clouds on its glass exterior. 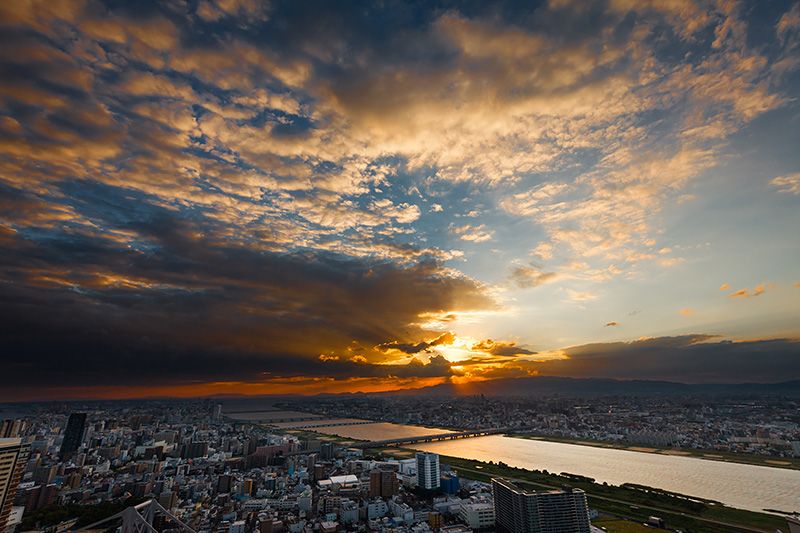 With no high buildings to the west, this is the best side of the observatory for viewing the sunset.

(Originally published in Japanese on October 18, 2016. Photographs by Miwa Noriaki.)