Society Culture May 17, 2016
Japan is enjoying an ongoing boom in yakei, the appreciation of nighttime scenery, which has become a popular form of tourism in its own right. The bright lights of urban landscapes are especially popular, but there are many variations, from factories to hot springs.

Many of Japan’s traditional festivals take place at night. Among the most famous are the Neputa Festival’s parade of illuminated floats in Hirosaki, Aomori Prefecture, and the Gozan Okuribi in Kyoto, in which bonfires lit on mountains surrounding the city form kanji characters and other shapes. Since ancient times, countless poems have been written about the moon, as one of the beauties of nature, and this longstanding affection may be a reason why nocturnal celebrations are so numerous. In Japan, aesthetic enjoyment of the night has nurtured a culture of appreciation for nighttime scenery. Over the last decade or so, this has grown into a major entertainment industry. There are now more than 1,000 spots nationwide with LED illumination installations.

Two historical factors underpin the popularity of yakei, or night scenery, in Japan. One is the mass adoption of fluorescent lights as the country rebuilt after defeat in World War II left it in ruins. These brightened family homes, banishing the darkness from corners, and combined into gleaming white cities of light. The effect is quite different from urban night views consisting mainly of orange sodium lights, as is common elsewhere in the world. It may almost seem like the ground is scattered with snow when looking out over such cities renowned for yakei as Nagasaki, Kobe, and Sapporo.

The second factor is the collapse of the economic bubble in the early 1990s. Financial pressures forced a tightening of purse strings, fostering a boom in appreciation of night views, for which no outlay is required. As aficionados became more discerning, developing individual tastes, a multitude of different kinds of nocturnal scenery came to attention. These include the industrial pleasures of factories at night and the charm of the supermoon and other lunar views.

Now that the idea of yakei kankō (night view tourism) has risen to prominence, there are many initiatives around Japan for making the most of local sites. Observation decks, lights, and tours accentuate the appeal of these sites, while multilingual information helps to draw in international visitors. This year the Yakei Summit was held for the eighth time. Ongoing efforts are being made to officially designate the country’s most beautiful night views and locations for moon viewing.

Further manifestations of Japan’s love for night views include a focus on the particular shapes that city lights form, such as the swallowtail butterfly yakei of Mutsu in Aomori Prefecture. The addition of illuminations can create new sites, whether lighting up seasonal cherry blossoms and autumn leaves or places like castles, temples, shrines, railways, and the buildings of Edo period (1603–1868) post stations. In addition to yakei based around illuminations and moon watching, people are starting to discover the beauties of onsen hot springs at night and the isaribi lights used to attract fish in the Japan Sea. There is a great profundity in the Japanese night. For those seeking the heart of the nation, the answer is perhaps somewhere in the darkness. 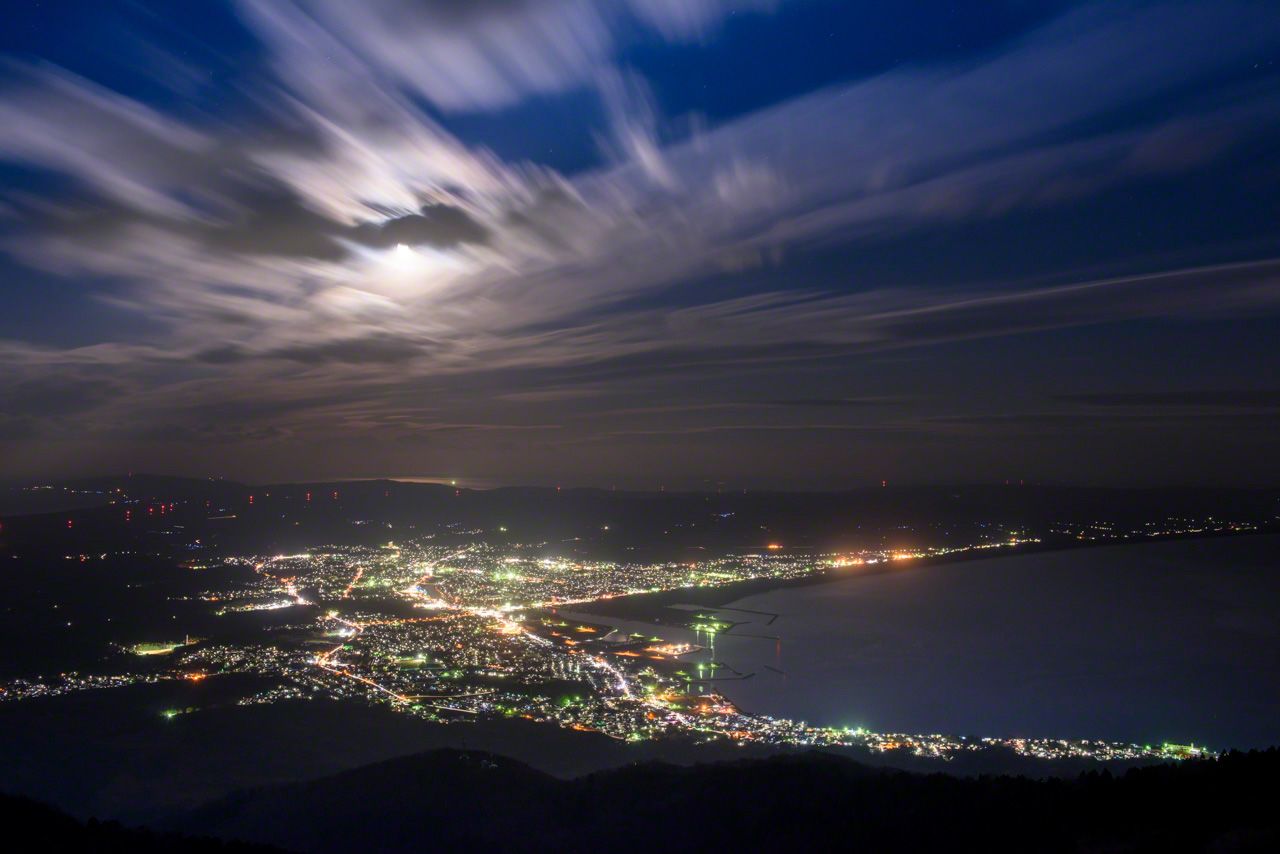 Lights in the city of Mutsu form the shape of a swallowtail butterfly. Viewed from the Kabuseyama observation deck (Aomori Prefecture). 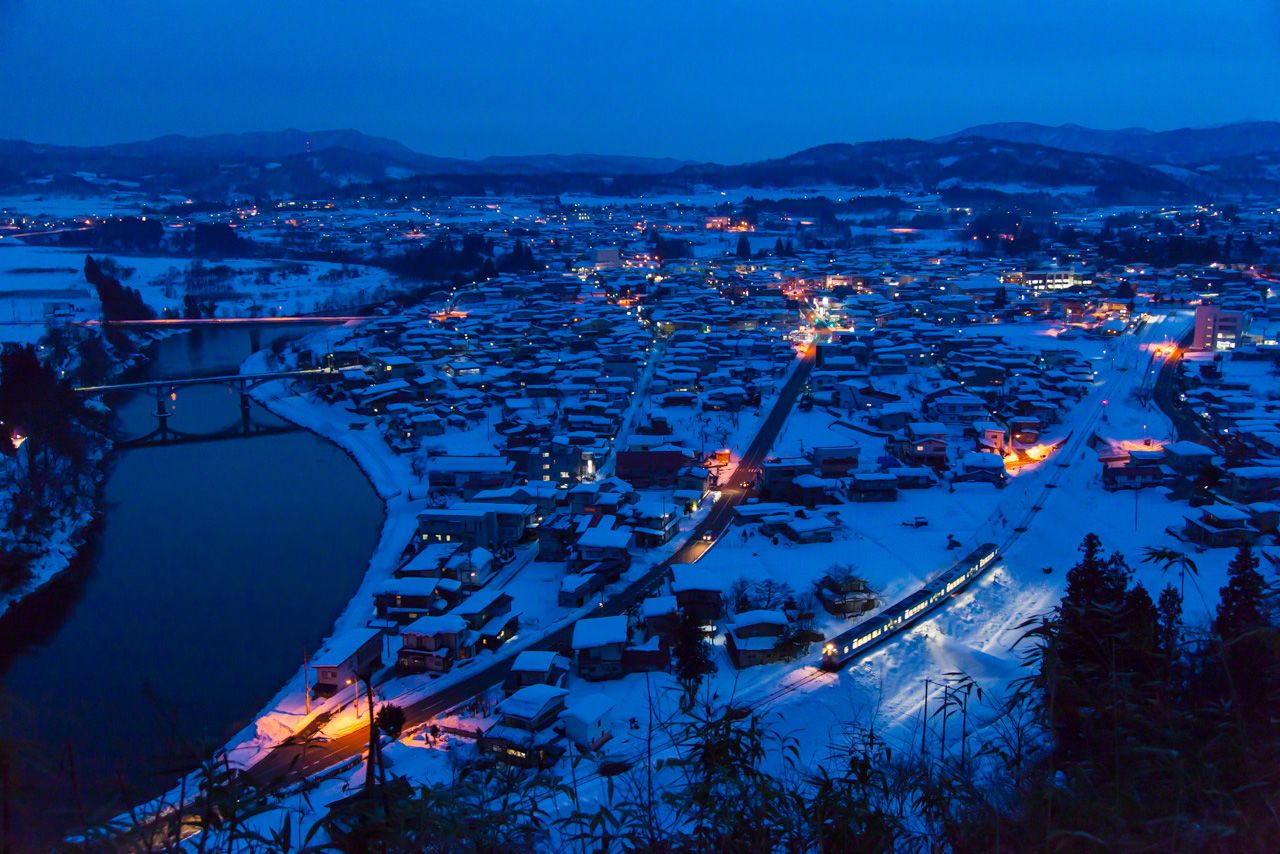 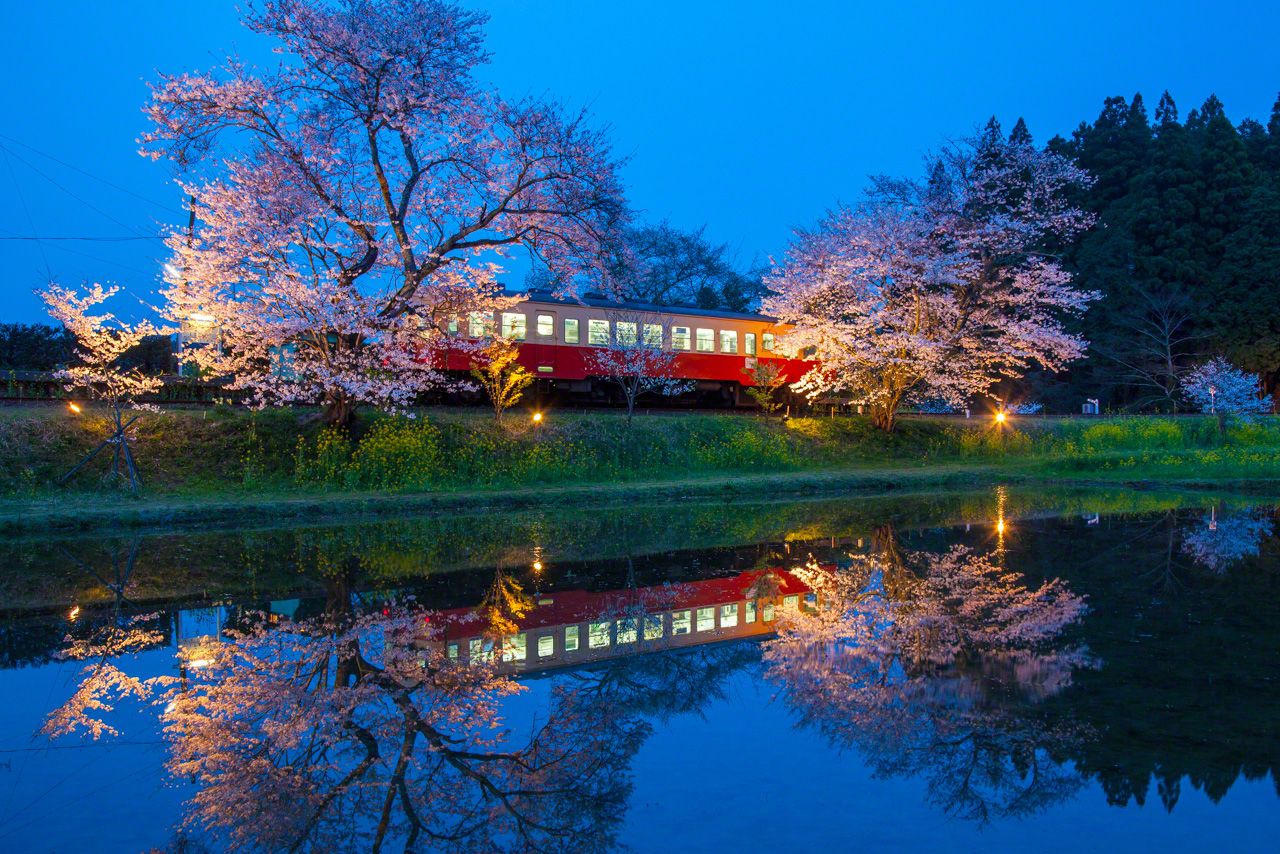 Cherry blossoms lit up at Itabu Station on the Kominato Line (Chiba Prefecture). 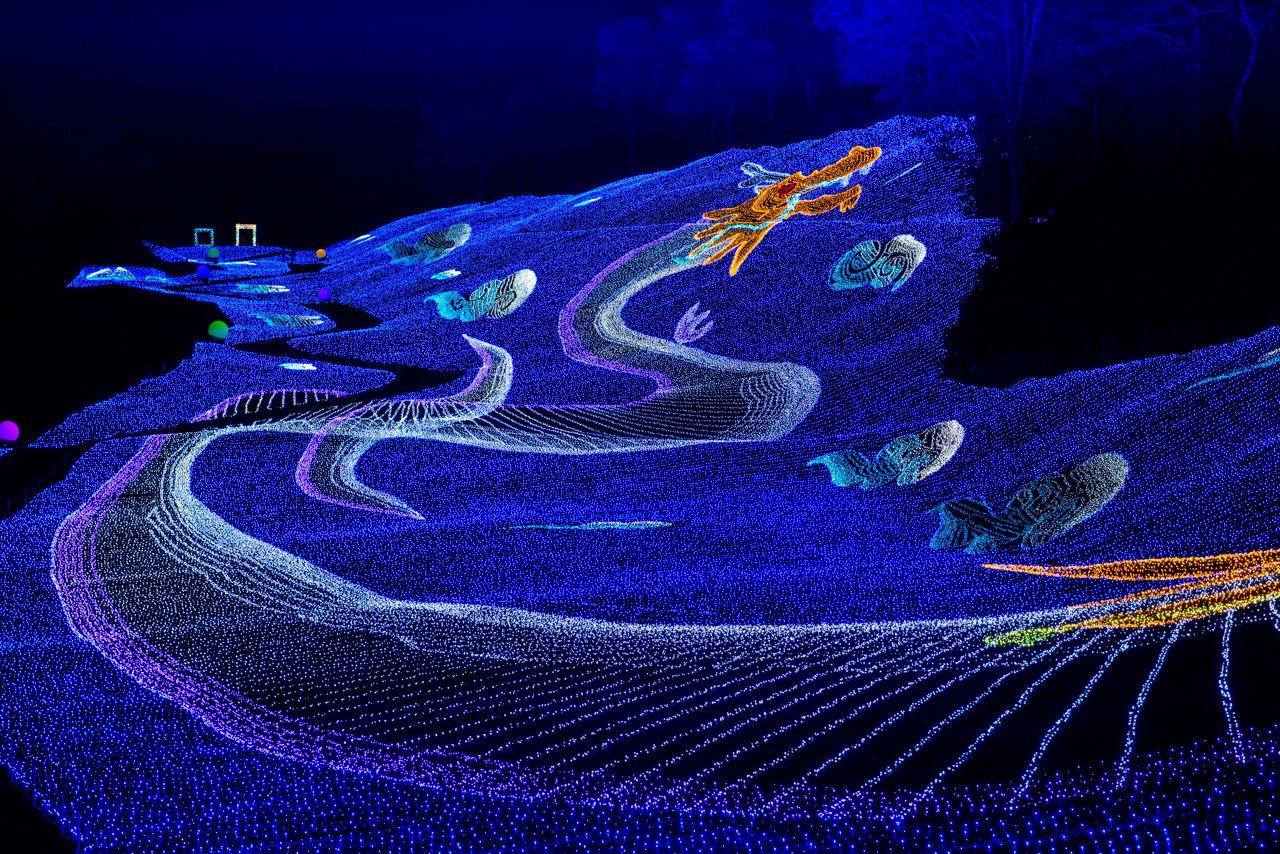 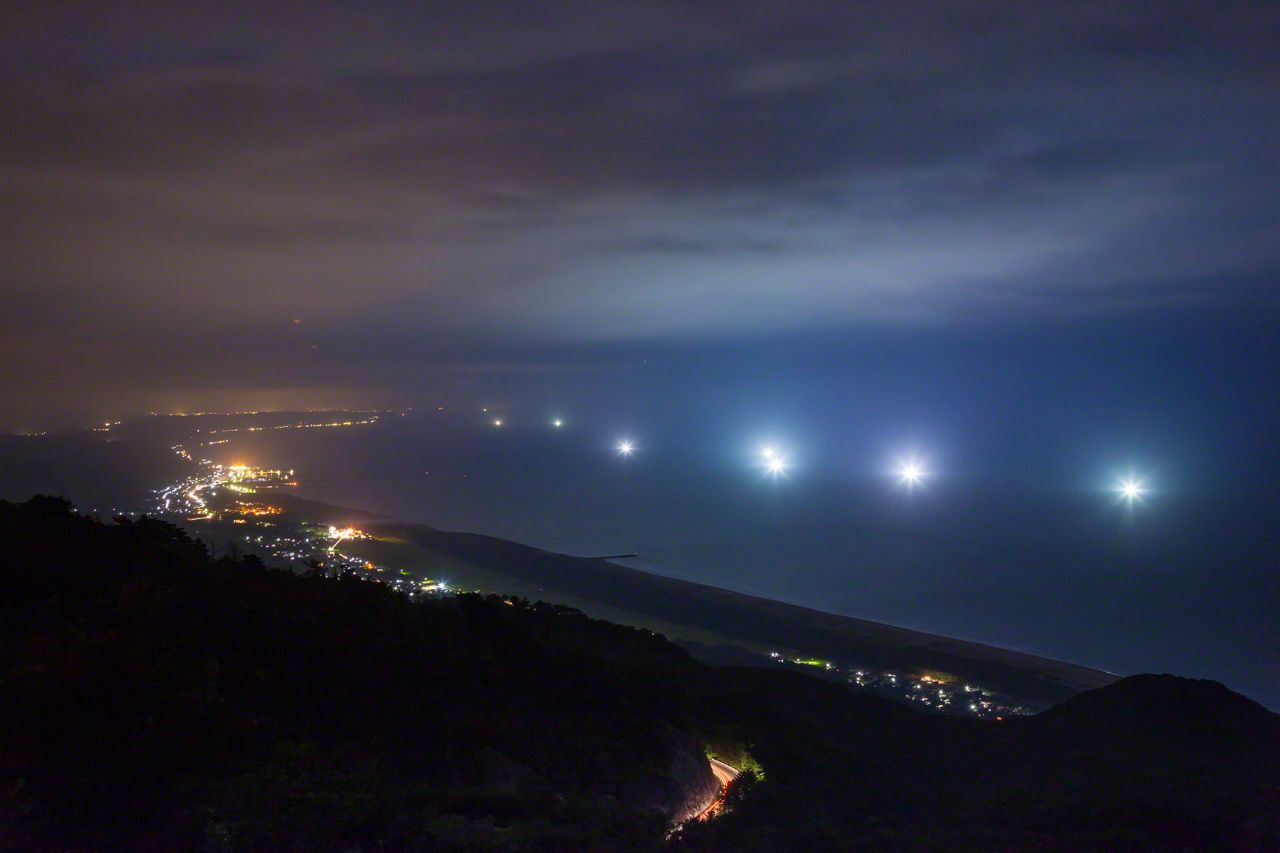 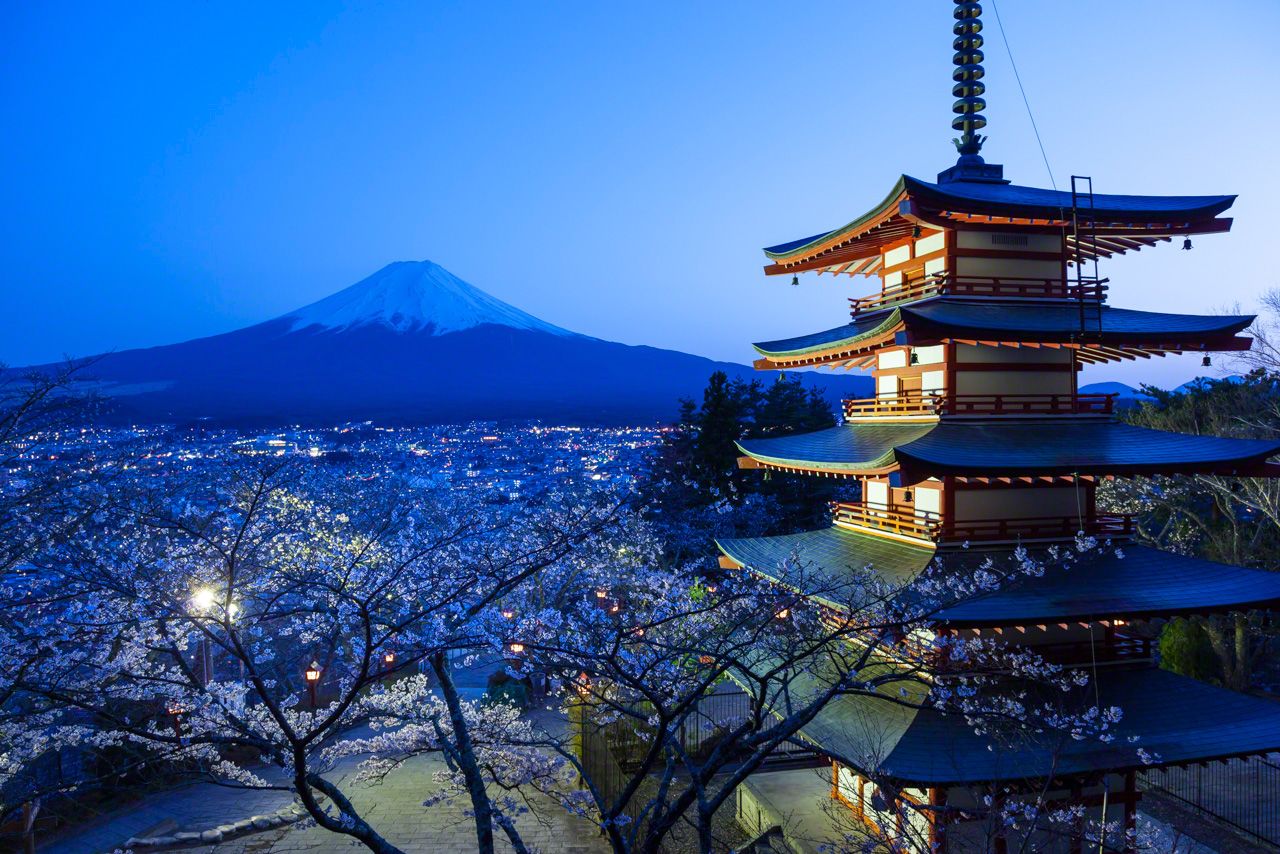 A pagoda in Arakurayama Sengen Park and Mount Fuji in the background (Yamanashi Prefecture). 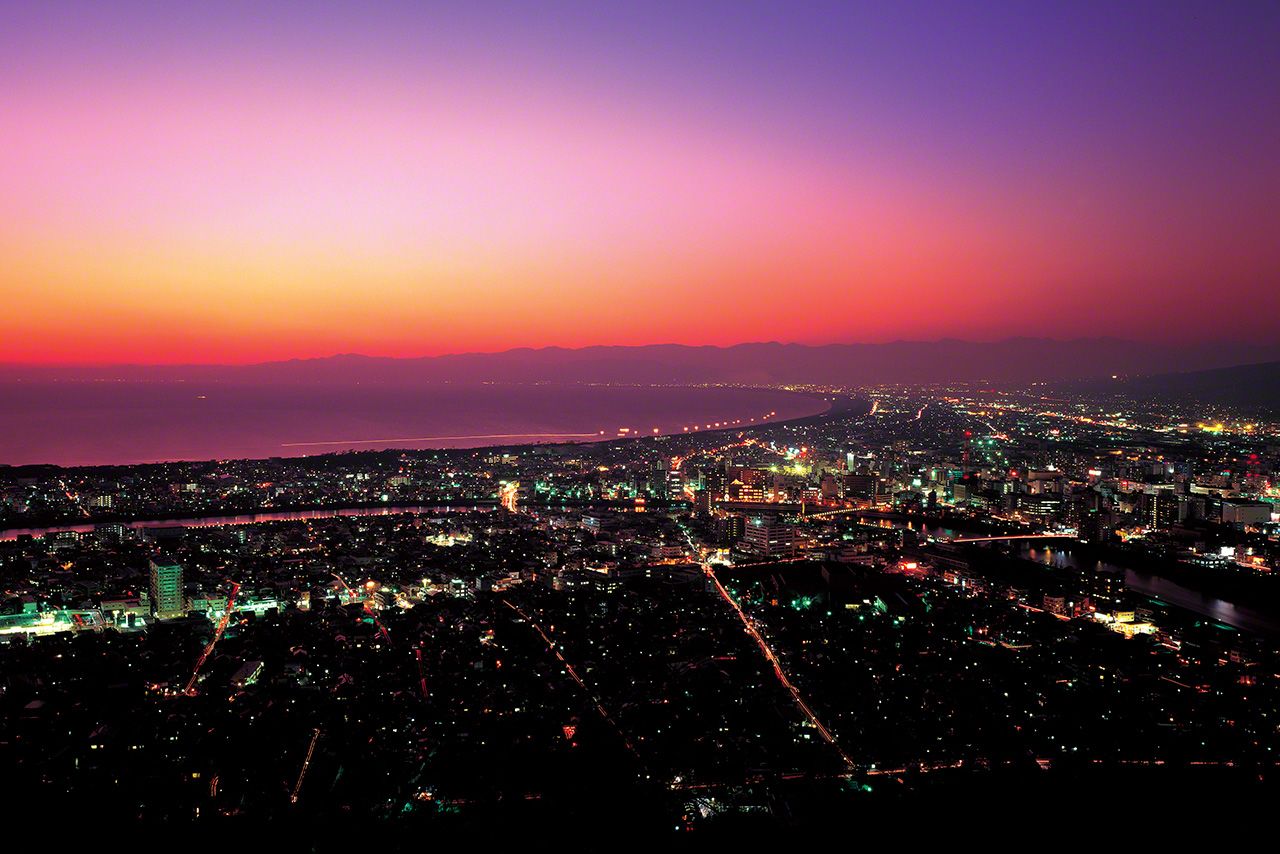 The city of Numazu and Suruga Bay viewed from Kanukiyama (Shizuoka Prefecture). 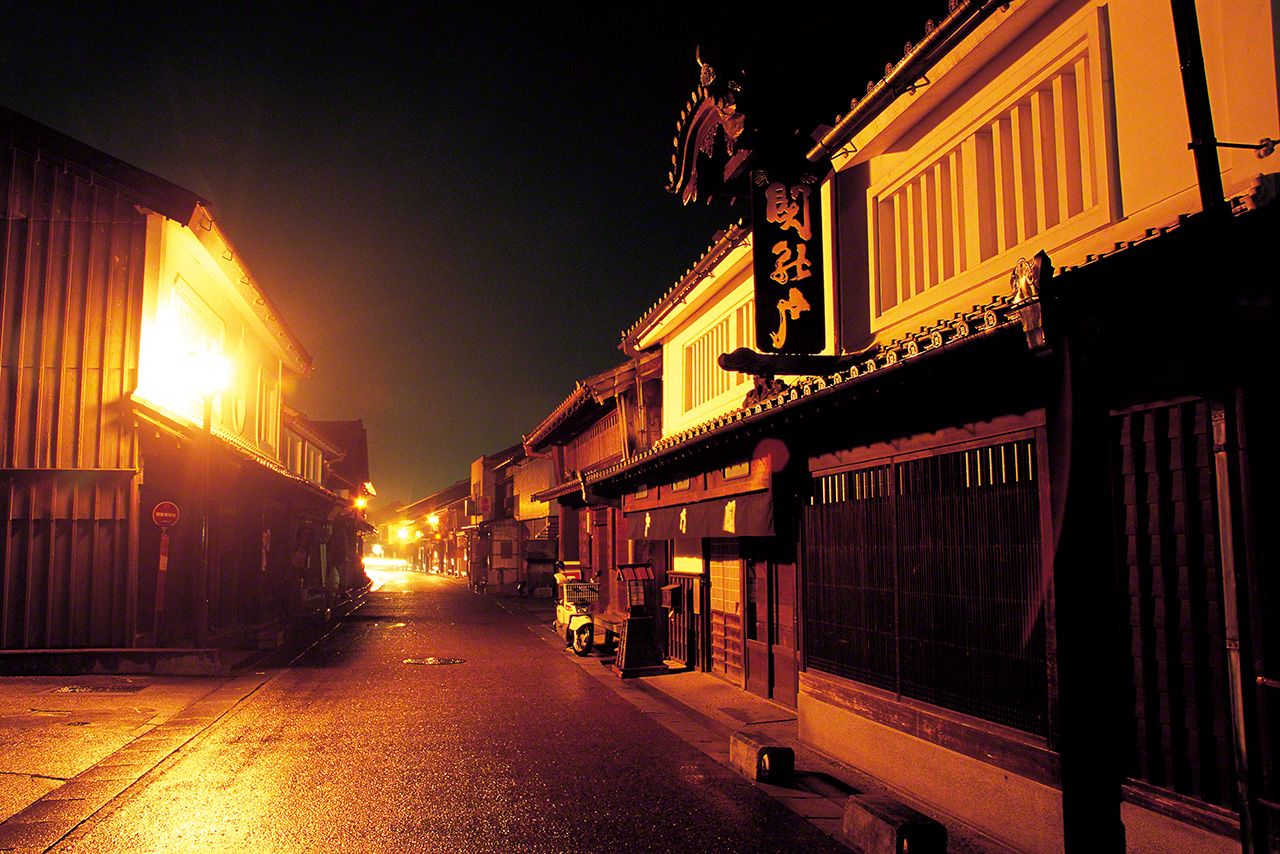 Sekijuku, one of the 53 post stations along the Tōkaidō Road (Mie Prefecture). 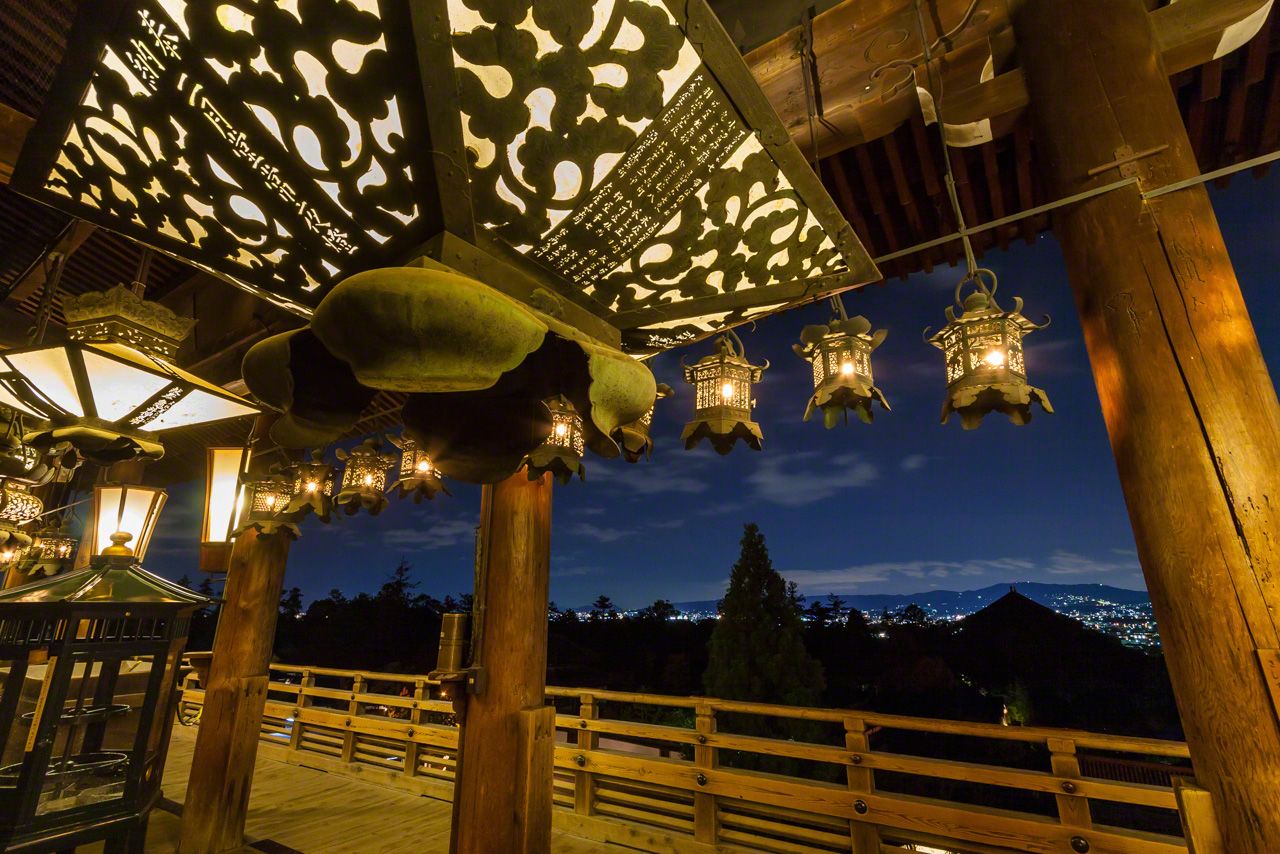 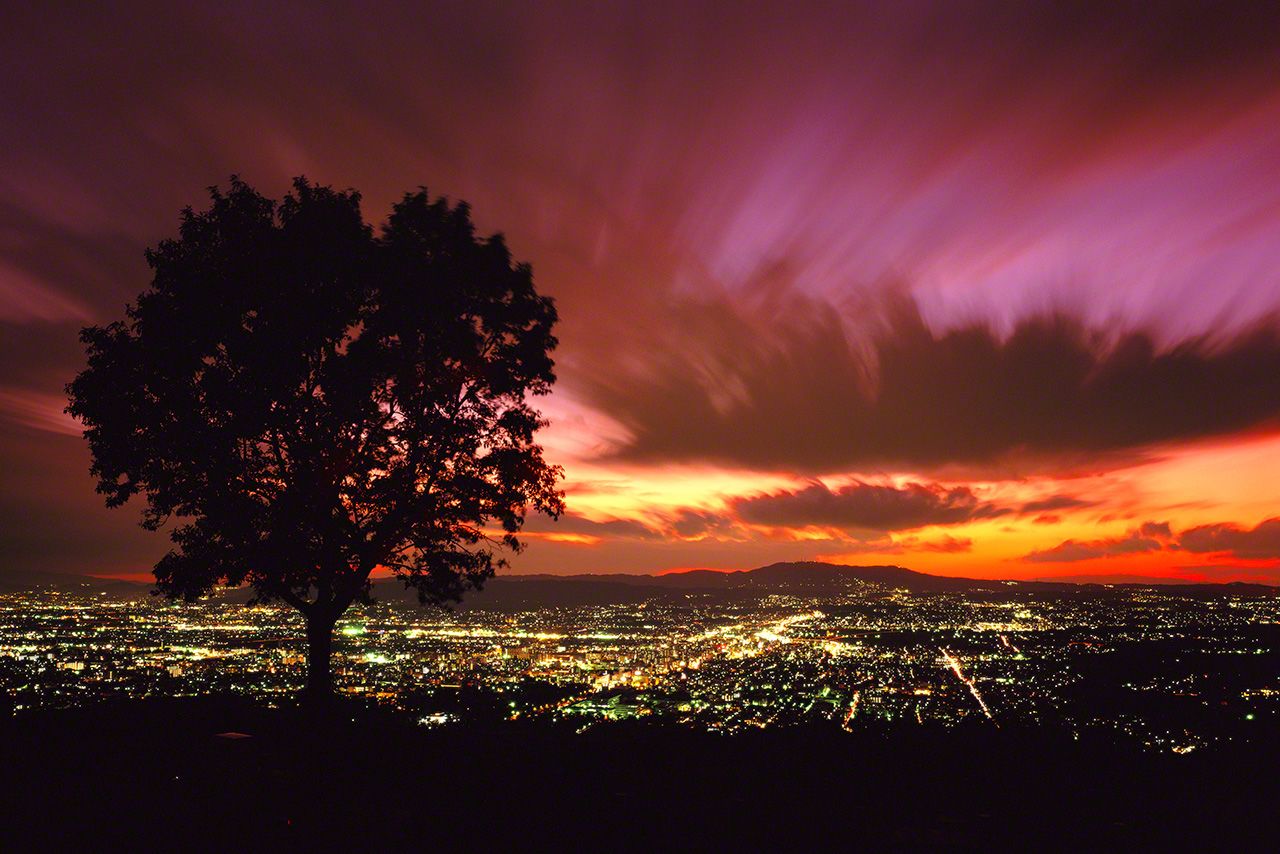 The city of Nara viewed from a Wakakusayama observation deck (Nara Prefecture). 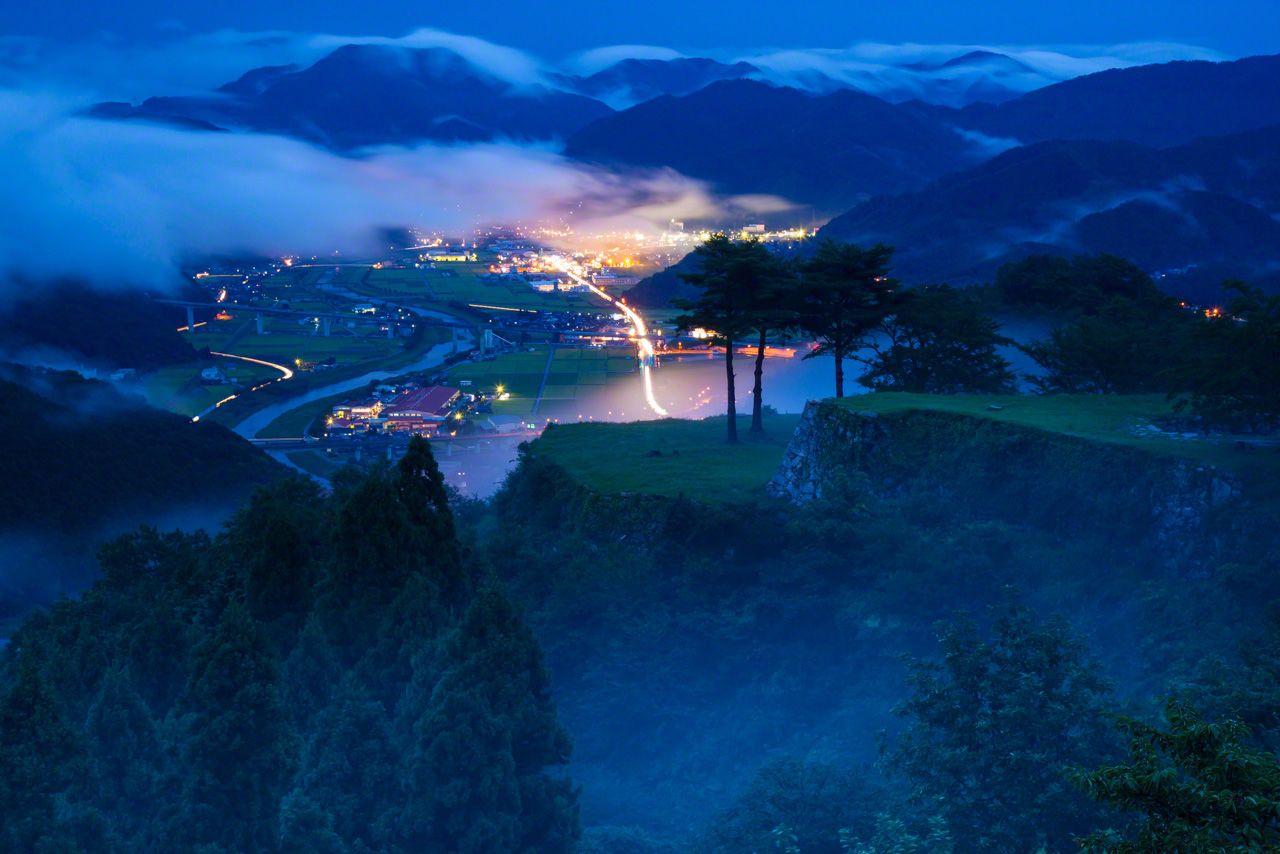 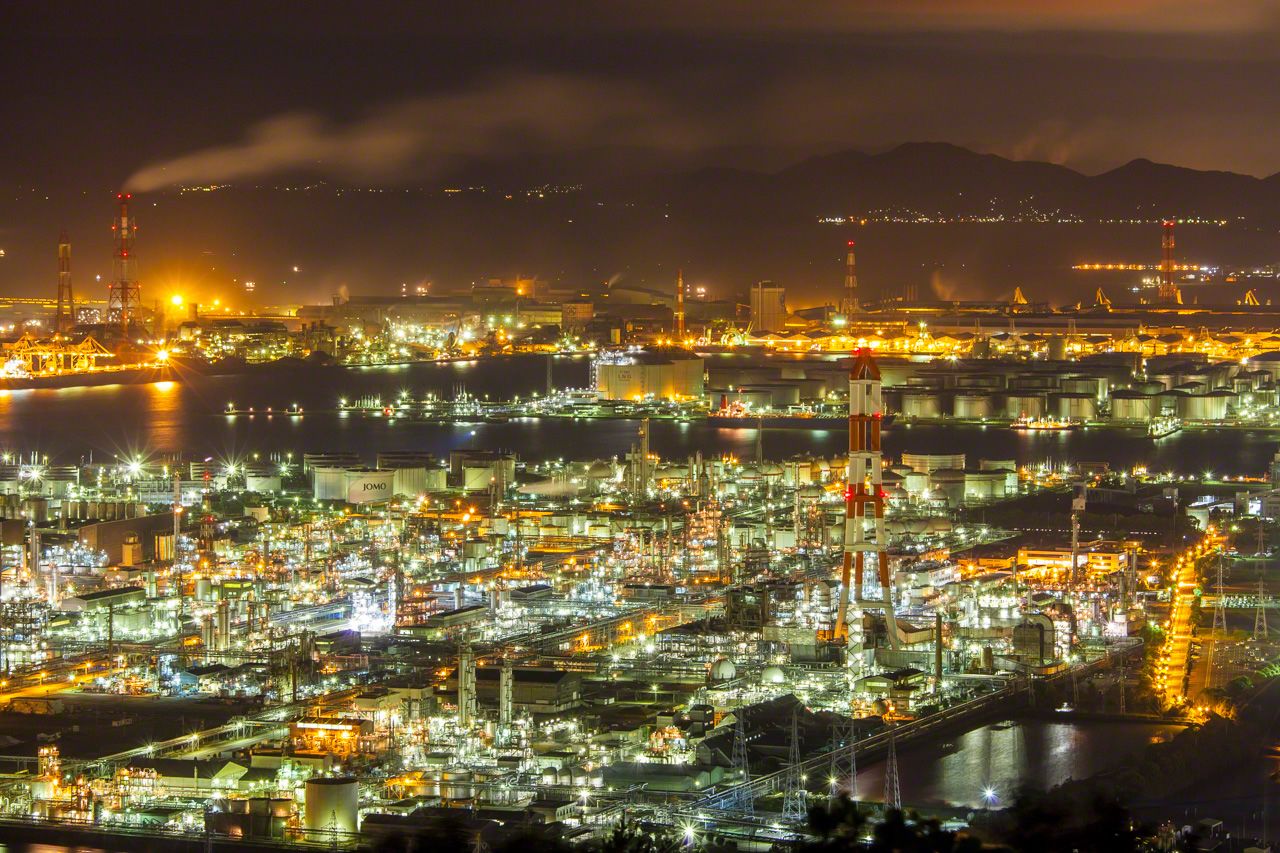 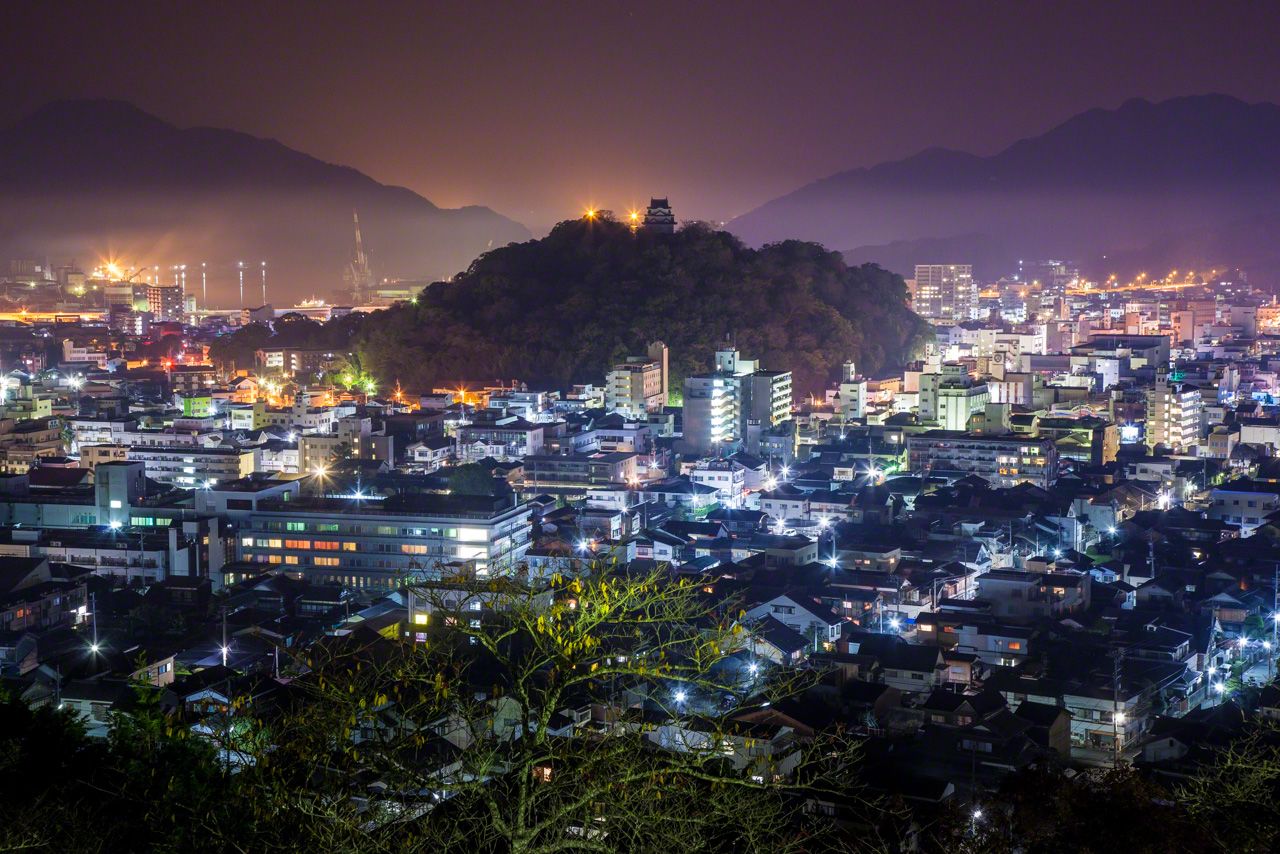 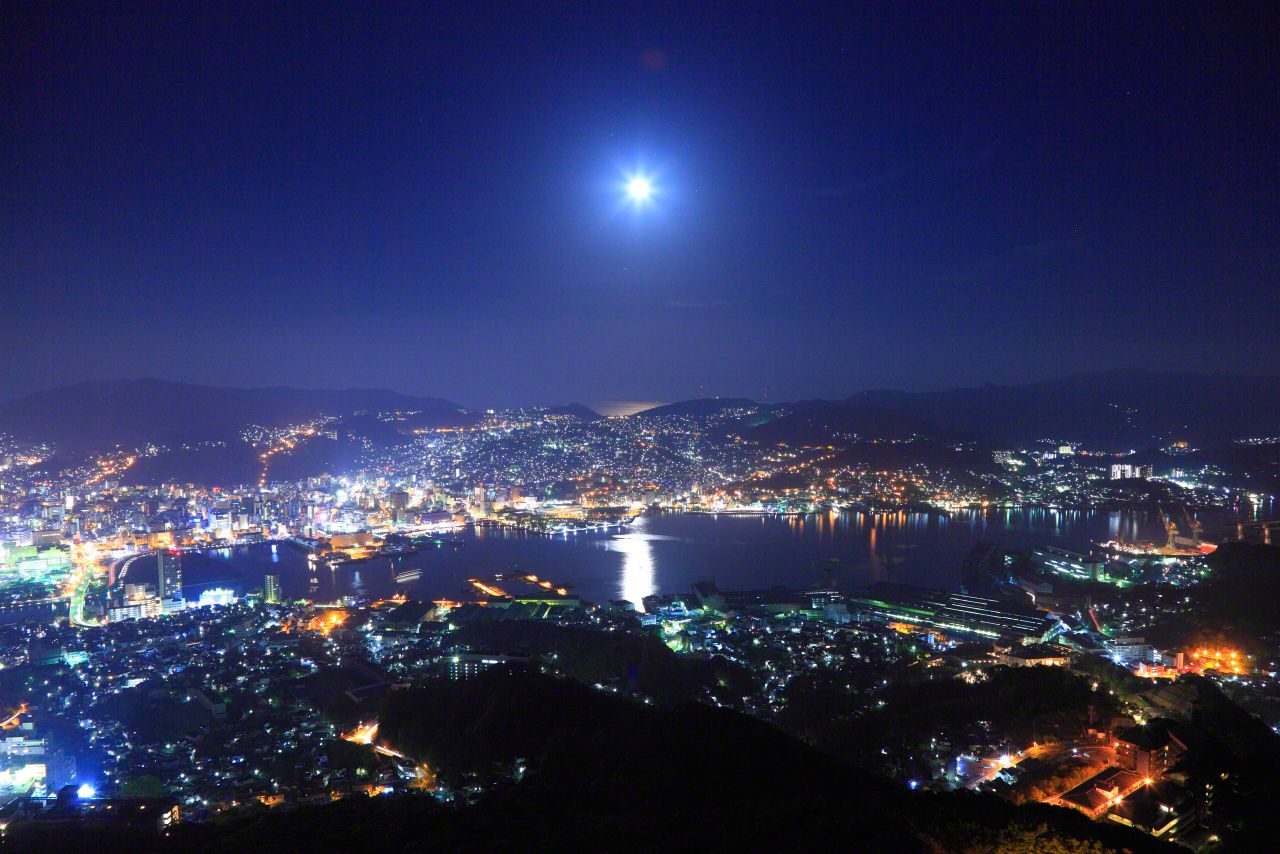 The full moon over Nagasaki and a moonlight “path” across the harbor viewed from an Inasayama observation deck (Nagasaki Prefecture). 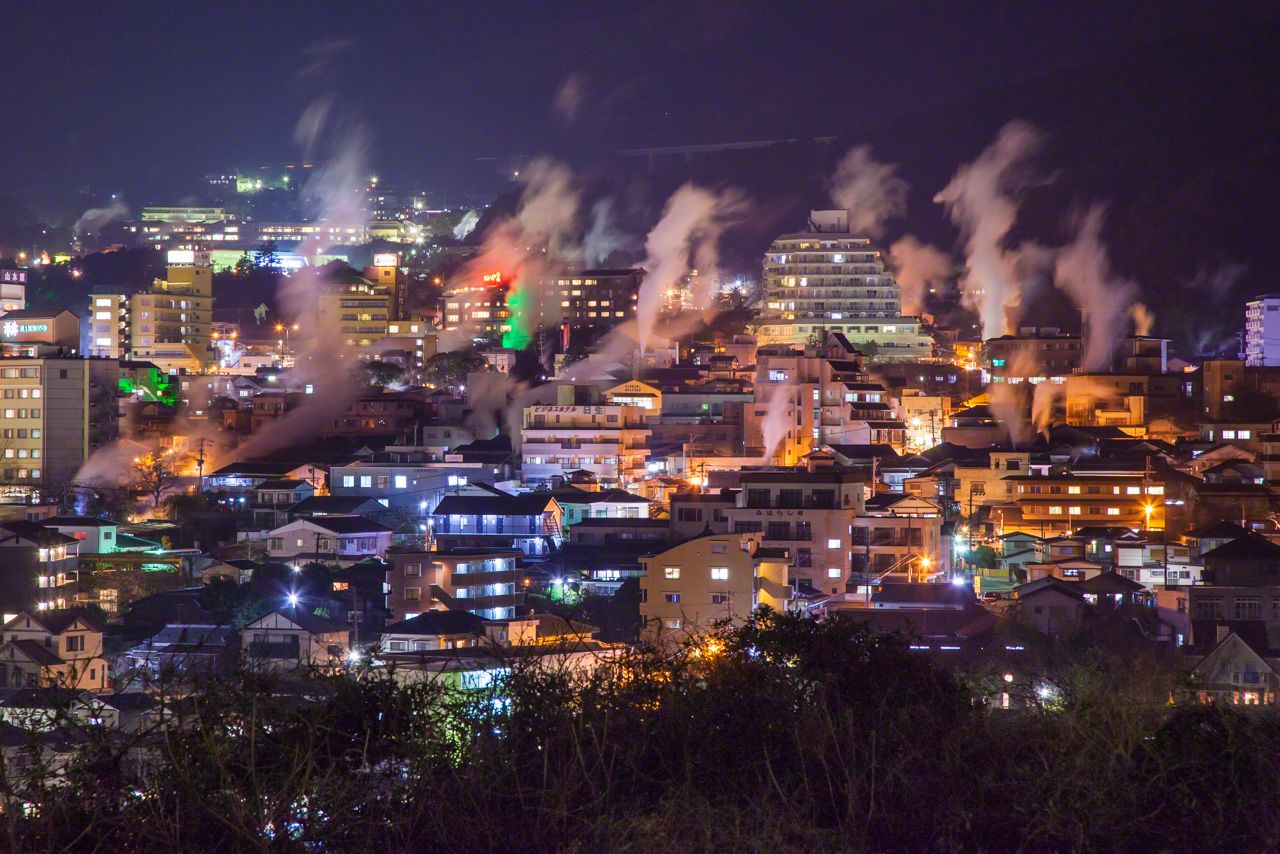