Culture Dec 2, 2016
A look at the rise of Shinkai Makoto, the anime director whose latest film Your Name has become a record-breaking hit. The second of a two-part series.

Following His Own Muse

From his earliest years, Shinkai Makoto was a filmmaker who liked to do everything himself. In this sense, he is quite unlike his contemporary Hosoda Mamoru, who began his career in a studio setting and became something of a standard-bearer for the collaborative tradition of animation filmmaking. The character of the two men’s work is different, too. While Hosoda’s work is entertainment-driven, Shinkai has sought to produce distinctive work that maximizes his personal vision as a director.

Shinkai began his career producing animated sequences for a computer game developer. From there he started to make his own short animations. In 2000, he won the CG Animation Contest grand prix for the short film Kanojo to kanojo no neko (She and Her Cat), which is four minutes and four seconds long. In 2002 he released his commercial debut, the thirty-minute Hoshi no koe (Voices of a Distant Star), which had a limited theatrical release before coming out on DVD. Shinkai attracted attention by doing almost everything himself—not just directing the film and writing the script, but also working on the drawings, artwork, computer 3D graphics, filming, editing, and voices. The film was a substantial hit and featured on the front covers of several anime magazines. As the new century began, Shinkai’s arrival seemed to mark the beginning of a new age in Japanese animation. 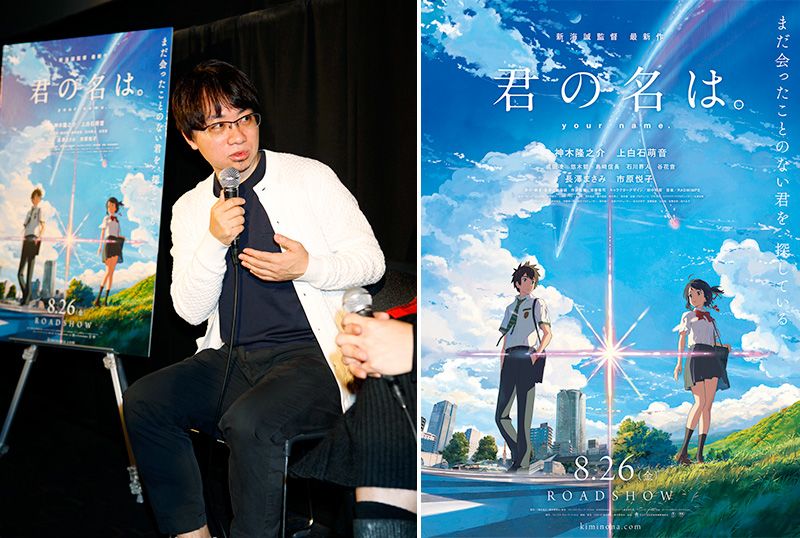 Director Shinkai Makoto is interviewed after a screening of Your Name at the 2016 Tokyo International Film Festival. Next to him is a promotional poster used when the film was released in Japan this summer. (c)2016 TIFF

Child of the Digital Age

Shinkai’s work has been shaped by the digital revolution. This swept through the entire anime industry at the end of the twentieth century and by 2002 the bulk of commercial anime production had completed the switch. The anime production process is now almost totally digital, and computers are used for coloring, filming, and editing. The only surviving analogue elements are the drawings and backgrounds created by hand.

As animation tools became cheaper, the gap between pros and amateurs disappeared. In fact, there is nothing remotely amateurish about the quality of the images in Voices of a Distant Star. Although you could perhaps point to lingering traces of immaturity in some aspects of the character depiction, the director’s handling of scenery and mechanized robotic warfare repaid close attention. The Internet also helped to spread a film’s reputation much faster than had ever been possible in the age of print media, while the influence of DVDs and similar media also peaked around this time, dramatically increasing the number of fans who would buy a work on DVD and watch it multiple times. Together, these little developments became a huge wave of change. With exquisite timing, Shinkai Makoto was able to ride and even expand this wave.

At the time many anime critics, myself included, expected that we would see a steady succession of young filmmakers following Shinkai’s example by doing everything themselves. But this is not what happened. Even today, such directors have not become a major presence in the market. Particularly since online video streaming became mainstream in around 2006, it has been extremely difficult for independent anime directors to make their work commercially viable. 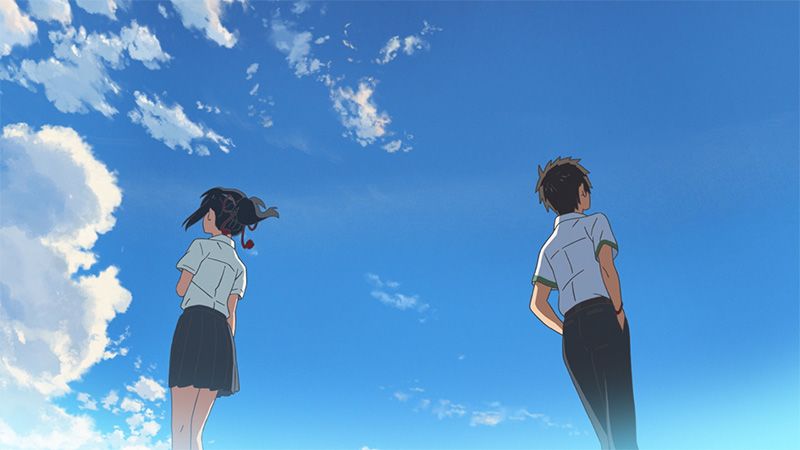 A scene from Your Name. Drifting clouds and shifting patterns of light often play an important role in Shinkai’s films. (C)2016 Your Name Film Partners.

The fact that no wave of do-it-yourself filmmakers has yet emulated Shinkai’s success makes it clear that there was more to Voices of a Distant Star than Shinkai handling everything himself. Even so, it seems likely that this approach was ideally suited to Shinkai’s introspective preoccupations: the nature of loneliness and the possibility of meaningful connections between human beings.

One of the dominant themes of Voices of a Distant Star is the extent to which two people can remain close thanks to text messaging even though they are physically apart. The pain of being unable to meet face-to-face also runs through Byōsoku 5-senchimētoru (Five Centimeters per Second, 2007) and his latest work, Kimi no na wa (Your Name). Although treated in different ways, the central concern remains the same. It is this core emotional element of his work that holds audiences spellbound. Shinkai’s debut had such a dramatic effect in 2002 for the way it approached people’s anxieties head on, sparking a strong sense of recognition and empathy in many viewers.

When email itself was still relatively new, Shinkai’s film shone a new light on the classic and universal problem of human distance, considering it from within the maelstrom of a digitizing world. Audiences were astonished that Shinkai was creating all these images himself, and felt a sense of closeness to him.

Shinkai’s characters do not usually express their emotions directly and he does not write scenes of simple action and reaction. Instead, emotions are conveyed through the overall mood of the film: in the scenes of beautifully shifting clouds in the sky, in the subtly shifting changes of light, in poetic monologues, and in the music that plays continually through the films. Another distinguishing feature is that although many of the films are love stories, there are very few scenes in which the two main characters appear together or in physical proximity. Decisive moments are also rare. This means that audiences are free to put their own thoughts and feelings into the story. By relying on this kind of chemical reaction with the emotions of people watching, Shinkai’s films come close to poetry.

If things had gone differently, Shinkai might have continued to produce his films singlehandedly. From his second film—the 91-minute Kumo no mukō yakusoku no basho (The Place Promised in Our Early Days), released in 2004— however, he shifted to a new approach. While maintaining his independent stance and keeping a distance between himself and the mainstream anime industry, he started to make films in partnership with a selected team with whom he shared a basic sensibility. The Place Promised in Our Early Days had a stronger science fiction flavor, and was set in a more elaborately worked fictional “world” than Shinkai’s previous films. In 2007’s omnibus short Five Centimeters Per Second, by contrast, he returned to the subject of unexpressed emotions using a thoroughly realistic setting and subject matter.

In 2011, Shinkai released Hoshi o ou kodomo (Children Who Chase Lost Voices), a dark fantasy. In its Ghibli-style depiction of character, the film seemed to suggest that Shinkai was ready to take on the major studios, and many felt that this went against Shinkai’s individual style as a filmmaker. Following this attempt to find a new direction, in 2013 he released the 46-minute film Kotoba no niwa (The Garden of Words). This was the definitive expression of his method of depicting emotions through scenery. Water is a powerful presence in the film. Shinkai depicts with remarkable control numerous images of glistening plants dripping with moisture during the muggy rainy season in the lead-up to summer. The transparency of the water symbolizes the purity of interactions between the main two main characters, a female high school teacher and a boy student. The film movingly evokes the sense of feelings that cannot be put into words.

Your Name: The Encapsulation of the Shinkai Style

Shinkai’s latest work, Your Name, released in 2016, was apparently conceived on the idea that it would be a kind of “best of” compilation of everything that makes the director’s films distinctive (to use the words of Kawamura Genki, a Tōhō producer). The film brings together the lessons of over a decade, from the beautiful scenery symbolizing the innocent spirit of adolescence, to the well-judged matchup between the music and the rhythmically shifting images onscreen and the fusion of traditional Japanese aesthetics and fantasy. It seems to include all the elements anyone could have asked for from a Shinkai production. 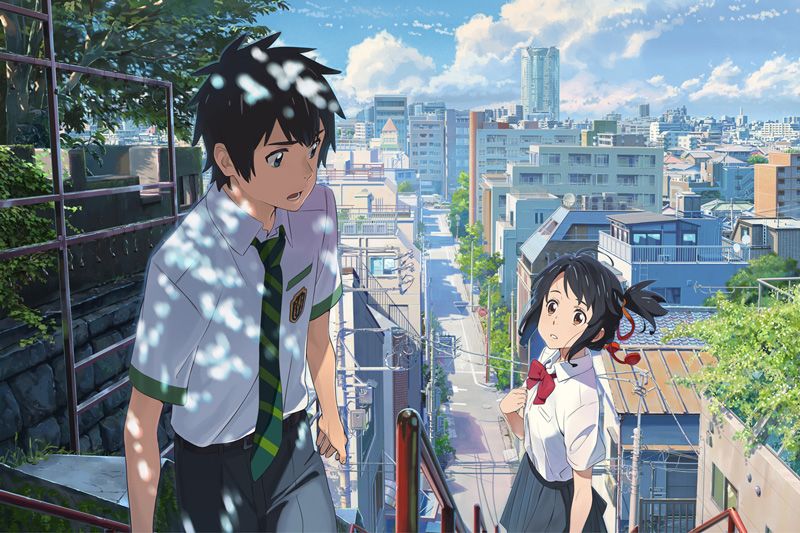 The final scene of Your Name, when the two main characters come together at last. (C)2016 Your Name Film Partners.

The film shows signs of a deliberate effort to underline its credentials as a work of entertainment. The change of tone in the film is also impressive, starting out with comedic touches before shifting to depict the bitter struggles of two people torn apart by time and space.

Many of the film’s production staff have illustrious careers of their own. These included Tanaka Masayoshi, known for his character design work on TV shows like Toradora and Ano hi mita hana no namae o boku-tachi wa mada shiranai (Ano Hana: The Flower We Saw That Day) and Andō Masashi, whose previous work includes stints as supervising animator on Studio Ghibli hits like Princess Mononoke and Sen to Chihiro no kamikakushi (Spirited Away). The film therefore brings together all the chief elements of cutting-edge anime filmmaking in Japan today, combining the DIY approach of an individual filmmaker with late-night TV anime and the traditions of Studio Ghibli. That it managed to pull this off without diluting the individual qualities that make Shinkai’s work unique was a remarkable achievement.

Since The Girl Who Leapt Through Time (2006), Hosoda Mamoru has gradually stepped up the complexity of the subject matter of his films, unlocking new possibilities through his art. Perhaps Shinkai’s work will follow a similar trajectory in the years ahead. If the phenomenal success of his latest film is to be found in his decision to open it up to a wider sense of time and space, then we may see him continuing to blaze a trail and unlocking new horizons in his work in the future, even while he maintains his trademark style .

Although Hosoda Mamoru began his career in a major studio and Shinkai Makoto started from an indie background before hitting the big time, they are both alike in the sense that they have always looked to create anime that will appeal to both the eyes and hearts of audiences. Both will surely continue to reveal to us wider worlds as artists and filmmakers in the future. I hope that their ambition and openness to new challenges will bring new attention and respect to anime as a whole in the years to come.