Is There Life After Relocation? The Future of Tsukiji Fish Market

Society Mar 30, 2016
Tokyo’s huge Tsukiji fish market has spawned a vast “food city” that draws tourists from all over the world. But what will happen to the bustling Outer Market when Tsukiji’s wholesale operations—including the famed tuna auctions—move to Toyosu in the east of the city in November?

It is still 3:00 in the morning and bitterly cold as groups of foreign tourists begin appearing near a bridge along the Sumida River in central Tokyo. Some arrive by cab from their hotels, while others arrive on foot. Quietly, at first, they begin lining up in front of a small two-story building.

As the crowd grows, excited conversation fills the air, punctuated by a handful of English, Chinese, and other phrases—tuna auction . . . bluefin tuna . . . Zhudi Shichang [Chinese for Tsukiji Market]. From all over the world, tourists have gathered here in the wee hours for what may be their last chance to witness the world-renowned Tsukiji tuna auction. After more than eight decades at this historic location, the world’s biggest fish market will be relocating to Toyosu in the east of the city in November 2016.

The Tokyo Metropolitan Central Wholesale Market, commonly known as the Tsukiji Market, is conveniently located near the heart of the capital, about 10 minutes on foot from Ginza. While best known for the astonishing selection and quantity of its fish and other marine products, it also handles a large amount of fresh produce. In addition, it serves as the anchor for a vast “food town,” a booming commercial district filled with restaurants and specialty shops selling gourmet foods, kitchen wares, and more. As interest in Japanese cuisine has grown in recent years, Tsukiji has developed into a major international tourist attraction.

One of the big draws at Tsukiji is the tuna auction that starts between 5:00 and 5:30 am. With only 120 spectators admitted into the auction area each day, tourists begin lining up more than two hours in advance in order to secure a slot. Afterward, they typically shop and dine in the so-called Tsukiji Outer Market before dispersing to other tourists spots, including Ginza, Asakusa, and the Imperial Palace.

In addition to the long-established sushi restaurants located within the Inner Market, newer restaurants and gourmet shops have flocked to the adjacent areas in recent years, drawn by the central location and the district’s growing popularity among foreign and domestic tourists alike. Just being able to include Tsukiji in one’s name or advertising is a major advantage in terms of branding.

The Sushizanmai chain exemplifies this phenomenon. Owner Kimura Kiyoshi, who opened his first shop in the Outer Market in 2001, has skillfully leveraged the Tsukiji brand, especially the publicity surrounding the first tuna auction of the year. In 2013, he paid an astonishing ¥155.4 million for a 222-kilogram bluefin. Today, the chain has more than 50 restaurants around Japan, and the original Tsukiji store (open 24 hours) is busy at almost any hour of the day. (It is also one of the few sushi restaurants that advertise on television.)

The idea of relocating the Tsukiji Market first came up for serious discussion in 1998. Originally, the market’s operators and vendors had hoped to rebuild the facility on its current site, but the economic and technical obstacles proved insurmountable.

Back in the 1930s, when the current Tsukiji Market was designed and built, seafood was shipped around the country by boat or train, and the volume was a fraction of what it is today. Nowadays, the market sells about 450,000 tons of marine products annually, including seafood brought in by air freight from all over the world. It also handles some 290,000 tons of produce, almost all of it transported by truck. The volume of goods shipped in and traded has long since surpassed what the current site (230,000 square meters, or about a fifth of a stadium like Tokyo Dome) can efficiently handle. Meanwhile, the market’s aging facilities have deteriorated, in some cases to the point where they pose a hazard.

Relocation is a rational, forward-looking approach to these issues. But the initiative has traveled a long and tortuous road to reach this point. It has met with fierce resistance from merchants, particularly those in the Outer Market, who have profited greatly from the Tsukiji brand and their proximity to the Inner Market. Implementation was further delayed by the discovery of chemical contamination at the proposed building site in Toyosu, a piece of reclaimed land about three kilometers to the south.

Kimura Kiyoshi of Sushizanmai has thrown his whole-hearted support behind the relocation plan, and had even hoped to give it a major boost by investing in a large-scale retail facility near the new market. Although he was recently forced to abandon the project in the face of practical obstacles, he remains committed to the cause of building a new “outer market” adjoining the Toyosu site. In a recent interview in Harbor Business Online, Kimura stressed that Tsukiji’s unique appeal lies not just in the unparalleled quantity and variety of fresh fish sold by its wholesalers but also in the synergy of the inner and outer markets. “We need to build a new ‘outer market’ in Toyosu to make the relocation a success and enhance the image of Tokyo and Japan all around the world,” he said.

Not everyone shares his enthusiasm. As recently as February this year, an alliance of consumer groups, women’s organizations, and labor unions submitted an open letter of protest to the governor of Tokyo, citing soil and water pollution at the new site, along with logistic and traffic issues.

But the Tokyo Metropolitan Government is standing firm. Plans are proceeding for the reopening of the wholesale fish market in Toyosu on November 7 this year, and Tsukiji’s stakeholders are anxiously preparing for life after relocation. 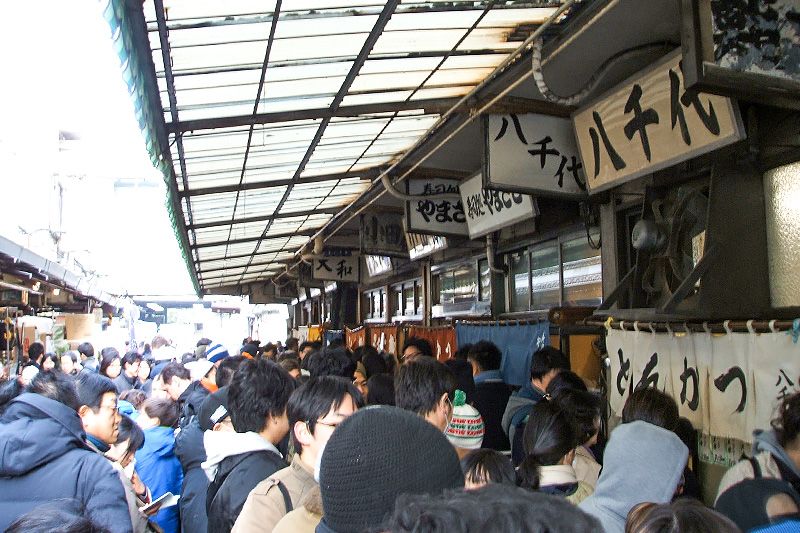 Tourists sometimes wait three hours to be seated at one of the famed sushi shops in Uogashi Yokochō, the retail section of Tsukiji’s Inner Market. These restaurants will be moving to Toyosu in November along with the market’s wholesale operations.

The Outer Market is integral to Tsukiji’s broad popular appeal. This large shopping district to the east of the wholesale market features some 500 establishments, mostly restaurants and shops specializing in food, cookware, tableware, and the like.

But the relocation plan does not include the Outer Market. Accordingly, the area’s merchants are taking proactive steps to ensure that the Outer Market continues to thrive as a commercial district after relocation. The new Tsukiji Nippon Gyokō Shijō (Tsukiji Japan Fishing Port Market) opened for business in October 2014 in a low-rise building between the inner and outer markets. It offers a wide selection of fresh fish and other marine products, including hard-to-find local delicacies shipped directly from fisheries around Japan, from Hokkaidō in the north to Kyūshū and Shikoku in the south.

A new fish market at Tsukiji offers hard-to-find local delicacies shipped directly from fisheries all over the country.

Meanwhile, an association of Outer Market merchants that previously campaigned against the move (Tsukiji Shoku-no-Machi-zukuri Kyōgikai/Tsukiji Jōgai Shijō Shōtengai Shinkō Kumiai, chaired by Suzuki Akio) has decided to channel its resources into the development of a new wholesale fish market geared to industry professionals, such as chefs and seafood retailers. With support from the Chūō municipal government, the new market, dubbed Tsukiji Uogashi (Tsukiji Fish Pier), will open on October 15, 2016 and feature about 60 wholesale vendors and distributors from the Tsukiji Inner Market. Like the aforementioned Tsukiji Nippon Gyokō Shijō, it will open its doors to wholesale and professional customers early in the morning and then welcome the general public after 9:00 am.

According to the Tsukiji Outer Market website, “The new facility [Tsukiji Uogashi], in combination with the famed establishments of the Outer Market, will create a new Tsukiji Market experience, where food industry professionals can shop with even greater care and efficiency than before, and consumers can take full advantage of the kind of selection only Tsukiji can offer.” The exterior of the new building has already taken shape, along with a pedestrian bridge to the Outer Market shopping area. 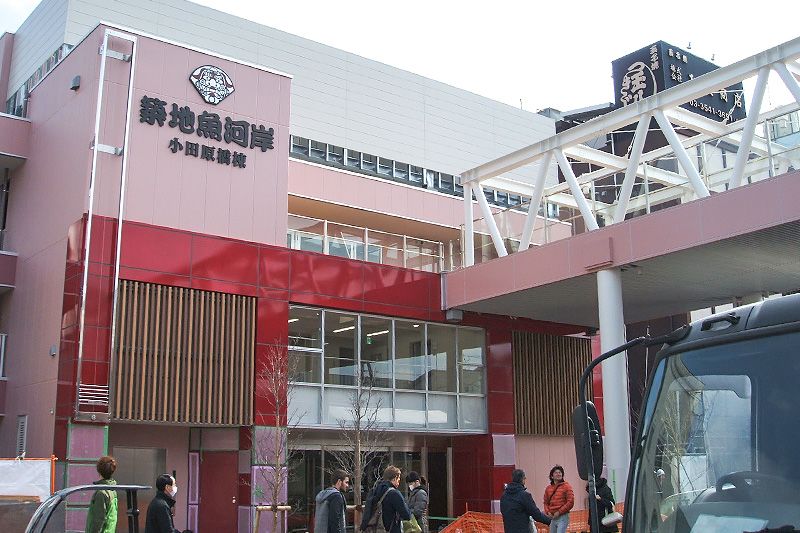 The new Tsukiji Uogashi wholesale fish market, currently under construction, is scheduled to open in October 2016.

Even so, some skeptics question whether the Outer Market can flourish severed from the matrix that nourished its growth. They point out that Nihonbashi was known for its distinguished top-quality sushi restaurants back in the early twentieth century, when the central fish market was located in that district. Today, few of those storied establishments remain. There are concerns that Tsukiji, too, will lose its magnetism as a food destination once the central wholesale market moves to Toyosu. 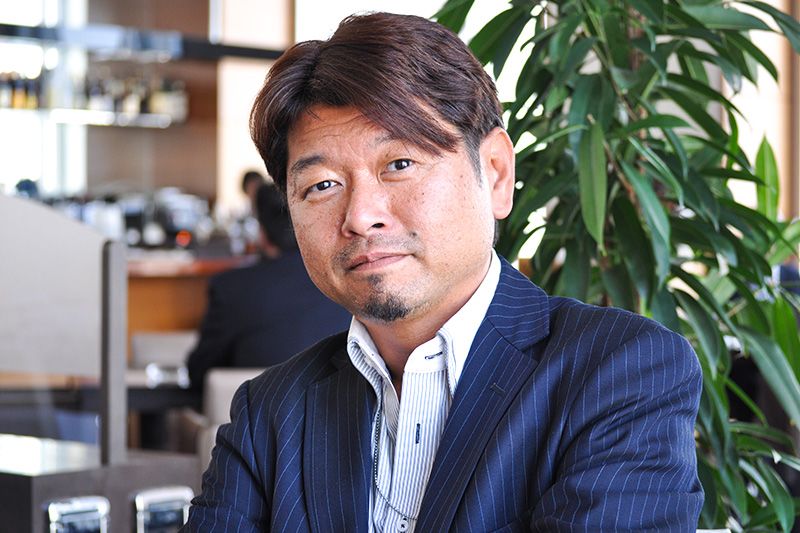 Kawamoto Daigo of Jiji Press has been writing about Tsukiji for 25 years.

Kawamoto Daigo, a journalist who has covered the Tsukiji beat for 25 years, thinks such fears are unfounded. “For the most part, when foreign or Japanese tourists think of Tsukiji, they’re thinking of the Outer Market,” he says. “I doubt that the relocation will cause much havoc.”

Kawamoto notes that Tsukiji has already secured a place in the popular imagination thanks to extensive media coverage and unprecedented interest in sushi, Japanese food, and fish in general. At the same time, he deplores the media’s superficial treatment of those subjects and hopes that “relocation will help launch a more serious discussion about marine resources in Japan and around the world.”

As early as December 2004, the city government of Chūō, which has jurisdiction over Tsukiji, had drawn up a concept for “maintaining Tsukiji’s dynamism and activity as a center of food culture after the relocation of the Tsukiji Market.” The document (“Vision for a Dynamic and Bustling Tsukiji Market District”) calls for exploiting the inherent attributes of the riverside site in the development of a new hub of international tourism highlighting Tokyo’s history as a city built around picturesque and practical waterways.

Until recently, the Tokyo Metropolitan Government has showed little inclination to take the development concept seriously. Instead it has alternately eyed and rejected Tsukiji as a site for such construction projects as an Olympic media center or new headquarters for NHK (Japan Broadcasting Corp.).

Realistically speaking, the site is likely to remain unoccupied for at least a decade to allow time for soil decontamination and an archeological survey. But there are signs that the TMG may be leaning toward Chūō’s bold vision. In an interview printed in the Mainichi Shimbun last January, Tokyo Governor Masuzoe Yōichi emphasized the site’s location along the Sumida River and the advantages of using waterways to improve access between the Toyosu market and Haneda Airport—though he hastened to point out that nothing had been decided. The newspaper has also reported that Tokyo officials are actively studying the possibility of developing the waterfront into a tourist spot equipped with tour boats and other attractions.

But for all the discussion of survival strategies for Tsukiji and the Outer Market, there is no getting around the gravitational pull of the Inner Market’s sushi shops, with their three-hour lines, or its bluefin tuna auctions, which draw international tourists to Tsukiji well before the crack of dawn. In November, the district will say goodbye to these legendary attractions, and how it will change in their absence is something no one can safely predict.

(Originally written in Japanese by Miki Takajirō of Nippon.com and published on March 17, 2016. Banner photo: Tourists line up outside the bluefin tuna auction area in the early hours of the morning. They need to arrive at least two hours before the auction starts to receive one of a limited number of vests handed out in lieu of spectator passes.)