Events to mark the seventieth anniversary of the end of World War II this August 15 (August 14 in Hawaii) will include a joint commemoration by Honolulu and Nagaoka. Sister cities since 2012, these Hawaii and Niigata municipalities share painful memories of the war. Honolulu was the site, of course, of the Japanese attack on Pearl Harbor on December 7, 1941 (December 8 in Japan), that inaugurated the Pacific hostilities. Nagaoka, meanwhile, suffered a horrific incendiary bombing on August 1, 1945, just before the end of the war.

The two cities will hold a shiragiku (white chrysanthemum) fireworks display at Pearl Harbor on August 14 at 8 p.m., local time. Their display, which will consist entirely of white fireworks, will honor the memory of those who died in the war and affirm a common commitment to peace.

A Sneak Attack and Merciless Reprisals

A fateful link in the wartime experiences of Honolulu and Nagaoka is the Japanese admiral Yamamoto Isoroku (1884–1943). Yamamoto, who served as commander-in-chief of the Combined Fleet that conducted the attack on Pearl Harbor, was a native of Nagaoka. Some historians have suggested that the August 1945 bombing of Nagaoka was more vengeful than strategic in nature.

The Japanese attack on Pearl Harbor, carried out before Japan issued a declaration of war, claimed more than 2,400 lives. The US bombing of Nagaoka took more than 1,400, including civilians incinerated in rice paddies where they had fled. Americans have long reviled the former as, in the words of then President Franklin Roosevelt (1882–1945, president 1933–45), “a date which will live in infamy.” Japanese, meanwhile, have deplored the latter as an act of indiscriminate slaughter. 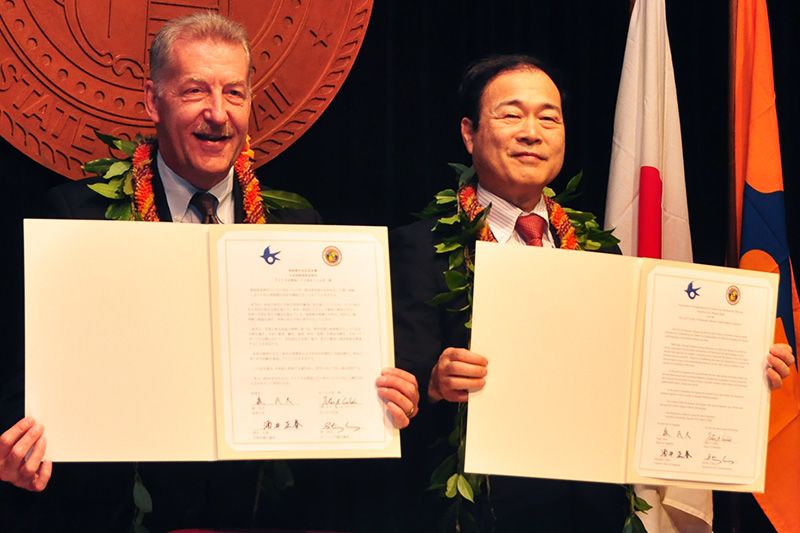 Nagaoka Mayor Mori Tamio (1949–, mayor 1999–) was eager to overcome the painful legacies and conceived the idea of undertaking exchange activities to help the cities come to terms with each other’s histories and to strengthen bilateral ties overall. A visit to Honolulu in August 2007 furnished the opportunity to broach the subject with his counterpart there.

Mori traveled to Honolulu to attend the Japan-US Mayors Fellowship Exchange Conference as vice-chairman of the Japan Association of City Mayors. In Hawaii he introduced himself to Honolulu Mayor Mufi Hannemann (1954–, mayor 2005–10) as mayor of the hometown of Yamamoto Isoroku. Mori explained that Yamamoto had personally opposed going to war with the United States but had felt compelled to abide by his government’s instructions. Mori then proposed that Honolulu and Nagaoka engage in bilateral exchange initiatives, to which Hannemann agreed.

In October 2008 Mori led a goodwill delegation to Honolulu, and the cities soon embarked on what became a growing range of exchange. The activities kicked off in earnest in March 2010 with a visit by 22 Nagaoka junior high school students to Honolulu. Honolulu and Nagaoka fortified the foundation for lasting exchange by concluding a sister-city agreement on March 2, 2012. 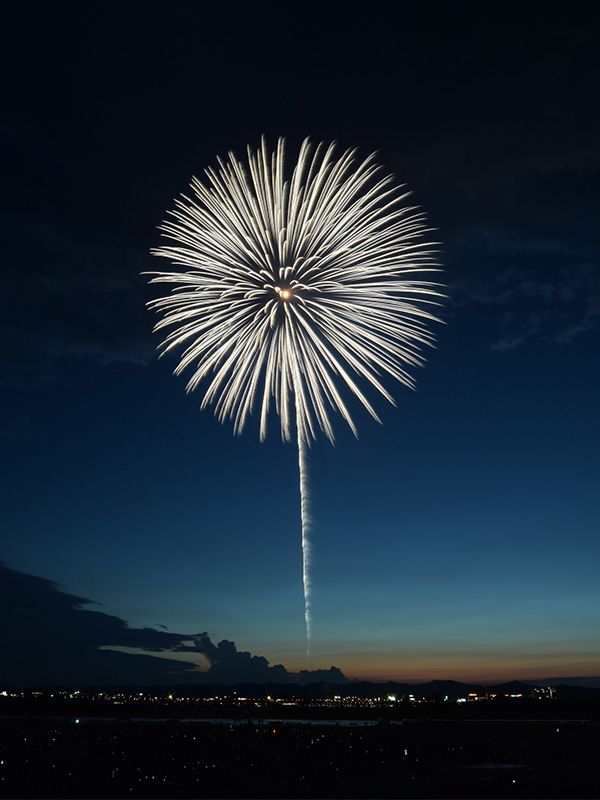 Nagaoka’s white shiragiku fireworks will honor the memory of those lost in the air raid on Pearl Harbor and affirm a commitment to lasting peace. Photo courtesy of Nagaoka City.

The second night after the signing of the sister-city agreement, a fireworks display took place off Waikiki Beach. It consisted of about 1,400 fireworks provided by Nagaoka to mark the occasion. The cities had scheduled a fireworks display in Honolulu for the previous year, but the Great East Japan Earthquake of March 2011 had forced its cancellation. Their joint fireworks display has since become an annual event as part of the Honolulu Festival in March. As noted above, Nagaoka’s white shiragiku fireworks will accompany the seventieth anniversary end-of-war ceremony this August.

Fireworks are a Nagaoka tradition. The city’s two-night fireworks display over the Shinano River on August 2 and 3 draws nearly a million visitors annually. It ranks with counterparts in Tsuchiura, Ibaraki Prefecture, and Daisen, Akita Prefecture, as one of the three largest in Japan. The display consists mainly of ring-shaped bursts created with shells 90 centimeters in diameter. 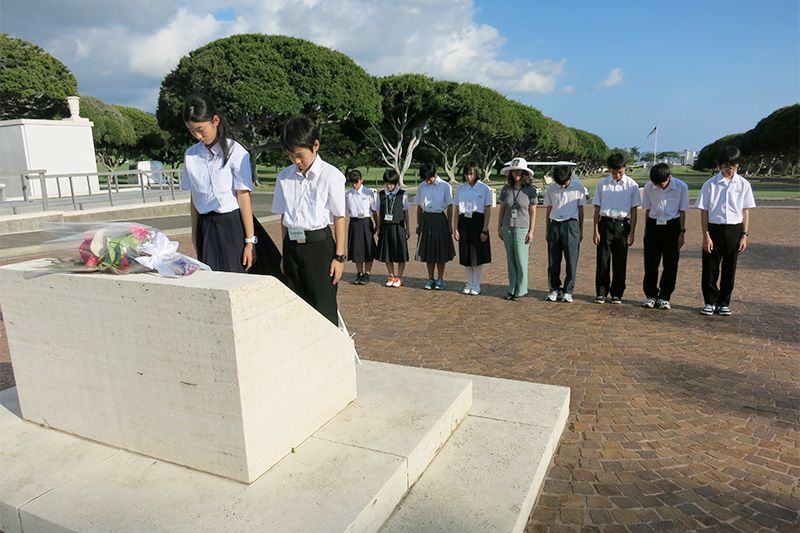 Fireworks are a glittering facet of the growing interchange between Honolulu and Nagaoka. Groups of junior high school students from Nagaoka visited Honolulu in January 2014 and 2015; Honolulu Mayor Kirk Caldwell stopped in Nagaoka in August 2014 during a trade mission to Japan; and Mayor Mori and nine high school and university students from Nagaoka traveled to Honolulu in December 2014 to take part in the Pearl Harbor Day memorial service.

Mori was the first head of a Japanese municipality ever invited by the US Navy to attend the Pearl Harbor ceremony. The service got underway with a moment of silence at 7:55 a.m., the time that the attack began. In attendance were some 3,000 people, including military veterans who had survived the attack. As part of the program, the master of ceremonies introduced Mori to the attendees. 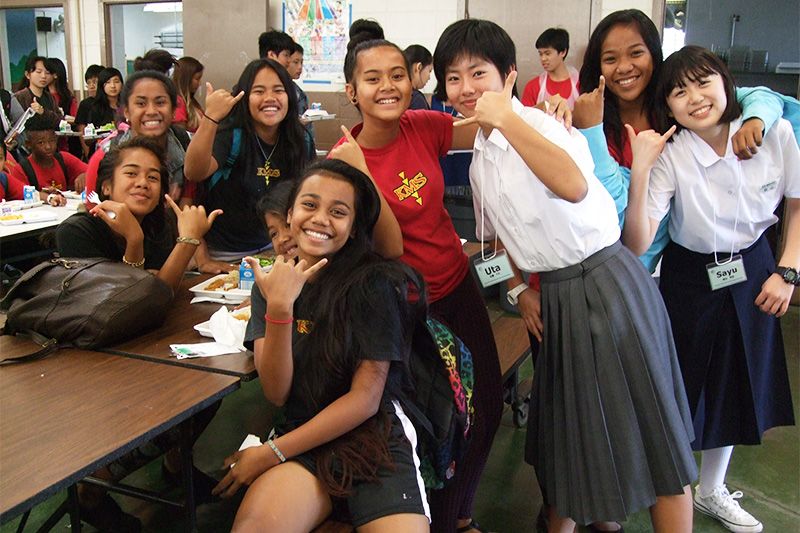 The Nagaoka students visit a Honolulu school and interact with students there in January 2015. Photo courtesy of Nagaoka City.

Honolulu and Nagaoka’s exchange continued in February 2015 with a three-day visit to Nagaoka by four high school students from Honolulu. The timing enabled the visitors from sunny Hawaii to experience Niigata Prefecture’s famously snowy environment and the culture that it has engendered. They toured the Nagaoka War Damage Exhibit Hall and the Yamamoto Isoroku Memorial Museum and exchanged views with Nagaoka high school students about the meaning of peace.

One of the students from Honolulu revealed a renewed perspective on Yamamoto in an interview on a local television channel. She stated that she had formerly harbored a bad impression of him as someone who had led Japan into war. The student explained that her impression had changed on learning that Yamamoto had opposed making war on the United States.

This August’s seventieth anniversary commemoration will also be an occasion for bilateral interchange. Visitors from Honolulu will take part in five days of future-oriented exchange in Nagaoka, starting on July 30. This will continue with another five days of activities in Honolulu, starting on August 13.

Other exchange activities are under discussion, such as a Honolulu youth peace summit and a symposium to be held jointly by the Pearl Harbor Visitor Center, the Nagaoka War Damage Exhibit Hall, and the Yamamoto Isoroku Memorial Museum. The symposium would be a vehicle for fostering shared understanding of wartime events and the importance of preventing conflict. Representatives of both cities have agreed, meanwhile, to promote exchange between the Nagaoka Institute of Design and the University of Hawaii and to propagate grassroots exchange in the realms of culture and sports.

“I believe,” declares Mori, “that the fruit of friendship we have nurtured through our sister-city programs will bloom in the form of fireworks during a display of Nagaoka fireworks at Pearl Harbor marking the seventieth year since the end of the Pacific War. The City of Nagaoka is responsible for conveying to our youths the significance of peace with the future in mind.”

“The bonds of friendship between our cities have been further strengthened,” adds Honolulu Mayor Caldwell, “and will continue to grow forever for the pursuit of peace. The display of Nagaoka fireworks at Pearl Harbor will be a historic event. The Nagaoka fireworks will be launched to honor war victims and to pray for peace. We will be able to send out to the world our message in which we can express that the cities of Nagaoka, the hometown of Isoroku Yamamoto who commanded the Pearl Harbor attack, and Honolulu, where the Pearl Harbor attack occurred, have developed wonderful ties of friendship.”

(Originally written in Japanese by Murakami Naohisa of Nippon.com and published on April 23, 2015. Banner photo: Fireworks from Nagaoka illuminate the night sky off Honolulu’s Waikiki Beach on March 8, 2015. Photo courtesy of Nagaoka City.)