Honolulu, Hawaii, and Nagaoka, Niigata will join hands in commemorating the seventieth anniversary of the end of World War II this August 15 (August 14 in Hawaii). A display of Nagaoka’s famed fireworks at Pearl Harbor will reaffirm US-Japanese friendship, underscore the virtues of peace, and honor the memory of the war’s victims.

Binding Honolulu and Nagaoka, sister cities since 2012, is the towering presence of the Japanese admiral Yamamoto Isoroku (1884–1943). Yamamoto, as the commander-in-chief of the Imperial Japanese Navy’s Combined Fleet, orchestrated the attack on Pearl Harbor. And he was a native of Nagaoka.

Japan’s attack was a seminal event in the eruption of World War II as a global conflict. It triggered the US entry into the war in Europe, as well as in the Pacific. The US Congress declared war on Japan the day after the attack. Japan’s Tripartite Pact allies, Germany and Italy, dutifully declared war on the United States, and the United States responded immediately in kind. Yamamoto had denounced the Tripartite Pact as “utter insanity” and had prophesized its tragic denouement. But he was first and foremost a loyal servant of his government, and he carried out his orders to the best of his ability.

Yamamoto was the sixth son of Takano Sadayoshi (1829–1913), a samurai retainer in the Nagaoka domain. The name “Isoroku” is a reading of the number 56, his father’s age when he was born. In 1916 Isoroku inherited the mantle of the Yamamoto line of Nagaoka domain retainers. The Yamamoto lineage. which had terminated amid the strife accompanying the Meiji Restoration of 1868, was reborn in the person of Isoroku.

Two extended stays in the United States had provided Yamamoto with firsthand understanding of that nation. He studied at Harvard University from 1919 to 1921 and served as the naval attaché at the Japanese embassy from 1925 to 1927. He was painfully aware of Japan’s vast industrial and military disadvantage vis-à-vis its prospective foe. But the two nations had been engaged in virtual sparring as potential adversaries since the 1920s, and conflict had attained an air of inevitability. War had become seemingly unavoidable with the US embargo on oil exports to Japan after the latter’s occupation of Hainan Island and advances into northern French Indochina. Yamamoto was a cog in the wheels of that inevitability.

Planner and Overseer of the Pearl Harbor Attack

Japanese Prime Minister Konoe Fumimaro (1891–1945, in office 1937–39, 1940–41) asked Yamamoto in autumn 1941 about the likely course of a possible war with the United States. Konoe recorded the admiral’s response in his diary: “If I receive orders to go to war, I’ll show you some pretty impressive results for the first 6 to 12 months. But if things drag on for two or three years, I’ve got no confidence [about how it will end]. We are stuck with the Tripartite Pact, but I would implore you at least to do everything possible to avoid war with the United States.” 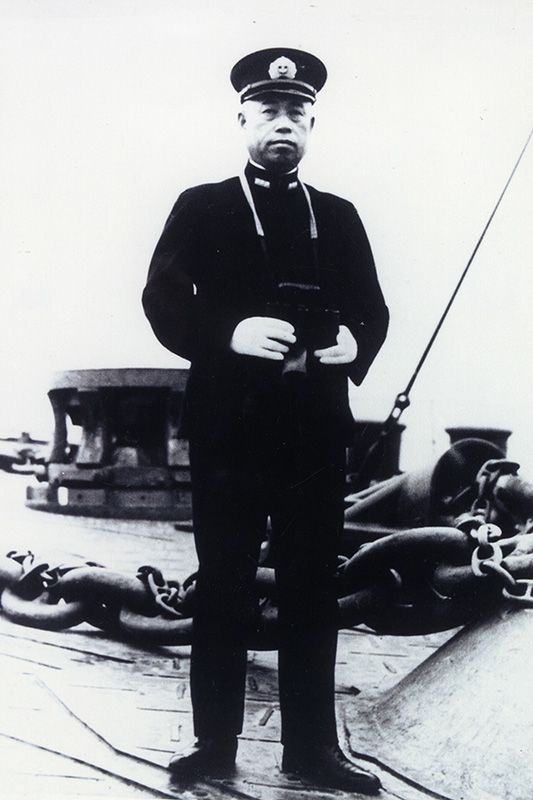 Yamamoto posed for this photo while serving as the commander-in-chief of the Imperial Japanese Navy’s Combined Fleet. Photo courtesy of the Yamamoto Isoroku Memorial Museum.

Tōjō Hideki (1884–1944, prime minister 1941–44) replaced Konoe as prime minister in October 1941 and promptly oversaw two actions that led Japan into war with the United States and with the United Kingdom: the navy’s air attack on Pearl Harbor and the army’s simultaneous attack on British Malaya. Yamamoto, true to his word, obeyed his orders to plan and carry out the attack on Pearl Harbor. He put aside the reservations he had voiced to Konoe in leading the navy through early triumphs and through the decisive setbacks of Guadacanal and Midway.

Yamanoto met his fate on April 18, 1943, during an inspection tour of Japanese positions in the South Pacific. US naval intelligence intercepted and decrypted his itinerary, and a squadron of 16 P-38 Lightning fighter aircraft intercepted Yamamoto’s transport plane and shot it down over the island of Bougainville in Papua New Guinea.

Members of the Nagaoka community hold a ceremony annually on the anniversary of Yamamoto’s death. The ceremony takes place in a park that occupies the former site of the home where Yamamoto was born. In this seventieth-anniversary year of the war’s end, the ceremony drew some 100 people, including Yamamoto’s grandson Gentarō (1962–). They lit incense in honor of Yamamoto and offered prayers. “The world has changed greatly since my grandfather’s day,” commented Gentarō, “but things remain unsettled. We’ve got to continue praying for peace.”

The Air Raid on Nagaoka

Nagaoka was the only city in Niigata Prefecture to suffer heavy bombing in World War II. A squadron of B-29 Superfortress aircraft began dropping incendiary bombs on the city at 10:30 p.m. on August 1, 1945. The bombing continued for nearly two hours, leaving 80% of the city center in ashes and killing more than 1,400 people.

A story that has circulated for years holds that the US military targeted Nagaoka because the city was Yamamoto’s hometown. The air raid, according to that version of events, was US vengeance for the Yamamoto-directed attack on Pearl Harbor. 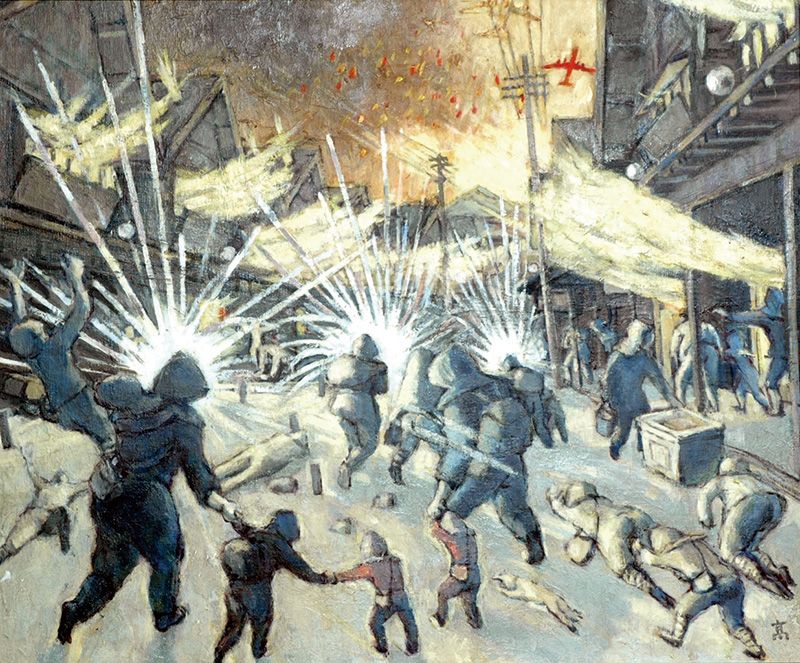 Nasu Takaaki (1933–), a local artist, rendered his memories of the August 1945 air raid in this painting. Photo courtesy of the Nagaoka War Damage Exhibit Hall.

To be sure, the US high command was keenly aware of Yamamoto’s iconic status among the Japanese. Documenting that awareness is a memoir by Edwin Layton, a staff intelligence officer for the Pacific Fleet. Layton was intimately familiar with Yamamoto’s standing in Japan. He became acquainted with Yamamoto as the naval attaché at the US embassy in Tokyo in the late 1930s. Ironically, he later participated in planning the April 1943 fighter attack that brought down the plane carrying Yamamoto over the Solomon Islands.

Layton alludes to Yamamoto’s importance in his memoir And I Was There: “There was no doubt in my mind that shooting down Yamamoto would be a vital and serious blow to the Japanese. There was no one of the same stature. . . . There was indeed only one Yamamoto.” Layton admits to “qualms of conscience” about essentially “signing the death warrant of a man whom I knew personally.” But he concludes that Yamamoto’s strategic importance warranted the action: “War, in essence, involves the destruction of your enemy. As the leader and inspiration for the Japanese navy, Yamamoto was an important foe whose death would benefit the Allied cause.”

We can see that Yamamoto commanded careful attention from the US military as a strategic asset for Japan and, thus, as a high-priority target. Whether simply being the late admiral’s hometown would have made Nagaoka a US target is another matter. A more plausible reason for the Nagaoka air raid is that the city hosted a laboratory of Japan’s Institute of Physical and Chemical Research, whose presence presumably drew the incendiary firestorm.

Fireworks Instead of Bombs

Nagaoka’s fireworks were the inspiration and subject of a notable work by the itinerant artist and folk hero Yamashita Kiyoshi (1922–71). Yamashita, who bore an intellectual disability and a speech impediment, is famous for his chigiri-e (torn-paper pictures)―collages created with pieces of colored paper that can have an effect remarkably like watercolors. He mastered the art of chigiri-e at a school for disabled children and held highly successful one-man shows while still a teenager.

Yamashita left the school in 1940 and traveled throughout Japan more or less continuously until 1954, creating chigiri-e works at stops along the way. Critical and popular acclaim for his work has proved enduring, and he even became the subject of a popular television series that aired from 1980 to 1987.

Fireworks were a favorite theme for Yamashita, and his 1949 work Nagaoka no hanabi (Nagaoka fireworks) is especially well known. Yamashita is famous for his endearing aphorisms, as well as for his chigiri-e creations. “The war wouldn’t have happened,” he quipped, “if people had just made beautiful fireworks instead of making bombs.” Nagaoka’s fireworks will evoke that very spirit in the night sky over Pearl Harbor this August.