After the Kumamoto Earthquakes: Responding and Rebuilding

Aftershocks continue to shake the prefectures of Kumamoto and Ōita, which remain in a state of confusion following the powerful earthquakes from April 14 to April 16. Damage to roads has delayed delivery of food, water, and other emergency supplies to some public shelters, while at least one evacuee has died from pulmonary embolism, commonly known as “economy class syndrome,” as a result of spending too long in the cramped conditions of her car. There is also a serious lack of toilets in shelters, and elderly and disabled evacuees find it difficult to climb the steps on portable toilets.

While public relief efforts focus on saving lives and wider recovery, private organizations are able to provide rapid support for people with specific needs. On April 19, the Nippon Foundation announced emergency measures to help people in the area affected by the earthquakes. These include delivering 500 emergency toilets—designed to be accessible to all users—to shelters where there is a shortage and sending vehicles to assess what particular support is required for elderly, disabled, and other vulnerable evacuees.

The emergency toilets, which do not use water and are able to seal up waste for disposal, cost ¥300,000 each. The foundation began surveys of sanitation needs on April 15—the day after the first earthquake—and soon received many requests. Staff at one shelter stated that there were just two toilets for 270 evacuees. Concern over inadequate sanitation facilities can lead to evacuees failing to hydrate properly, which can have adverse health effects and is a factor in economy class syndrome. Accordingly, the foundation decided a swift response was necessary. It contacted a manufacturer that had previously supplied toilets after the 2011 Great East Japan Earthquake, bought all of the 500 units it had in stock, and sent them to shelters in Kyūshū. 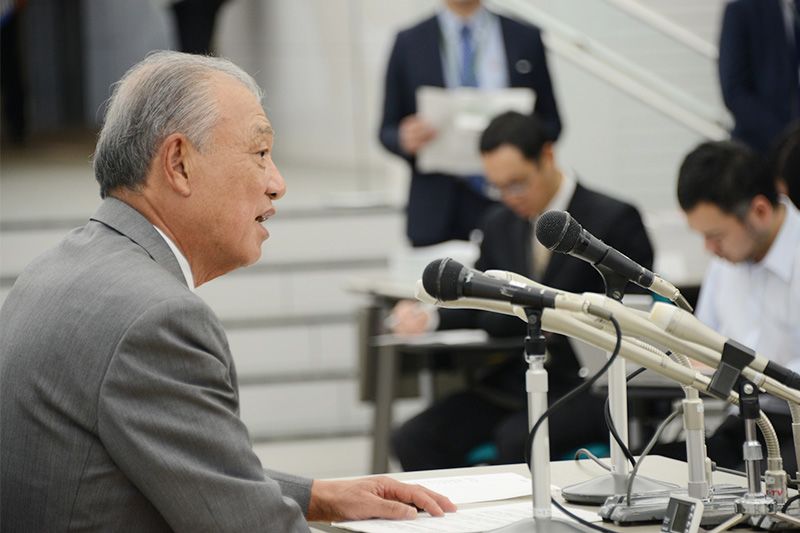 The foundation also announced that it had set aside ¥3 billion for the repair and rebuilding of Kumamoto Castle. Five years ago in Tōhoku, portable shrines, musical instruments, and other items used in local festivals were washed away in the tsunami. At that time, the Nippon Foundation provided around ¥1.2 billion to help revive these festivals. Sasakawa Yōhei, the chairman of the foundation, explained: “Supporting the revival of festivals, which were a form of spiritual solace for communities in the affected area, gave those communities hope about reconstruction. The festivals also drew some residents who had evacuated to other prefectures to return home.” As after the Great East Japan Earthquake, the foundation will back the activities of nonprofit organizations and volunteer groups with up to ¥1 million in funding. Its Wagamachi Fund will also help finance the rebuilding of homes and businesses.

As Japan has faced repeated disasters including the 1995 Great Hanshin-Awaji Earthquake, the 2004 Chūetsu Earthquake, and the 2011 Great East Japan Earthquake, private organizations involved in relief have developed support networks. These nonprofits and volunteer groups, specializing in healthcare, welfare, education, and other fields, are now beginning their activities in Kumamoto Prefecture and surrounding areas.