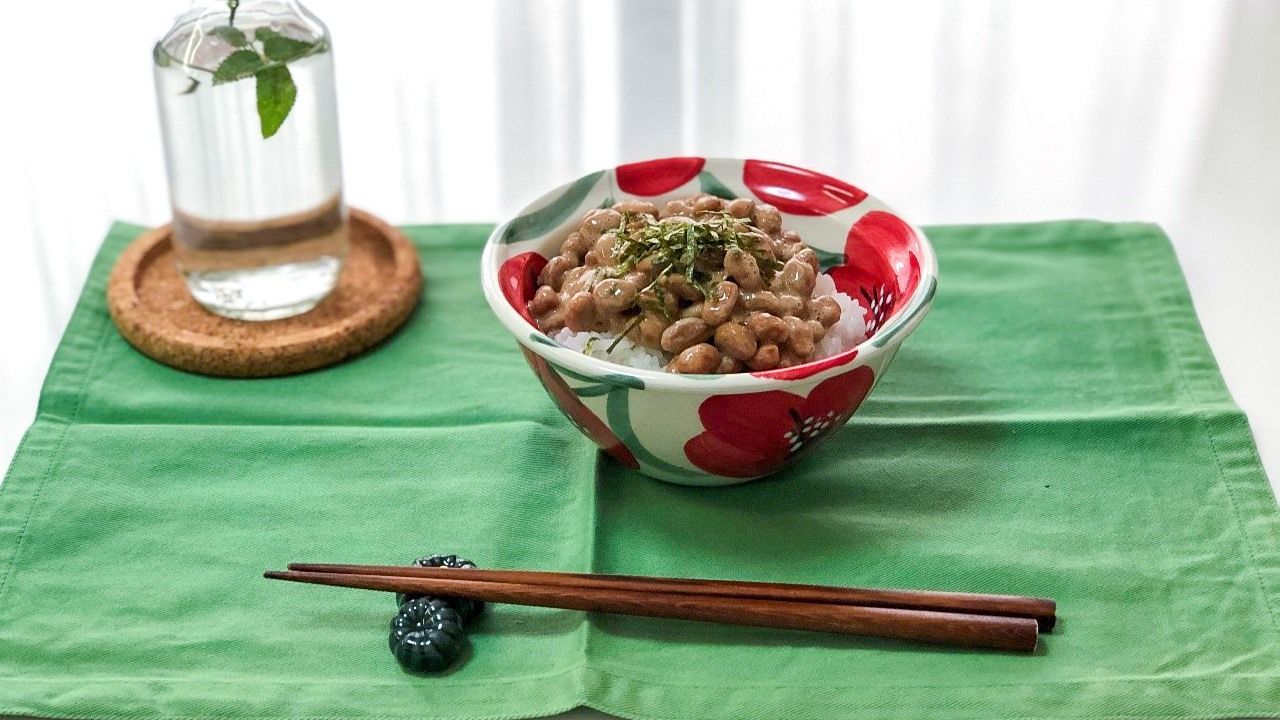 Food and Drink Culture Lifestyle Nov 18, 2020
The Japanese food nattō, known for its stickiness and distinct smell, is earning accolades for its many health properties. We explore the origins of the fermented food.

Japan’s nattō, a traditional food consisting of fermented soybeans, is a culinary beauty—and, depending on who you ask, a beast. Enthusiasts find the texture and pungent aroma of the dish pleasantly mouthwatering. Detractors, on the other hand, decry it as a slimy, smelly gastronomic abomination. Although polarizing, nattō has garnered attention for its many health benefits, including as a rich source of vitamins B and E and protein, earning it a growing reputation as a “superfood.” So what is the story behind nattō?

The method for making nattō is fairly basic. Steamed soybeans are inoculated with Bacillus subtilis nattō—a strain of bacteria known in Japan as nattō-kin—and left in a warm environment to ferment into a sticky, aromatic glob. When and where Japanese first started making the food in this manner, however, is something of a mystery.

Soybeans have been cultivated in Japan for thousands of years , and some experts argue that something akin to nattō was part of the diet as far back as the Yayoi period (c. 300 BC–250 AD),  a claim the archeological record has yet to bear out. The earliest whiff of a fermented bean dish arises when the characters nattō (納豆) first appear in the written record during the middle of the Heian period (794–1185). However, the term is thought to have initially referred to a completely different type of fermented soybean called shiokara nattō, or “salty natto,” that was brought over from China and associated with the diet at Buddhist temples . Made with kōji-kin—the same fungus used to brew such traditional delights as sake and soy sauce—this food has a strong, salty taste and is not the least bit sticky.

The stringy variation of nattō, known as itohiki nattō, was supposedly discovered in the late Heian by the famous warrior Minamoto no Yoshiie (1039–1106). According to folklore, during a prolonged standoff with the unruly samurai in the hills of what is now Yokote, Akita Prefecture , Yoshiie ran low on feed for his army’s horses. To fortify his stockpiles, he commandeered bushels of soybeans from local farmers, who first boiled the legumes in preparation for sun-drying the fodder for storage. However, Yoshiie was rushed for time and had his army cart off the still steaming beans in bags made from rice straw. After several days, the soybeans, helped along by the body heat of the horses, developed the telltale signs of nattō. Curious soldiers, for reasons known only to themselves, decided to sample the fermented fodder, declaring it to be scrumptious. And the rest is history. 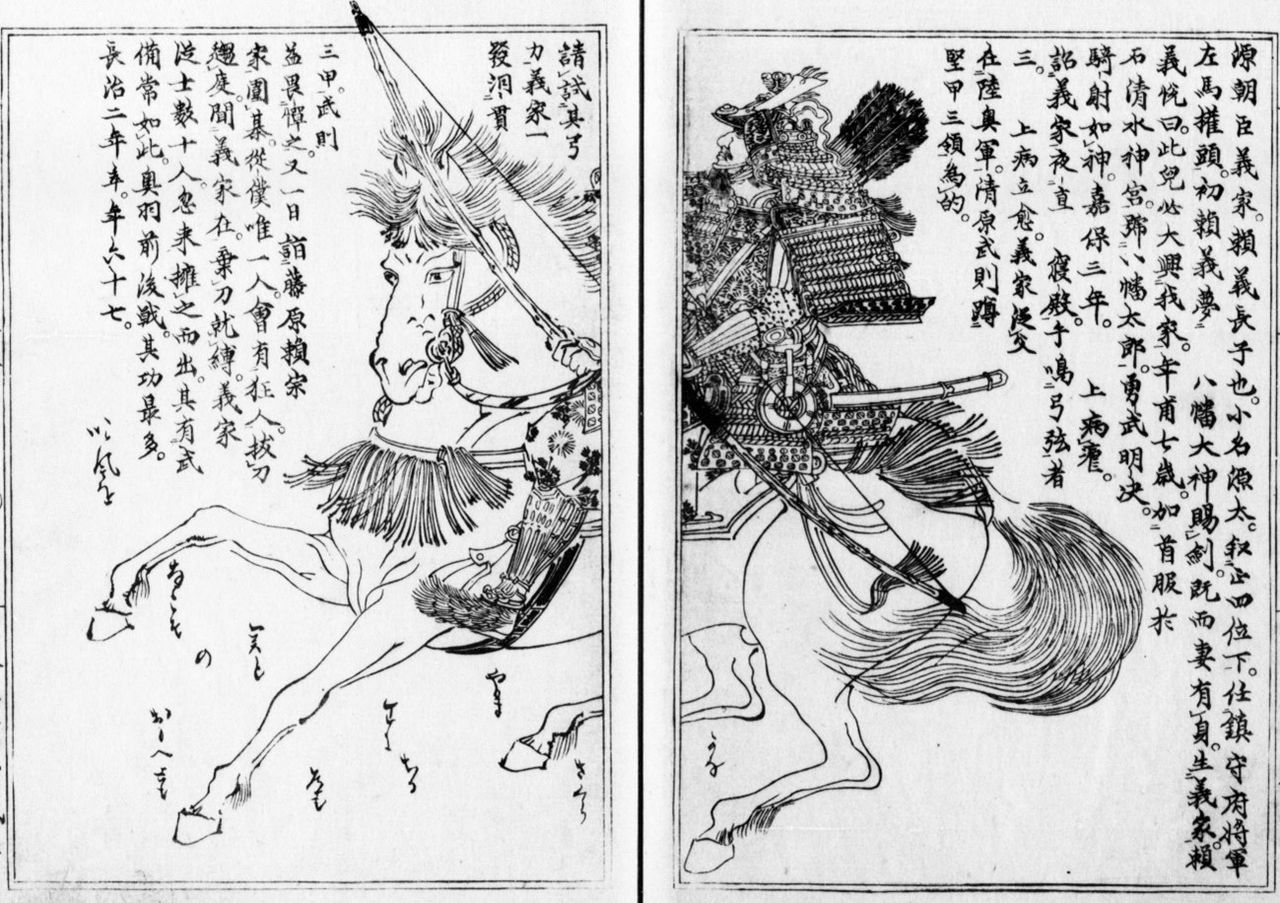 The legendary father of nattō, Minamoto no Yoshiie, from the pages of Zenken kojitsu, a collection of biographies of famous figures written during the Edo period. (Courtesy of the National Diet Library)

Although such a tale is best taken with a grain of salt, it may still contain a nugget of truth as to the origin of nattō. Until the Japanese scientist Hanzawa Jun paved the way for commercial-scale production by successfully isolating Bacillus subtilis in the early twentieth century, people made nattō by wrapping boiled soybeans in bundles of rice straw, a natural harbinger of nattō-kin. Because of its abundance and durability, rice straw was also woven into a host of other items, including bags and baskets for storing food, and farms were awash in the fermenting bacteria. It is not a huge leap of logic to think, particularly given the long history of soybeans as a staple food, that Yoshiie and his hungry horses are stand ins for a much more amorphic and gradual process of discovery. 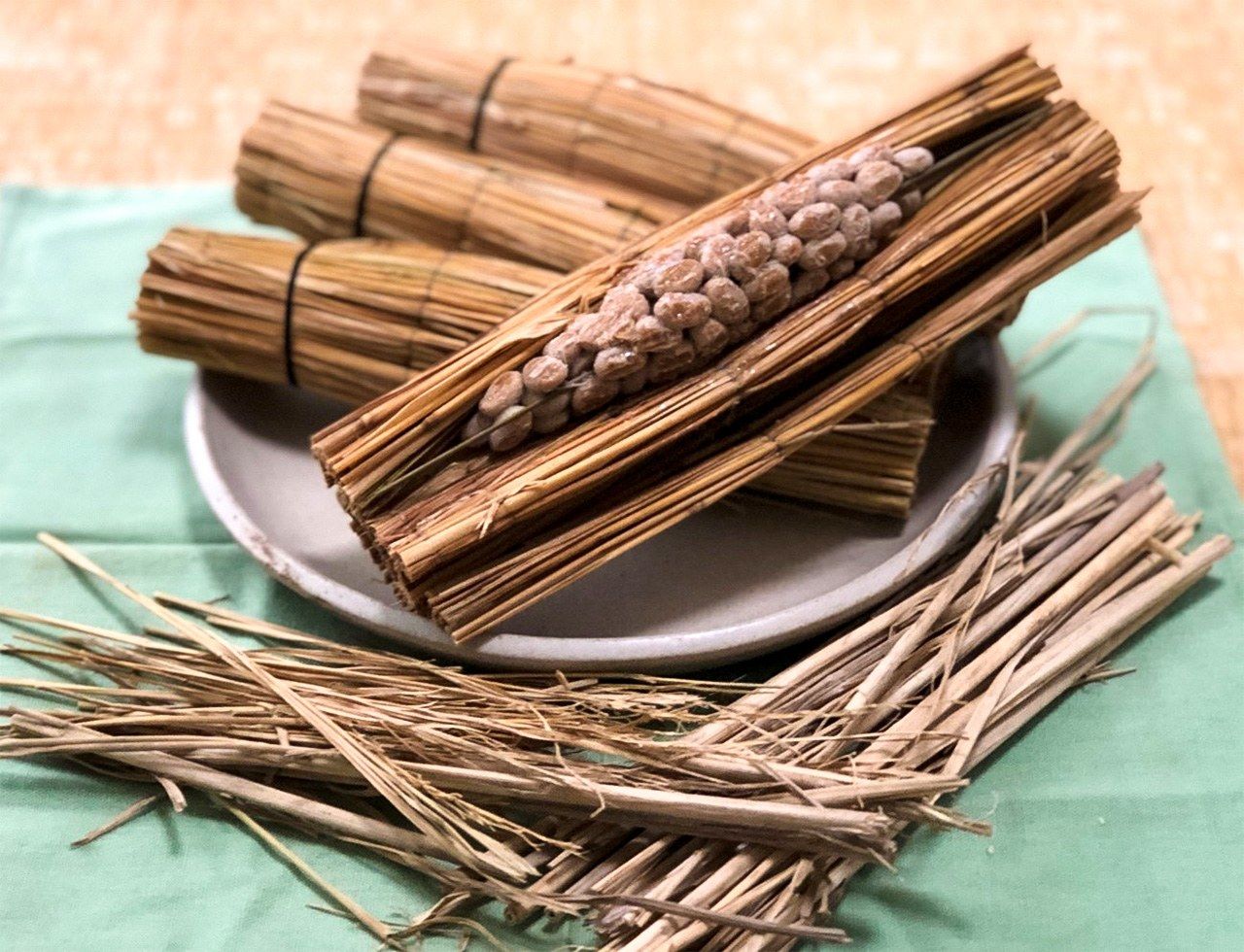 Old-fashioned nattō made by wrapping cooked soybeans in rice straw.

The earliest written reference to the sticky version of nattō is in a diary entrance penned in 1405 by the Kyoto aristocrat Yamashina (Fujiwara) Noritoki, who describes the food as itohiki daizu, or “stringy soybeans.” The fermented dish also features in a comical tale about anthropomorphized food published in the late 1400s, personified as a samurai, “Nattō Tarō of the many threads,” indicating a whimsical familiarity with its characteristic gooeyness.

Fast forward several centuries to the Edo period (1603–1868) and nattō consumption was booming, driven in part by the growing availability of inexpensive types of seasonings like soy sauce . Residents of rural communities cooked up homemade versions, and in cities like Edo (now Tokyo), Kyoto, and Osaka , vendors plied the streets peddling the viscous treat to eager customers. Initially a breakfast dish enjoyed mainly in winter , presumably when spoilage was less of a concern, booming demand eventually made nattō into a year-round delicacy. The distinct call of the nattō-uri making their morning rounds became part of the rhythm of urban life and was even immortalized in verse.

Sleeping late,
I am roused from bed,
By cries for nattō and basket clams 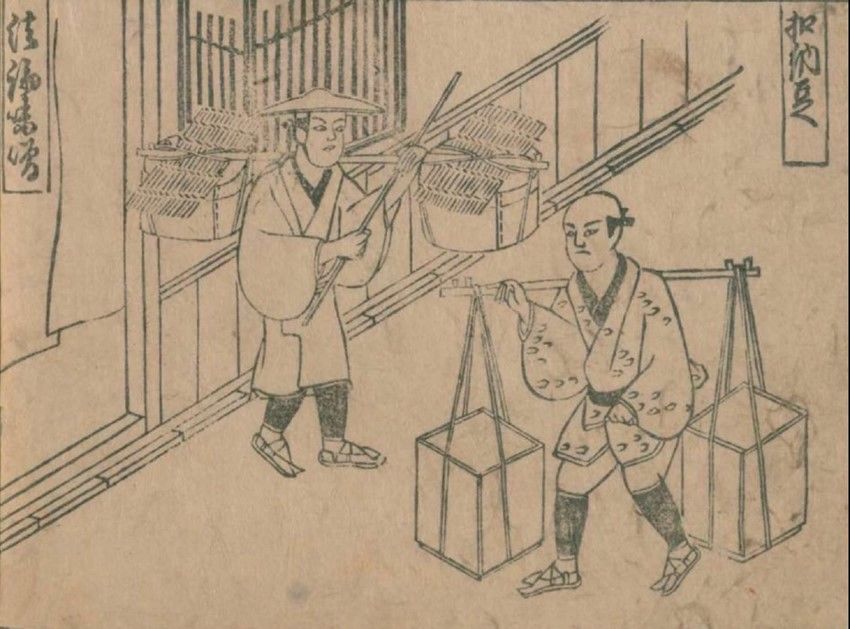 Today, nattō is a national institution. Japanese in 2019 spent a record ¥250 billion on the food, which comes to more than ¥4,200 per household. There is a staggering array of choices on the market, including mixtures made with cracked soybeans (hikiwari), whole beans (tsubu nattō) ranging from small to extra-large grades, and black beans (kuromame). Supermarkets and even modestly stocked shops offer wide selections, and some stores may even carry specialty nattō, such as varieties that are less malodorous or are made the old fashioned way, with rice straw.

Beans are typically sold in packs of single-serve polystyrene trays or paper cups, bundles of three being the most popular. Individual seasoning packets of savory sauce and spicy mustard are generally included, and depending on tastes, a person might also choose to mix the nattō with items like okra, diced leeks, raw egg, or kimchi . While there is no “right” way to prepare the beans, the general consensus is that a thorough mixing is essential to bring out the flavor and texture of the dish. The average amount of stirring is around 25 turns, but many nattō old-timers assert that 100 or more produce the tastiest results. 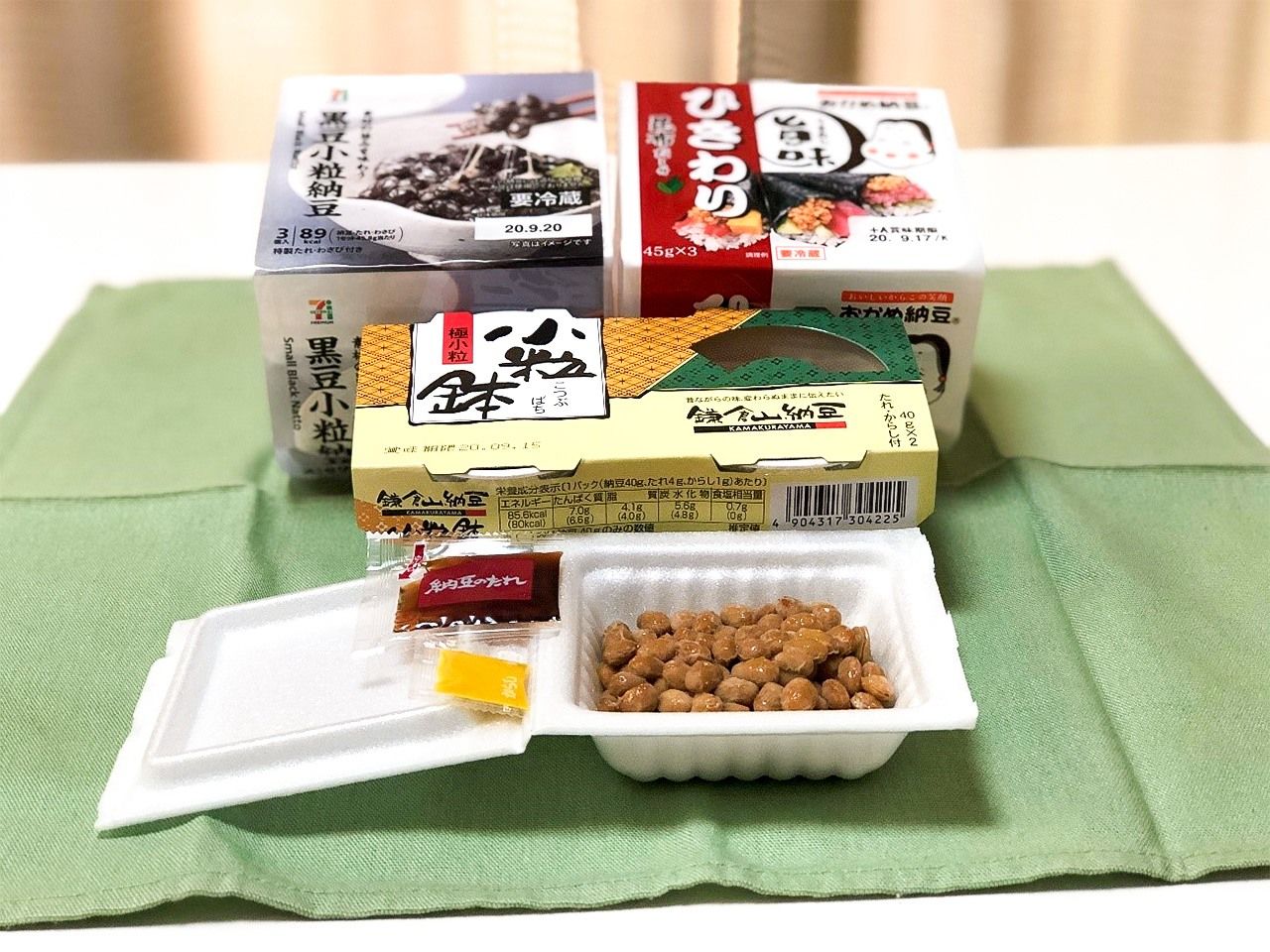 Once whipped into a frothy, gooey mixture, nattō is poured over rice or enjoyed on its own as a side dish. Slurping, as with noodles , is allowed, but special care is needed to prevent the gossamer strands from wafting across the table and onto other people’s food, as they are apt to do. The fermented bean also make a tasty filling for sushi rolls and can even be found adding a savory punch to dishes like spaghetti, fried rice, and a regional miso-soup-like concoction known as nattō jiru. 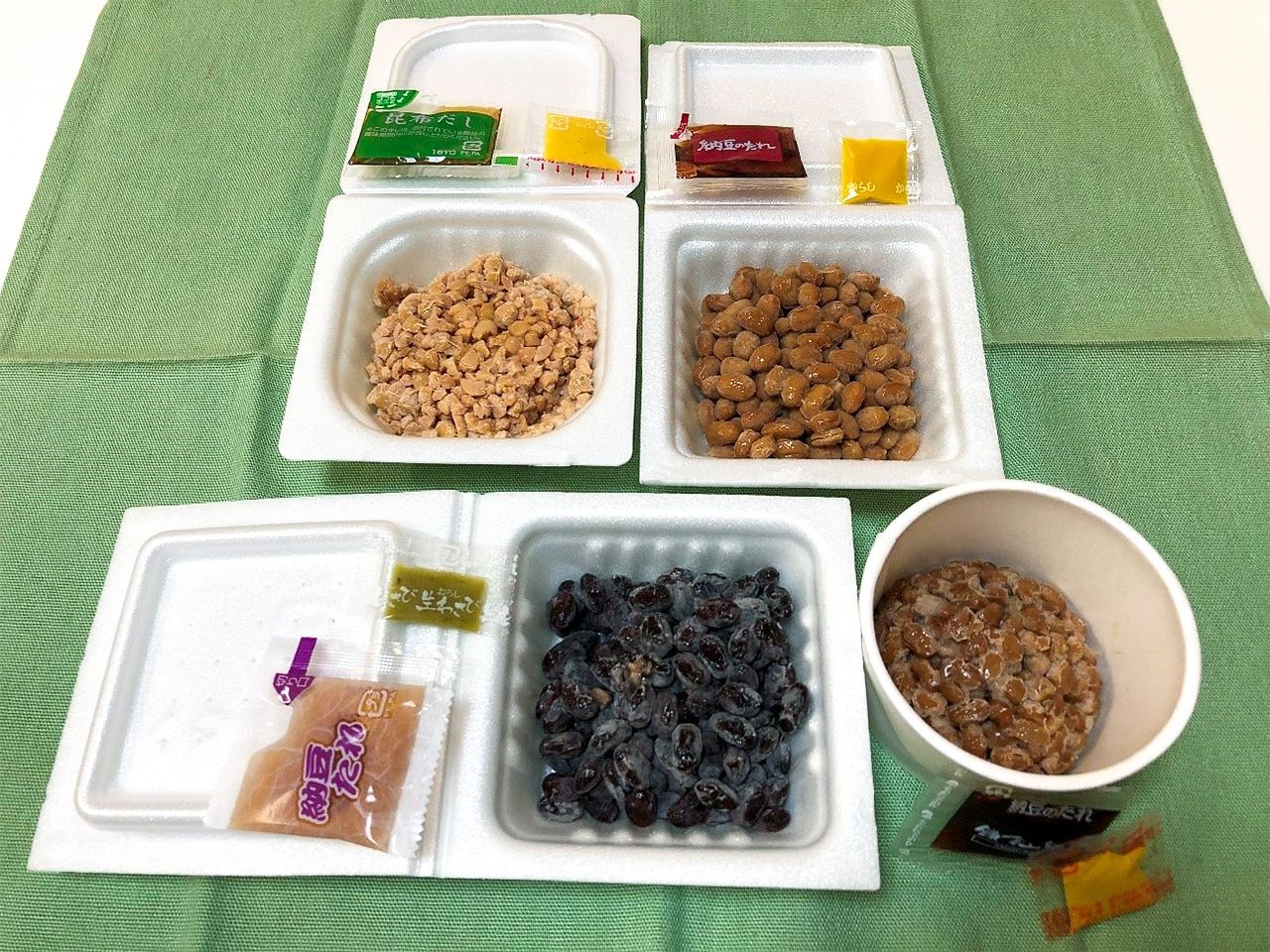 Nattō comes in a range of varieties, including cracked beans, whole beans, and black beans.

One common perception of nattō is that it is strictly a breakfast food. However, nearly 70% of respondents to a 2019 survey by the somewhat confusingly named Japan Nattō Cooperative Society Federation said they ate nattō at dinner time rather than in the morning. Another misleading portrayal is that residents in Japan’s western parts despise the dish. While the top nattō-consuming prefectures all lie in the east and northeast of Japan, where the pungent cuisine has long been a staple, the dish’s image as a superfood is helping overcome regionally held stigmas about odor and texture, helping boost consumption across the country.

But perhaps the biggest misnomer about nattō is that it is “Japanese.” Nagoya University Professor Yokoyama Satoshi and others have documented thriving culinary cultures centering on beans fermented with nattō-kin in regions across Southeast Asia and stretching into the Himalayas. There is also evidence of variations being produced in parts of Africa. These far-flung versions of nattō—foods with names like pebouk, thua-nao, and kinema—likely developed independently of the Japanese variety but still share many of the same manufacturing techniques, such as using plants for fermentation, and characteristics like odor and taste. One prominent difference is that most types are dried, which does away with any stickiness, and are used to season foods rather than eaten as is.

The story of nattō is an enchanting mixture of truth, folklore, and misconception. And it is a tale that is still developing as the food garners greater attention in Japan and abroad with more people, whether for health or gastronomy, joining the fermented-bean bandwagon.