Celebrating 50 Years Since the Tokyo Olympics: Reflections and Thoughts for the Future

The opening ceremony of the 1964 Tokyo Summer Olympics, the eighteenth Olympiad, took place on October 10. Under the Olympic charter, the duty of declaring the games officially open falls to the head of state of the host country. On request from International Olympic Committee President Avery Brundage, Emperor Hirohito officially declared the Tokyo Games open, reverently addressing the athletes and crowd. The emperor entered and exited the stadium to the accompaniment of electronic music by renowned composer Mayuzumi Toshirō. This combination of traditional and new produced a unique sensation symbolic of the age.

A Japanese television announcer broadcasting live from the ceremony provided an exquisite description of the clear weather that day, saying, “It’s as if all the blue skies in the world have combined.” The previous evening’s rain had dissipated without a trace, giving way to a spectacular autumn sun. Those of us involved with the games still talk how the weather that day set the tone of the next 15 days, making the Tokyo Olympics one of the most memorable and successful games to date.

Japan fell short in its attempt to host the 1960 Olympics, with the campaign initiated a mere nine years after most of Japan’s major cities had been decimated by US military bombing. The country won its subsequent bid, though, earning the privilege to host the 1964 games. Coming a scant 19 years after Japan’s defeat in World War II, the event welcomed delegations from 94 countries and regions around the world. The games were an overwhelming success, prompting President Brundage to declare, “It was truly a spectacular Olympics.” 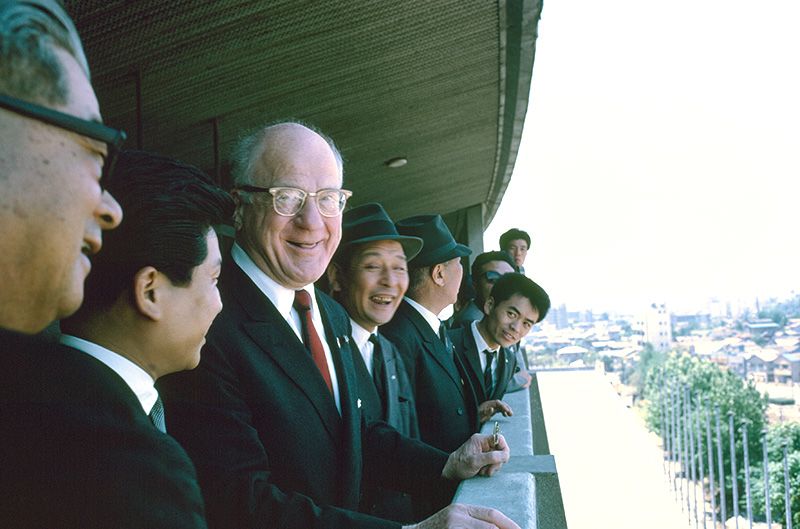 Nearly a half century later, in September 2013, Japan erupted in joy as Tokyo was awarded the 2020 Olympics. Regretfully, the year since then has seen this initial enthusiasm wane, with current preparations for the Olympiad, now less than six years away, having barely gotten off the ground. In my view, a paucity of strong ideas and vision has hampered the organizing committee’s ability to communicate a clear concept and philosophy of the games.

Looking back, Japan 50 years ago wanted to show the world that it had recovered from war and developed into a technologically advanced nation. I personally hope the 2020 Olympics will serve as a stage for Japan to communicate to the world the concepts of peace, harmony, and cooperation.

Tokyo’s first successful bid to host an Olympiad was decided at an IOC Session held at the 1936 Berlin Olympics, where committee members voted for Japan’s capital to host the Twelfth Summer Olympiad, to be held four years later, in 1940. Following this decision, the IOC at the 1938 session in Cairo, Egypt selected another Japanese city, Sapporo, to host the 1940 Winter Olympics. This marked the first time an Asian nation—any nation of color, for that matter—would host either Olympic Games.

By the time these decisions were made, however, Japan was already deeply involved in a war on the Asian mainland. Amid shortages of essential materiel like iron and steel, the Japanese army grew reluctant to cooperate in the games, saying that cavalry officers could not participate in equestrian events. At the time, Olympic equestrian disciplines were only open to commissioned military officers, with women and general horse enthusiasts barred from participation. Without the cavalry, Japan would be unable to host the equestrian events. Developments like these led the Tokyo and Sapporo organizing committees to inform the IOC in autumn of 1938 that they relinquished the rights to host the Olympics. The IOC accepted the petitions, leaving the dedicated campaigners for the games to fight back tears.

Helsinki, Finland, was awarded the 1940 summer games after Japan’s forfeit, but these were canceled when the Winter War broke out between Finland and the Soviet Union. The 1944 games planned for London suffered the same fate, being withdrawn as World War II raged on.

Dreams of a Torch Relay

Looking back at the 1940 Tokyo Olympics, I am moved by the vision my predecessors showed.

The first Olympic torch relay took place at the 1936 games in Berlin. It was the idea of the secretary general of the Organizing Committee, Carl Diem, to have runners carry the Olympic flame from Olympia, Greece, to Berlin, passing through seven countries on the way. Japan considered a similar relay starting in Olympia and stretching across Eurasia. But considering the exceedingly poor state of communications, roads, vehicles, and other infrastructure at the time, coupled with the Soviet Union’s lack of a National Olympic Committee to help coordinate the relay and a war raging between Japan and China, the idea was little more than fantasy. The dream of a relay vanished entirely when Japan relinquished the games in 1938.

After Berlin, the onset of war resulted in the cancelation of the Olympics, which were not to be held for the next 12 years. The games returned in 1948, with Saint Moritz, Switzerland, hosting the winter and London the summer competitions. Germany and Japan were barred from participating in these two Olympiads, showing that similar borders divide sports and politics. It wasn’t until 1952, at the winter games in Oslo and summer games in Helsinki, that the two nations were again permitted to compete. For both Germany and Japan, Norway and Finland represented their first Olympics in 16 years.

Signifying Japan’s Recovery to the World

The person most instrumental in bringing the 1964 Olympics to Tokyo was Tabata Masaji. President of the Japan Swimming Federation, Tabata, a diligent, resourceful, and persevering person, was known as one of the most capable leaders in the Japanese sports world. For example, when he learned that Japan would be excluded from the 1948 London Olympics he scheduled the Japan National Swimming Championships to be held concurrently at Tokyo’s Jingū Pool. This motivated swimmers like Furuhashi Hironoshin and Hashizume Shirō to clock times under those that earned gold in London.

In all, participants from 94 countries and regions competed at the Tokyo games. The focus of Olympic competition in that era was in the West, and holding the games in an East Asian country like Japan was a formidable challenge. Despite obstacles, the success of the games demonstrated that Japan, just 19 years after its decimation in World War II, had returned to the world stage. Nearly every aspect of the Tokyo Olympics went flawlessly, from the spectacular procession of athletes at the entrance ceremony to the smooth running of events and the impeccable management of the Olympic village. The athletes, officials, and members of the press visiting from around the world were astounded by the top-notch organization and the safety of the society.

Prior to the games, the only noteworthy infrastructural development in the capital was Tokyo Tower, which at 333 meters was the tallest communication tower in the world. With the help of overseas aid, Japan was able to build up its infrastructure, developing the Tōkaidō Shinkansen as the world’s first high-speed railway, building Tokyo’s Metropolitan Expressway, and constructing architecturally groundbreaking Olympic venues and facilities. The 1964 games were the first to feature live satellite broadcasts and Japan showed its technological prowess with the introduction of digital modes of timekeeping, measuring, and record keeping. Preparations for the Olympiad provided a vital boost to Japan’s economy, significantly increasing the pace of growth. 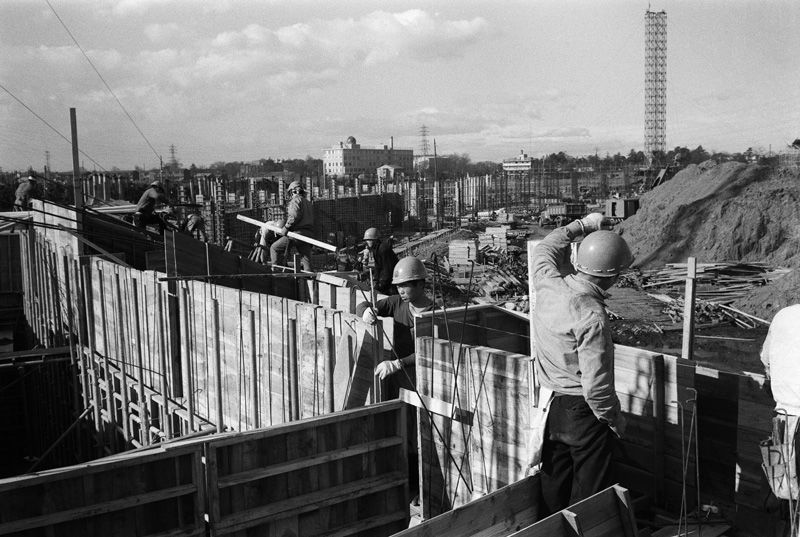 Construction prior to the Tokyo Olympics, January 1964. (© Jiji)

By 1964, political issues surrounding Taiwan, officially known as the Republic of China, and the People’s Republic of China had already reached a level affecting the two sides’ involvement in the Olympics. The first instance was in 1952, when the IOC voted just prior to the opening of the games in Helsinki to allow China to compete, leading Taiwan to boycott the event in protest. For various political reasons, Taiwan now competes under the name Chinese Taipei, but in 1964, the absence of the PRC and North Vietnam allowed the Taiwanese athletes to march into the stadium behind a placard, which would be strange if seen today, bearing the name Taiwan in English and the Republic of China in Japanese (Chinese characters). 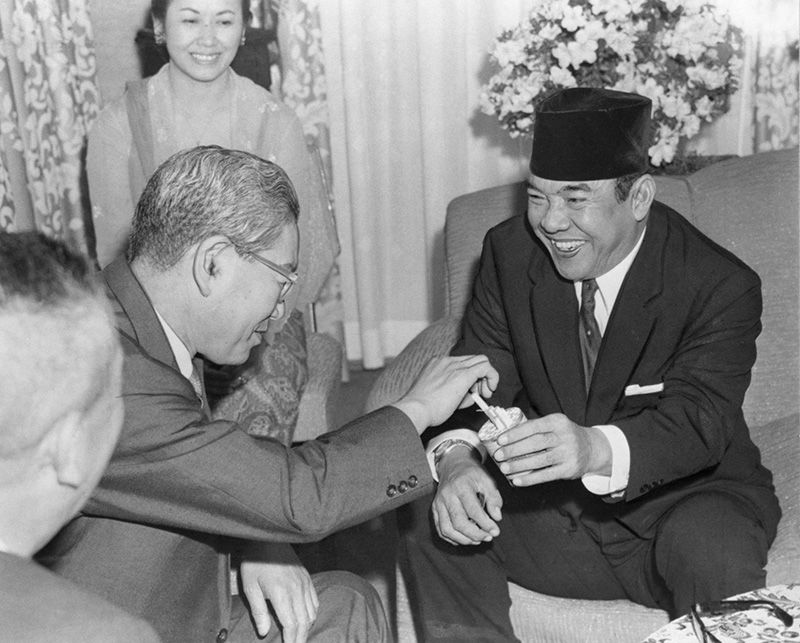 Indonesian president Sukarno meets with Prime Minister Ikeda Hayato prior to the Olympics in January 1964. (© Jiji)

Controversy also arose when Indonesia’s President Sukarno chose in 1962 to exclude Taiwan and Israel from the Fourth Asian Games, held that year in Jakarta. The conflict between the IOC and Indonesia worsened when the latter made the controversial move to form GANEFO, the Games of the New Emerging Forces. This led the IOC to consider barring Indonesia from competing at the Tokyo games. The Tokyo Olympic Organizing Committee made considerable efforts to prevent this, but fell short, and the Indonesian delegation was sent home the day before the opening ceremony.

North Korea had sent a delegation to Japan aboard the famous liner Mangyongbong, but for reasons similar to Indonesia’s, the country withdrew on the eve of the Olympics. This resulted in a double tragedy for sprinter Sin Kim-dan. Not only was the record holder and gold medal favorite in the women’s 800-meter race not allowed to compete, she was forced to return home after a mere 15-minute meeting with her father, who had fled North Korea.

The Tokyo Olympics, taking place at the height of the Cold War, saw a broad spectrum of developments on both domestic and international fronts. On the seventh day of the games, China, in willful disregard of the Olympics’ ancient ethos of peace, conducted its first nuclear test, sullying the reputation of Asia’s inaugural Olympiad. I can still clearly recall the collective sense of shock and disappointment felt inside the press center and Olympic village that day.

The Soviet Union sent a large delegation to Tokyo, but despite the country’s participation, Soviet fighter jets crossed into Japanese airspace on multiple occasions during the games, forcing Japan’s Air Self-Defense Force to scramble planes to deal with the intrusions. And amid this heightened tension (albeit for unrelated reasons), Nikita Khrushchev was removed as leader of the USSR.

Even though the Berlin Wall had been erected just prior to the games, East and West Germany competed together under a single flag. The team chose the traditional black, red, and gold German flag with the Olympic rings superimposed in white in the center. At the time, both East and West German flags used the same tri-colored design, with the East’s carrying the national emblem of a hammer and compass surrounded by a ring of rye. 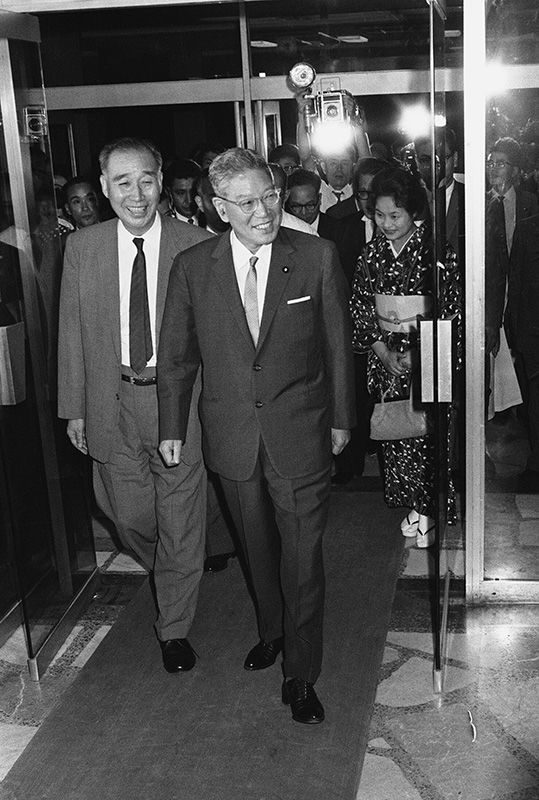 On the domestic front, Prime Minister Ikeda Hayato, citing illness, stepped down from office the day after the closing ceremony. His successor, Satō Eisaku, succeeded in reestablishing diplomatic ties with South Korea, oversaw the return of the Bonin and Okinawa Islands to Japan, and was awarded the Nobel Peace Prize. Satō, although an unexpected choice, was not unmerited, as his selection was demonstrative of the widespread postwar movement by citizens to form Japan into a peaceful, stable, and nuclear-free society. My involvement in the event may make me biased, but in my mind, the legacy forged by the Tokyo Olympics paved the way for the peace prize to come to Japan.

Being born in 1941 has meant that in my lifetime I have seen Japan go from being a major recipient of overseas aid to a leading provider of it. There are few countries that have made such a dramatic transition; I feel Japan has a duty to use its experience not just toward the betterment of sports and society, but more broadly, for the development of a safer and more stable world.

The Olympics in 2020 will be here sooner than we think. Events around the world will be a major factor in whether we will be ready in time. As I watch conflict rage unchecked in Ukraine, Syria, and Iraq, it is my sincere hope that the Olympics will be viewed not just as a major sporting event, but also as a force for promoting peace and stability around the globe.

(Originally written in Japanese. Banner photo: The Japanese team enters the stadium for the Opening Ceremony of the Tokyo Olympics, October 10, 1964. © Yomiuri Shimbun/Aflo.)