The Rich History and Uncertain Future of Bunraku Puppet Theater

The traditional theatrical art of bunraku combines chanting, shamisen music, and puppets for a distinctive aesthetic experience. Despite having experienced surges of popularity, it is now struggling to find an audience. This article surveys the history of bunraku and looks ahead to a new initiative aimed at reviving public interest.

Alongside kabuki and nō, the bunraku puppet theater is considered one of Japan’s three great theatrical traditions. After the Japanese government designated the stage art as an important intangible cultural property in 1995, UNESCO inscribed bunraku on its Representative List of the Intangible Cultural Heritage of Humanity in 2008.

However, bunraku’s current popularity lags behind its artistic recognition, having fallen far from its Edo period (1603–1868) heyday. In the wake of Japan’s devastating defeat in World War II, bunraku came close to extinction, but it somehow pulled back from the brink thanks to backing from the national and Osaka prefectural and municipal governments. In the last few years, though, current Osaka Mayor Hashimoto Tōru has cut funding to the Bunraku Kyōkai, the main association supporting the art, both as mayor and in his previous capacity as governor of Osaka Prefecture, leaving Japan’s traditional puppet theater under threat once again.

When bunraku emerged in Japan around four centuries ago, it was known as ningyō jōruri, ningyō meaning puppets and jōruri referring to a distinctive chanting style. Jōruri, literally meaning “beautiful jewel,” developed in the mid-fifteenth century, shamisen accompaniment was added in the second half of the sixteenth century, and these two were eventually combined with large puppets operated by puppeteers.

The “Shakespeare” of Japan

In the seventeenth century, bunraku boomed, and in the playwright Chikamatsu Monzaemon (1653–1725) it found its “Shakespeare.” Chikamatsu, a son of a rōnin or masterless samurai, was living in Kyoto when he met the great chanter Takemoto Gidayū (1651–1714), noted for the emotional power of his performances, and became obsessed by jōruri and puppet theater.

He made his breakthrough in 1703 with the hugely successful Sonezaki Shinjū (The Love Suicides at Sonezaki), which tells the story of the tragic love of Ohatsu, a prostitute, and Tokubei, a clerk for a soy sauce merchant. As they walk together to the place where they have decided to kill themselves in the woods, the narrator intones the famous lines:

“Farewell to this world, and to the night farewell.
We who walk the road to death, to what should we be likened?”(*1))

Chikamatsu ultimately left over 100 bunraku works, including such masterpieces as Meido no hikyaku (The Courier for Hell) (1711), Kokusen'ya kassen (The Battles of Coxinga) (1715), and Shinjūten no Amijima (The Love Suicides at Amijima) (1720). He turned his hand to kabuki too, collaborating for around 10 years with Sakata Tōjūrō (1647–1709), a leading actor in the Kamigata (Kyoto-Osaka) region. Many kabuki works popular today were originally adaptations of puppet theater plays.

In the form that has become standard, bunraku requires three kinds of performers: the tayū or chanter, the shamisen player, and the puppeteers.

Kiritake Kanjūrō III, a well-respected bunraku veteran, tells Nippon.com that “the current practice of using three puppeteers for each puppet was an Osaka invention, introduced in 1734.” The puppets range from 1 to 1.5 meters in height with the omozukai (principal operator) controlling the head and right hand, while two assistants control the left hand and legs respectively. 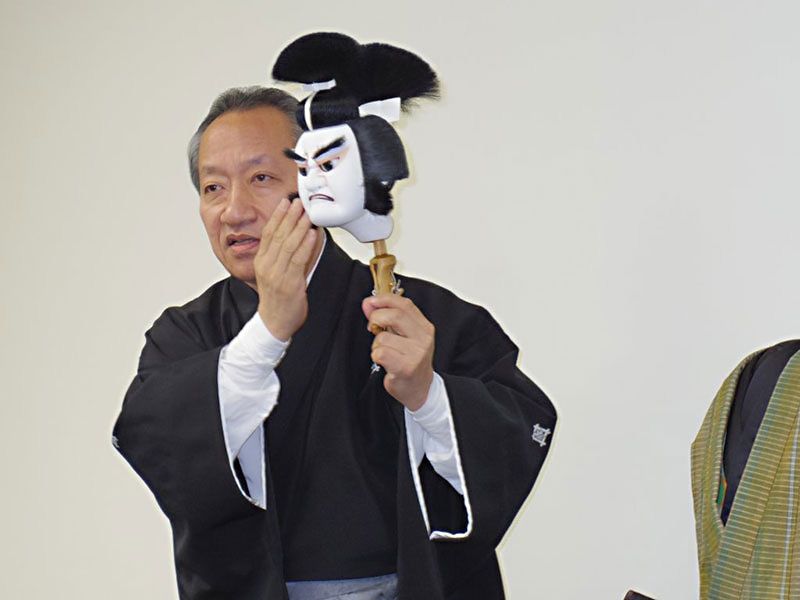 Kiritake Kanjūrō III has received numerous awards for his puppetry, including the Minister of Culture Award for Fine Arts, the Medal of Honor (Purple Ribbon) and the Japan Art Academy Award. In this photograph, taken at the National Bunraku Theatre in Osaka, he describes the mechanism for puppets’ head movements. 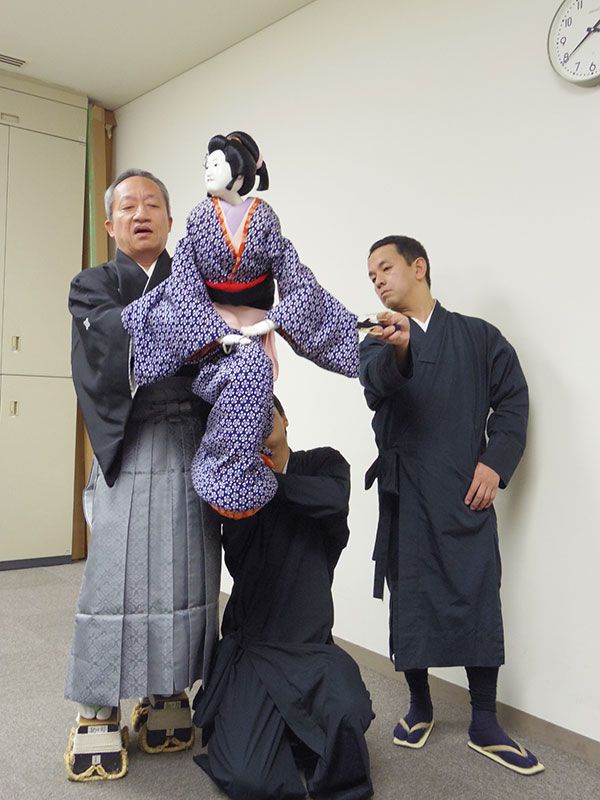 During the Edo period, while bunraku flourished among the townspeople of Osaka, it also spread to the island of Awajishima in the Seto Inland Sea and further to present-day Tokushima Prefecture in Shikoku. Many bunraku texts still turn up in old storehouses in the Kansai and Shikoku regions, testifying to the popularity of the art form. It is believed that the common people were familiar with lines from popular plays, which became their sources of learning and helped shape their ethical values. In the mid-eighteenth century, bunraku reached the peak of its fame, but as audiences soon shifted their attention to kabuki, bunraku went into a long decline

The Bunrakuza theater in Osaka, built in the nineteenth century, gives the art form its present standard Japanese name. The theater was destroyed during the 1945 bombing of Osaka and rebuilt in 1946, but 1948 labor issues at the controlling company Shōchiku led to a split in the bunraku troupe into two factions. The Chinamikai group remained loyal to Shōchiku, while Mitsuwakai, on the side of the union, broke away. This split continued until 1963 when Shōchiku finally gave up on bunraku, citing continued losses.

Even so, in 1962, bunraku gained wider appreciation with a first postwar overseas performance in Seattle. And 1963 also saw the formation of the Bunraku Kyōkai, reuniting the divided performers. The establishment of the National Theatre of Japan in Tokyo in 1966 and the National Bunraku Theatre in Osaka in 1984 gave further life to the struggling art.

A Place in Japanese Hearts

In April 2014, I went to the National Bunraku Theatre to see one of the final performances of 89-year-old chanter Takemoto Sumitayu VII, a designated living national treasure, who retired in May. Advance tickets were sold out and eager theater-goers formed long lines from early in the morning in the hope of securing day-of-performance tickets; the performance set a new record with the biggest audience in the theater’s 30-year history.

Takemoto performed the Sakuramaru seppuku no dan (Sakuramaru’s Suicide) section from Sugawara denju tenarai kagami (The Secrets of Sugawara’s Calligraphy). When he appeared at stage left, the full house of spectators burst into applause. There was a sense that Japanese people still had a place in their hearts for bunraku, even if only while watching Takemoto. But why is bunraku no longer popular? The long and slow performances are often blamed, and the dialogue can also be difficult to understand, even with the help of subtitles. A shortage of new practitioners is a further problem, and with Takemoto’s retirement, there are now only five living national treasures for bunraku.

Unfortunately, despite the popularity of Takemoto’s performance, the National Bunraku Theatre was only able to attract just over 100,000 spectators in fiscal 2013. As a result, in line with its stated policy, the Osaka city government cut fiscal 2014 funding to the Bunraku Kyōkai by around ¥7.3 million.

The organization is seeking new fans through such initiatives as plays for families and broadcasting video of performances, but bunraku can still only attract one-tenth of the spectators of kabuki. Many will feel it unreasonable to cut subsidies to this classic art form that must be preserved.

The Nippon Foundation is launching the Nippon Bunraku Project to promote the value of bunraku both domestically and overseas. It is building a mobile stage entirely from cypress wood and plans a first performance for Roppongi Hills Arena in Tokyo in March 2015 as the start of a nationwide tour that will last until the 2020 Tokyo Olympic and Paralympic Games. It is an initiative greatly to be applauded.

(With thanks to the National Bunraku Theatre and the National Theatre of Japan. Originally written in Japanese on October 14, 2014. Banner photo taken by Nakano Haruo.)