The Future of the Japanese Family: Diversification or Virtualization?

The family as an institution has both a social and a personal function. It can facilitate an economically prosperous lifestyle while at the same time making it possible to live with loved ones and to satisfy one’s needs for affection. Until quite recently, these two functions in most industrial countries were fulfilled through a gender-based division of labor, characterized by a breadwinning husband and a homemaking wife. Developments in the global economy over the past three decades, though, have been making this model increasingly obsolete.

Changes Engendered by a Post-Industrial Economy

Until around 1975, families with a gender-based division of labor were the norm in most industrial countries, including Japan. Such arrangements were considered ideal, and many young couples built their families on this model.

This was encouraged by robust economic growth engendered by industrialization. Men in industrial countries were able to support their families as the sole breadwinner thanks to stable employment and income, enabling their wives to devote themselves full-time to being homemakers and mothers. Arranged marriages in Japan became less common, as more young people wed the partner of their own choosing, enjoying family life marked by material affluence and mutual affection.

The growth rates of the leading industrial economies began to slacken following the 1973 oil crisis. Industrialization had reached its limits in propelling economic growth, giving way to a post-industrial service economy. As globalization advanced, factories were increasingly moved offshore, and companies began relying more heavily on automation and information technologies. High-income opportunities expanded for workers with specialized skills, but the overall number of well-paying jobs declined, causing many either to be laid off or to take low-paying, part-time positions. This heralded the arrival of the “new economy,” characterized by widening income inequalities, as described by such economists as Robert Reich and Thomas Piketty. The share of men earning enough to sufficiently provide for their families consequently declined; as a result, the gender-based division of labor of earlier generations was no longer tenable.

Lifestyle Revolution in the West

At the same time, a lifestyle revolution occurred in the 1970s in the United States, Northwestern Europe, and Oceania, with the inroads made by the feminist movement and the liberalization of sexual mores leading to the diversification of lifestyles. Many more women entered the labor force and attained economic independence. It became quite common for young people to live with their romantic partners before entering into wedlock, leading to a higher number of births outside marriage. Divorce became more acceptable, and couples gained the freedom to leave partners whom they found incompatible.

A broader range of family types appeared, as the gender-based division of labor was no longer the predominant format. Priority was placed on finding a partner with whom there was mutual affection, any economic shortfalls being covered through double-income arrangements and social welfare safety nets.

More recently, particularly since the turn of the century, the Netherlands, France, Britain, and other countries have begun recognizing same-sex marriages. Premarital cohabitation and childbirths are increasing even in Southern European countries like Italy and Spain that had previously been marked by very orthodox views on family gender roles.

Table 1. Percentage of Births outside Marriage in Major Western Countries and Japan

In Japan, families with a breadwinning father and homemaking mother became the norm following World War II through the high-growth years of postwar industrialization. This prevailed even after the oil crises of the 1970s, as male employment remained very stable until the bubble economy burst in 1992.

The job market, though, particularly for males, grew tight in the second half of the 1990s, as waves of globalization began reaching Japan’s shores. Many more young workers, both male and female, were forced to accept nonregular positions, and the wages of regular employees stopped growing as quickly as in the past. Just as in Europe and North America, the share of Japanese males capable of providing an affluent lifestyle for their dependents with their salaries alone is on a downward trend. 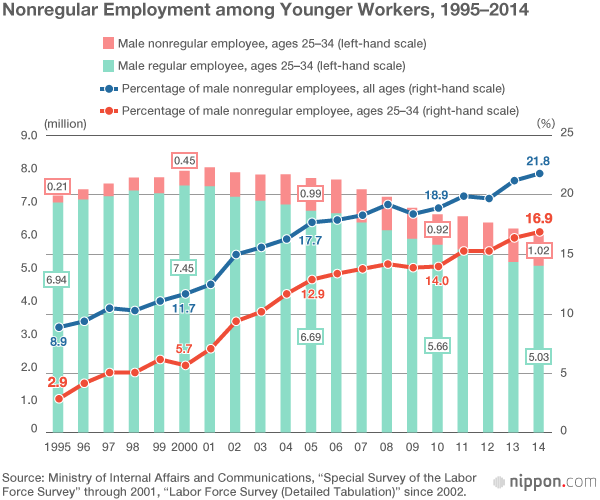 In Japan, the impact of the lifestyle revolution seen in other parts of the world has been limited, and there has not been a similar diversification of family types.

For example, while there has been a rise in the number of women in the workforce, a high proportion remain full-time homemakers during the child-rearing years compared with other industrial countries. Two of three employed married women are working as part-timers, moreover, so they are still largely dependent on their husbands’ income. In that sense, the gender-based division of labor is still largely intact.

There has also been little change in attitudes toward premarital relationships. The share of unmarried couples living together in Japan was only 1.6% in 2010, and the proportion of childbirths outside of marriage was just 2.4% in 2014. The share of “shotgun marriages” due to unintended pregnancies, on the other hand, was around 20%, meaning that unwed couples overwhelmingly chose to get married in the case of pregnancy, rather than give birth outside of wedlock. This suggests that while premarital sexual behavior may have become more liberal, people still strongly adhere to the traditional ethic of raising children in a family setting.

While the number of young people capable of supporting dependent spouses and children in families with a gender-based division of labor has declined, there has been a simultaneous rise in the number of young people who are not involved in a romantic relationship. This has no doubt been a factor behind Japan’s declining birthrate and marriage rate. As of 2010, 47.3% of males and 34.5% of females between the ages of 30 and 34 were unmarried.

As I have noted above, the share of unwed couples living together is extremely low. Only around 30% of singles are involved in a romantic relationship, a high proportion of them (around 80% of those between 20 and 34) living with and being economically supported by their parents. This suggests that in the future, as parents pass away, there could be a sharp rise in financially challenged people living alone.

Why has Japan continued to uphold the gender-based division of labor as ideal, instead of moving toward a diversification of family formats, as in other countries?

One factor is that people are still under strong pressure—institutionally, conventionally, and in terms of values—to conform to the traditional model. Labor practices, for instance, are designed for a workforce consisting of male workers with full-time housewives. Being able to devote long hours to the workplace assumes that there is a spouse looking after homemaking and child-rearing responsibilities. Pension, health insurance, and other social security schemes are also premised on the traditional family model. Families that do not fit this mold are placed at a great disadvantage.

People in Japan also give great weight to the eyes of society and are fearful of being viewed as eccentric because of their family arrangements. Full-time househusbands, for instance, are still regarded with suspicion, and seeking domestic or baby-sitting help continues to be frowned upon. One consideration behind the December 2015 Supreme Court decision upholding the constitutionality of a Civil Code provision requiring married couples to use the same surname in official matters may have been the lingering pressures to conform to conventional notions of the family.

Additional pressure people face in terms of family format is the greater value attached to filial responsibilities than to romantic aspirations. This also lies behind the phenomenon of “parasite singles” about which I have expounded in the past. The important place claimed by one’s parents has prevented many young people from following in the footsteps of their Western counterparts to pursue new family arrangements that prioritize their relationship with their partners.

Meeting Affection Needs without a Partner

Fewer people are getting married in Japan today, and fewer people are dating, swelling the ranks of singles without partners. How, then, are they satisfying their desires for a loving relationship? Such relationships can be regarded as meeting three major needs: those for communication, romance, and sex. These three needs are increasingly being met today through “virtual families.”

A good rapport with one’s parents can satisfy one’s needs for communication, as can camaraderie with same-sex friends. The social media explosion is enabling people to keep in touch with one another, even if they cannot meet in person. Pets are now sometimes treated as members of the family, and this has helped to meet the needs for affection among Japan’s singles.

Many people appearing to be satisfying their needs for romance through their infatuation with teen idols and celebrities, as well as with characters from role-playing games or manga. This is a virtual romance with 2- or 2.5-dimensional figures. Males, moreover, have access to a broad range of services providing pseudo-romantic experiences, such as kyabakura hostess bars, maid cafés, nightclubs, and JK (joshi kōsei) “industries,” in which patrons spend time with high-school girls. People are thus able to buy the feeling of being in a temporary romantic relationship.

As for sexual needs, particularly of males, pornography can now be easily accessed due to the spread of the Internet and audiovisual equipment. Many men also take advantage of the services offered by the sex industry.

The swelling ranks of singles who are not in a romantic relationship have been accompanied by the growth of industries offering opportunities to meet their needs for affection through virtual families and virtual romance. The number of such young singles in Japan, incidentally, has been estimated at 10 million, of whom 4 million claim that they have no interest in finding a partner. 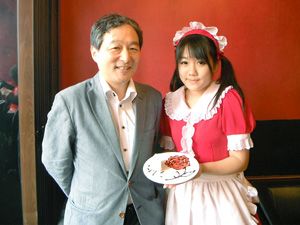 The author (left) at a maid café in Hong Kong.

The virtual family industry, of course, also caters to people who do have a partner or family. Many people have long sought out virtual objects of affection in addition to having real-life ones. Married couples keep pets, many married women are avid fans of the Takarazuka all-female revue, and men haunt hostess bars and nightclubs. What is striking today, though, is that many more people are relying solely on virtual relationships, in the absence of a real family.

The virtual services to meet these needs are also increasingly being exported around the world. Cat cafés can now be found in many different countries, and Japanese anime, idols, maid cafés, and other features of “cool Japan” are being embraced by Asian and other countries.

This is not to say that there has been no diversification of the Japanese family over the years. In 2015, the city government of Shibuya in Tokyo issued an ordinance that officially opened the door to same-sex partnerships. No longer is it unusual to find sharehouses where people without blood ties live communally, nor for women to continue working while their husbands look after the kids. The broader range of acceptable family options could also encourage more couples to give precedence to personal, romantic preferences over filial responsibilities.

Japan is now in the midst of a transition. It could either head toward a greater prevalence of virtual families or see a revival of real families through a diversification of family arrangements.