Islands of Solitude: A Psychiatrist’s View of the "Hikikomori"

Society Dec 13, 2017
Some estimate that up to 1 million people have withdrawn from society in Japan and are living holed up in their rooms. A psychiatrist who has worked with these recluses and their families for many years presents a first-hand view of what their lives are really like.

In Japan today, many young people are disconnecting themselves from society. They have come to be known as hikikomori (recluses), or more formally shakaiteki (social) hikikomori. Though their existence is widely recognized, their true situation is still far from being generally understood. They all have different backgrounds and circumstances and have withdrawn from society for different reasons. So, what can we say about this disparate group?

First, a definition: Hikikomori are individuals who (1) do not work or attend educational institutions, (2) are not considered to have a mental disorder, but (3) have remained at home for six months or longer without interacting personally with anyone outside their families. The third point is the most important. These people have no friends and are isolated from society, even though they may be living in the middle of a teeming city.

Some say there are as many as 1 million hikikomori in Japan. Add to that figure the 2 million parents who may have lived with them for decades and the sum comes to almost 3% of the population over 20 years old. This is a number that cannot be ignored. It demonstrates the immense scale of this social issue. Even so, many people remain indifferent.

One widely held view is that hikikomori are lazy or spoiled by parents who are willing to support their jobless offspring. I would like to emphasize that nobody becomes a social recluse because they enjoy it. If it were truly a case of being lazy or spoiled, why do hikikomori and their parents suffer so much?

Two key words for understanding social recluses are “shame” and “conflict.” Hikikomori feel a deep sense of shame that they cannot work at a job like ordinary people. They think of themselves as worthless and unqualified for happiness. Almost all feel remorse at having betrayed their parents’ expectations.

At the same time, they are beset by internal conflict between the self that cannot go out into the world and the self that constantly condemns their failure to do so. Many say that they want to disappear or that they wish they had not been born. Some become so exhausted by this internal struggle that they cannot even get out of bed. And the torment may continue for years or even decades.

In serious cases, hikikomori almost never leave their rooms other than to use the toilet or shower. Terrified of contact even with other family members, they feed themselves by raiding the fridge at night when everyone else in the house is sleeping. Conversation is nonexistent. One mother lamented that her son had not talked to her since he was 12 years old, so she had never heard his adult voice.

Hikikomori keep the shutters and curtains of their rooms closed at all times to conceal their presence. They listen through headphones to mute the sound when they watch television or use their computer. They walk with soft footsteps. Some do not turn on air conditioners or heaters even in the dog days of summer or the deep of winter. This is partly to avoid the notice of family members and neighbors, and partly because they do not feel they deserve to use these appliances. I wish people would better understand the reality of their troubled lives before dismissing them as spoiled and lazy.

People Who Want to Work But Cannot

Hikikomori are frightened of being asked, “What are you doing now?” One of my clients told me, “I’m so afraid of that question that I flee from place to place like a fugitive.” As a result, this client had cut off communication with friends, acquaintances, and others.

Some 60% of hikikomori are said to have had experience in the workforce. Many struggled under outrageously heavy workloads, putting in more than 200 hours of overtime per month, or were subjected to chronic power abuse by superiors. This has made work an object of terror and physiological rejection.

As noted in the definition above, hikikomori are not suffering from a mental disorder. There is no medicine or treatment to speak of for their condition, so one can only watch over them and observe how they change. Some want to work, but have become unable to. People tend to have a vague impression that hikikomori are mentally ill or weak. But instead of seeing this condition as a mental issue, we may need to look at it as a labor problem—the existence of a group of people who wish to work but cannot. 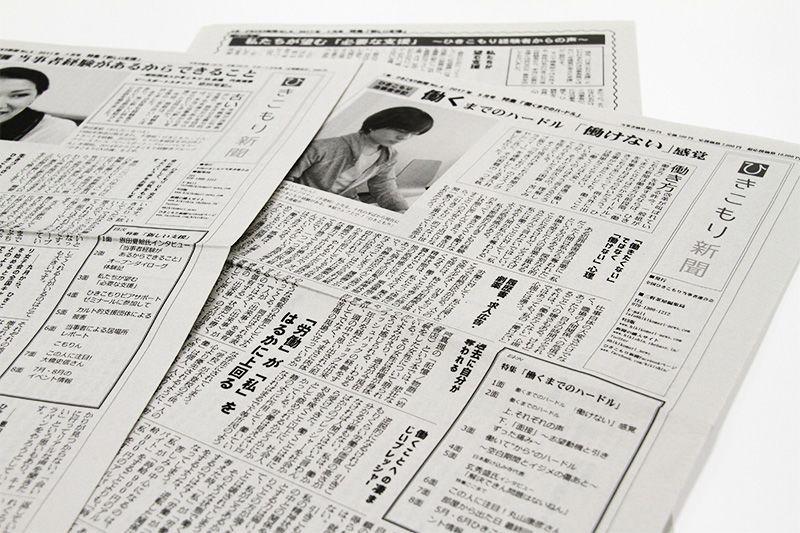 The first edition of the Hikikomori Shimbun newspaper, published in November 2016. The contents, written by hikikomori and others involved with the issue, include interviews, columns, and information about self-help groups and counseling.

How can hikikomori be rescued from their grave condition? Attempts to force them out of their seclusion against their will have proved unsuccessful. But over the past several years a range of activities and support networks have been established by hikikomori themselves. Working with counselors and psychiatrists, they have arranged meetings and even started a newspaper with some articles in English. Meanwhile, in some cases counseling of parents has shifted the dynamics within the family and allowed hikikomori to change for the better. Although it will take time, the only path forward is to find opportunities for these individuals to reconnect with the society they have withdrawn from and gradually broaden public understanding so as to create a more welcoming environment for them.

Hikikomori want to establish ties with society, but do not find it possible to do so. Social withdrawal may be their last-resort strategy for staying alive within this society, and the only option left for them to preserve their own dignity.

(Originally published in Japanese on November 22, 2017. Banner photo: Former hikikomori Ishizaki Morito holds a copy of the Hikikomori Shimbun, a newspaper that he helps produce. He also now works for a company set up by his family, operating its information system, doing marketing, and recruiting new graduates.)