Why Japanese Men Still Don’t Get It: Structural Roots of Sexual Harassment

Society Culture May 18, 2015
What do recent stories focusing on sexual harassment in Japan say about the social conditions of Japanese women? Professor Muta Kazue argues that, despite a growing awareness of the issues, such incidents will continue until Japan overhauls the underlying systems that perpetuate workplace discrimination against women.

Sexual harassment has been a hot topic in the Japanese media of late. The June 2014 incident involving sexist heckling in the Tokyo Metropolitan Assembly made big headlines. The following October, NHK (Japan Broadcasting Corporation) invited me to talk about sexual harassment of older women on its morning program Asaichi!, and the segment elicited such a response that the program revisited the topic in December. In February this year, the Supreme Court ruled against two Osaka employees who had sued their employer after being disciplined for repeatedly subjecting their female subordinates to crude sexual remarks. And just this past March, outrage erupted on the Internet over the sexist content of two promotional videos released by Lumine, a high-fashion shopping mall chain, ostensibly to “support working women.”

The term sekuhara, a Japanese contraction of the English sexual harassment, came into currency in 1989, when a woman filed Japan’s first sexual harassment lawsuit in a Fukuoka district court. The term caught on quickly and won a  1989 “new word” prize. A decade later, the National Diet amended the Equal Employment Opportunity Law to include a provision obligating employers to prevent sexual harassment in the workplace. That was some 15 years ago. What do recent events say about Japanese society and its ability to change?

In terms of their outcomes, of course, the incidents indicate some degree of progress. In its February decision, the Supreme Court ruled that the employer was justified in demoting and suspending two male employees, calling their ongoing comments “highly inappropriate acts of sexual harassment.” In doing so, the court rejected the male employees’ argument that their remarks were harmless jokes intended to lighten things up in the workplace.

In the court of public opinion, men as well as women gave an emphatic thumbs-down to the legislators who yelled, “Why don’t you hurry up and get married!” at a female colleague on the floor of the Tokyo Metropolitan Assembly. The Lumine commercials advising young working women to cultivate a “cute” appearance and pleasing demeanor so as to earn their male colleagues’ approval were pronounced hopelessly antiquated and inappropriate. Both incidents provoked a deluge of angry and disgusted reactions, which resulted in retractions and apologies. Such outcomes clearly indicate progress in public awareness of the issue of sexual harassment. Certainly the result would have been quite different 25 years ago, before the concept of sexual harassment had even taken hold. 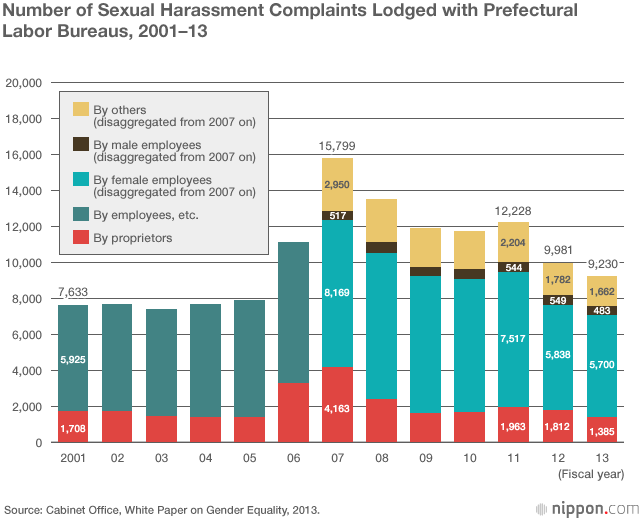 Moreover, once the concept of sexual harassment had taken hold, it became easier to recognize and discuss other forms of discrimination and persecution. After sekuhara came pawahara (power harassment), akahara (academic harassment), and morahara (moral harassment). A recent and distinctively Japanese coinage is bukahara (bukatsudō harassment), referring to bullying in school clubs. Such words have power, and one of the most empowering has been matahara (maternity harassment), efforts to force pregnant employees out of the workplace or discourage them from taking maternity leave in accordance with the law. This last term has given Japanese women the vocabulary to affirm their right to work and have children at the same time and to slam the social and corporate norms that would deny them that right.

In this sense, then, there has been progress. Still, the gut reaction of many Japanese women to recent events has been one of disgust and frustration at the deep-rooted, antiquated attitudes underlying such incidents. For elected members of the Tokyo Metropolitan Assembly to interrupt a fellow member’s legitimate question concerning the depopulation issue by shouting at her to get married and have children herself reveals an almost mind-boggling disrespect for her position as a public servant, not to mention her freedom of choice and right to privacy. Then consider the male employees who, over a period of months, drove their female subordinates to the brink of resignation with lewd comments, and then went so far as to sue their employer for disciplining them over such “harmless kidding.” And what of the presumably sophisticated fashion retailer that decided to show its “support for working women” by urging them to cultivate a cuter image among the men at the office via a personal makeover? The persistence of such attitudes in this day and age has many women wondering whether things will ever really change.

Yes, everyone knows the word sekuhara nowadays, and everyone knows that sekuhara is against the rules. Still, when it comes down to actually dealing with women in the workplace, men still don’t get it. They seem to have no fundamental understanding of why women are offended by their sexual comments, innuendos, and advances, or why it is a social problem.

Somehow it never occurs to these perpetrators that their own behavior might be considered harassment. After all, they’re popular with the girls at work; no one is going to object to a little touching. And their lewd comments almost always elicit a chuckle. And what’s wrong with telling a woman that she should get married? Doesn’t a woman’s happiness revolve around marriage and children? And isn’t “cute” the highest compliment one can pay a young woman, anyway? Such male attitudes are far more powerful and deeply engrained than any emerging understanding of sexual harassment. This leaves a gaping perception gap between Japanese men and Japanese women, most of whom have long since rejected men’s narrow ideas about femininity, whether or not they wish to pursue careers themselves.

Women Who Can’t Say No

A prefectural assembly member I know endures so much harassment from her male colleagues that she refers to her workplace as Jurassic Park. Nor are local legislatures the only places where predatory living fossils rule supreme.

But despite the chasm in attitudes as to what is acceptable, why do Japanese women put up with it? While it is true that more and more of them are saying no to male-imposed gender roles, they are not saying it very loudly.

Most societies expect women to be relatively passive and accommodating, but Japan imposes unusually high expectations in this regard, partly because it values harmony and cooperation among all its members. Outspokenness is not considered a positive attribute in men or women, but women in particular are taught from an early age to be submissive and considerate. The impulse to get along, to defer to others’ feelings, and to avoid conflict is almost reflexive.

In fact, this tendency was clearly an issue in the case that found its way to the Supreme Court. The male employees argued that their female subordinates never came out and told them that their crude sexual comments were unwelcome. Of course they attempted to convey their displeasure indirectly, with their silence or their facial expressions, but clearly these messages failed to penetrate. Tokyo Metropolitan Assembly member Shiomura Ayaka betrayed no sign of anger at the denigrating catcalls from her colleagues, just confusion. The woman featured in the Lumine commercial has a similar reaction to her male colleague’s insulting banter. Trained from childhood to be “nice girls” and cultivate likability, Japanese women find it very difficult to express anger in a straightforward manner.

This passivity is so deeply engrained that it can even prevent a woman from confronting a man who is groping her on a crowded train. In most cases, the best she can manage is a muffled plea. If a woman had the effrontery to yell “Cut it out!” in such a situation, all she would get for her trouble would be raised eyebrows all around, even though she was the victim. Such a reaction is simply not ladylike. The Japanese language itself, with its gender-specific usage, inhibits women from expressing refusal or outrage in direct terms.

Perhaps the most common remark one hears from men accused of sexual harassment is that they had no idea the woman was offended. A senior police officer, explaining why he repeatedly squeezed the thigh of his young female partner as they rode in their patrol car over a period of half a year, said, “It felt good, and she didn’t say anything, so I kept doing it” (Asahi Shimbun, June 8, 2012, evening edition). Such insensitivity is exasperating, but it is only to be expected in a culture that counts on women to be pleasant, compliant companions regardless of the indignities they endure. In such a society, we can hardly expect men to spend much time or energy considering women’s innermost feelings. Nor can we expect an end to sexual harassment.

The problem is that a disregard for the dignity and value of women is built into the very fabric and systems of our society. Japanese corporations continue to demand an open-ended time commitment from their core (management track) employees (on the assumption that someone else will take care of the home and children) while treating everyone else as temporary help. The government talks about encouraging women’s full-fledged participation in the labor force, but the percentage of female employees classified as temporary or part-time, and thus excluded from the core of the workforce, continues to rise. Meanwhile, pregnant women are routinely pushed to resign or harassed into quitting. While our leaders pledge to marshal their policy resources to tackle Japan’s low birthrate, Japanese women are being penalized for having children, and growing numbers are sinking into poverty.

In this way, the underlying systems of Japanese society continue to deny women their right to work and live. The incidents that have grabbed headlines in recent months may strike some of us as bizarre anachronisms, but until Japan’s discriminatory systems are reformed, such sexual harassment will surely continue.

(Originally published in Japanese on April 21, 2015. Banner photo: Beneath a banner proclaiming “No! Sexual Harassment,” a team of lawyers announces the court’s ground-breaking decision in the first successful legal action against sexual harassment in Japan, Fukuoka, April 16, 1992. © Jiji Photo.)