One Look Suits All: Japan, Land of Uniforms

Society Culture Apr 27, 2016
Japan is full of people in uniform, both at school and on the job. And then there are those who voluntarily don “pseudo-uniforms,” like the standardized suits of student job hunters. Why does the culture of the uniform have such a strong hold on the Japanese?

A Sea of Uniformity

Japan must be one of the most uniformed nations in the world. Student uniforms are seen from elementary through high school and sometimes even at colleges. And employee uniforms (mainly for women) are worn at workplaces ranging from tiny firms to giant corporations, from lavish showrooms to little shops selling mobile phones. Where else does the culture of the uniform thrive as it does among the Japanese?

What I think is especially interesting is that we see people voluntarily wearing virtually identical clothes even in some cases where uniforms are not required. A good example is the student job-hunter look: black suits of a standard design that reveal nothing of the wearers’ individuality. For practical purposes these are the same as uniforms. So are the prim suits that mothers buy for themselves and the stereotyped outfits they get for their children as they seek spots for them at private elementary schools. “Pseudo-uniforms,” we might well call this attire.

So Japan’s uniform-wearing culture features two types of uniform: the mandatory regular uniform and the voluntarily worn pseudo-uniform. Let’s look at both.

Advantages of the Mandatory Uniform

Regular uniforms, the mandatory attire for those attending a particular school or working at a particular job, have a number of functions. I think we can sum them up in the following five items.

A uniform identifies the wearer’s status as a member of a student body, a sports team, or the staff at a workplace, making it readily apparent to others what role the person is playing. The uniforms worn by hospital nurses and department store clerks are good examples of this.

Wearing a uniform helps motivate people to perform their role at their school or workplace and appeals to their pride. Consider the red jackets worn by the Shinkansen cleaning crews of JR East Tessei. Cleaning is important, but it is not a glamorous job by any means. By outfitting its cleaning team members in bright red jackets, Tessei called attention to them, boosting their pride in their jobs and enhancing their motivation. 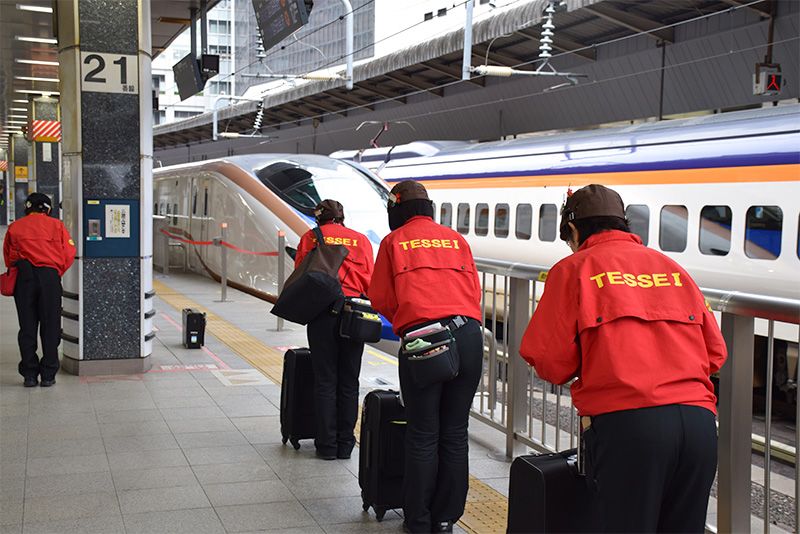 A Tessei cleaning crew wait to board a bullet train arriving at Tokyo Station. (Photo courtesy of JR East Tessei)

The special uniforms worn only by those with advanced skills have a similar effect. For example, copilots’ uniforms have three stripes on their sleeves or shoulder epaulets, while pilots have four. This is another way of appealing to pride and building motivation.

The uniforms worn by factory workers are an example of regulation wear that enhances safety and comfort. The uniforms are designed to be easy to work in, and they help protect the wearer from harm on the job.

Uniforms can also promote the brand image of a business. A typical example is the attire of the female flight attendants on Singapore Airlines. Their ethnically inspired uniforms have been unchanged since 1972 and have become a widely recognized trademark for the airline, greatly boosting its brand.

Many uniforms also enhance the organization’s recruiting power by making people want to work where they are worn. The uniforms of the “cast members” at Disneyland are a good example. 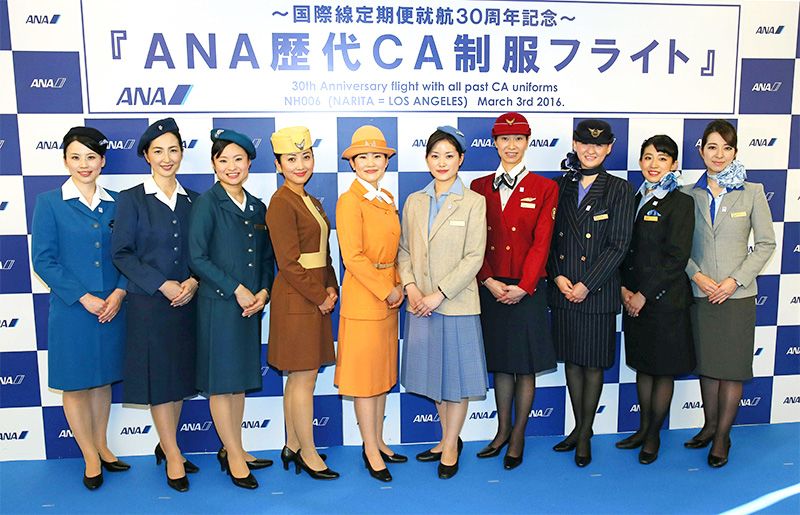 All Nippon Airways flight attendants model the uniforms worn by cabin crews since the airline launched its international service 30 years ago, at an event at Narita Airport, March 3, 2016. (© Jiji)

So uniforms serve various purposes, both for the organizations that adopt them and for those who wear them.

The Fading of the Anti-Uniform Movement

Despite their advantages, uniforms were formerly the target of considerable opposition. Thirty or 40 years ago, the anti-uniform movement was in its heyday, with mandatory student uniforms considered to be symbolic of oppression by schools. But today this movement is in abeyance—if indeed it exists at all. Conversely, many schools have gained more applicants and enhanced their test score rankings after adopting student uniforms that are fashionably designed and reflect young people’s input. These uniforms have helped boost the brand of the schools where they are worn.

The school uniforms of yesteryear were seen as symbols of the establishment, and students generally found them stifling to wear. One reason they are no longer so disliked is that the materials have changed and the designs have become varied. Thanks to improvements in synthetic fibers, today’s uniforms are light, use fabrics that breathe, and do not need to be ironed. On the design front, optional items like vests, sweaters, and blouses give students leeway to introduce variations to their look.

This is certainly quite a transformation from the days when school uniforms were rigidly identical, looked and felt heavy, and were hard to take care of. Uniforms now allow students to enjoy fashionable looks that only they and their contemporaries can sport. Thanks to improvements in design and materials, they have changed from symbols of the establishment to clothing that students themselves want to wear. 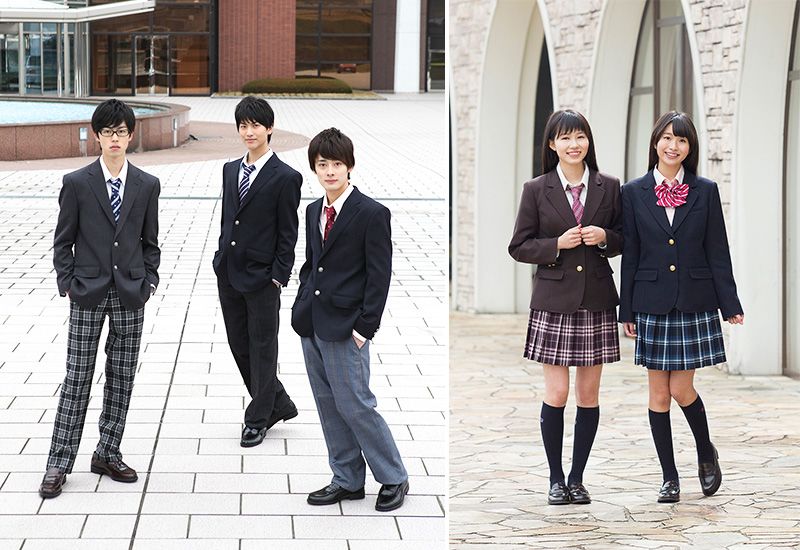 A Selective Revival in Corporate Uniforms

This is not to say that the status of the uniform is unassailable in Japan. For example, many companies stopped having their female office workers wear uniforms after the Equal Employment Opportunity Act came into force in 1986. These uniforms came under attack as symbols of gender discrimination. And eliminating them was also in line with the business world’s drive to cut costs. We cannot expect to see this trend go away.

In addition to paying for office uniforms, employers also need to provide changing spaces. And there is little practical purpose in requiring them to be worn in offices where employees do not have face-to-face contact with customers. Companies have also been cutting costs by eliminating staffed reception desks and the practice of having female employees prepare and pour tea for their colleagues and guests. Doing away with the “OL” (office lady) uniform is in keeping with this streamlining of business practices.

The story is different, though, at workplaces serving customers directly. In 2016, Bank of Tokyo-Mitsubishi UFJ for the first time adopted uniforms for all 16,000 of the employees, both male and female, staffing its customer counters. And other institutions, such as Kagawa Bank and Chukyo Bank, have reintroduced uniforms. These moves come from a focus on the advantages of this clothing, as described above. The adoption of uniforms at these banks may also be identified as an element of customer service. 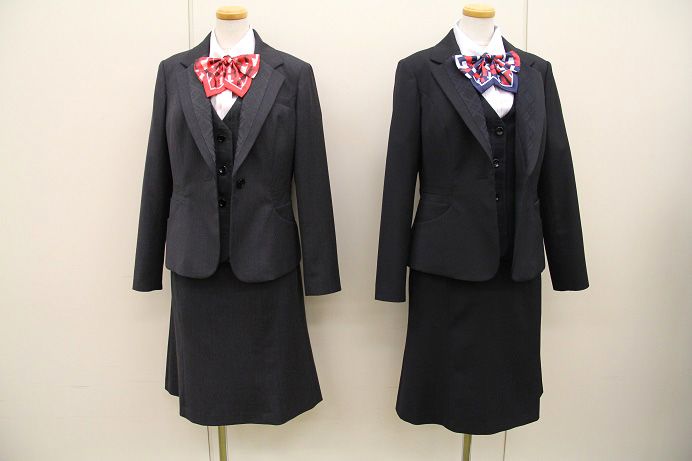 Other employers may follow suit, so to speak, and decide to reintroduce uniforms for their employees, but if they do, it will be a decision based on a cost-benefit analysis. Companies have become quite cost-conscious, and since uniforms represent an added expense, firms will adopt them only if they determine that the advantages of doing so are sufficient to justify the outlays involved.

The Unthinking Wearers of Pseudo-Uniforms

Next let us consider the “pseudo-uniform.” The reasons Japanese people eagerly buy and wear this sort of standardized attire, even though it is not required, may be summed up as follows.

The desire to do whatever one can in advance to prevent failure gives rise to demand for the pseudo-uniforms worn by students during their job hunts and by mothers and children during the competition for spots at private schools. People do not want to leave open the possibility that they will look back and rue what they wore as having caused them not to get their desired job or school seat. So they end up picking the same sort of outfit as everybody else. The pseudo-uniform is a manifestation of the Japanese aversion to failure.

Another element is people’s desire to avoid standing out from the crowd. This also powers demand for pseudo-uniforms. And this demand is likely to persist, changing only if and when Japanese society comes to accept diversity and to take the expression of individuality as the norm.

Job hunters’ suits have become much more standardized than they used to be. We no longer see any variation in them. This is a result of the profusion of messages purporting to tell students what will cause them to succeed or fail in their hunt for a job, along with the rapid growth in the number of stores that sell suits specifically identified as being for job hunters. Twenty years ago, this flood of information and supply of standardized suits did not exist; students picked their job-hunting wear based on their own ideas and input from their peers. Now they are offered a ready-made option. This is a current that is hard to resist.

Much the same can be said for the elementary school admission-seeking outfits. The selling of these pseudo-uniforms has become a business. Japanese companies are clever at this sort of standardized merchandising. They have created a nationwide marketplace where people can simply buy a product without giving any thought to alternatives.

Supported by the ongoing demand both for regular uniforms and pseudo-uniforms, Japan’s status as one of the world’s most uniformed lands seems secure for the foreseeable future.