Teen Voters and Politics in Japan

Politics Society Aug 19, 2016
This July, in the first national election since the lowering of the voting age, young people seemed to endorse the status quo. But voting is not the only form of political activity. Adult voters should reconsider their own approach to politics.

Under a revision of the Public Offices Election Act that came into effect in June 2016, the voting age in Japan was lowered from 20 to 18. Due to the combination of a low birthrate and longer lifespans, senior citizens (age 65 or over) now account for a quarter of Japan’s population. And older people are more likely to vote than young people: In the most recent election for the House of Representatives (the lower house of the National Diet) in 2014, for example, 68% of citizens in their sixties went to the polls, but only 32% of those in their twenties turned out. This combination of factors has led some people to complain that Japan has a “silver democracy”—a system in which silver-haired seniors hold the upper hand and young people’s wills tend to be neglected.

Meanwhile, last summer a student group called “SEALDs” (Students Emergency Action for Liberal Democracy) played a prominent role in organizing large-scale demonstrations in an attempt to block the passage of security legislation proposed by the government. In this context, many people thought that today’s young people were politically active and that the lowering of the voting age might change Japanese politics by allowing teenagers to participate directly in the election process.

In fact, though, the newly enfranchised 18- and 19-year old voters make up a mere 2% of the total electorate. And it is fair to say that their participation had no significant effect on the results of the July 2016 election for the House of Councillors (the upper house of the Diet), the first nationwide election following the lowering of the voting age. The cynical voices of young people who said, “Even if I vote, it won’t make any difference,” turned out to have been accurate.

Furthermore, according to reports in the major dailies, voters in their teens and twenties were the strongest supporters of the ruling Liberal Democratic Party, with about 40% of them choosing it in the proportional-representation balloting. The media had reported on the SEALDs movement as representing a groundswell of opposition to the administration of Prime Minister Abe Shinzō among young people, but the election results contradicted this, with young people giving the nod to the political status quo. Not only were the new young voters too few in number to change the outcome of the election, but they showed no will to act as agents of change.

The Relatively High Turnout of the New Voters

As is always the case among those voting for the first time, many of the newly enfranchised young voters in the recent upper house election felt hesitant. Some declared that they could not take on such a heavy responsibility. Such sentiments show that they take the action of voting seriously. At the same time, some were quoted as saying that if they did go to the polls, they would only be able to pick candidates they had seen or heard.

Older Japanese, meanwhile, were eager to put an end to the “silver democracy” image and maintain the legitimacy of the current system of representative democracy by encouraging participation. The government, commentators, and media organs all strove to get the new young voters to go to the polls. The government enlisted popular figures like the girl group AKB48 and 18-year-old actress Hirose Suzu as poster girls for its campaign. Commentators and media outlets did their part by trying to persuade young people to adopt a relaxed attitude toward voting.  For example, sociologist Furuichi Noritoshi even advised them to start by taking a lighthearted approach to picking a candidate, such as by drawing lots or picking them by their looks or the color of their campaign posters (Asahi Shimbun, evening edition, June 25). 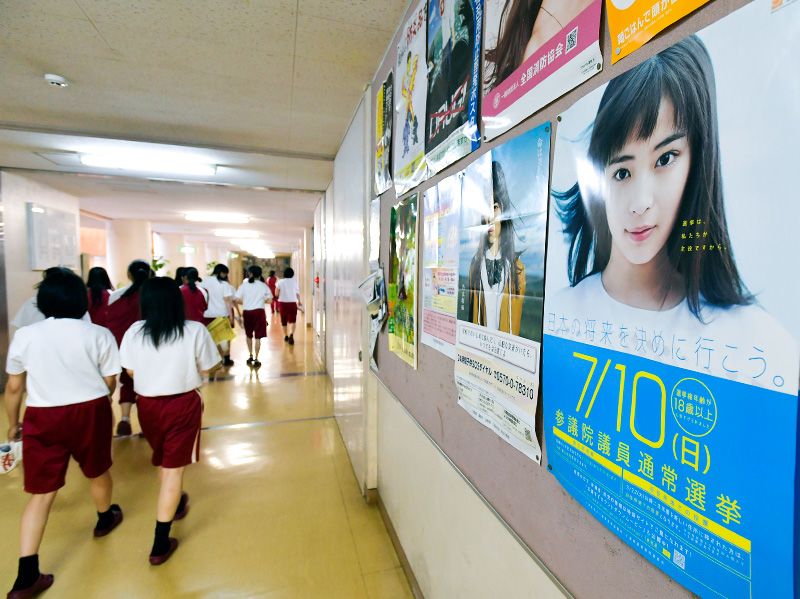 According to the final tally, 51.17% of 18-year-olds and 39.66% of 19-year-olds voted in the July 10 upper house election. These turnout rates were lower than the total average of 54.70%, but they were considerably higher than the 33.37% rate for voters in their twenties. As for the remarkably higher rate for 18-year-olds than 19-year-olds, this can be attributed to a number of factors: Many of them are still in high school, where they received voter education. And they are likely to be living at home with their parents, with whom they may have gone together to the local polling station. Also, they realized, “We’re unique as the first eighteen-year-olds who can go to the polls after the lowering of the voting age” (Asahi Shimbun, July 3). In other words, they were probably motivated by the chance to participate in a historic event. Considering the low turnout among those in their twenties, we cannot go so far as to say that young people as a whole have become more interested in voting, but we can hope that the increase in the number of those who have made it to the polls at least once will contribute to a gradual improvement in young voters’ turnout rates over the long term.

One may still ask, of course, to what extent making people feel more relaxed about voting contributes to the effectiveness of the system of representative democracy. In the past there was a tendency for people to vote for a candidate with whom they had shaken hands. Some may still do so. But this sort of approach to vote gathering came under criticism during the political reform drive that got into full swing in the 1990s, when the idea was to get voters to make their choices on the basis of the parties’ policies. Encouraging today’s new young voters to pick candidates simply because they have heard or read of them seems like a regressive move in that sense.

The issue of how people decide to vote is not limited to under-20 voters. A major goal of the process of political reform and regrouping of political parties in the 1990s and 2000s was to establish a two-party system under which voters would make their choices largely on the basis of the parties’ electoral manifestoes. This culminated with the change of government in 2009, when the long-ruling Liberal Democratic Party was replaced by the Democratic Party of Japan. But the DPJ’s subsequent performance, which was widely panned, resulted in a sharp loss of confidence in manifestoes as a decision-making tool. And in the latest national election campaign, Initiatives from Osaka was the only party to produce a manifesto setting forth numerical targets. It is no surprise that teenagers who tried to study up on the parties’ policies in advance of the upper house vote ended up lamenting that they were unable to figure them out. And virtually no older citizens are deciding how to vote by comparing the parties’ manifestoes.

In an editorial on July 10, the day of the upper house election, the Mainichi Shimbun suggested some criteria voters might use to make up their minds: (1) by deciding how they assess the performance of the Abe administration since it was inaugurated in December 2012, (2) by deciding whether they want to see the ruling coalition or the opposition to come out with more seats than before, and (3) by identifying the issue that concerns them the most and picking the party or candidate whose views on it most closely match their own.

Meanwhile, a hot topic in the weeks preceding the upper house election was the issue of Tokyo Governor Masuzoe Yōichi’s use of political funds for private purposes. This led to calls for voters to pay more attention to the character of candidates for public office (Mainichi Shimbun, Tokyo, June 19). And during the course of the upper house election campaign, the director of the LDP’s Youth Division was quoted as offering “attractiveness as a human being” as a criterion for citizens deciding which candidate to vote for (Mainichi Shimbun, Tokyo, June 24, evening edition). Also, the Tōkyō Shimbun and Chūnichi Shimbun carried series of articles focusing on candidates’ personalities, including particulars like their favorite books, sayings, and places. These developments were a reversal of the previous trend of urging voters to look at policies rather than personalities.

Should voters decide based on their assessment of the current administration, the parties’ policy stances, or the candidates’ personal character? The addition of the new 18- and 19-year-old voters to the rolls seems to have made older voters notice that they themselves were not really sure. One 18-year-old who decided not to vote this time declared, “It’s better not to vote at all than to vote irresponsibly” (Asahi Shimbun, July 13). This is a perspective that everyone should consider. Before we undertake to “enlighten” young voters, we need to reexamine our own ideas about the criteria for deciding how to vote.

In response to the dismissive remarks by some newly enfranchised young people, such as “Our single votes don’t have any meaning,” some commentators  suggested that local politics should offer young voters an arena where their votes will count for more than at the national level. But the contacts that voters have with politicians nowadays are more likely to be via the media than through handshakes, and they tend to be less interested in local politics than in politics at the national level. For example, in the July 3 election for mayor of Ukiha, a city in Fukuoka Prefecture—the first election held after the lowering of the voting age—the overall turnout was 56.10%, but the figure for teenage voters was only 38.38%.

So there is a tendency for today’s electorate, and young people in particular, to feel a greater sense of involvement in politics at the national level. This does not mean, however, that members of the younger generation lack interest in what is going on around them. Particularly since the Great East Japan Earthquake in 2011, we have been seeing many young people taking part in volunteer disaster-relief activities and initiatives relating to reconstruction, poverty alleviation, improvement of working conditions, and promotion of local economies, participating in nongovernmental and nonprofit organizations and sometimes setting up local enterprises. Even if they do not think of these activities as political, their work in pursuit of the common good, including the reconciliation of various interests, is indeed “politics.”

Meanwhile, though the SEALDs and other young protesters who have taken to the streets since last year were forced to recognize the results of the upper house election as a defeat, their activism is noteworthy from a different angle: Even though they were in the minority at the polls, the great amount of media attention that they won shows how effective their non-electoral political activity was.

Political action can and should take many shapes. Today’s older Japanese citizens seem to believe that it is better to keep quiet about politics and express their will through their votes in the privacy of the ballot box. Perhaps they can learn something from the non-electoral political involvement of the younger generation.

(Originally published in Japanese on July 26, 2016. Banner photo: An 18-year-old high school student votes in the recent House of Councillors election at a polling station in Shinjuku, Tokyo, on July 10, 2016. © Jiji.)