Apple Shifts Focus to Japan with Launch of iPhone 7

Economy Oct 5, 2016
The recently launched iPhone 7 in Japan supports Sony’s FeliCa contactless technology, allowing users to make payments with their phones via Suica and other mobile payment methods. Apple, looking to raise its profile in Japan, teamed up with JR East to bring Suica to the iPhone, while Sony hopes the move will help turn its technology into a global standard.

Eye on the Japanese Market

Apple’s September 16 launch of the iPhone 7 and iPhone 7 Plus in Japan was a highly anticipated event, as the big three mobile carriers NTT Docomo, KDDI, and SoftBank had all announced record-setting orders for the devices at their respective kickoff events. While the latest version of Apple’s smartphones is popular worldwide, retailers in Japan have had a particularly hard time keeping the handsets in stock.

In releasing the iPhone 7 Apple is looking to Japan to help reinvigorate sales of its trademark smartphone. It has, for instance, included features that have become standard in the Japanese mobile market, such as dust and water resistance.

Domestic wireless providers developed watertight phones early on in response to user demand, with Sony being the first introduced this technology to its Xperia model smartphones. Industry-leading Samsung soon followed with its Galaxy series, giving Apple little recourse but to adopt this feature in the iPhone 7.

The iPhone 7 is also the first to offer Apple Pay in Japan. Apple had rolled out the service in the United States, Britain, and China but had yet to do so in Japan, which already boasts an extensive contactless payment market. Apple referred specifically to this decision during the iPhone 7’s unveiling in San Francisco on September 7, eliciting enthusiastic cheers from Japanese reporters attending the event (but from few others in the crowd).

The move was unprecedented, as in introducing Apple Pay in Japan, Apple chose to forego its own near-field-communication technology in favor of the Japanese-developed FeliCa system.

Developed by Sony, FeliCa powers electronic payments at a majority of Japan’s copious convenience stores and on many taxis. It is also the base for transit smart cards, including JR East’s widely used Suica. As of early 2016 the rail company had issued 57 million cards, which serve both as commuter passes and e-money, and signed up 3.7 million users for its cellphone-compatible Mobile Suica service.

This is the first time Apple has in any great degree broken away from its one-size-fits-all approach for the iPhone. To now it has offered identical models in all markets worldwide to keep production costs low and maximize profits.

Apple has seen demand for its handsets taper off in the United States and China in the face of growing competition from Samsung and other companies. Sales in Japan, though, have remained strong. According to a 2015 survey by the MM Research Institute, iPhones accounted for 53.4% of smartphone shipments domestically. Apple is looking to further grow its share here by introducing handsets that are not only water resistant but are also compatible with NTT Docomo’s dedicated bandwidth, FeliCa technology, and other aspects specific to the Japanese market.

The move may not bode well for Galaxy or such major Japanese smartphone makers as Sony, Sharp, and Fujitsu, however. Mobile users wanting water resistance and FeliCa compatibility had hitherto no choice but to purchase phones running the Android operating system. But with Apple fixing these shortcomings, iPhone could now appeal to a broader spectrum of smartphone users.

JR East hailed the decision to make the iPhone 7 in Japan FeliCa compatible. Vice President Ogata Masaki at the unveiling ceremony on September 7 shed light on the talks the two companies carried out, saying the launch was “the culmination of an intimate and trusting partnership forged with Apple.” He also expressed gratitude to Apple and JR East’s hopes for mutual success going forward.

The talks no doubt centered on convincing Apple, one way or another, to adopt the FeliCa standard. JR East risked losing Mobile Suica customers if the market share of iPhones, which were incompatible with the service, expanded. Having already invested heavily in its mobile payment system, the company was eager to avoid such a development at all costs.

Apple, on the other hand, was no doubt more interested in having JR East switch to the Apple Pay standard. The fact that Suica is already used at 4,710 railway stations, 30,000 buses, and 350,000 convenience stores around Japan, though, made this logistically impractical. 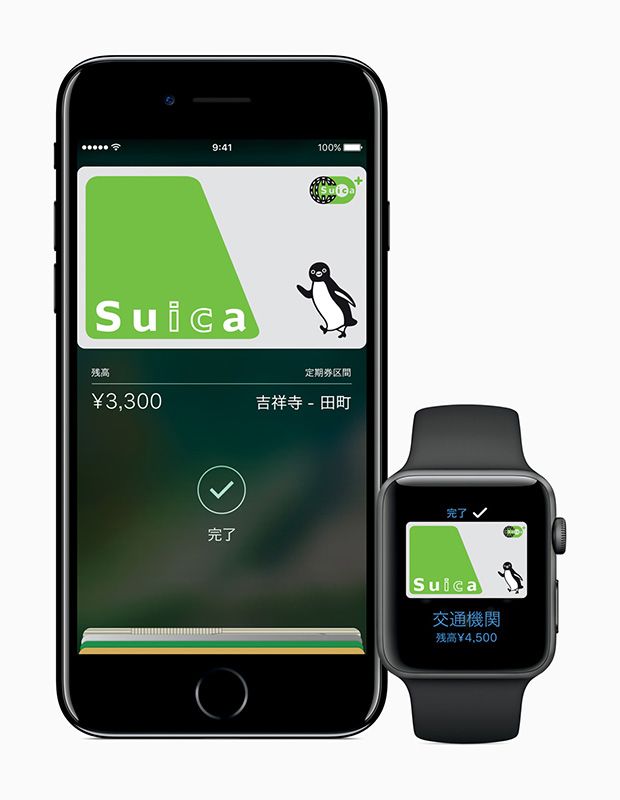 Along with the iPhone 7 and iPhone 7 Plus, the Apple Watch Series 2 is also FeliCa compatible. The Apple Watch can also be combined with earlier iPhone 5 and iPhone 6 models to access JR East’s Mobile Suica and other contactless payment services.

JR East had an added advantage in that FeliCa is able to process data faster and more accurately than Apple’s NFC system. During rush hour, passengers at Japan’s busiest stations speed through ticket gates at a rate of one per second. It is inconceivable that JR East would have risked slowing down the movement of commuters just to accommodate Apple.

Both Apple and JR East have an image of being uncompromising companies, but in the end it was Apple that swallowed its corporate pride out of a desire to enter Japan’s extensive contactless payment market and forged a partnership to bring FeliCa to the iPhone in Japan.

As a result iPhone 7 users will have the option of leaving their wallets at home, using their handsets to commute to work, make purchases at convenience stores, buy lunch or coffee, and even pay their taxi fare when drinking bouts last until the wee hours.

Many people in Japan, though, are still accustomed to making purchases in cash. In addition to winning over these consumers with its new FeliCa feature, Apple may be seeking to draw on the accumulated NFC knowhow in the Japanese market and to apply it to other regions around the world.

From Japan to the World?

Apple has built FeliCa chips into all iPhone 7 models, but only those sold in Japan have the necessary software to activate this technology. JR East’s Ogata said the company is continuing its negotiations with Apple, hoping that the Mobile Suica service will soon be made available to iPhone users globally, including those who will be visiting Japan for the 2020 Tokyo Olympic and Paralympic Games. This would help eliminate the long lines that now form at ticket counters for its Narita Express service and allow foreign passengers to travel quickly and smoothly from Narita Airport to destinations in central Tokyo.

FeliCa has made inroads into Hong Kong and a few other Asian markets but has yet to make a global debut. Hirai Kazuo, president of FeliCa developer Sony, remains hopeful of expanding the use of this standard, though, saying the company is focused on steadily building FeliCa’s potential.

It would not be the first time that the iPhone has helped to spread Japanese technology to the rest of the world. Take for example emoji. Started as a way to spice up email and texts, the illustrations have expanded globally after Softbank requested Apple make their new smartphones compatible.

Many in Japan are hopeful the iPhone 7 will do the same for FeliCa.

(Originally written in Japanese and published on September 23. Banner photo: An Apple press release shows the Mobile Suica service being used on the iPhone 7 at a station ticket gate.)