Society Culture Aug 17, 2017
Cats are royalty in Japan. Each month a slew of new feline-themed books, toys, and other goods hit store shelves, suggesting that the country’s obsession with the cuddly animals is here to stay. Social media has also become a lively gathering point for cat fans, including proud owners who post pictures and videos of their whiskered charges. Economist and hopeless cat lover Kita Yōsuke looks at how the mousers have taken over.

Why are so many people obsessed with cats? Perhaps it is the unabashedly footloose nature of felines that is irresistible. As one of human’s closest animal companions, cats have become the subjects of animation, literature, and other creative works. Take for example the laughable antics in the Tom and Jerry cartoons or the endearing protagonist in Paul Gallico’s Jennie (also titled The Abandoned). These are just two instances from the vast collection of feline-inspired creations spanning the globe.

Japan is no exception to making cats a part of its art, literature, and other genres. The lovable mousers have put their paw prints on everything from thousand-year-old classics to ukiyo-e to smartphone emoji. Their furry forms appear in historical works displayed in art museums, grace the pages of countless volumes stacked on library and bookstore shelves, and are ubiquitous on the Internet. Simply put, Japan is gaga for anything cat related. 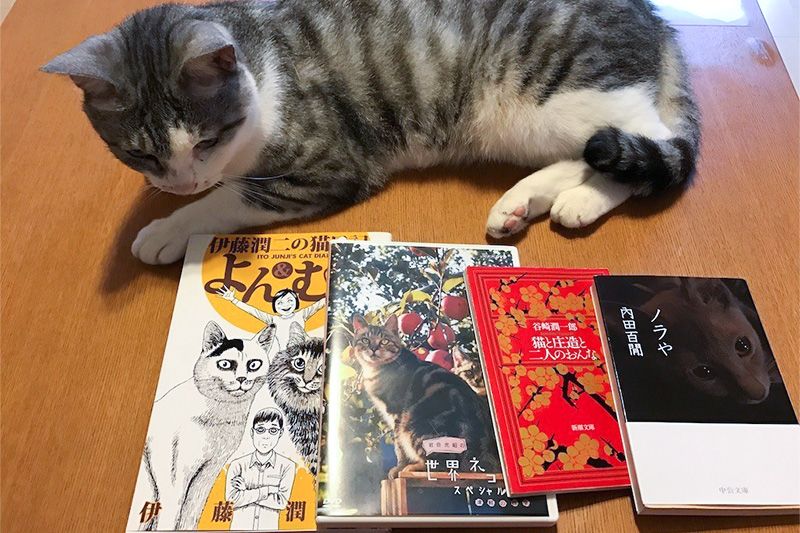 A selection of works inspired by cats.

This canon of works is largely the result of an insatiable appetite among cat lovers for all things feline. Such adoration has produced a “cat boom” in Japan that has been purring along for several years and shows no signs of slowing.

Can this cat boom be measured numerically? An online search of the National Diet Library database is not comprehensive, but is helpful in illustrating the extent of the boom. Starting in the late 1990s, there has been a steady uptick in published works containing the term cat in their titles. The increase has been especially marked since 2011.

By comparison, the number of books about dogs has been in decline since 2005 and were overtaken by their whiskered counterparts in 2008. The gap has been widening ever since. 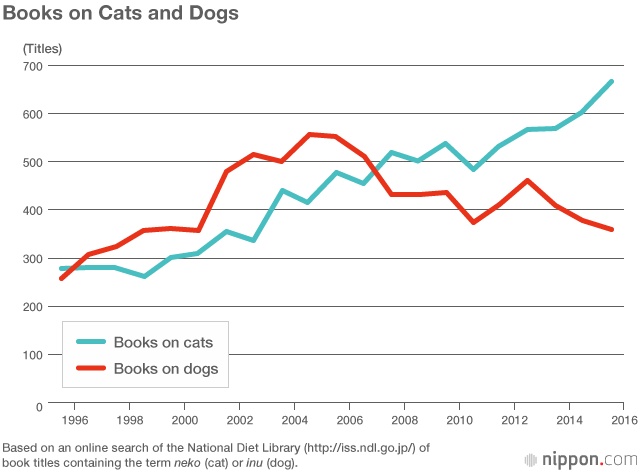 The feline dominance of the publishing industry extends beyond the animal kingdom. A search for works over the last decade reveals 5,400 titles for cats compared to 3,800 for Buddhism, the same number for sake, 3,400 for baseball, and 2,100 for soccer, indicating a stronger interest in cat topics than in drinking, religion, or sports. 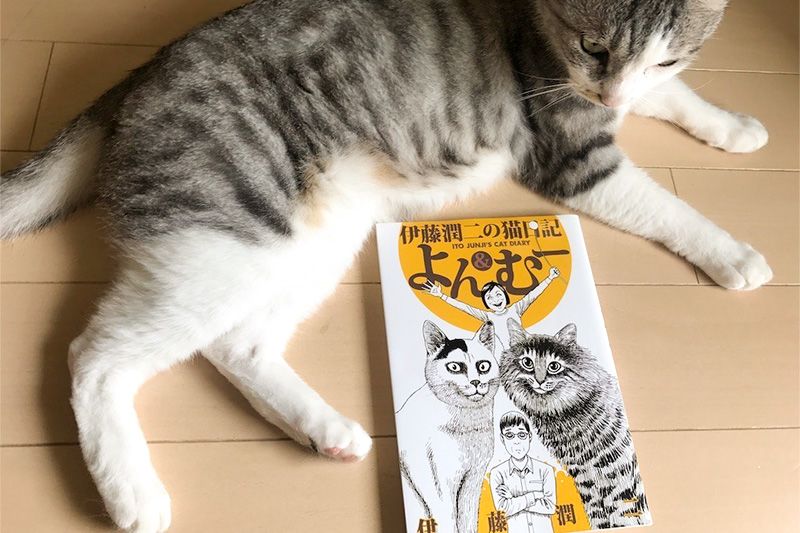 Manga are especially suited to exploring and expressing the idiosyncrasies of cats. Junji Itō’s Cat Diary: Yon & Mu is one such insightful work.

Driving the burgeoning interest in cats is Japan’s changing social landscape. As the birthrate has declined and the nuclear family has become the dominant social unit, cats have clawed their way to a more central position in households. Rather than merely being considered pets, they are increasingly given full rank and status as family members. (This is true in my home, where my cats behave as if they own the place.)

According to statistics compiled by the Ministry of Internal Affairs and Communications, the population of children under the age of 15 has steadily declined over the last 36 years, tumbling from 29.8 million in 1954 to 15.7 million as of April this year.

The cat population, on the other hand, has hovered around 10 million since 2011. Although there is no long-term data on cat ownership for comparison, it is reasonable to assume that the number of felines in households has been gradually approaching that of children for some time. Expressed in blunt social terms, Japan’s falling birthrate appears to have resulted in some people coming to consider cats as surrogate offspring.

Similarly, Japan’s changing social structure is leading people to spurn canine companionship, once a bedrock of pet ownership. As the graph below shows, the dog population has been in steady decline since 2011 and is in danger of falling below its feline counterpart. 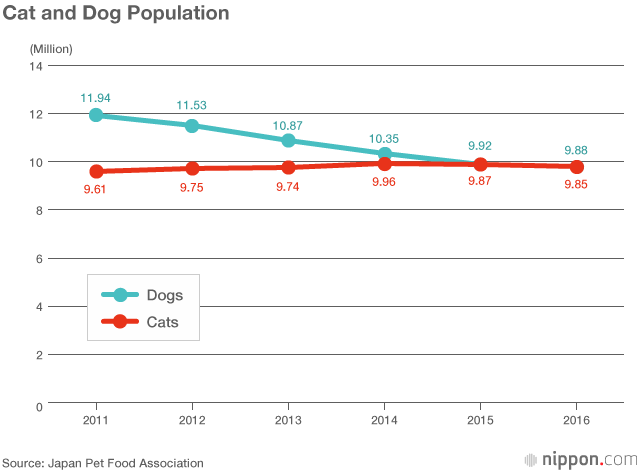 Again, social change in the form of Japan’s rapidly aging population and the influx of people to cities is largely to blame. Dogs need space to run and play, making them less suited to individuals living in cramped urban housing complexes. In addition, as people age, it can become a physical burden to take a pup out for regular walks. Cats, on the other hand, are independent and require very little care, desirable traits for busy city dwellers.

Taken as a whole, then, the fall of the dog population and decline in published works is proof of Japan’s waning interest in man’s best friend.

Compared to just a few years ago, cat lovers can enjoy and respond to a rapidly growing number of images and videos shared on platforms like Instagram and Twitter. Personal experience has taught me that having a steady flow of cute kittens in one’s social media feed is addictive and can produce a desire to adopt one. And even if inundation does not always lead to ownership, it has produced an army of incurable feline enthusiasts.

Recently, pet-dedicated social media platforms have also started to take off. One such example is Dokonoko, a straightforward Japanese app that allows cat and dog lovers to create and share photo albums of their pets and browse and comment on other people’s posts. (There are also several feline-specific sites for purists.) 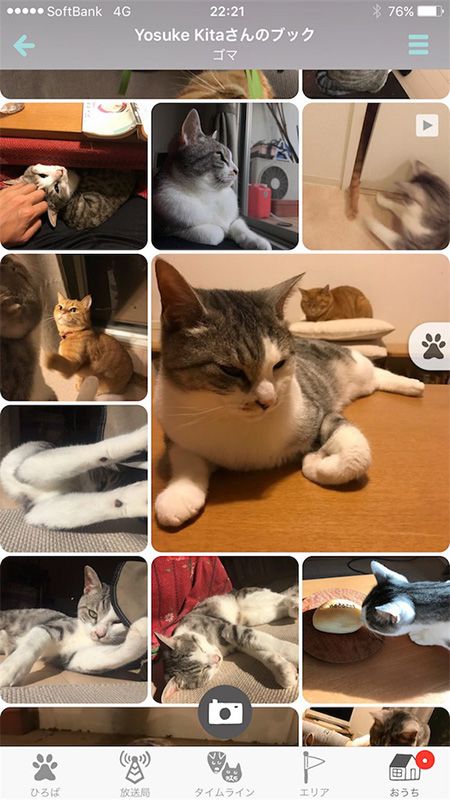 The author regularly posts images of his two cats on Dokonoko.

Dogs aside, apps like Dokonoko add a new dynamic to Japan’s cat craze by creating a steady stream of high-quality, user-generated content. This feline takeover of social media has bolstered the cat-loving community by giving fans a ready source of cuteness and by bringing new people into the ranks.

Japan’s obsession with cats keeps gaining steam and appears set to last far into the future. As an eternal cat person, I am eager to see where it leads next.

(Originally published in Japanese on August 8, 2017. Banner photo: Manekineko dolls on display at the Museum of Kyoto on April 28, 2017, as part of a special cat-themed exhibit. © Jiji.)