Society Mar 9, 2018
Fisheries along the southern Sanriku coast in Japan’s Tōhoku region were devastated by tsunami in 2011. Seven years since the disaster, many have rebuilt port and other basic facilities and have used recovery efforts to improve and streamline operations. Catches have largely rebounded, but communities continue to struggle to attract young people to local fishing industries. Journalist Kikuchi Masanori returns to the towns of Ishinomaki, Minamisanriku, and Onagawa in Miyagi Prefecture for an update on the progress of the area’s fisheries.

Traveling in mid-February up the Sanriku coast in Miyagi Prefecture, I pass by scores of heavy machines as I navigate the winding highway that skirts this intricate stretch of shoreline. The diggers and other construction equipment are part of a government project to build a mammoth seawall that will shield coastal communities from tsunamis like the one that devastated the region in March 2011. My first stop takes me to Minamisanriku, a town I have not visited in a year, to check on local disaster recovery efforts.

At the newly completed factory and headquarters of the seafood company Marusen in Minamisanriku Miura Hiroaki, the third-generation head of the 80-year-old company, reflects on his struggles over the last seven years. “It has been a long, tough road,” he says, a smile spreading across his features, “but we’re finally over the hump.”

The plant sits on a raised platform of soil built in an area that before the tsunami was the town center. Finished in September 2017, the factory is still running at limited capacity until a grand opening, an event that will include the launching of a new shop onsite, scheduled for mid-March. Miura says he is relieved to have the fishing industry finally back on its feet. “Our business depends entirely on the region’s marine resources,” he explains. “Now we finally have a steady flow of the basic ingredients we need.”

On the production floor female employees clad in pink hooded coveralls dip fillets of locally sourced salmon in batter. The fish will eventually be fried and served as part of school lunches at local schools. “We provided dishes to schools before the earthquake,” states Miura. “Now that the factory is finished we can start doing it again.” 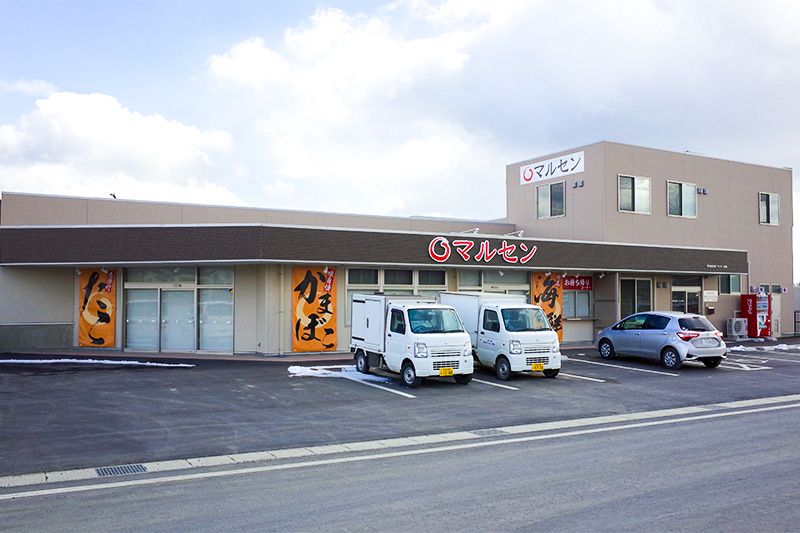 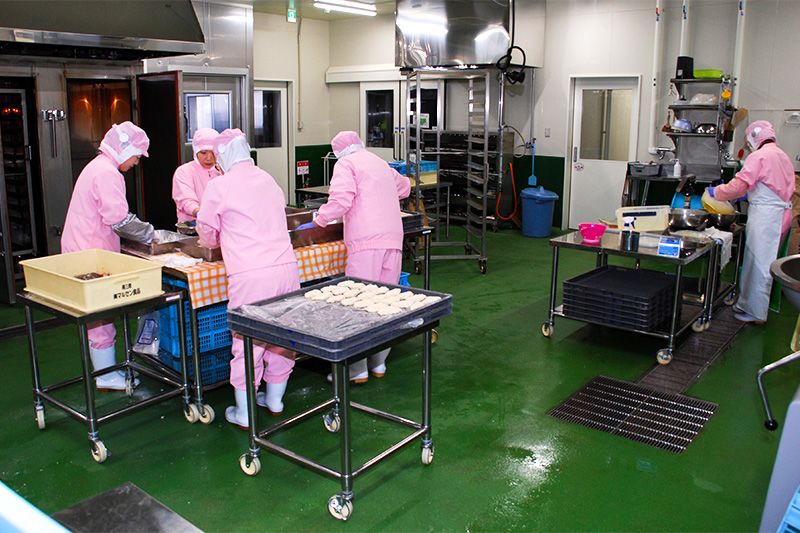 Once fully operational, the factory will produce a wide variety of seafood products.

Miura lost nine properties including his house, shops, and a factory when the tsunami swept through Minamisanriku, devastating the town center. The massive wave also claimed the life of his grandmother, whom he lived with. In December 2011, while still living in temporary housing, he set out to rebuild Marusen, borrowing a workspace and using an old car he obtained to deliver seafood products to residents who still had to rely on donated food. In early 2017 he moved out of his provisional accommodations after work on his new home was finished. The completion of Marusen’s new ¥360 million production facility now gives him a permanent place to run his business as well.

Although Marusen’s situation has improved greatly, Miura knows he must keep thing in perspective. Standing outside the company’s gray-walled plant, he shares his thoughts on the future. “I have a new home and have rebuilt my company, but I can’t ignore the disaster’s impact on the town’s population and business environment. I have to put my shoulder to the wheel and turn local marine resources into great products.”

Catches Recover in Iwate and Miyagi

The convergence off the Sanriku coast of the warm Kuroshio Current and cold Oyashio Current produce one of the richest fishing grounds in the world. However, the tsunami decimated ports, fishing fleets, and aquaculture facilities that supported the fishing and seafood processing industries, long the backbones of the region’s economy. Fisheries in Iwate and Miyagi Prefectures are recovering as reconstruction of key infrastructure has neared completion. In Fukushima Prefecture, though, the fishing industry is still struggling under restrictions stemming from radiation concerns.

In Minamisanriku, most of the town’s port and aquaculture facilities were restored by 2014. The local fishing industry, which lost 90% of its fleet, has with the assistance of fishing cooperatives around the country and through other means gradually replaced vessels, enabling more fishermen to return to the water. Catches have gradually improved after falling to 3,042 tons in 2011 in the wake of the disaster. Boats netted a whopping 8,556 tons of fish in 2013, a year of extraordinary catches. Despite falling since then, catches have shown growth in more recent years, with 2017 marking what looks like a sustainable return to predisaster levels with fishermen hauling in 5,928 tons valued at over ¥2.21 billion, an increase of 14% and 23%, respectively, from the previous year.

With fish catches rebounding and construction complete, the head of the town’s agriculture, forestry, and fisheries department says the industry must now change its focus to securing and educating the next generation of fishermen.

The population of Minamisanriku has fallen by around a third since the disaster, and as residents age and the birthrate remains low the downward trend is unlikely to change. This is bad news for the town’s fishing cooperative, which needs more young people to take up the trade if it hopes to grow and sustain itself into the future. To attract newcomers, it has joined hands with the tourism association as well as prefectural and national governments on various projects, including a program that provides people looking to resettle in rural areas a chance to experience local fishing and aquaculture.

Gotō Kiyohiro, an oyster and wakame seaweed farmer in the town’s Togura district, has been active in boosting the appeal of aquaculture. Gotō came close to folding his operation when the tidal wave carried off his home and the rafts he used for cultivation. Three months after the disaster, though, he took over as regional representative of the prefectural fishery cooperative. With funds from the central government he began work to reform cultivation techniques by reducing the excessive number of oyster platforms. 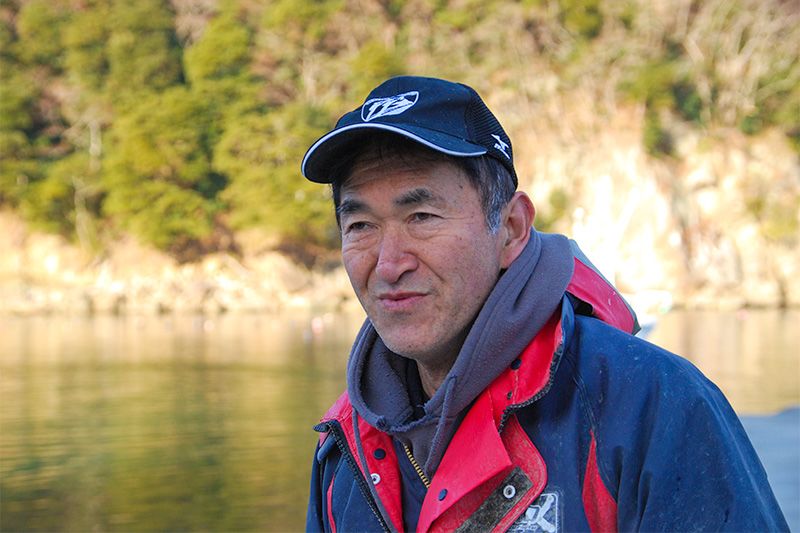 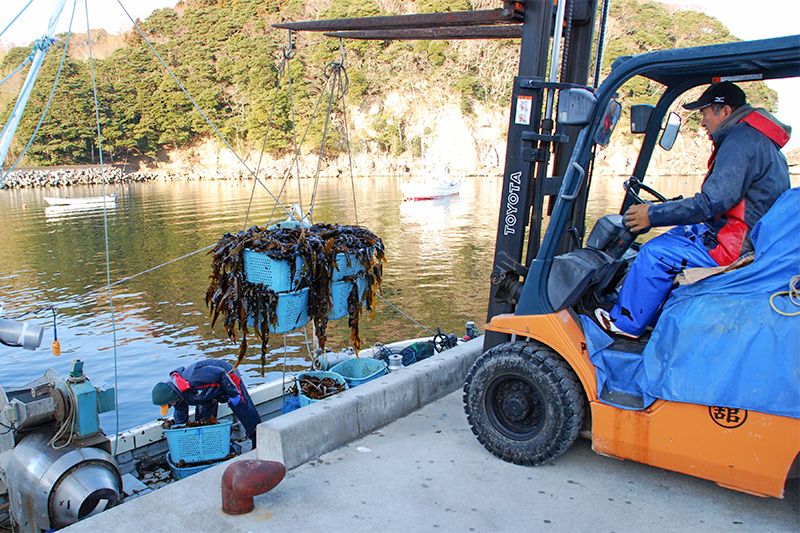 Gotō says overcrowding stemmed from farmers looking to maximize production. “Before the disaster there were concerns that it was affecting the quality of our oysters,” he explains. “I felt reducing the number of platforms would improve growing conditions by keeping waste from building up and ensuring even distribution of nutrients.” Gotō notes with a sense of irony how the tsunami also served as an agent of change. “Having to start over from scratch made it easier to introduce the necessary reforms.”

The plan disrupted long-established fishing rights and many in the industry opposed the proposal at first out of fear they would see their incomes fall. Gotō focused on the benefits of his plan, though, eventually winning the support of around 40 oyster farmers. In the end he succeeded in reducing the number of platforms by nearly a third from their predisaster level.

Although farmers grow smaller batches of oysters, output has remained steady as the mollusks can now be harvested in one year instead of the previous two to three. Improving production has also lowered costs and decreased labor hours by around a fifth, helping lift profits by 15%–20%.

Two years ago, the Holland-based Aquaculture Stewardship Council recognized the efforts of the Togura fishery and awarded it certification, giving an added boost to the local oyster-growing industry.

Gotō says he can see a ripple effect in the community as younger residents who might have moved away for work or to attend school are choosing to remain in Minamisanriku. “In the past parents encouraged their children to move to the city, but there is renewed confidence in the industry. Now that young people have a chance to manage their own farms, they are starting to see a future for themselves in growing oysters.”

Attracting the Next Generation

South of Minamisanriku in the towns of Onagawa and Ishinomaki, areas once inundated with rubble, work on port facilities and raised platforms of soil for new structures is nearing conclusion. 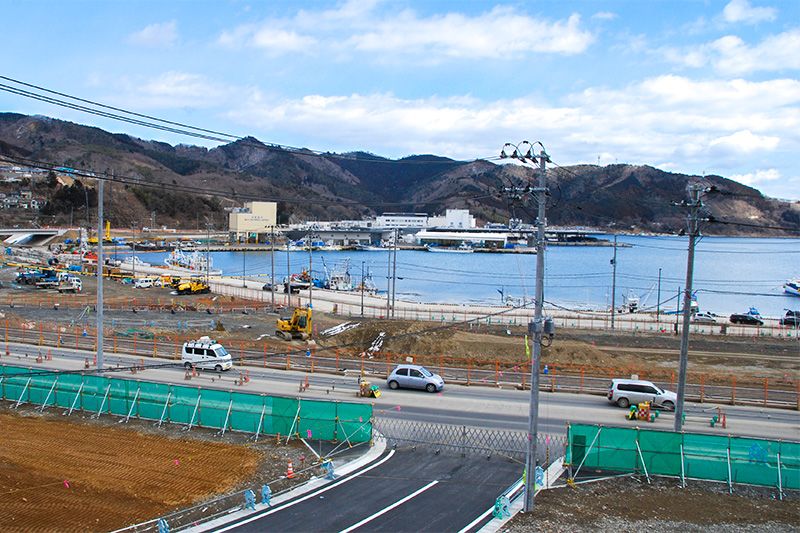 Traffic flows past a construction site along a coastal road in Onagawa.

In Onagawa, recovery efforts are making steady progress. In the last few years the town has completed several key projects, including construction of an ice and refrigeration facility, and in April 2017 it opened a new regional wholesale fish market.

The local fishery is also bouncing back. In 2016 the fishing industry was finally able to secure the necessary vessels to complete its fleet. Fish catches have been slowly edging upward over the last few years, recovering to around 80% of what they were before the tsunami. In 2017 boats netted over 35,600 tons of fish, nearly twice the 19,740 tons caught in 2011. According to the local industry recovery bureau, in the wake of the disaster local fishermen took the initiative and carried out cleanup work and emergency repairs at port facilities. This has facilitated recovery by allowing large reconstruction projects to wrap up ahead of schedule.

Even as port and processing facilities come back online, though, the town, which bore some of the worst destruction in the region, continues to suffer one of the nation’s highest depopulation rates. The town’s population plunged by nearly 40% from the 2010 national census to the 2015 census. With fewer people to carry on the fishing trade, Onagawa, like Minamisanriku, is working to recruit newcomers to the industry to counter the effects of a dwindling and graying population.

Leading the charge has been a group of young fishermen from Onagawa, Ishinomaki, and other communities along the Sanriku coast who in 2014 formed the cooperative Fisherman Japan. Based in Ishinomaki, a town that lost more than 3,000 residents in the tsunami, the group aims to attract young people to the industry by rebranding fishing as an attractive, high-paying, and innovative profession. The 40 core members of the organization are involved in a wide range of activities, including direct sales of their products, planning and managing events, and professional training.

Abe Shōta, the group’s 32-year-old head, stresses that revitalizing the industry hinges on bringing up the next generation. “It takes ten to fifteen years to become a full-fledged fisherman,” he explains. “Most veterans are in their sixties and seventies, so it’s vital to tap into their experience now to train newcomers while also transforming how the industry runs.” 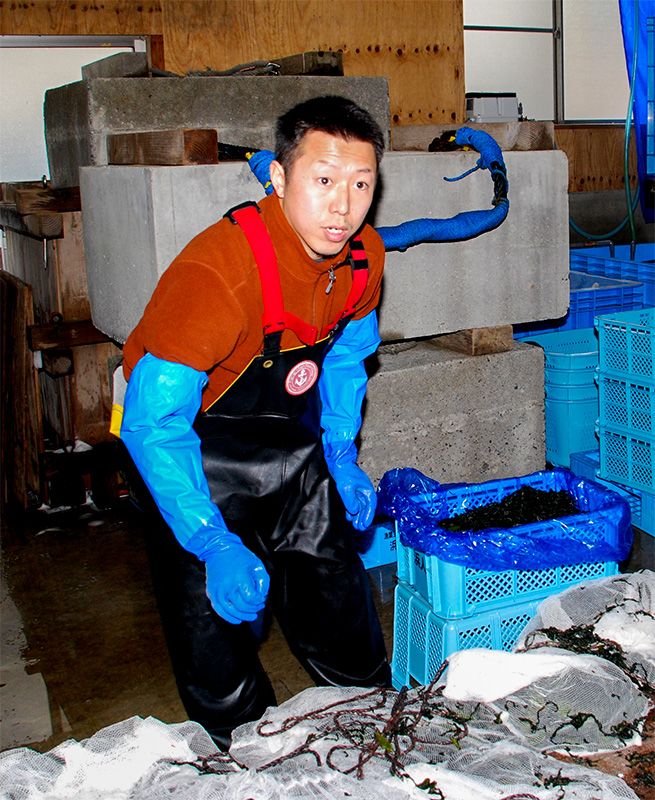 Shortly after Fisherman Japan was formed, Ishinomaki enlisted it in establishing a hands-on fishing and aquaculture training program and a work experience scheme. In 2015 the group also set up an employment site for people looking to join the fishing industry. To date, around 100 people have participated in programs or applied for positions, with upward of 40, including 20 newcomers to the industry, finding employment.

While interest in fishing as a career is growing, Abe says the group must continue working to boost the appeal of the profession. “The next challenge is to keep people in the industry,” he exclaims. “We are always exploring ways to better market products and make fishing a more lucrative vocation.”

Many residents in communities along the Sanriku coast remain in temporary accommodations, and constructing housing complexes along with restoring basic infrastructure like roads, medical and welfare facilities, and governmental services continue to be priorities. However, the fishing industry also has a vital role to play in recovery. It is the resilient people working in the commercial fisheries who will be a driving force to rebuild communities.