Politics Society Jun 29, 2015
Onagawa has recovered relatively quickly from the 2011 tsunami, despite being one of the hardest-hit communities. Journalist Kikuchi Masanori returns to the town to interview Mayor Suda Yoshiaki for the second time and see what has changed in the two years since they last talked. 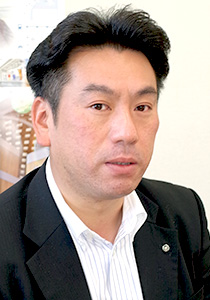 Born in Onagawa in 1972. After graduating from the School of Business Administration at Meiji University, he worked for an advertising agency before serving for three terms in the Miyagi Prefectural Assembly from 1999. In November 2011, he was elected mayor of Onagawa. 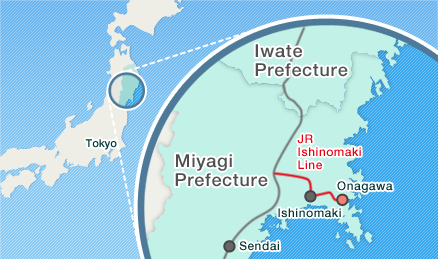 KIKUCHI MASANORI  Onagawa Station reopened in the town center this March, four years after the 2011 earthquake and tsunami. The port, which is particularly important for local industry, has made a remarkable recovery, and new seafood processing plants have been completed nearby. Would you say the path to revival is coming into focus?

MAYOR SUDA YOSHIAKI  No, that’s still to come. It’s true that the completion of the new station building is a big step, and it’s also encouraging that the core industries of fishing and seafood processing have rallied. Last fiscal year, ending in March 2015, total fishing sales for the town amounted to 5.5 billion yen, topping the figure of just under 5 billion yen for the year preceding the disaster. And total sales at Onagawa Fish Market are also higher than before the tsunami. These are both due to high fish prices. On the other hand, the volume of the catch is only 80 percent of what it was before. And the membership of the local fisheries cooperative has dropped by more than 20 percent with the loss of those who died in the disaster and of others who have closed down their businesses. So the situation continues to be tough.

For seafood processing, the most important thing is to ensure there is a big enough catch, so it’s essential to get the port completely up and running again as soon as possible. Wharf-related construction will largely be completed by the end of this fiscal year. And over the coming two years we’ll be working to raise the elevation of land and prepare it for construction so as to meet the demand for processing plant sites for local firms that are rebuilding and for firms from outside the town that want to put up new plants.

SUDA  The multipurpose seafood processing facility Maskar was completed three years ago using capital provided by a Qatari foundation set up to support revitalization of communities affected by the 2011 disaster, and it’s being used for storage of goods by the seafood industry for the whole town. Having multiple firms share storage space increases the efficiency of the facility. The individual firms continue to compete with each other, but they’ve taken up on the idea of sharing some functions. This is a departure from their traditional way of doing business. In the sense that the town’s firms are competing as a team, I think this is a landmark innovation.

The town government has also adopted the system of private finance initiatives with the construction of a joint wastewater treatment facility that was just completed this April. We’re also considering ways of reducing power costs for the local seafood processing industry as a whole, such as by setting up a system under which it would purchase electricity collectively from power companies and distribute it to individual firms, using smart technology to manage each firm’s power usage.

Onagawa Station (left), which reopened four years after the previous station building was washed away in the tsunami, and the multifunctional seafood processing facility Maskar (right), built with the support of the Qatar Friendship Fund.

KIKUCHI  When I spoke to you two years ago, you said that the top priority was the construction of public housing for disaster victims. People started to move in to new units in 2014, as originally scheduled, but how has it been going with the construction of additional units?

SUDA  The first tenants moved in last spring, but the site development that needs to be completed before construction is taking longer than planned in some areas, causing delays of three to six months. Basically, we’re using heavy machinery to clear and level higher ground within the town for residential construction and using the earth from this process to raise the elevation of land within the town center and other areas near the coast. But we’ve encountered unexpected solid bedrock in many places, which is making the work difficult and time-consuming.

The town intends to build 1,000 units of public housing and so far 250 have been completed. This fiscal year, we plan to finish more than 300 additional units. We will build apartment complexes at a total 34 locations within the town. This includes one place where we quickly demolished the municipal athletic stadium and put up 200 units.

The complex task of acquiring land and property rights has also caused delays. Because of the huge number of owners involved, it’s a seemingly endless job, even with all the town workers going out. And we remain short of staff, so difficulties are inevitable. On the town’s islands and peninsulas, meanwhile, the terrain is steep, limiting the routes for transporting earth and sand, and this slows down the overall reconstruction process.

Blasting Through the Hard Ground

KIKUCHI  Land subsided by over one meter in coastal areas due to the earthquake. I heard that for some time after the disaster, many areas of the port remained flooded with seawater.

SUDA  A lot of the land that subsided remains at its lowered elevation. The town center is near the ocean, and while we are implementing anti-flooding measures, at the same time we have to move forward with construction, but the lowered elevation affects our work. When there’s heavy rainfall, such as from a typhoon, traffic throughout the town is paralyzed. Water washes in from the sea, and it blocks drainage of the water from inside the town.

In any case, we must avoid any further construction delays. We hope to reduce development time by reconsidering the methods being used and trying to devise new ones. In mid-May, we introduced blasting as a new way of breaking through the hard ground. We’re said to be the first town in the tsunami-affected area to adopt this method.

As construction material prices remain steep, we’re still seeing some cases where there are no successful bids for construction activities, but these are somewhat less common than before. We prepare budgets taking into account the ongoing high prices, and I believe we’re now doing well by comparison with other disaster-affected areas in terms of inviting successful bids. 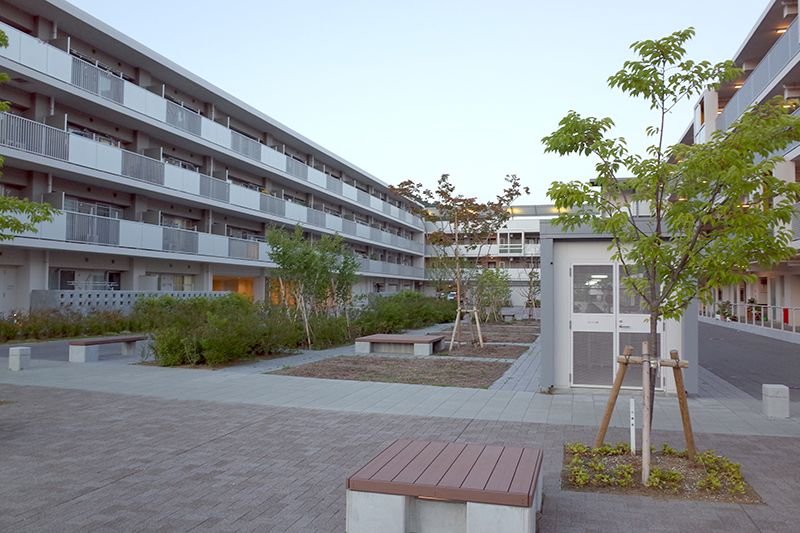 Public housing built on high ground after the athletic stadium was demolished and the land cleared.

KIKUCHI  There is still no prospect of the Onagawa Nuclear Power Station restarting. With the town struggling financially, would you like to get it running again as soon as possible for its tax revenues and other substantial benefits?

SUDA  The town’s initial budget for the 2015 fiscal year was 34 billion yen, which is nearly six times greater than for before the disaster. Funds are mostly allocated to land development, including rezoning, reshaping, and mass relocation for disaster prevention. Having fixed asset taxes and other revenue from the nuclear power station is certainly beneficial, but the town became eligible for local allocation tax grants two years ago, and this is serving as a revenue source. We’re also drawing more than 10 billion yen in fiscal adjustment funds, which is the same level as before the disaster. Fixed asset taxes from the nuclear plant are now 2 billion yen; this figure is falling at a pace of 0.1 to 0.2 billion yen a year due to depreciation.

Restarting the plant will definitely be possible once everything is in place. The Nuclear Regulation Authority will have to rigorously conduct the most important check for disaster resistance. Clearing strict standards is a major prerequisite. Personally, I think that nuclear power is essential for the moment, not just for Onagawa but for the whole country’s energy supply. It will take ten or twenty years to develop and expand usage of alternative energy sources.

Speaking of financial matters, the national government is currently talking about making local authorities shoulder some of the costs of reconstruction, which it has covered entirely until now. But the town is already carrying many costs, and I think the idea that shouldering this additional burden will somehow make us more self-reliant is peculiar. It isn’t that I don’t understand the national government’s point of view, but municipalities with strong financial resources like Sendai [the prefectural capital], for example, have already completed their recovery and are no longer bearing this sort of burden, so I find it accept the idea of shifting costs to municipalities facing difficult conditions and requiring more time for recovery.

KIKUCHI  The town’s population has dropped by 30 percent since before the disaster. Does this affect community development?

SUDA  Population decline is a national trend, and Onagawa’s population would have decreased even without the tsunami. So what should we do? Our development efforts are now based on concentrating services to maintain vitality, which results in a compact community. Construction of a commercial area centering on Onagawa Station is underway, and a number of stores are now being built. From June, work began on a shopping district to be operated and administered by the private community development firm Onagawa Mirai Sōzō.

When the shopping district is completed with twenty-seven stores in December, the town will look very different. Ultimately there will be around fifty stores in the vicinity of the station. We are also planning to build the government office and other public facilities in the area. But it won’t be anything fancy like what you would see in a city. Both the station and the central shopping district will mainly serve to make the town more compact. 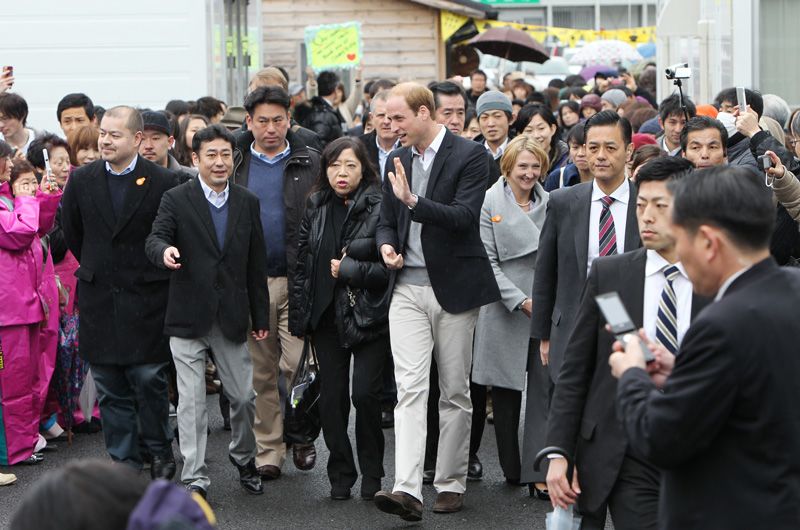 On March 1, 2015, Prince William of the United Kingdom visited a temporary shopping center in Onagawa, and Mayor Suda explained the town’s state of recovery to him. © Jiji

(Translated from an interview conducted in Japanese on June 1, 2015. All photographs provided by the author, unless otherwise stated.)

A Tōhoku Town Returns to Life
An overview of recovery efforts in Onagawa, four years after the tsunami. A companion piece to the above interview.

The State of Sanriku Today (Part 1)
Photographer Wada Naoki visits Rikuzentakata, Tarō, and Ōtsuchi between 2011 and 2014 to chronicle their recovery from 3/11.

The State of Sanriku Today (Part 2)
Wada Naoki visits Kesennuma, Minamisanriku, and Onagawa between 2011 and 2014 to chronicle their recovery from 3/11.

A Late Spring in Tōhoku (Part 1)
Two years on, Kikuchi Masanori revisits the communities he reported on in the spring and summer of 2011, encountering a mixture of optimism and bitterness as the region slowly rebuilds.

A Late Spring in Tōhoku (Part 2)
Kikuchi Masanori travels to the Tōhoku region to report on the state of the recovery effort. A continuation from the above article.

A Land Awash in Despair
Kikuchi Masanori's first visit to Tōhoku, four months after it was devastated by the March 11 earthquake and tsunami.

3/11 and the Aftermath (Photos)
March 11, 2011, was a day that stunned Japan and the entire world. These images, taken between March and May 2011, show the immediate aftermath.