Society Disaster Nov 1, 2011
March 11, 2011, was a day that stunned Japan and the entire world. These images of the aftermath provide an important reminder of how much rebuilding work remains to be done.

At 2:46 p.m. on March 11, 2011, the Great East Japan Earthquake Disaster struck, unleashing an enormous tsunami that devastated huge stretches of the Pacific coast, from the Tōhoku region in the north to the Kantō region near Tokyo.

The horrible moment when the tsunami swept over the coast . . . the gradual realization of the full extent of the destruction . . . a crushing sense of despair . . . followed by the rising determination of people in the disaster areas to rebuild their lives, and even some smiles amid the hardship . . .

Some two months after the disaster, several photographers documented the damage. Their photographs, presented in this slideshow, give us a chance to look back on this unprecedented disaster.

The year 2011 is now drawing to an end. The disaster that struck Tōhoku in March was on a scale believed to occur once a millennium. In many places, the huge piles of debris and rubble shown in the photos still remain.

Whole towns have been flattened by the tsunami. There are still no clear blueprints on how to restore these communities. To spur these vital rebuilding efforts, it is vital that people outside the disaster areas do not forget the scenes of devastation from that terrible day. 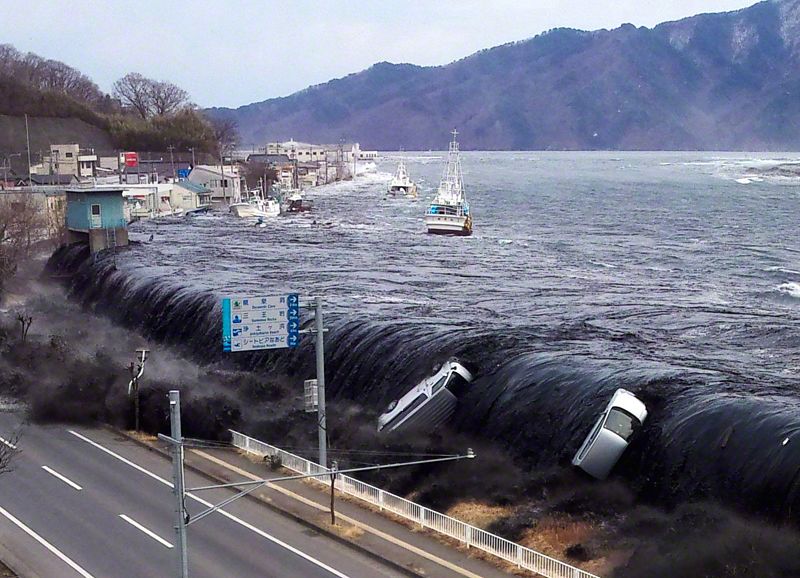 The tsunami crashes onto the shores of the city of Miyako. The cars swept up in the wave provide chilling testimony to the devastating power of the tsunami. (Image provided by a Miyako City employee.) 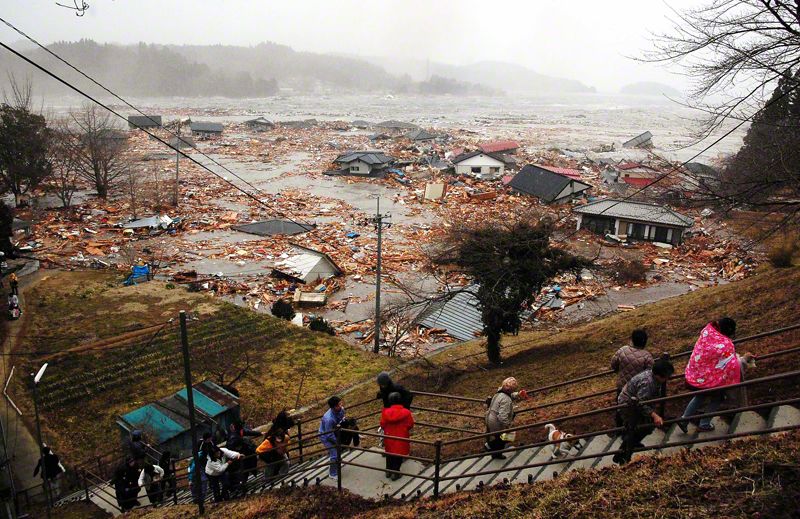 People look back in horror as they flee to higher ground, their homes transformed forever in the space of a few terrible moments. 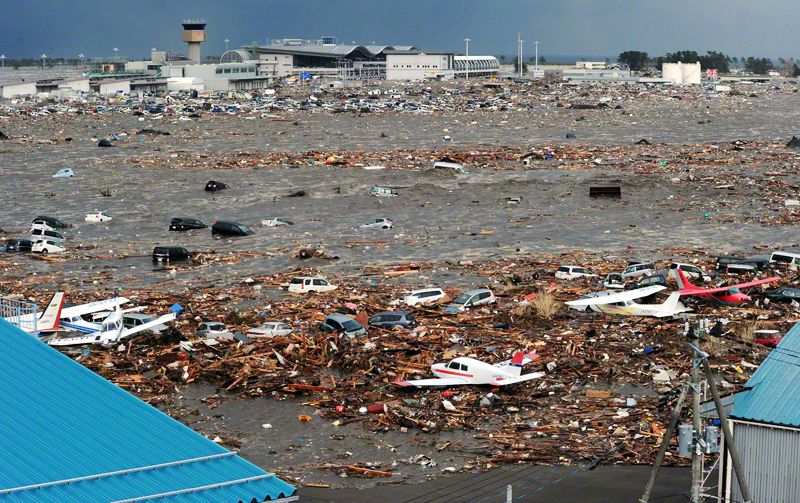 The tsunami swamps the runway at Sendai Airport. Cars and the shattered shells of houses litter the area. Light aircraft washed up by the tsunami float on a sea of refuse. In the background is the passenger terminal. The airport reopened for domestic flights on April 13. 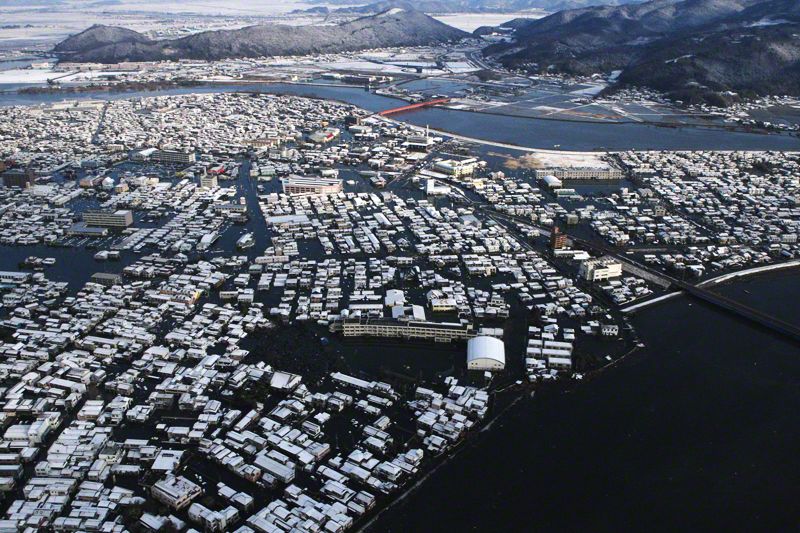 The tsunami left huge stretches of the city underwater. 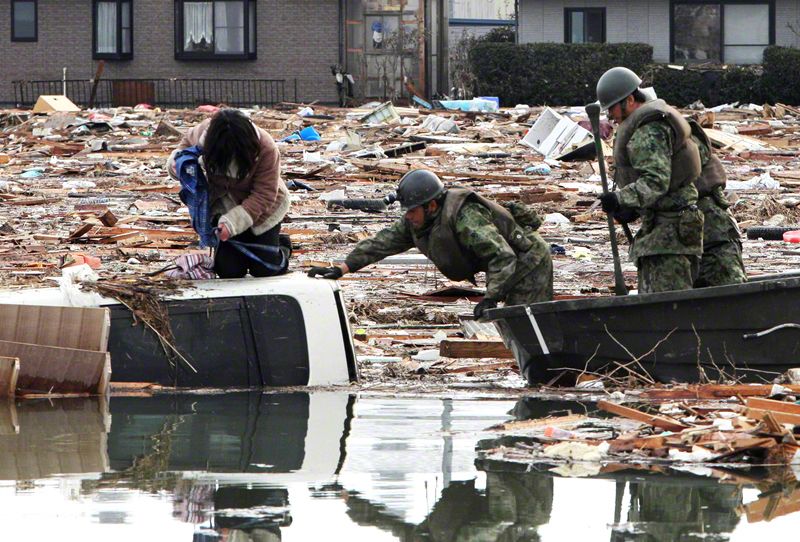 Self-Defense Force personnel use a boat to rescue a woman stranded on top of a car. 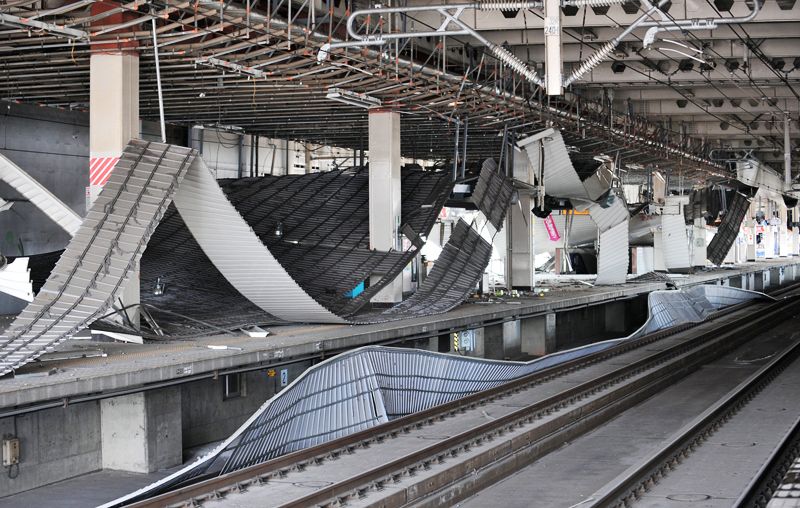 Buckled ceiling boards fell down onto the Shinkansen bullet train platform. Other damage included collapsed walls and water leaks. Shinkansen trains started running between Tokyo and Sendai on April 25; and complete service was restored to the Tōhoku Shinkansen line on April 29. 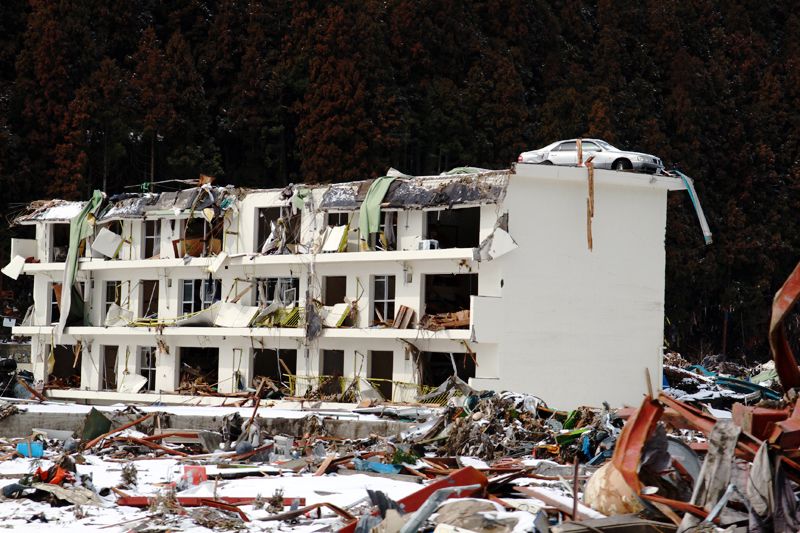 The outer shell is all that remains of this devastated building, roughly one kilometer from the shoreline. 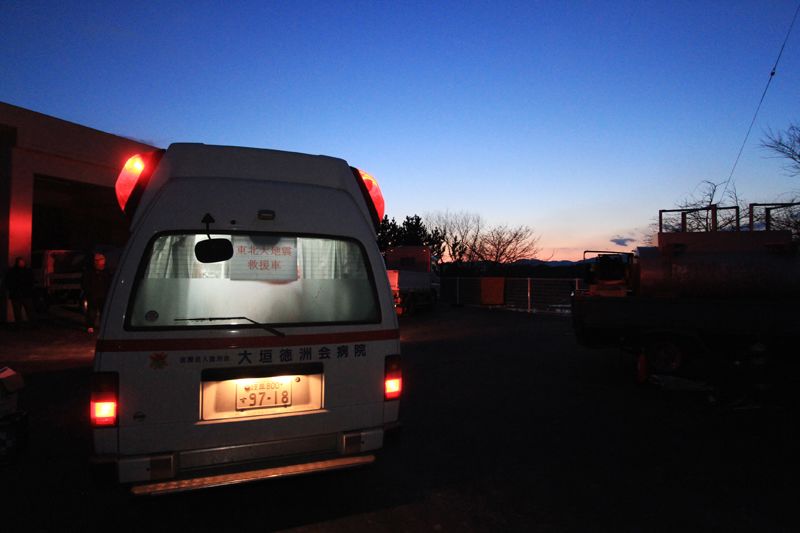 There is no heating inside the evacuation center, so doctors carry out their medical consultations inside the emergency vehicles of the Tokushūkai Medical Aid Team (TMAT). 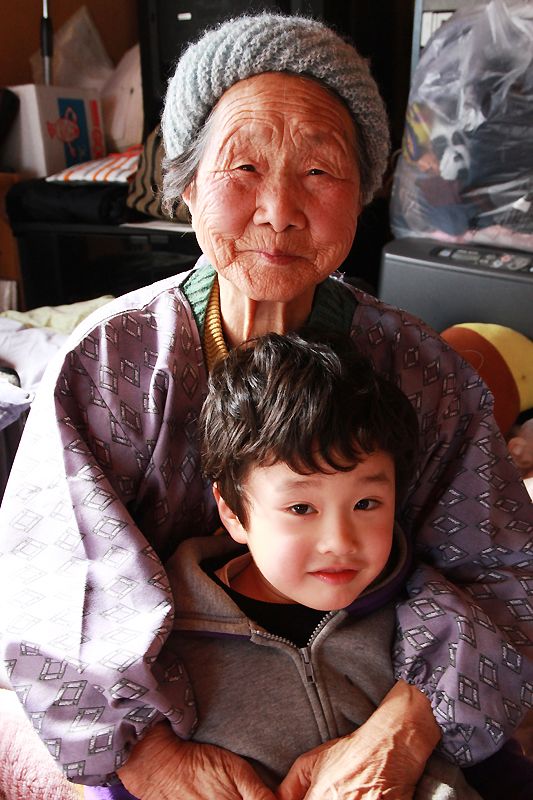 An elderly lady with her great-grandson. The whereabouts of the boy’s father are still unknown. 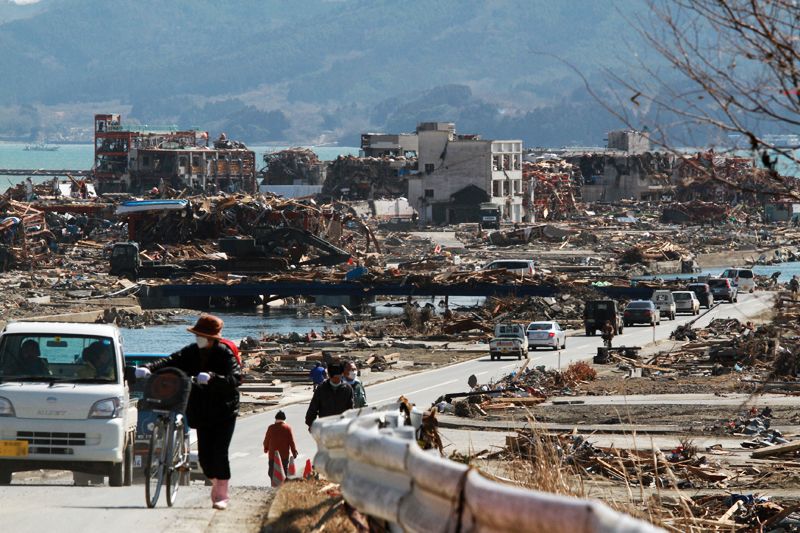 Reconstruction work by the Self-Defense Forces succeeded in opening part of the national highway shortly after the disaster. 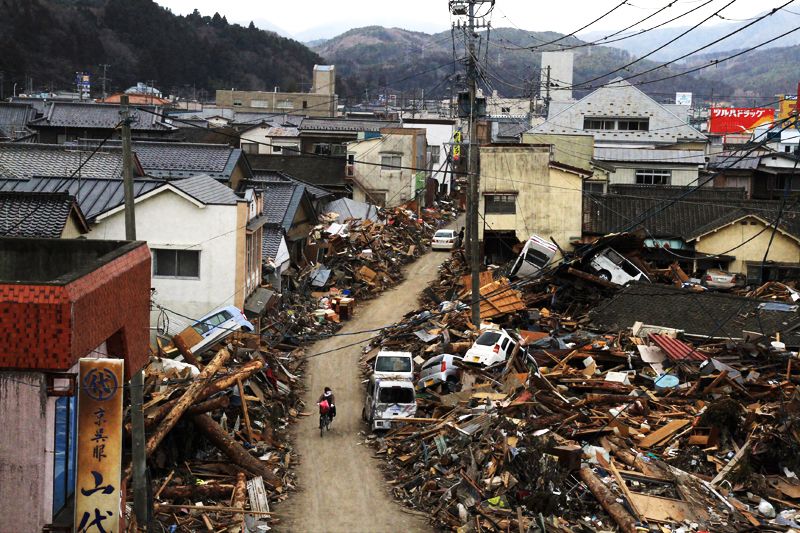 Clearing the road is the first priority. Rubble and wreckage blocks the entrance to many houses. A mother and daughter stand on the railway tracks of the JR East Japan Kesennuma line, where no trains have run since the disaster. 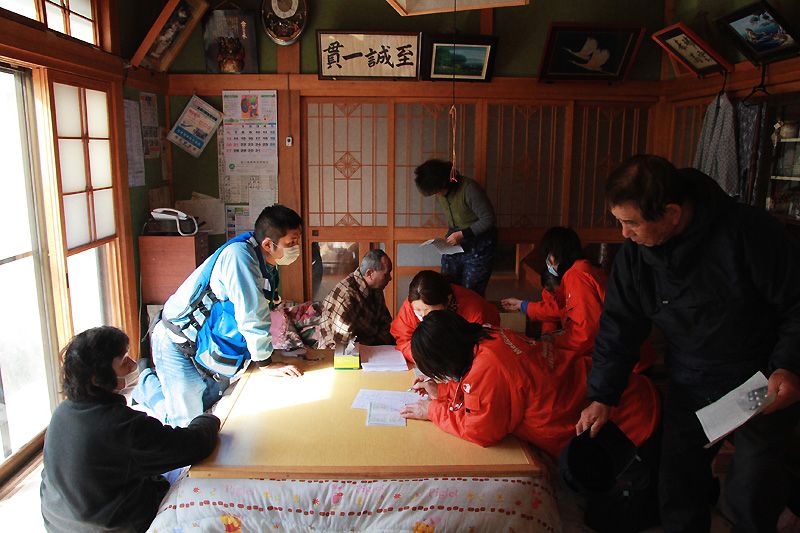 Patients visit this private residence with a variety of complaints, including high blood pressure, diabetes, and insomnia. 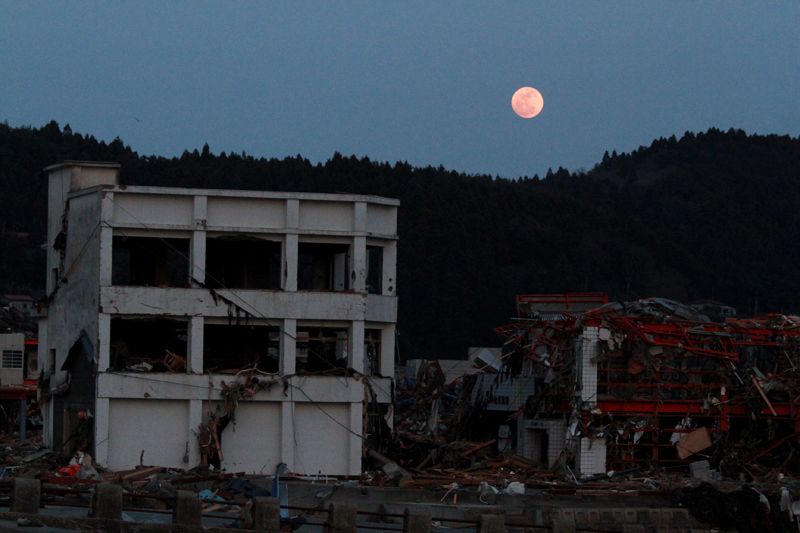 Full moon over the Shizugawa River. 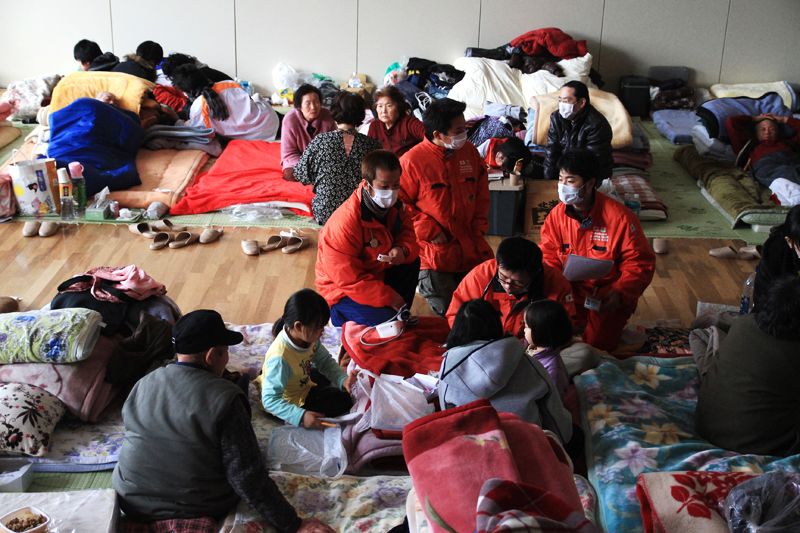 TMAT members doing their rounds of the evacuation center, where many of the evacuees are children and elderly people in need of medical attention. 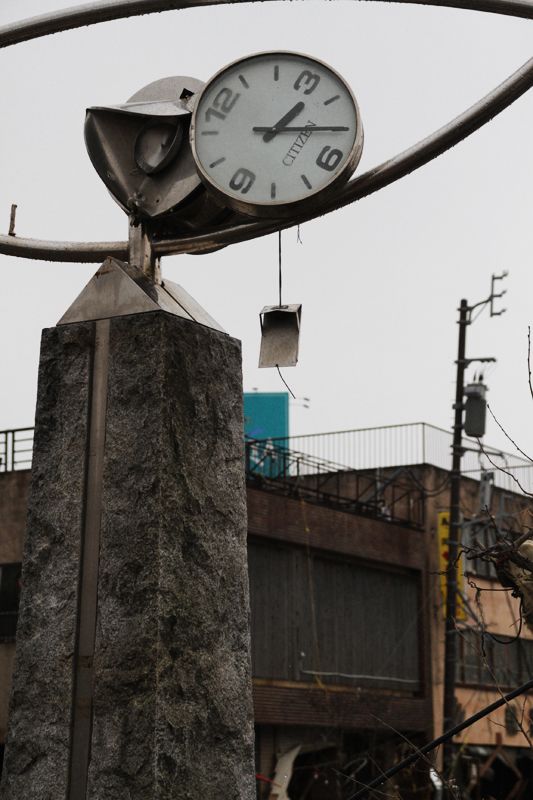 This clock has become a tragic reminder of the moment when disaster struck. 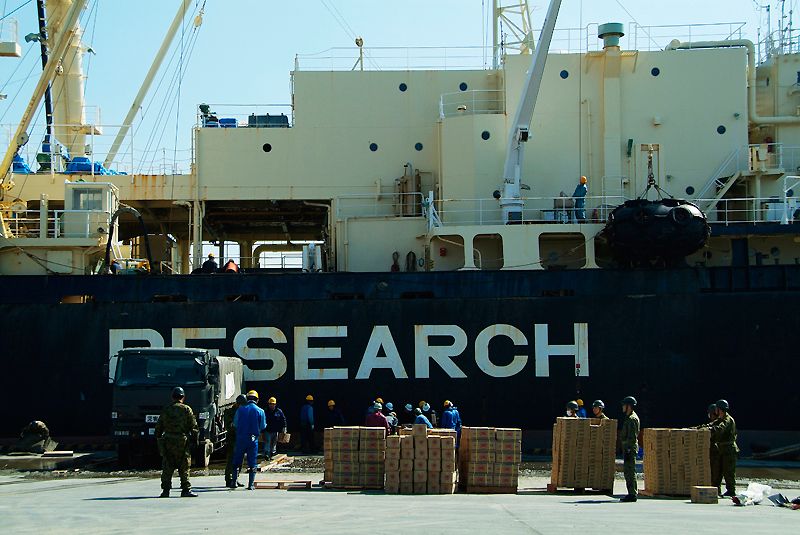 Large quantities of relief supplies are unloaded from a ship docked at the city’s harbor. 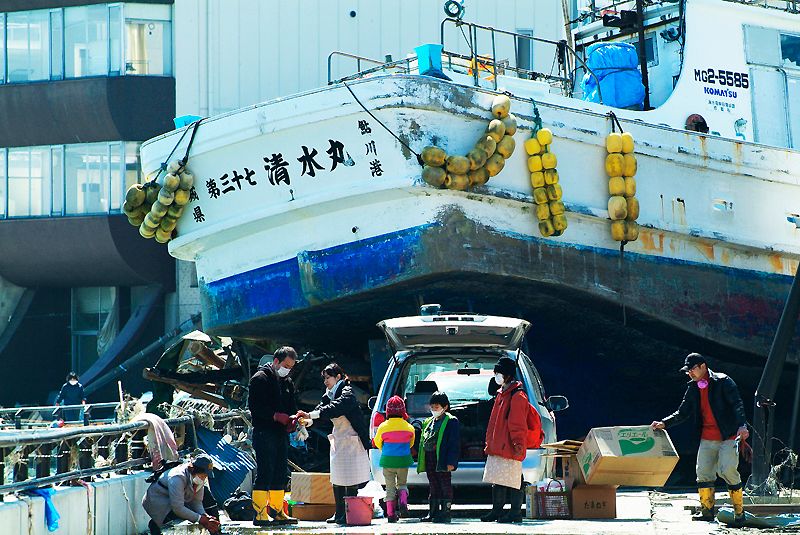 A large fishing boat dumped onto a road by the powerful tsunami. 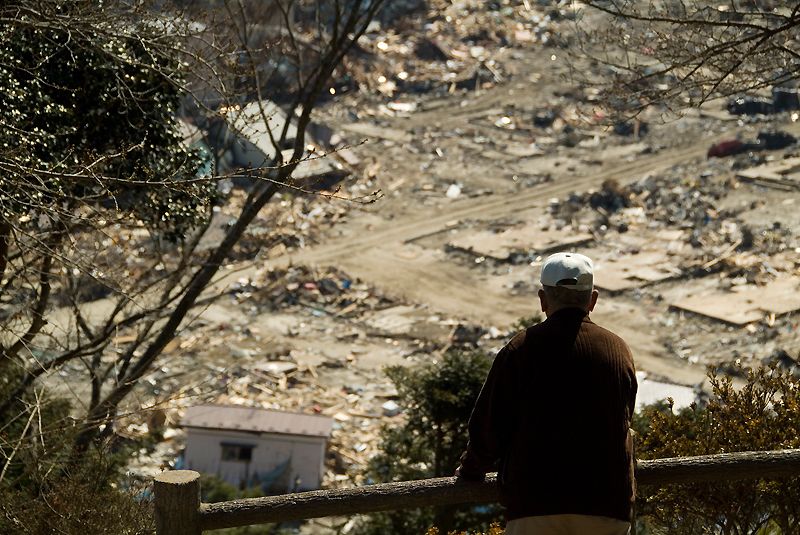 A man solemnly looks down at the utterly transformed area around Hiyori-yama Park. At a soup-kitchen set up by a professional wrestling group, volunteer barbers were on hand to provide haircuts. 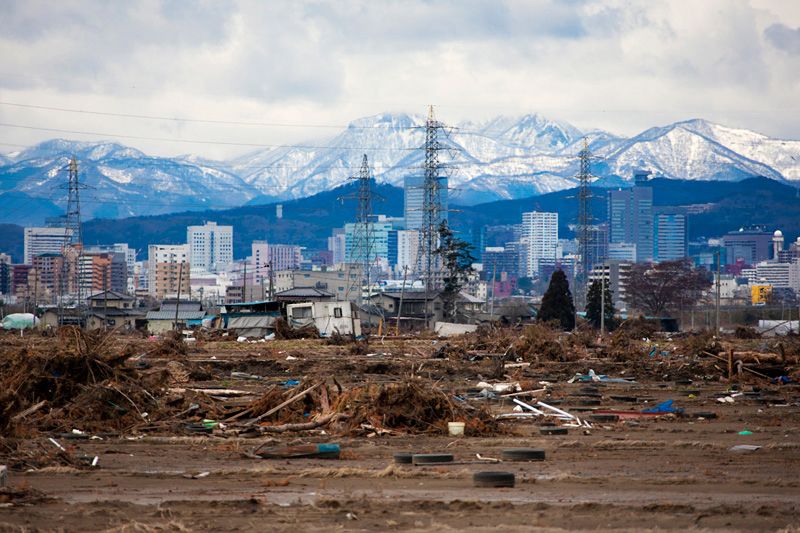 Debris from the tsunami was carried several kilometers inland from the sea. In the background, the city of Sendai and nearby mountains. 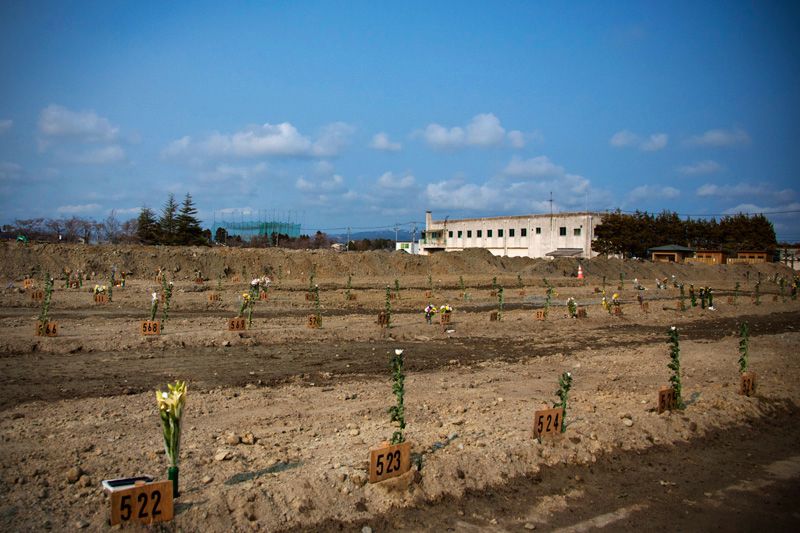 A burial area set up on the banks of the Jyō River on the west side of town. 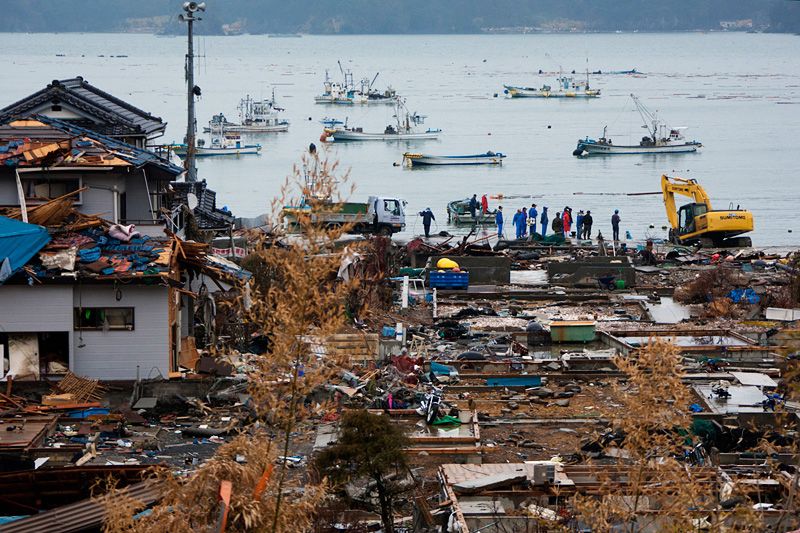 The first steps on the road to recovery—small boats and an excavator provide a boost to limited human strength. 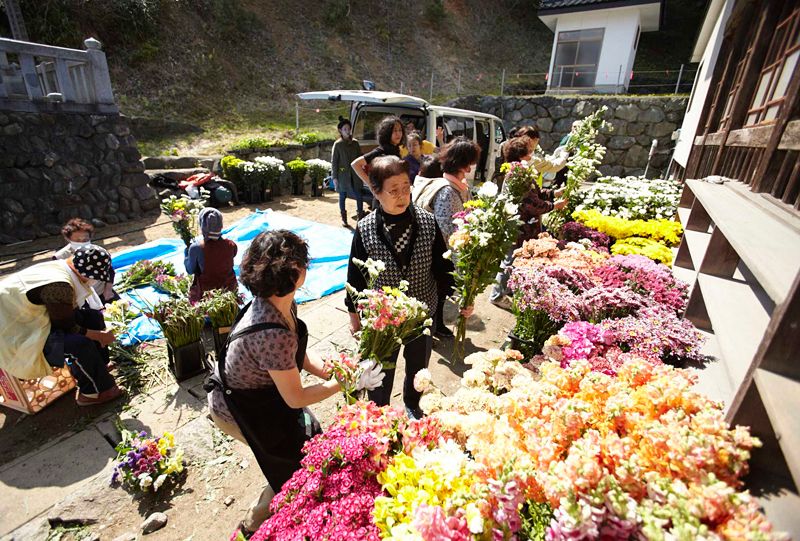 Flowers donated for a mass funeral ceremony held 49 days after the March 11 disaster. Volunteers brought huge numbers of flowers that they had collected in Tokyo. 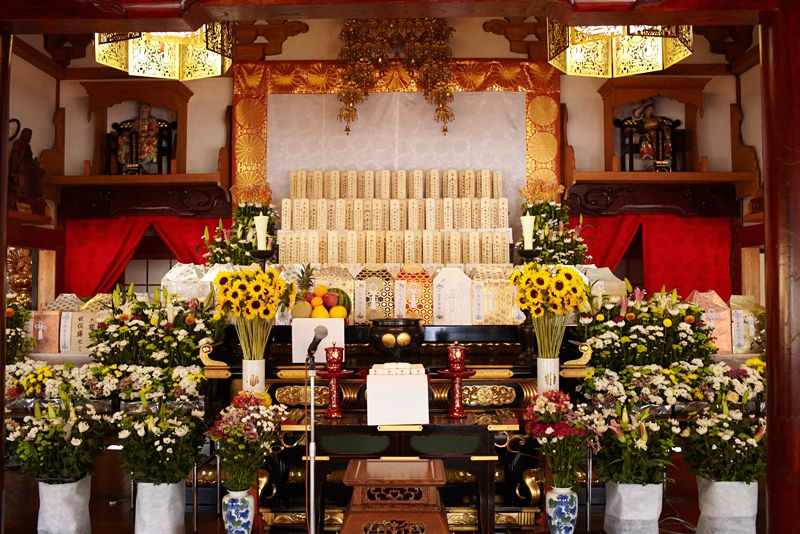 The work on decorating the altar is complete. The 160 mortuary tablets lined up alongside one another serve as a grim reminder of the scale of the tragedy. 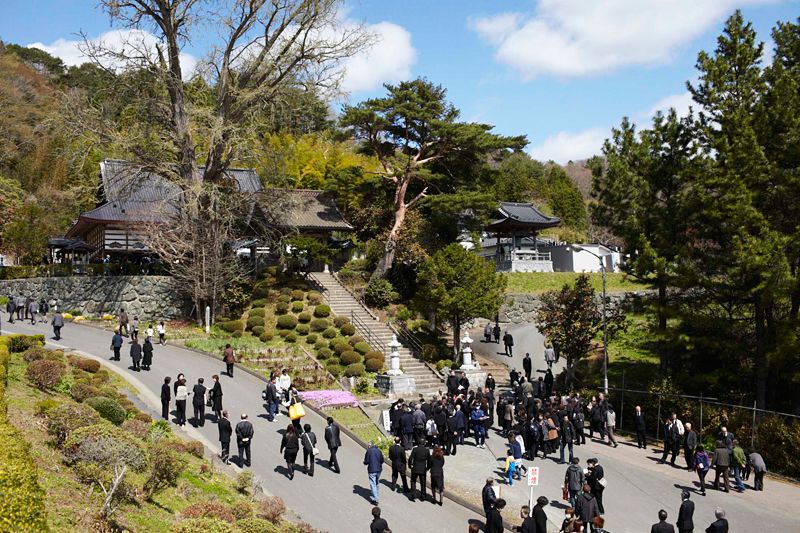 The people of Kirikiri make their way to the temple. The ceremony was blessed with clear blue skies, in contrast to the rainy skies of the previous day. Because of the large number of relatives who wish to attend, entry to the main prayer hall is limited to just two people per family. 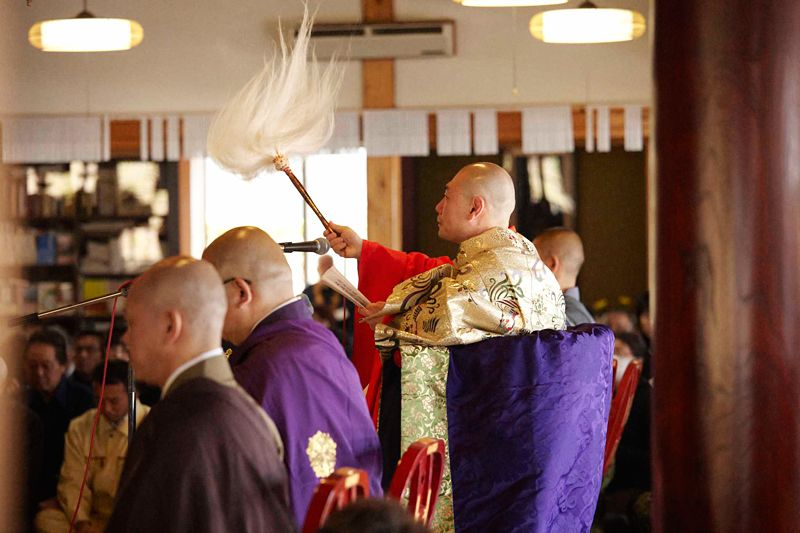 The priest weeps as he chants the sutras, overcome by grief as he recites the posthumous Buddhist names of more than 160 people in one ceremony. 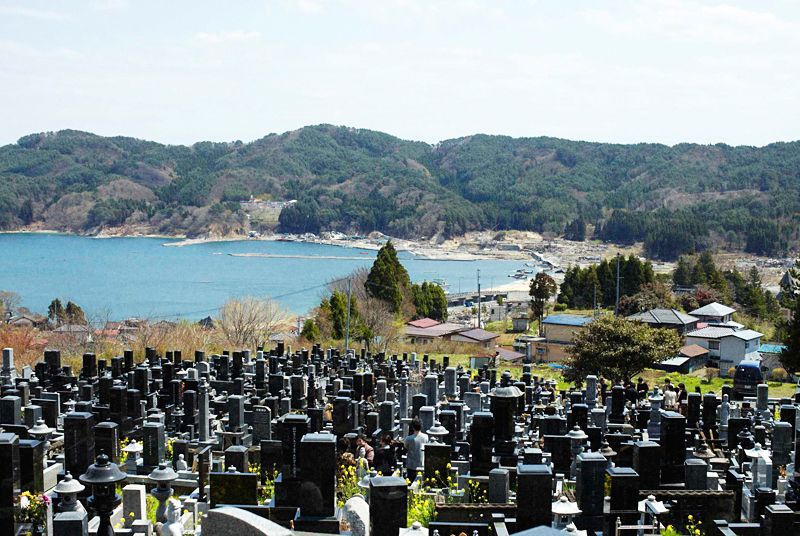 After the ceremony, relatives head to the graveyard, where those who perished in the disaster have this beautiful view to console their spirits. 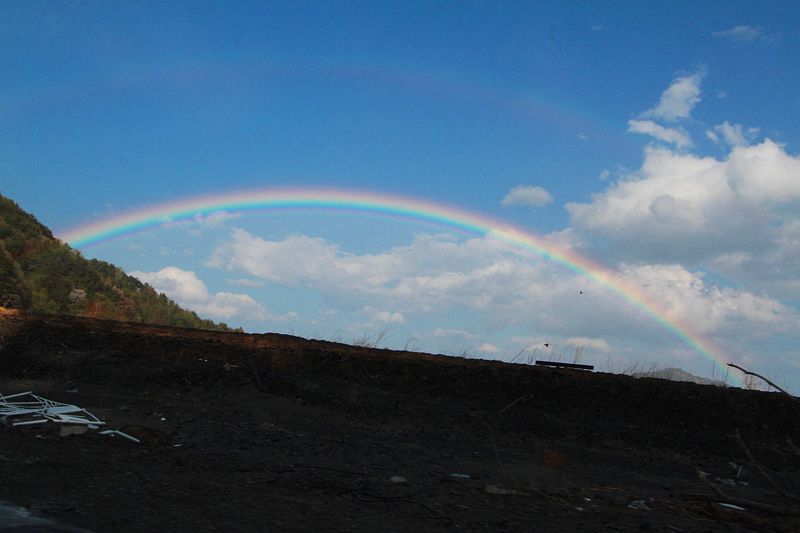 A crowd of local residents gathered to look up at this huge rainbow, which stretched right across the sky above the devastated town where everything was swept away.

Further slide shows featuring photos taken after the March 11 disaster can be accessed at JapanEcho.net:

Kahoku Shimpō: A Local Newspaper’s View of the Disaster
Tokushū Shimbun: Medical Assistance in the Disaster Zone
Kawai Satoshi: After the Tsunami: Pictures of a Ravaged Coastline | Smiles Amid the Wreckage | Spring Blooms in the Disaster Areas
Shoe Press: One Step at a Time: Coastal Areas Begin to Rebuild
Kuyama Shiromasa: Scars of Devastation
Matsuda Tadao: “Walking” to Recovery: A Community in Mourning Turns to Face the Future