Leading the World in Longevity: Japanese Firms in Business for a Century or More

Economy Science Technology Sep 20, 2013
Japan is home to many businesses that are at least a century old, and many that are much older. Most are family firms that have been nurtured, developed, preserved, and passed on within a single clan. Funabashi Haruo, president of the Sirius Institute think tank, examines this phenomenon and the factors underlying it.

A surprising number of businesses in Japan have been in existence for 100 years or longer. Such longevity may hold useful lessons for new businesses and for the development of new forms of industrial society. What are some of the ways in which these longstanding enterprises have managed to endure?

Approximately 20,000 of the 1.24 million business entities in Japan were established at least a century ago. Of these, about 1,200 have been in existence for at least 200 years, and some 400 for at least 300 years. Around 30 Japanese firms have endured for 500 years or more, and 7 have been in existence for a millennium or more. No small number of these age-old operations are family businesses that have been nurtured, preserved, expanded, and passed on from one generation to the next.

Many of these long-lasting concerns are involved in one of three areas of business. The first is that of goods considered necessary for daily life, primarily food and medicine. This area includes sake, traditional confectionaries, soy sauce, miso, and herbal medicines. It stands to reason that essential commodities would have more staying power than luxury goods.

The second area is family operations, which are typically devoted to innkeeping or to a trade requiring special skills, such as papermaking, metalworking, and metal casting. Businesses like these are relatively easy for a single family to maintain and are considered readily adaptable to changing times.

The third area is businesses that support traditional cultural pursuits. This includes the manufacture of materials and implements used in the tea ceremony, flower arranging, nō performances, and the like. Some of these firms have supplied such items to Japan’s imperial family and bygone feudal lords, as well as to Buddhist temples and Shintō shrines. The 10 family firms collectively known as the Senke Jusshoku, longtime producers of exquisitely crafted tea ceremony utensils and materials, are probably the best-known practitioners of this type of business.

Clarity of Purpose and Long-term Perspective Are a Must

Why is the country home to so many long-enduring enterprises? Some relevant factors may be Japan’s geographical circumstances, ideas, and even religious beliefs that have developed over the course of its history, not to mention distinctively Japanese approaches to business. Not every firm survives, though. Only a limited number overcome the challenges and carry on for the long haul. What accounts for their longevity?

Hiroki is one of the best-known sake brands in Japan, and most connoisseurs of the rice-based drink praise its famous unfiltered, unpasteurized, and undiluted sake for its refreshing taste and delicate aroma. Difficult to preserve and ship, Hiroki is a famously elusive sake, available only in a limited number of specialist shops around the country. Hiroki Shuzō (Brewery) has been making sake since the middle of the Edo period (1603–1868) in Aizubange, a town in the western part of the Aizu region of Fukushima Prefecture.

The first attribute is a clear sense of purpose and a vision for the business. The proprietors of firms that survive, and their successors, define and put into practice explicit principles defining their business objectives, essential strengths, and foremost concerns. In some cases these guiding principles are written down and preserved in the form of a family creed or code of behavior; they may also be passed on by word of mouth from one generation to the next, sometimes as a confidential inheritance, like a secret family recipe. Sometimes the family code is expressed through ceremonial actions reflecting the firm’s founding philosophy or inspired by the words and deeds of the founder. The one constant among Japan’s most enduring businesses, exemplified by virtually every one, is dedication to a particular set of values and bedrock principles.

The second attribute is a management approach based on a long-term perspective. An enduring business has a great deal of accumulated history to draw upon. A 200-year-old firm looks ahead to the next 200 years, and a 500-year-old firm tries to see 500 years into the future. Basic management policy is far more concerned with the firm’s long-term welfare than with short-term profit or the pursuit of wealth.

The foremost priority is to protect that on which long-term prosperity depends—the firm’s good name. In Japanese the word noren refers to a type of short curtain usually hung outside a traditional shop or restaurant. Originally a simple sunshade or splashguard, over time the noren became a convenient device for displaying the shop’s insignia. By extension, it came to symbolize a business’s reputation. A stain on the noren, and the implicit damage to the firm’s credibility, is to be avoided at all costs. 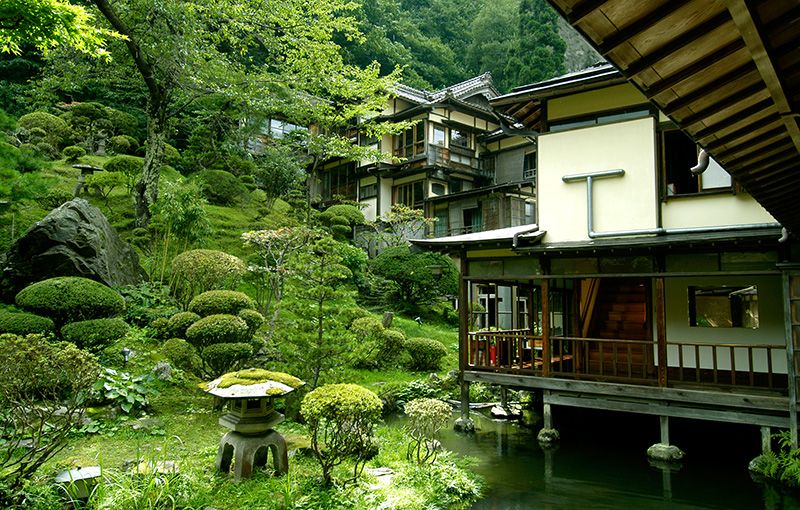 Mukaitaki is a traditional inn near central Aizuwakamatsu, nestled among a small group of traditional hot-spring hotels. During the Edo Period, the building was a retreat belonging to the feudal lords of the Aizu domain. It opened as an inn in 1873. Over the years, Mukaitaki has welcomed a number of influential figures, including Japan’s first prime minister, Itō Hirobumi, and other leading statesmen of the Meiji era (1868–1912), the prominent bacteriologist Noguchi Hideyo (whose image adorns the ¥1,000 banknote), the poet Yosano Akiko, and more recently Prime Minister Koizumi Jun’ichirō. The elegant building, a vestige of the Meiji era, is on the government’s registry of important tangible cultural heritage sites.

The third attribute of enduring businesses is a management style that puts people first. Most of Japan’s oldest firms regard their employees not as replaceable parts but as the heart of the business and agents of growth. They are strongly committed to in-house training and take a long-term view when recruiting personnel and evaluating job candidates. In some cases, the family creed explicitly spells out the principle that family business operators and their employees are to be united in pursuit of prosperity.

Operators of enduring businesses have customarily focused on the importance of having the right personnel. Many of these firms have formulated corporate governance frameworks to ensure that only those with sufficient talent and drive can enter the ranks of top management, by carefully screening potential heirs, practicing “kingcraft,” and eliminating unqualified aspirants at family meetings. Some have erected systems similar to those seen in modern corporations that apportion executive responsibilities among members of the top ranks, ensuring that the privileges of ownership are strictly separated from operational authority.

The fourth attribute is thorough devotion to putting the customer’s interests first. A business enterprise, whether large or small, must have customers—not to endure over the long term, but to exist in the first place. Long-established businesses must vigilantly avoid shortsighted profit-taking or complacence in their longevity, which may lead them to neglect their customers.

The fifth attribute of a long-lasting business is a healthy relationship with the larger community. This is not merely a matter of avoiding criticism or the wrong kind of publicity. It arises from a basic desire to actively contribute to public welfare through business activities.

The sixth attribute is a willingness to evolve and constantly innovate—the ability to avoid being imprisoned by past success. One key to longevity is knowing what to change and what not to tinker with in response to shifts in society and customer needs. At times, this means summoning the courage to change one’s own approach.

The seventh attribute is advocacy of simplicity and frugality. In Japan, waste has always been regarded as a transgression that merits serious rebuke. There are frequent, pointed reminders to practice modesty and frugality, both in managing a business and in conducting one’s own life. But frugality is not the same as stinginess. The former is a means of conserving resources for future investment, whereas the latter is simply saving money as an end in itself. More importantly, the practices of modesty and frugality foster a climate of honesty and integrity, which is an invaluable asset to the business. 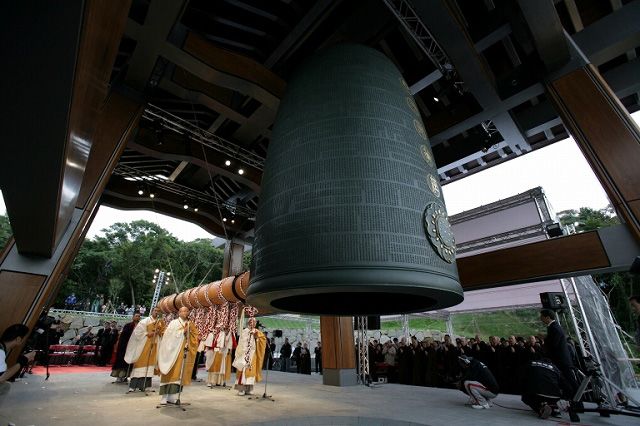 Oigo Works manufactures 70% of the bells used at Buddhist temples in Japan. Established 200 years ago in the city of Takaoka in Tōyama Prefecture, this bell-maker receives orders from abroad as well.

The eighth and final attribute of enduring businesses is an unflagging determination to preserve and pass on the values and approaches described above. Companies observe procedures and ceremonies to recall the founders and their families, as well as the firm’s philosophy and values; to commemorate and contemplate the bonds uniting employees who struggled through hard times together; and to pass along these memories to new generations.

In summary, an enduring business must have a clear sense of purpose, be able to adapt to changes in society and the environment for competition, stay focused on the interests of those who rely on its activities, conduct itself as a responsible member of the community, continually strive to improve its own capabilities over the long term, and conduct itself in a frugal manner. 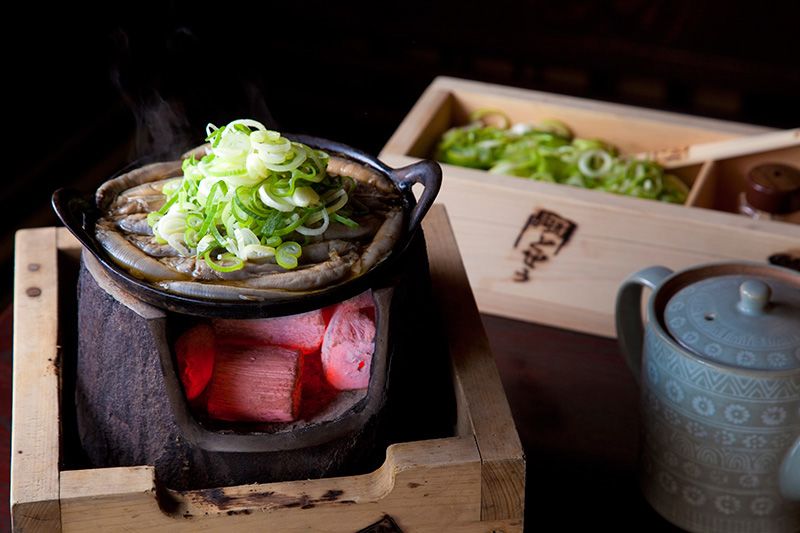 The dojō, or loach, is a freshwater fish often served at meals in the city of Edo (present-day Tokyo) during the Edo period. One such dish was the dojō nabe, prepared by cooking several whole fish inside a pot with other ingredients for a nutritious, energy-boosting meal. One restaurant specializing in the dish is Komagata Dojō, established back in 1801.