Hansen’s Disease in Japan: The Lingering Legacy of Discrimination

Politics Society Aug 17, 2016
Twenty years have passed since the repeal of the law mandating isolation of Hansen’s Disease (leprosy) patients in Japan. The government has recognized the injustice of the isolation policy and has moved to compensate the victims, but many former patients and family members still sense discrimination and prejudice.

“My life has been a struggle. I was a crybaby when I was little, but I became the strong person I am now by overcoming my sorrows and hardships one by one.” So declares 89-year-old Hirasawa Yasuji, a recovered Hansen’s disease (leprosy) patient residing at Tama Zenshōen in western Tokyo. “I’ve lived my life up to now with pride in having been born as a human being. Hansen’s disease patients and those who have recovered from the disease are striving twice as hard as other people every day.”

Hirasawa has lived at this sanatorium for people affected by leprosy since he was 14. He serves as a speaker at the neighboring National Hansen’s Disease Museum, delivering talks more than 100 times a year to visiting groups of elementary and junior high school students. He explains how his own life was buffeted by the former policy of isolating Hansen’s disease patients, and he talks about the hardships endured by the sanatorium inmates. But he also urges the visiting students to have dreams and hopes, telling them they absolutely must not treat their lives carelessly. 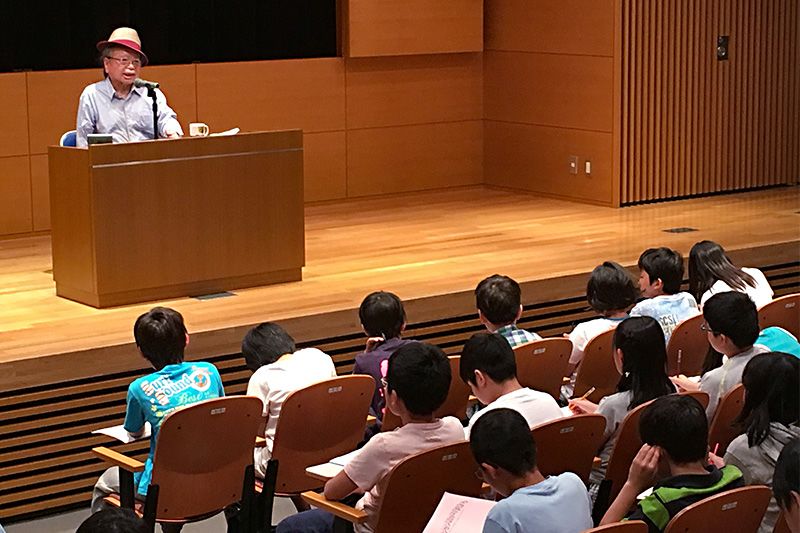 Hirasawa Yasuji, a recovered leprosy patient, speaks to a group of elementary school students at the National Hansen’s Disease Museum.

Though he was subjected to unwarranted discrimination and prejudice because he had Hansen’s disease, Hirasawa speaks energetically to the visiting students about human dignity and the joy of living. And as he does, the students gradually get caught up in his words.

“Thanks to international exchanges among people with disabilities, I now have friends in twenty-two countries. I’ve been to eleven foreign countries so far, and to just about every place in Japan.” At this point some adults in the audience may think Hirasawa has started to boast. But if so, they are quickly embarrassed at their own insensitivity as they listen to him continue: “But I still can’t visit my family home. And I continue to be told not to even visit my parents’ grave during the day.”

It is sad to think of the unfairness that people like Hirasawa suffered—not just being isolated from society but being cut off from their families. He declares: “Though I’ve been medically cured of Hansen’s disease, society still doesn’t treat me as cured. That’s the reality. Human beings harbor a demon of discrimination within themselves. I want you young people to drive these demons out—even just one of them.”

Incremental Progress in the Face of Deep-Seated Prejudice

Promin, a revolutionary new drug developed in the 1940s, made Hansen’s Disease curable. But the Japanese government continued its policy of forcibly isolating patients for many years thereafter. Even now, 20 years since the Leprosy Prevention Law was repealed in 1996, there is a lack of social understanding about this disease.

Bit by bit, however, progress is being made. Hirasawa says, “There are a lot of cases where elementary students who’ve listened to me have in later years talked their own grandparents out of their prejudiced ideas.” And the roads lined with cherry trees at Tama Zenshōen have become a popular destination, attracting people from the surrounding areas to view the blooming sakura every spring. 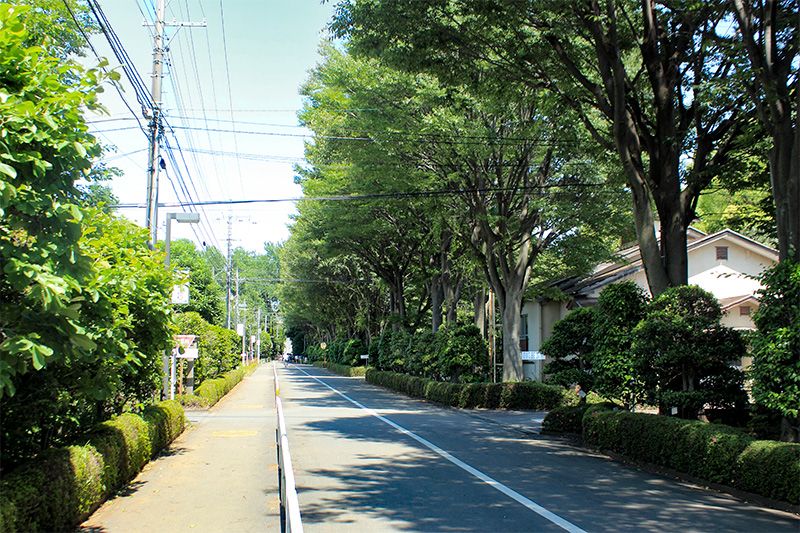 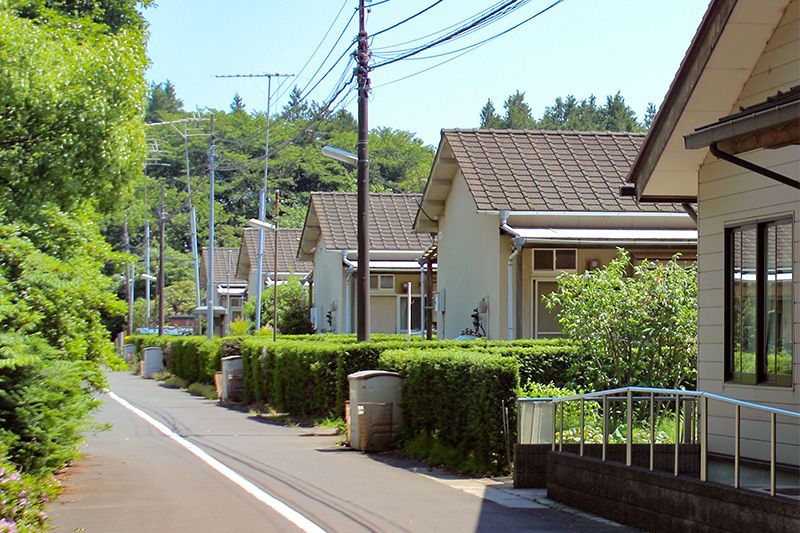 Row houses line a street in the residential area.

In 2015 director and screenwriter Kawase Naomi, winner of many international awards for her work, came out with a film version of the novel An, based on a novel of the same name. The story is set in a small shop selling dorayaki bean paste sweets, where a former leprosy patient who is seeking to rejoin society takes a job but encounters resistance from the local community. Parts of the film (also titled Sweet Red Bean Paste and Sweet Bean in English) were shot in Higashimurayama, the municipality where Tama Zenshōen is located, with cooperation from local residents.

Kuroo Kazuhisa, deputy director of the National Hansen’s Disease Museum explains that the understanding of area residents has progressed in small increments over a long period of time. He also notes that the attitudes of the former patients have shifted greatly. In the past their struggles were directed mainly at securing better conditions within the sanatoriums, but since the repeal of the Leprosy Prevention Law in 1996, they have sought and won reparations and an apology from the national government, along with the restoration of their honor. And unlike the earlier campaigns, which were commonly conducted just within the sanatoriums, their efforts have been carried out in liaison with civic movements, and their claims have come to be heard more broadly among the general public.

Aging Sanatorium Residents Seek to Have Their Memories Preserved

As of May 1, 2016, there were 1,584 former patients residing in 14 national and private Hansen’s disease sanatoriums around Japan. Their average age is now over 83, and increasing numbers of them require nursing care. A nationwide survey in 2015 found that 26.4% were affected by dementia, 8.4% were bedridden, and 26.9% required assistance with meals (multiple responses were possible).

Some former patients have aftereffects from the disease, such as stupor and loss of sight. Many see their sanatorium as their final home, having been cut off from their families and fearing that they will encounter social discrimination and prejudice elsewhere. The national government needs to step up the provision of nursing care support so that these people can live out their lives in tranquility.

Meanwhile, the scale of the sanatoriums, which formerly had a nationwide capacity of about 10,000, is shrinking sharply, and deliberations have started concerning the use of former sanatorium sites. Residents have been calling for the facilities to be preserved permanently to remind people of the country’s unjust policy of isolating leprosy patients and to serve as places for people to think about human rights; they also do not want the locations where they spent their lives to be forgotten. 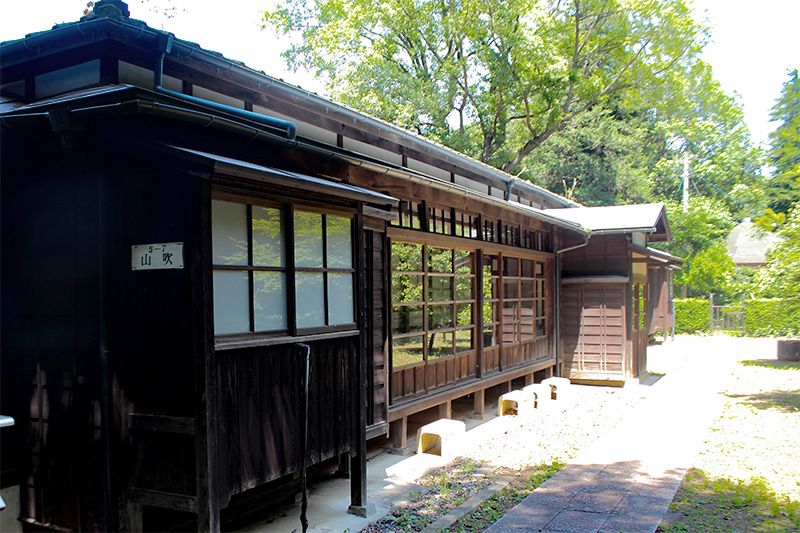 This building at Tama Zenshōen, called Yamabukisha, was put up in 1928 and served for 77 years as a dormitory for single males with mild cases of Hansen’s Disease. In 2003 it was restored for preservation. 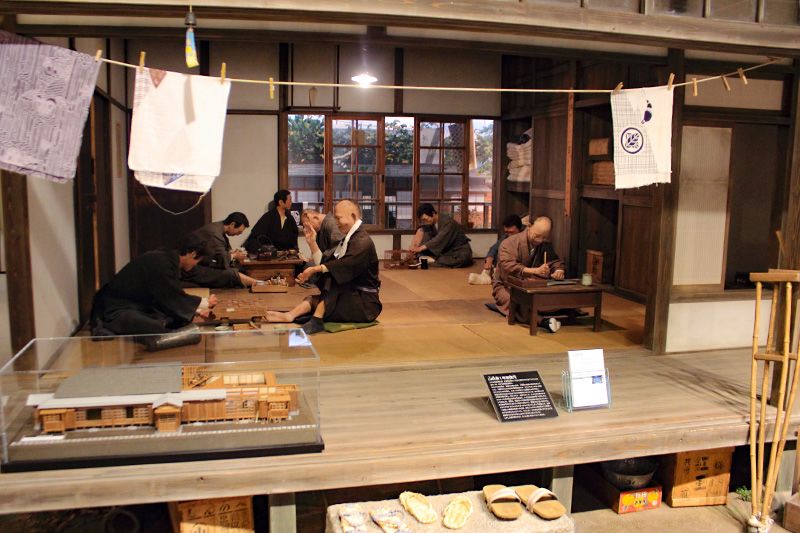 A diorama at the National Hansen’s Disease Museum recreates a scene from the 1920s at Yamabukisha. 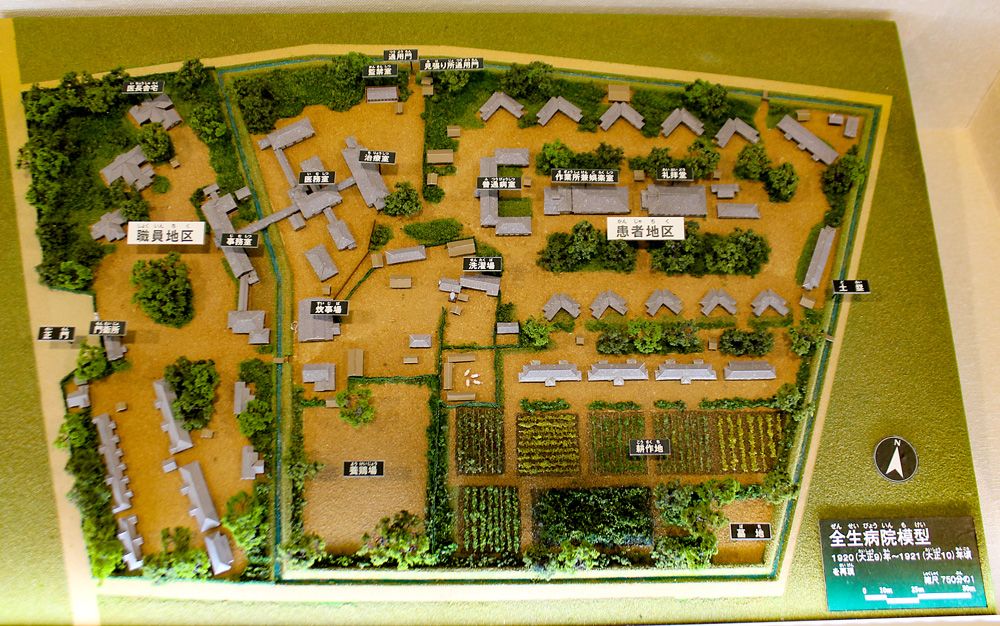 A scale model of Tama Zenshōen around 1920. At the time it was called Zensei Hospital, and the employees’ area was clearly separated from the patients’ area. (National Hansen’s Disease Museum) 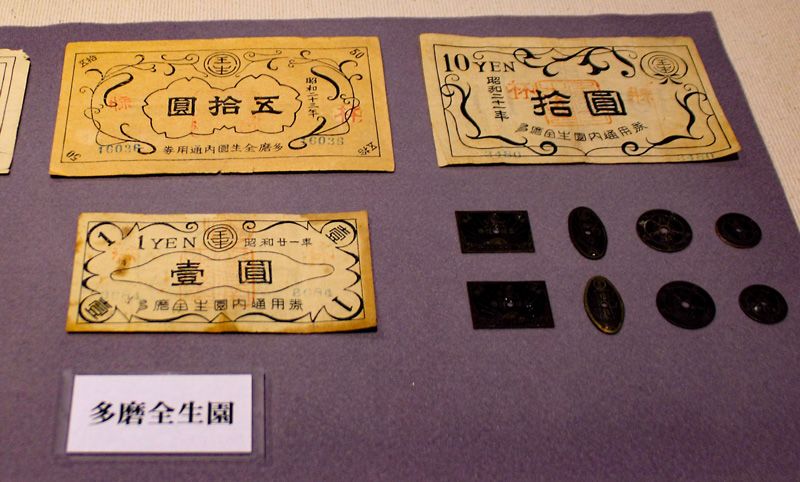 Residents were formerly required to use special bills and coins in place of regular currency; this system was abolished nationwide in 1953. (National Hansen’s Disease Museum)

Addressing the Suffering of Patient’s Children

Two decades after the repeal of the Leprosy Prevention Law, a new issue has emerged. In March this year some 568 members of former patients’ families filed a suit with the Kumamoto District Court seeking compensation and apologies from the national government. It is the first such class action suit relating to the suffering of family members, and it was filed just before the deadline for compensation claims under the Civil Code.

The plaintiffs claim that they were subjected to unwarranted discrimination and suffering in every aspect their lives, including schooling, employment, and marriage, as a result of their parents’ internment. Many say they cannot reveal their names out of fear of deep-seated discrimination and prejudice.

In 2001 the courts reached a final decision recognizing that the policy of compulsory isolation had been unconstitutional and that former patients were entitled to compensation from the national government. Since then former patients have received reparations, but such payments have not been extended to their children.

The damage from the discrimination against Hansen’s disease patients has yet to be cleared away.

Hansen’s disease, which attacks the nervous system, can result in permanent deformation of patients’ faces and limbs, and this sort of visible deformity has caused victims of the disease to become the target of prejudice and discrimination. In Japan, the system of compulsory isolation of patients was implemented by the national government in 1907 and remained in effect until 1996, well after effective drug treatments had been developed and the global trend had switched to outpatient care. Prefectural governments were the key actors implementing the policy, and some conducted campaigns in concert with private citizens to track down patients and forcibly intern them in sanatoriums with the goal of making their jurisdictions “leprosy free.” Those interned were given new names, forced to undergo sterilization and abortion operations, and cut off from their families. Patients’ family members and relatives were also subject to discrimination within their communities.

(Originally written in Japanese with accompanying photos by Ishii Masato of Nippon.com and published on July 12, 2016. Banner photo: Elementary school students visit an ossuary housing the remains of deceased residents at Tama Zenshōen. Over 4,000 residents of the sanatorium have died since the facility was established, and in most cases their cremated remains have been interred here rather than in family graves.)