Society Culture Mar 25, 2015
To the Japanese, the cherry blossom is more than just a flower. For centuries the sakura has been an integral part of the culture, from music and the performing arts to handicrafts and cuisine.

To many Japanese and foreigners alike, there is no single image more synonymous with this country than that of softly falling cherry blossoms, or sakura. Although Japan has no official national flower, the sakura surely vies with the imperial emblem, the chrysanthemum, for the title.

Few things are as evocative of spring as sitting beneath a canopy of fluffy pink petals, and as such the Japanese have granted these flowers a special significance in the pantheon of blooms ever since the Heian period (794–1185). The first recorded use of the term hanami (literally “flower viewing”) to refer specifically to savoring the spectacle of sakura can be found in Murasaki Shikibu’s classic The Tale of Genji. Since then, it has become a national spring pastime. 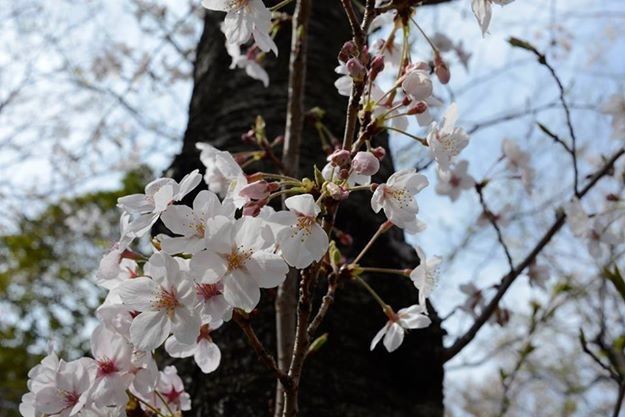 The flowers of the Yoshino cherry.

But there is rather more diversity to sakura than the catchall name suggests. Over 600 distinct varieties of cherry blossom have been identified in Japan, both endemic species and domesticated hybrids. These range in color from white to an almost crimson hue, but by far the most common sight is the pale pink of the five-petal Yoshino cherry. This strain was produced by breeders in the mid–Edo period (1603–1868) and extensively planted across the country from the Meiji era (1868–1912) onward.

There are countless famous hanami spots across Japan, with the best-known―such as the banks of the Hinokinai River in Kakunodate, Akita Prefecture, and Tokyo’s Inokashira Park―drawing immense crowds each spring to their rambling sakura-lined promenades. But other locations manage to create an equally splendid tableau with only a single magnificent, old cherry tree. Among these are the Jindai Zakura in Kiyosato, Yamanashi Prefecture, and Fukushima Prefecture’s 1,000 year-old Miharu Takizakura.

The significance of cherry blossoms, however, doesn’t end with hanami. From the west of Japan to the Kantō area around Tokyo, the peak season for sakura comes from late March to early April, a period that also marks the end of the academic and business years. The steady stream of graduations and other partings of the ways, followed by entrance ceremonies for schools and companies, are all accompanied by the gentle tumbling of petals. This has cemented the traditional role of these flowers as a symbol of impermanence. 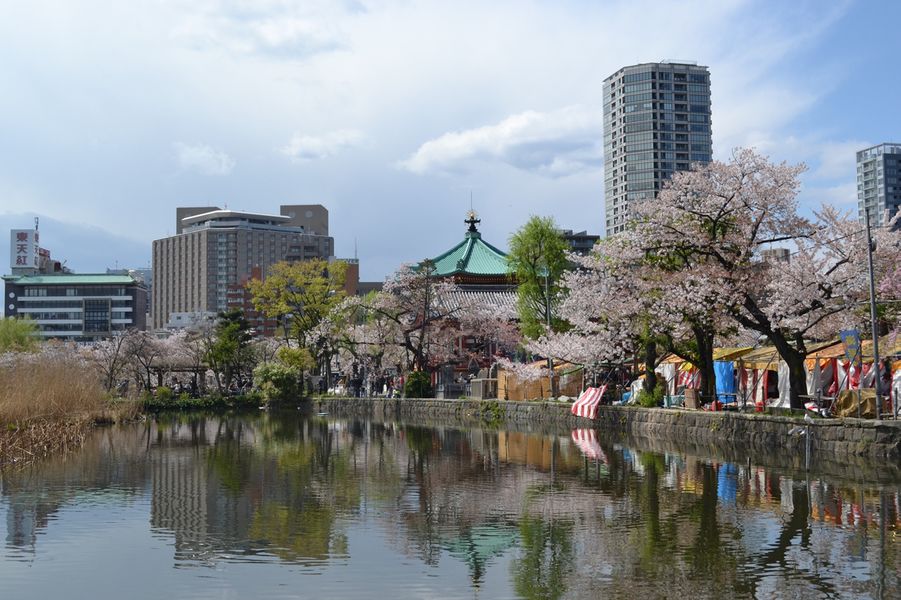 The cherry trees are not just for looking at. The strong, warp-resistant wood of some varieties has long been prized for the making of furniture and kitchen implements. And while most species of ornamental cherry do not produce edible fruit, the succulent cherries that grow on the Prunus avium tree are a delicacy. Even the soft leaves of the Ōshima cherry are pickled with salt to be used in traditional confectionery and other dishes. 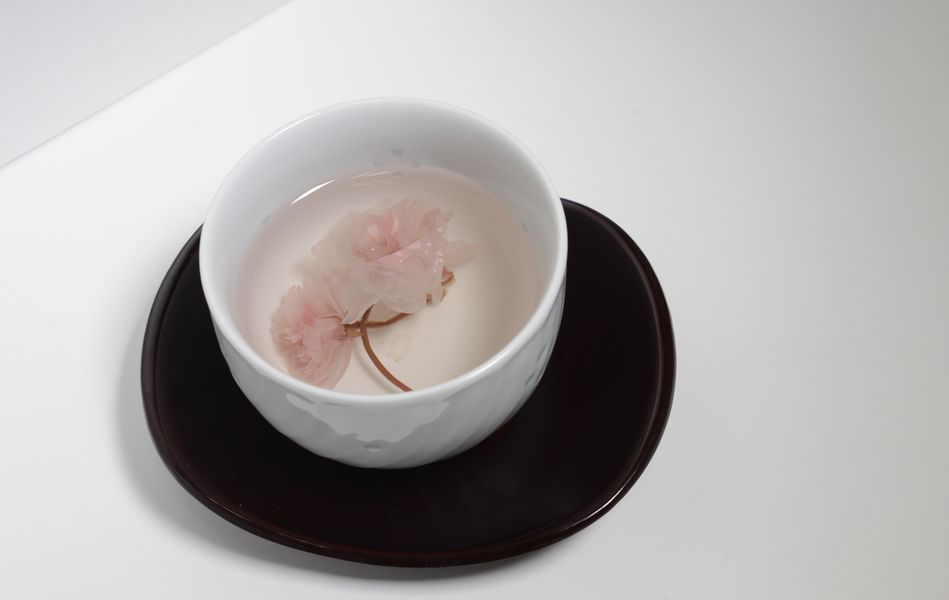 Sakurayu, a hot beverage made from pickled cherry blossom heads.

A similar preparation is sometimes applied to the flowers themselves. When steeped in warm water, the salt-pickled flowers gently open, as if in bloom. This is seen as a signifier of good luck, making the resulting beverage, named sakurayu, a popular drink for auspicious occasions. The buds can also be used to garnish cookies and pastries, or mixed into rice as it cooks, to give a meal the delicate scent of cherry blossoms. 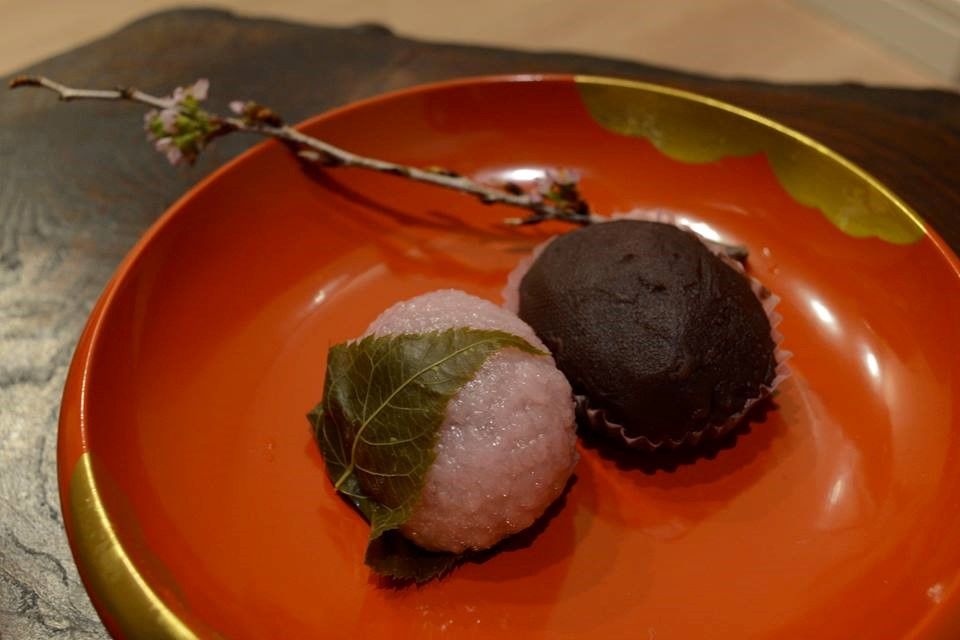 Woven into the Very Fabric of the Culture

The first reference to sakura in Japan’s historical literature came in the 720 chronicle Nihon Shoki, which includes a tale of how a cherry petal once fell into the sake cup of the early fifth century Emperor Richū. From that point on, the cherry blossom has made innumerable appearances in Japan’s literary canon, both in direct references to the flower’s beauty and descriptions of hanami scenes, and as a metaphor for fleeting, transient beauty.

Haiku and other Japanese poetry are also filled with seasonal references to sakura, such as sakuragumo (“sakura clouds,” the overcast weather that often accompanies the season when the flowers are in bloom), and yozakura, cherry blossoms by night. The traditional performing arts, including kabuki and rakugo, are also filled with tales of haunted cherry trees and of hanami parties as the setting for tangled human dramas to play out.

For centuries these blossoms have also been a recurring theme in music. Everybody in Japan knows the Edo-period folk song “Sakura, sakura,” but there are well over a hundred Japanese pop songs with the word sakura in the title, and countless others that utilize the motif in their lyrics.