Ibasho House: A Communal Place in an Aging Local Community

Society Aug 30, 2016
Located in Ōfunato, Iwate Prefecture, one of the areas worst affected by the 3/11 disaster, Ibasho House is a place where the elderly contribute to their local community. The aim is to create ways for people to participate in society in a dignified manner, whatever their age.

In June 2013, two years after the Great East Japan Earthquake, a new place called Ibasho House opened in the Massaki district of Ōfunato, Iwate Prefecture. Originally an initiative proposed by Ibasho, a Washington DC–based nonprofit organization, the building itself was an old farmhouse moved and reconstructed using disaster reconstruction funds provided by the US company Honeywell. (Ibasho is a Japanese word that came into common use in the 1990s with two core meanings: a place where one feels at ease and a place where one has a role to play.)

Ibasho House began as a community cafe where all were welcome. Older members of the local community make up the core group of visitors, but during school holidays children also drop by to play. Ibasho House observes special events, such as Hinamatsuri (the doll festival), Tanabata (the star festival), Bon-odori dancing, and Christmas, and also hosts group activities from ikebana (flower arranging) and communal sing-alongs to class reunions. There are currently about 20 visitors per day, and the aggregate number of visitors in the three years since its opening has reached about 17,600 people.

Ibasho House’s day-to-day operations are managed by Ibasho Sōzō Project, an NPO formed by Massaki residents with a core membership that would generally be considered elderly. The members contribute their own time and expertise to take care of daily tasks, such as cooking, caring for plants, carpentry, and computer work.

It is also these members who plan and execute the various seasonal and other activities at Ibasho House, learning through trial and error along the way. Two major initiatives introduced by the members are the farmer’s market and the cafeteria. Because there were almost no businesses in the area where residents could go shopping or have a meal, a monthly farmer’s market was begun in October 2014. In May of the following year the cafeteria opened, with a kitchen created outside Ibasho House by a team of retirees who had been involved in construction. As this example shows, Ibasho House’s activities go beyond diversions and entertainment to include projects that make the community as a whole a better place for its residents.

The core members are not the only ones involved in Ibasho House’s operations. Some visitors help out by washing dishes, clearing tables, and even bringing refreshments. Some visitors who are unable to offer labor bring sugar and other supplies instead; others lend Ibasho House precious antique dolls from their homes to put on display for the Hinamatsuri festival. Recognizing that not everyone can contribute in the same way or to the same extent, Ibasho House places more importance on the willingness to contribute in any way possible. 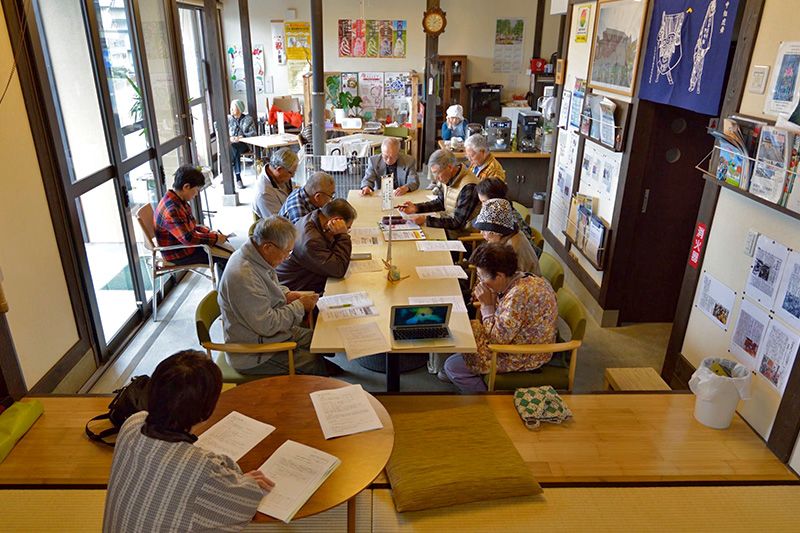 At the monthly operational meeting.

A Precious Wellspring of Wisdom and Experience

The most important principle promoted by Ibasho is the insistence that although there is a tendency to see the elderly as burdensome net recipients of care and attention from others, in fact, their wisdom and experience let them create local communities rich in interpersonal connections. In itself, of course, this is not sufficient as a solution to the problems of an aging society. As people grow older, they naturally face new difficulties and cannot be as physically active as they once were. Nevertheless, the elderly individuals who contribute to Ibasho House according to their abilities are irreplaceable members of the community. Aging itself is not the problem. The aim is to realize a local community where people can participate in a dignified manner whatever their age. 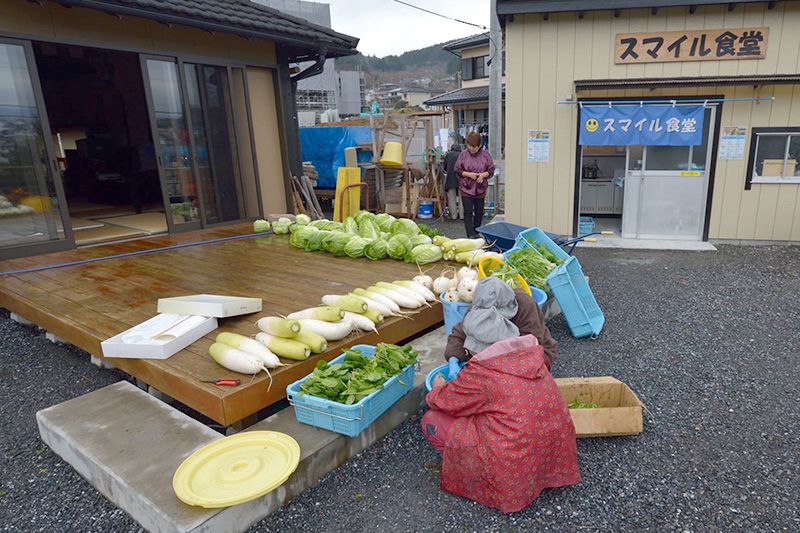 Preparing to sell freshly harvested vegetables at the farmer’s market.

(Originally written in Japanese. Banner photo: Ibasho House, a place where elderly and other members of the community can spend time however they please. All photos © Tanaka Yasuhiro.)