Society Culture Jul 4, 2015
According to legend, each July 7 the weaver star and cowherder star traverse the Milky Way to renew their ancient bond of love. In Japan, the lovers are celebrated with lively decorations and wishes written on long, narrow strips of colored paper. Observed throughout the country, many cities, including Sendai in Miyagi Prefecture, have become famous for hosting elaborate celebrations.

Tanabata, or the star festival, is observed on July 7. As the date approaches, long, narrow strips of colorful paper known as tanzaku, vibrant ornaments, and other decorations are hung from bamboo branches, enlivening the decor of homes as well as brightening shopping arcades, train stations, and other public spaces. Before they are hung, tanzaku are inscribed with a wish, such as a child’s dream of becoming a famous soccer player or a parent’s hope for career success. 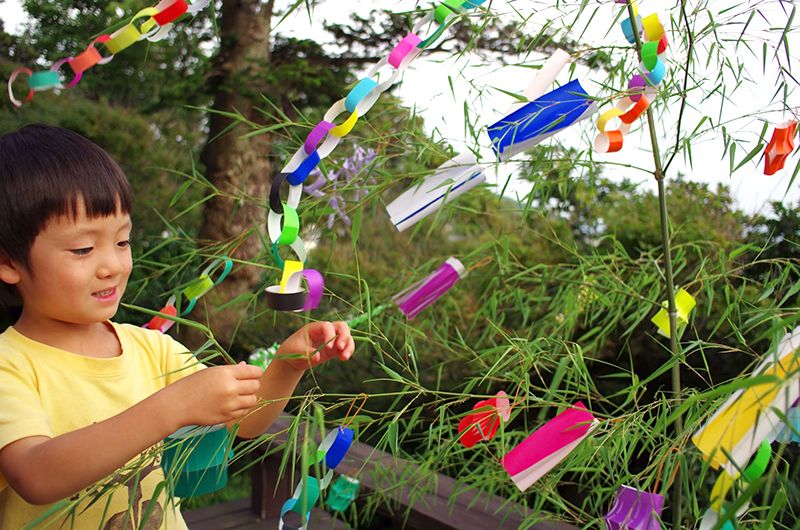 A child places tanabata decorations on a bamboo branch.

Tanabata is one of Japan’s five traditional seasonal festivals, or gosekku, originating in China and first observed in Japan by the ancient imperial court. The stellar holiday centers on the stars Vega and Altair in the constellations Lyra and Aquila, respectively. Following the ancient Chinese lunar calendar, the festival marks the once-yearly meeting of Orihime (Vega), the weaver star and patron of silk farming, and Hikoboshi (Altair), the cowherd star and agricultural messenger. 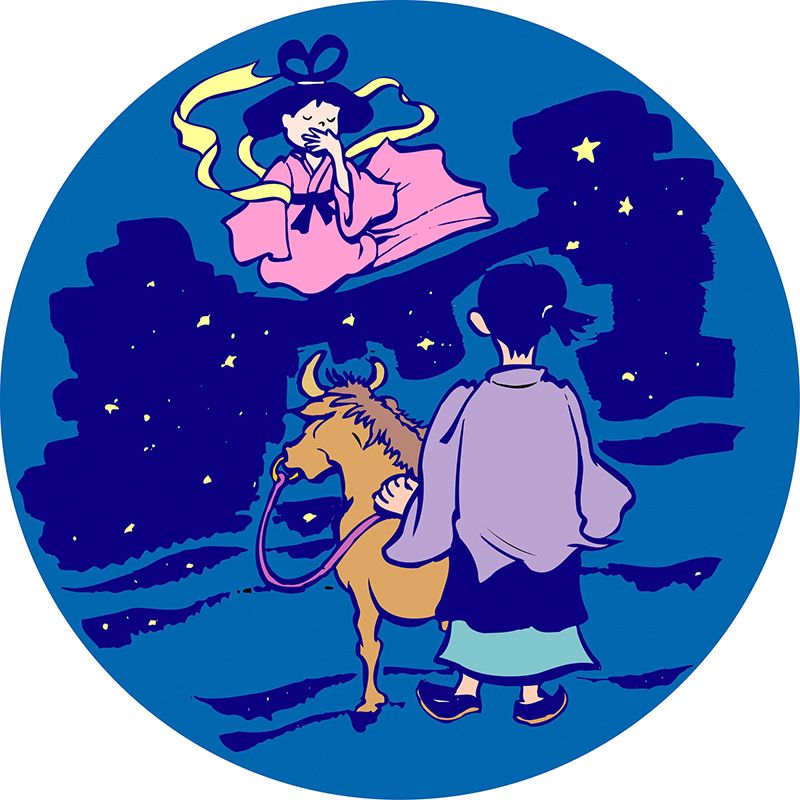 Orihime and Hikoboshi meeting across the Milky Way.

According to the folktale, Orihime, a gifted weaver, and Hikoboshi, a hard-working cow herder, began to neglect their duties upon being wed. The couple incurred the wrath of the bride’s father Tentei, the emperor of heaven, and were exiled to separate ends of the Milky Way. They are granted a meeting each July 7 so long as they both diligently fulfill their celestial obligations during the other days of the year.

The legend behind the star festival first crossed over to Japan from China during the Nara period (710–94) in the form of a weaving festival for young women aspiring to bolster their talents on the loom. The story merged with the Japanese legend of tanabata-tsume, the tale of a celestial maiden who weaves clothes for the gods, as well as other native cultural aspects to produce a unique Chinese-infused Japanese tradition.

Wishing on a Star

When tanabata first arrived in Japan aristocrats in the imperial court would hold poetry contests to celebrate the festival, writing verses as they gazed up at the stars. It wasn’t until the Edo period (1603–1868) that the star festival was observed among the broader populace. It was during this period that the tradition of writing wishes on tanzaku and hanging them from branches of bamboo appeared. 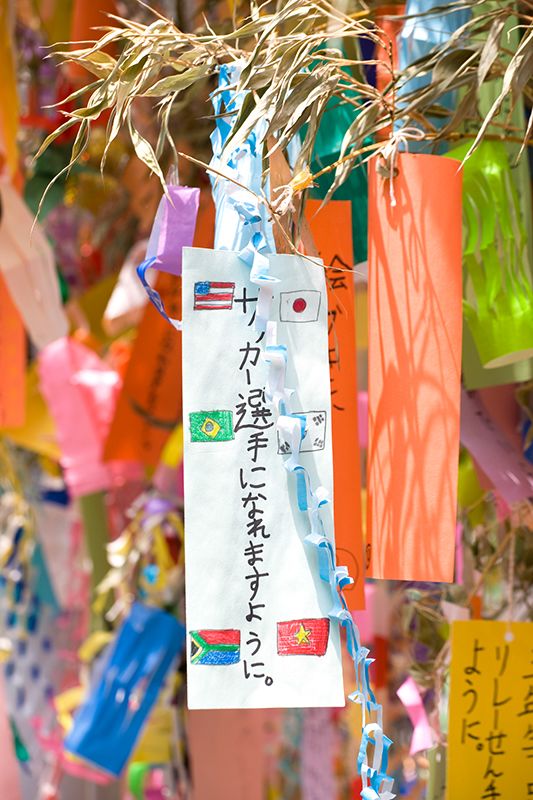 A tanzaku with a child’s wish of being a soccer player hangs from a bamboo branch.

The expression of hopes and dreams is not limited to tanzaku. Traditional decorations and talismans include colorful streamers called fukinagashi that represent threads for those wanting to be better weavers and gossamer amikazari symbolizing wishes by fishermen for full nets. There are also hanging kinchaku bags for prosperity and orizuru (folded cranes) for longevity. Items are easily constructed from origami and other light, colorful materials. In the past, ornament-laden bamboo branches were placed in rivers to be carried away by the current as a means of ensuring that wishes would be granted. However, modern environmental consciousness has seen this tradition largely fall by the wayside.

Bamboo is thought to have become a part of the tanabata tradition for its propensity to grow straight and tall, with upward stretching branches bearing wishes to heaven on the wind. The plant was also believed to ward off insects and was displayed to protect rice crops and symbolize hopes of a bountiful harvest.

The traditional fare of the star festival is sōmen. The long, thin noodles evolved from a woven Chinese sweet known in Japanese as sakubei, whose intertwined strands were thought to resemble both the Milky Way and the weaving threads worked by Orihime. Sōmen is commonly enjoyed in a light dipping sauce. Many parents will amuse their children by topping noodles with star-shaped slices of boiled okra.

The timing of tanabata celebrations varies by region. Japan adopted the Gregorian calendar in 1872, placing the holiday on July 7. However, many areas still rely on traditional reckoning to schedule festivities, with observances normally falling sometime in August. 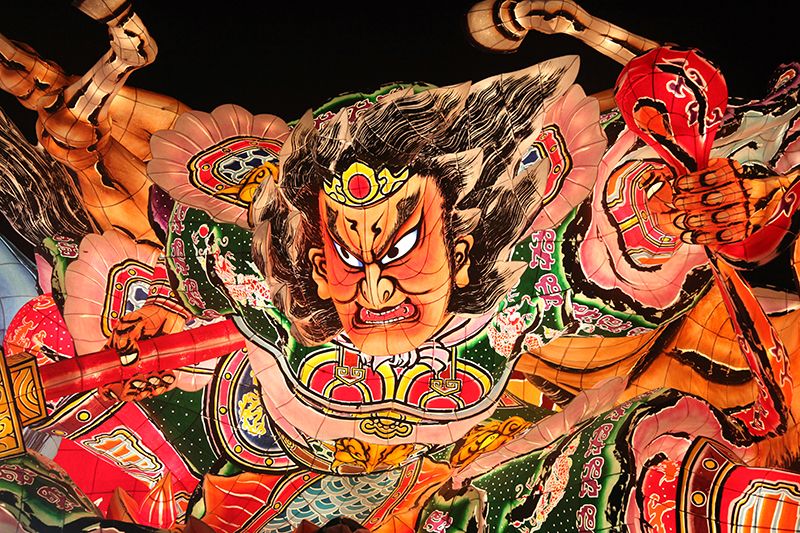 An illuminated float at the Nebuta Festival in Aomori City, Aomori Prefecture. (© Jiji)

Three of the largest tanabata festivals are the Sendai Tanabata Matsuri in Miyagi Prefecture, the Shōnan Hiratsuka Tanabata Matsuri in Kanagawa Prefecture, and the Anjō Tanabata Matsuri in Aichi Prefecture. One of the Tōhoku region’s most vibrant summer celebrations, the Nebuta Festival, is also said to have its roots in the star festival. The parade of intricate illuminated floats in this event is thought to have begun as a purification ritual where lanterns were released into rivers and the sea on the evening of tanabata.

Enjoying these popular events will require early planning to beat the crowds. However, there are also many small, regional star festival celebrations as well as special events at various venues, such as Tokyo Disneyland and Minami-Tenma Park in Osaka.