Society Mar 19, 2018
More than two-thirds of Japanese territory is forestland. This has fostered a culture of reverence and appreciation for forests and trees. Presented here is an overview of the history of forest conservation in Japan.

The Public Movement to Preserve the National Forests

Asked to name the most beautiful forest in the world I would respond without hesitation, “The buna groves of northeastern Japan.” I have visited well-known forests around the world, but none strike me as being as beautiful as a buna or Japanese beech (Fagus crenata) forest. In the spring, newly sprouting buna leaves reflect the glittering sunlight and waves of new green surge up the mountainsides as the snows melt. In the autumn, mountains and valleys glow with the golden yellow of buna foliage, and in deep winter, the buna trees with their spreading branches stand tall and proud.

The changing aspects of buna groves through the seasons. (© Anezaki Kazuma)

In 1970 I was called to the foothills of Yamagata Prefecture’s Asahi mountain range by a local matagi, a traditional huntsman for whom the buna forests are favored hunting grounds. What he showed me was the devastating sight of whole stands of buna felled to the ground as if the slopes had been sheared with barber’s clippers. Gone was the mighty forest; gone were the perches for the nesting kumataka mountain hawk-eagles (Nisaetus nipalensis).

In the name of forest expansion, the Forestry Agency had launched a program to replace “useless” native buna groves with plantings of cryptomeria (Japanese cedar) and cypress trees that had greater commercial value as lumber. But this policy was anathema to those whose livelihoods depended on the buna forests and to those of us who simply loved the great trees for what they were. We were soon driving a movement protesting the government policy that eventually brought the deforestation to an end.

The battle was to continue, however. A decade later it was learned that plans were underway to cut a lumber road through the virgin buna forest of Shirakami-Sanchi, an area of the Shirakami mountain range spanning the two prefectures of Aomori and Akita. Local residents rose up in protest and in 1993 succeeded in having the area registered as a UNESCO World Heritage Site. Now, at last, the whole world knew of the beauty of Japan’s native forests.

The movement to protect the buna stands of Shirakami-Sanchi triggered a renewed awareness of the value of our forests and led to similar protests against deforestation throughout the country. This civil movement saved the buna, though only just barely—and, I believe, revived within the Japanese ethos the traditional affinity for all that is green.

Japan ranks third among the world’s advanced regions—after Finland and Sweden—in the expanse of its forestland as a percentage of national territory. For a highly industrialized country with a large population to have more than two-thirds of its territory covered by forests is absolutely incredible.

Conservation International and other international environmental organizations have designated areas with significant biodiversity that are threatened with destruction as “biodiversity hotspots.” There are currently 35 such hotspots, including the Japanese archipelago.

All of these hotspots combined account for only 2.3% of global landmass, yet they contain 75% of mammals, birds, and amphibians, and 50% of higher plant life, that are threatened with extinction.

Despite Japan’s limited territory it has a high degree of biodiversity. Of the 130 or so species of terrestrial mammals that live in Japan, 36% are found only in this country, and the habitats of 80% of these endemic species are in or bordering on forestland. Additionally, of the roughly 7,000 species of wild plants that grow in Japan, around 2,900—40%—are to be found only here, a number of endemic species even greater than that for the Galápagos Islands. 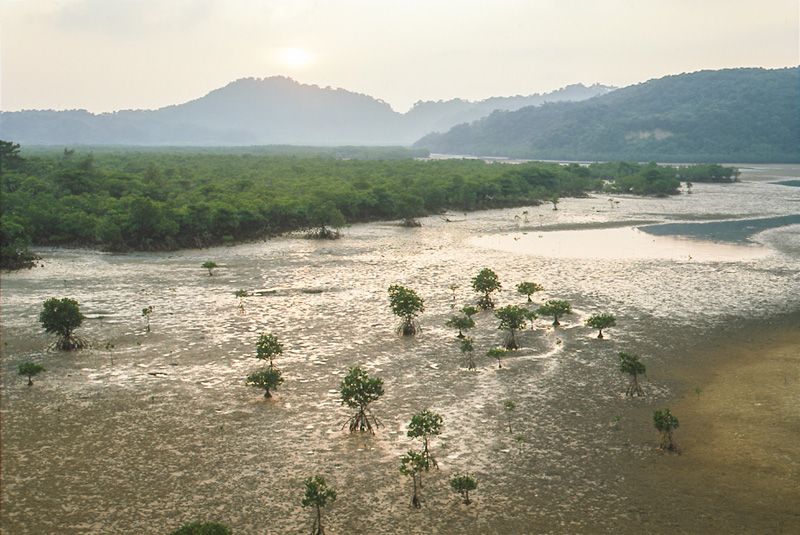 One of Japan’s “biodiversity hotspots”: the mangrove forest on Iriomote Island. (© Anezaki Kazuma)

A Culture of Reverence for Trees and Forests

Over the centuries Japan has developed its own indigenous culture of reverence and appreciation for trees and forests. Wooden artifacts excavated from prehistoric sites dating to the Jōmon period (10,000–400 BC) are made of more than 30 different types of wood used selectively for building materials, farming tools, utensils and vessels, fuel, weapons, and dugout canoes.

The Japanese love for trees remains strong to this day. The great shinboku, the sacred trees that tower over our shrines and temples, fill us with reverence and nostalgia. Ninety percent of Japanese buildings and structures designated as important cultural assets, and all those designated as national treasures, are constructed of wood. 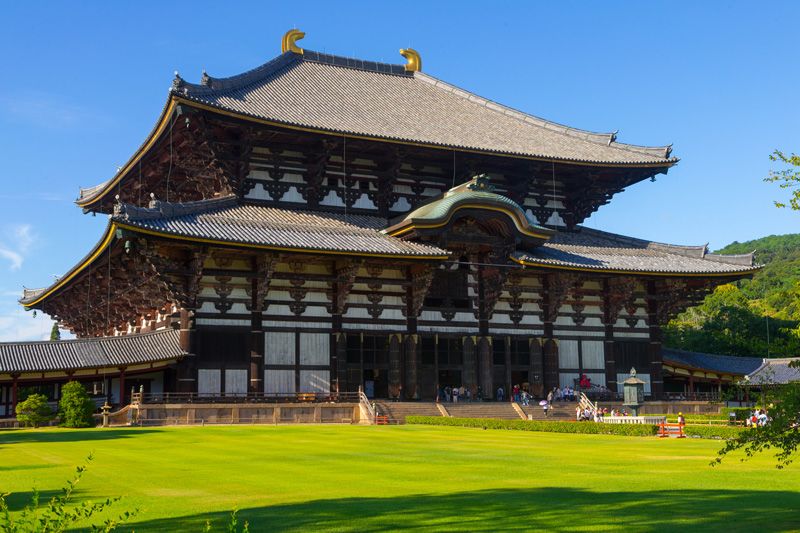 The Great Buddha Hall of Tōdai-ji in Nara, Japan, is one of the historical wooden structures designated a national treasure in Japan. (© Aflo)

Japan is also unusual for the extent of its poetry and literary works featuring trees, woodlands, and the animals that live in them. One-third of the 4,500 poems in the Man'yōshū, compiled between the seventh and eighth centuries, are about trees, flowers, and nature, and reflect the sensibilities of a broad range of contributors, from emperor to commoner.

With their plentiful rainfall during the growing season from spring through autumn, the Japanese islands offer an ideal environment for forests to flourish. The eastern edge of Eurasia is globally unusual for being home to contiguous variations in vegetation ranging from the subarctic to temperate and subtropical zones; with large-scale deforestation along the eastern seaboard of China, on the Korean peninsula, and in the Russian maritime provinces, a continuous belt of forestland spanning all these zones is only to be found in Japan today.

Japan’s complex topography has been conducive to the creation of integrated satoyama landscapes of cultivated rice paddies and well-tended woodlands. The rice paddies provide a natural habitat for a diverse range of living creatures while also helping to prevent flooding with their well-managed irrigation and drainage systems. In turn, the surrounding forests help to anchor the terrain and prevent landslides. The forests also provide lumber and bamboo, resources for fuel, fertilizer, and animal feed, and a variety of edible wild vegetables, fruits, and animals. 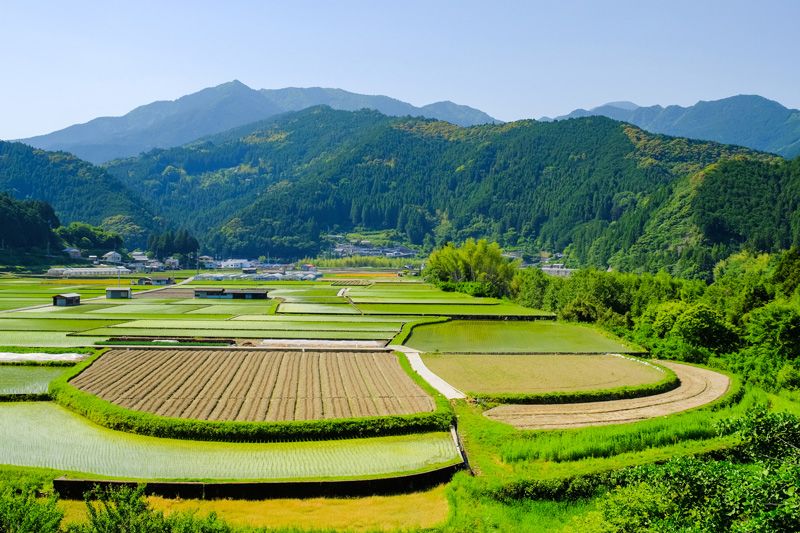 A satoyama scene in summer. (© Pixta)

The forestry policies of the bakufu and domain governments became increasingly conservationist through the Edo period (1603–1868) as the detrimental consequences of unrestricted development became evident. Tokugawa Ieyasu’s consolidation of the country under one rule in the seventeenth century led to a major building boom of castles, including the Edo, Sunpu, and Nagoya castles, the spacious homes of the samurai and wealthy merchants, and innumerable temples and shrines. This in turn led to the expansion of rice paddies in the flatlands and deforestation of the surrounding hills and mountains, triggering numerous floods and landslides. Reforestation and careful land management were therefore essential and encouraged.

Forest Preservation in the Edo Period

The protagonist of Yoakemae (trans. Before the Dawn), a historical novel by Shimazaki Tōson (1872–1943), is the head of a family that has held sway for generations over Kiso-Magome-juku, one of the stations on the old Nakasendō highway between Kyoto and Edo. He has great hopes following the Meiji Restoration of 1868 that he will now be able to develop the surrounding mountain forestland, but instead the land is nationalized by the new government and all tree cutting is prohibited. Unable to adapt to the new order of things, the protagonist dies in bitter disappointment.

The novel describes in detail the forest conservation efforts of the preceding Edo period. In the Kiso valley, where Magome-juku is located, the local Owari lords assigned portions of the forests to various uses. There was the Tomeyama area that local villagers were prohibited from entering; the Suyama area, a habitat for hawk-eagles that was reserved for their hunting; and the Akiyama area that could be used freely by everyone. The designations were strictly enforced and it was well known that destruction of even one tree could cost an offender his head.

Kumazawa Banzan (1619–91), a Confucian scholar in service to the Okayama domain, was a major proponent of environmental measures, and was well on the way to developing a concept of ecology nearly two centuries before the German biologist Ernst Haeckel (1834–1919) coined the term in 1870.

In his Daigaku wakumon (Questions on the Confucian Classic Great Learning), Banzan proposed a policy to restore barren mountains. “There is a way to restore vegetation to barren mountains. Scatter millet on each peak and in each valley and cover with fallen leaves and dried reeds. Birds will come to peck at the millet.

“The nuts excreted with the bird droppings will sprout easily. The layer of fallen leaves will force the birds to hunt for the millet and therefore stay longer. Do this, and in about 30 years, you will see the growth of new shrubbery and thickets, and the villagers will no longer have to worry about kindling.”

Arms Buildup and the Destruction of the Forests

In 1897, after the Meiji Restoration, the new Japanese government enacted a law regulating the felling of trees. But oversight was lax, and it was not long before there was unbridled cutting of whole forests. By the middle of the Meiji era (1868–1912) Japan’s woodlands were in their worst state in history. In addition to the building boom, the country’s modernization created an unprecedented demand for electric poles and railroad ties. Lumber was needed as well for scaffolding, posts to reinforce tunnels, shipbuilding, and docks, and this further inflated demand.

After the 1894–95 Sino-Japanese War and the 1904–05 Russo-Japanese War, however, the prospering forestry industry turned to reviving the devastated woodlands, planting new trees in place of the natural forests that had been felled as a means of ensuring a continuous supply of lumber. The government stepped in to support the effort in 1907 and later provided subsidies for the reforestation of privately owned land.

The military buildup of the 1930s created new demand for lumber to build warships and military facilities, as well as to reinforce tunnels and underground shelters. This accelerated the tree cutting and deforestation, extending even to scenic forestlands, windbreaks, and the great, sacred trees at shrines and temples.

The destruction of the land during and after World War II was much worse and more devastating than that of the mid-Meiji era. Air raids annihilated nearly 20% of the country’s forests and fields. The reconstruction efforts to restore the wasteland that was left led to even more rampant cutting of trees, including the felling of indigenous virgin forests. The media clamor to make use of Japan’s “bountiful” natural resources grew louder as the country rushed to rebuild more than 2.2 million lost homes, as well as housing for more than 6 million Japanese being repatriated from overseas, in addition to building new infrastructure and factories. The government obliged by accelerating the process.

Barren mountains and hillsides were to be seen everywhere. A children’s song by the songwriter Yoshida Chōko (1920–73) that became a hit in 1944 sang of the “bald hill, everyone’s laughingstock.” 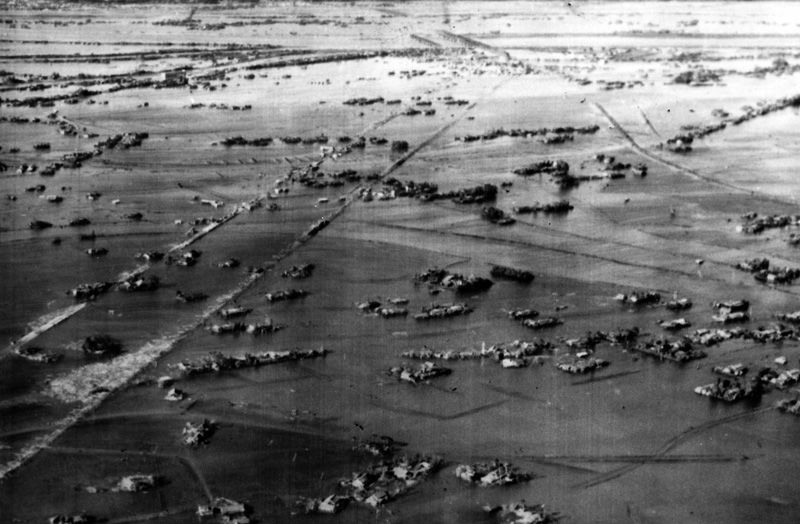 The aftermath of the powerful Isewan Typhoon, which swept across Japan in 1959 from the Kii Peninsula across the Tōkai region. The typhoon left 4,759 people dead and 282 missing. (© Mainichi Shimbun/Aflo)

There was an urgent need to secure the safety of the land and conserve the forests that served as the nation’s watersheds. The year after the end of the war, reforestation and erosion control projects were incorporated into public works. In 1950, the government set up a committee for the greening of national lands and launched an all-out replanting program punctuated by national tree-planting festivities. It took a decade to complete the project.

(Originally published in Japanese on July 18, 2017. Banner photo: The buna trees of the World Heritage Site of Shirakami-Sanchi. © Anezaki Kazuma.)