The Shinkansen Turns 50: The History and Future of Japan’s High-Speed Train

Society Oct 1, 2014
On October 1, 1964, the shinkansen began commercial service between Japan’s two largest cities of Tokyo and Osaka. Now 50 years on, the iconic train runs from Aomori in the north to Kagoshima in the south. We take a look back at the country’s “bullet train” and peek down the tracks to see where it is headed next.

From “Bullet Train” to Shinkansen

Japan’s first railway line opened in 1872, plying the tracks between Shinbashi in Tokyo and Yokohama to the south in Kanagawa Prefecture. The line was constructed using 1,067 mm narrow-gauge rails, a decision thought to have been made on the advice of British engineers enlisted by the Japanese government to introduce European rail technology. According to some reports, it was under the guidance of these engineers, who argued closer rails would be more suitable to Japan’s largely steep terrain, that Japan opted for narrow-gauge.

In the subsequent decades, railroad authorities made several unsuccessful attempts to switch to a 1,435 mm wide-gauge format—most notably in the early twentieth century, when Japanese advancements in Asia required the government to consider converting to a broader single standard to accommodate faster trains. While the Japanese Government Railways expended huge amounts of political capital pushing these plans forward, in the end, the narrow gauge remained the norm.

One example of these efforts was the Dangan Ressha (bullet train) Project. Conceived in 1939, the project had the aim of boosting the transportation capabilities of the Tōkaidō and San’yō Lines, which included switching to wide-gauge rails to enable high-speed passenger and freight trains. The government procured land for tracks and tunnels, but as the Pacific War raged on, plans for the dangan ressha were abandoned. Decades later, the project’s unfinished tunnels and partially-constructed route were incorporated into the Tōkaidō Shinkansen.

Inspiration for the World’s High-Speed Trains

When plans for the shinkansen began to materialize in 1957, many opposed it, pointing to railway’s waning stature in the United States. From the time it began operating in 1964, however, the Tōkaidō Shinkansen steadily grew into a passenger favorite. By 1970, in an effort to boost its transportation capacity leading up to the World Expo to be held in Osaka that year, the line increased the number of trains in service to 16.

Following the unveiling of the Tōkaidō line, the San’yō Shinkansen began operating between Osaka and Okayama in 1972 and was extended to Hakata in 1975. During this period, efforts were made to improve service on the trains, including the introduction of dining cars. In urban areas, meanwhile, issues of noise and vibrations caused by passing trains, as well as wear and tear on tracks, arose as problems. Between 1974 and 1982, half-day service stoppages were periodically implemented to carry out inspections and overhauls of tracks to keep the shinkansen running smoothly. Residents living along tracks took their grievances over sound and vibrations to court, reaching an agreement with Japan National Railway in 1986 that led to the construction of barriers to reduce noise pollution, improved train design, and other measures.

Despite facing various difficulties over the years, the shinkansen has been a resounding success on all fronts, including passenger safety and business operations. The train’s outstanding track record has served to spur the development of similar technology around the world, specifically in Europe—as seen by France’s TGV, which began running in 1981, the introduction of Germany’s Inter-City Express in 1991, and other high-speed lines on the continent. In particular, the TGV, which debuted with a top speed of 270 km/h that dwarfed the shinkansen’s 210 km/h, reestablished France as the leader in high-speed train technology. Japan, not to be left behind, has diligently worked to increase train speeds, with the Tōhoku Shinkansen now capable of matching the TGV’s top speed of 320 km/h.

With an eye to building still faster trains, Japan has since 1962 been involved in developing a linear motor railway system utilizing superconducting magnetic levitation technology. In 1997, piloted tests of a maglev train succeeded in reaching 531 km/h. JR Central has unveiled plans to roll out the technology on its Chūō Shinkansen line, which is slated to begin service between Tokyo and Nagoya in 2027 and will feature a top speed of 505 km/h.

In recent years, the JR companies operating the various shinkansen lines have begun efforts to export system technology behind the high-speed trains. As part of this campaign, the companies have focused specifically on the bullet train’s impeccable ability to run on schedule and its unsurpassed safety record (in 50 years, there has never been a fatal derailment or collision).

Bullet train technology is already being put to use outside of Japan, including the construction of specialized tracks that are separate from existing train lines, centralized control systems for lines, and ATC, or Automatic Train Control, mechanisms to slow trains in case of emergencies. An example of this technology sharing can be seen in Taiwan’s high-speed service, also known as the Taiwan Shinkansen, which began service in 2007. Originally designed using European expertise, operators of the line turned to Japan’s ATC and other technologies, pointing to several derailments by ICE trains and a large earthquake that had struck the island. China as well, which introduced a high-speed line in 2007, designed carriages based in part on shinkansen cars. While no country has wholly imported Japan’s high-speed train system, a growing number of countries, such as the United States and India, have shown keen interest in developing their own lines using shinkansen technology.

The Past and Future of Japan’s Shinkansen 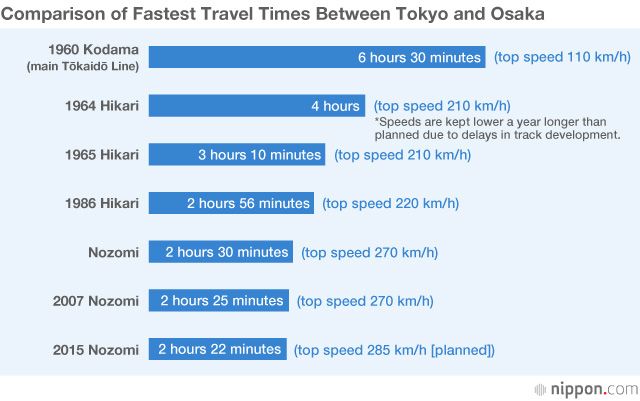