A Look at International Marriage in Japan

Society Feb 19, 2015
The number of international marriages in Japan rose rapidly in the 1980s and 1990s, peaking at over 40,000 in 2006. Since then, the number has been decreasing, and now averages around 20,000 per year. Despite this decline, interest in international marriage remains strong in Japan, as reflected in popular books and TV programs.

According to statistics from the Ministry of Health, Labor, and Welfare, 21,488 of the 660,613 marriages registered in Japan in 2013 were between a Japanese and foreign national. This works out to be 1 in every 30 newlywed couples. Although international marriages remain a small fraction of overall figures, such unions did increase significantly during the past half century. In 1965, there were only 4,156 international marriages, but the number rose steadily in the following decades, climbing to 20,000 by the late 1980s and then to 30,000 in 1999. The number peaked at 44,701 in 2006 and has fallen dramatically in the ensuing years, tumbling by nearly half to the level of around 20,000 in 2011. While the pace of decline has slowed, the trend remains gradually downward. 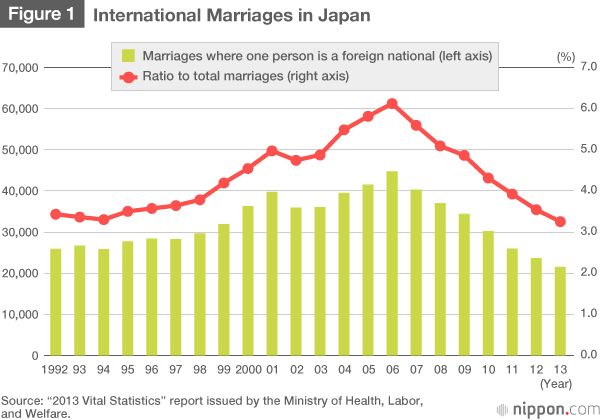 The drop in international unions from 6.11% of all marriages in 2006 to 3.25% in 2013 cannot be attributed solely to an overall decline in the number of people marrying. While annual marriage figures have trended down over the last decade, after peaking in 2006 at 730,971, they did in fact see a slight uptick in 2008 prior to decreasing again.

The Impact of New Immigration Rules

Changes made to the Immigration Control Act in 2005 have been pointed to as a prime cause for the decline in international marriages. The revisions were introduced to improve public safety by tightening requirements for certain types of visas. This has made it harder for Filipino women, who account for a significant percentage of foreign spouses, to obtain entertainment visas allowing them to live and work in the country. The resulting decline in Philippine nationals coming to Japan to work has limited opportunities for Japanese men to meet potential marriage partners, pushing down overall figures for international unions. 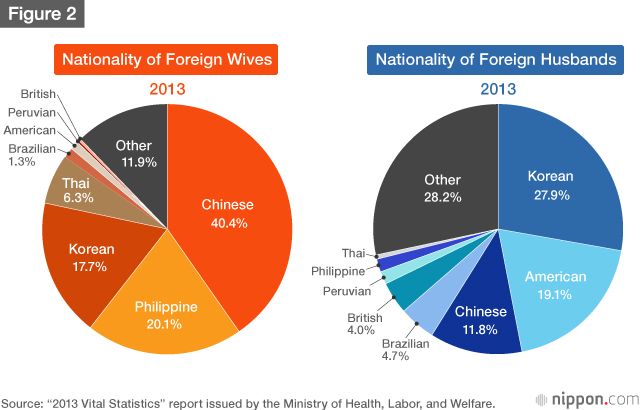 According to the health ministry statistics, there were 5,771 marriages in 1992 between Japanese men and Filipino women. In 2006 this number grew to 12,150, but began declining steadily following the revision of the immigration law, dropping to 3,118 in 2013. Another factor affecting figures for international unions is the increased efforts by the government to crack down on fake marriages involving Chinese women. 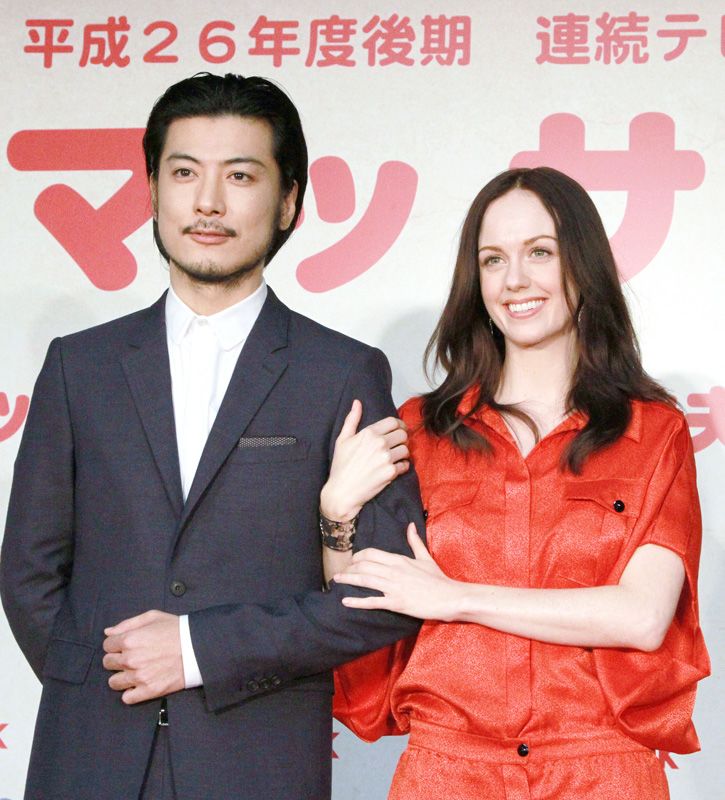 There continues to be strong interest among Japanese in the topic of international marriage. An abundance of Internet sites exist to help potential suitors find foreign spouses. And there have also been TV programs regularly aired that focus on the lives of international couples. Japan’s public broadcasting company, NHK, is currently running a morning TV drama titled Massan that tells the story of a Japanese-Scottish couple’s efforts to establish a whisky distillery in Japan. The story is based on the lives of Nikka Whisky founder Taketsuru Masataka and his Scottish wife Rita. At the end of each episode, a photograph appears on screen featuring an international couple under the heading: “Happily Married International Couples.” Books featuring Japanese married to foreign spouses, such as Wade Mika’s My Sweet Husband is British, have also become much sought after items, with publishers releasing new works regularly.

In 2013, there were 15,442 international marriages involving a foreign bride, compared to 6,046 where the groom was non-Japanese. A large number of the foreign women wedding Japanese nationals were from neighboring Asian countries. Chinese were the overwhelming majority of marriage partners at 6,253, or 40.4% of all female spouses; Filipino women were second with 3,118 brides, followed by 2,734 Korean spouses.

Koreans were the most popular marriage partners for Japanese women, with 1,689 unions, or 27.9% of all male spouses. American men were second, at 1,158, followed by 718 Chinese spouses. The high percentage of Korean nationals as marriage partners is due in part to the large number of ethnic Koreans, who were born in Japan but retain South or North Korean citizenship. The data also shows that Japanese women have a stronger tendency than their male counterparts to marry partners from the United States or European countries.