Politics Society Culture Lifestyle Dec 1, 2015
On December 1, the publisher Jiyū Kokumin Sha announced its list of the top 10 words or phrases for its annual “Word of the Year” prize. The grand-prize winners this year came from the realms of baseball and the tourism industry, rather than politics, which had provided many of the 50 nominees released last month.

No Grand Prize for Politics

On Tuesday, December 1, Jiyū Kokumin Sha’s “Word of the Year” prize for 2015 was awarded to two phrases from the long list of 50 nominees announced in November. 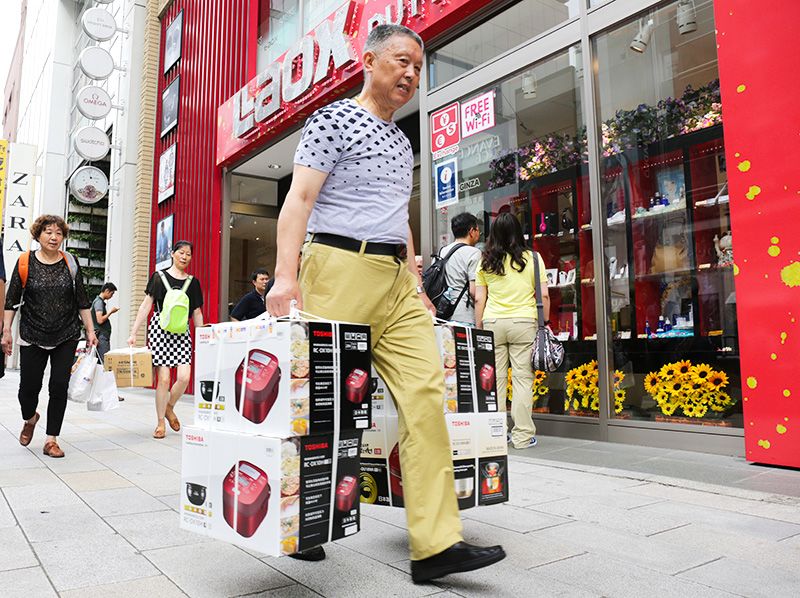 Rice cookers and other appliances are popular picks for Chinese tourists on bakugai shopping binges. (© Jiji)

Bakugai, or “explosive purchasing” by Chinese and other high-spending tourists, has been a blessing for Japanese retailers, who have watched their domestic business struggle in recent years. High-traffic destinations like Tokyo, Osaka, and Fukuoka have seen their retail outlets—especially department stores, electronics shops, and drug stores—rolling out the red carpet for these big-spending visitors, with consumption tax rebates and multilingual staff to encourage them to leave more of their money behind. Accepting the award on behalf of this term was CEO Luo Yiwen of the electronics retail chain Laox, which counts on foreign visitors for well more than half of its sales. 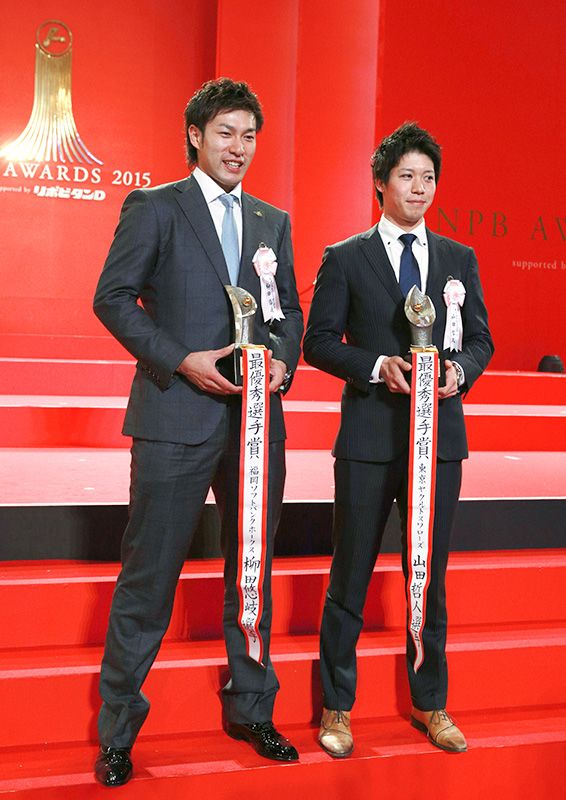 Also winning top honors this year was toripuru surī, the “triple three” achieved by two Japanese pro baseball players this season. Yanagita Yūki of the Fukuoka Softbank Hawks and Yamada Tetsuto of the Tokyo Yakult Swallows, both on hand for the award ceremony, were all-around offensive threats in 2015, hitting for .300 or better and racking up at least 30 home runs and 30 stolen bases. They were just the ninth and tenth players to achieve this in the history of pro baseball in Japan, and 2015 was the first year since 1950 to see two sluggers join the list.

The top 10 list was rounded out by several more from the sports world, including Gorōmaru pōzu, the famous pose struck by rugby player Gorōmaru Ayumu before taking kicks in the national team’s surprisingly successful outing in this year’s World Cup. Also prominent on the list were terms from the political realm, including Abe seiji o yurusanai (“no forgiveness for Abe’s government”) and Shīruzu (the youthful protestor group SEALDs), pointing to the turmoil surrounding the Abe Shinzō administration’s championing of a package of security bills extending Japan’s military capabilities.

The journalist Torigoe Shuntarō, who headed the selection committee, noted in his comments that fully 15 out of this year’s 50 nominees had sprung from the political scene, indicating its strong position in the national consciousness in 2015. In comparison with other years, he noted that this year’s crop featured few potential winners from the entertainment world.

Other selection committee members also noted the strong political flavor of this year’s list. Kang Sang-jung, professor emeritus at the University of Tokyo, remarked that 2015’s nominees included comparatively few lighthearted gags, instead skewing to straightforward, even pointed, expressions. Several committee members, including the actress Muroi Shigeru and the ad creator Yanai Michihiko, noted their preference for amusing wordplay over a steady stream of political and protest terms.

In the end, though, while 2015’s list was unusual for its sheer number of politics-related nominees, as the writer and poet Tawara Machi commented, “This is just the way that the year 2015 will be remembered.”

トリプルスリー  — Toripuru surī. In 2015, both Yamada Tetsuto of the Tokyo Yakult Swallows and Yanagita Yuki of the Fukuoka SoftBank Hawks achieved the “triple three” of a batting average of .300 or higher and at least 30 home runs and stolen bases in one season. 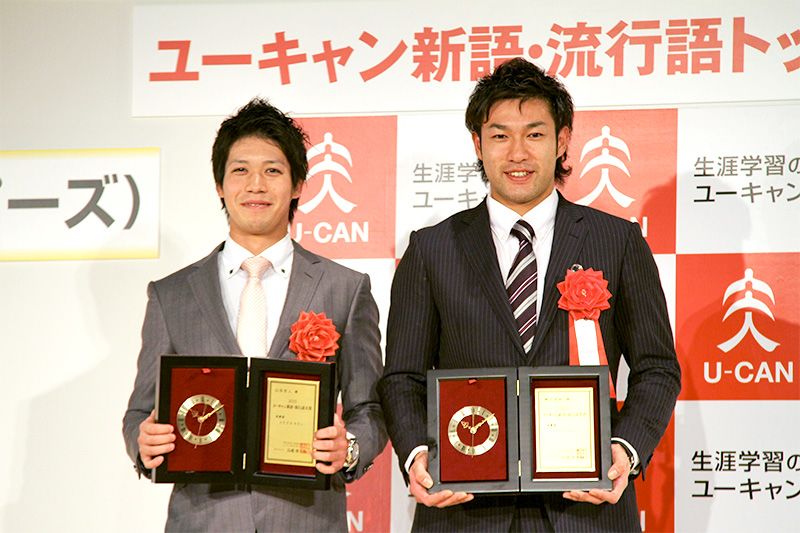 Yamada (left) and Yanagita accept the prize on behalf of the term toripuru surī.

爆買い  — Bakugai. “Explosive buying” by burgeoning numbers of Chinese tourists in Japan has buoyed the retail sector. Drug stores, electronics shops, and department stores have come to rely increasingly on this spending to improve their bottom lines. 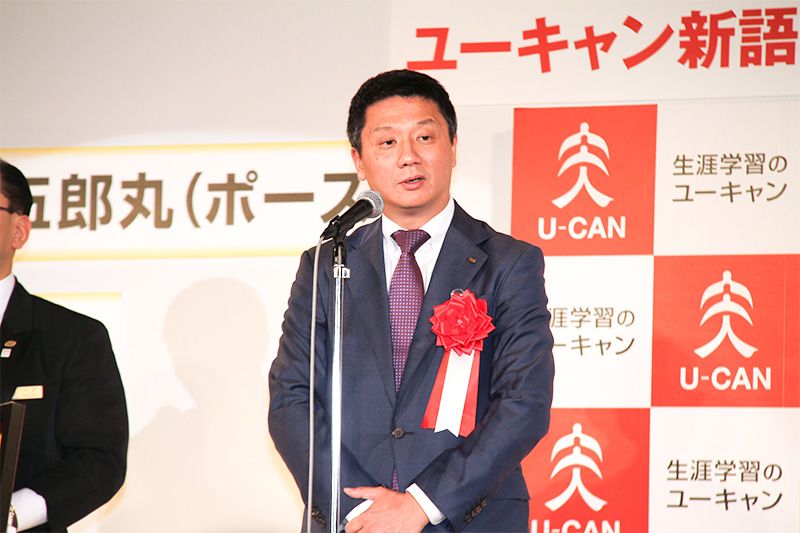 アベ政治を許さない — Abe seiji o yurusanai. There was “no forgiving Abe’s government,” according to the many protestors who gathered in central Tokyo on a weekly basis to march against the security bills and urge legislators to protect the war-renouncing Article 9 of Japan’s Constitution. 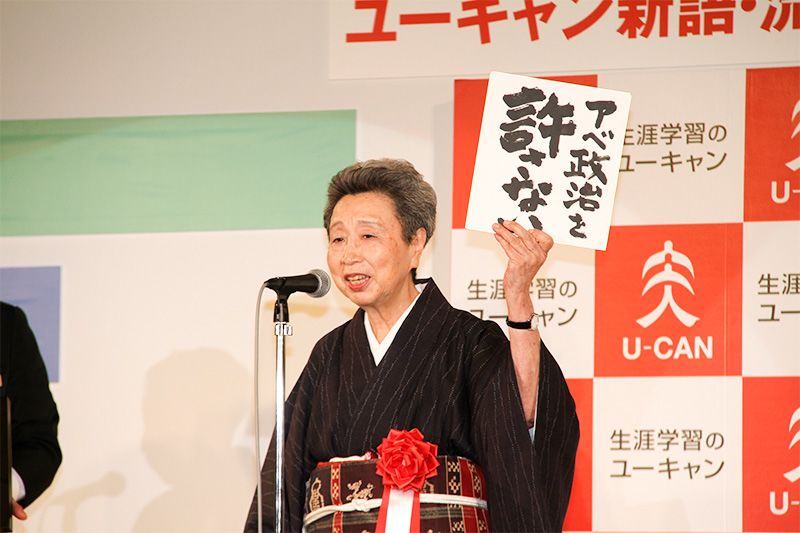 The author and pacifist protestor Sawachi Hisae, who created the anti-Abe slogan, accepts the award for it.

安心してください（穿いてますよ） — Anshin shite kudasai (haitemasu yo). As Tonikaku Akarui Yasumura translates his own popular catchphrase into English in a video where he strikes numerous poses seemingly in the nude, “Don’t worry, I’m wearing.” Yes, he does have underpants on.

Don't worry. Tonikaku Akarui Yasumura was, indeed, wearing his underwear at the ceremony.

1億総活躍社会 — Ichioku sōkatsuyaku shakai. A new slogan adopted by Prime Minister Abe Shinzō pictured an ideal Japan as a “society in which 100 million people can be active,” but drew criticism for calling to mind wartime propaganda that also used the “100 million people” phrase.

エンブレム — Enburemu. The logo or “emblem” for the 2020 Tokyo Olympics and Paralympics, created by designer Sano Kenjirō, was scrapped on September 1 following accusations that he had plagiarized the logo for a Belgian theater company. 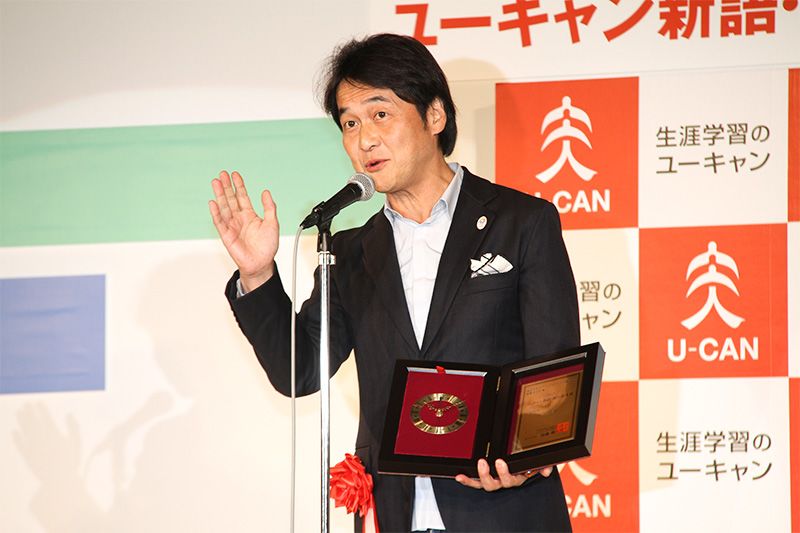 Natsuno Takeshi, a member of the Olympic emblem selection committee, accepting the award for enburemu.

五郎丸ポーズ — Gorōmaru pōzu. Gorōmaru Ayumu was one of the stars of Japan’s impressive showing at the 2015 Rugby World Cup, scoring 24 points in a historic victory against South Africa. The fullback’s stance before kicking, with his hands together and both index fingers pointing upward, became famous as the “Gorōmaru pose.”

シールズ — SEALDs. The Students Emergency Action for Liberal Democracy describes itself as “a platform of emergency actions by students to protect a free and democratic Japan.” Members of this group were key organizers of the series of protests against the security bills passed by the Diet in September. 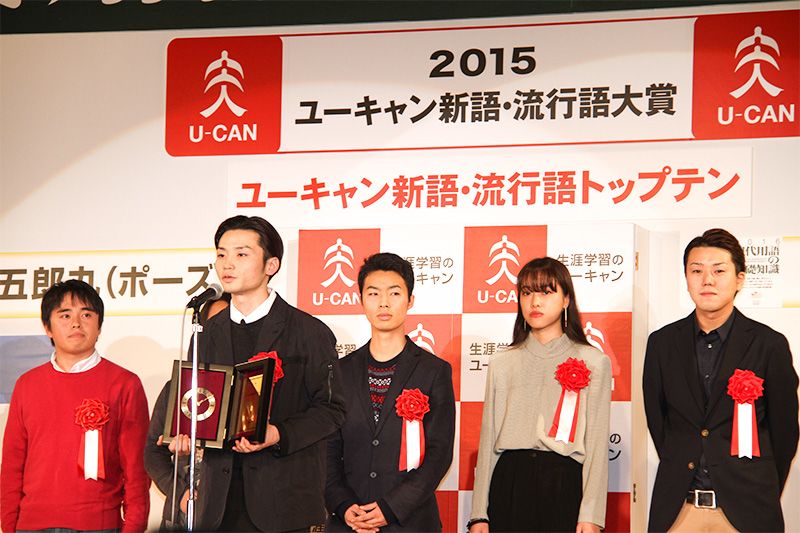 SEALDs leader Okuda Aki, holding plaque, and other members accept the prize for their group's name.

ドローン — Dorōn. In April a "drone" was discovered on the roof of the prime minister’s residence, having been flown there by a protester against nuclear power. Signs banning drones are now a common sight in the parks of Tokyo. 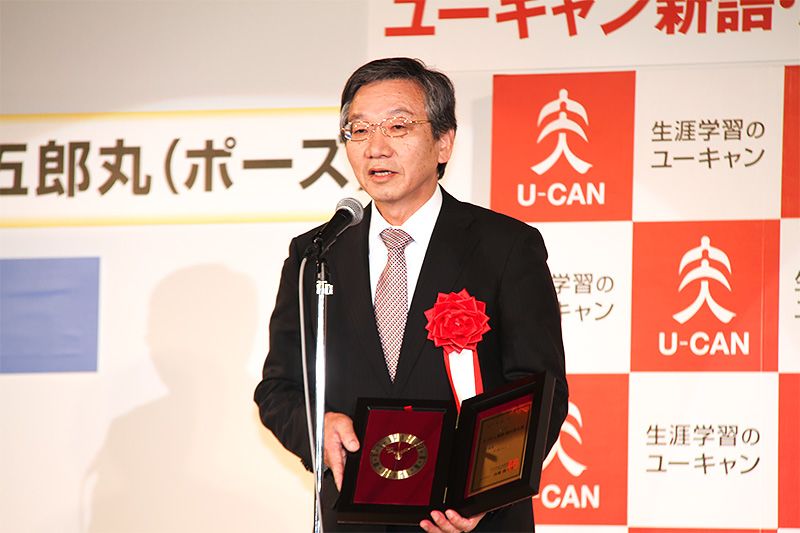 まいにち、修造！ — Mainichi, Shūzō! Former tennis player Matsuoka Shūzō has gained fame since leaving the sport for his high-energy encouragement of fans and TV viewers. In this book, which became a mega-bestseller with a title meaning “Shūzō, Every Day,” he provides daily pick-me-ups for readers. 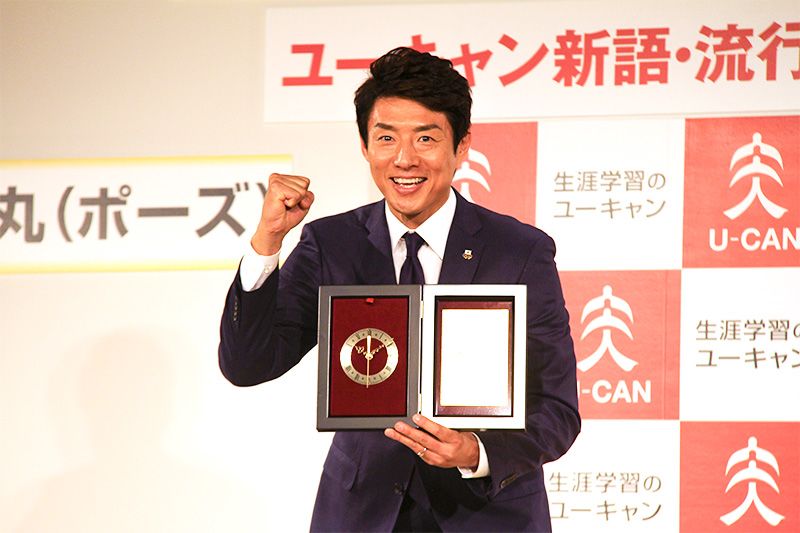 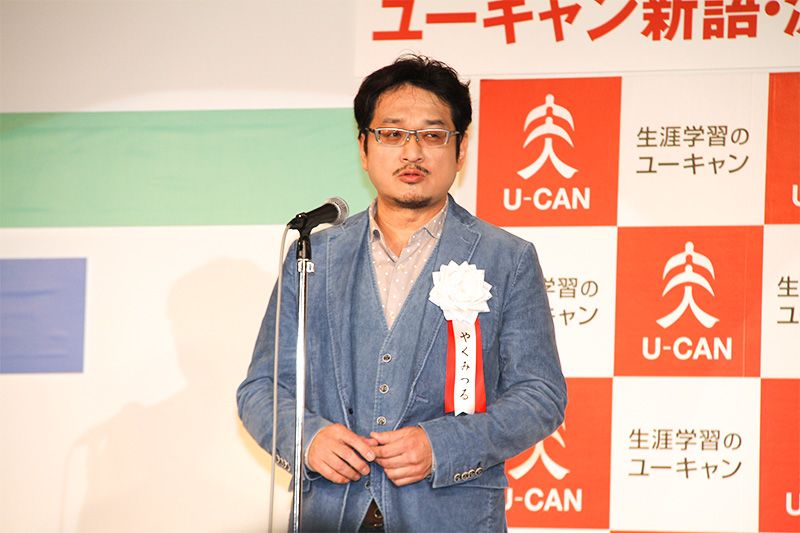 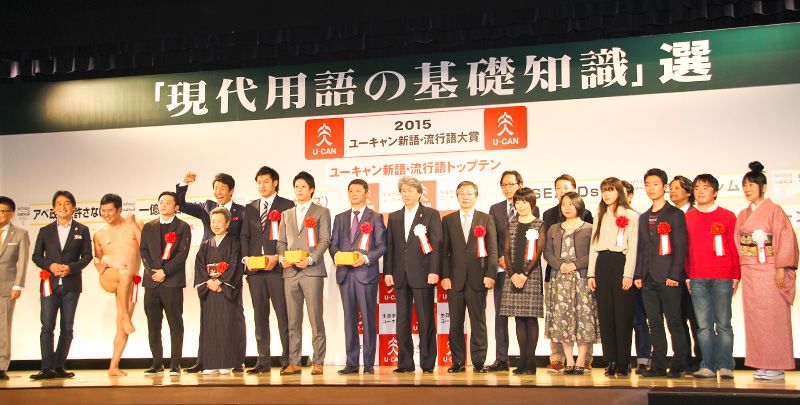 Representatives of the winning words for 2015 gather for a final group photo.

(Originally published in English on December 1, 2015. Banner photo: Yanagita Yūki and Yamada Tetsuto receive their MVP awards; a Chinese shopper walks with his purchases through the Ginza district. © Jiji.)