One in Four Visitors From China

According to the Japan Tourism Agency, a total of 19.7 million foreign visitors came to Japan in 2015, rising 47.1% from 2014 and setting a new record for a third consecutive year. This meant that for the first time since the nation hosted the 1970 World Expo in Osaka there were more international visitors to Japan than Japanese tourists going overseas. Foreign visitors also outspent the 16.2 million Japanese who ventured abroad, creating a record ¥1 trillion surplus in travel spending during the January–November period.

Tourism Minister Ishii Keiichi lauded the increase, pointing out that it encompassed a balanced mix from different countries. Asia, however, accounted for the vast majority of visitors at 82.9%, with 71.9% or 14.2 million from East Asia alone. China provided 25.3% of all visitors, South Korea 20.3%, Taiwan 18.6%, and Hong Kong 7.7%. These were followed by the United States in fifth place (5.2%) as the highest-ranking country outside the region. 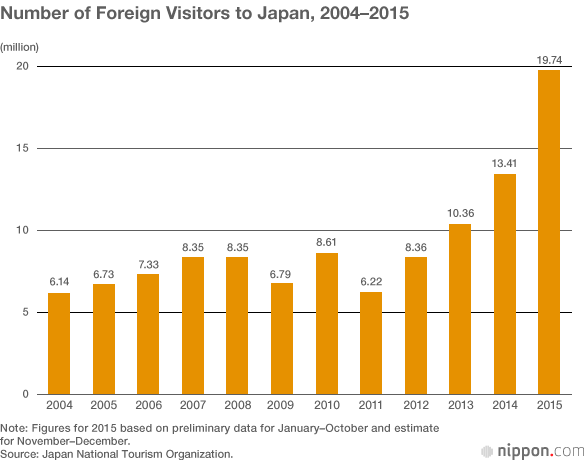 Foreign Visitors to Japan in 2015

Compiled by Nippon.com based on data from the Japan National Tourism Organization.

Spending by foreign tourists in Japan rose a whopping 71.5% to ¥3.5 trillion in 2015. As the business daily Nihon Keizai Shimbun (Nikkei) noted, “Tourism is now supporting the Japanese economy at a scale comparable to exports of semiconductors and other electronic components (¥3.6 trillion) and automobile components (¥3.4 trillion).”

The JTA cited the weakness of the yen, eased visa restrictions, and increased demand for overseas travel in growing Asian economies as the main reasons for the continued rise in the number of foreign tourists. The expansion of tax-free shopping for electronic goods and clothes to include daily items as well as food and drink has also played a part.

Improved Sino-Japanese relations have been of equal significance. November 2014 saw a first formal meeting between the nations’ leaders in over two years, while events marking the seventieth anniversary of the end of World War II—including the Abe Statement in August 2015—passed without flare-ups of ongoing disputes that would have put a damper on Chinese tourism to Japan.

The increase of visitors boosts Japan’s ranking in the list of the world’s most visited tourist destinations from twenty-second in 2014 to around fifteenth in 2015, as projected by the JTA. Having almost reached its goal of 20 million tourists by 2020, the government is now considering expanded tourism strategies and setting a higher target. 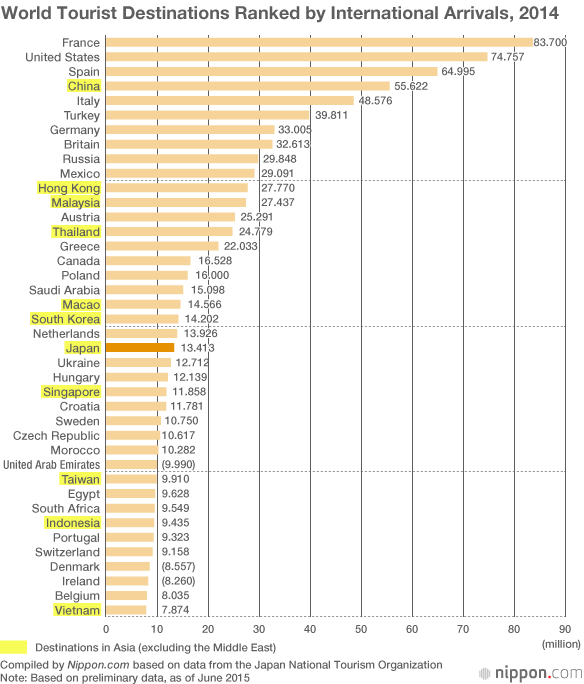 Tourism Minister Ishii has emphasized the importance of raising the quality of services for tourists. The Asahi Shimbun noted that “the strain is already showing from the rapid growth in numbers,” due to a shortage of hotels and staff able to converse in foreign languages. Major destinations like Tokyo and Osaka already suffer a conspicuous lack of accommodation and other amenities for foreign visitors.

As tourism booms, however, there is growing demand for policies that go beyond numerical targets. Some in the travel industry feel it would be best to focus on wealthy tourists, as the knock-on effects of big spending could contribute greatly to Japan’s overall growth. As such, they support enhancing Japan’s cultural appeal to attract economically influential super-rich visitors rather than only competing for relatively low-spending tour groups.

Given such factors as China’s economic slowdown, there is no guarantee 2016 will bring the same dramatic progress as 2015. Japan should, however, surpass the 20-million mark. And as it continues to reposition itself as a global tourist destination, taking advantage of its yet untapped tourism potential, it also looks set to exceed the 4% growth in international arrivals projected worldwide by the United Nations World Tourism Organization.

(Originally written in Japanese by Miki Takajirō of Nippon.com and published on January 26, 2016. Banner photo: Foreign tourists among the crowd outside the Imperial Palace in Tokyo on the Emperor’s Birthday on December 23, 2015.)