Culture Jul 19, 2016
The National Museum of Western Art in Tokyo has been recognized by UNESCO as the country’s latest World Heritage site, gaining the designation as part of an international collection of architectural works by Le Corbusier. It is the twentieth place in Japan to be added to the prestigious list.

On July 17, 2016, the World Heritage Committee of UNESCO announced the official registration of “The Architectural Work of Le Corbusier, an Outstanding Contribution to the Modern Movement” on its World Heritage list. The 17 locations across seven countries include one in Japan: the National Museum of Western Art in Tokyo.

The Convention Concerning the Protection of the World Cultural and Natural Heritage (better known as the World Heritage Convention), adopted at the 1972 General Conference of UNESCO, called for a list to be created of natural and cultural sites of “outstanding universal value.”

In December 1993, Japan’s first World Cultural Heritage sites were registered: the Buddhist Monuments in the Hōryūji Temple area (Nara) and Himeji-jō Castle (Hyōgo). The fifteenth such site was registered in 2015, with the recognition of Sites of Japan’s Meiji Industrial Revolution (spread across eight prefectures). The country’s first two World Natural Heritage sites were also recognized in December 1993: Yakushima (Kagoshima) and Shirakami-Sanchi (Aomori and Akita). These were followed by Shiretoko (Hokkaidō) and the Ogasawara Islands (Tokyo), bringing the total number of sites to four. 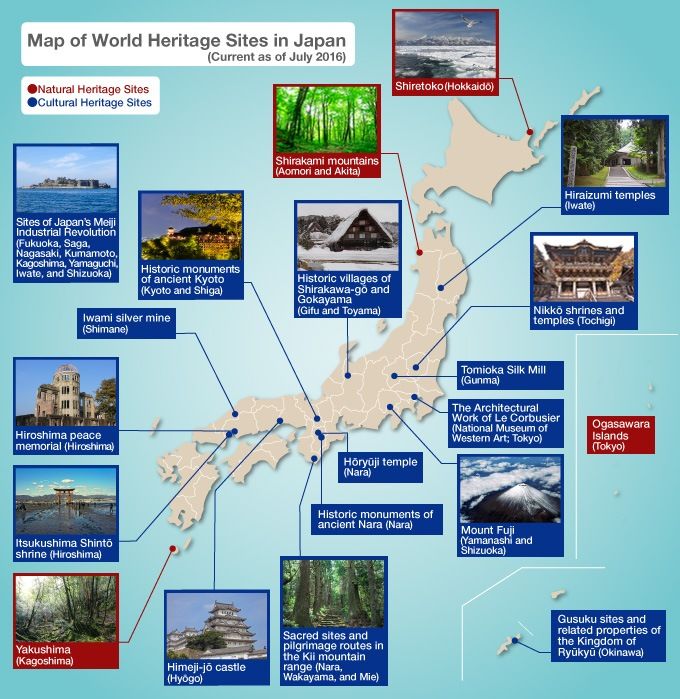 (Banner photo: The National Museum of Western Art, Tokyo, which was registered as a UNESCO World Heritage site as part of "The Architectural Work of Le Corbusier" on July 17, 2016. © Jiji; courtesy of the NMWA.)