Society May 10, 2018
Despite 24-hour monitoring of 50 of Japan’s 111 active volcanoes, the Japan Meteorological Agency still finds it hard to predict when any one of them may erupt.

Japan designates 111 of the many volcanoes that dot its islands as active volcanoes that have erupted within the last 10,000 years. Of this number, the Japan Meteorological Agency monitors 50 volcanoes around the clock and has classified 39 of them by alert levels on a scale of one to five.

As of May 1, 2018, five volcanoes are classified at level two, which restricts access to the volcano craters. They are Mount Kusatsu-Shirane in Gunma Prefecture, Mount Asama on the border between Gunma and Nagano Prefectures, Mount Iō in the Kirishima Mountains of Miyazaki Prefecture, and the volcanic islands of Kuchinoerabujima and Suwanosejima, both in Kagoshima Prefecture. There are two volcanoes—Mount Shinmoedake in the Kirishima Mountains and Sakurajima in Kagoshima Prefecture—currently at alert level three, which means they are not to be approached, while the remaining active volcanoes are at the lowest alert level one, indicating there is potential for increased activity. 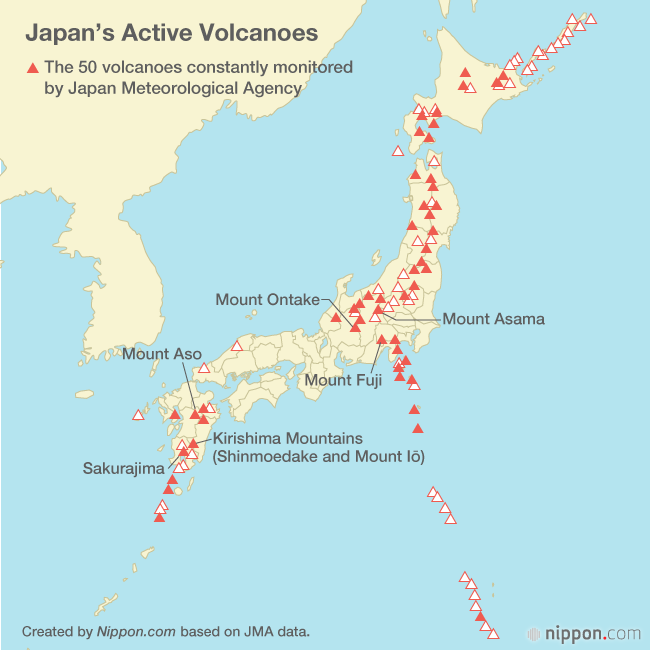 Following major eruptions in 2011, Shinmoedake in the Kirishima Mountains appeared to have quieted down, but signs of increased activity caused JMA to raise it to an alert level three in October 2017, and since March 2018 it has erupted several times. A large eruption on April 5 sent a plume of volcanic fumes up 8,000 meters. On April 19, Mount Iō, also in the Kirishima Mountains, erupted for the first time in 250 years.

Motoshirane, a peak on Mount Kusatsu-Shirane, erupted in January 2018, spewing stones that killed the leader of a Self Defense Force team on a ski training exercise and injured 11 others. Mount Kusatsu-Shirane has several craters, and while JMA has a camera monitoring one of the craters where there was once a phreatic explosion no one was paying attention to the Motoshirane peak, which had not erupted in 3,000 years and had the lowest alert warning of level one. Mount Ontake—on the border between Gifu and Nagano Prefectures—also had the lowest alert rating when it erupted in September 2014, leaving 58 people dead and 5 missing.

Forecasting the possibility of eruptions for different volcanoes is a difficult task. There is ample accumulated data on Sakurajima, for example, which erupts several hundred times every year, and fairly accurate forecasts can be made on the basis of readily recognized warning signs. On the other hand, there is little data for volcanoes that have not erupted in decades or hundreds of years, making it difficult to predict when an eruption may occur. Never assume a volcano is safe because it has not erupted in a long time or because it only has an alert rating of level one.