Japanese Drinkers Stick Near to Beer

Society Aug 3, 2018
Consumption of beer has been falling since it peaked in 1994. However, that gap in the market has been filled by similar drinks—happōshu low-malt beer and the “third beer” beer-flavored beverages. Beerlike beverages with a golden color, strong carbonation, and froth remain popular.

Toriaezu, bīru—“Let’s start with a round of beer!” This standard phrase, often spoken before anyone has a look at a restaurant menu, reflects the Japanese people’s love for beer. Whatever the occasion, it starts with a glass of beer, especially in the hot summer months.

This does not mean that beer is as popular as it has ever been, though. Regular beer consumption peaked in 1994 at 7,057,000 kiloliters. Consumption fell yearly after that; by 2009 it had reached the same level it had been in 1970. Even so, Japanese still love beerlike beverages. 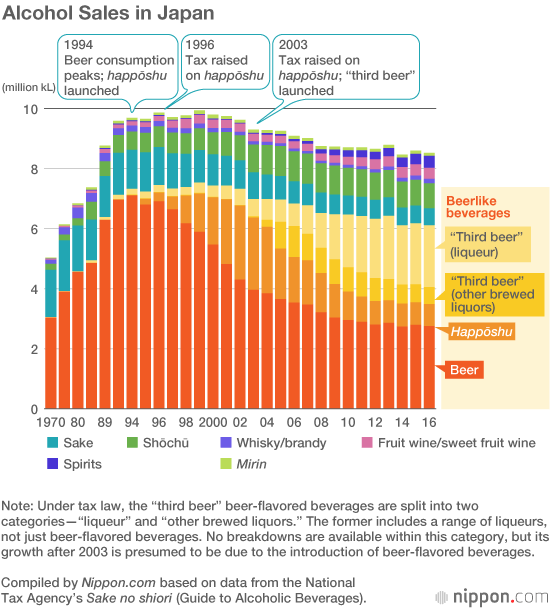 The first drop in regular beer consumption occurred when the low-malt beer called happōshu, literally “sparkling spirits,” was launched in 1994. The Liquor Tax Act defines beer as having a malt content of 67% or more, so Suntory developed a beerlike beverage using less malt, making it subject to a lower liquor tax than beer. With a taste and aroma close to beer, yet at a cheaper price, it was a huge hit with consumers and other brewing companies soon followed suit.

As a way to prevent products being created with the purposed of reducing tax, the Ministry of Finance reformed the Liquor Tax Act in 1996 so that happōshu with a malt content of more than 50% was the same tax rate as beer. However, brewing companies retaliated by introducing happōshu with a malt content of less than 25% to the market. They also developed new products with extra benefits like reduced calories, expanding this new market.

In 2003, when the happōshu market had reached its heyday, the Ministry of Finance raised taxes on the low-malt beverage for the second time. This time, Sapporo Breweries reacted by developing a beerlike product that used no malt whatsoever, and a new genre of beer-flavored beverages known as “third beers” was born.

The “third beers” are placed by the National Tax Agency in two categories—“other brewed liquors,” created by fermenting ingredients like peas and corn, and “liqueur,” where spirits are added to happōshu with a malt content of less than 50%. The tax rate on beer-flavored beverages is even lower than that for happōshu, so a 350 ml can costs around ¥100, about half the price of beer. This highly affordable drink can easily be enjoyed at home, and the market for this type of beverage has grown so much that it has surpassed the happōshu market.

Looking at trends for alcohol other than beer, the market for refined sake, seishu, has shrunk to a third of what it was in 1970. And although there is said to be a wine boom, the volume of wine sales, including all fruit wines, is only 360,000 kiloliters, not even 5% of all the alcohol category sales. It is clear that Japanese people overwhelmingly love beerlike beverages

Currently, the tax rate for a 350 ml can of a beerlike beverage is ¥77 on regular beer, ¥46.99 on low-malt beer, and ¥28 on beer-flavored beverages. In the 2017 tax reform proposal, it was decided that the tax rate on regular beer will be reduced in three phases, so that by 2026 the tax on all beerlike beverages will be unified at about ¥54. The definition of beer was amended to having a malt content of 50% or more and now fruit and spices can be used in the ingredients.

During the past two decades, brewing companies have repeatedly used gaps in the tax rates to develop new products, followed by the Ministry of Finance reforming liquor taxes. If the tax rate can be unified, the brewing companies will likely focus more on developing regular beer—good news for all beer lovers, who prefer the taste of the real thing. 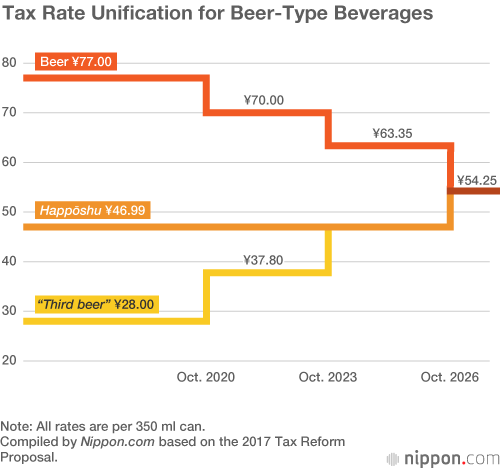