Year of the Boared? Japanese Tire of Greeting Card Tradition

Society Nov 20, 2018
The spread of mobile phones and popularity of social media have led to a decrease in the number of New Year’s cards (nengajō) sent in Japan. The cards marking the beginning of 2019 will probably be the lowest number on record.

As of November 1, 2018, Japan Post has issued 2.4 billion New Year’s cards (nengajō), a 7.2% decrease compared to the same day in 2017 (additional cards may be issued later in the year based on demand). The number of cards issued peaked in 2004 at 4.5 billion, but has steadily declined since then. With the spread of mobile phones, some people began to simply call and exchange New Year’s greetings, while more recently an increasing number of people forgo the card custom, making their greetings by social media instead. This New Year will be the last in the Heisei era, since the emperor will abdicate on April 30, 2019, after ruling since 1989. It is expected that the number of cards sent will be the lowest during his reign. 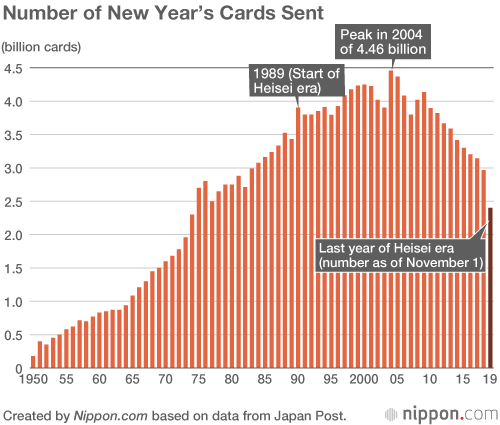 Japan’s modern postal system was introduced in 1871 as a government-run enterprise, and two years later the issuance of postcards began, which came to be used as an easy way to send greetings. According to a newspaper article published at the time, New Year’s postcards had become so popular by 1881 that postal employees were working all through the night to process them.

The custom of including lottery numbers on New Year’s cards was begun in the cards for 1950. The chance to win a prize, while hearing news from friends and relatives, seems to have provided a bit of joy during those years of postwar turmoil. The prizes first offered included sewing machines, wool clothing, children’s gloves, and umbrellas. The top prizes changed along with the changing times, upgrading to washing machines, televisions, microwaves, and trips to Hawaii. In 2014, a top cash prize of ¥10,000 was introduced for New Year’s cards, and for 2019 the top cash prize is ¥300,000, along with other prizes. Usually there is only one drawing for the lottery, but a second drawing will be held on April 20, 2019.

Every year the Japan Post’s New Year’s card has new playful design ideas. For 2019, the Year of the wild boar, there is a printed stamp with a boar climbing Mt. Fuji, and a postmark with a pine and bamboo motif designed to also look like the Chinese character for boar (亥); the same character is visible at the bottom of the card where the lottery number is printed. 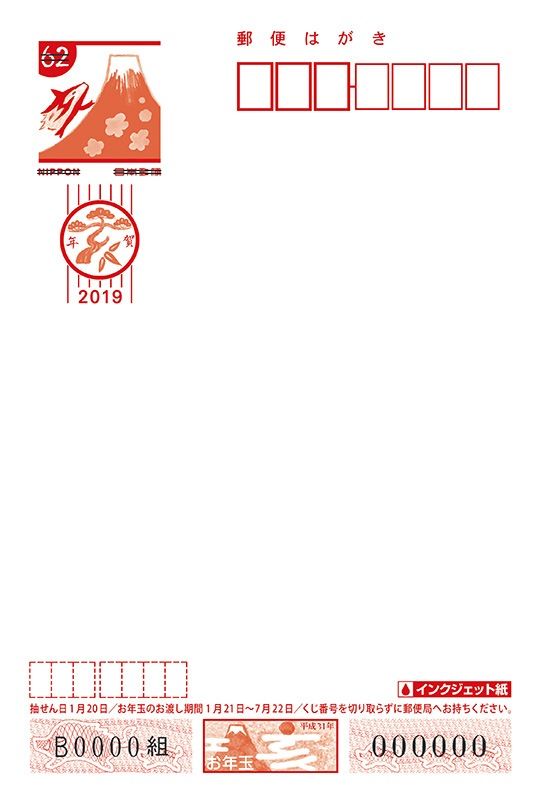