Economy Dec 26, 2018
Japan will surpass 30 million foreign visitors in 2018, setting yet another record as overseas travellers continue flocking to the country. Authorities hope momentum will keep building as they endeavour to reach the goal of welcoming 40 million overseas visitors a year by 2020.

On December 18, the number of overseas visitors to Japan in 2018 hit the 30-million mark for the first time ever. The Minister of Land, Infrastructure, Transport, and Tourism, Ishii Keiichi, attended a commemorative ceremony at Kansai International Airport marking the achievement. Authorities forecast that the figure will reach 31 million by the end of the year.

The number of visitors to Japan dropped to 6.21 million after the Great East Japan Earthquake and tsunami in 2011. Since then inbound tourism to Japan has continued to soar, with new flight services offered by low-cost airlines and promotions for traveling in Japan helping drive the influx of foreign visitors. In 2013, figures for overseas tourists passed the 10-million mark for the first time and have tripled in the subsequent five years. 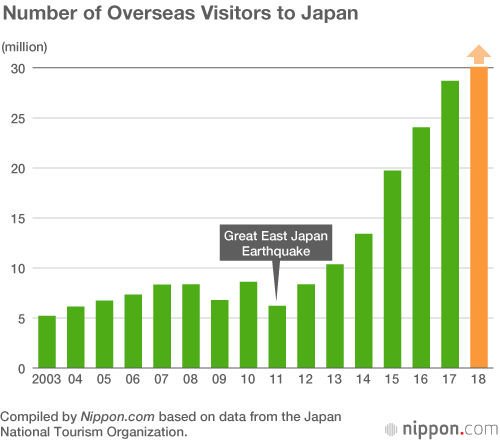 Visitor numbers in the period February to June 2018 grew by double digits compared to the previous year. However, the flow of visitors from East Asia, a driving force behind the rising numbers, slowed following a series of natural disasters, including an earthquake in Osaka on June 18, heavy rains in western Japan in late June through early July, and a strong tremor in Hokkaidō on September 6. September saw 2,159,600 visitors, a 5.3% decrease compared to the same period a year earlier and the first such decline since January 2013.

Visitor numbers quickly rebounded, though, and began to climb again as recovery progressed in effected areas. The cumulative totals for January to October show that visitors from Vietnam (330,000 people), Italy (129,000 people), Russia (79,000 people), and Spain (104,000 people) all increased from 2017 to new record highs. Visitors from China, which had temporarily dropped, also rose in October to surpass last year’s figure.

The government has set a goal of 40 million visitors by 2020, when the Tokyo Olympics and Paralympics will be held. 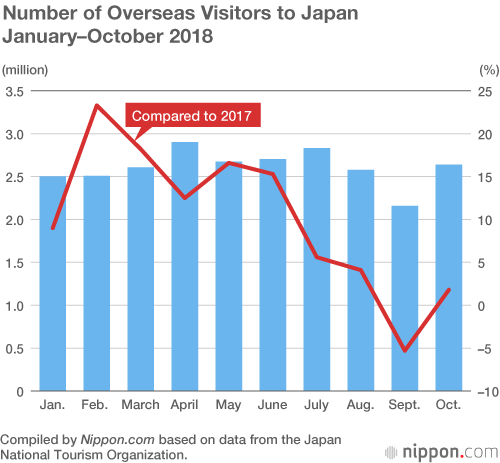