The first permanent maid café was established in 2001 in Tokyo’s Akihabara district, an area famous not only for electronics but also as a center of otaku culture. These meido kissa quickly became a regular aspect of the landscape of Akiba, as the district is casually known, and have since spread throughout Japan.

Maid cafés take their name from cosplaying waitresses clad in cute, and often provocative, maid costumes decorated with frills, ribbons, and other accessories. These establishments originally targeted otaku by looking to create real life renditions of the anime and manga worlds enjoyed by these diehard fans of Japan’s subculture.

The allure of maid cafés extends beyond young waitresses in maid costumes to include the distinctive service style of establishments. Servers fawn over patrons, addressing them as goshujinsama (master) and using exaggeratedly deferential language. Even first-time customers are greeted with a jovial “welcome back, sir” and pampered with attention. 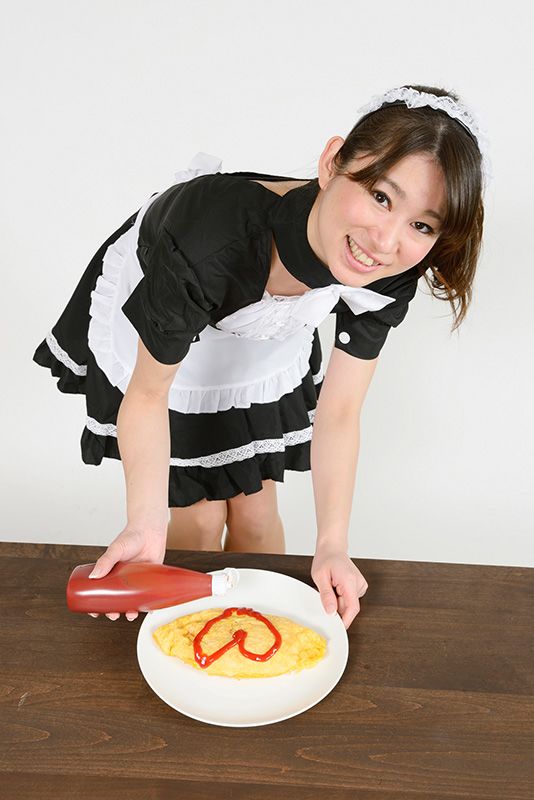 Special services, such as topping food with pictures drawn in ketchup, are part of the appeal.

Menus are similar to those at standard cafés, including coffee, tea, and other drinks, as well as light meals and desserts. However, waitresses do more than merely bring the customers their orders. They also provide entertaining services, such as chanting a cute phrase while drawing a picture in ketchup over a customer’s omelet or dramatically dribbling chocolate and syrup over a dessert. For an extra charge, some cafés allow patrons to pose with a waitress in an instant-print photo or engage in a playful game of rock-paper-scissors.

Maid cafés are not the exclusive province of male otaku—customers include women and couples as well, not to mention foreign tourists interested in the subculture. The shops have received wide coverage on Japanese television and in magazines and newspapers, helping to establish them as fun places to visit, either alone or with friends. The cafés continue to develop in response to changing trends, with new varieties catering to different customer niches.