Society Culture Oct 17, 2015
Practitioners of the traditional art of shodō use brush and ink to shape Japanese kanji and kana. Recently, the contemporary twist of performance in front of an audience has gained the calligraphic art new fans.

An Art with Chinese Roots

Shodō is a traditional Japanese form of calligraphy using brush and ink that, like the kanji it artistically recreates, has its roots in China. It shares similarities with Chinese calligraphy, but is characterized by the combination of characters with Japanese kana, which were developed in the ninth century. Shodō works are highly valued as art, but the practice also has its philosophical side, influenced by Zen Buddhism.

In Japan, there are both artistic and educational shodō groups. The largest artistic organization is Nitten, which holds the Japan Fine Arts Exhibition every year, displaying works by the public. There are many smaller regional and prefectural groups. At the same time, educational groups popularize Japanese calligraphy by offering certification exams.

Traditional Japanese education was based on reading, writing, and use of the abacus. In the Edo period (1603–1868), many Japanese children learned calligraphy at temple schools known as terakoya. During compulsory education today, too, children study shodō at elementary and junior high school, meaning that all Japanese people encounter the art at some point in their lives.

While many lay down the brush after leaving school, television programs and magazine articles are featuring an increasing number of young calligraphers. This new wave includes Kanazawa Shōko, a shodōka with Down syndrome whose talent has drawn major interest. Among her various achievements, her rendition of the characters 風神雷神—fūjin raijin, meaning the wind and thunder gods—in front of an audience at the temple of Kenchōji in Kamakura was highly praised. She later dedicated this work to the Kyoto temple Kenninji, which has a famous folding screen depicting the two gods that has been designated as a national treasure.

Shodō as performance is a popular method among young calligraphers, rather than exhibiting works after they are complete. Some practitioners have also gained fans for their pop idol looks. And thanks to popular manga, drama series, and hit movies focusing on shodō, Japanese calligraphy has been enjoying a quiet revival these past few years among both young and old. 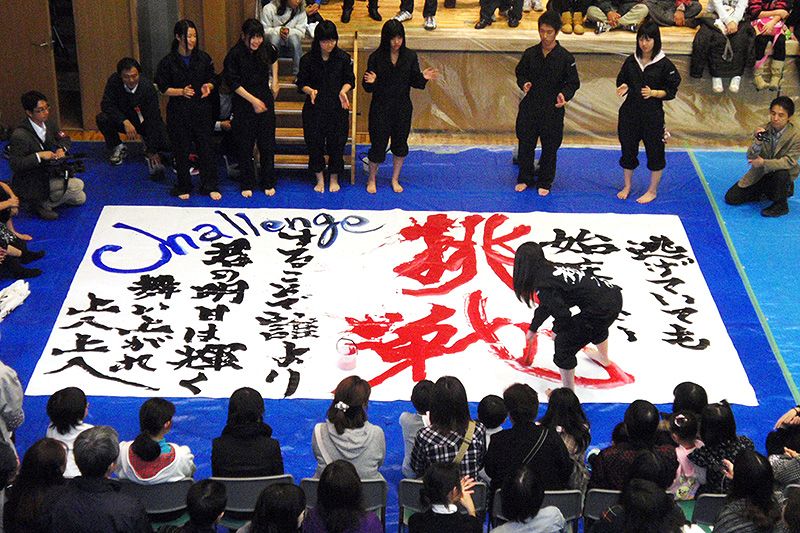 Many high school shodō club members dream of taking part in the National High School Performance Calligraphy Tournament, which attracts thousands of spectators. It is held each summer in Shikokuchūō, Ehime Prefecture, as part of the city’s paper festival.

Teams of around 10 students take turns to write on huge 4-by-6-meter sheets of paper. At the same time, they dance and clap to the rhythm of background music. This contemporary variation on a traditional art creates a spectacle full of vitality as the clubs battle to become high school shodō champions.