Society Culture Nov 28, 2015
Chopsticks are used throughout East and Southeast Asia to gobble down everything from extravagant meals to simple homemade fare. The utensils are an integral aspect of dining in Japan, with a variety of social rules guiding proper usage. While daunting to the uninitiated, hashi are versatile tools for someone with even basic handling skills.

A Utensil for Any Occasion

According to some estimates, around a third of the world’s population rely on chopsticks at mealtime. In skilled hands, these two straight sticks can perform many cooking and dining tasks, including scooping, grabbing, dividing, wrapping, pinching, plucking, and mixing.

In the world of washoku (traditional Japanese cuisine), chopsticks, or hashi, are considered the proper instruments for enjoying a meal, from soup to dessert. They are also utilized by chefs to produce the wide catalogue of dishes making up the tradition, which received UNESCO recognition as an Intangible Cultural Heritage in 2013. 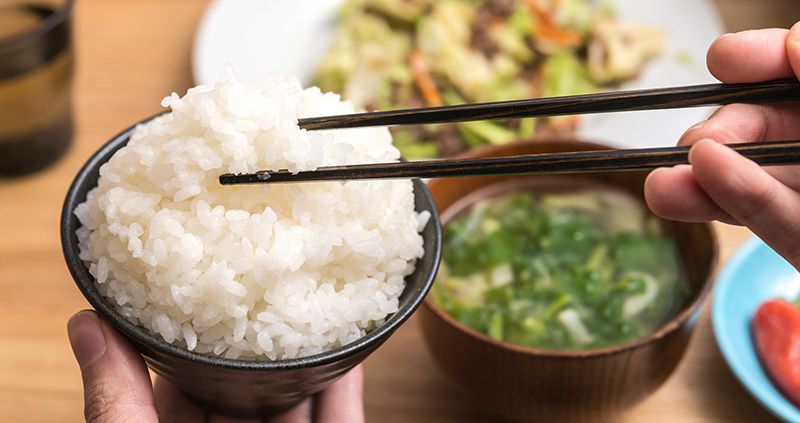 Around Asia, chopsticks are made from a variety of materials, including wood, metal, and plastic, with each country having differing preferences and traditions. In Japan, hashi, or more politely ohashi, are typically fashioned from wood or bamboo, which is then lacquered or treated with resin. Tastes in designs vary widely, with some people preferring plain types or simple patterns and others favoring more garish motifs. 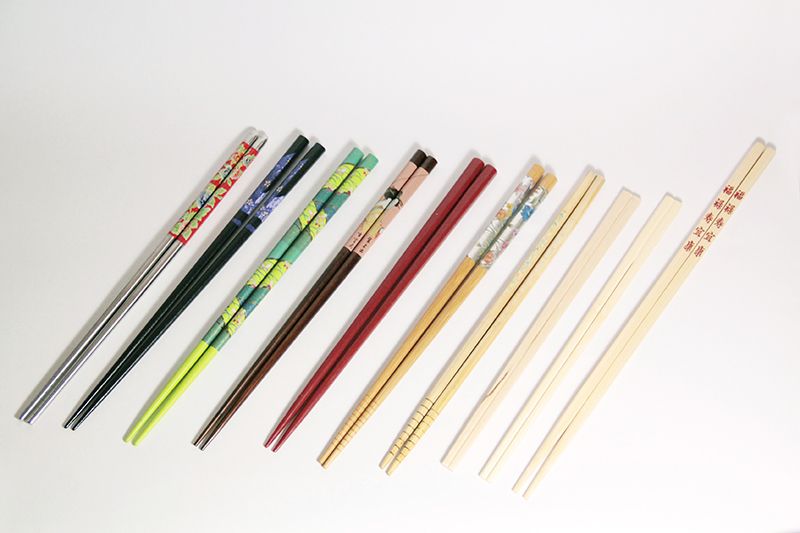 Chopsticks are made from materials including wood, bamboo, and metal.

Japanese chopsticks characteristically have a tapered design, with slightly thick backs and narrow tips. There are a broad variety of forms intended for different situations and occasions, including his-and-her meotobashi, decoratively enfolded iwaibashi used during New Year celebrations, modestly crafted rikyūbashi utilized in haute kaiseki cuisine, and disposable waribashi. There are even elongated kitchen chopsticks called saibashi, as well as specially designed training hashi for children. 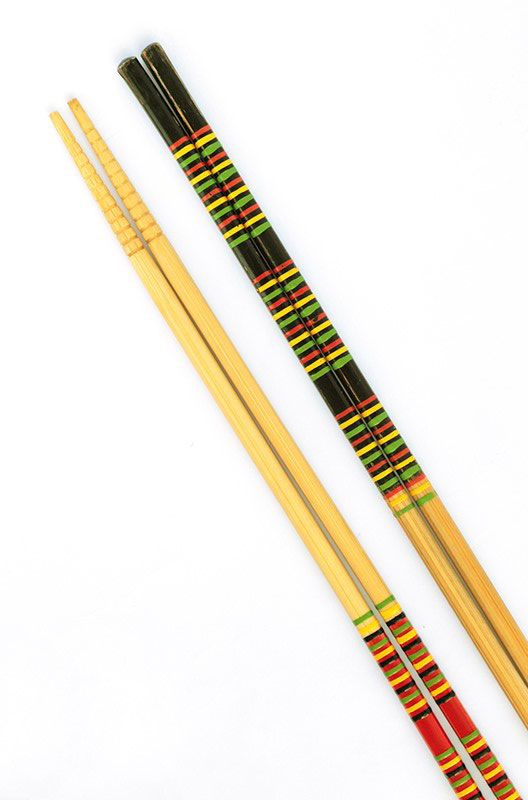 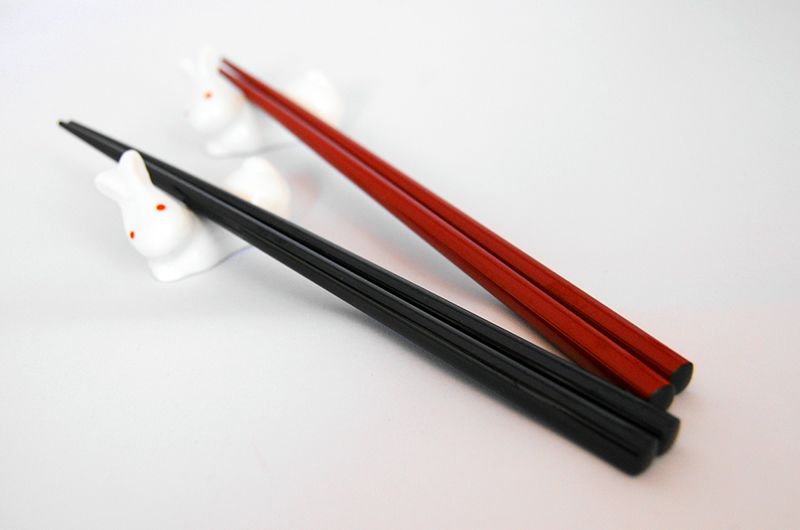 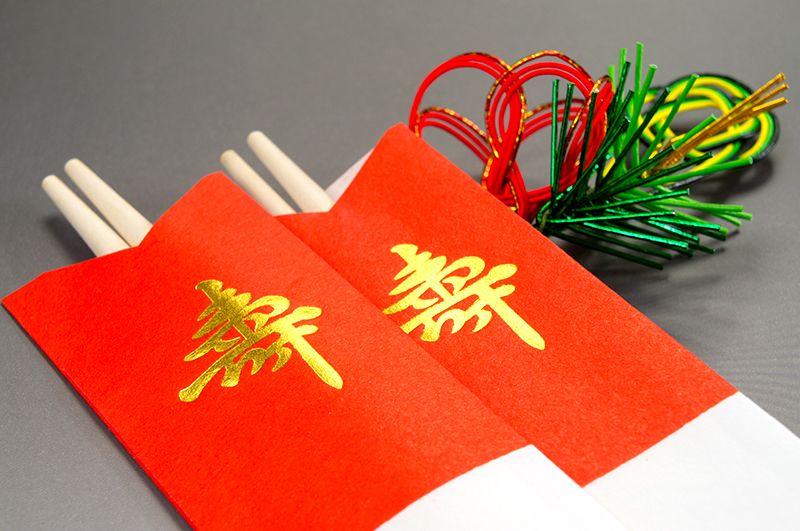 The ability to appropriately handle chopsticks is a highly touted trait in Japan and many bemoan what is seen as the gradual decline of proper hashi form. According to a 2010 survey by the Cabinet Office, only slightly more than half of Japanese over the age of 18 were deemed to be able to hold their chopsticks correctly.

The standard method of holding hashi is:

After becoming comfortable with grasping chopsticks, users can practice by picking up small items, such as shelled peanuts or beans. 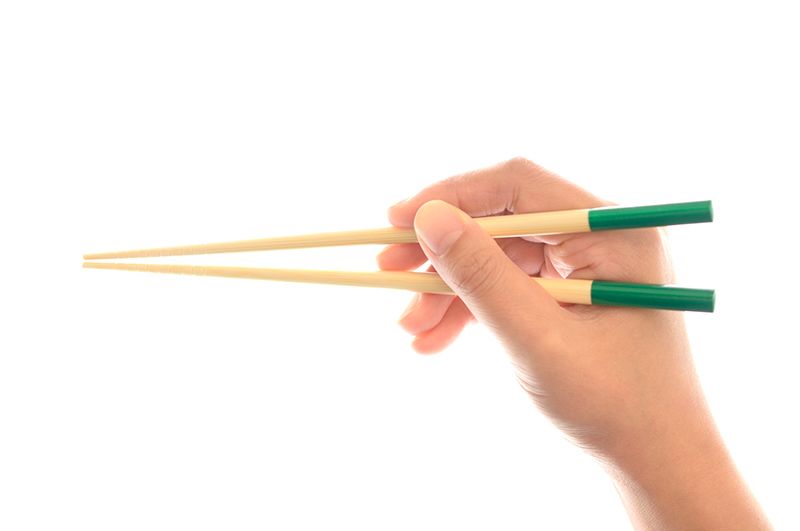 A waribashi holder at a restaurant.

Many restaurants provide patrons with disposable chopsticks made from wood or bamboo. Waribashi are typically attached only at one end to make them easy to separate, although some precut varieties are attached with a paper band. Convenience stores generally provide waribashi for bentō and other food items, as do supermarkets and takeout shops.

A set of travel chopsticks from Nihonbō in Hiroo, Tokyo. The design combines metal back ends and wood front ends.

Waribashi have been used at eateries in Japan since the Edo period (1603–1868). While convenient, the scale of use today has been the focus of criticism over the waste of natural resources, and health concerns have been raised from instances of imported raw materials having been treated with harmful chemicals. A recent approach addressing these issues which is gaining in popularity is manufacturing disposable chopsticks from scrap produced during lumber production and wood thinned out from tree farms. Some environmentally conscious diners have also begun a movement to use collapsible travel chopsticks at restaurants and other eateries in lieu of waribashi. The idea has slowly gained traction, with many stores now offering a wide selection of these compact and portable chopsticks, often with elegantly designed cases.

There is more to using chopsticks than proper grip, and diners need to keep in mind the diverse rules of hashi manners. When eating, food should be conveyed quickly from platter to dish, and allowing chopsticks to linger too long over cuisine is a breach of etiquette known as mayoibashi. Other faux pas include neburibashi, licking droplets of soy sauce off the end of chopsticks, and sashibashi, or spearing food. 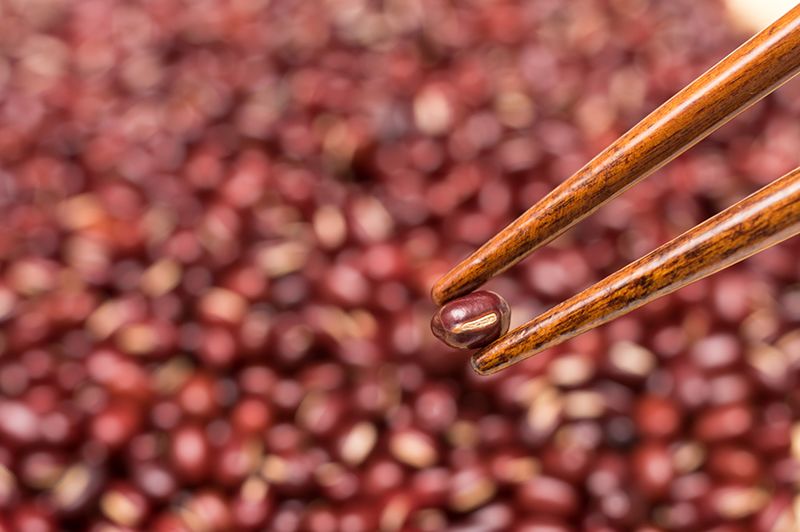 Picking up beans is a good way to hone hashi skills.

While slip-ups are tolerated, passing food directly from one chopstick to another represents a colossal blunder. This is because Japanese funerals include a ritual called hashiwatashi where the bones of a loved one are plucked from the cremated remains and relayed from one chopstick to the next by family members until being placed in the kotsutsubo (urn). Similarly, a pair of chopsticks stuck upright in a bowl of rice is an offering presented to the newly deceased, and recreating the scene, known as tatebashi, at the dinner table is frowned on as bringing bad luck.

Manners aside, chopsticks and Japanese cuisine go hand in hand. Learning to brandish a pair may take a little practice, but there is no better way to learn than by digging into a nice washoku meal.

(Banner photo: A bowl of tempura udon being eaten with chopsticks.)