Society Culture Jan 9, 2016; updated Jan 9, 2023
Japanese celebrate joining the adult world with seijinshiki, or coming-of-age ceremonies. Held on Coming of Age Day on the second Monday in January, young men and women dress in suits and kimonos to attend events held throughout the country.

Each year in January, young people gather at public halls, community centers, and other venues across the country to celebrate crossing the threshold into adulthood. The age of majority, when children legally join society as adults, was 20 in Japan for over a century, but this was lowered to 18 in April 2022.

While many local governments and public organizations host seijinshiki or coming-of-age ceremonies to honor the passage to adulthood, this is still commonly held at the age of 20, with invitations for all the young adults reaching the milestone during the concurrent school year, as the last year of high school is hectic with university examinations. Newly minted seijin, or adults, attend events dressed in formal attire and take part in programs that commonly include speeches by local officials and well-known community figures, a reception, and the presentation of mementos commemorating the occasion.

Ceremonies are customarily held on Seijin no hi, Coming of Age Day, a national holiday observed on the second Monday of the month. There is a degree of regional variation in attire and accouterments, but women typically attend in brightly designed, long-sleeved kimonos, girding themselves against the chilly January air with furry stoles. Men generally dress in suits or traditional haori jackets and hakama (loose, skirtlike trousers). While ceremonies usually take place at publicly run venues, some regional authorities near popular attractions like Tokyo Disneyland and Universal Studios Japan are known to stage events inside the theme parks.

The roots of the modern seijinshiki date back to the ancient genpukushiki of the Nara period (710–794), a rite marking a child’s transition, often around age 15, to adulthood. Depending on gender, social status, and other factors, participants would assume adult clothing and hairstyles, and in some instances a new name. Coming-of-age ceremonies, which in early times were observed largely by the elite class, have over the centuries grown to become an important social custom across society, changing and taking on different aspects with each successive era. 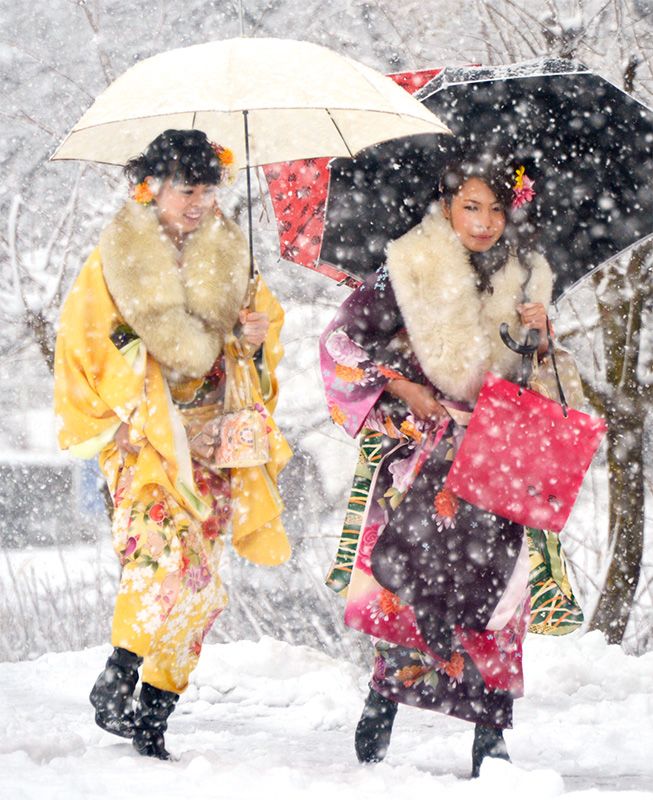 Women attending a seijinshiki in Tokyo in 2013 trudge through a blanket of snow. (© Jiji)

Seijinshiki take place at the height of winter. In colder regions, such as the northern island of Hokkaidō, snow adds a seasonal charm to ceremonies. But often an unexpected dusting of winter white becomes an unwelcome burden to attendees, many of whom are unaccustomed to moving around in traditional garb. The occurrence of snowy weather in lower latitudes is surprisingly common, with Tokyo and the surrounding Kantō area over the last 30 years experiencing snowy seijinshiki 13% of the time, or an average of roughly once a decade.

A Rite of Passage

While the age of adulthood in Japan was lowered to 18 in April 2022, some changes still do not come until the age of 20.

Turning 18 brings rights and responsibilities, such as being able to get married without parental permission or sign a contract for a smartphone or credit card. However, it is still necessary to wait until 20 to indulge in such mature pastimes as drinking alcohol, smoking, and gambling (except pachinko).

Incidentally, full participation in the nation’s democratic system came a little earlier, as the enactment of legislation in June 2015 lowered the voting age from 20 to 18. 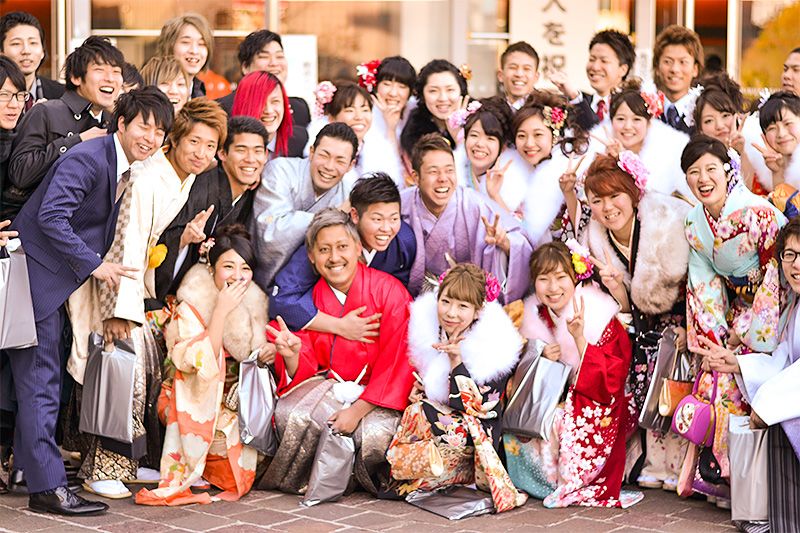 Men and women celebrate entering adulthood at a public hall in Shibuya, Tokyo, in 2015.

Even with the burden of adulthood looming ahead, those attending ceremonies tend to leave grownup concerns for another time and focus instead on making seijinshiki vibrant celebrations of youth.