“Omamori”: Lucky Amulets for All Occasions

Culture Jan 3, 2019
Omamori are amulets offered at Buddhist temples and Shintō shrines that are believed to protect or bring good fortune to carriers. People frequently start the New Year by buying a new charm.

Protective amulets called omamori are widely available at Buddhist temples and Shintō shrines. The charms are thought to ward off calamity and bring good fortune to the holder. Typically slips of paper or wood printed with religious symbols like the name of deities and shrines, mantras, and Sanskrit characters, omamori are displayed inside doorways or on the main beams of buildings or carried on one’s person.

Omamori are rooted in animistic Shintō belief that spirits or gods inhabited all objects. In ancient times stones, pieces of wood, and other items from nature were placed in dwellings or near settlements in the belief that the spirit inhabiting the object would ward off calamity. This practice was eventually adopted by shrines and temples, which began offering parishioners protective amulets housing the shrine deity or imbued with the power of a particular sutra or Buddhist image.

There are omamori for nearly all of life’s occasions, including those assuring health and longevity, success in studies and romantic relationships, safe childbirth and homelife, success in business, and protection from traffic accidents. Omamori are usually bought for personal use, but can also be offered as gifts, including to ill people in hopes they will recover or to students sitting for entrance exams.

Amulets come in a wide variety of designs, including pendants, wooden arrows, and small figurines. The most typical omamori is a small purse-like bag. Hatsumōde, the first visit to a shrine or temple in the New Year, is a popular time to purchase charms in hopes of assuring good fortune in the coming months. Parishioners can return old amulets at this time, which the shrine or temple then incinerates in a ceremony. 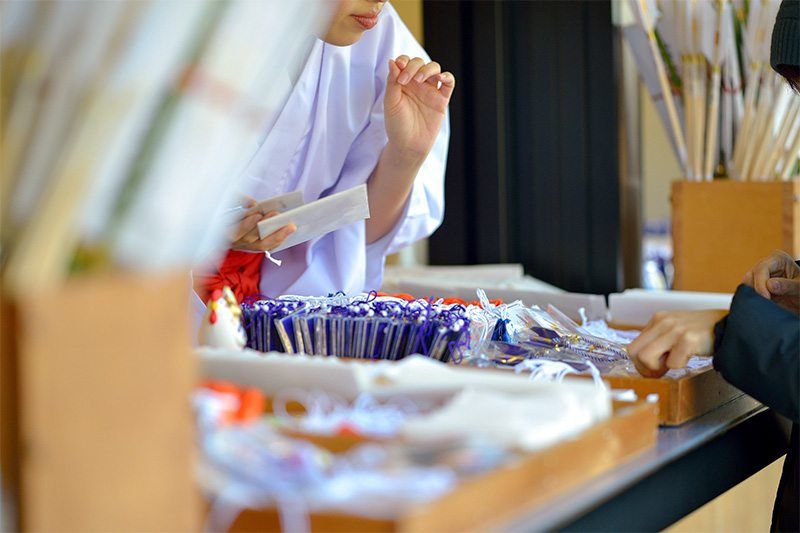 Certain temples and shrines offer omamori that are considered to have greater potency and are highly esteemed by certain groups of people. The ancient Mitsumine Shrine in the mountains of Chichibu in Saitama Prefecture is a renowned “power spot.” People from around the Kantō region visit the shrine to buy omamori imbued with the spirit of the site’s shinboku, or divine tree, that are thought to have special attributes. 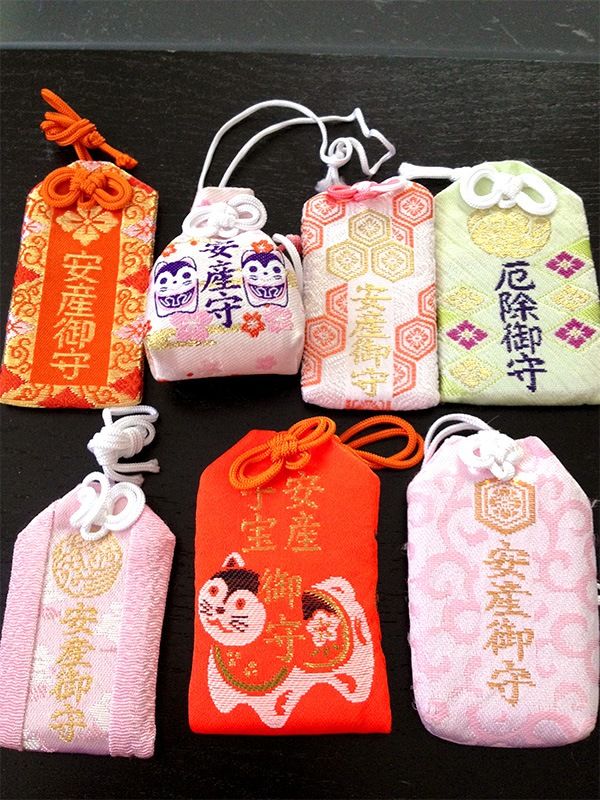 Tokyo’s Suitengū has long been associated with childbirth, and its omamori are popular with expectant mothers. Typically women in their fifth month of pregnancy visit the shrine on inu no hi, a day associated with the zodiac sign of the dog—dogs have large litters and are considered auspicious for childbearing— to offer a prayer and buy an amulet.

There are numerous shrines around Japan affiliated with ninth-century scholar Sugawara Michizane, who after his death was deified as a god of learning. Amulets from shrines like Fukuoka’s Dazaifu Tenmangū, Osaka's Kitano Tenmangū, and Tokyo’s Yushima-tenjin are popular with students, particularly in the runup to entrance exam season.

There are also sites for people looking for luck in love, like Kyoto’s Jishu Shrine and Tokyo’s Daijingū. The omamori of both spots are popular charms believed to protect relationships.