Culture Lifestyle Dec 2, 2013
On December 2, Jiyū Kokumin Sha announced its top 10 picks for "Word of the Year," along with an all-time high four winners. Read on to see what they are.

Previously on this blog we introduced the 50 terms selected by Jiyū Kokumin Sha as the "words of 2013." Today the company announced its top 10 picks, along with the winners for the year—four of them this year, the most ever selected by the company.

今でしょ — Ima desho. "Why not now?" is the answer that exam prep school teacher Hayashi Osamu provides to his own question, "When are you going to do it?" This catchphrase has made its way from commercials for Tōshin High School to the national lingo. Hayashi makes his appearance at about 0:20 of this Tōshin commercial:

お・も・て・な・し — O-mo-te-na-shi. The word omotenashi signifies a sense of warm hospitality. With the marks to separate its syllables, though, it calls to mind the presentation by Christel Takigawa at the International Olympic Committee session in Buenos Aires in early September, when Tokyo won the 2020 Olympics. Her drawn-out delivery of the word had much of Japan mimicking her in classrooms and offices for days to come. Here's her speech (in French, with Japanese simultaneous interpretation track):

じぇじぇじぇ — Jejeje. An interjection of surprise in the Iwate dialect of Japanese made popular on the NHK serialized morning drama Ama-chan (Little Diver). The 20-year-old actress Nōnen Rena greeted the news today with this very phrase, of course. This selection brought TV dramas back into the words-of-the-year lineup for the first time in 19 years, along with . . .

倍返し — Baigaeshi. "Pay them back double!" was the famous line delivered by TV drama character Hanzawa Naoki (actor Sakai Masato) in the wildly popular show of the same name.

The rest of the top 10 are as follows:

ご当地キャラ — Gotōchi kyara. These "local characters" are promotional mascots sent out to do public relations for their hometown. We visited a number of them late in 2012. 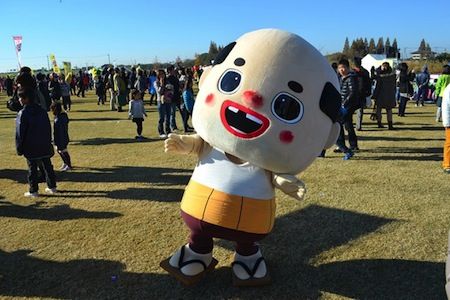 特定秘密保護法 — Tokutei himitsu hogo hō. The law to protect "specified secrets," or intelligence marked as not for public release. The Abe government is moving to enact a new secrecy law that would expand the scope of the secrecy definition, as well as the government's ability to extend the blackout period. Government claims that this is needed to tighten up Japan's information security are being met by anger from journalists who fear they will not be able to do their jobs as effectively. (These fears were not addressed well by LDP Secretary-General Ishiba Shigeru, who wrote on his blog on Friday that people engaged in vocal protests against this law are no better than terrorists. In a post today on his blog, he retracted this comment, while noting that only orderly demonstrations, which "don't inspire fear among the general public" or consist solely of "raucous shouting of the protestors' views," should be considered a proper part of democracy.)

ＰＭ２・５ — PM2.5 is particulate matter of a size smaller than 2.5 micrometers, particularly dangerous for its ability to penetrate deeply into the lung tissue. China wrestles with serious air pollution, particularly in the winter months, and Japan must deal with the PM2.5 pollution that blows over from the continent. (Japanese weather websites like Tenki.jp have pages set up to let users track the particulate matter.)

ブラック企業 — Burakku kigyō. These "black corporations" are employers noted for their poor treatment of employees. Lists of the blackest of the black are popular reading material among job-seekers who hope to avoid suffering bad work conditions for the sake of a regular paycheck.

ヘイトスピーチ— Heito supīchi. "Hate speech" became a buzzword following strident anti-Korean demonstrations that took part in heavily Korean districts of Tokyo early this year, and there is growing debate on the need for legislation to counter it.