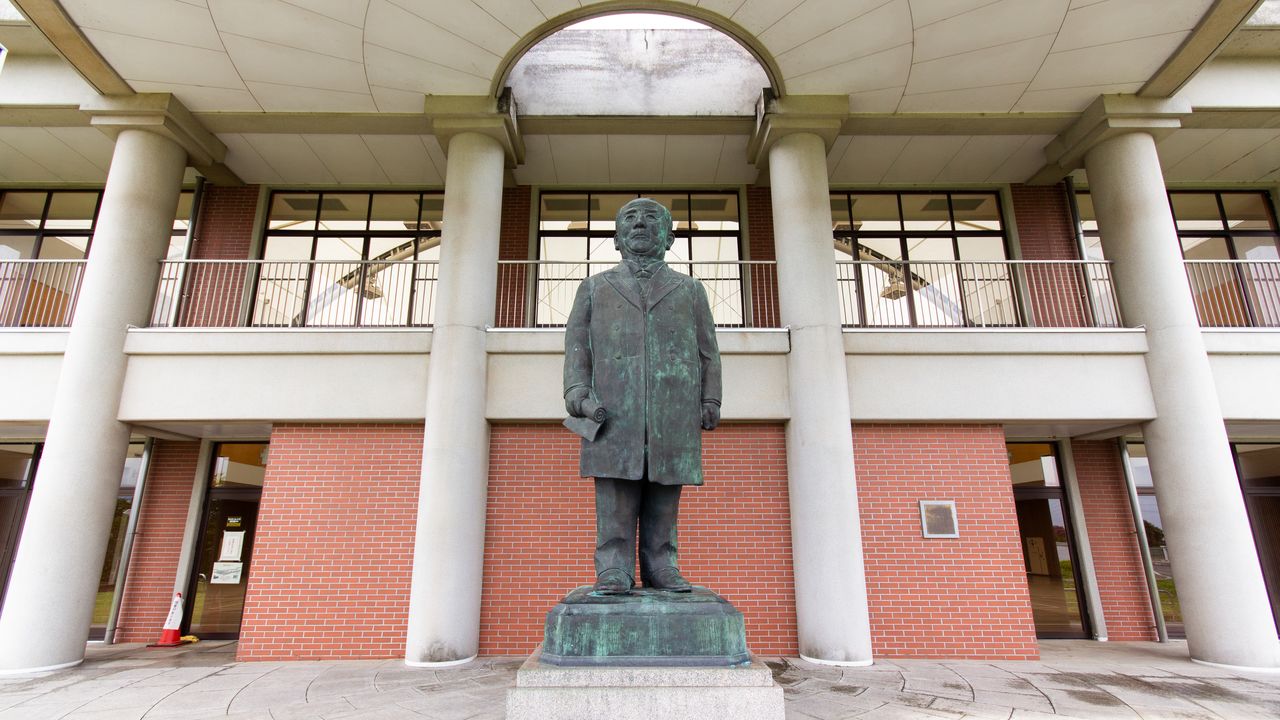 Travel Oct 3, 2019
On April 9, 2019, the Japanese government announced new designs for its banknotes, with pioneering industrialist Shibusawa Eiichi selected as the face for the ¥10,000 note. Shibusawa has been called the “father of modern Japanese capitalism” and described as a man who labored in the public interest. His birthplace, the city of Fukaya in northern Saitama Prefecture, has many sites closely associated with Shibusawa’s life and achievements.

The new ¥10,000 notes, scheduled to arrive in Japanese wallets in 2024, will feature a portrait of Shibusawa Eiichi (1840–1931), who was involved in the founding of over 500 companies, and was known for his efforts in over 600 public welfare organizations.

Since the announcement that he would feature on the new banknotes, there has been much excitement in Fukaya, Saitama Prefecture, where he was born. There are many historical landmarks and buildings connected with Shibusawa near his birthplace, the Fukaya district of Chiaraijima. The Shibusawa Eiichi Memorial Museum, located in the city’s Shimotebaka area, saw a surge in interest following the news regarding the ¥10,000 note. Visitor numbers in the first month after the announcement exceeded the previous year’ total, as people flocked to view the many fascinating photographs and historical materials on display there. 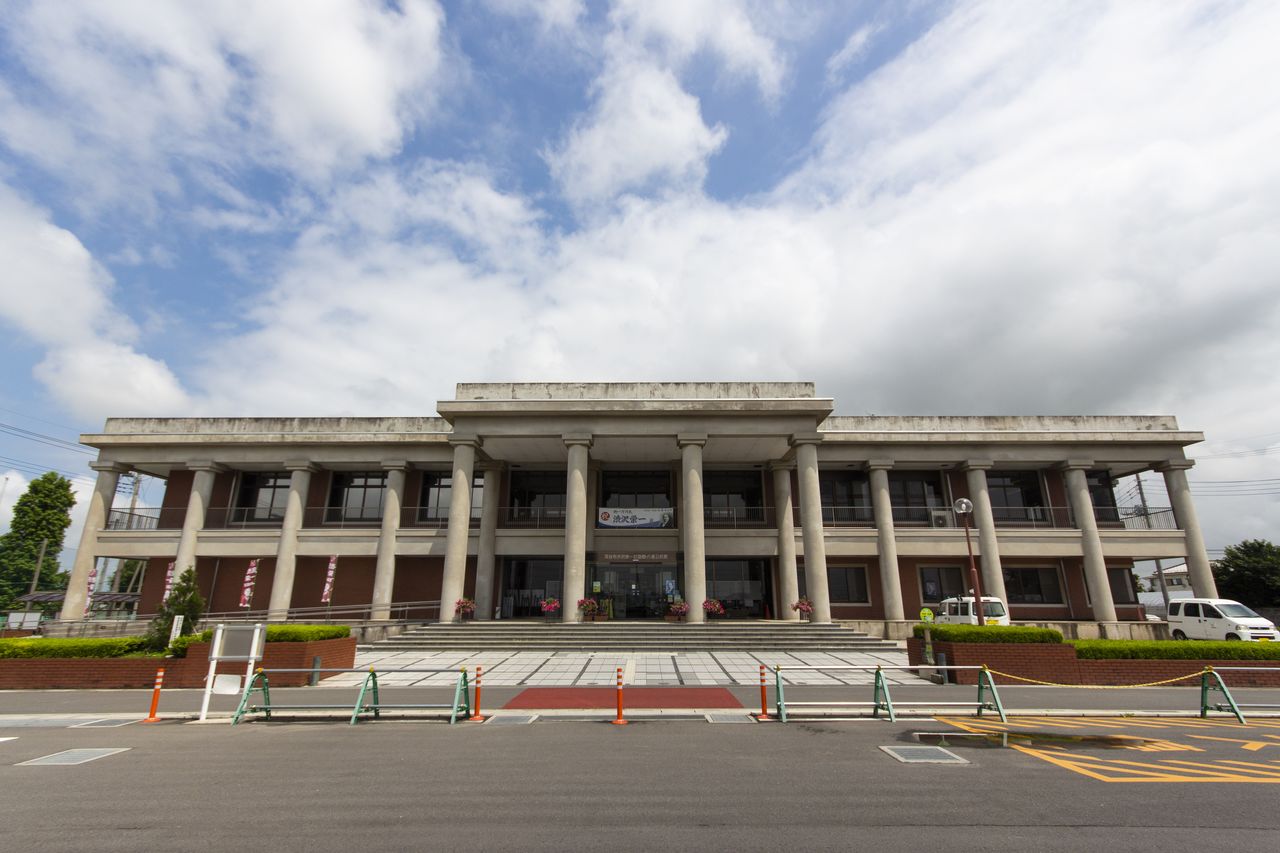 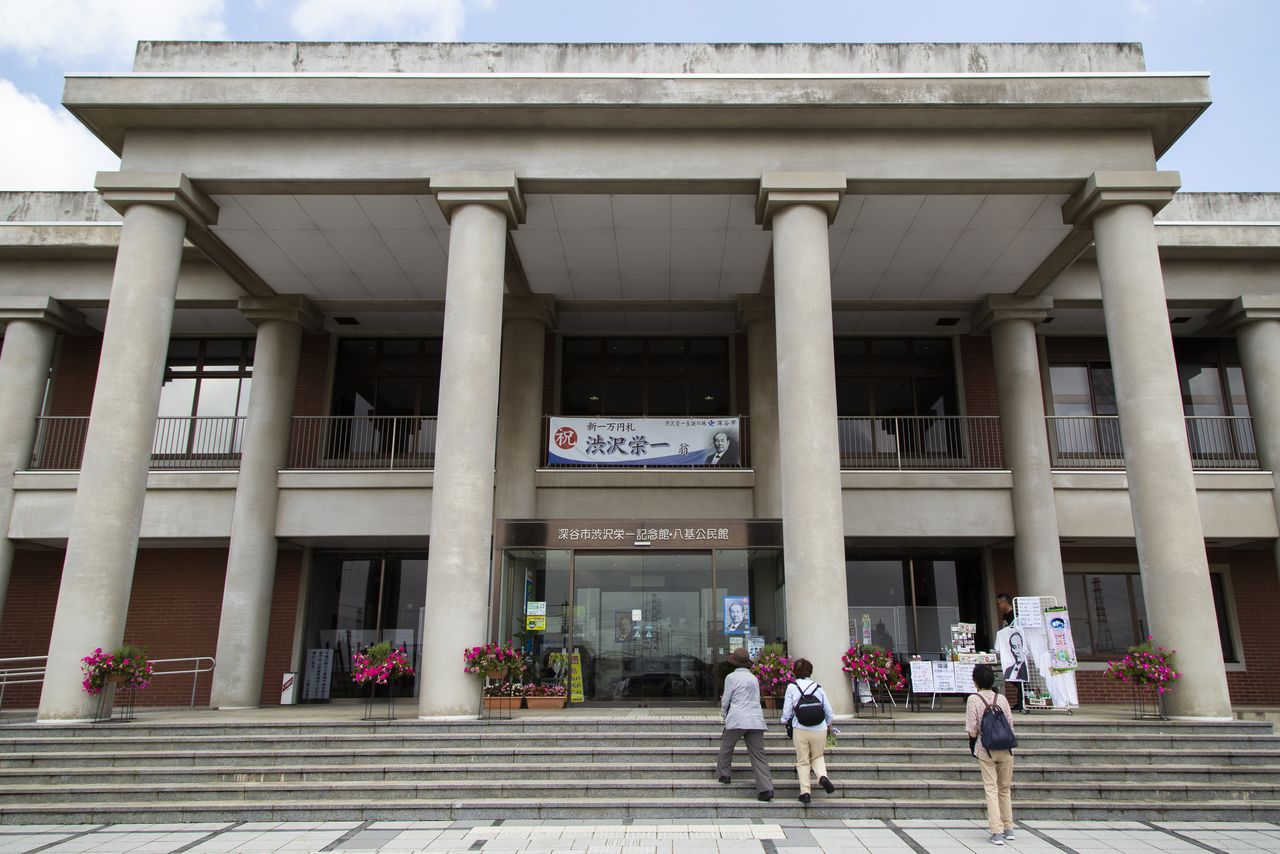 A banner above the main entrance celebrates the forthcoming ¥10,000 note.

A Man Short in Stature and Big of Heart

Upon entering the Shibusawa Eiichi Memorial Museum, visitors find the display room dedicated to the famed industrialist immediately to the left. The building also contains the Yatsumoto community center’s activity meeting rooms of the, as well as a local library. 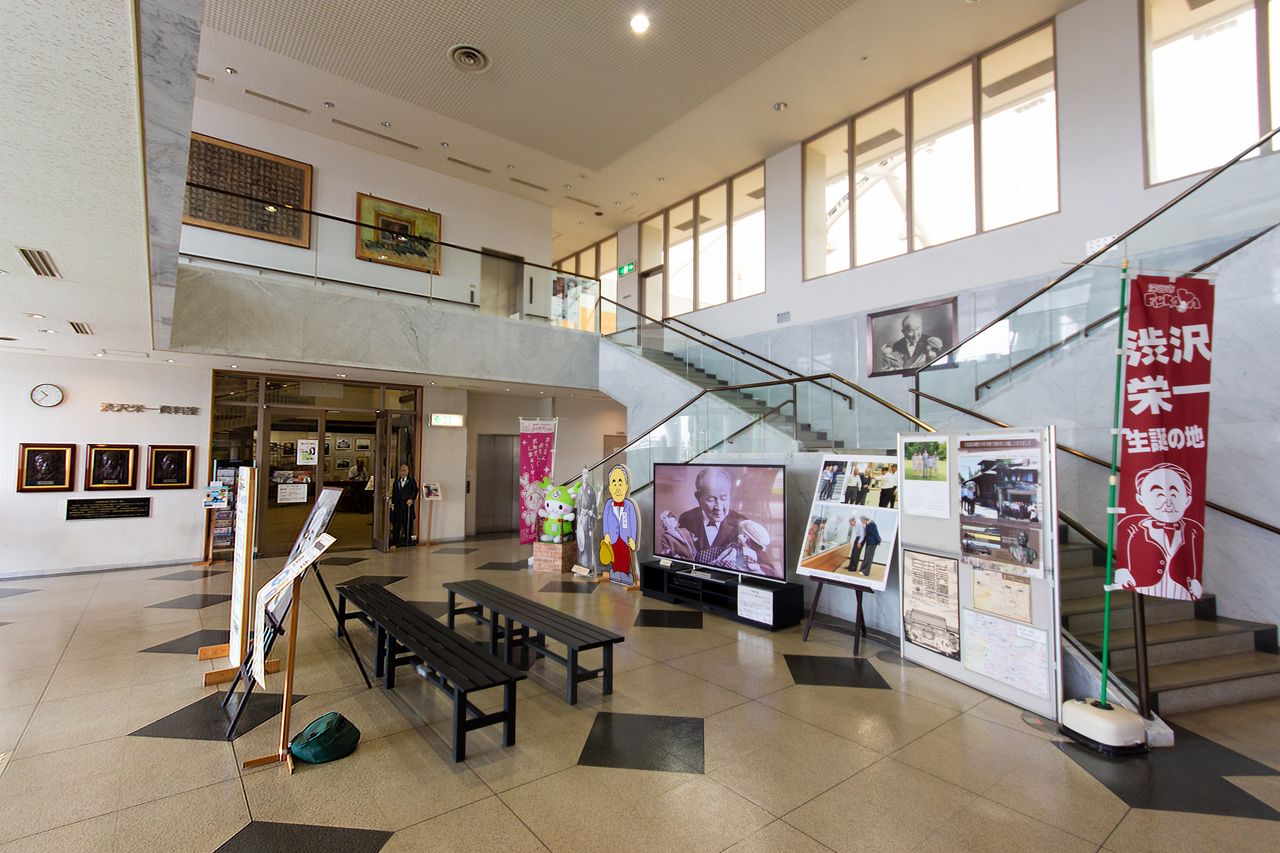 The museum entrance. The Shibusawa display room is visible to the rear.

When you visit the museum, note the large statue of Shibusawa Eiichi on the northern side of the building. The statue commands an impressive view of Mount Akagi, standing in Gunma Prefecture to the north. While the statue reaches five meters above the ground, Shibusawa was a short man, only around 150 centimeters tall. However, he was a giant in terms of his achievements. 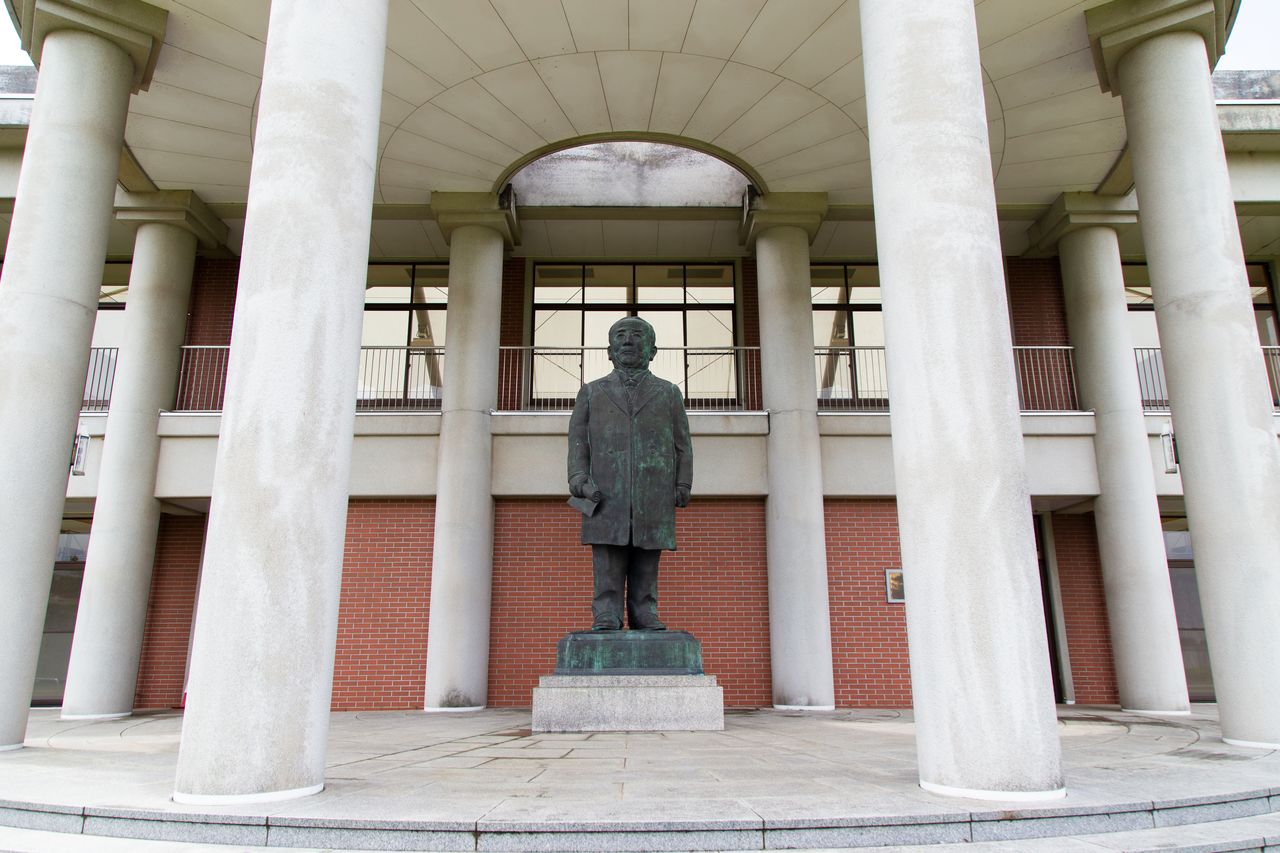 Shibusawa’s statue, on the northern side of the museum building, looks out toward Mount Akagi.

Shibusawa was born into a wealthy farming family engaged in crop and silkworm farming and the production and sale of indigo for fabric dyeing. At the age of seven, he began studying the Analects of Confucius and history under his cousin Odaka Junchū, while also helping with the family business and developing his acumen. When he was 20, Shibusawa traveled to Tokyo during the quiet season to attend the school operated by Confucian scholar Kaiho Gyoson and the Chiba Hokushin Ittōryū school for the art of the sword, whereupon he became enamored with sonnō jōi political philosophy, which promoted reverence of the Emperor and the expulsion of Westerners from Japan.

At the age of 23, Shibusawa conspired with others to capture Takasaki Castle in southern Gunma and planned an arson attack on the foreign quarter in Yokohama. The schemes proved unsuccessful, but he subsequently relocated to Kyoto to avoid suspicion, taking up a position in the service of the Hitotsubashi-Tokugawa family, with whom he had a connection from Edo (later Tokyo). When Tokugawa Yoshinobu became shogun in 1866, Shibusawa became a shogunate retainer. In 1867, he joined the delegation of Yoshinobu’s brother Tokugawa Akitake on a research tour of France and other European countries. After returning to Japan, he employed his overseas experience to assist the new Meiji government in its efforts to modernize Japan. Shibusawa retired to the private sector in his mid-thirties to become a leading banker and entrepreneur. During his life, he also worked hard to establish social welfare organizations and educational institutions, until his death at age 91.

A curator is on duty in the exhibit room to guide visitors around the displays, time permitting. Explanations from this specialist can provide even deeper insight into the remarkable achievements of Shibusawa. Items on display from his adolescence, which he spent in Fukaya, are of particular interest. 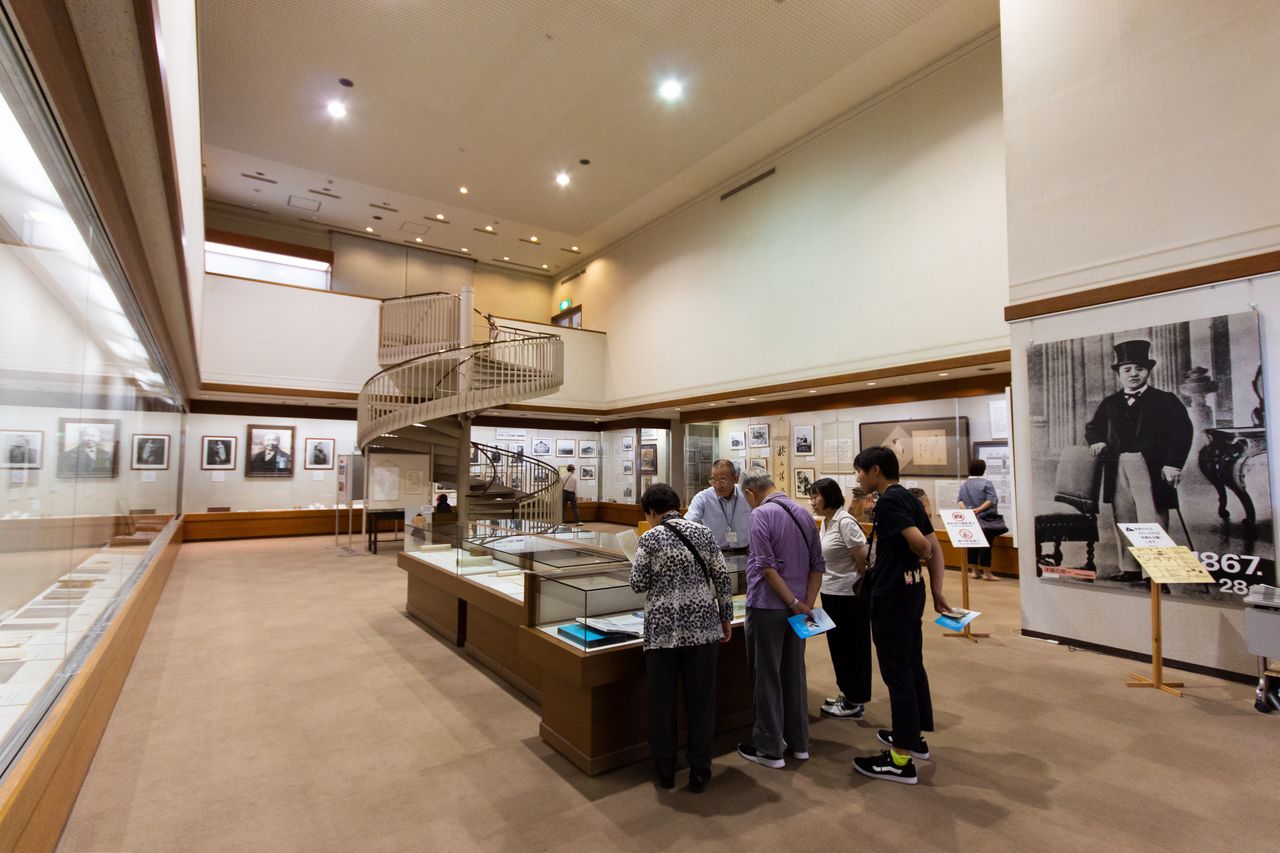 A spacious area is provided for the Shibusawa display. A curator is on hand to provide additional explanation, so visitors need not worry if they lack background knowledge.

One item on display is a ranking of indigo dye farmers that was devised by Shibusawa in 1862, when he was 22. It employed a banzuke style akin to the ranking lists of sumo wrestlers, and is an indication of the innovative ideas he would later employ as an entrepreneur. Shibusawa himself acted as judge, assigning rankings to the farmers based on the quality of their indigo. The farmers competed to boost their ranking, honing their knowledge in an effort to improve the quality and volume of their harvest the following year. Even then, Shibusawa believed that by producing better quality indigo, they could improve profits, thereby boosting the production capabilities of each village and the region as a whole and creating greater abundance for all. 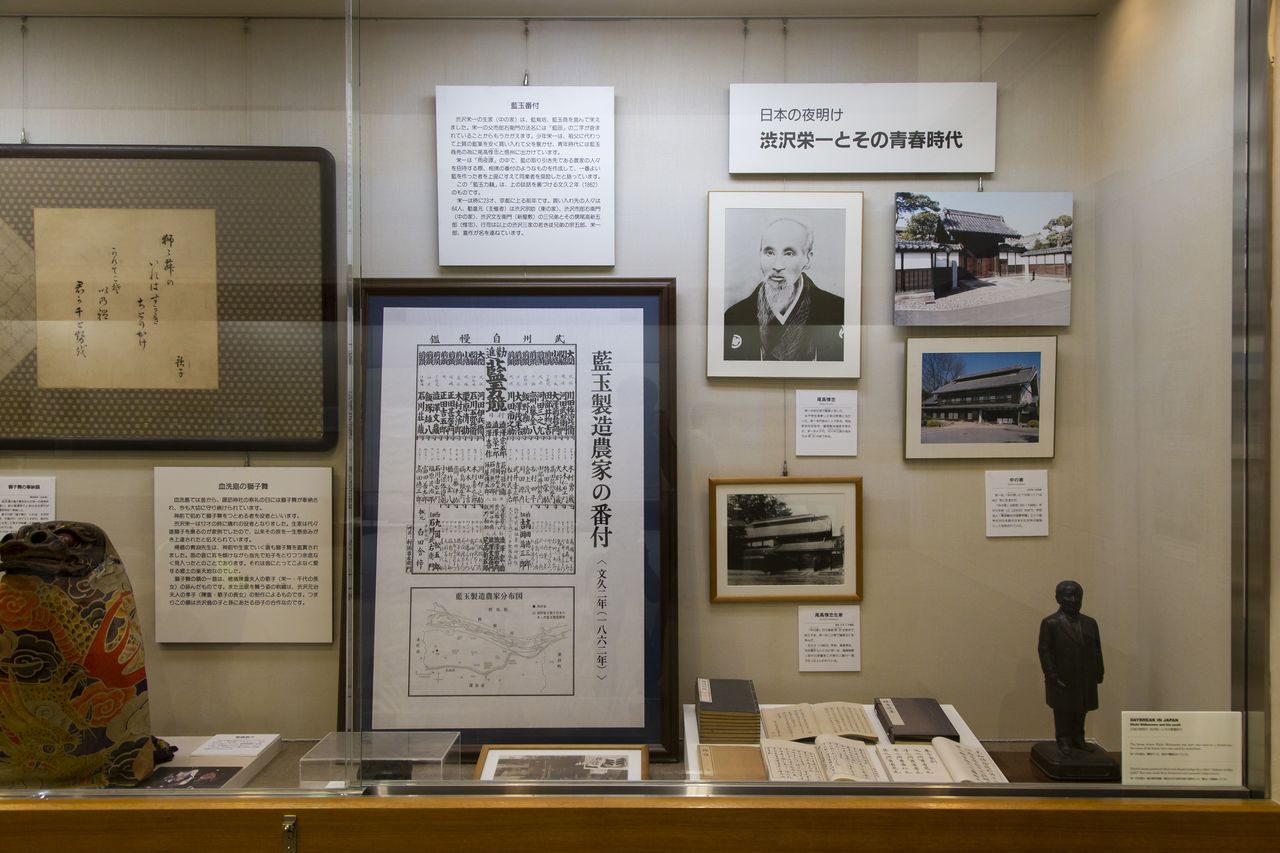 The large document at center shows Shibusawa’s ranking system for indigo farmers. Toward the top on the right side is an image of Odaka Junchū, who instructed Shibusawa in the Analects of Confucius.

Shintaku (Oracle), penned by Odaka Junchū, is another must-see. The document was a call to action based on the sonnō jōi political philosophy. It is difficult to reconcile this extremist text, which espouses expulsion of foreigners, with the Odaka who later became the first manager of the Tomioka Silk Mill, where he promoted Westernization of silk production. Although his radical plans were not carried out, the passionate tone of the writing gives an overwhelming sense of his sense of righteousness and purpose. It is a valuable document providing insight into the futures of these two men. 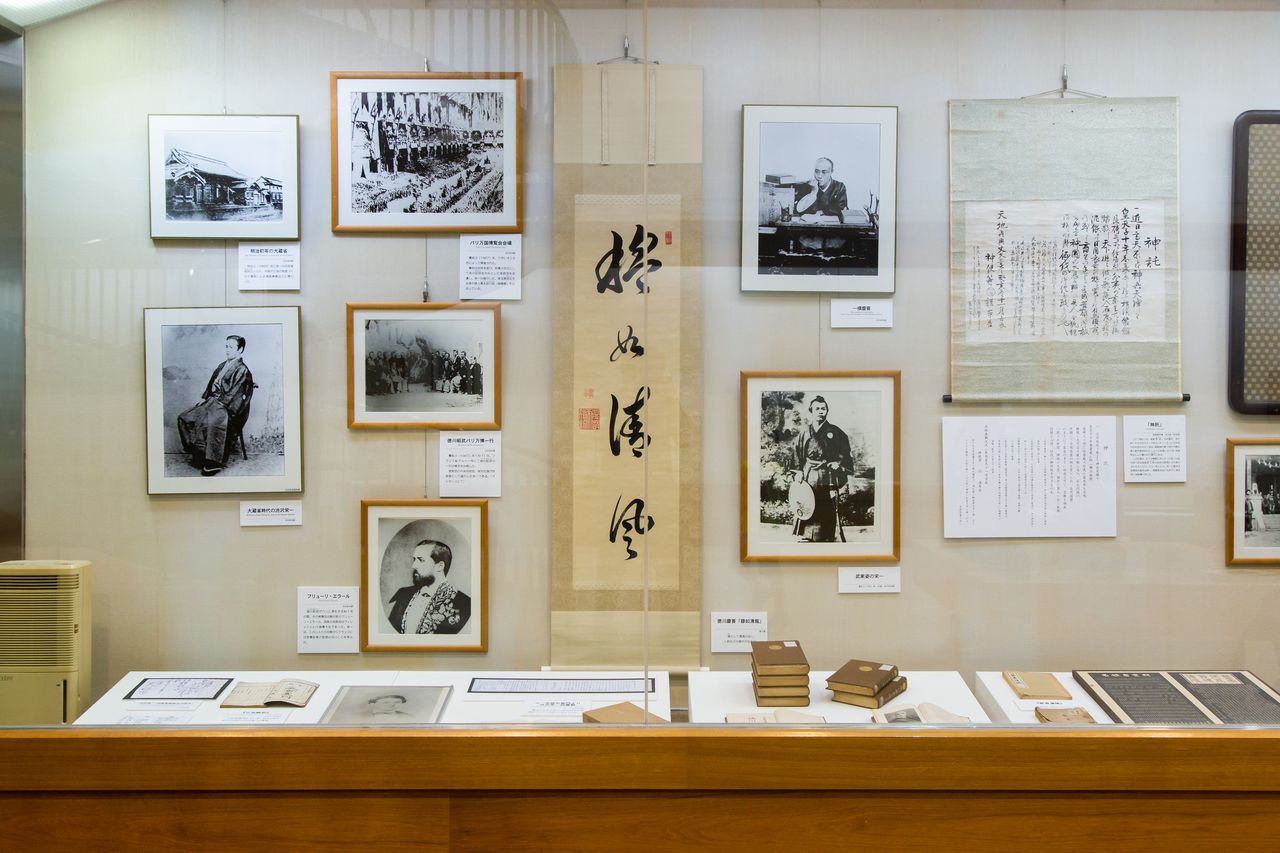 Shintaku (Oracle) written by Odaka is on the right. Other artifacts shown include a document penned by Tokugawa Yoshinobu and photographs from the mission to France.

The museum also displays many photos pertaining to businesses that Shibusawa helped establish, as well as the social welfare and international liaison activities that he was involved in. A recording of Shibusawa explaining his theory integrating morals and economics is available for listening on the museum’s second floor.

Baba Yūko, curator and assistant to the museum director, hopes that the announcement of the new banknote will inspire more people to visit Fukaya.

“Shibusawa Eiichi left a remarkable legacy and has been called the father of modern Japanese capitalism, but because his achievements were so diverse, it can be difficult to form an accurate image of the man. Visitors to our exhibition are often surprised to discover that Shibusawa helped to establish a certain company or school, and comment that they felt they gained a more intimate understanding of the man. People keen to discover more about Shibusawa can also visit his family home, called Nakanchi, or the birthplace of his teacher Odaka Junchū, which are also in Fukaya.” 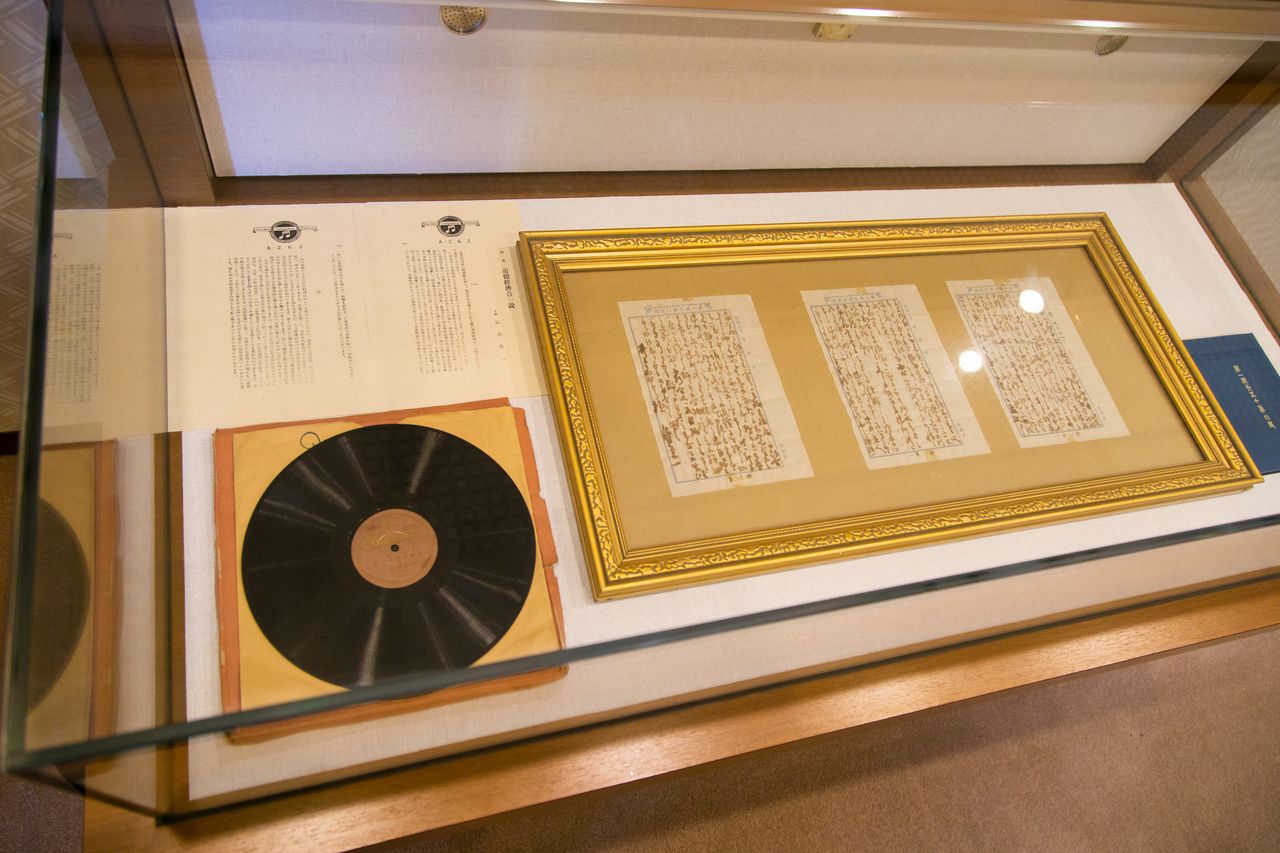 A recording of Shibusawa speaking. Visitors can listen to it on the second floor.

Shop proprietor Kawamoto Tetsurō explains that they were involved in promoting Fukaya and Shibusawa even before the announcement that his portrait would decorate the ¥10,000 banknote.

According to him, the recent attention has been “just a coincidence.” Whenever there was a festival or similar event in the city, people wondered why there were no souvenirs of the local hero. In response, Kawamoto San’yōdō began producing t-shirts and stamps without concern for profit. 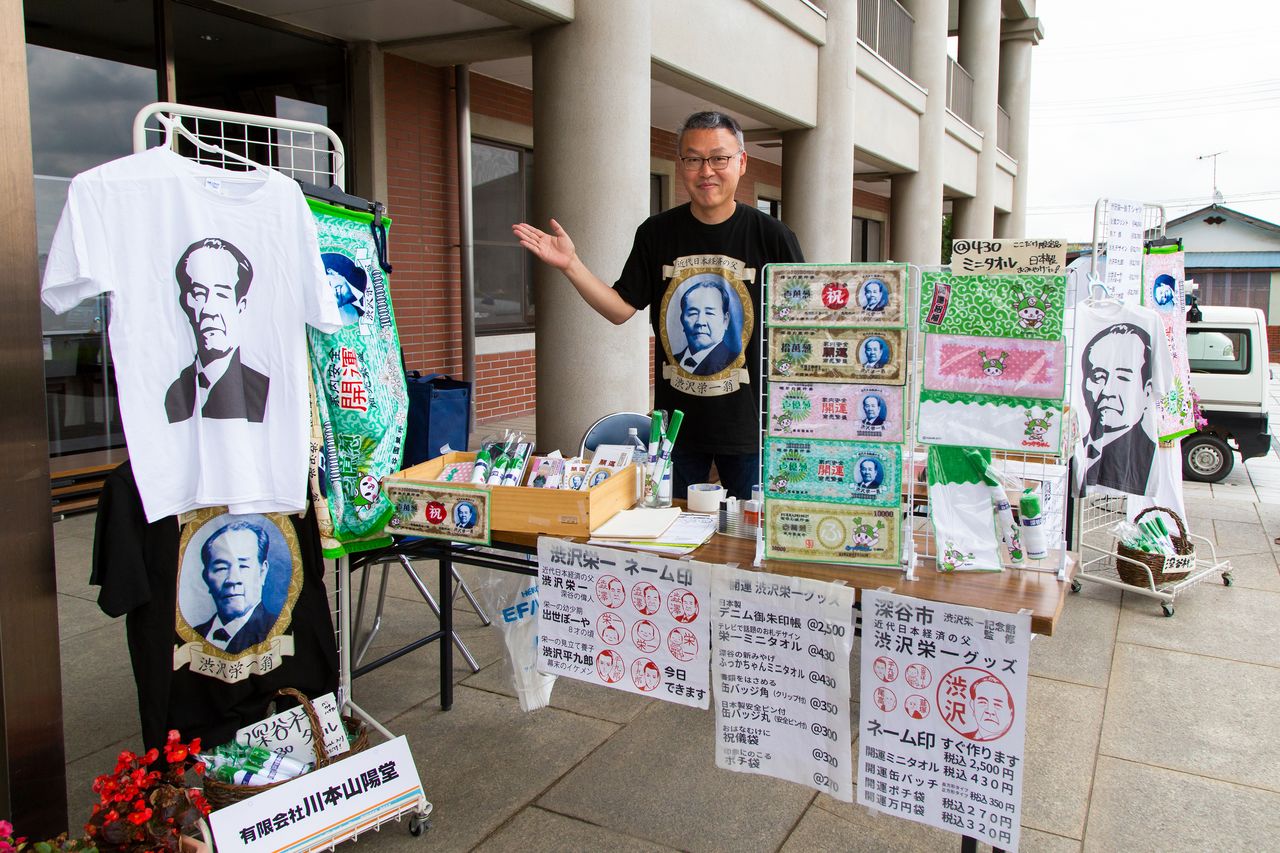 Kawamoto San’yōdō proprietor Kawamoto Tetsurō with his shop’s array of Shibusawa souvenirs. Mini-towels are designed to look like banknotes, but the “currency” listed on them is the spring onion, a well-known agricultural product of Fukaya.

“After the announcement of the new banknote, we were contacted by major online retailers marketing their products, but we turned their offers down,” explains Kawamoto. “Our main concern is to provide unique goods that are only available in Fukaya. In that way, the city will gain popularity among tourists and they will continue buying our souvenirs. This is the essence of Shibusawa’s theory that morals and economics are inseparable.”

Shibusawa believed that ethics should be the foundation for economic activities, and that returning profits to local people leads to greater prosperity for society and further expansion of business. The world is starting to reevaluate the philosophy of Shibusawa Eiichi, but it seems to already have taken root among Fukaya’s residents. 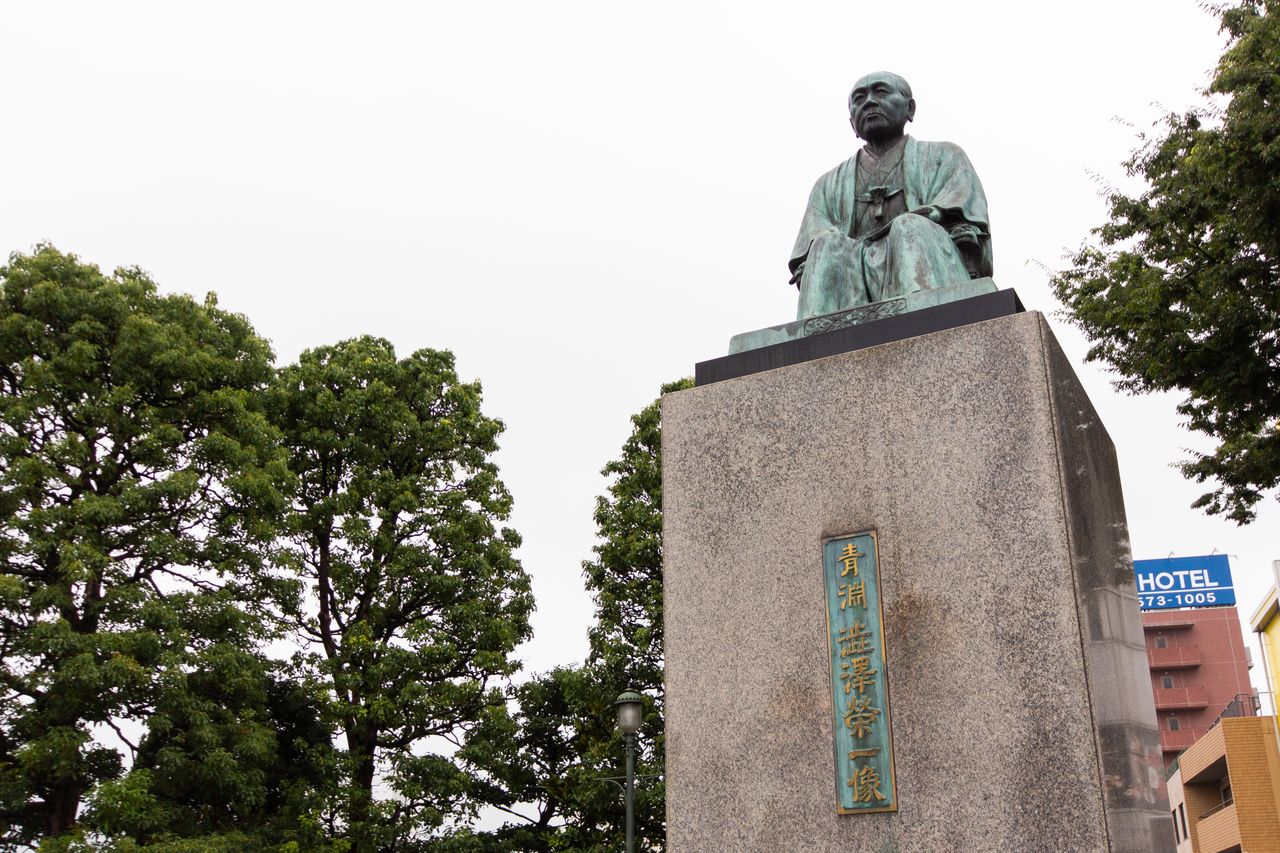 Another statue of Shibusawa Eiichi stands outside Fukaya Station.