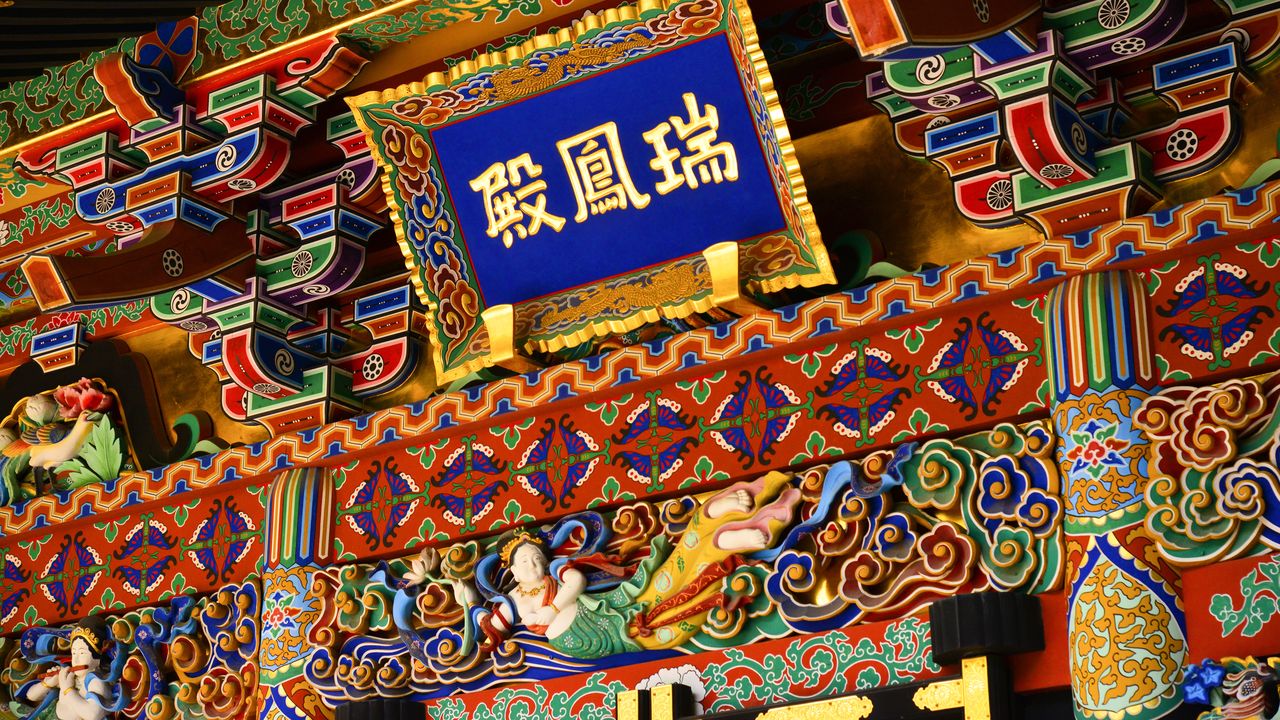 Date Masamune’s Sendai: Zuihōden and Other Notable Temples and Shrines

History Travel Sep 4, 2020
Sendai, the “City of Trees,” is full of sites closely related to its founder, Date Masamune (1567–1636), including a splendid mausoleum befitting the warlord’s flamboyant style. The city is also dotted with numerous temples and shrines representing the sophisticated architecture and craftsmanship of the times.

Date Masamune died in 1636 at the age of 70. Before his death, the famed warlord left instructions for a mausoleum to be built at Kyōgamine on the opposite bank of the Hirose River bordering the eastern edge of Aoba Castle. The mausoleum faces the castle’s inner compound, or honmaru. The Zuihōden was built just as Masamune instructed a year after his death by Date Tadamune (1600–1658), his son and heir.

A cryptomeria-lined avenue leads to a steep flight of stone steps and the opulent Nehanmon gate built of Aomori hiba (a type of cypress) several hundred years old. Embellished with gold and lacquer, the gate marks the entrance to a sacred realm devoid of earthly desires. An exquisite representation of the art and culture of the Azuchi-Momoyama period (1568–1603), the mausoleum was designated a national treasure in the early Shōwa era (1926–1989) only to burn to the ground in the bombing of Sendai during World War II. The current Zuihōden is a replica built in 1979 based on old documents and photographs. In 2001, the whole complex underwent a major renovation to restore the original gorgeous coloration. 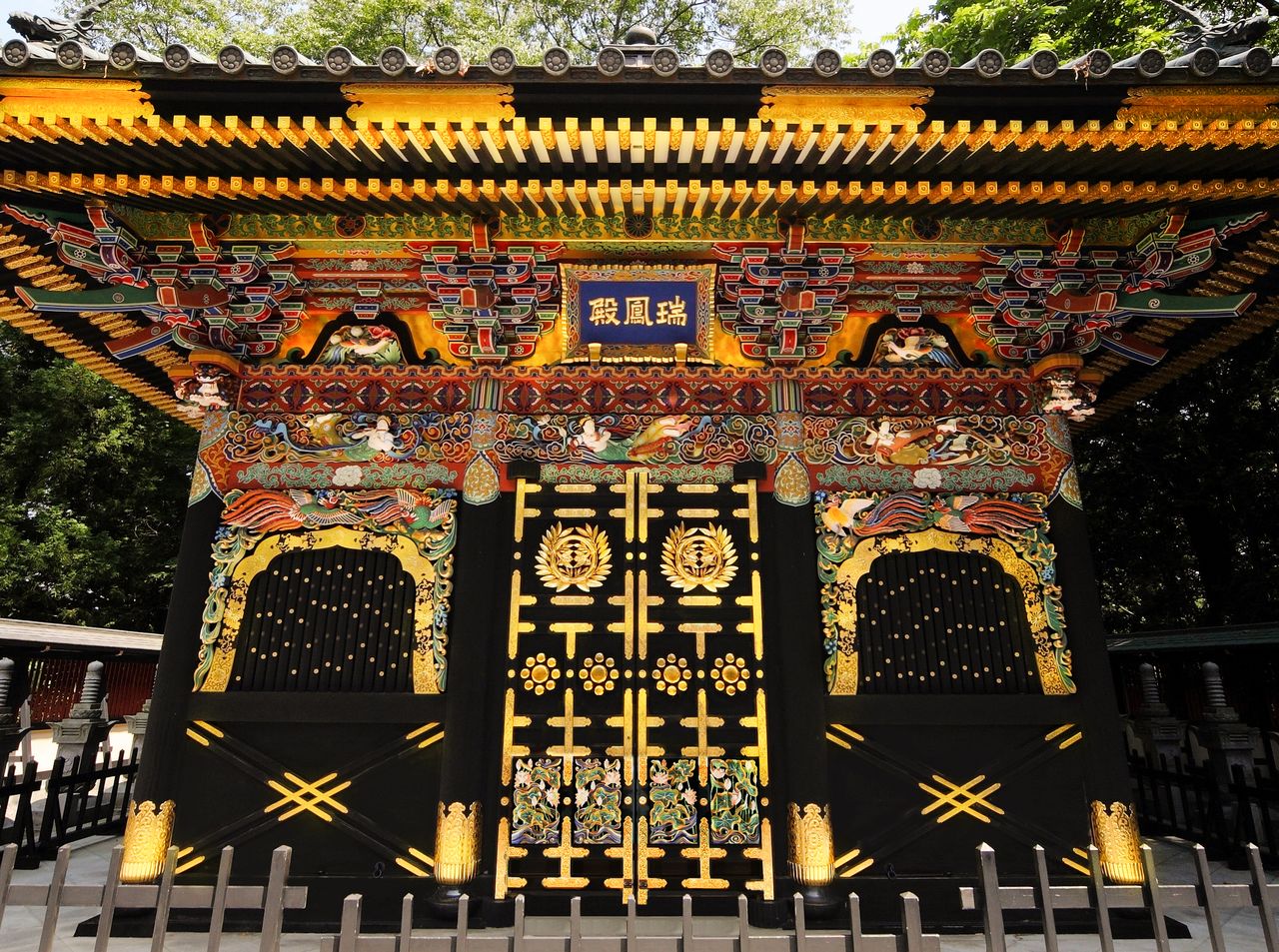 Kyōgamine where Zuihōden is located is a small rise roughly 70 meters high. (Courtesy of Zuihōden)

The brightly painted mausoleum is richly carved with phoenixes, floating celestial beings, and shishi (lion-dogs). Masamune’s body is said to be buried three meters underneath the edifice. Also to be found in the compound are mausoleums and monuments to Masamune’s children and descendants: Kansenden, the mausoleum of the second Sendai lord Tadamune; Zennōden, built for the third Sendai lord Tsunamune; and a monument marking the graves of the ninth Date lord and the eleventh Date lord and his wife. 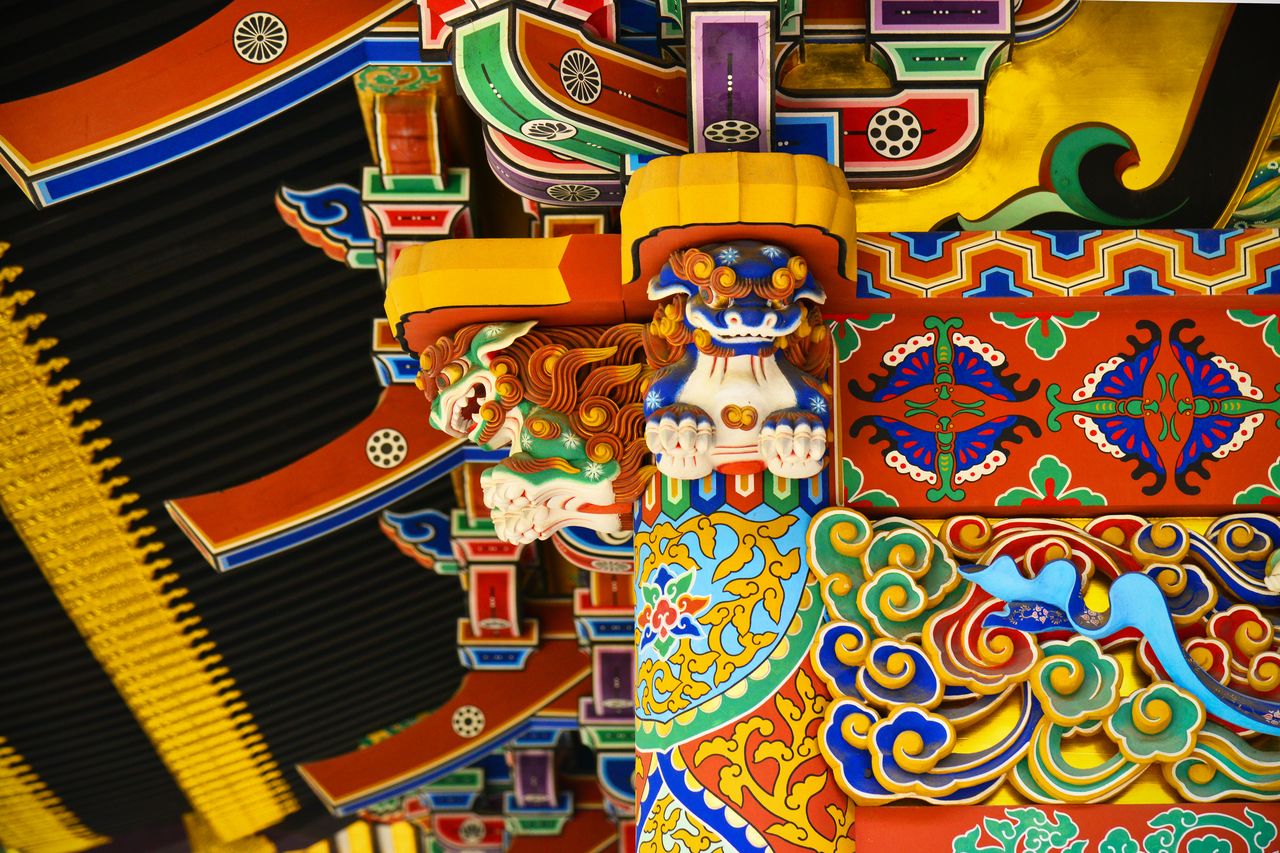 The magnificent shishi were reproduced in the major renovation of 2001. (© Shoepress)

The Shintō shrine Ōsaki Hachimangū is located in Sendai’s Hachiman district, around 15 minutes by car from Zuihōden. It was founded by Sakanoue no Tamuramaro, who was sent to subjugate the tribes of northeastern Japan in the Heian period (794–1185), and was originally located elsewhere. Masamune moved the shrine to its present location and had it completely rebuilt over a 12-year period beginning in 1604 by the leading master craftsmen of the day under service to the hegemon Toyotomi Hideyoshi (1537–1598).

The main building of the shrine sits atop a small rise deep in the grounds and is approached by a walkway that leads from the large vermillion Ichi-no-torii gate to a flight of stone steps. It is built in the gongen style in which the worship hall in the foreground and the main hall behind it are connected by a roofed passageway and is the oldest example of this style in Japan. In 1952, Ōsaki Hachimangū was designated a national treasure. 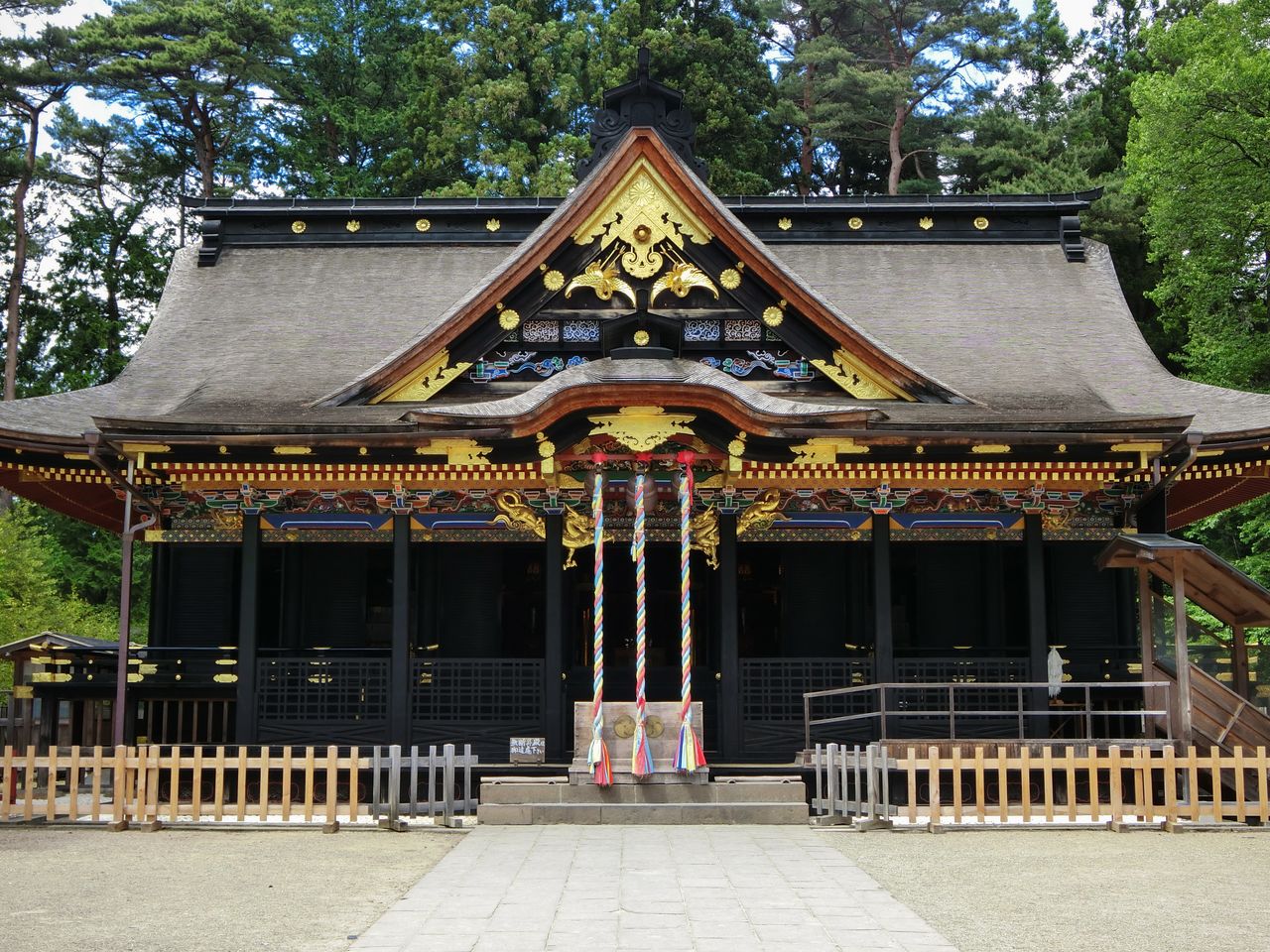 The shrine building is the oldest example of gongen architecture in Japan. (Courtesy of the Sendai Tourism, Convention, and International Association)

Ōsaki Hachimangū is the epitome of the daring flamboyance for which Date Masamune was so famous that the term date-mono continues to be used to this day to describe a person with flair and style.

The shrine buildings are lacquered inside and out. Lavish and colorful carvings of flowers, other plants and animals, as well as figures of Japanese mythology are highlighted with gold and framed by shiny posts and walls of gleaming black lacquer. The whole design is reminiscent of Masamune’s famous, black-lacquered body armor trimmed with gold cords. While Masamune’s taste for this kind of black-and-gold contrast is also evident in his Zuihōden mausoleum, it is most strongly represented in Ōsaki Hachimangū. 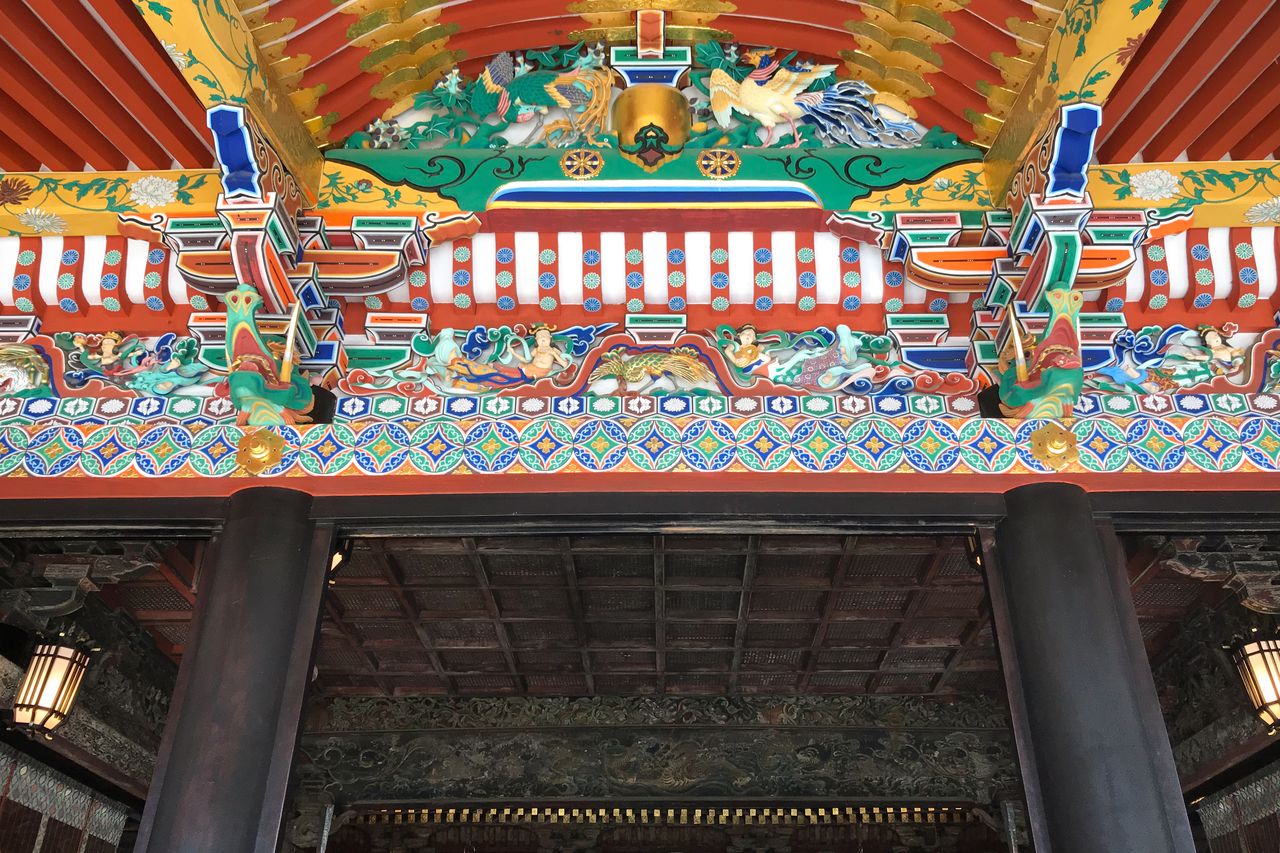 The span under the half-tipped gables at the front of the worship hall is filled with colorful carvings. (Courtesy of Ōsaki Hachimangū)

Sendai Tōshōgū: Guardian of the City of Trees

Sendai Tōshōgū is dedicated to Tokugawa Ieyasu (1543–1616), the first Tokugawa shogun, and was built by Date Tadamune in 1654. It is said the shrine was erected to express thanks for the aid proffered by the Tokugawa government after fires and floods devastated the Sendai domain following Date Masamune’s death. It took five years, vast sums of money, and 800,000 laborers to build the grand edifice.

The shrine is located in an area Masamune is said to have offered as a rest stop for Ieyasu and his forces in 1591 on their way back to Edo (today Tokyo) from subduing the Kasai-Osaki Ikki rebellion in central Mutsu province, a region spanning what is today northern Miyagi and southern Iwate Prefectures. Built to the northwest of Aoba Castle, the shrine protected the Sendai domain from this kimon, or unlucky direction. 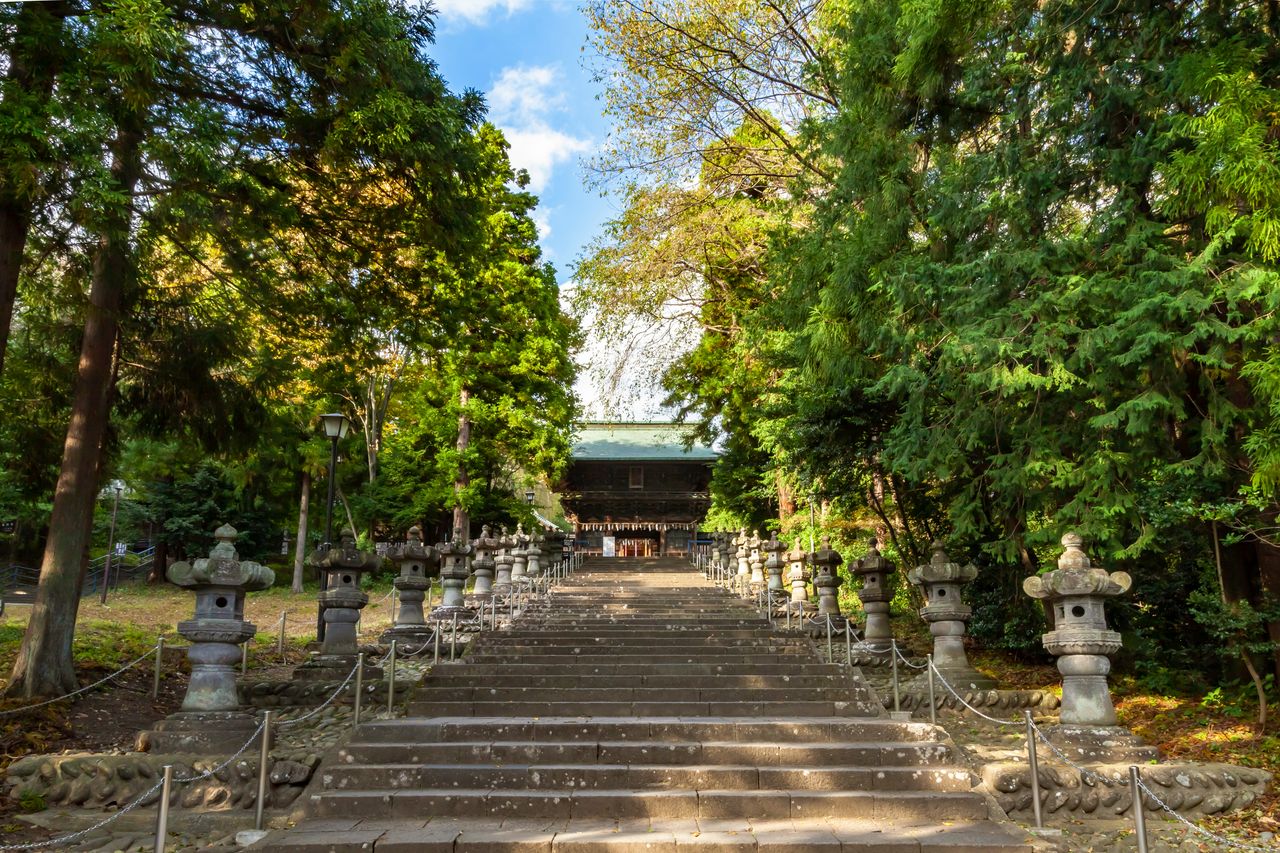 The Zuijinmon gate is a designated an important cultural property. (Courtesy of the Sendai Tourism, Convention, and International Association)

In contrast to Nikkō Tōshōgū in Tochigi Prefecture and Kunōzan Tōshōgū in Shizuoka Prefecture, both built by the Tokugawa shogunate in the gongen style, the worship hall and main hall of Sendai Tōshōgū are separated by a Chinese-style Karamon gate. The gate and main hall are off-limits to visitors, but their elaborate carvings of phoenixes, Chinese-style kara-jishi, and peonies can be seen over the fence the stretches around the worship hall. Unlike the flamboyant colorfulness of Zuihōden and Ōsaki Hachimangū, Sendai Tōshōgū has a solemn, sophisticated aura. 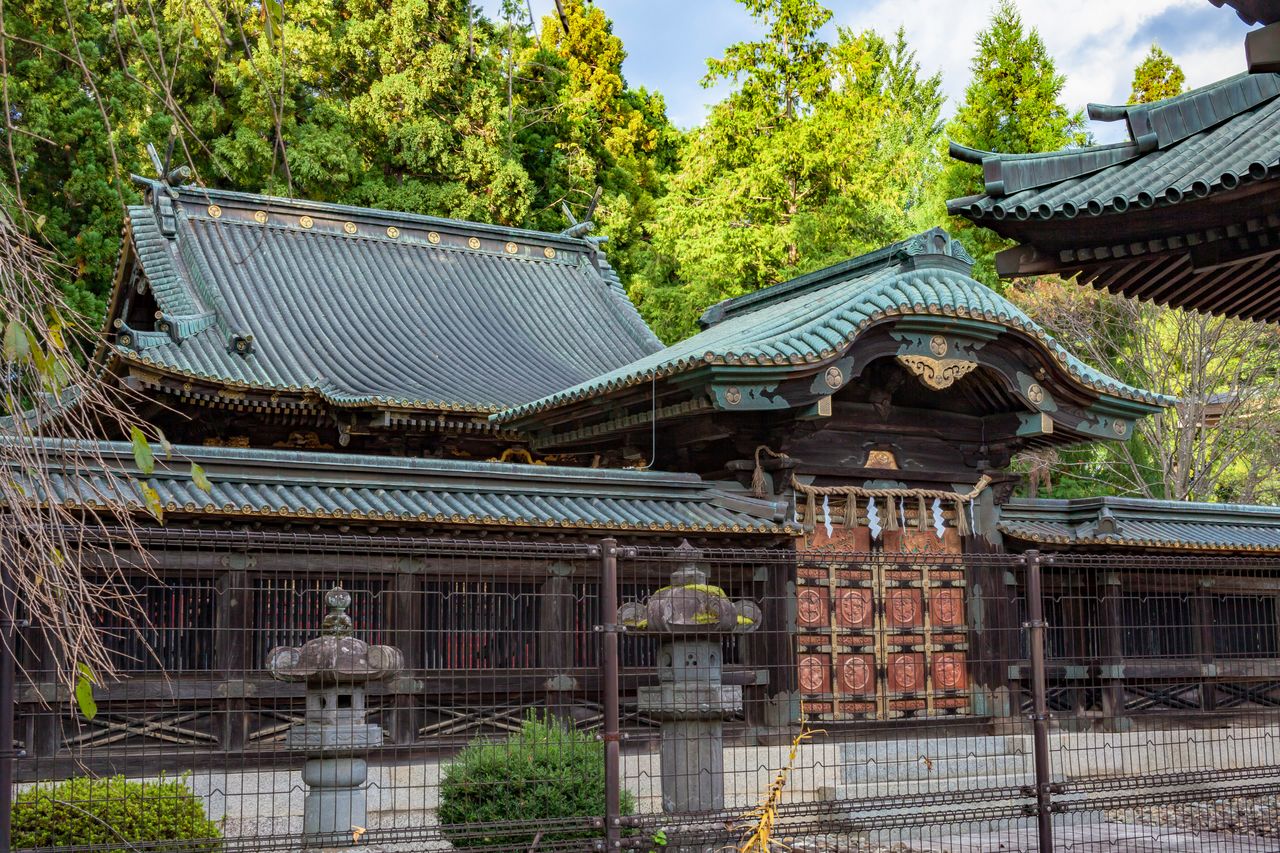 The Karamon-style gate in back of the worship hall. (Courtesy of the Sendai Tourism, Convention, and International Association) 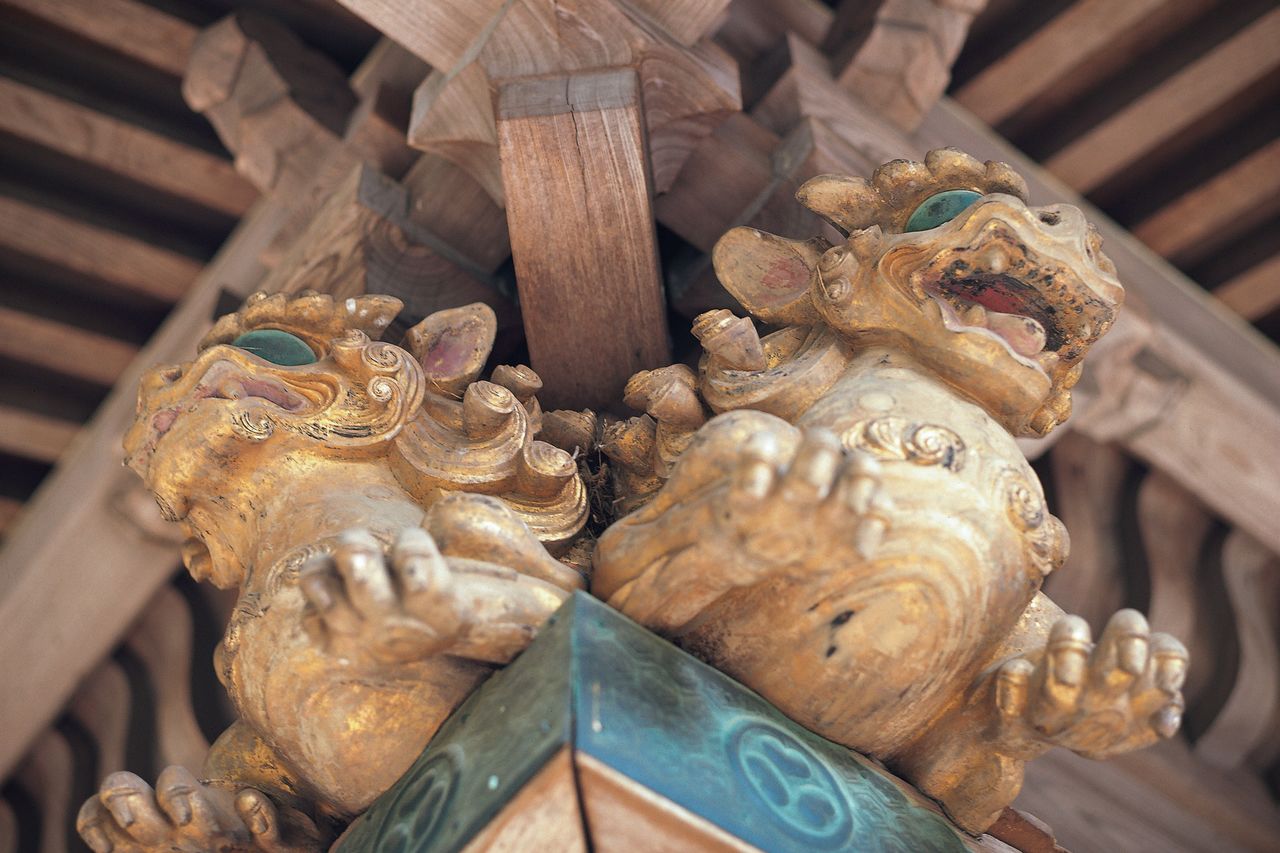 Chinese-style kara-jishi carvings in the main hall. (Courtesy of the Sendai Tourism, Convention, and International Association)

This cluster of temples with connections to Date Masamune is located in Sendai’s Kitayama district, around a 15-minute drive north of the city center or a short walk from the JR Kita-Sendai Station. 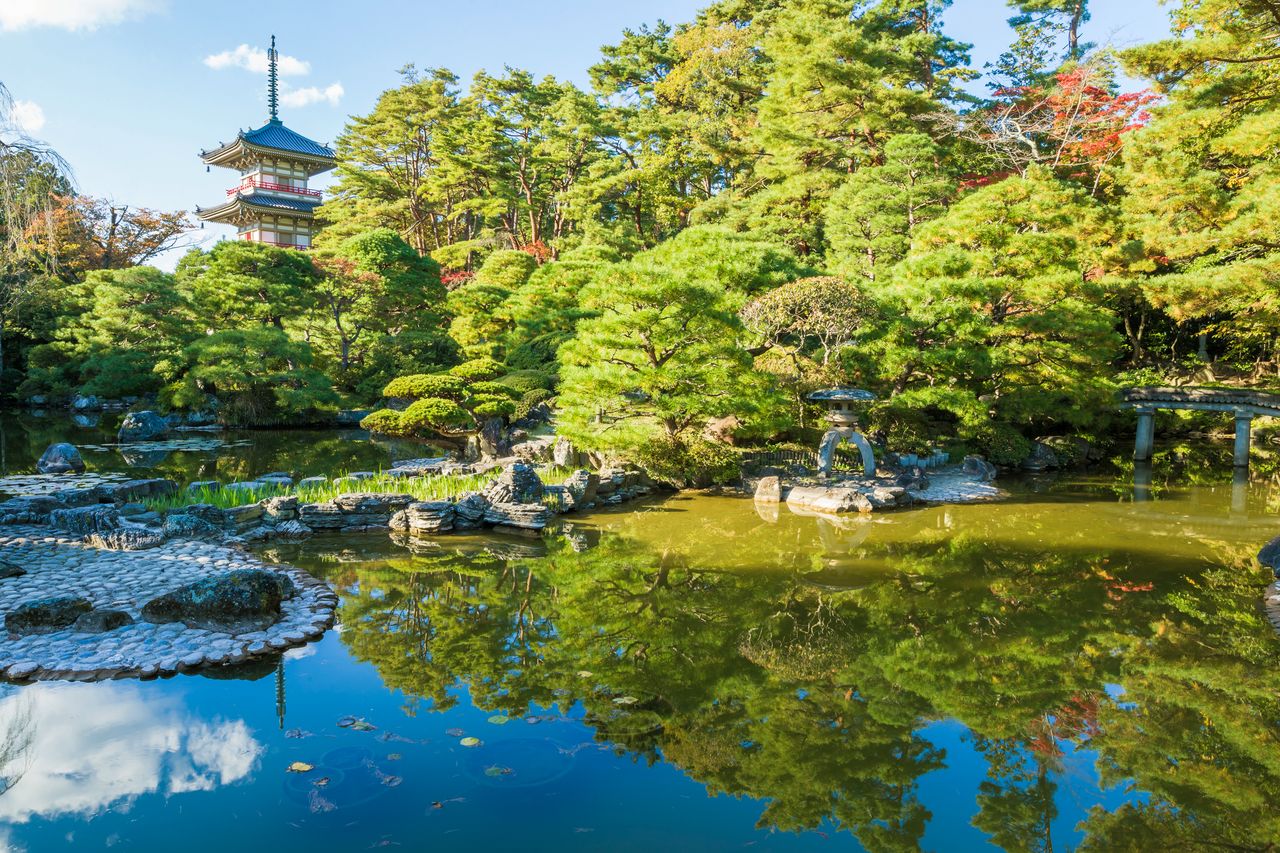 The strolling garden with pond at the temple Rinnōji. (Courtesy of the Sendai Tourism, Convention, and International Association)

Date Masayori (1227–1301), the fourth head of the Date clan, is said to have built the original five temples of Kitayamagozan in imitation of similar five-temple clusters in Kyoto and Kamakura. These temples were located in the Date district of Fukushima Prefecture and were referred to as the Dategozan. Masamune moved the five temples to their current location when he established the Sendai domain in 1601, referring to them as the Kitayamagozan. The five temples are Tōshōji, Manshōji, Kōmyōji, Kakuhanji, and Shifukuji. Manshōji was later moved to a different location. Currently, the five temples referred to as the Kitayamagozan generally include four of the original temples and Rinnōji located to their west.

The five temples of Kitayamagozan and the Aoba Shrine dedicated to Masamune are located within a 15-minute walk of each other. Local residents especially enjoy the Japanese garden at Rinnōji and the profusion of hydrangea at Shifukuji. 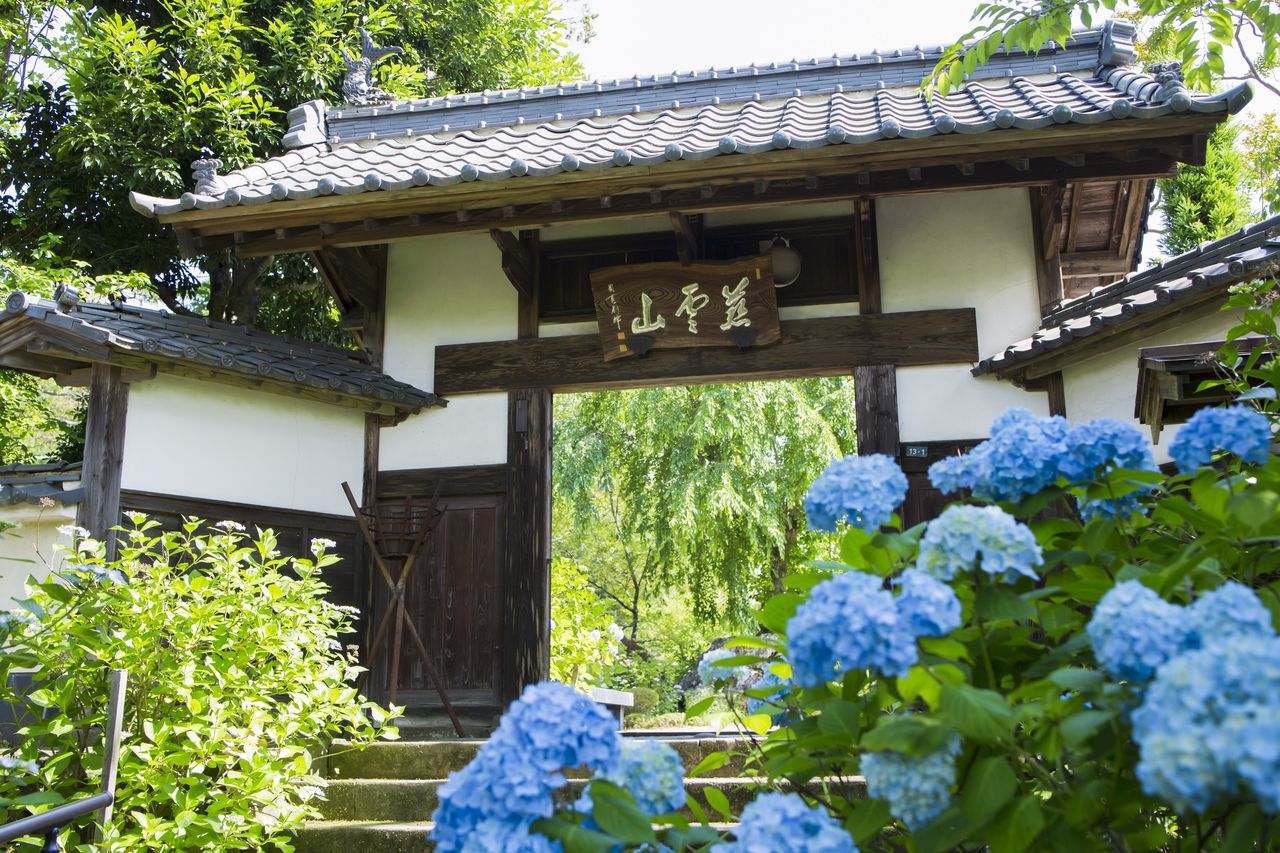 “Entrance to Shifukuji, also known as the “hydrangea temple.” (Courtesy of the Sendai Tourism, Convention, and International Association)