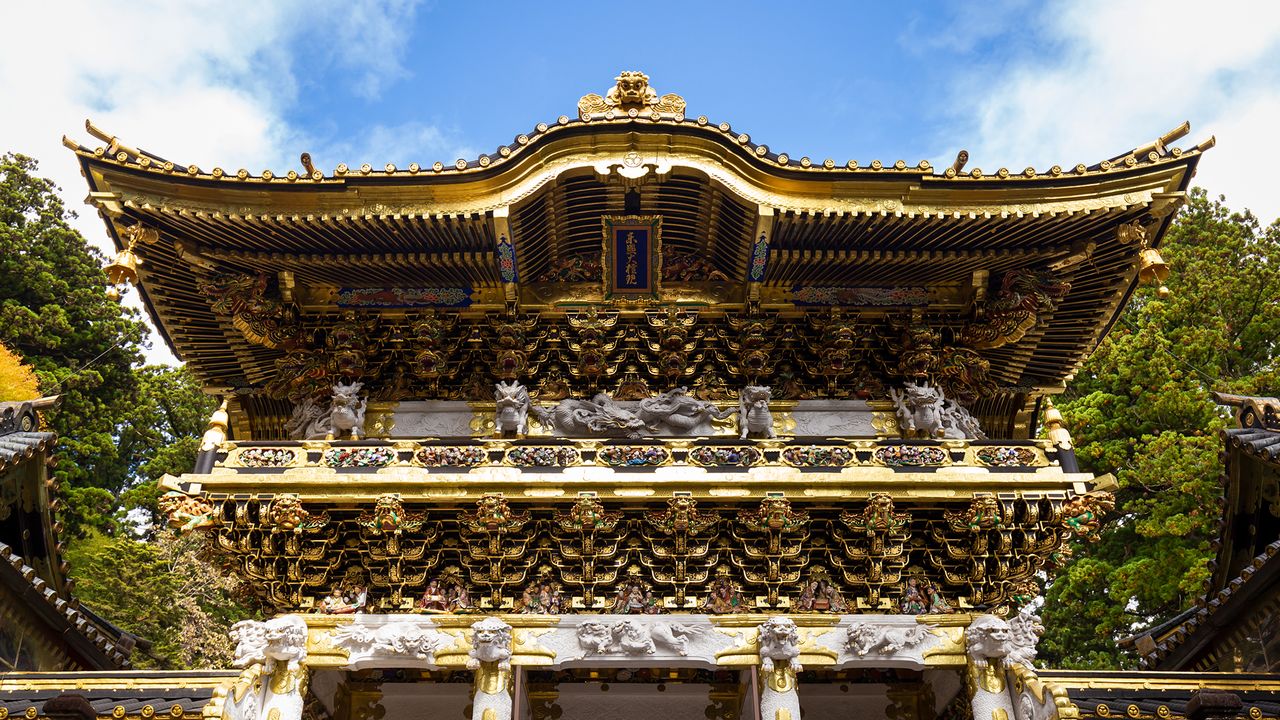 Travel History Dec 17, 2021
The World Heritage Site Nikkō in Tochigi Prefecture includes over one hundred buildings associated with two Shintō shrines—Futarasan and Tōshōgū—and the Buddhist temple Rinnōji. Of these, Tōshōgū, dedicated to Edo shogunate founder Tokugawa Ieyasu, is renowned for its majestic shrine buildings, which feature many famous carvings, and has also become popular with people who seek out its spiritual atmosphere.

Protector of the Kantō

Nikkō is closely associated with Tokugawa Ieyasu (1543–1616), who unified the country after a century of civil strife and founded the long-lasting shogunate that bore his name. Ieyasu passed away in present-day Shizuoka Prefecture, where he had retired, and was laid to rest at Kunōzan. In 1617, his remains were moved to Nikkō and he was deified as the protector of the eight provinces of Kantō.

Ieyasu’s remains were reinterred at the temple Rinnōji in Nikkō, and his successor Hidetada erected the Tōshōsha, a much less showy shrine than the present-day structures, in his honor. Third Tokugawa shogun Iemitsu deeply venerated Ieyasu and ordered the original shrine renovated, calling on the country’s most skilled artisans to create the gorgeously decorated buildings that stand today. The work was completed in 1636, and the imperial court bestowed the name Tōshōgū on the shrine nine years later. 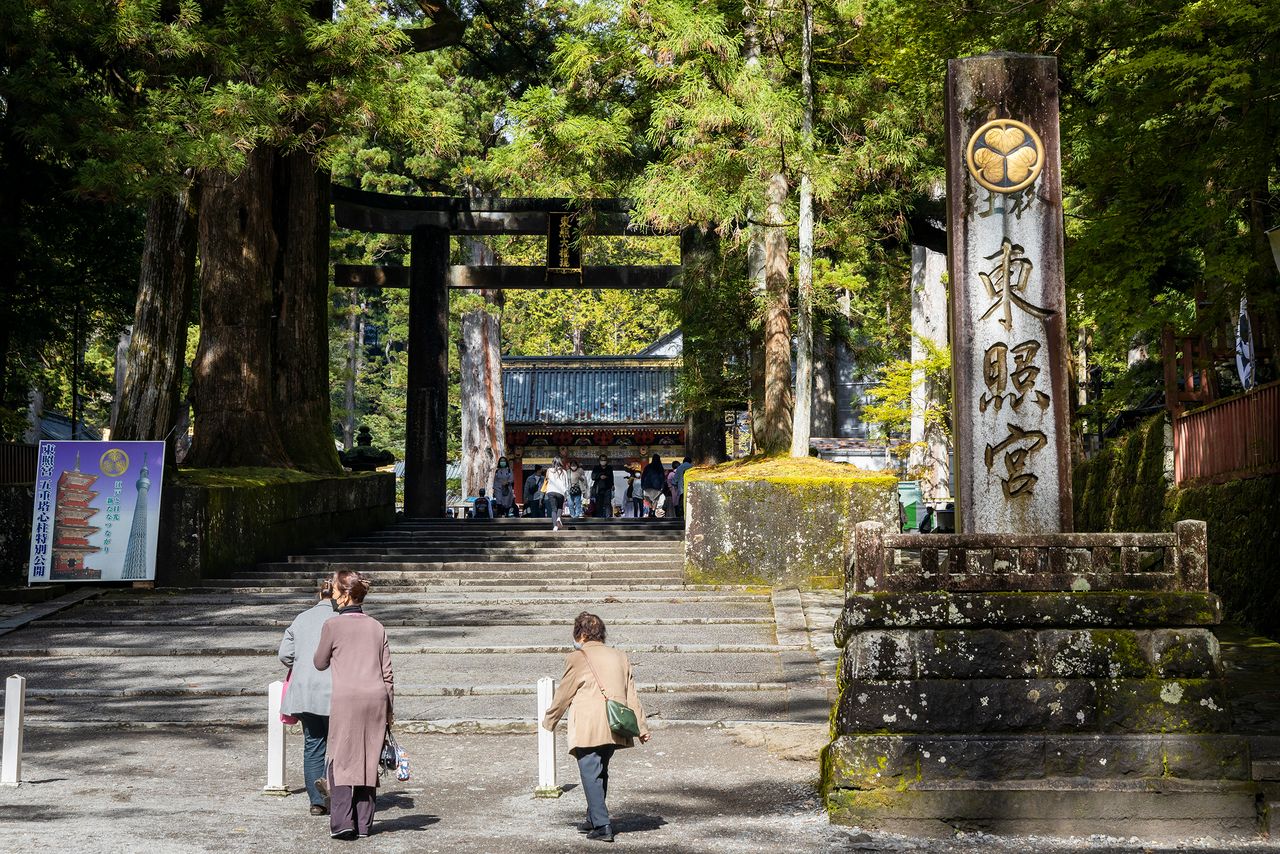 The stone monument flanking the approach to the shrine bears the triple hollyhock crest of the Tokugawa clan. 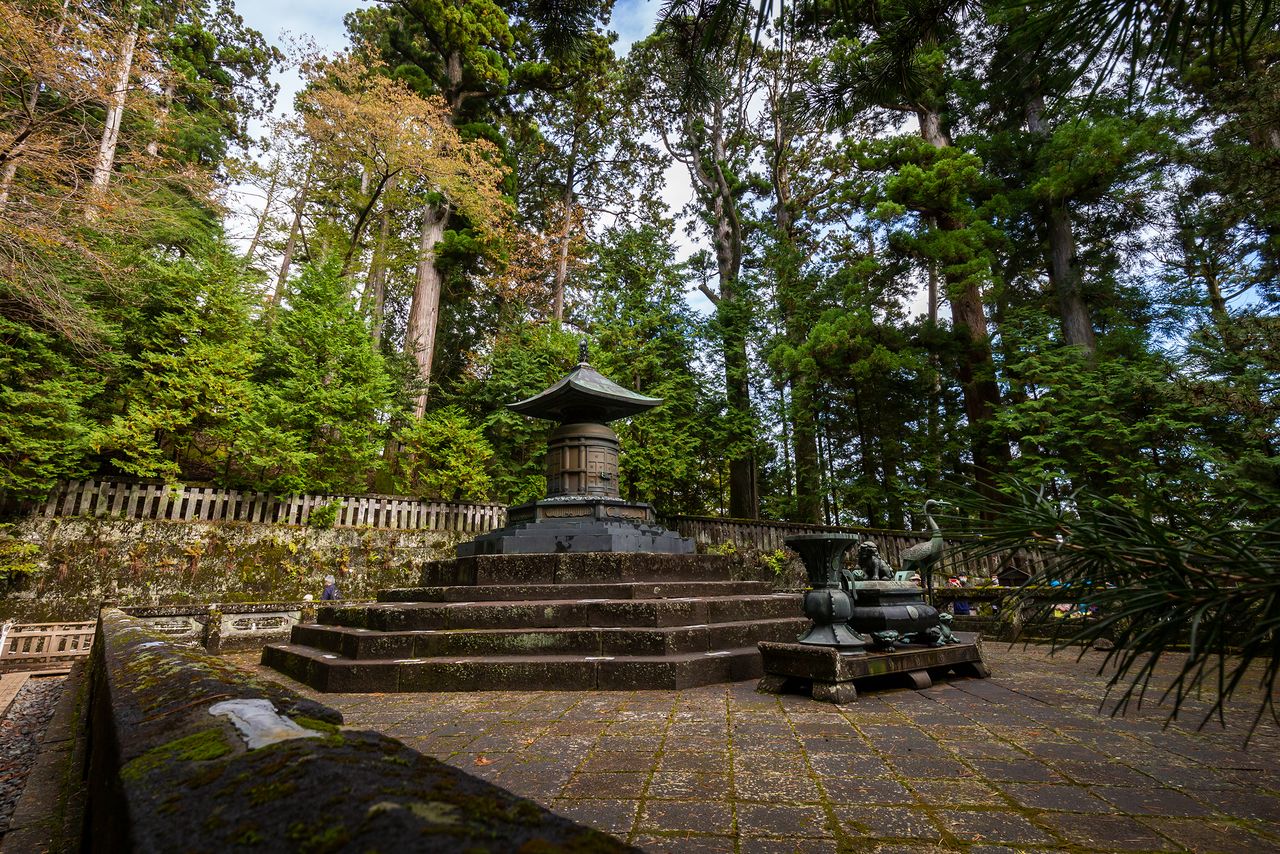 A copper pagoda-shaped tomb in the okumiya, behind the main shrine, holds Ieyasu’s remains. A candlestick in the shape of a crane along with an incense burner and a vase with shishi lion motifs stand in front of the tomb.

Iemitsu’s revere for Ieyasu was such that he built his own mausoleum near Tōshōgū to be close to his grandfather in death. The other Tokugawa shoguns up to the fourteenth in the line are buried either at the Buddhist temples Zōjōji or Kan’eiji in Tokyo. Yoshinobu, the fifteenth and last Tokugawa shogun, lies in Tokyo’s Yanaka Cemetery, where members of the collateral branches of the Tokugawa family are buried.

Rinnōji, the site of Iemitsu’s Taiyūin mausoleum, along with Futarasan Shrine and Tōshōgū, constitute the World Heritage site designated by UNESCO in 1999. After a six-year-long refurbishment, completed in 2019, Tōshōgū’s many buildings, including the honden (main hall), haiden (prayer hall), and Yōmeimon have been restored to their original splendor. 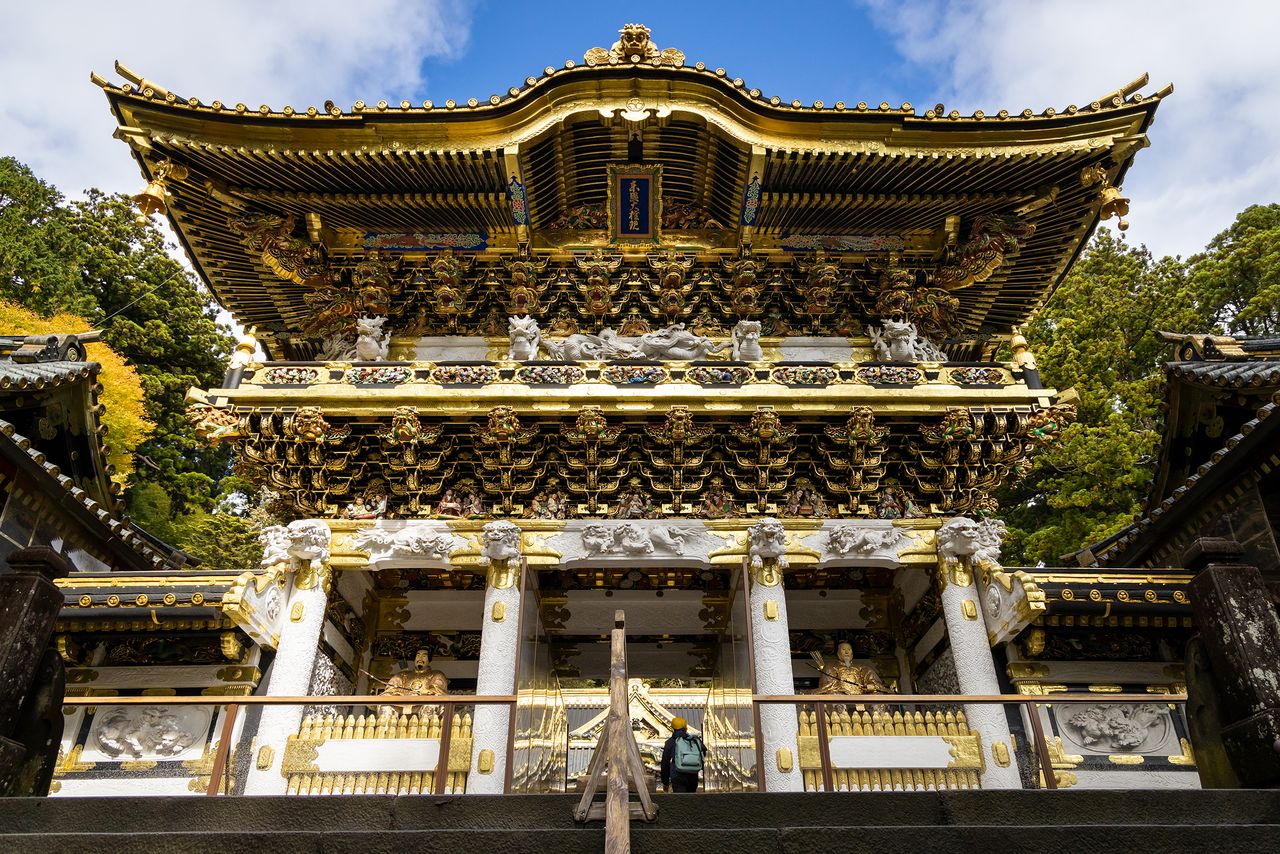 A popular saying has it that the magnificence of the Yōmeimon, also known as the Higurashimon (twilight gate), is such that one could gaze at it from morning till night.

With eight buildings designated national treasures and thirty-four structures selected important cultural properties, Nikkō Tōshōgū offers a wealth of sights. The 9.2-meter-tall stone torii marking the entrance and the five-storied pagoda nearby are also important cultural properties, presenting an impressive sight to visitors even before they proceed to the central area. 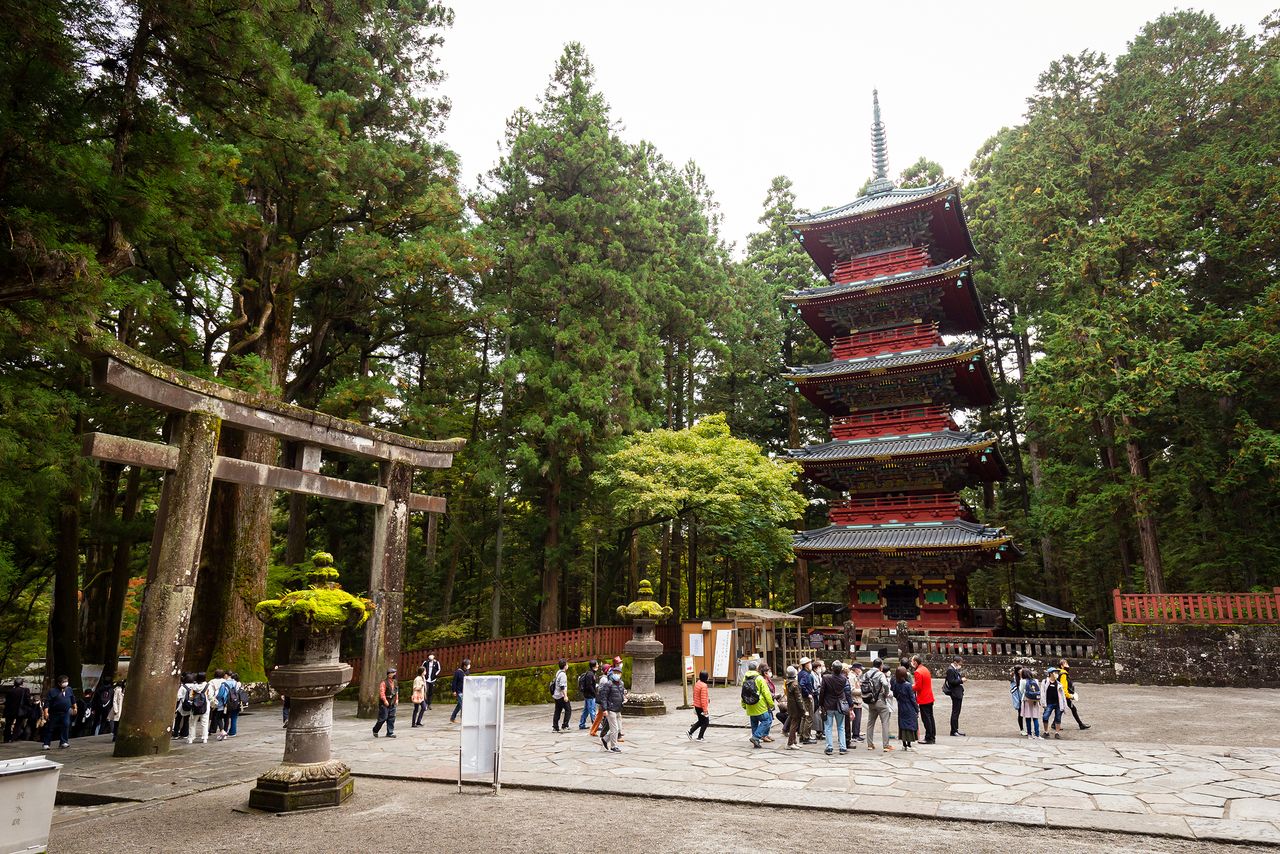 The stone torii on the left was donated by Kuroda Nagamasa, lord of the Chikuzen domain in Kyūshū. To the right, the five-storied pagoda was a gift to the shrine from Sakai Tadakatsu, lord of the Obama domain in western Japan. 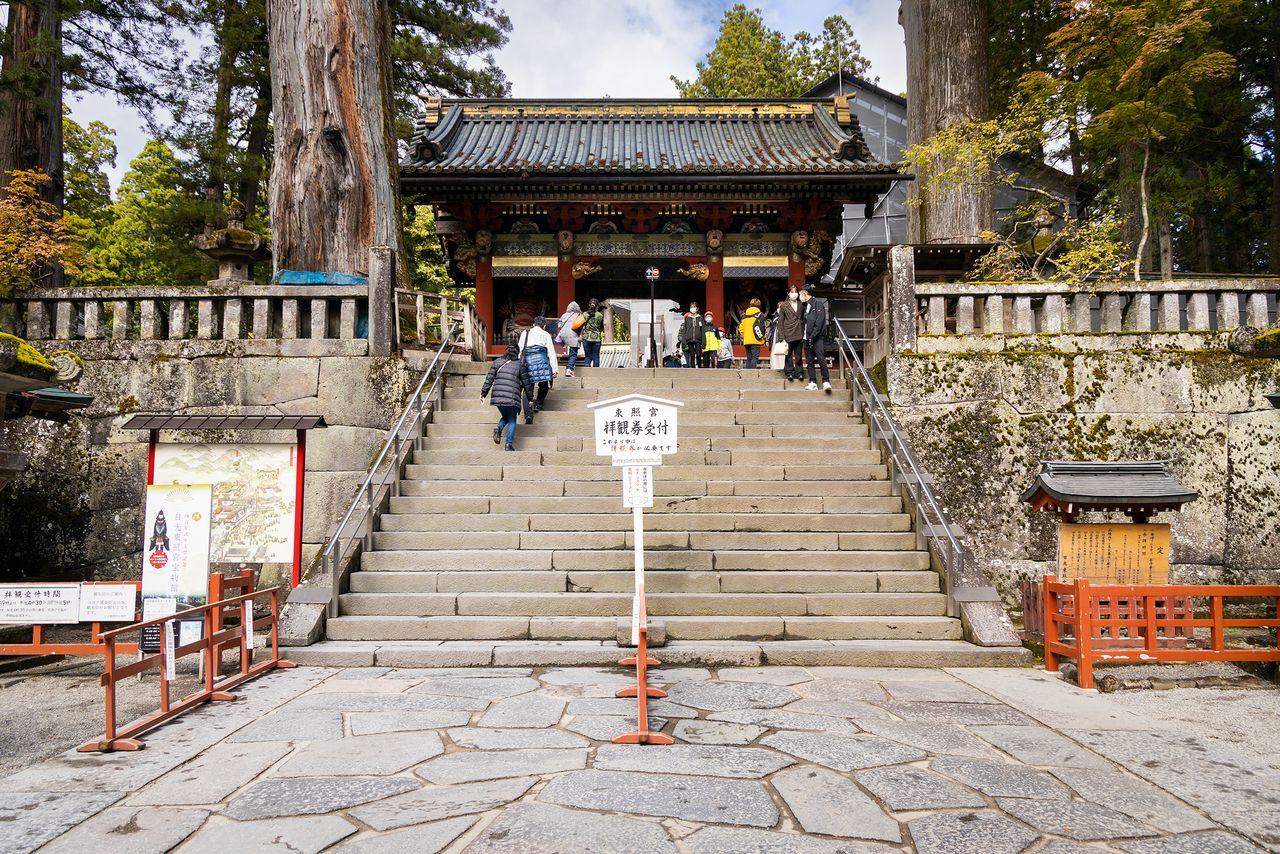 The shrine’s main area, requiring an entrance fee, begins past the Omotemon, an important cultural property. The gate is also known as the Niōmon, after the fierce-looking guardian deities standing on either side.

Once inside, visitors file past the sanctified stable, where a sacred white horse resides, and a storehouse holding ceremonial horse gear and costumes. The Yōmeimon, a lavishly decorated gate with over 500 carvings depicting fables and saints, then comes into view. This stunning structure is also a national treasure. The gate is topped by symbolic figures, including ogre-faced onigawara tiles, gaping-mouthed dragons, sacred beasts, and mythical hooved steeds that are thought to drive out evil spirits.

Yōmeimon is famous for its magnificence, but an ancient superstition fueled the belief that completing it might lead to the collapse of the Tokugawa regime. To avoid this inauspicious outcome, builders deliberately installed one of the twelve supporting pillars upside down, thus rendering the gate “incomplete.” 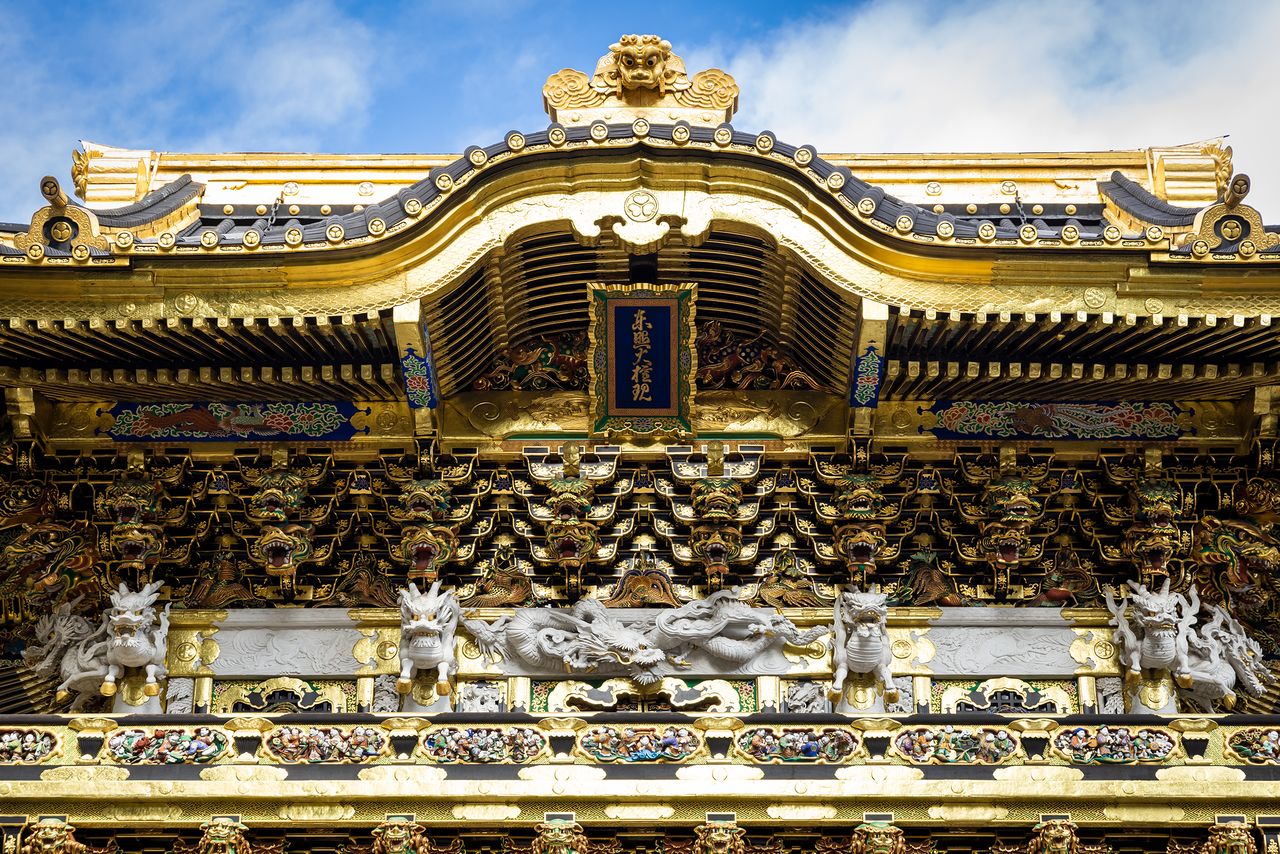 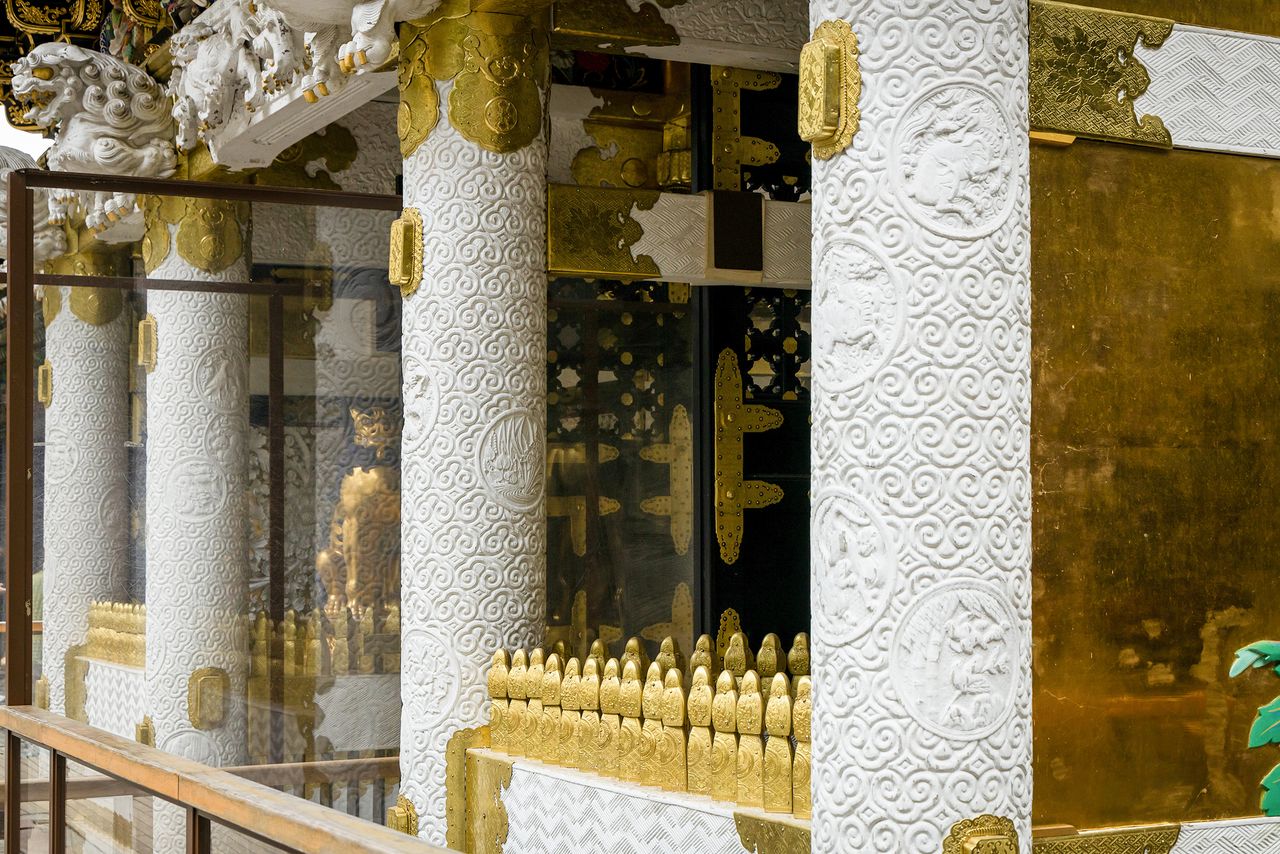 The second pillar from the right was deliberately reversed, its decorative motifs running in the opposite direction of the other pillars. 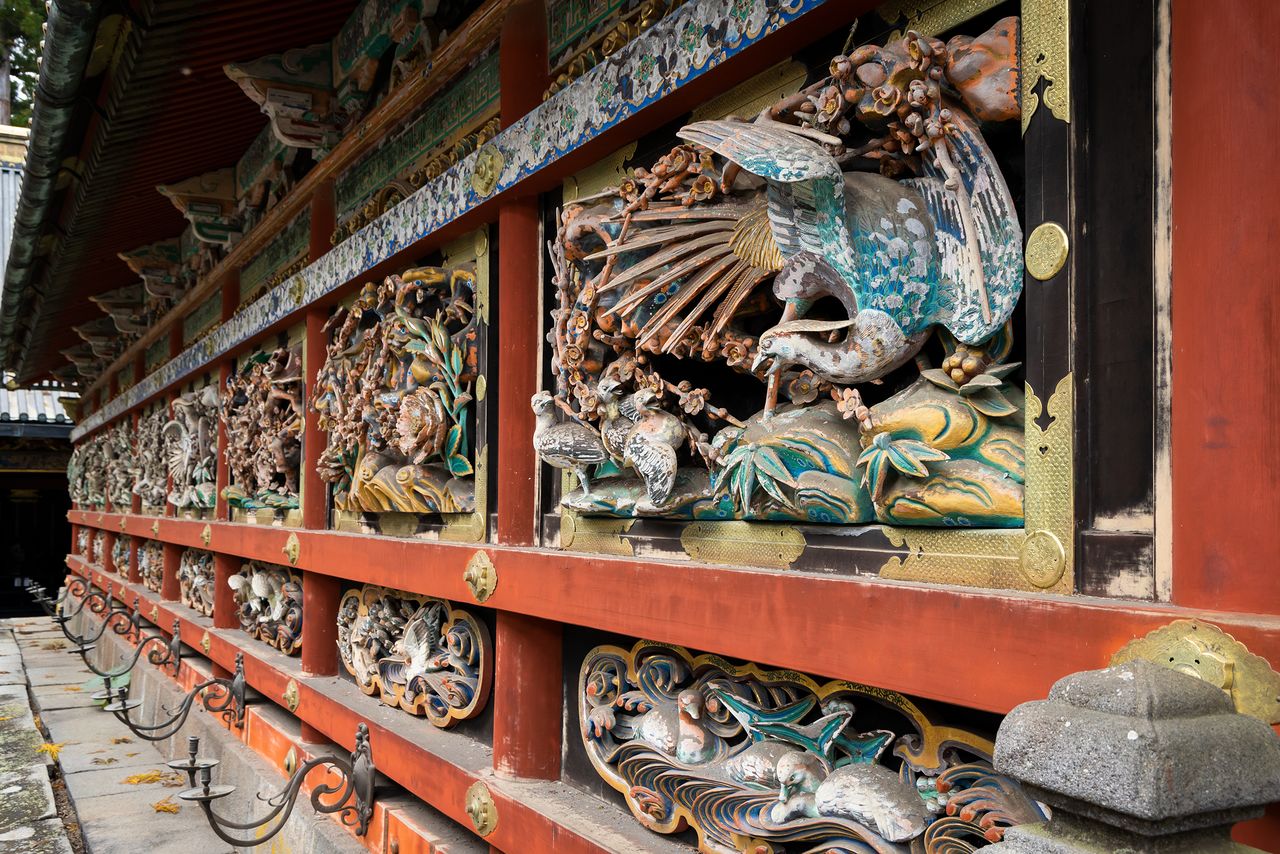 The corridors to the left and right of the Yōmeimon are also national treasures. Their vividly colored figures are all sculpted from single pieces of wood.

The heart of Tōshōgū is the gohonsha, consisting of the honden, haiden, and a stone-floored passage that acts as a symbolic intermediary space between the buildings. These structures are national treasures, as is the Karamon, the ornately decorated gate protecting the gohonsha. Various ceremonies take place in these halls, which are decorated with carvings depicting emissaries offering New Year greetings to their leader. The ghostly-white figures are painted with gofun pigment made from crushed clamshells.

To the right, along the latticed sukibei adjoining the Karamon, is another prayer hall called the kitōden. Here, visitors remove their footwear before entering the haiden to worship. The honden is not open to visitors, but it contains paintings by noted artist Kanō Tan’yu (1602–1674) and nearly 2,500 carvings. 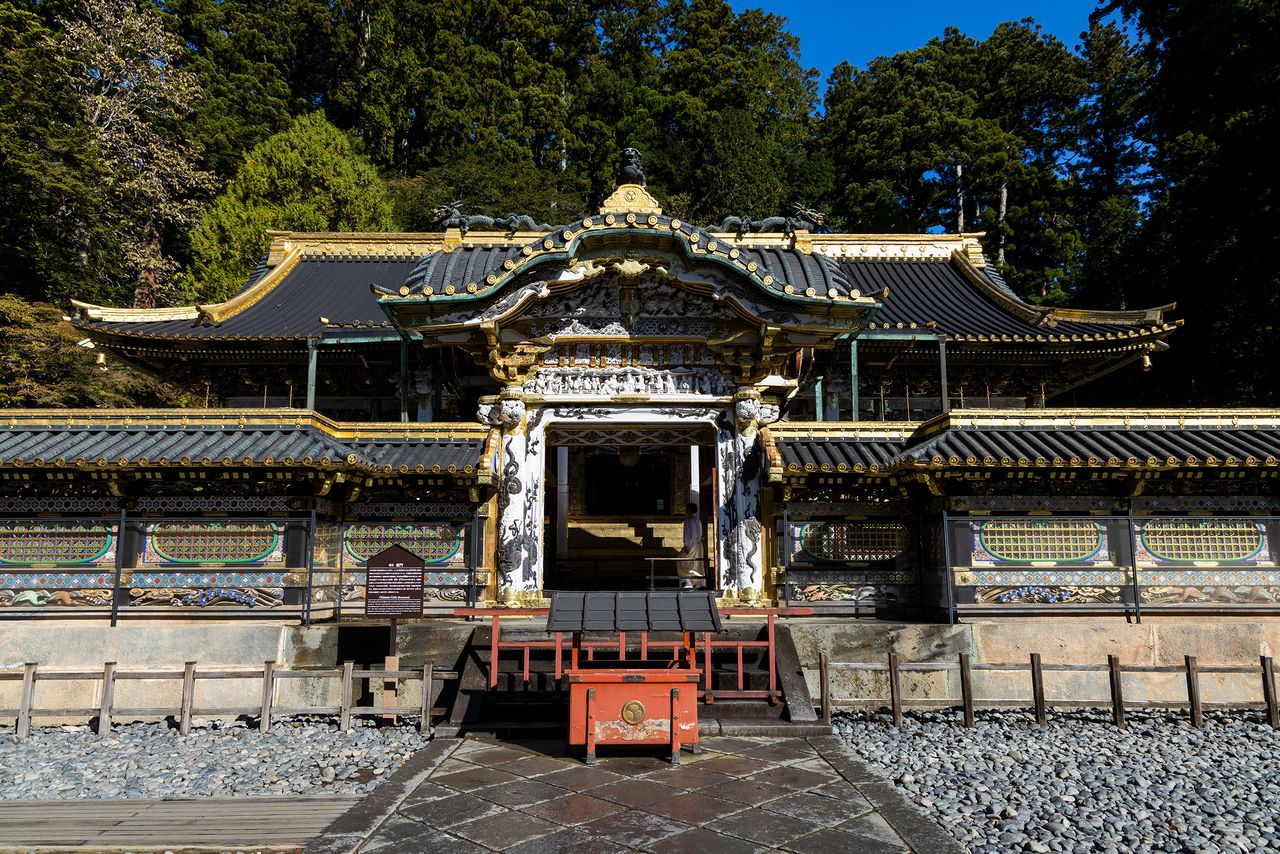 Beyond the Karamon lies the gohonsha, entered beyond the gate to the right. 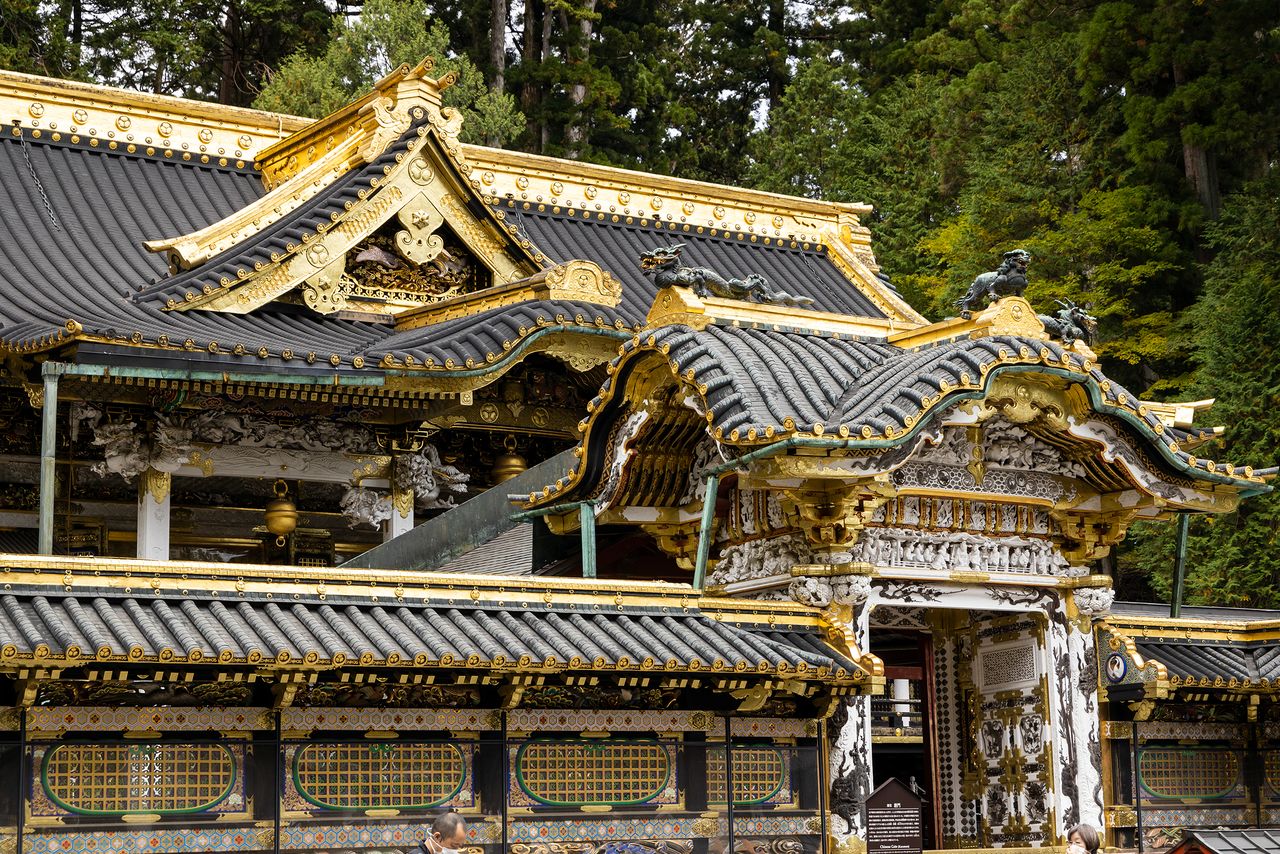 The Karamon is also elaborately decorated, as are the interiors of the honden and the haiden.

The route to the okumiya where Ieyasu lies is through the Sakashitamon and up a flight of 207 steps. The path to the tomb is lined with tall trees and exudes a tranquil atmosphere quite different from the mood created by the opulently decorated main shrine buildings. The okumiya, also known as the okusha, consists of a prayer hall, the Inukimon, and the tomb itself, as well as a torii and a pair of komainu statues, all of which are designated important cultural properties. 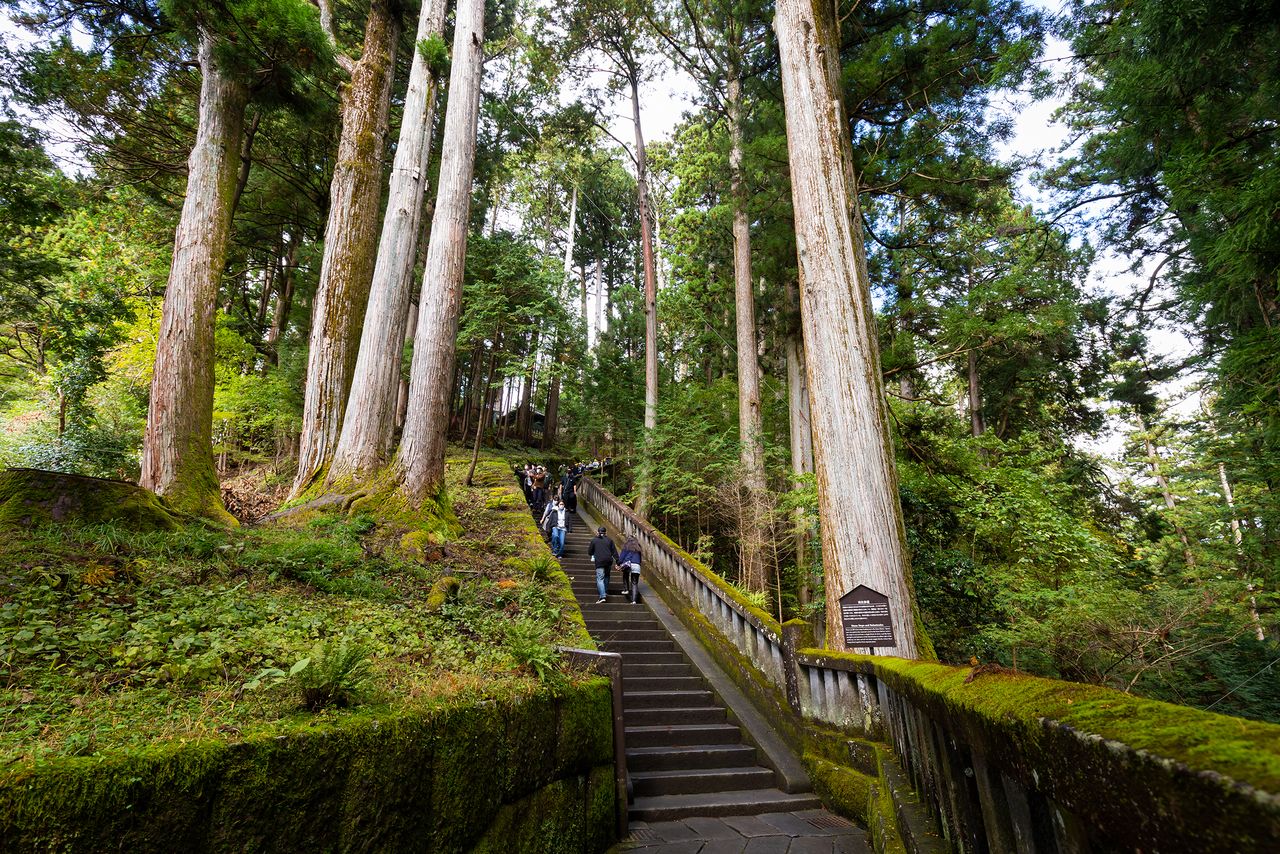 A hush envelops the path leading to the okumiya. Each of the 207 steps to the summit is fashioned from a single stone. 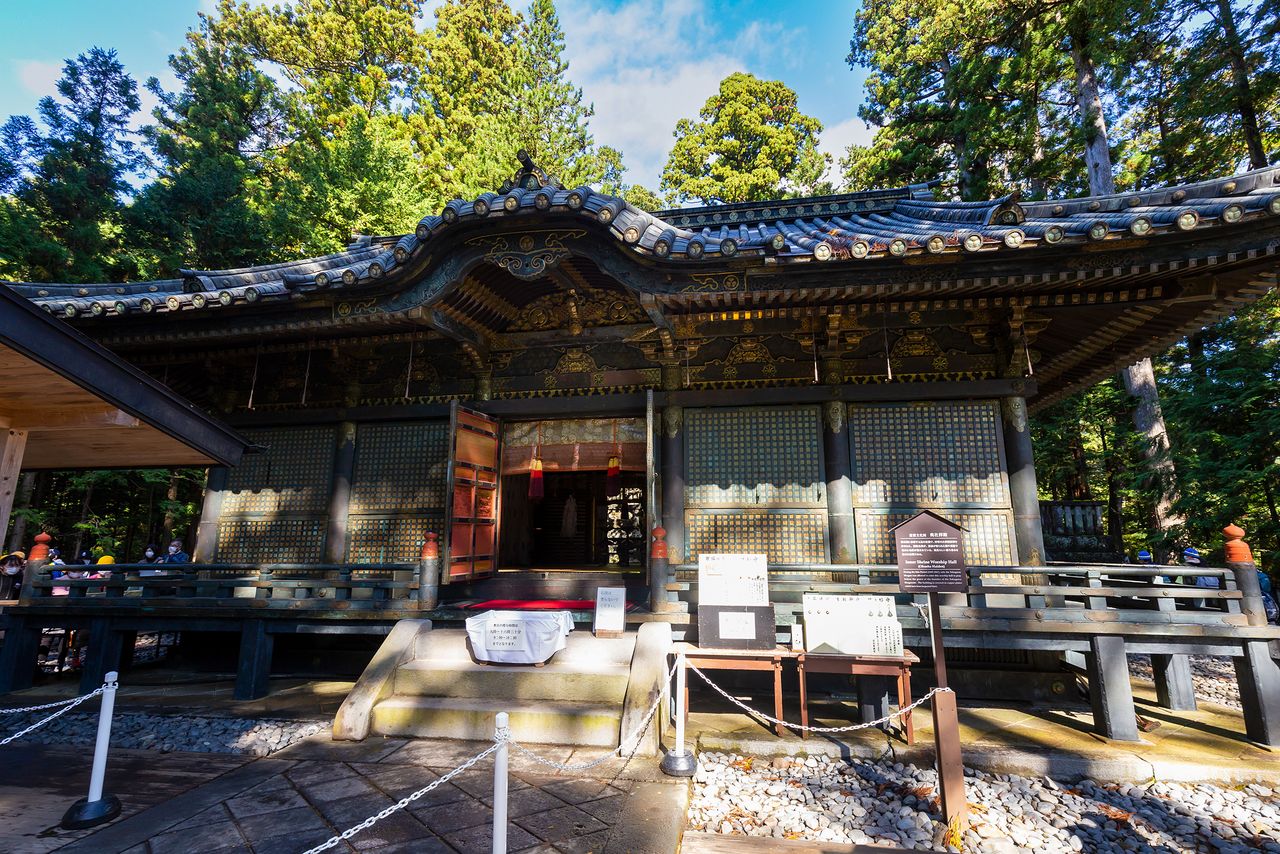 The okumiya’s prayer hall is an important cultural property. The Inukimon and Ieyasu’s tomb are behind the building. 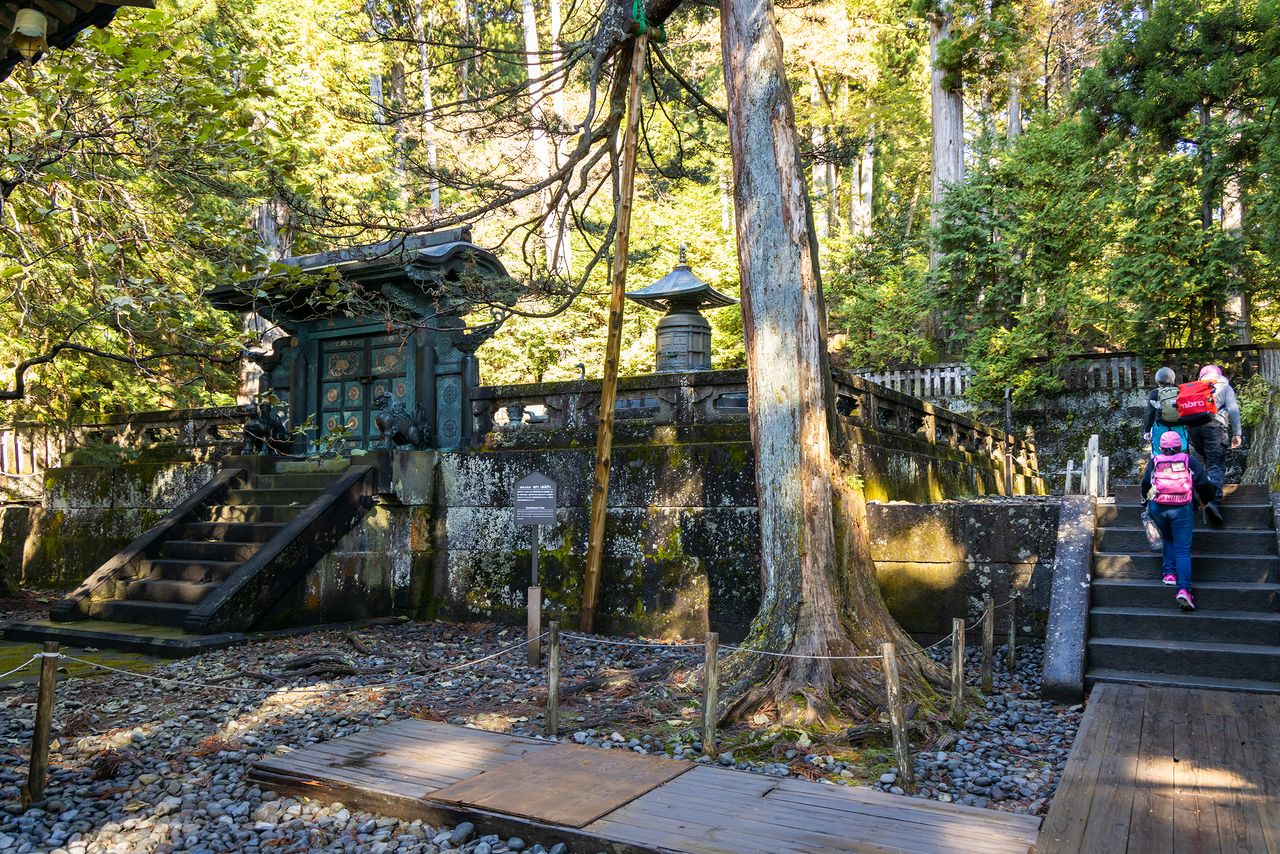 Except for its door, the stately Inukimon was cast from a single mold.

Amid the profusion of carvings at Tōshōgū, over 5,000 in all, two attract particular attention. The first of these is the famed monkey trio “See no evil, speak no evil, hear no evil” that adorns the sacred stable. Monkeys are said to protect horses, and the carving of mizaru, kikazaru, and iwazaru is a satire on human existence, providing a prudent lesson on how to enjoy a safe and happy life. 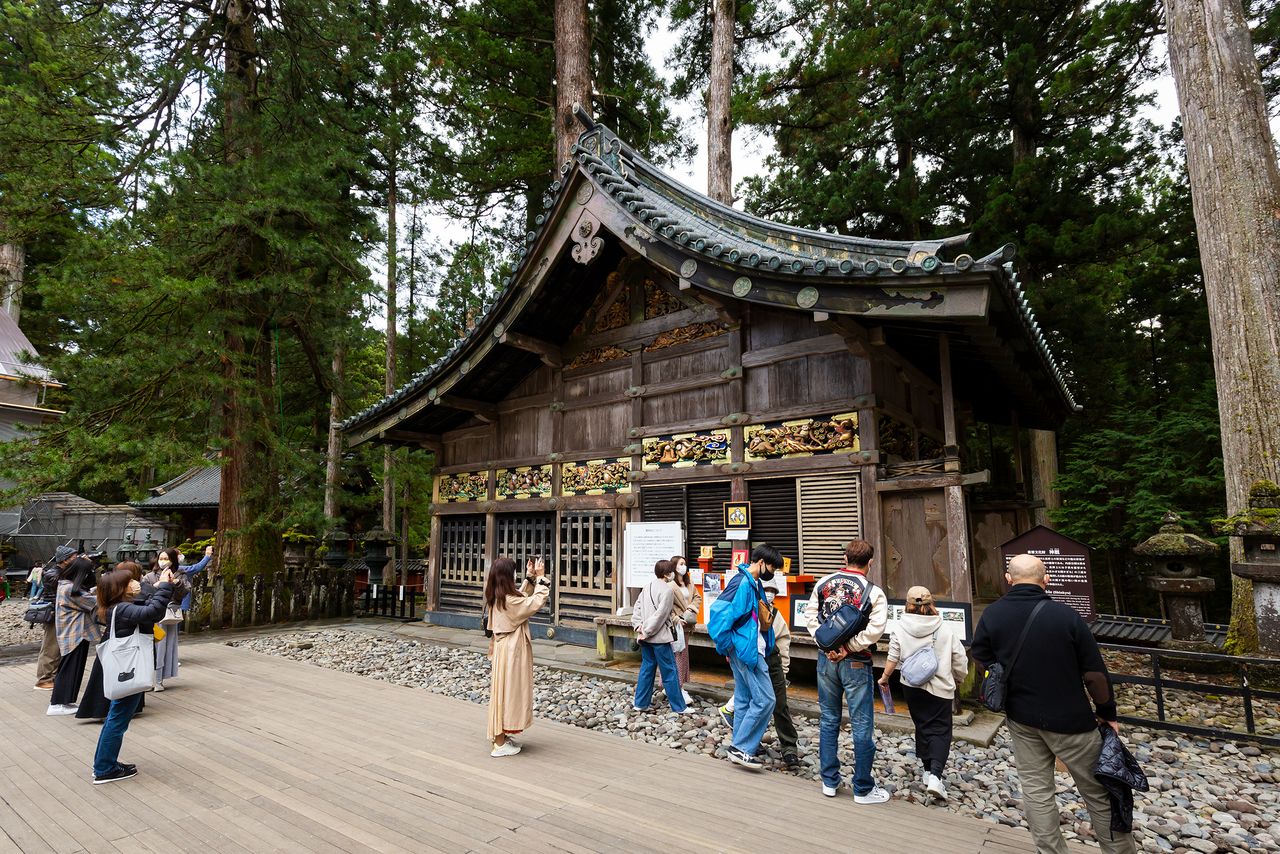 Many visitors stop to photograph the sacred stable and the carving of the three monkeys. 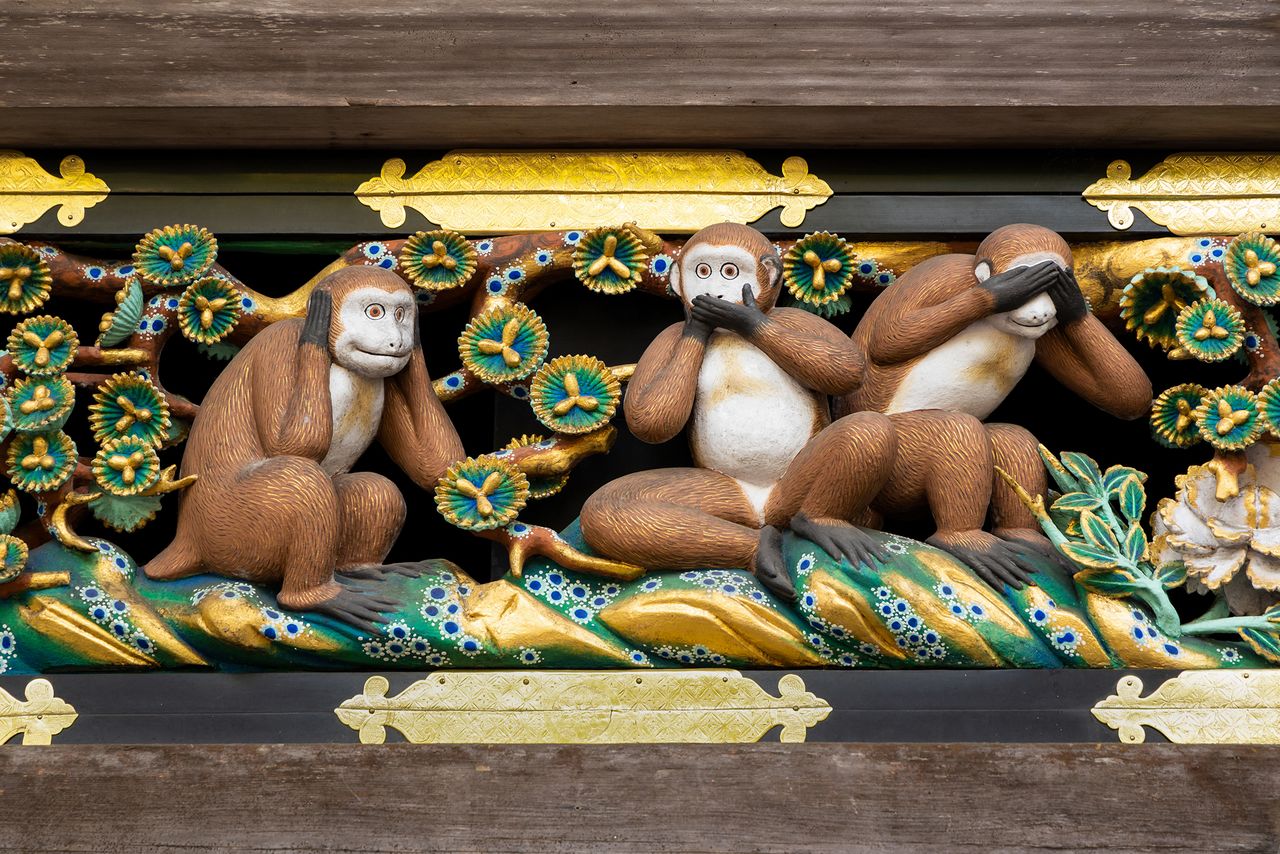 The second carving is that of a sleeping cat, attributed to master carver Hidari Jingorō, in the corridor leading to the Sakashita Gate. On the reverse side is a carving of a sparrow, with the meaning being that the bird is safe as long as the feline remains asleep, an allegorical reference to peace throughout the land. But closer observation reveals that the cat’s eyes are not completely closed and its paws appear to be firmly planted, which some interpret as meaning that the cat is only pretending to sleep and is poised to spring into action. 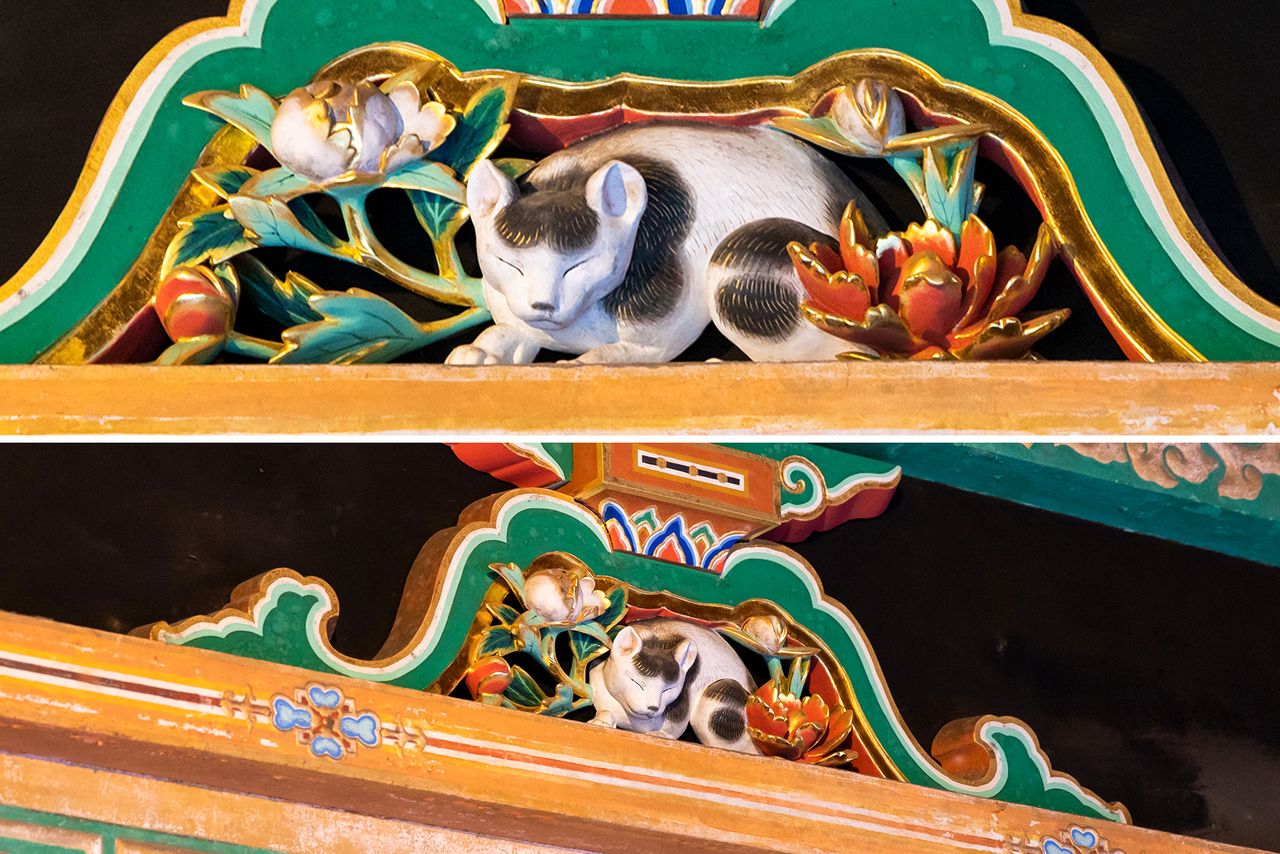 When viewed from the front, the cat seems to be sleeping, while from the side, it looks as though it is stalking prey. 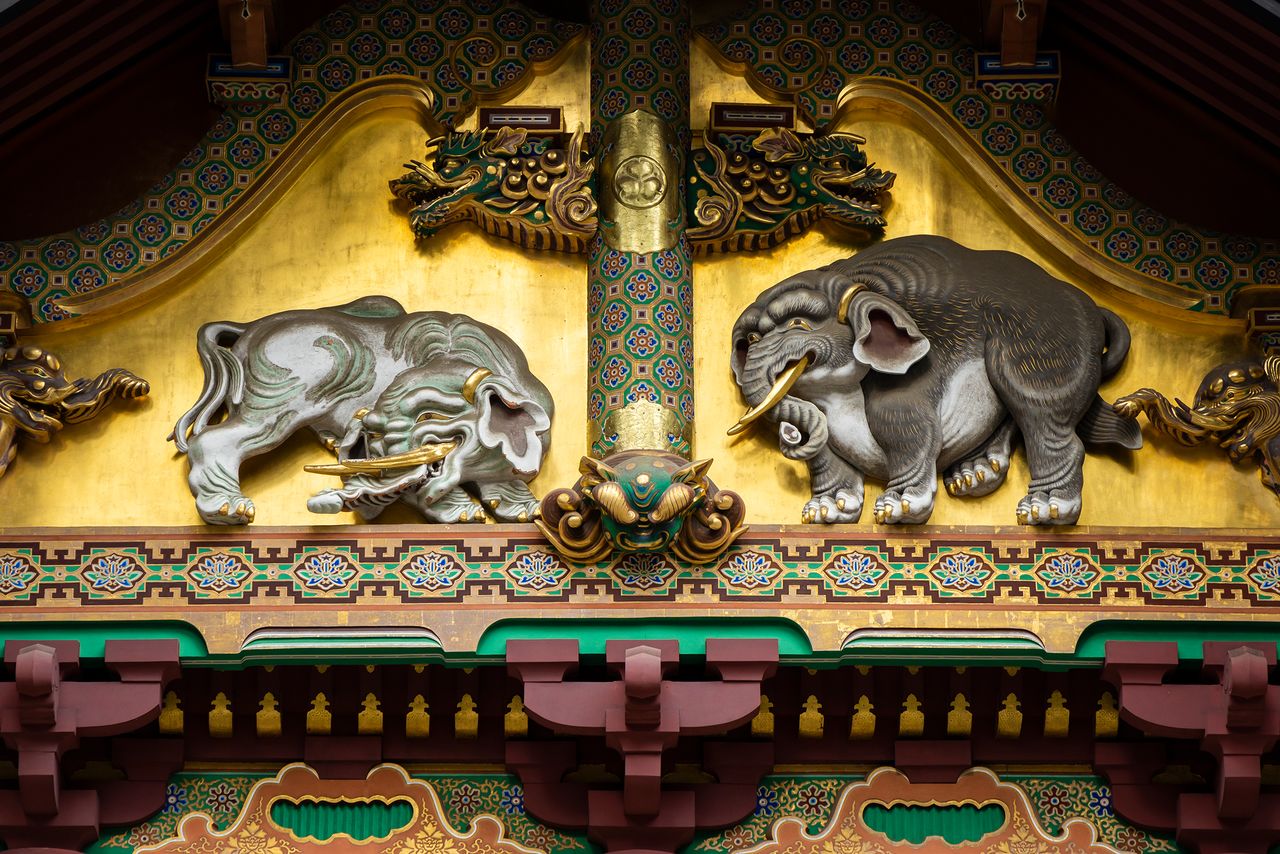 Many visitors also stop at the Kami Jinko upper storehouse to view the carvings of the imaginary elephants, so named because the sculptor who created them had never actually seen the beasts.

Nikkō was known as a holy place even before Tōshōgū was built, and recently, the site has started to draw the interest of people in search of the spiritual.

The Karadō torii, in front of the stone stairs leading up to the Yōmeimon, is said to have especially powerful spiritual reverberations. Positioned so that it sits directly in line with Polaris, it also known as Hokushinmon, the polar star gate. Looking directly north, one can see that the Karamon, the haiden, and the honden are aligned with it, in keeping with the teachings of Myōken, a Buddhist deification of the North Star. The Karadō torii stands at the southern end, and accordingly it is known as the start of the road to the polar star. Standing so that the torii frames the Yōmeimon is said to be especially effective for winning divine favor.

Ieyasu’s tomb in the okumiya is another favored spot for seekers of the spiritual. The kanaesugi, a large cedar that stands over the site, is reputed to have the power to grant wishes, and there are sometimes lines of people waiting to approach it. The path leading to Futarasan Shrine, the kamishinmichi, is another spot known for spiritual energy.

No matter the reason for traveling to Nikkō, though, spending the day visiting the World Heritage site will surely bring peace and tranquility to visitors’ hearts. 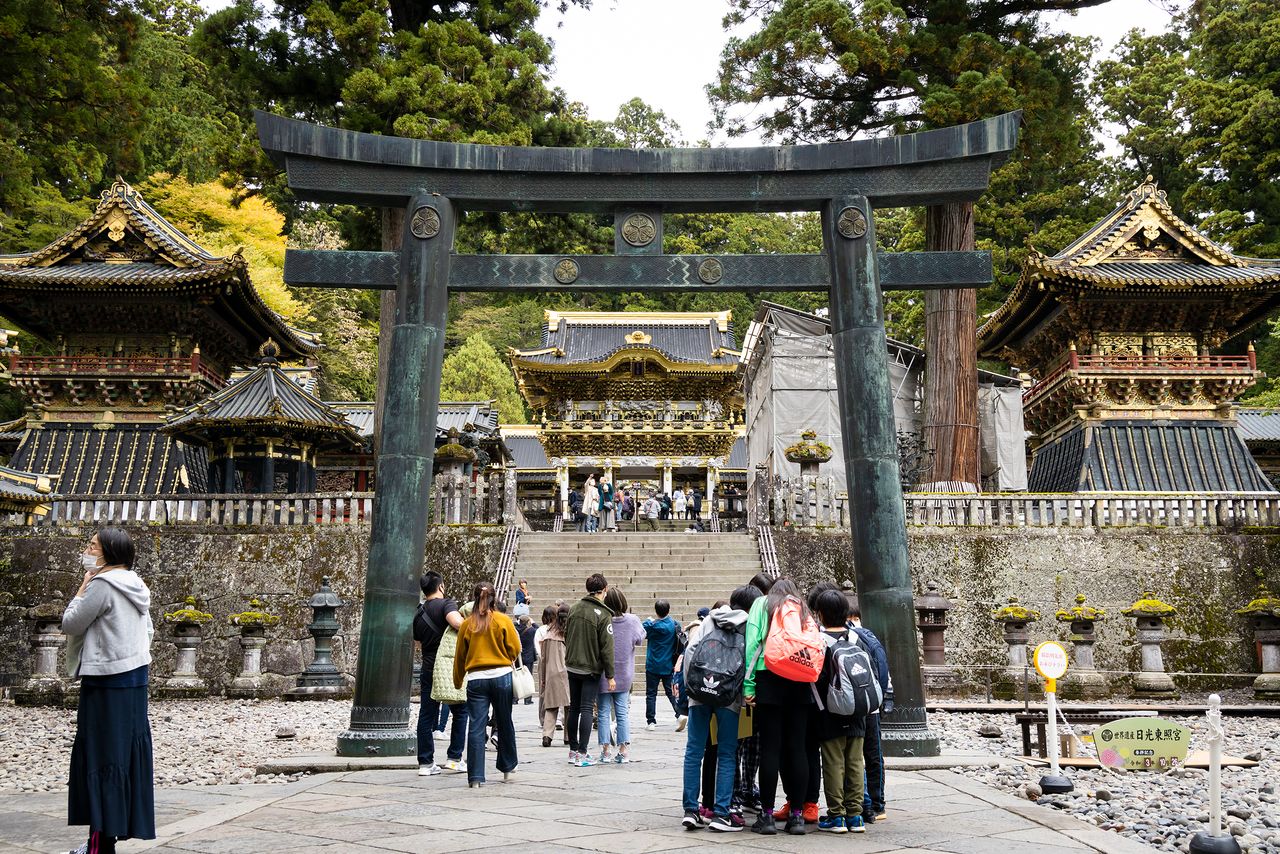 The Karadō torii is an important cultural property. The saying goes that visitors can win divine favor if they stand in such a way that it frames the Yōmeimon. 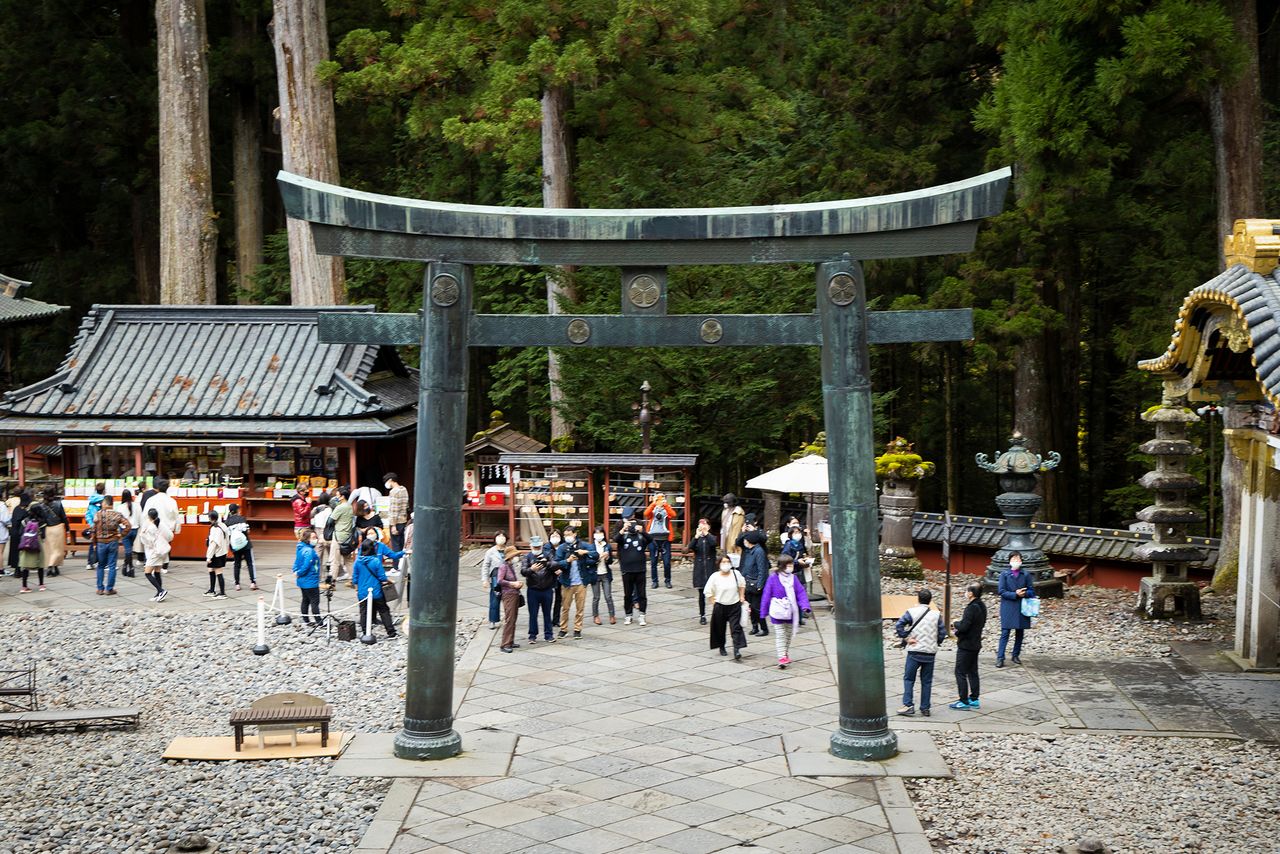 The torii viewed from the Yōmeimon. 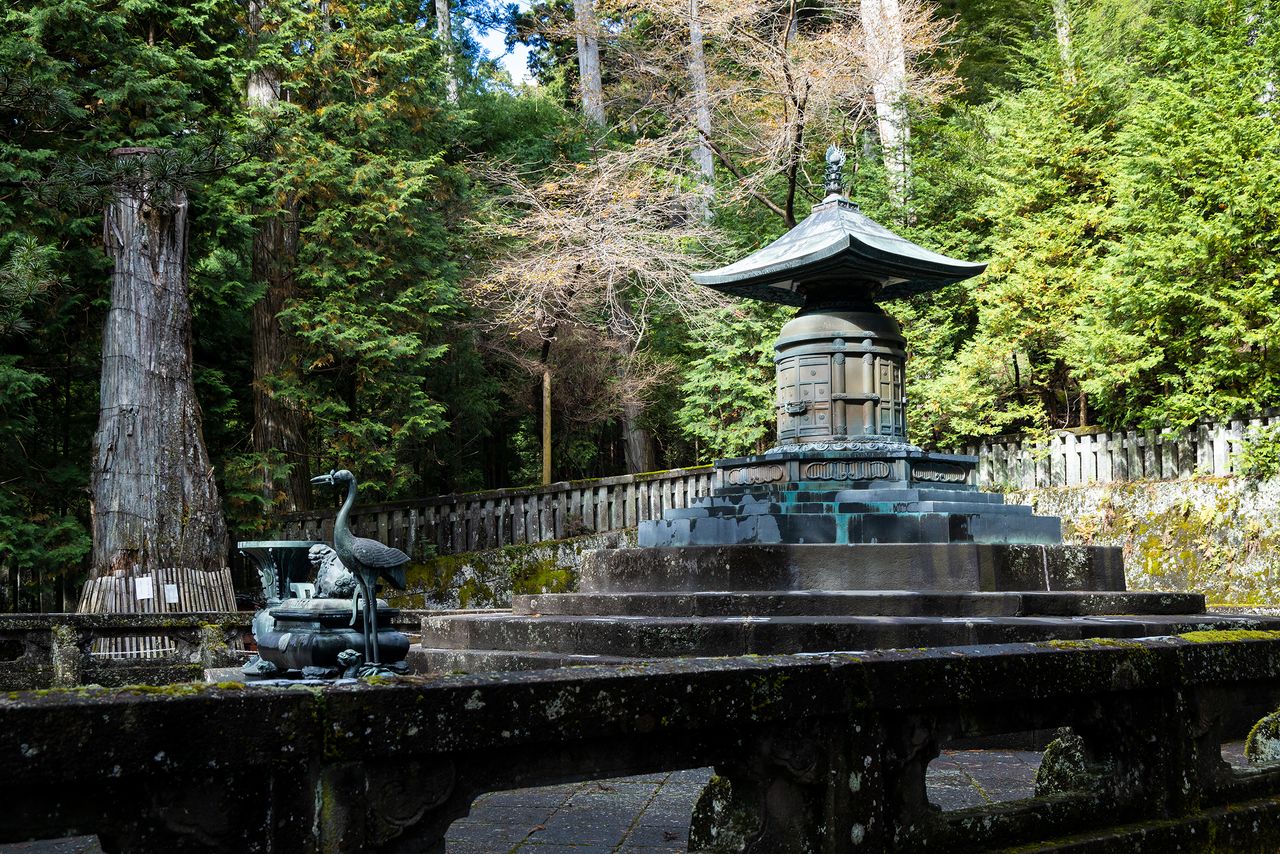 The large cedar to the left of the crane-shaped candlestick is known as kanaesugi. Its age is unknown, but it was standing even before the shrine was built. 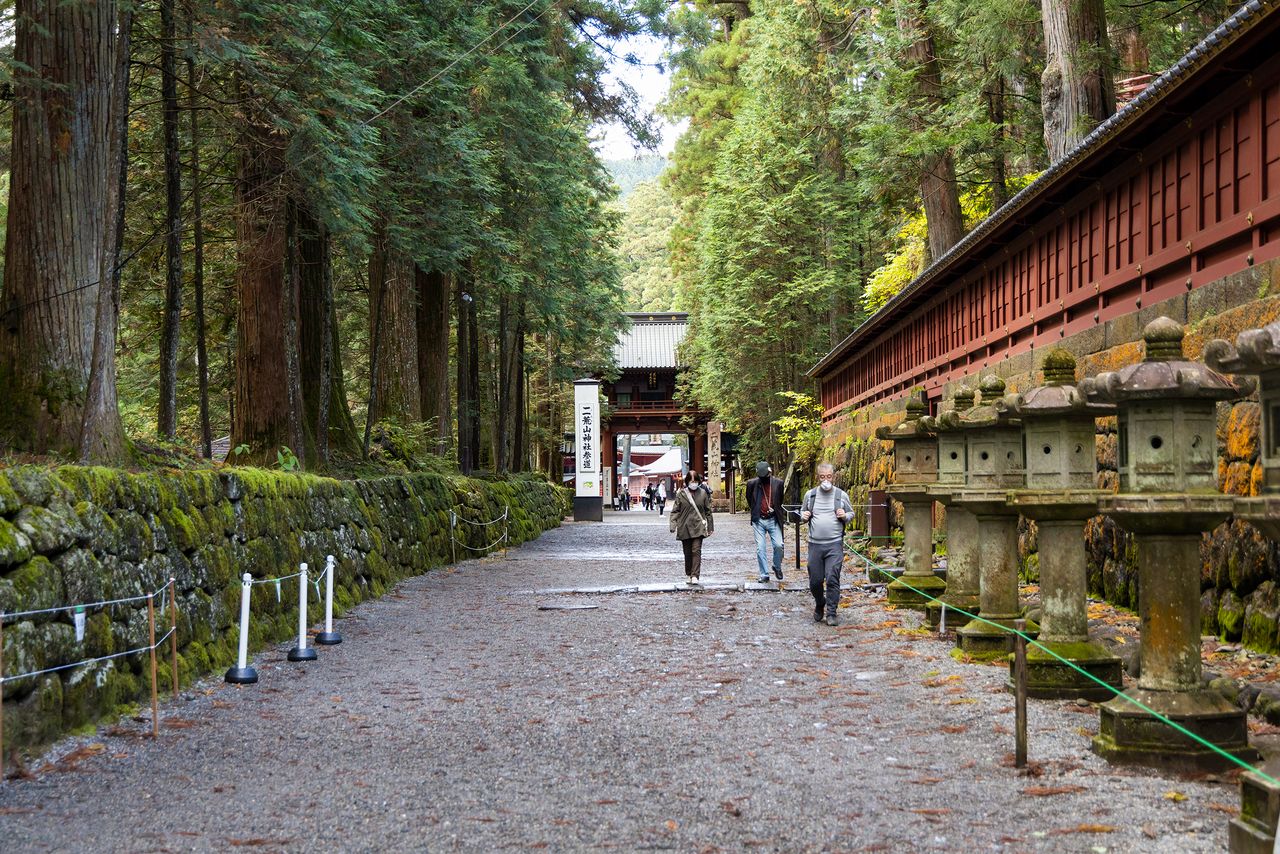 The kamishinmichi leads to Futarasan Shrine, visible in the background.