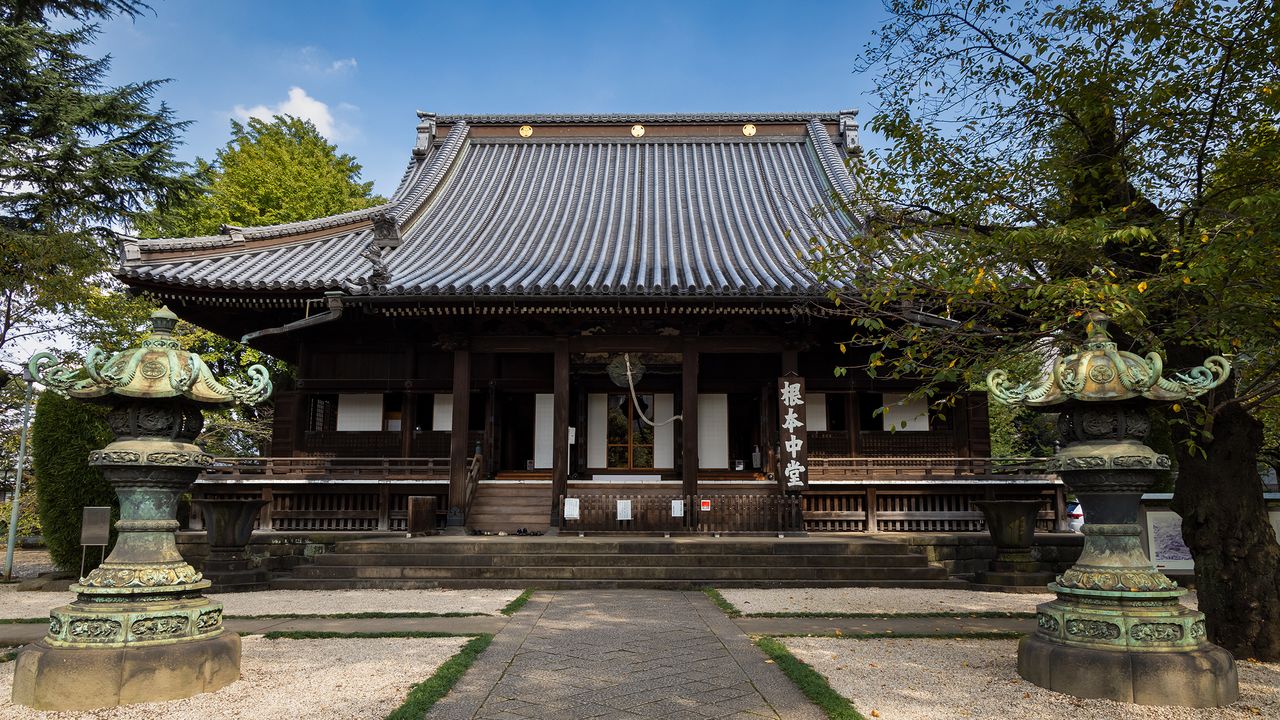 The History of Kan’eiji and Ueno Park

Travel History Jan 21, 2022
In its heyday, the Buddhist temple Tōeizan Kan’eiji, one of the capital’s most famous temples, occupied the entire site of today’s Ueno Park. We share images of the temple’s main hall, the tombs of six Tokugawa shōguns, and other attractions not open to the public in this article.

Tokyo’s Ueno Park, one of the country’s premier cherry blossom viewing spots, offers a wealth of recreation options ranging from a zoo to museums and concert halls. Home also to the Tokyo University of the Arts, adjacent to the park, Ueno is known as both a cultural mecca and a prime sightseeing destination for visitors from home and abroad.

According to temple priest Ishikawa Ryōgaku, most visitors to Ueno Park are unaware that the temple precincts once encompassed the whole area. The temple was founded by the monk Tenkai (1536–1643), of the Tendai school of Buddhism, who counted the second and third Tokugawa shōguns Hidetada and Iemitsu among his adherents. The temple covered an area of more than a million square meters and received an allowance of 15,000 koku (over 2.2 million kilograms) of rice per annum, the same as the stipend given to minor daimyō. 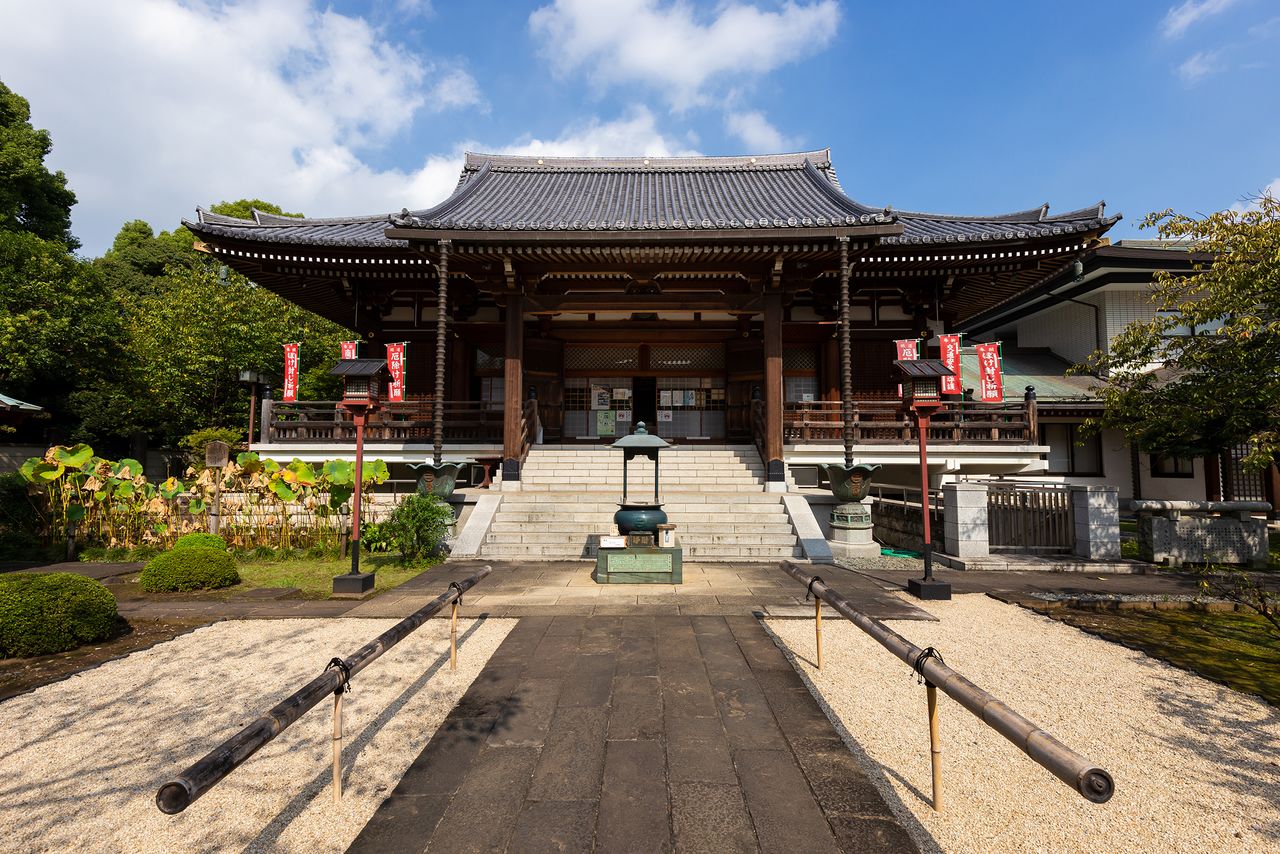 Kan’eiji today adjoins the northern end of Ueno Park and includes a cemetery with the tombs of six Tokugawa shōguns. Although the temple grounds are only one-tenth their former size, Ishikawa asserts that Ueno Park continues to fulfill the aspirations of Tenkai, the temple’s founder.

“The precincts of Kan’eiji, you see, were Japan’s first leisure destination. Originally, the shogunate planned a major project to construct an eastern version of the temple Hieizan Enryakuji, the head temple of the Tendai school that stands to this day in Shiga Prefecture. When Kan’eiji was built, the temple’s main hall occupied the site where the fountain plaza and the Tokyo National Museum stand today. This was as the shogunate planned, but Tenkai also created a recreation spot for the general public to the south of that area.”

In 1625, when Kan’eiji was built, Edo was still a growing metropolis. Theaters and other amusements were scarce, and Edo residents had little leeway to travel on pilgrimages to the major temples of Kyoto and Shiga, a common leisure activity at the time.

To make up for this, Tenkai had the Kiyomizu Kannondō, modeled on the famous gallery of Kyoto’s Kiyomizudera, and the Ueno Daibutsu, copied from the Great Buddha at Hōkōji in Kyoto, erected on the temple grounds. Other copies of famous landmarks were also created: Shinobazu Pond evoked Shiga’s Lake Biwa and the Bentendō on the pond’s small island was a replica of a site worshipping the deity Benten on Chikubushima, an island in the great lake. Tenkai also had cherry trees like those of Nara’s Mount Yoshino and other seasonal greenery transplanted. As a result, Ueno became a year-round leisure destination. It was here that the Edo culture of flower-viewing was born. 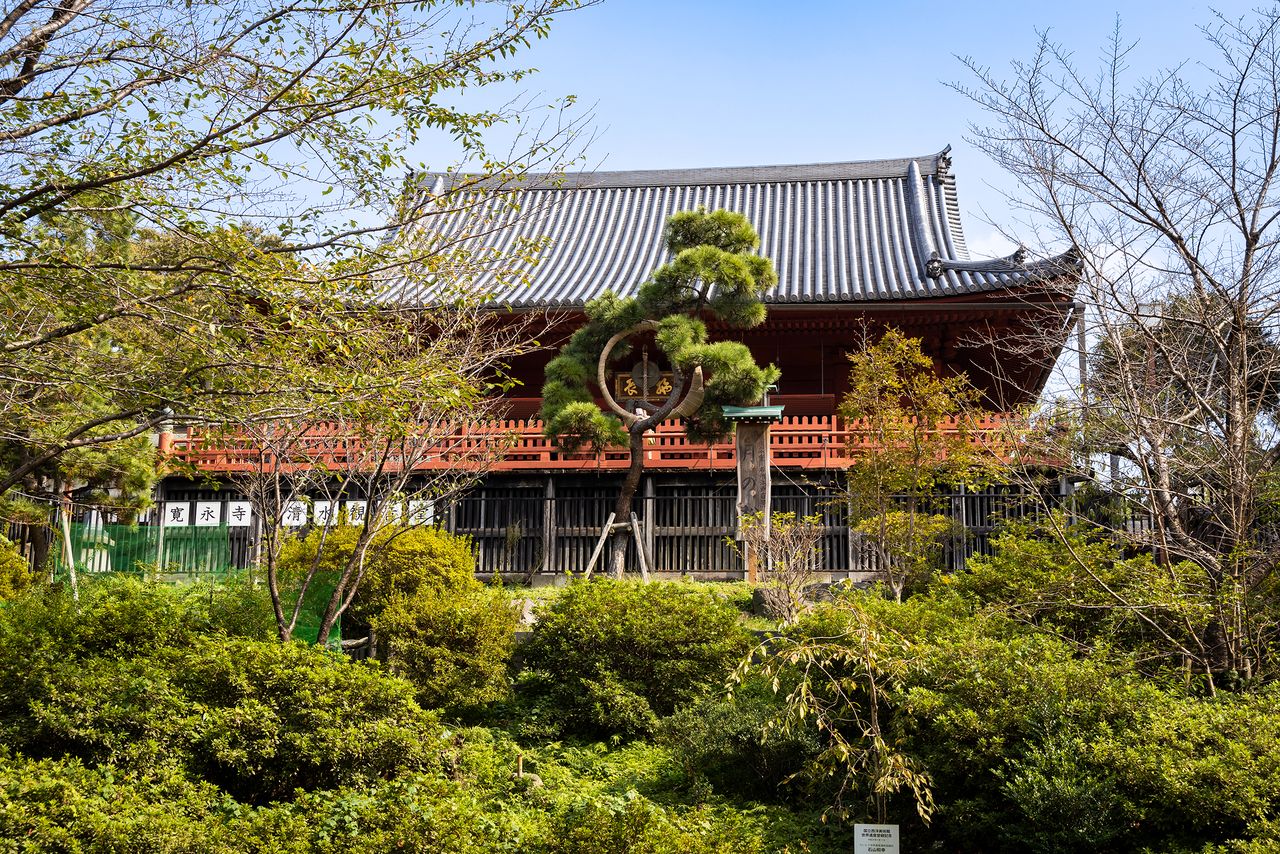 Kiyomizu Kannondō, built on a slope near Shinobazu Pond, and the famous Tsuki no Matsu “moon pine,” whose trunk, trained into a circular shape, frames the Bentendō. 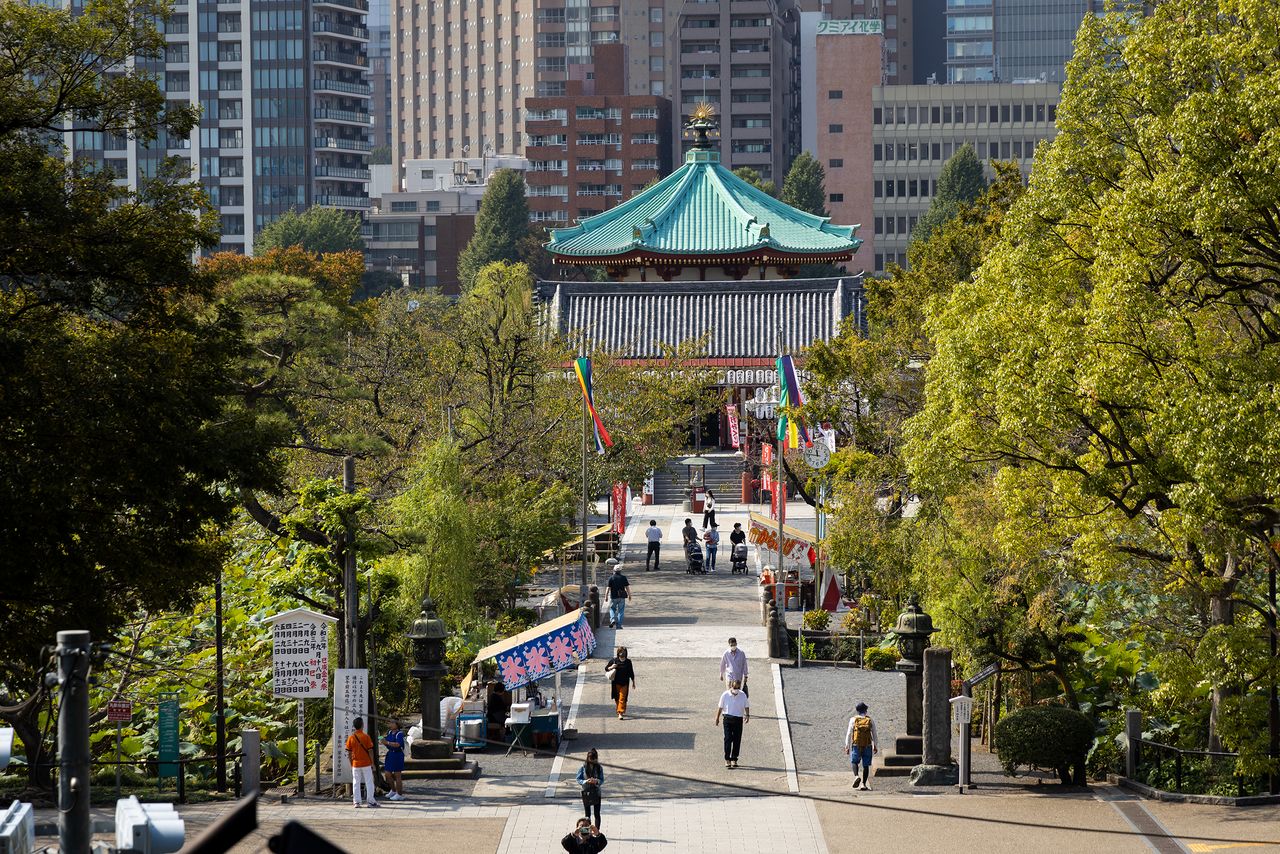 The Bentendō, built on an island in the pond, was originally reached by boat. Due to the large crowds wishing to worship there, a bridge providing access was built later.

“Tenkai believed that everyone was equal in the eyes of the Buddha. At a time when only the powerful and the rich had access to recreational spaces, his plan was to create an area that the common people could enjoy and where they could also learn more about Buddhist teachings. Kan’eiji was also in possession of many written documents, so it offered schooling as well. Ueno Park has truly inherited the cultural and leisure aspects that Tenkai intended.” 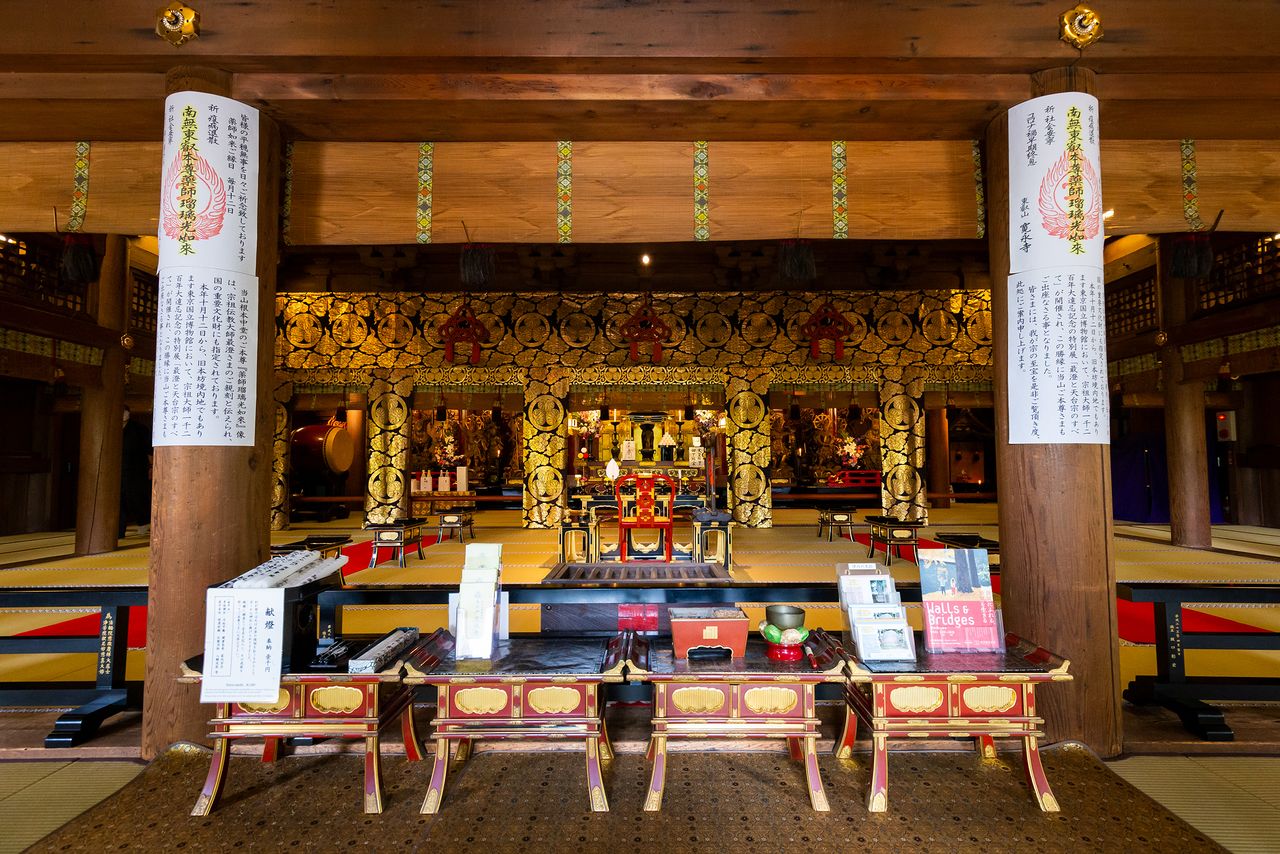 The interior of the Konponchūdō. In keeping with the belief that all creatures are equal, the Buddha’s gaze meets the eyes of worshippers.

The temple’s formal name, Tōeizan Kan’eiji, is indicative of its status as one of Edo’s most influential religious establishments. Tōeizan means “the Mount Hiei of the east,” Mount Hiei in Shiga Prefecture being the site of Enrykuji, head temple of the Tendai school, while Kan’ei comes from the Kan’ei era, the years during which the temple was built. At the time, no temple could use an era name without permission from the imperial court, and only a few other such examples, such as Enryakuji and the Kyoto temples of Ninnaji, Kenninji, and Kenchōji, are extant today.

Beginning with the third chief abbot and up to the end of the shogunate, Kan’eiji’s heads came from the male imperial line and were known as Rinnōji-no-Miya. They also served as chief abbots at the temple Rinnōji in Nikkō, site of Tōshōgū, the shrine dedicated to Tokugawa Ieyasu, and at Enryakuji, signifying Kan’eiji’s power and prestige as a religious institution throughout the Edo period (1603–1868). 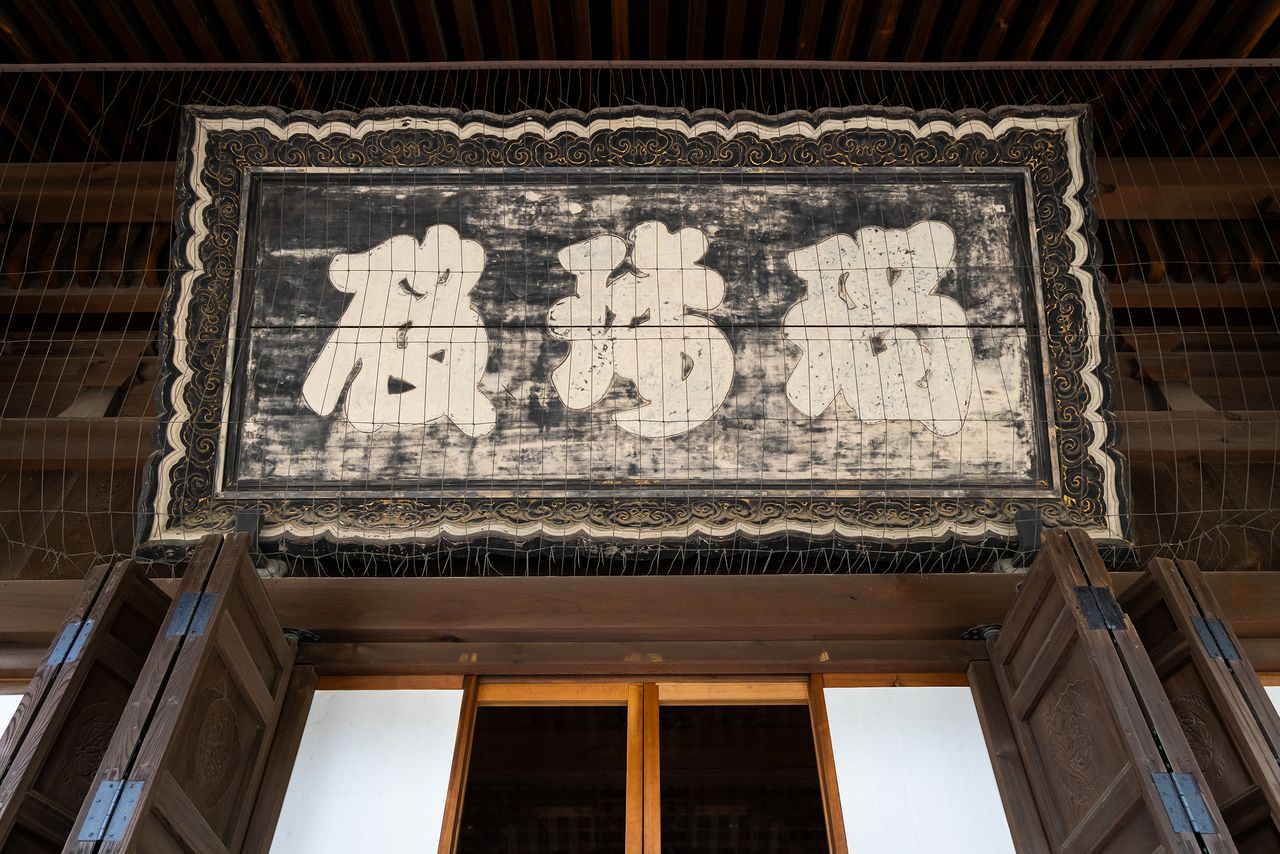 This plaque at the Konponchūdō displays the script of Emperor Higashiyama (r. 1687–1709). By coincidence, a huge conflagration broke out in Edo the day the plaque arrived from Kyoto.

Ueno, northeast of Edo Castle, was selected to be the site of Kan’eiji to provide protection from what was believed to be an inauspicious direction. This again follows the Enryakuji model, Enryakuji being located northeast of Kyoto to protect the ancient capital. Around the time of planning for the construction of Kan’eiji, the ground at Ueno had been leveled to prepare for building suburban residences for three daimyōs. Instead, the land was donated to the temple.

Kan’eiji was one of two Tokugawa clan family temples, the other being Zōjōji in the Shiba district of Tokyo. Each is the final resting place of six Tokugawa shōguns. Funeral rites for Iemitsu, the third Tokugawa shōgun and a devout follower of Tenkai, took place at Kan’eiji. Later, in accordance with his last wishes, a mausoleum was erected for him in Nikkō, next to Tōshōgū where his grandfather Ieyasu was enshrined. After the burial of Ietsuna, the fourth shōgun, at Kan’eiji, five other Tokugawa shōguns were also laid to rest in tombs constructed there. 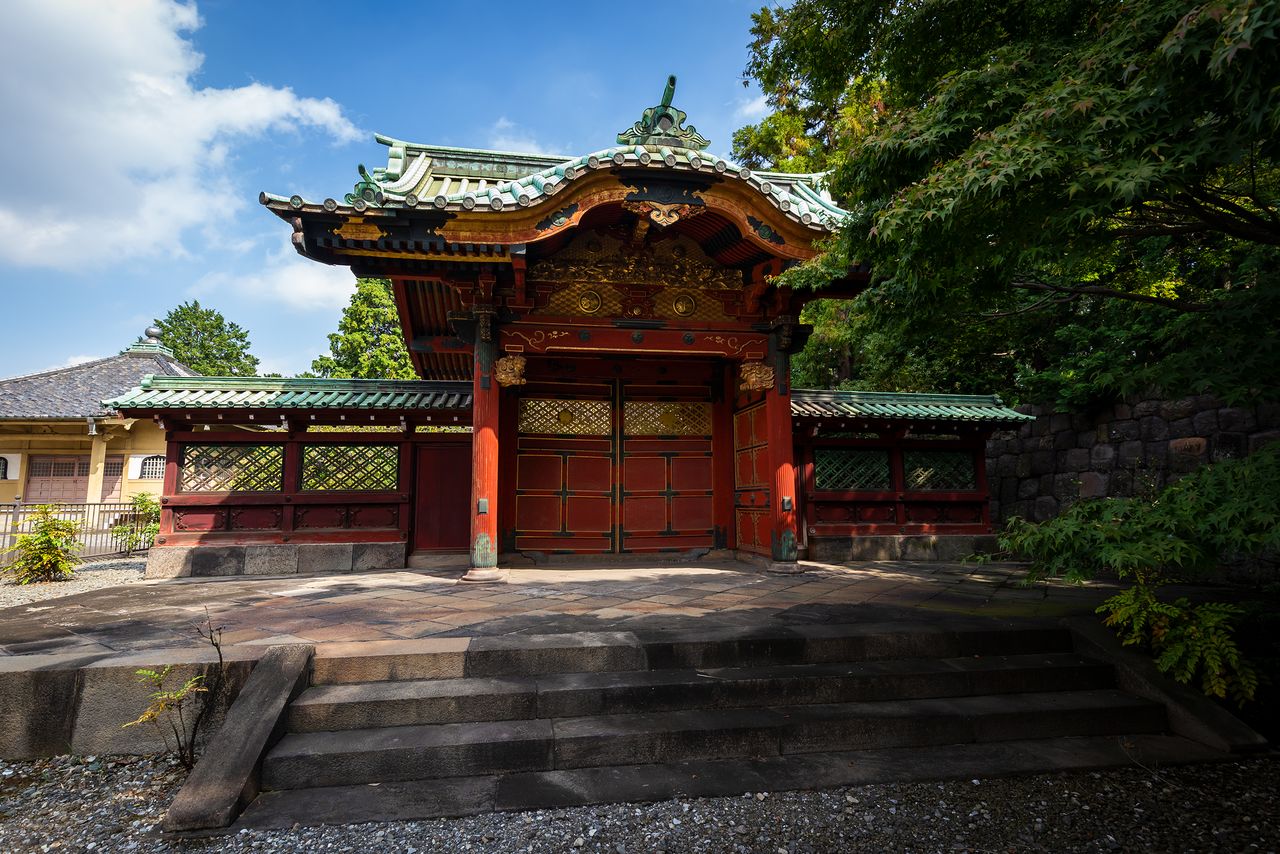 A gate bearing the plaque of the fifth Tokugawa shōgun Tsunayoshi, which survived nineteenth-century civil conflict and wartime air raids. At the rear to the left, the building housing the Tokugawa mortuary tablets is visible. 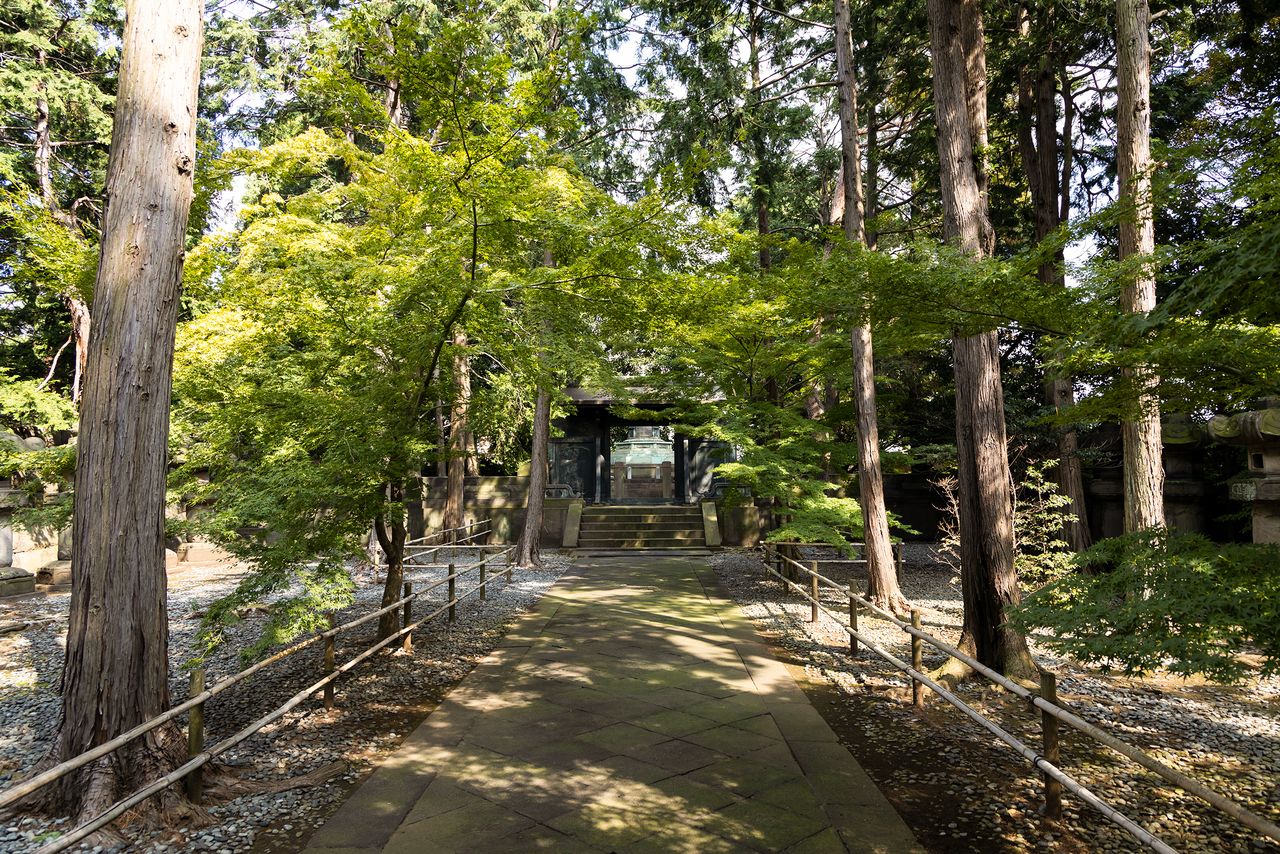 The tranquil atmosphere of the path leading to the Tokugawa tombs belies their location in bustling Tokyo. 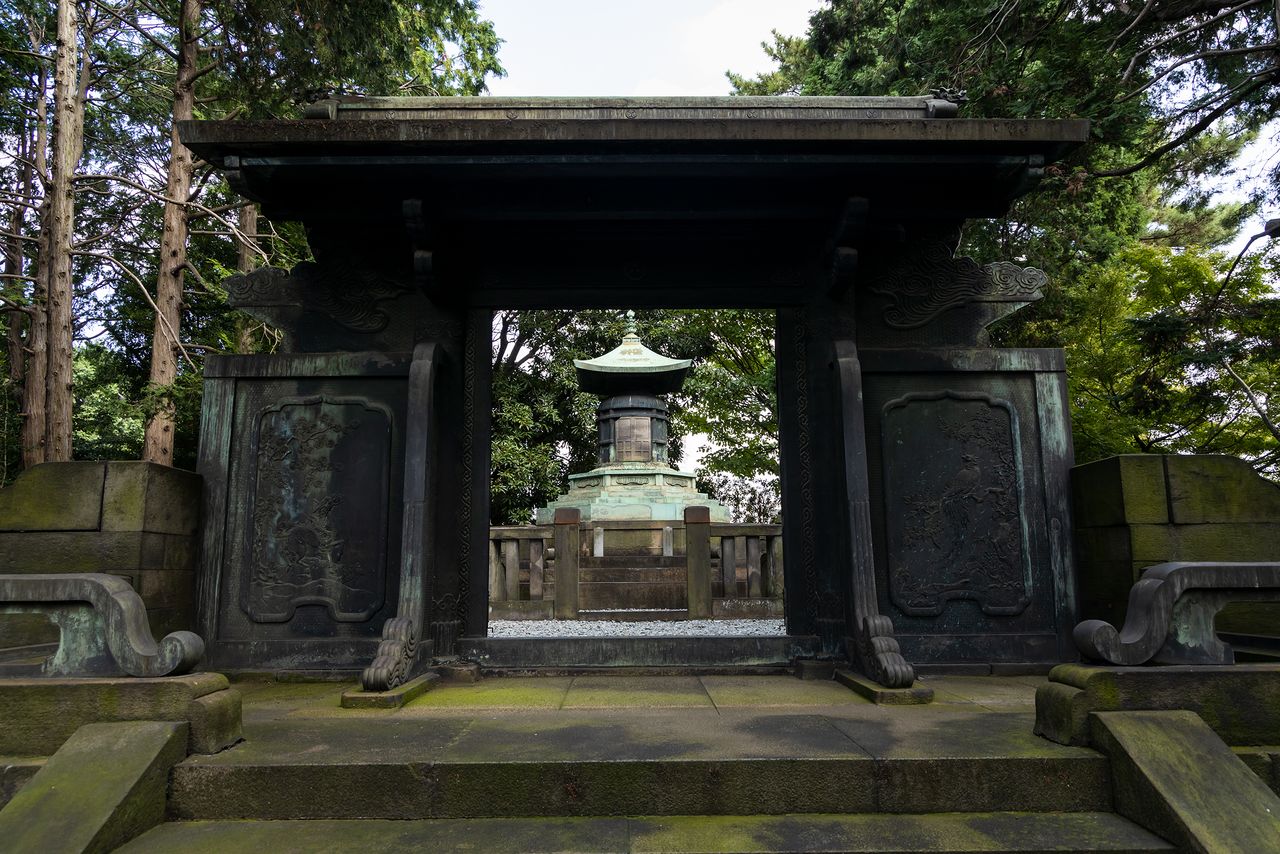 The copper pagoda-shaped tomb of Tsunayoshi. The tombs of the six Tokugawa shōguns resting at Kan’eiji came through wartime fire bombings unscathed.

After Yoshinobu, the last Tokugawa shōgun, was defeated at the Battle of Toba-Fushimi in Kyoto in 1868, he opted for voluntary confinement at Kan’eiji. The Aoi no Ma, where he spent two months until the bloodless surrender of Edo Castle to the pro-imperial forces, still displays a number of Yoshinobu’s personal effects. Before his death, Yoshinobu had requested a Shintō burial, and accordingly he was interred in nearby Yanaka Cemetery. 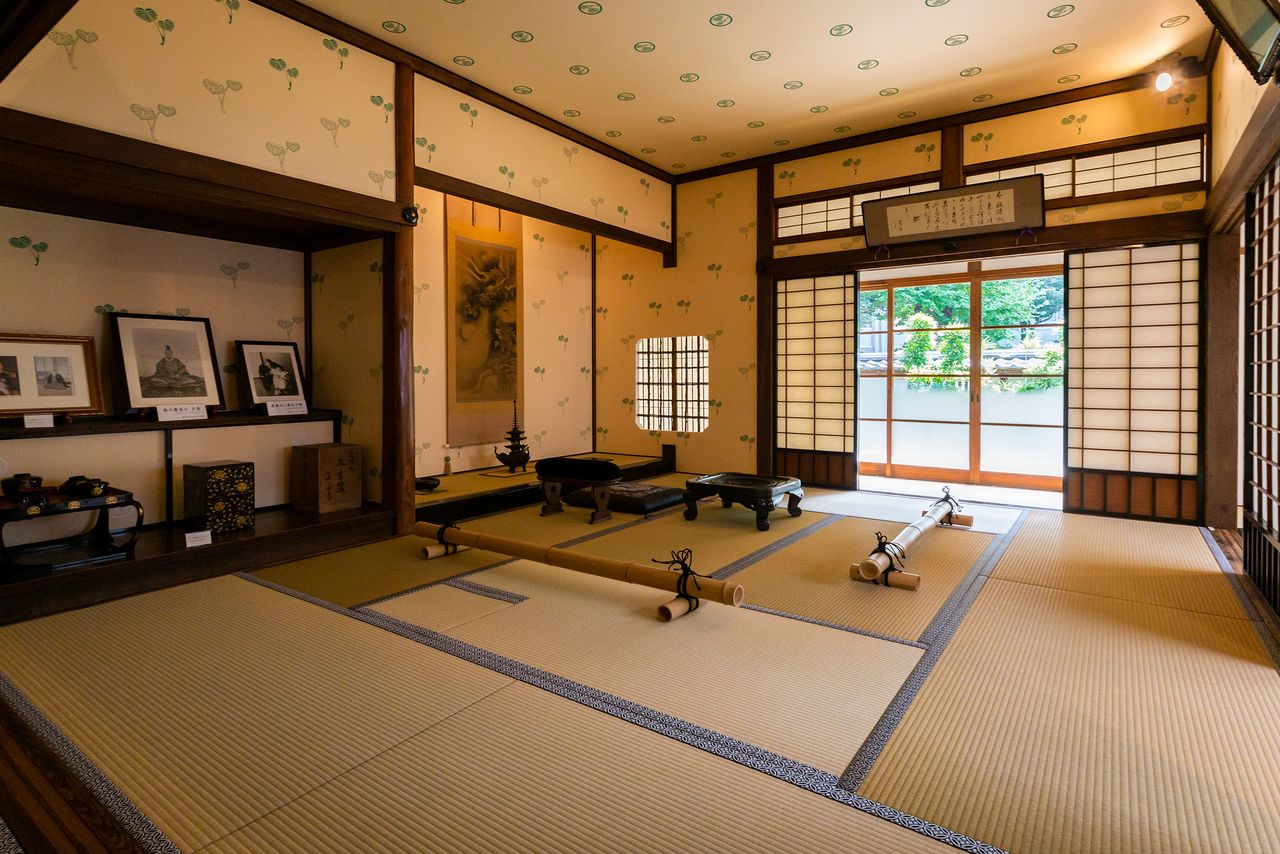 The Aoi no Ma, where Yoshimune lived after he was stripped of his title of shōgun. At the time, this structure was part of Kan’eiji subsidiary temple Daijiin. 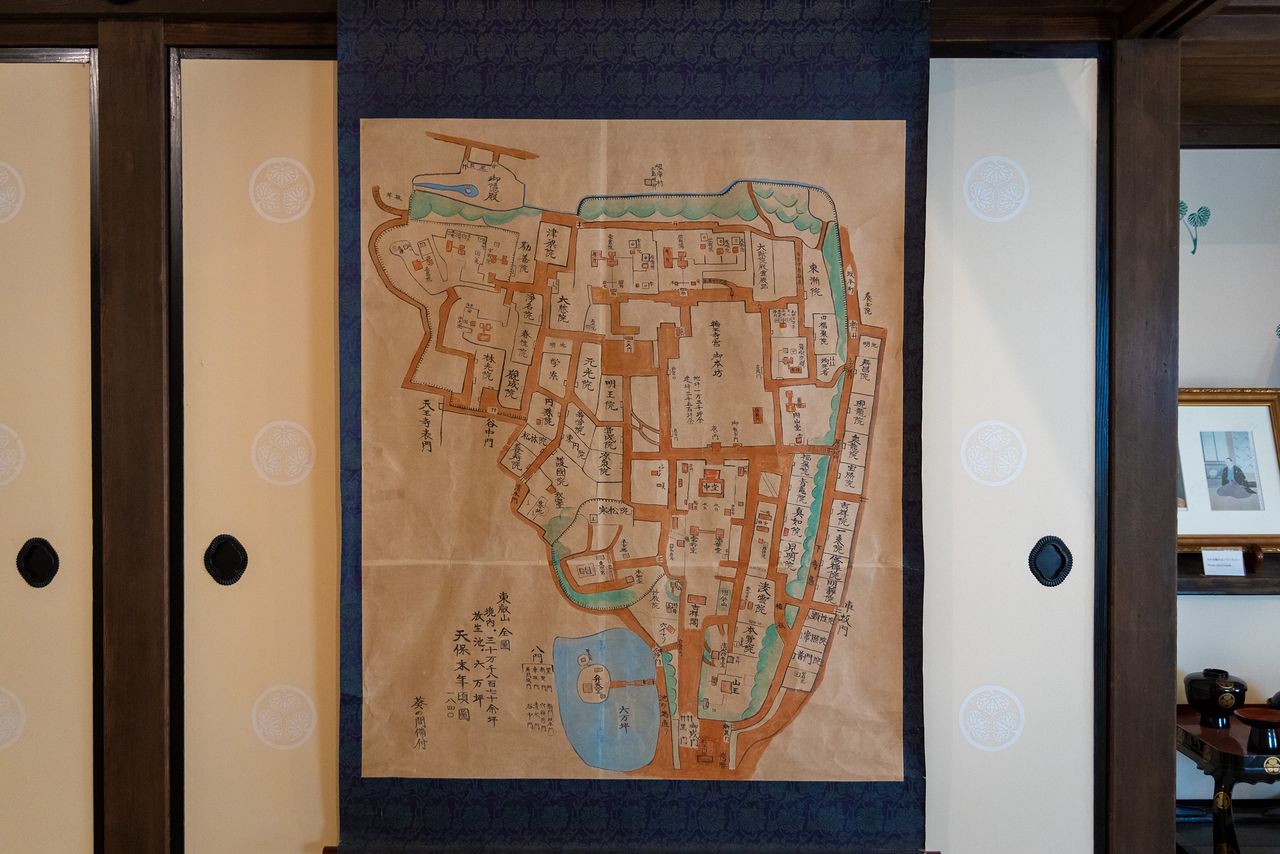 This map of Tōeizan in the Aoi no Ma shows the huge area covered by the temple precincts. In the Edo period, Daijiin occupied the site of Kan’eiji’s present-day main hall.

Fate then dealt Kan’eiji a near mortal blow. Forces loyal to the shōgun gathered at Kan’eiji, precipitating the Battle of Ueno. Pro-imperial troops attacked, and several temple buildings, including the main hall, burned to the ground in the conflict. The temple’s lands were later confiscated by the new Meiji government, and even Rinnōji-no-Miya, the position of head priest of Kan’eiji, Rinnōji in Nikkō, and Enryakuji in Shiga, was abolished.

The temple clung to a precarious existence until reconstruction began in 1875, thanks to the efforts of entrepreneur Shibusawa Eiichi (1840–1931), who had been a retainer of Yoshinobu, and others including Ōkura Kihachirō (1837–1928), founder of the Ōkura zaibatsu, and remaining members of the Tokugawa clan. In 1879, a building that was part of the Kita-in temple complex in Kawagoe, Saitama Prefecture, was dismantled and relocated to the site of the Kan’eiji subtemple Daijiin, where it was repurposed as Kan’eiji’s main hall.

Kan’eiji’s travails continued, the complex sustaining major damage in the Great Kantō Earthquake of 1923 and the wartime fire bombings of Tokyo. But the temple adapted to change, for example creating a cemetery on land donated by the Tokugawa clan after the grove where the family’s tombs were located burned down, and welcoming ordinary people as danka temple supporters. Today, Kan’eiji continues to oversee numerous temples as a subheadquarters of the Tendai sect. 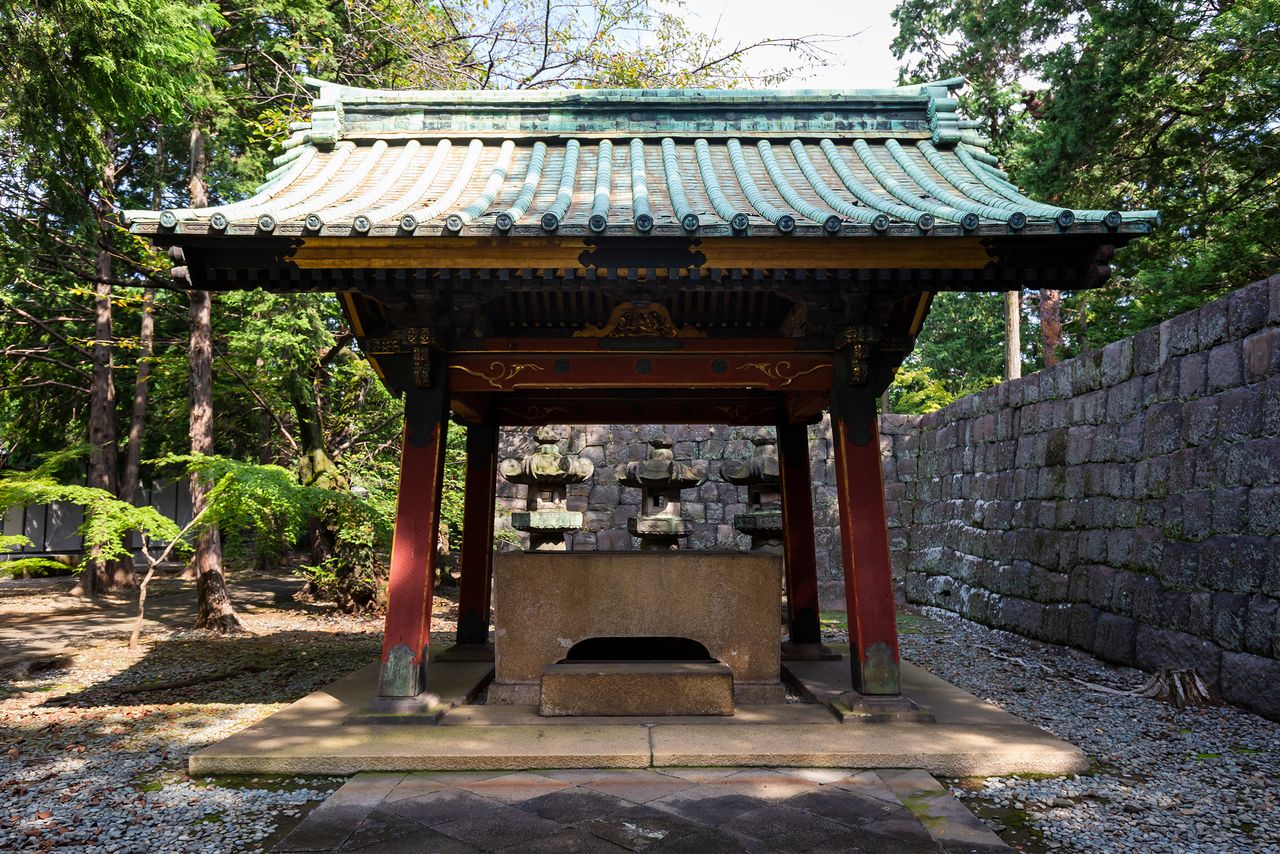 This covered cistern for ablutions was constructed in the Edo-period mausoleum style. The stone wall on the right, which encircles the shōguns’ tombs, was erected by Shibusawa Eiichi and statesman and naval engineer Katsu Kaishū (1823–99). 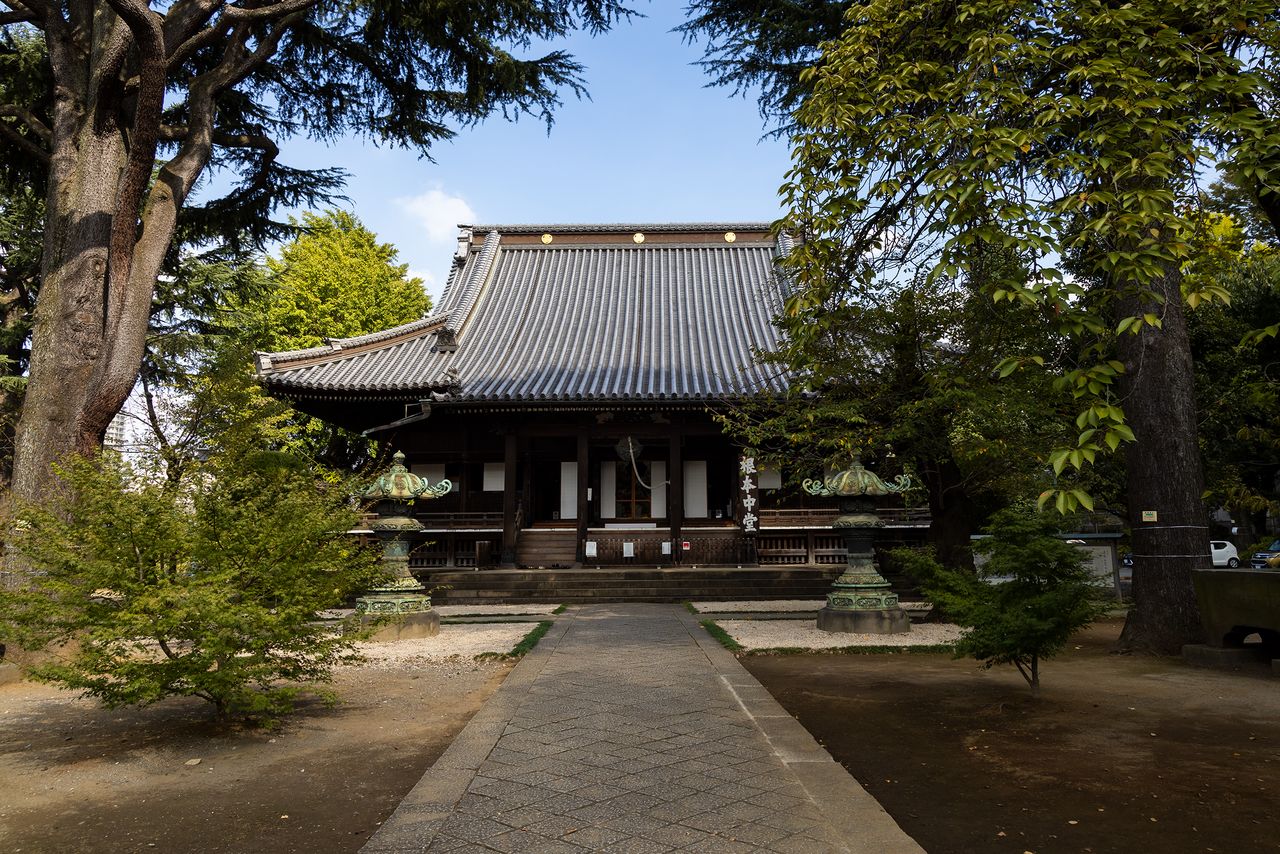 This structure, now Kan’eiji’s main hall, was part of the Kita-in temple complex in Kawagoe, where Tenkai had earlier served as chief priest. It was relocated to Ueno to replace the original main hall.

A Return to Roots

Recounting Kan’eiji’s various misfortunes, temple priest Ishikawa mentioned the Great Buddha as an example of the temple’s indomitable spirit. The statue’s face fell off repeatedly after earthquakes and other mishaps and underwent repairs each time. But due to wartime requisition of metals, all of the statue was taken except for its face, which was embedded in a wall. This remnant of the Great Buddha became popular among students, the implication being that things could not get any worse and that success could be in the offing. Thus, students flocked to Kan’eiji in the hope of a good result in entrance examinations.

“The touching thing is that many students who come here to pray for success return to give thanks if they have gotten a favorable result. That shows the depth of religious feeling among Japanese and gives the temple the courage to try harder in its endeavors.” 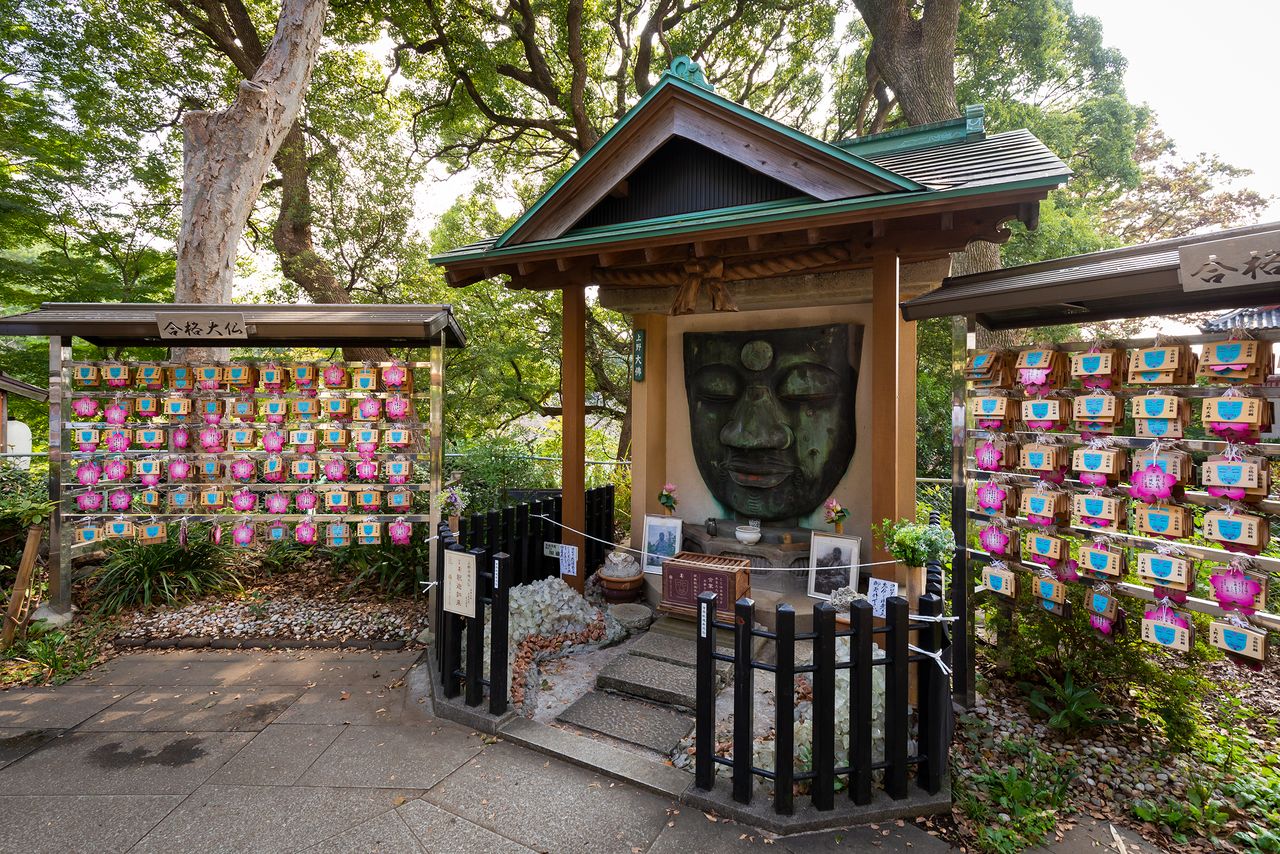 Only the Great Buddha’s face remains today, surrounded by ema votive placards left by students hoping for exam success. Many return to hang placards with a cherry blossom motif once their prayers are answered.

Among the recommended sights in Ueno Park is the view of the Shinobazu Bentendō through the curved trunk of the Tsuki no Matsu pine at Kiyomizu Kannondō.

“The tree stands in a slightly different location today, but it’s still the best place for getting an idea of amusements for Edo residents. Kan’eiji will mark the four hundredth anniversary of its founding in 2025, but just as it was in those days, Ueno Park remains a place for cultural activities, public recreation, and cherry blossom viewing. Tenkai was known for lofty ideas. I feel that although he lived centuries ago, he would surely have supported concepts like diversity and the United Nations’ Sustainable Development Goals. For a look at the future of Kan’eiji, we should look to the past.” 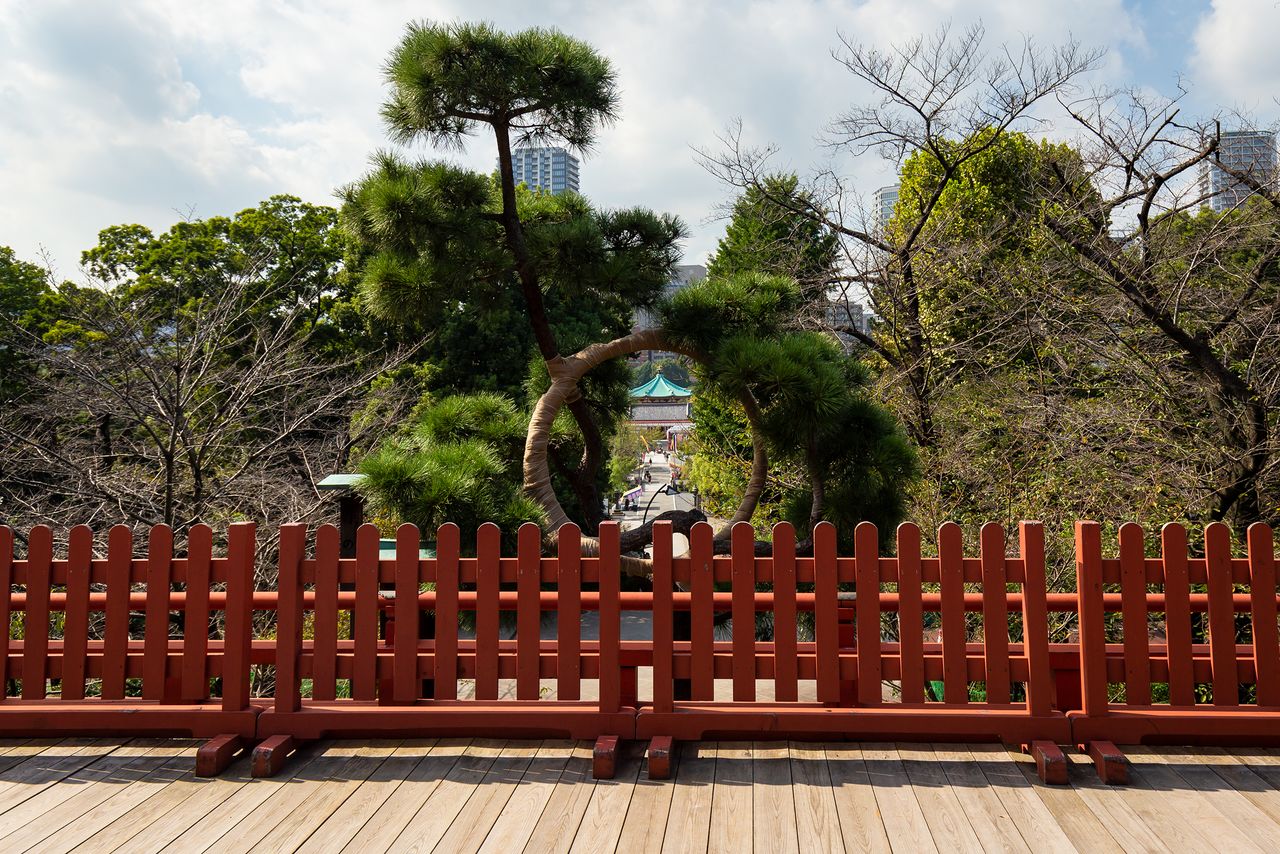 The Bentendō in Shinobazu Pond, viewed through the trunk of the Tsuki no Matsu at Kiyomizu Kannondō. 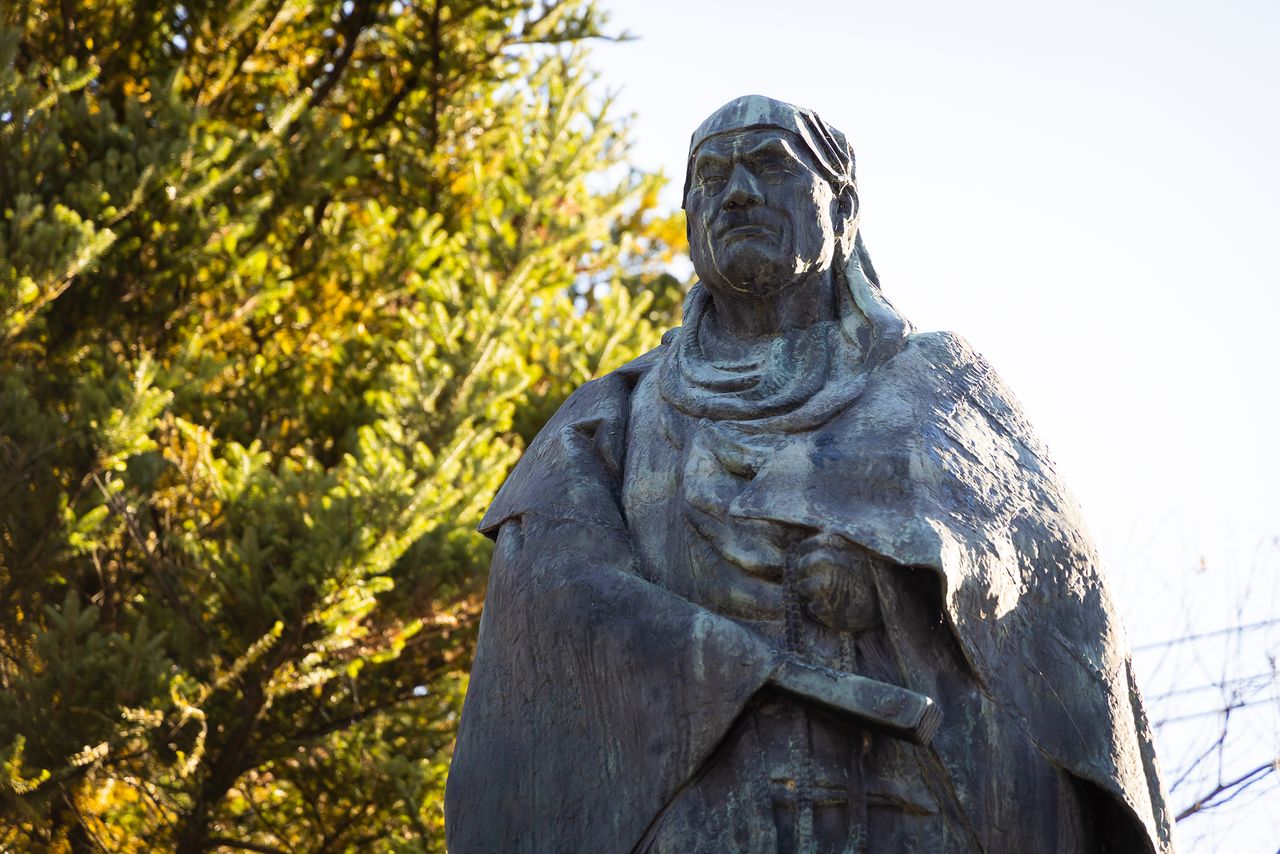 A statue of Tenkai stands next to Shinkyō, the bridge marking the entrance to the temple Rinnōji in Nikkō.