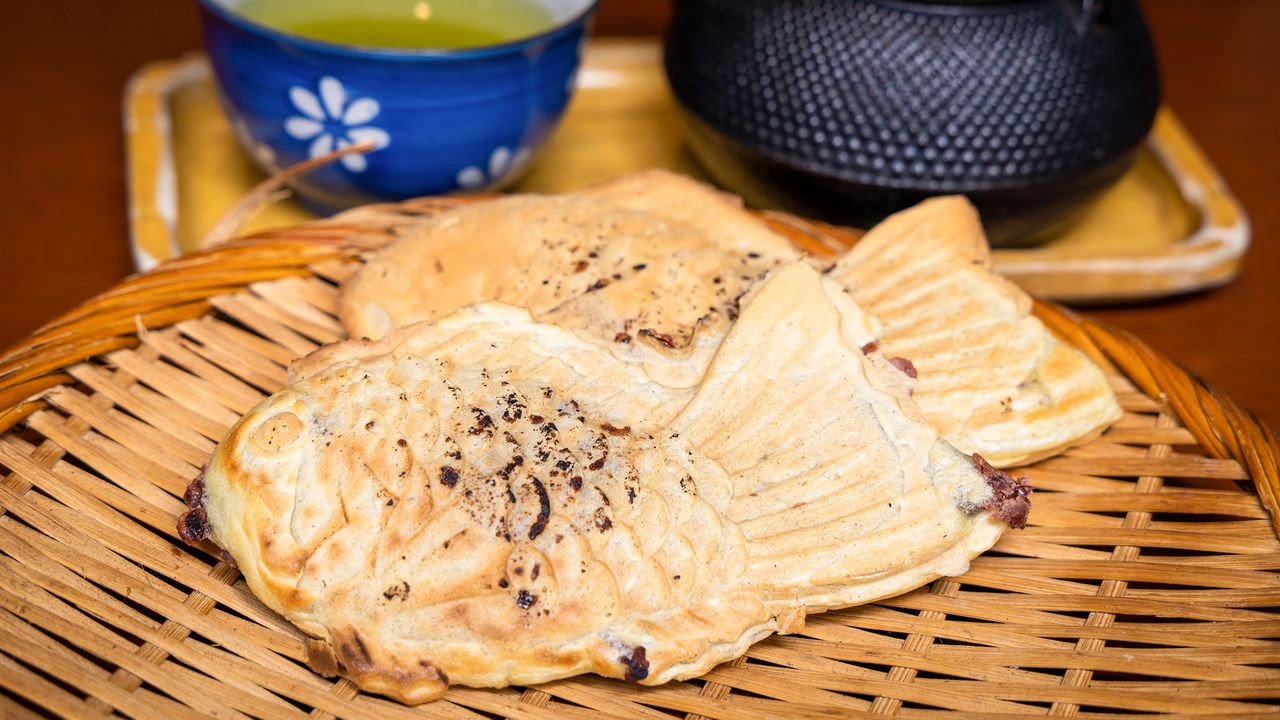 Food and Drink Lifestyle Travel Jul 15, 2022
A beloved fixture of everyday life, taiyaki is a fish-shaped confection bursting with sweet an bean paste. A unique culture has developed around the food, including strong opinions about whether to eat it starting from the head or the tail. We visited Naniwaya, Japan’s oldest taiyaki shop, to learn more about this sweet treat.

The noren curtain fronting Naniwaya in Tokyo’s Azabu-Jūban neighborhood carries the word ganso, “the original.” It refers to taiyaki, fish-shaped confections bursting with bean paste. Kanbe Masamori, fourth-generation head of the business established in 1909, relates that taiyaki is a snack for regular people. “In terms of sophistication, it ranks last in the wagashi hierarchy of Japanese confectionery, but the fact that it’s so accessible makes that part of its appeal.” 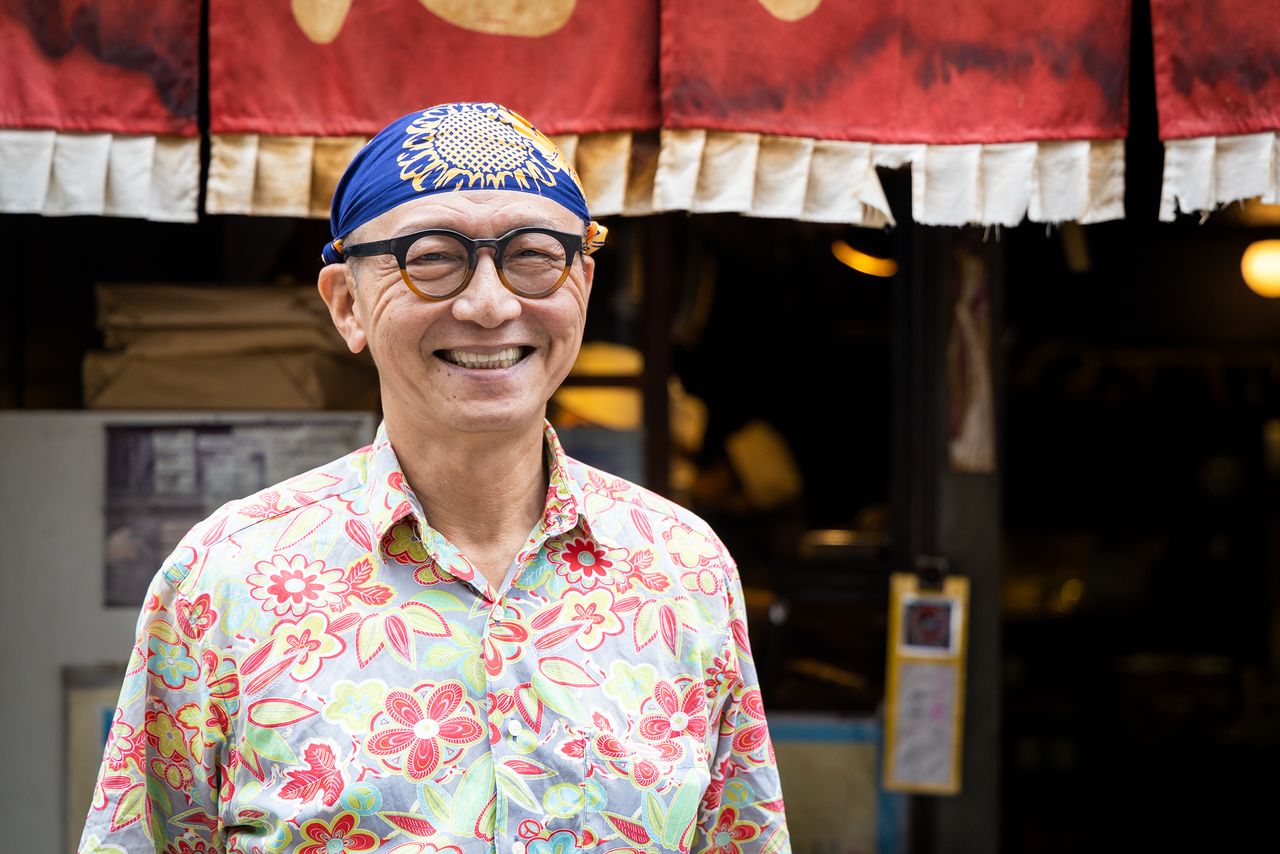 Naniwaya owner Kanbe Masanori can often be found at the grill, welcoming customers with a smile.

Taiyaki is a grilled cake consisting of an (azuki bean paste) encased in a simple, pancake-like crust. It is available just about everywhere people gather, from rail station stalls to shopping arcades, and passersby can often stop and watch as it is being made. Small yet filling, it is reasonably priced too, typically selling for ¥100 to ¥200 each. Nowadays, taiyaki often features tantalizing fillings like chocolate and egg custard that appeal to customers’ different tastes. Tapioca flour is also sometimes added to the batter to produce a very pale crust.

“Taiyaki is likely popular because it’s a warm snack,” explains Kanbe. “In the past, few homes were well heated in winter, and children, women, and laborers working outdoors welcomed the touch of warmth that taiyaki provided.” The fish shape was an added attraction. “Children played at making taiyaki ‘swim,’ and adults debated which end, head or tail, to start eating from. Whoever came up with the idea of taiyaki was a genius.”

The Japanese language uses specific counter words for objects depending on characteristics like shape, length, and size. As taiyaki looks like a swimming tai (sea bream), Kanbe says customers often ask for one “fish” (ippiki) when ordering, but he is happy to serve them taiyaki however they phrase their request. 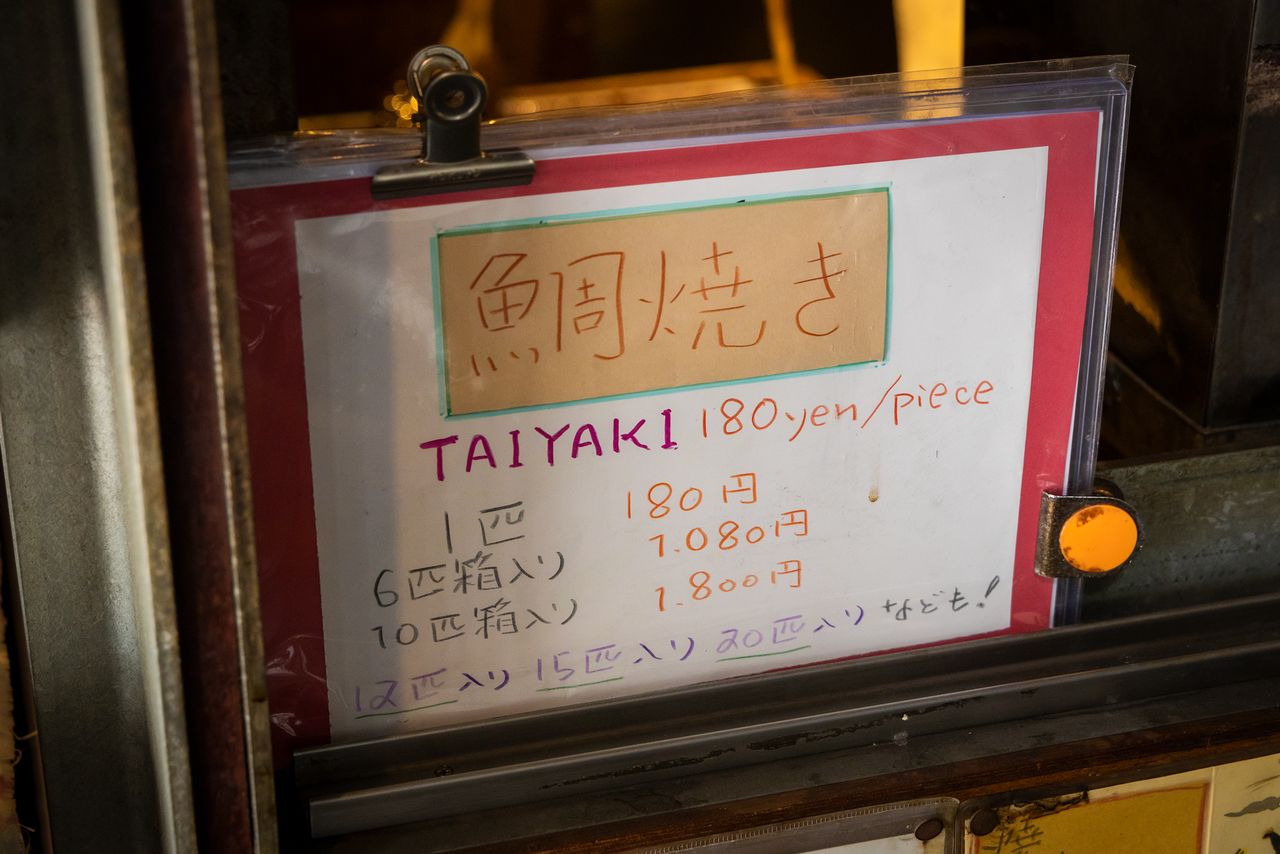 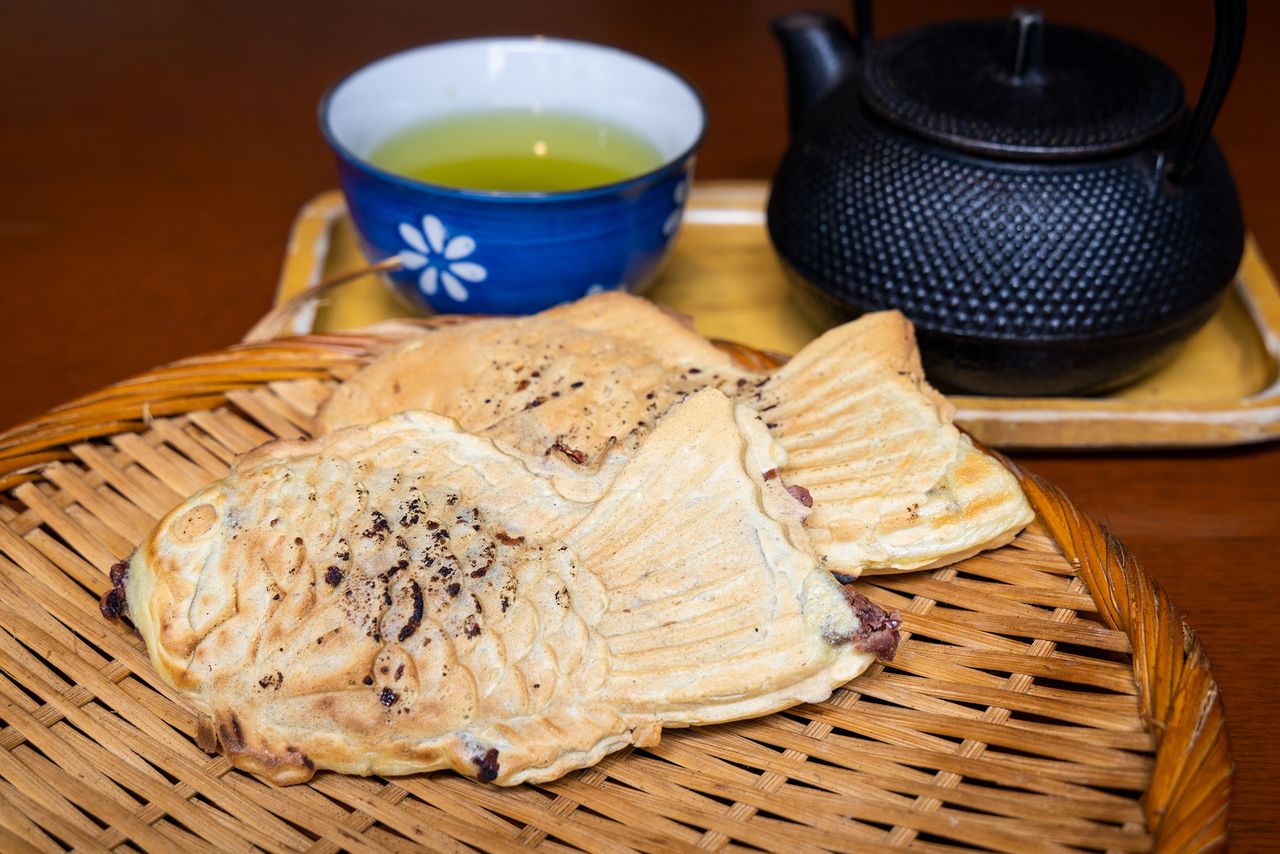 For customers who prefer to eat in, taiyaki costs ¥200. A set consisting of one taiyaki and a cup of tasty green tea goes for ¥700.

Taiyaki is plebeian food, and while there are various theories as to its origins, little solid documentation exists. “The only thing I can say for certain is that it’s been around for more than a century,” Kanbe declares. “Since Naniwaya is the oldest taiyaki shop in the country, we say it all started here.” 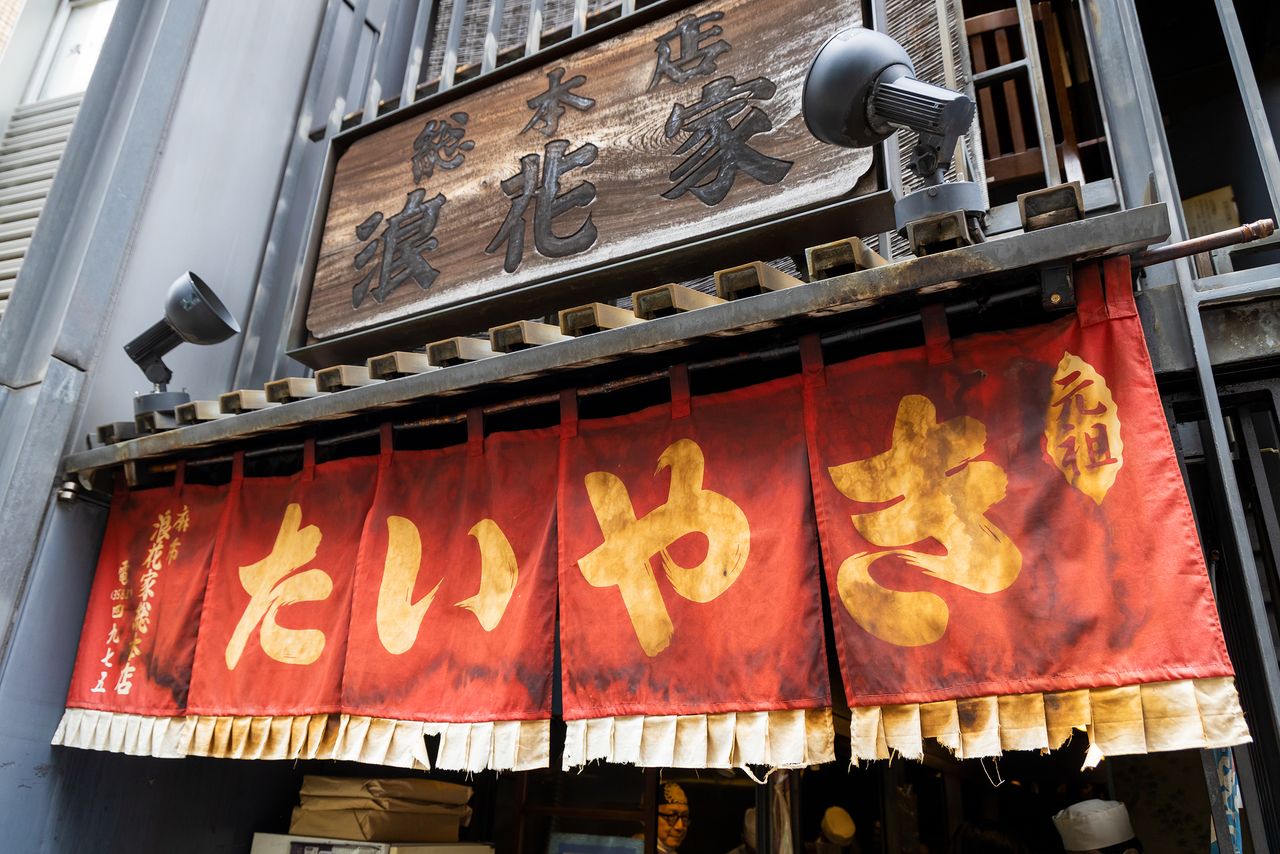 The Naniwaya noren proudly shows its wear and tear.

The brothers who founded the shop were from Osaka and named it after the old designation for the city, Naniwa. The siblings started out with restaurants in two Tokyo locations, Kudan and Nihonbashi. Even today, the second floor of the Azabu-Jūban shop serves yakisoba (fried noodles) and other light meals, along with traditional sweets like kakigōri (shaved ice) and anmitsu, a dish of fruit, beans, agar cubes, and an slathered in sweet sauce. “Taiyaki was originally a dessert served in the two restaurants. There were molds for creating an-filled sweets in assorted shapes like round Imagawa-yaki cakes, turtles, and even dirigibles.”

These days, molds for fish-shaped taiyaki are often large iron griddles allowing several cakes to be grilled at once. But Naniwaya sticks to the old style of individual molds mounted on tongs. In the old days, proprietors probably favored this style because they could order individual molds in different shapes and add variety to their lineup.

Kanbe postulates that taiyaki became popular because of the name. “Tai is part of the word medetai, meaning a happy event. Subsequently, sea bream are associated with auspicious occasions. In the past, the fish was served at wedding feasts and other joyous occasions, and ordinary people considered it a luxury. So taiyaki probably spread because it was an inexpensive way of aspiring to something fancy.” 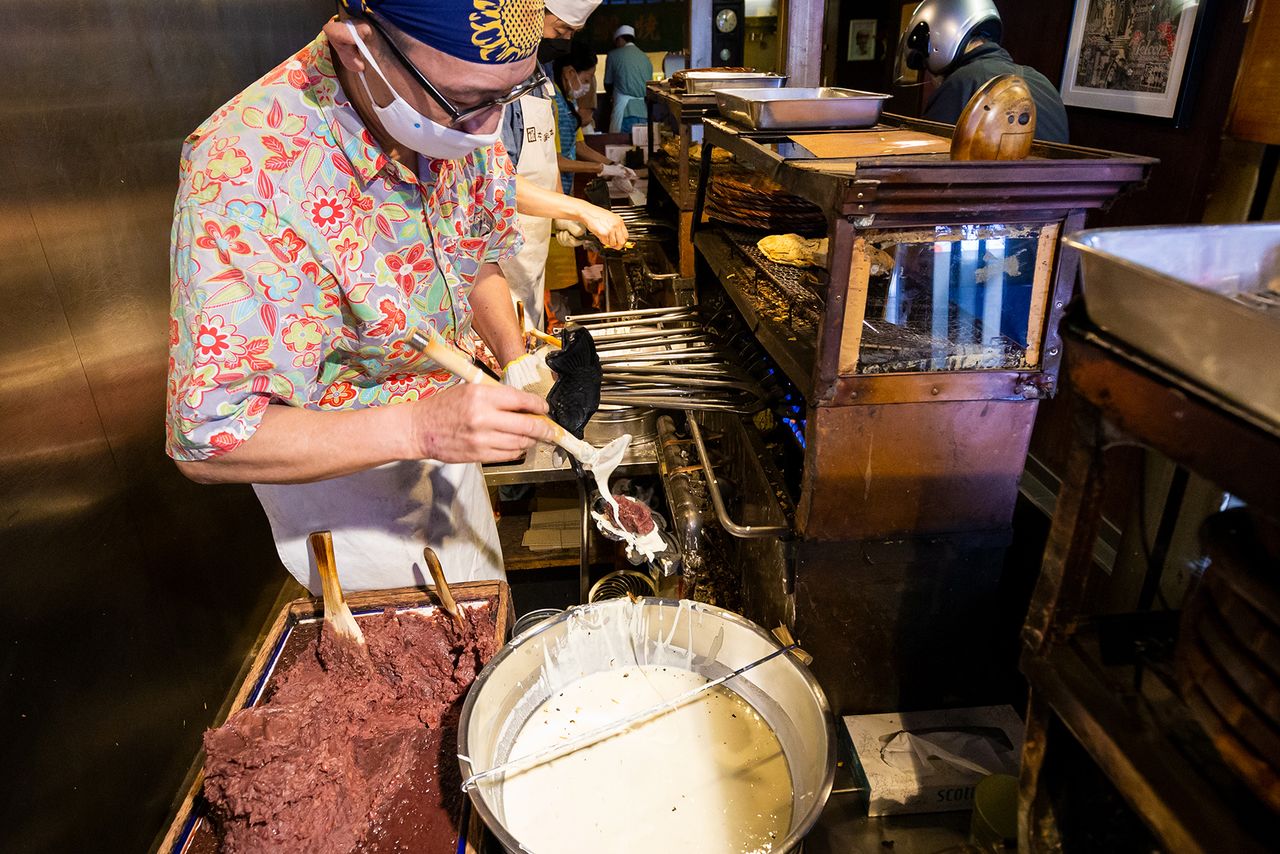 At Naniwaya, each taiyaki is grilled individually. 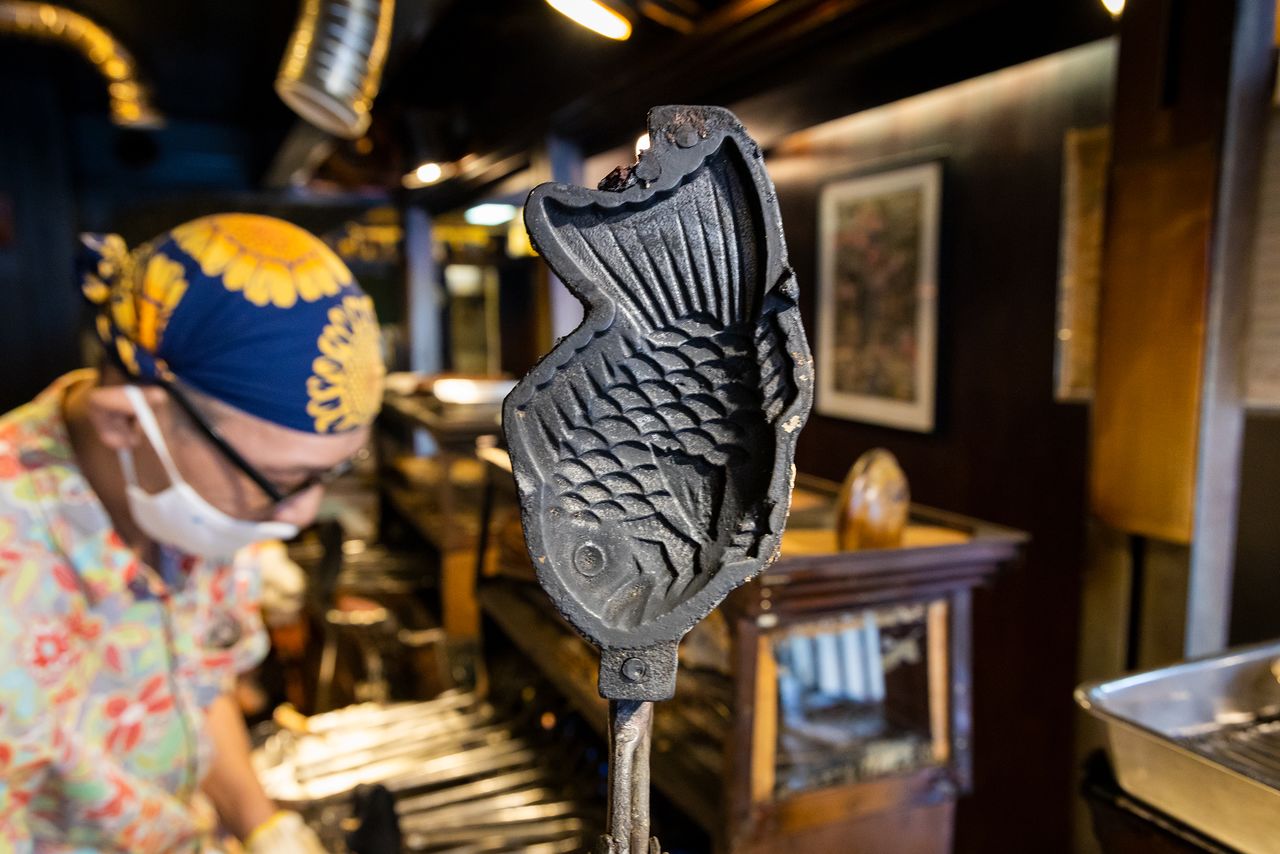 A taiyaki mold. Interchangeable molds allow differently shaped treats to be made.

The founders of Naniwaya had a nose for business. They set up a franchise-like system that soon saw 150 stores throughout the capital, but downsized as Japan headed into World War II. The main store moved from Kudan to its present location in Azabu-Jūban around 1948.

Kanbe is grateful for that fortuitous choice of neighborhood, saying, “If we hadn’t relocated to Azabu-Jūban, we might never have become so well-known and likely would have quit the business long ago.” At the time, a famous soba noodle shop stood right across from Naniwaya. After their meals, patrons would often pick up wagashi sweets at nearby shops like Mamegen or Kibundō, or stop by Naniwaya for taiyaki to take home. Azabu-Jūban is adjacent to a swanky residential area, and many regulars at Naniwaya were well-known entertainers, athletes, politicians, and businesspeople, who spread the word about the shop. 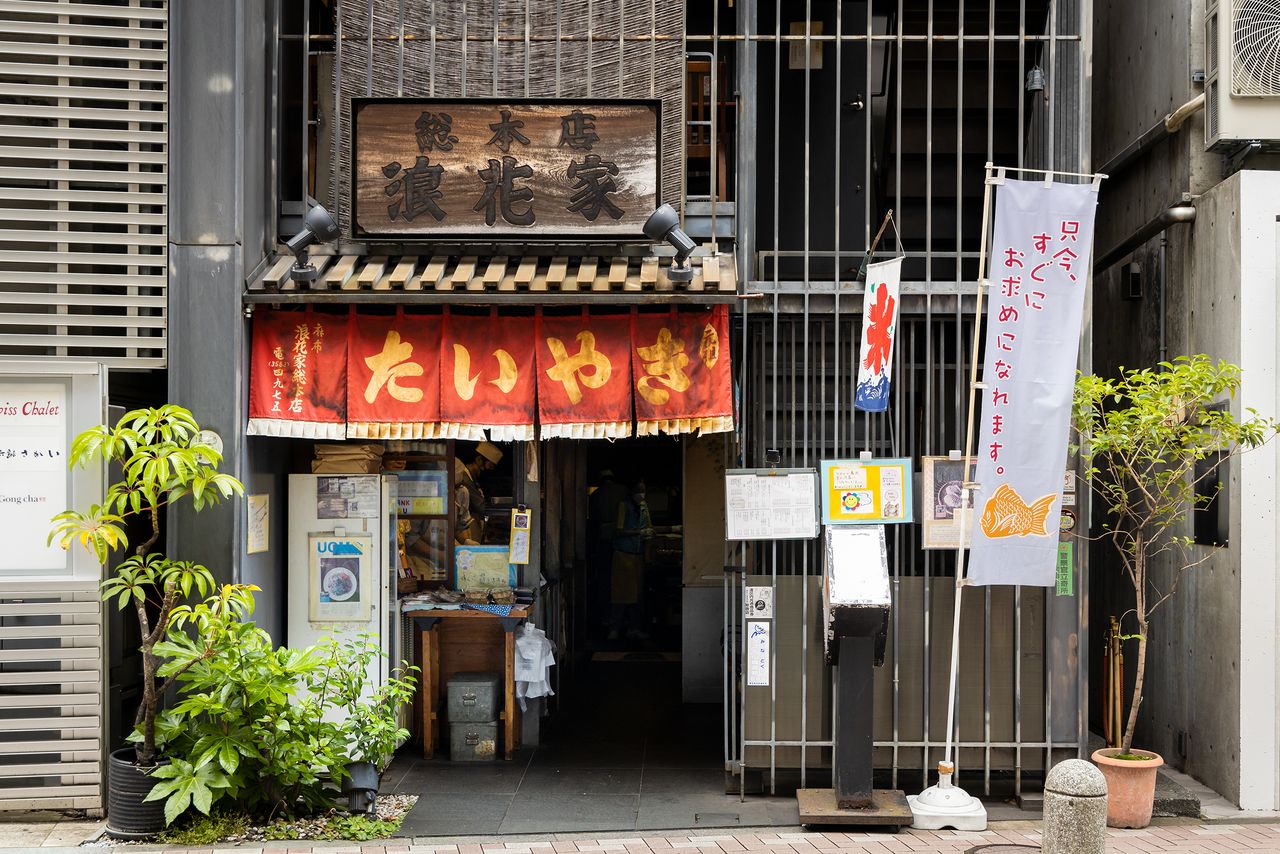 The Naniwaya shop in Azabu-Jūban, in the heart of the metropolis. 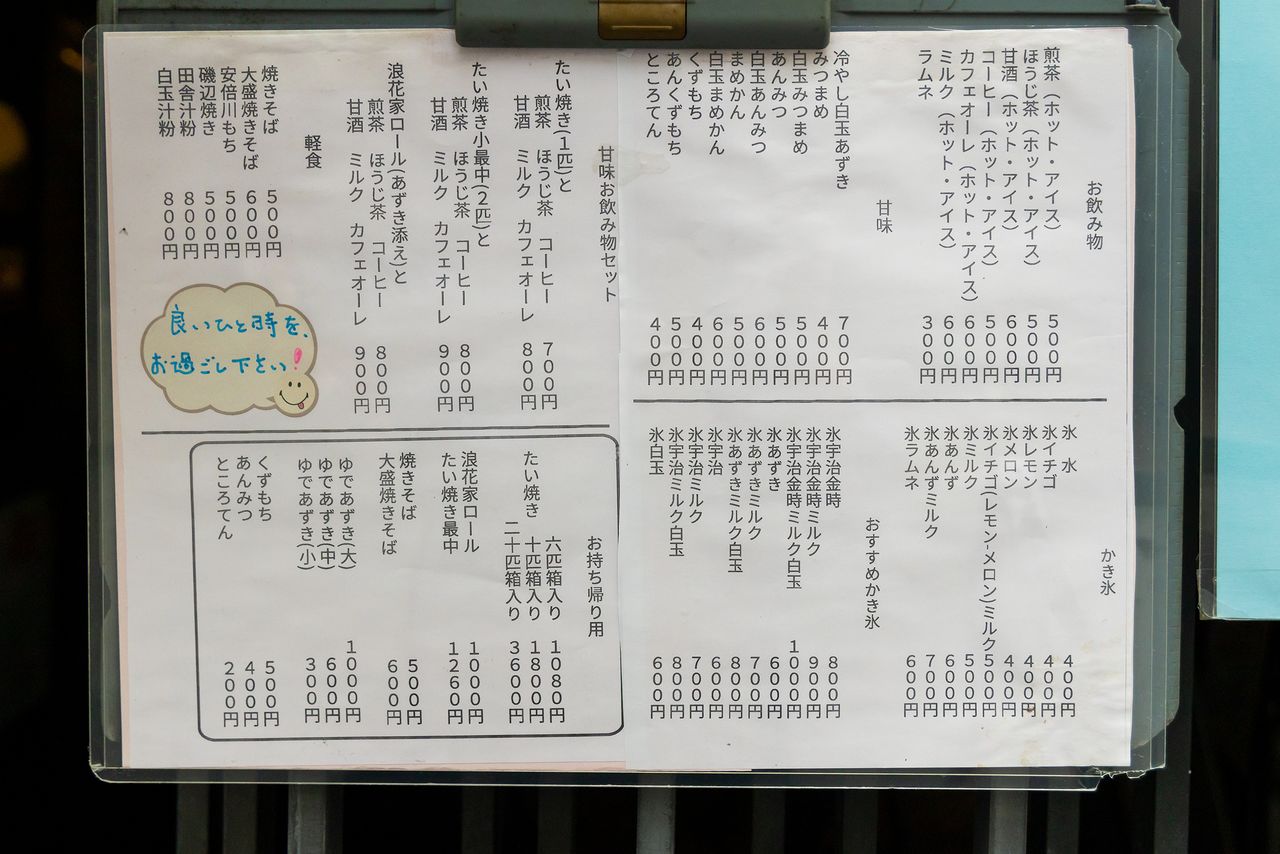 The shop’s menu includes traditional sweets like anmitsu and a wide selection of kakigōri flavors.

As fate would have it, a song featured in a 1975 children’s television program sparked a taiyaki boom and rocketed Naniwaya to prominence. The song, Oyoge taiyaki-kun (Swim, Little Taiyaki), told an imaginative tale about a taiyaki who runs away to freedom in the sea after an argument with the old man running the shop where he was born.

Kanbe’s father Morikazu was the model for the old shopkeeper in an animated version of the story created for television. Thanks to the show’s popularity, customers lined up outside the shop long before opening hours, and Naniwaya became a household name. Today, there are nearly 10 branches of Naniwaya established by long-term employees in Tokyo and other cities.

Naniwaya counts prominent businesspeople, entertainers, and others among its regular customers, and also many non-Japanese, thanks to the shop’s proximity to several foreign embassies. Famous visitors to Japan have also been known to drop in for a taste of taiyaki. Members of rock band Aerosmith are purportedly ardent fans and stop by the shop every time they tour in Japan. They even requested taiyaki while performing in Osaka, so Naniwaya’s Osaka branch obliged by lugging ingredients and equipment to the concert venue and preparing taiyaki there. 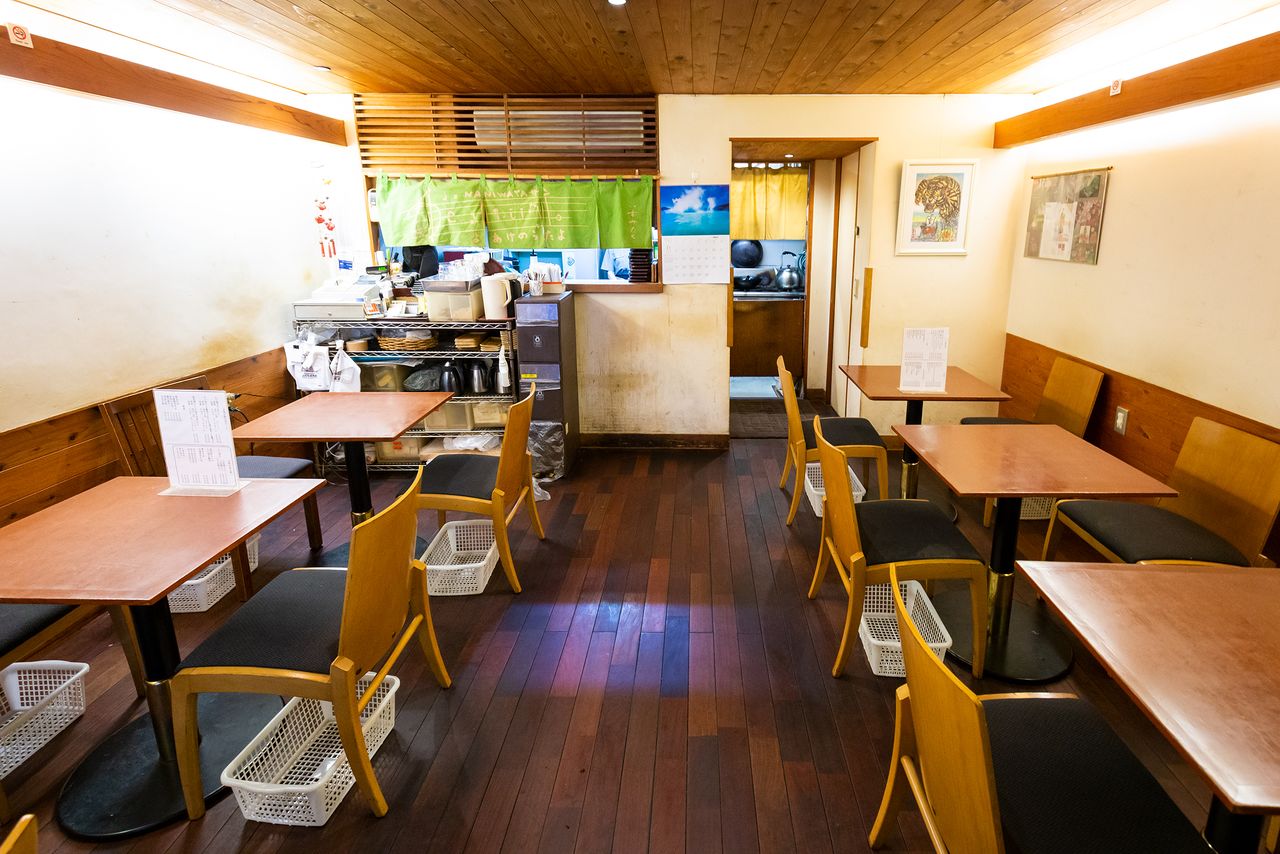 The second-floor restaurant serves light meals, taiyaki, and other sweets. 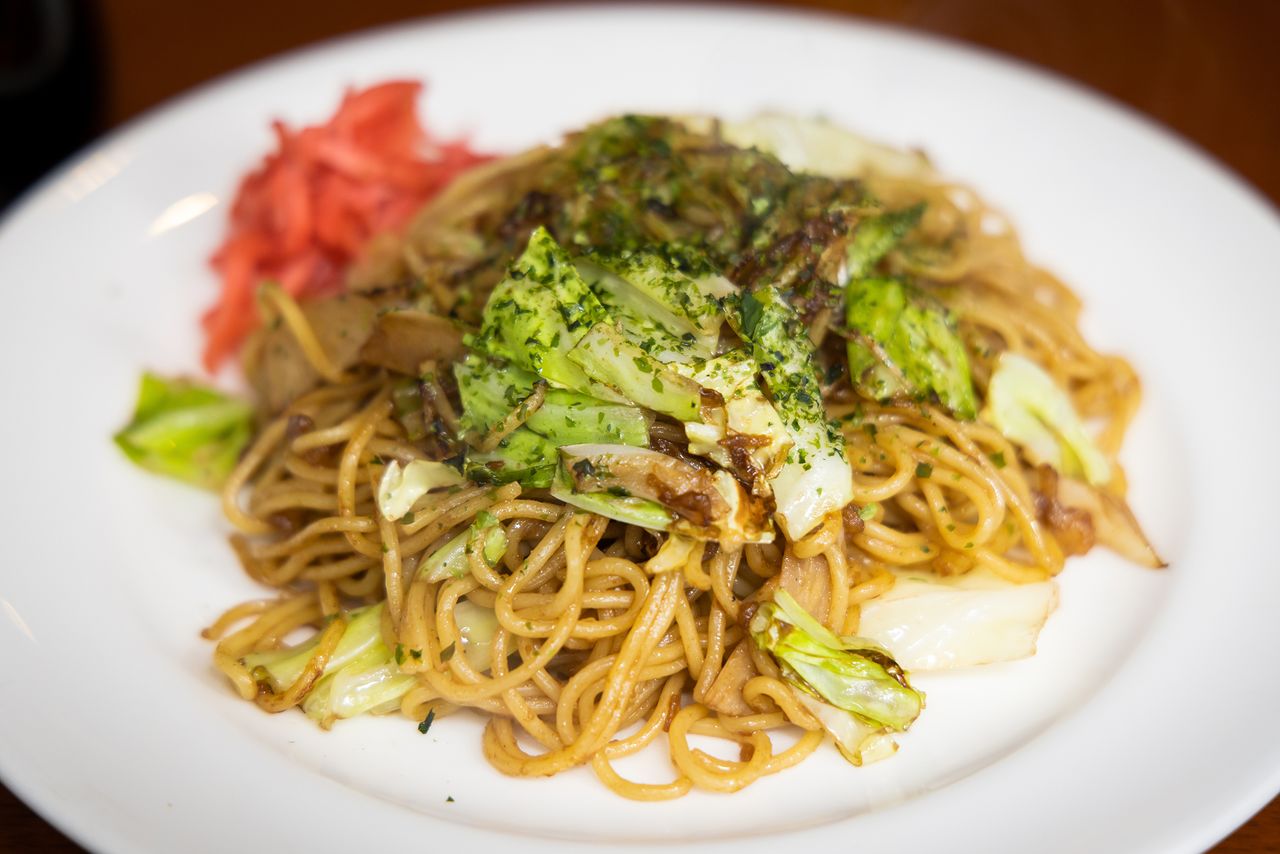 Naniwaya is also known for its yakisoba, a bargain at ¥500.

The most important ingredient in Naniwaya’s taiyaki is the an bean paste filling. The shop uses azuki beans from Hokkaidō’s Tokachi region, which is famous for its azuki. The batter, meanwhile, is simplicity itself, just flour thinned with enough water to form a light crust around the filling, similar to the thin layer of grilled batter covering kintsuba, another traditional confection. 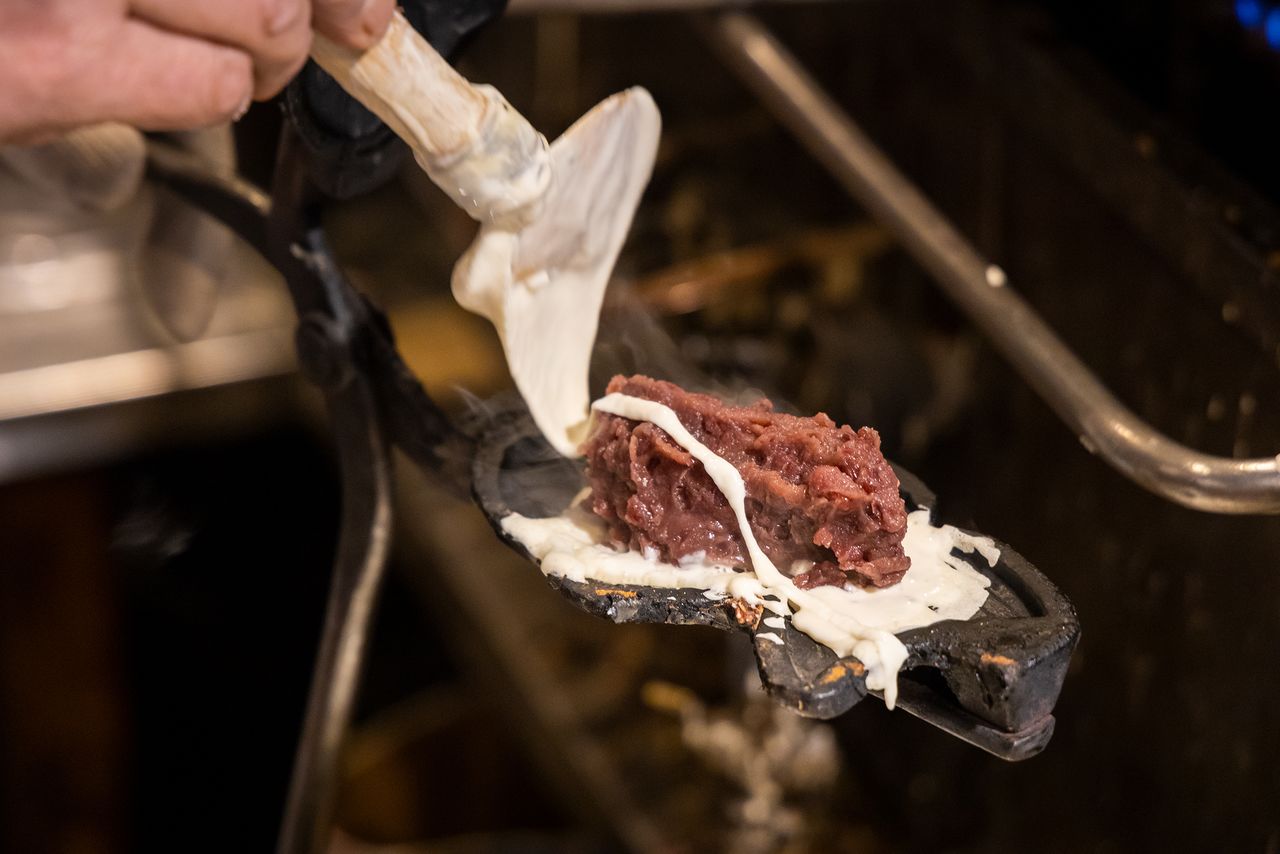 A mound of bean paste sits atop a thin layer of batter. Achieving just the right balance of batter to bean paste is a highly-developed skill.

Serious taiyaki fans make a distinction between individually grilled cakes and those prepared several at a time on a large griddle. Taiyaki being akin to a fish, Kanbe compares individually grilled cakes to unblemished single-hook line-caught fish, whereas batch-cooked taiyaki are like fish caught all jumbled together in nets. “Taiyaki carefully grilled one by one just taste better, and each is slightly different than the next.” 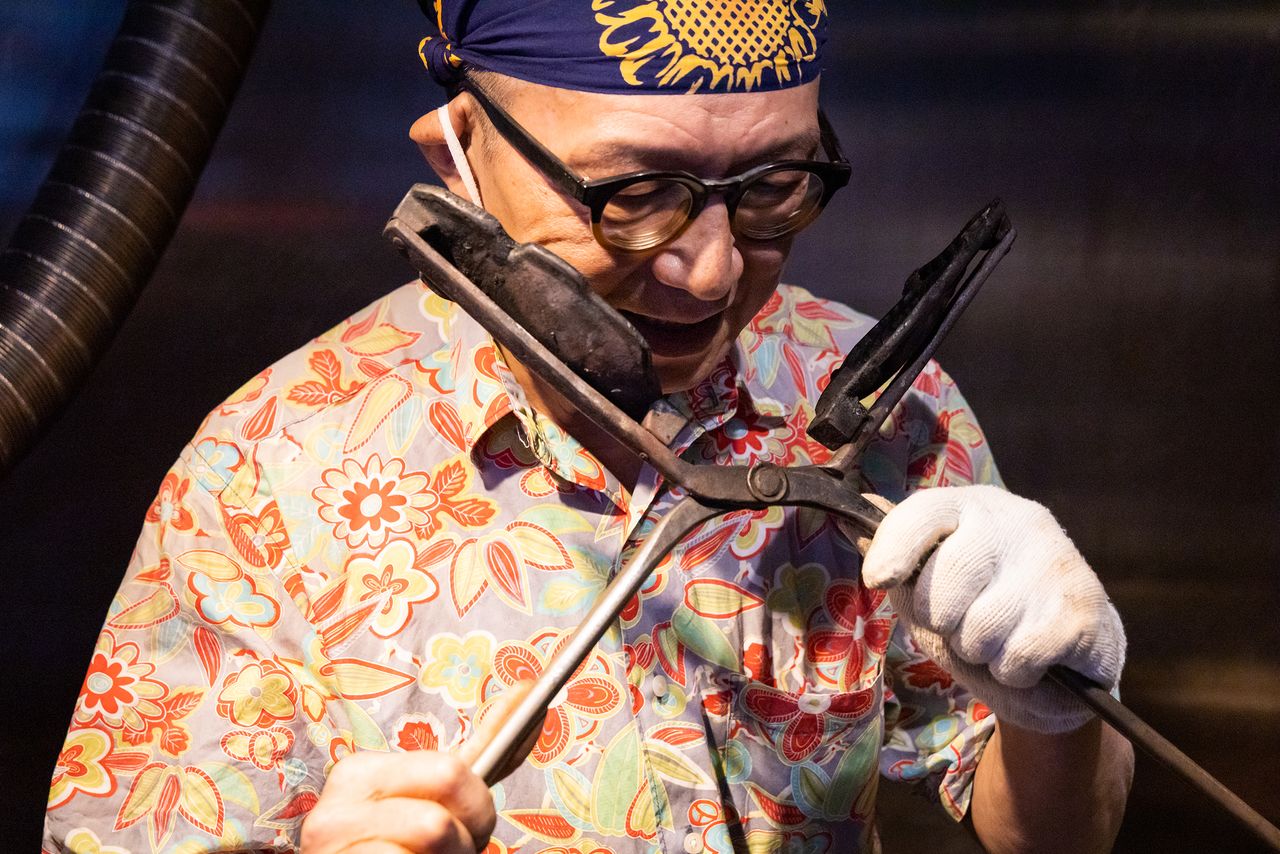 Kanbe sets to work only after checking the temperature of the grilling iron by bringing it close to his cheek, a craftsman’s skill developed over decades. 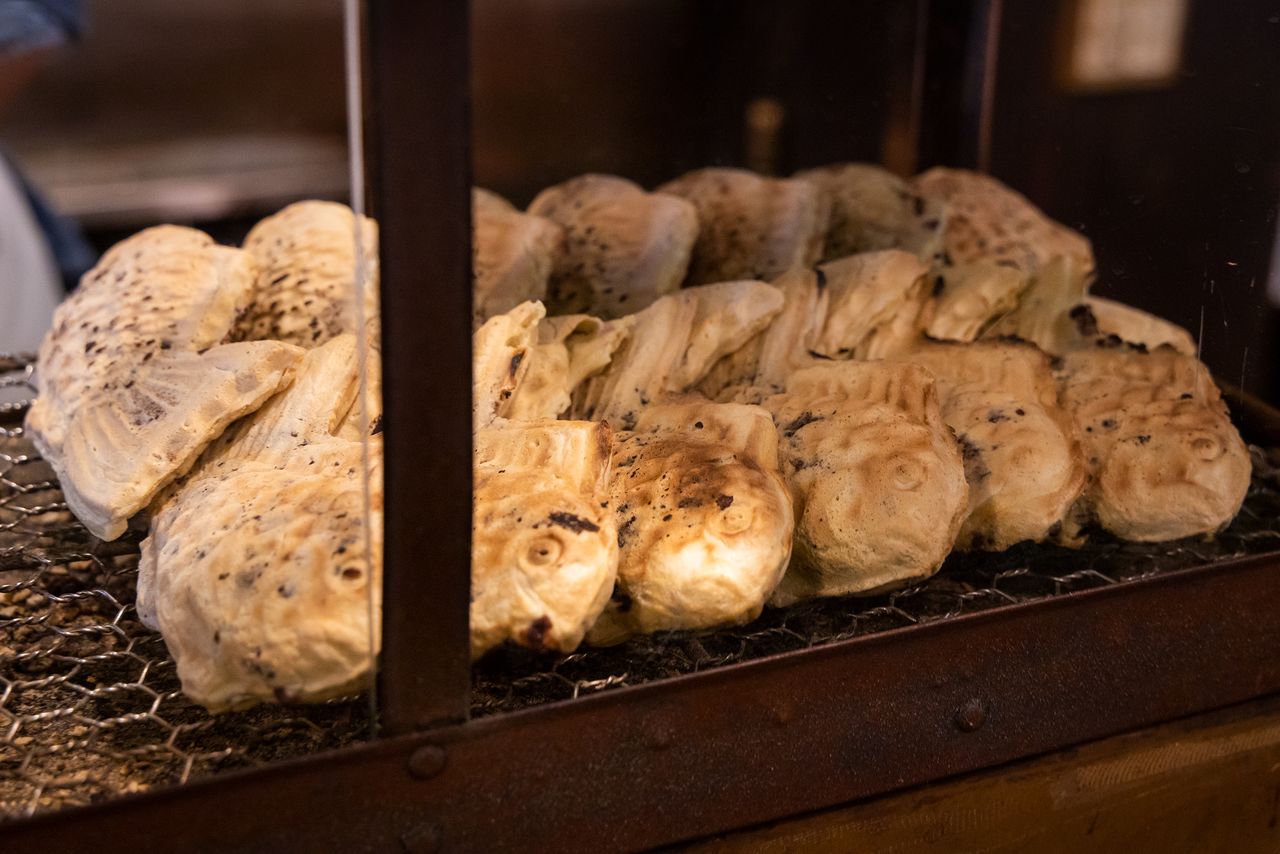 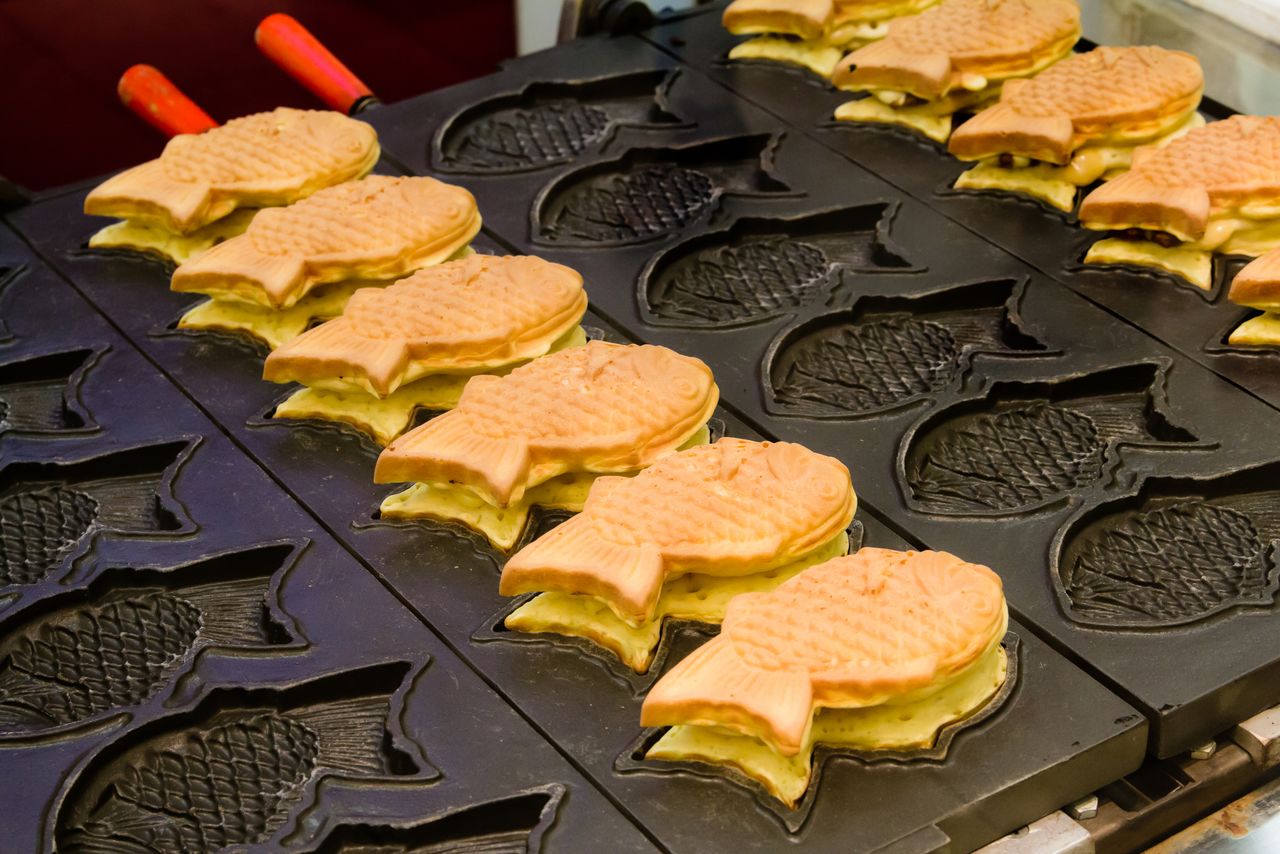 Many shops use griddles capable of cooking several taiyaki at once. (© Pixta)

There has long been debate over whether to take the first bite from the bean-filled head or from the crunchier tail. “Taiyaki is a snack for ordinary people, so it doesn’t matter which end you start with,” Kanbe declares. However, he warns that an that is too hot will come across as overly sweet, so taiyaki tastes best when it has cooled down. “Those in the know break it in two and set it aside for a while to allow the filling to cool a bit.” Kanbe himself takes his confections home and says he likes them best when reheated in the oven for a few minutes to get the outside crispy.

He says that taiyaki go well with green tea, but that cold milk is good too. “Just like when you have milk with an anpan bean bun. It’s a winning combination” 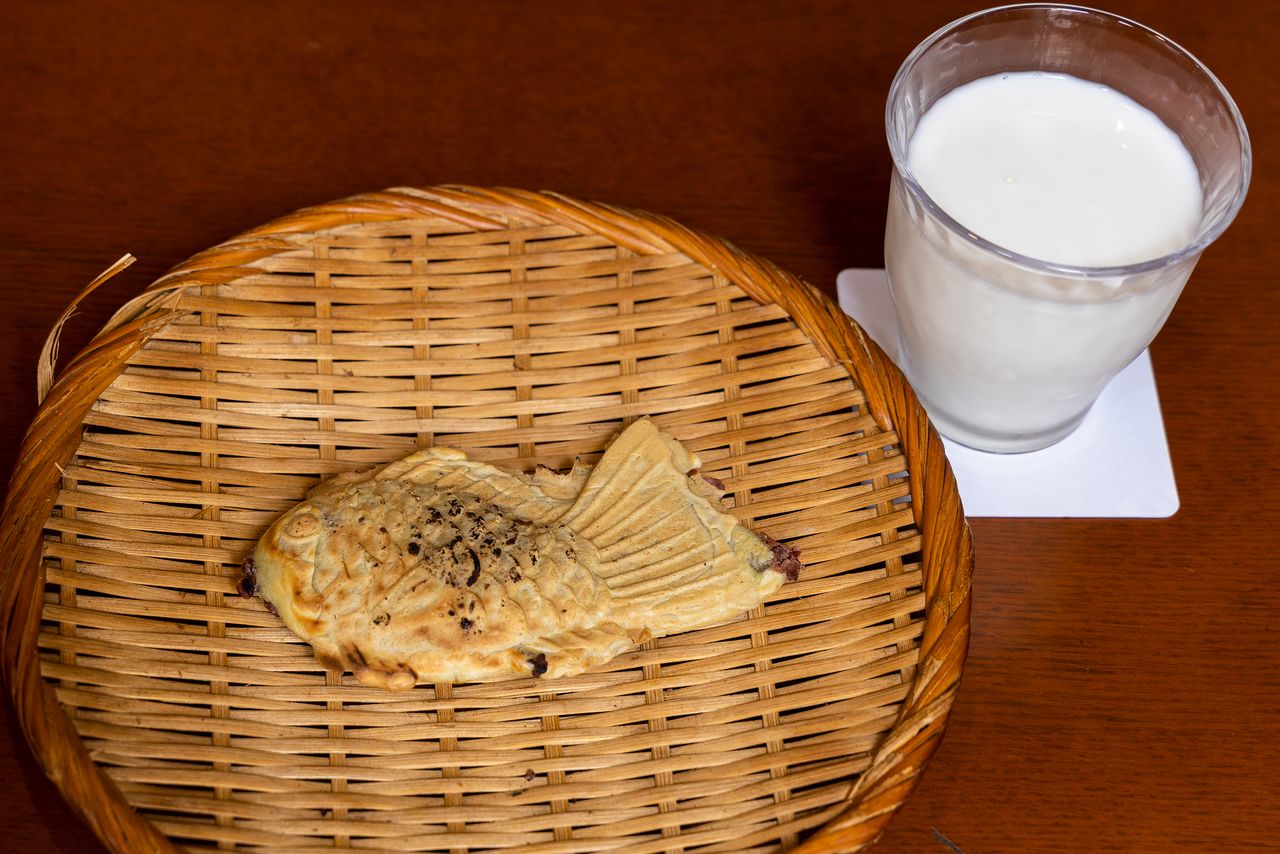 Naniwaya may be the patriarch of taiyaki, but Kanbe knows that he cannot rest on his laurels. “Even if the shop is one or two hundred years old, it will go bust if someone else offers a better-tasting product. Ensuring a consistent taste experience means making adjustments all the time.”

He says that taiyaki tastes best when the an flavor has a bit of a rough edge to it. But due to selective breeding, many Tokachi-grown azuki beans varieties have lost their bite. Kanbe accumulated detailed data on the beans grown in each part of the region in deciding on the variety of bean he uses now. He has developed such a sensitive palate for an that when he tastes taiyaki made by other shops, he claims he can identify which area of Tokachi the beans come from. This is the kind of attention that keeps the taste of Naniwaya taiyaki consistent.

“Taiyaki may rank last in the wagashi pecking order, but Naniwaya workers take pride in their craft and work hard to turn out a good product. If you’ve never tasted taiyaki made individually, I invite you to try one at Naniwaya. You’re sure to come away convinced that there is a difference.” 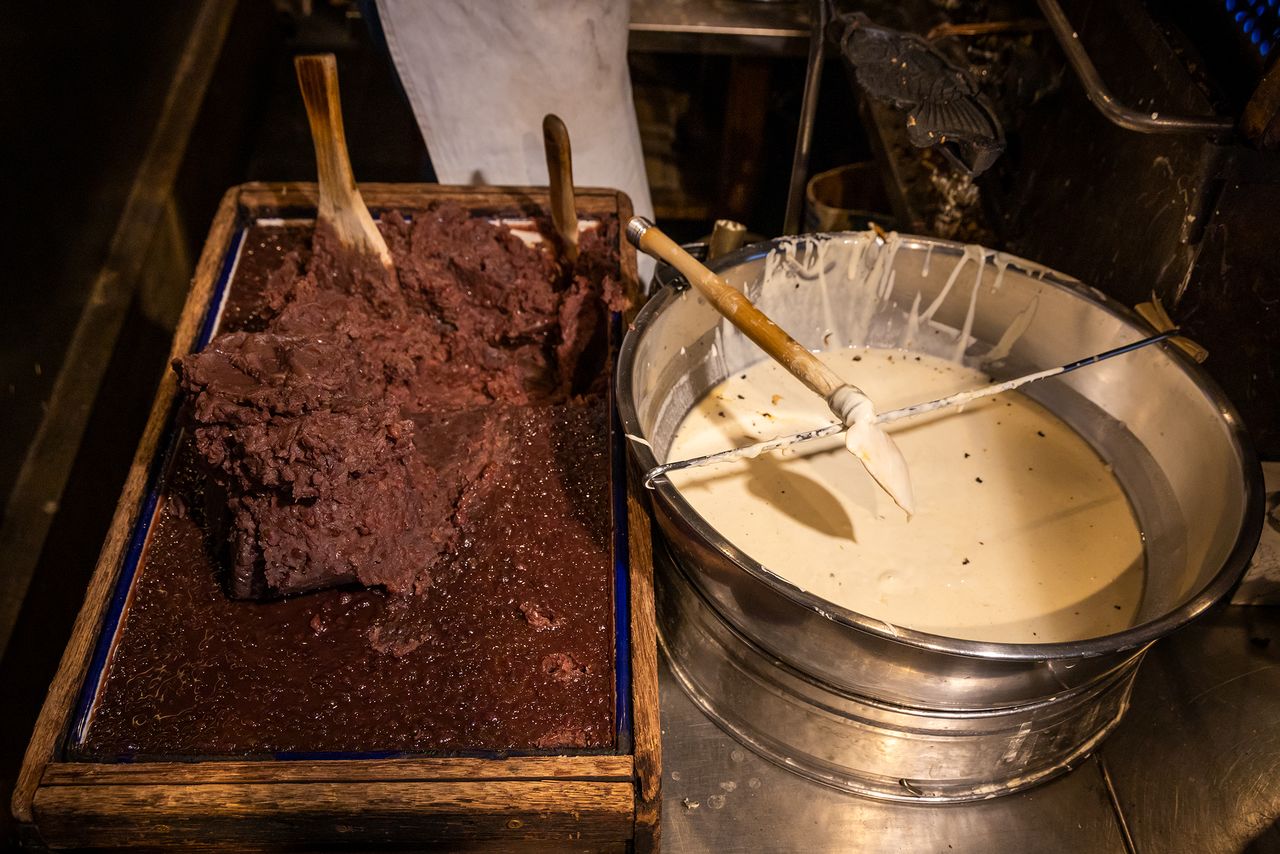 The an used at Naniwaya tastes less sophisticated and is not overly sweet or cloying. The shop also sells azuki bean paste by itself.