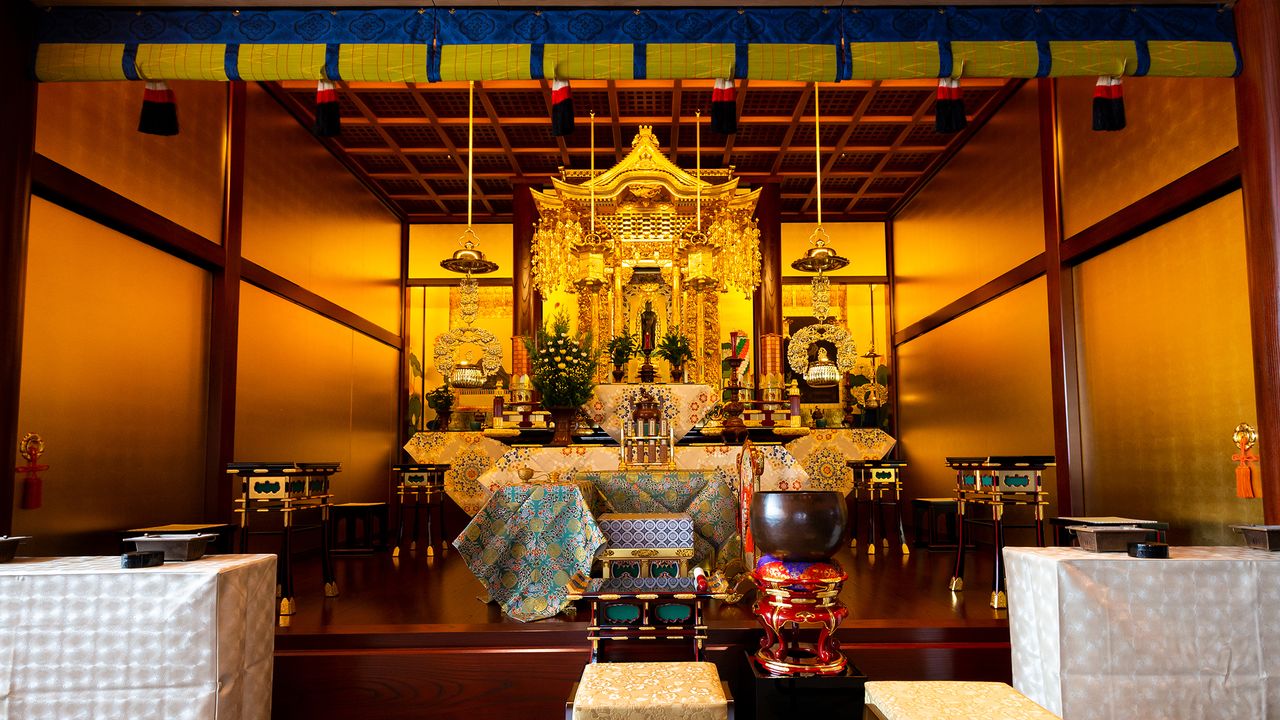 Lifestyle History Oct 6, 2022
The Tsukiji Honganji Tsukuda Building at the entrance to the popular Tsukishima Monja shopping street is a new presence in Tokyo’s historic Tsukudajima neighborhood. Incorporating a sub-temple of Tsukiji Honganji, one of the capital’s most renowned Buddhist temples, it is a residence for seniors and also boasts a fashionable café. Below we explore this unusual venture and nearby places of interest.

A New Approach to Propagating Buddhism

Formerly an insular presence, Tsukiji Honganji in Tokyo’s Chūō underwent a makeover in 2015 that transformed the Buddhist temple into a welcoming space. Today, it boasts a café offering a popular breakfast set and a bookstore that attract members of the general public.

The Tsukiji Honganji Tsukuda Building, containing the Tsukishima sub-temple of Tsukiji Honganji, opened its doors in September of this year. On the first floor is the Tsukishima branch of the main temple’s Tsumugi Café. The second floor houses the temple’s prayer hall, while the remaining floors are occupied by the Tsukishima Dormy Seniors’ Residence. The inclusion of the sub-temple in the building serves as a test case for a new style of propagating Buddhism. 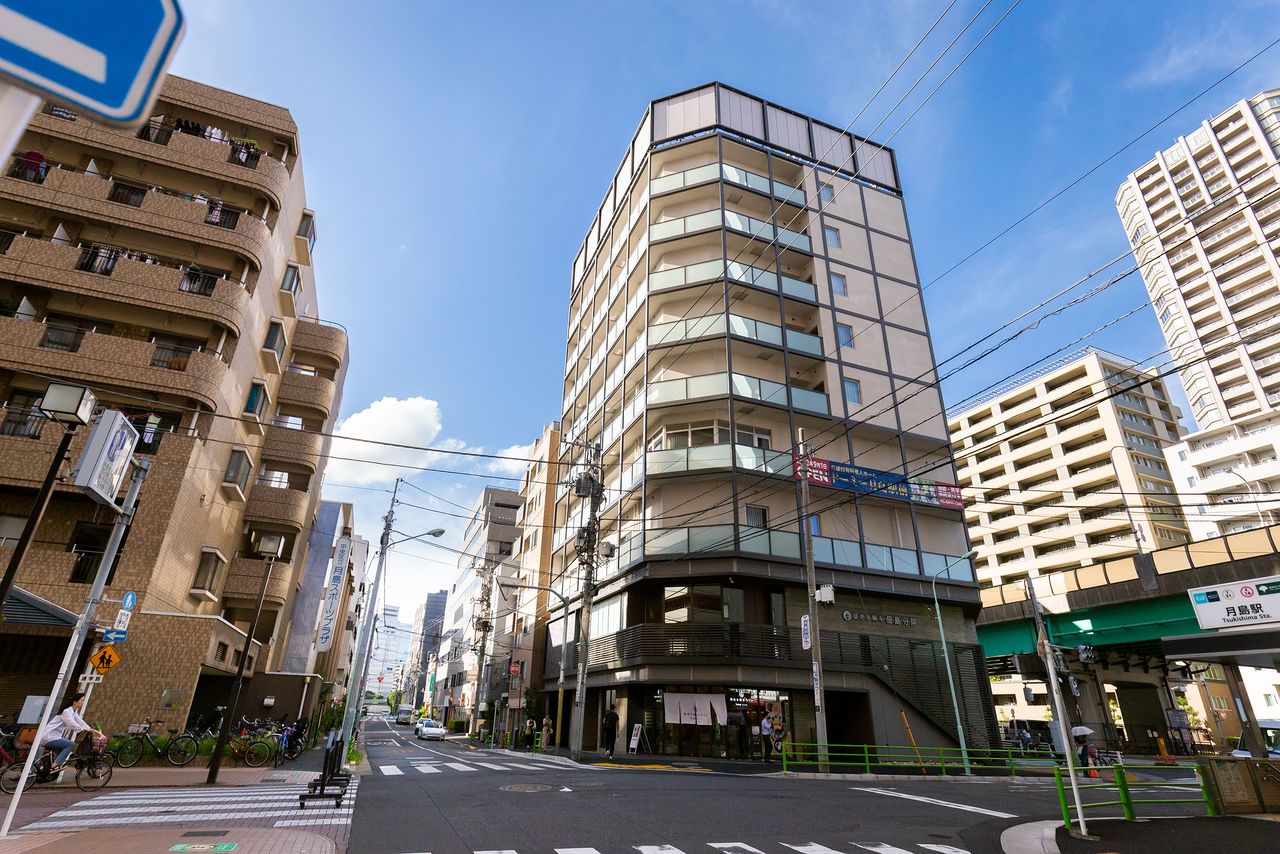 The Tsukiji Honganji Tsukuda Building is adjacent to Tsukishima Station on Tokyo Metro’s Yūrakuchō Line and the Toei Ōedo Line. 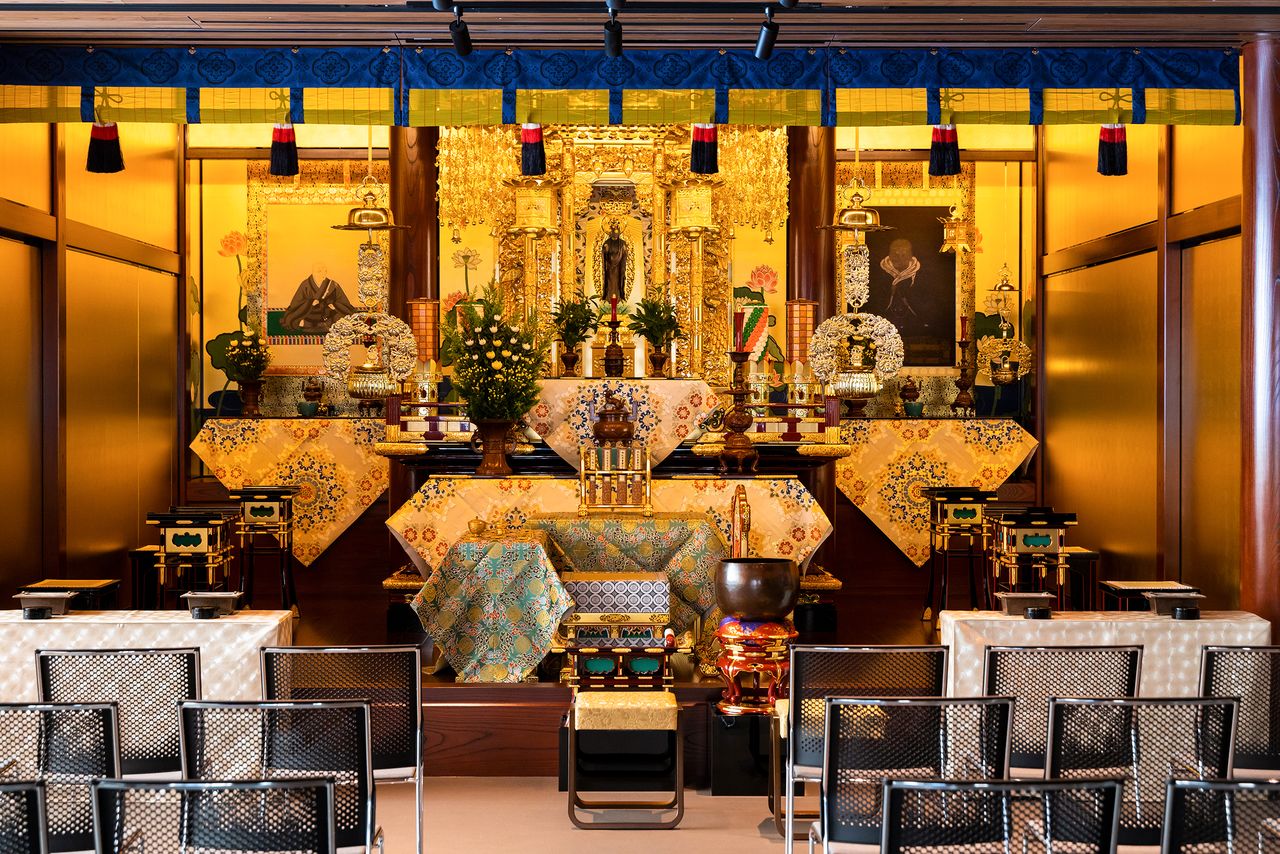 The sub-temple prayer hall on the building’s second floor. The altar is flanked by likenesses of Shinran, founder of the Jōdo Shinshū school of Buddhism, on the right and Rennyo, often referred to by Jōdo Shinshū Buddhists as the restorer of the sect, on the left.

Temple priest Higashimori Shōnin notes that today, with Japan’s population rapidly aging and fewer babies being born, Buddhist temples are struggling to remain relevant. “We can’t continue to operate by relying solely on funerals and cemeteries,” he says. “Although the Tsukuda Building is a real estate venture for the sub-temple, we wanted to offer comfort to the elderly residents of the seniors’ home and bring something of value to the Tsukudajima and Tsukishima neighborhoods.”

Seniors’ residences with attached hospital facilities are commonplace, but having a temple in the same building is an unusual arrangement. One of the aims of Tsukiji Honganji is for the sub-temple to establish connections with the living. Higashimori asserts that although Buddhism is often ridiculed as “just for funeral services,” it is essentially a guide for living a virtuous life while also offering spiritual comfort. The plan is for temple priests to visit the seniors’ residence, initiate conversations with the residents, and counsel their families.

Combining a seniors’ residence and temple might seem like it would not be well-received, but nearly two dozen people have already expressed interest in relocating to the facility. An employee of Kyōritsu Maintenance, the residence’s operator explains: “Seniors will likely spend several years here, and we provide a range of facilities to ensure their comfort. We believe that working together with Tsukiji Honganji will give residents added peace of mind.” The café on the building’s first floor will also offer a welcome diversion and serve as a spot for meeting family and friends. 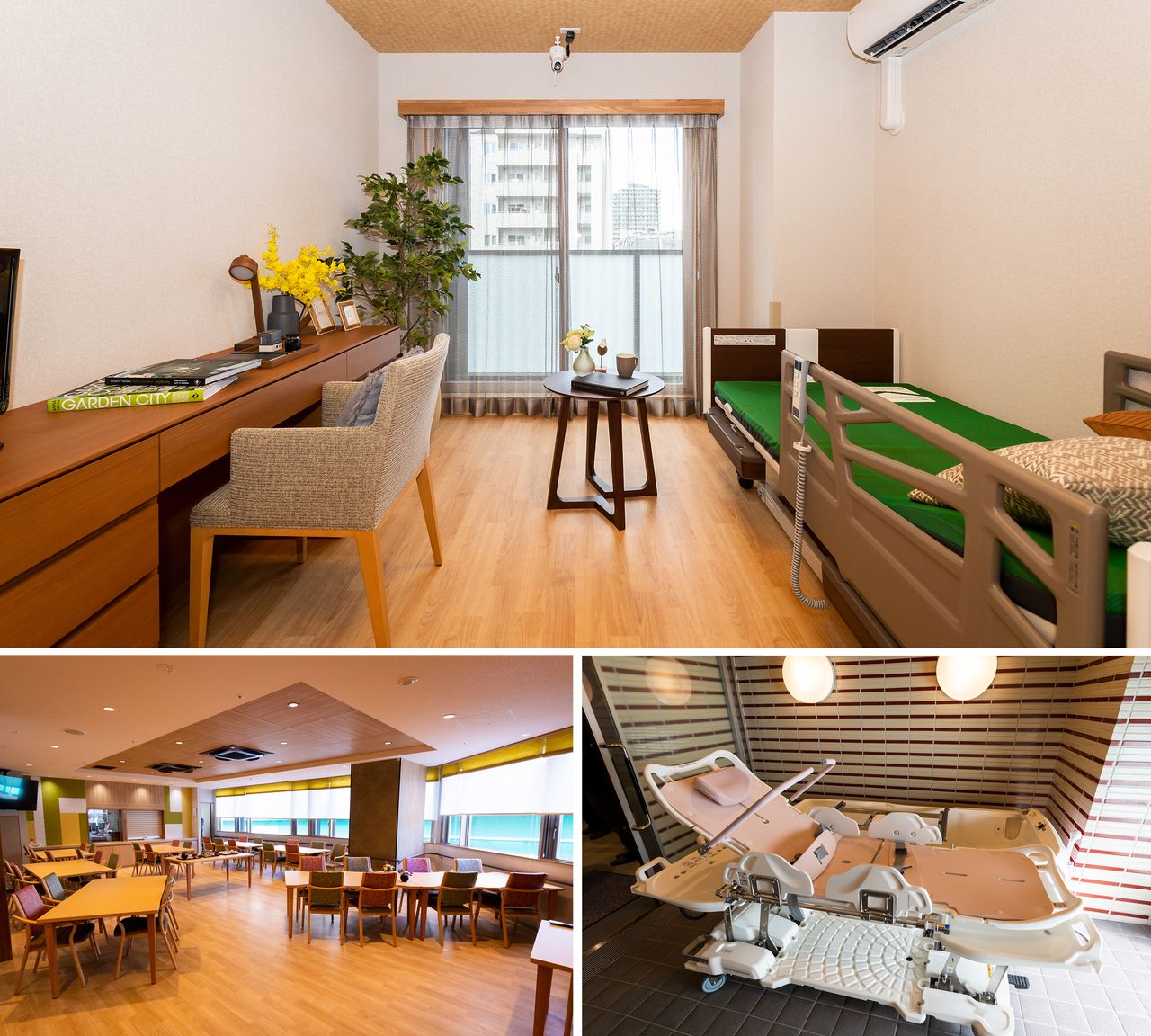 Clockwise from top: Rooms at Tsukishima Dormy Seniors’ Residence are fitted with AI sensors that can detect if a person has had a fall, and beds are equipped with mats that measure sleep quality; a mechanical bath to aid those with physical disabilities; the facility’s dining room is bright and spacious.

The Tsumugi Café offers the same popular breakfast set as the shop’s main branch at Tsukiji Honganji. Inspired by the 18 Vows of Amida Buddha, the foundational tenets of Jōdo Shinshū Buddhism, the dish consists of 18 items like tamagoyaki from Tsukiji Shōro and other delights from famous Tsukiji shops, all served with rice and mixed grains. Another popular item is a set consisting of shio daifuku, a bean paste confectionery, and a beverage.

Adjacent to the café are a private space for nursing mothers and accessible toilet facilities open to the general public. The Tsukudajima sub-temple welcomes not just neighborhood residents but also visitors to Tsukishima Monja shopping street and history buffs exploring this historic area of Tokyo. 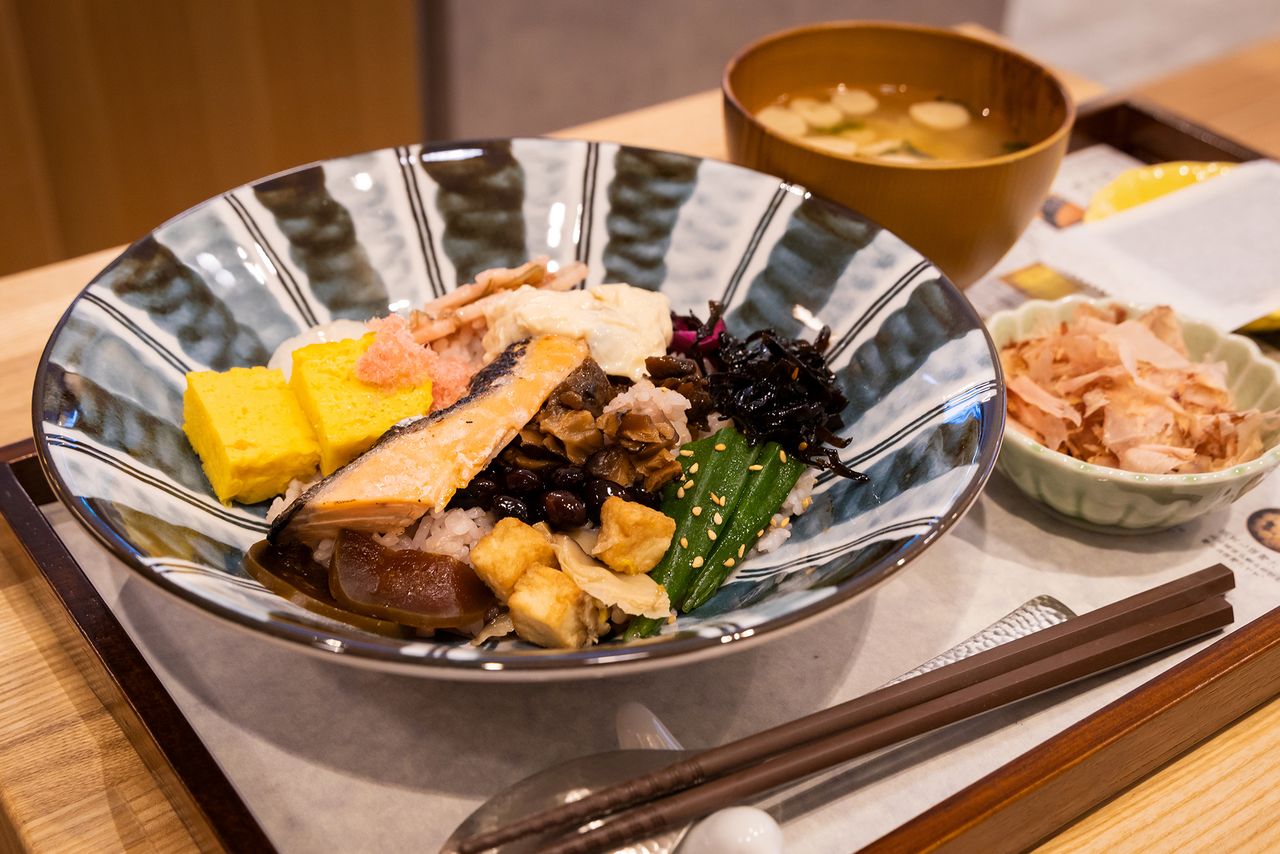 The 18-item Buddha Bowl delights the taste buds with delectable ingredients from shops around Tsukiji. 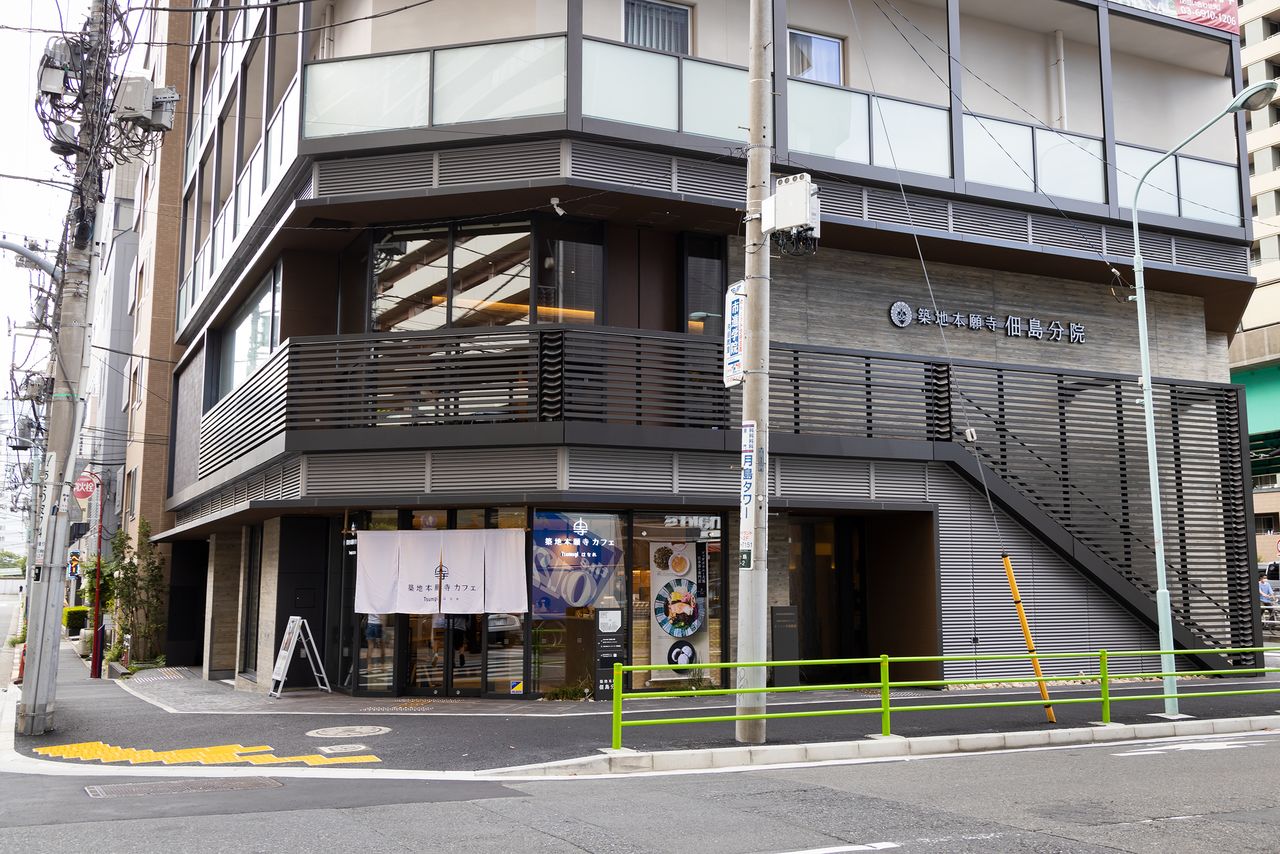 The Tsukishima branch of Tsumugi Café. The stairs on the right lead up to the Tsukudajima sub-temple.

Tsukudajima and Tsukiji Honganji have an interesting side story. In 1617, Kyoto’s Nishi Honganji, the head temple of the Jōdo Shinshū Honganji sub-sect, built the temple Asakusa Gobō in Nihonbashi, but the temple burned down in the Great Fire of Meireki (1657). The shogunate in the process of reorganizing the city’s layout prohibited the temple to be rebuilt on the same site. Among the alternative plots offered, the largest was a sandy spit of land barely above the waters of Edo Bay. Reclamation work, carried out mainly by the fishermen of Tsukudajima, created what is now the neighborhood of Tsukiji.

At the time, most of the residents of Tsukudajima hailed from the village of Tsukuda in Settsu province (today’s Osaka). Founding shōgun Tokugawa Ieyasu relocated Tsukuda fishermen to Edo to help feed the capital’s rapidly growing population. They were granted special fishing rights in the bay, exempted from having to pay a land tax, and given the use of sandbars. They reclaimed the land there and named their neighborhood Tsukudajima after their place of origin.

Many Tsukuda village people were devotees of the Jōdo Shinshū head temple, Ishiyama Honganji, which stood in Osaka until 1580. When it came time to create an offshoot temple in Edo, it is easy to imagine that the people were in favor of building it near Tsukudajima where they lived, and they offered to build up the low-lying ground for the temple. Even though the site was less than ideal, Tsukiji Honganji agreed and was thus able to establish itself on a large plot. 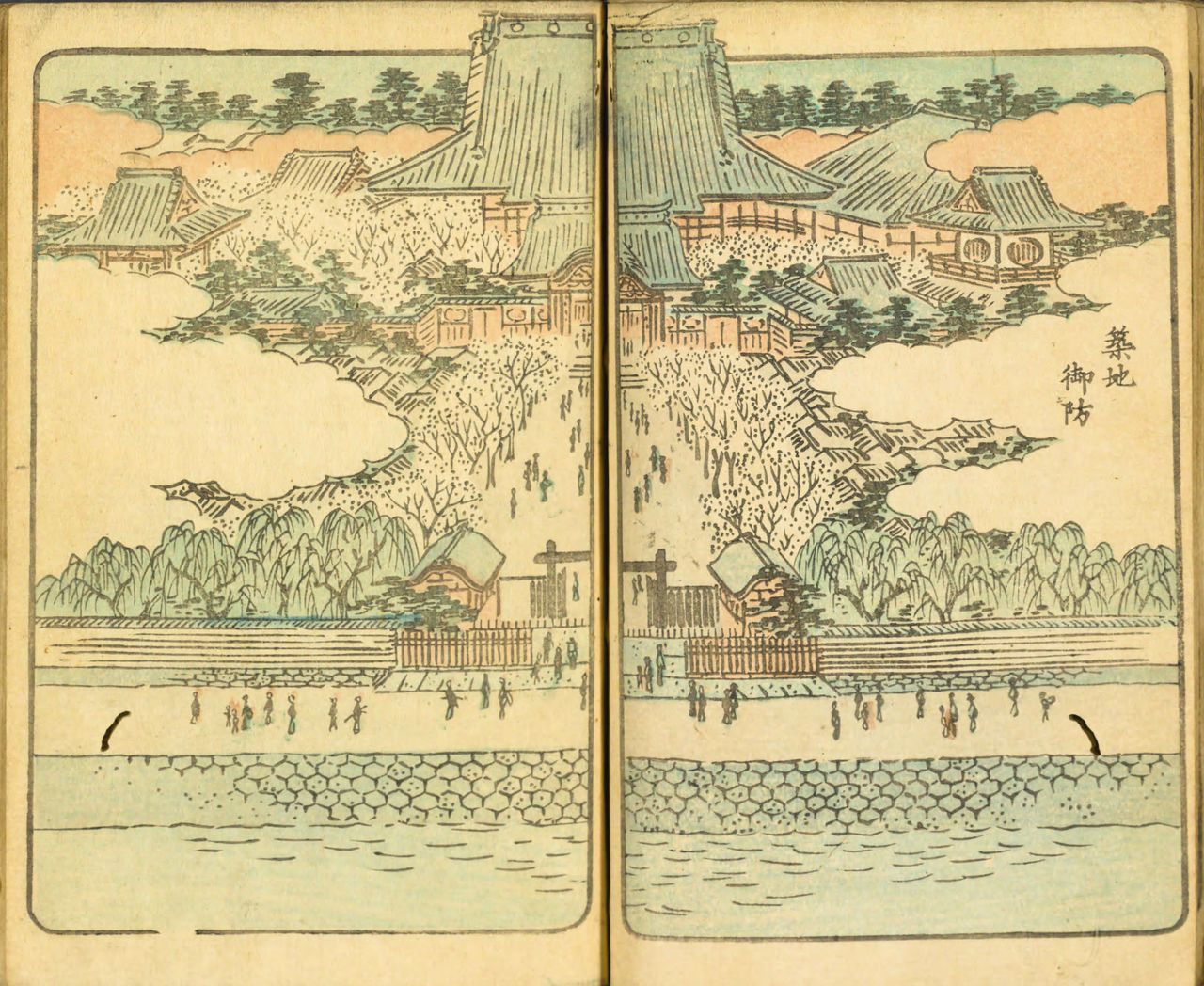 The “Temple at Tsukiji,” from a collection of prints depicting scenes of Edo, created by Utagawa Hiroshige and printed between 1850 and 1867. At the time, the temple faced southwest, and the road in front was near the present-day Tsukiji Outer Market’s Namiyoke-dōri. This print shows how close the temple was to the waters of Edo Bay. (Courtesy of the National Diet Library)

The folks of Tsukudajima were merchants as well as fishermen. After delivering their catches to the shogunate, they set up a market at Nihonbashi to sell the surplus. This Nihonbashi Fish Market continued to prosper after the Meiji Restoration of 1867 but was wiped out in the 1923 Great Kantō Earthquake. Several alternative sites were proposed in the aftermath, but Tsukudajima power brokers prevailed to have the market rebuilt on a site southwest of Tsukiji Honganji.

Until it closed in 2018, Tsukiji was known throughout the world, thanks to the popularity of sushi and the huge variety of fresh fish the market handled. While the wholesale market itself was demolished, the Tsukiji Outer Market still exists, attracting visitors from around the country and overseas. Many drop by Tsukiji Honganji to offer a prayer too, and the Outer Market plays a vital role in supporting the temple.

The temple burned to the ground in the 1923 earthquake and was later rebuilt with a splendid main hall incorporating many decorative motifs evoking India, the birthplace of Buddhism. A commemorative service on the anniversary of the Great Kantō Earthquake was held at Tsukiji Honganji on September 1 of this year, the day of the opening of the Tsukiji Honganji Tsukuda Building. The temple would not exist today if it had not been for the fishermen of Tsukudajima, and now it is the temple’s turn to support the community. The new building is set to become a local landmark. 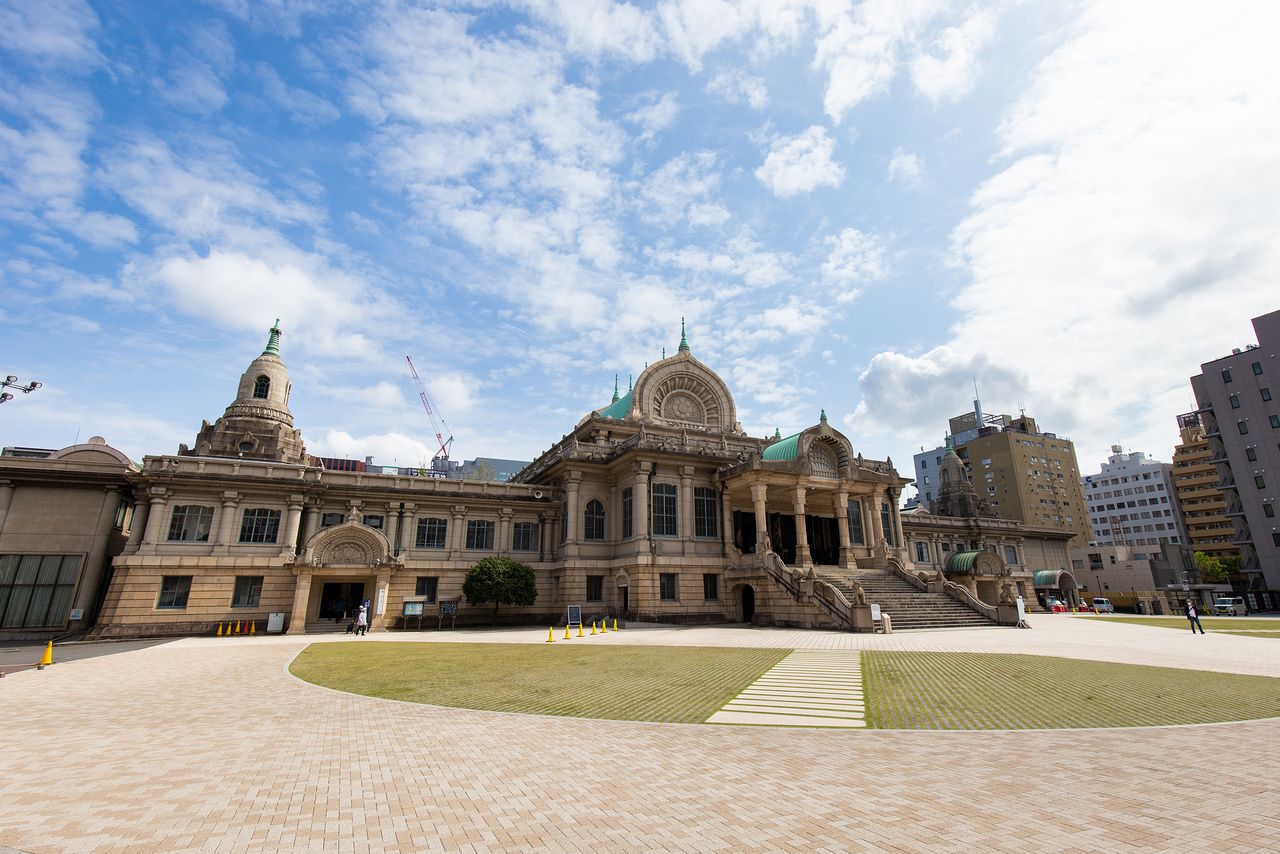 The inhabitants of Tsukudajima played an important role in establishing the historic Tsukiji Honganji.