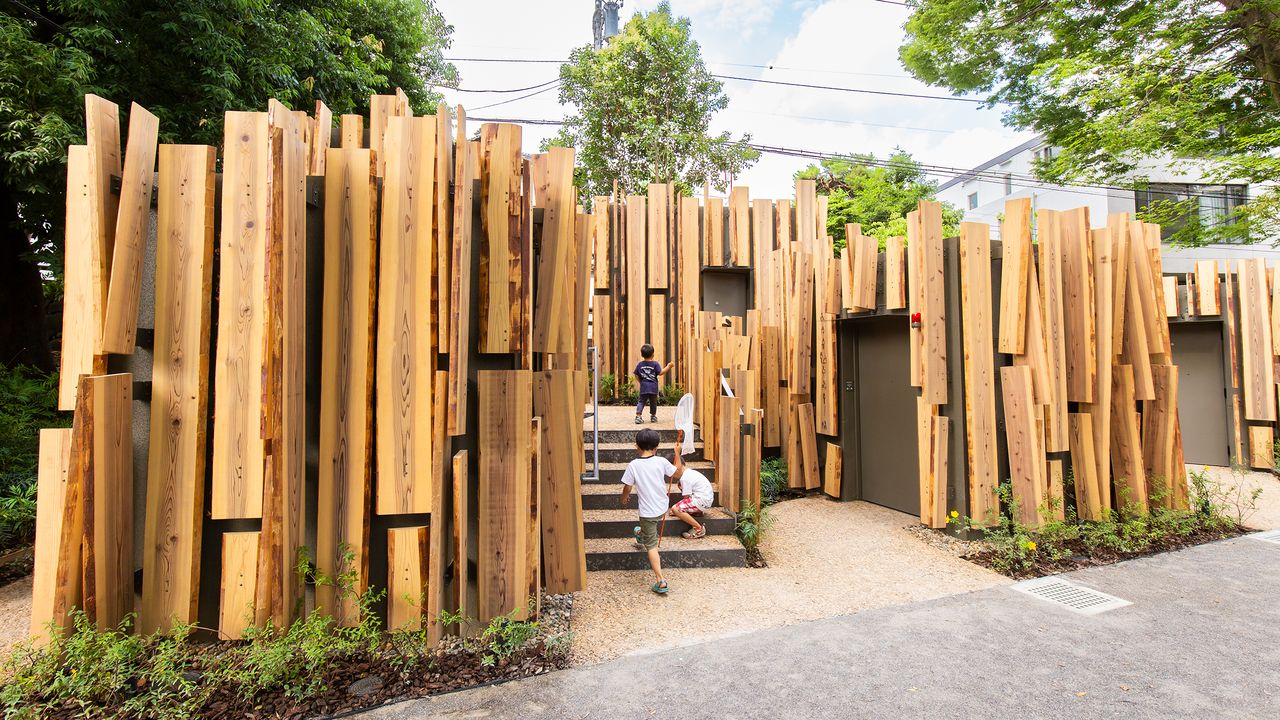 Lifestyle Design Art Nov 10, 2022
The Tokyo Toilet Project created a splash in August 2020 with the inauguration of two see-through public toilets in Shibuya. Since then, other similarly distinctive facilities have sprung up throughout the area. These public toilets are kept scrupulously clean and may soon become tourist attractions in their own right.

On October 8, a cleaning crew consisting of preschoolers and schoolchildren equipped with floor brushes and sturdy cloths assembled at Ebisu Park in Shibuya, Tokyo. They were there to clean the maze-like concrete public toilet created by interior designer Katayama Masamichi, whose impressive portfolio more notably includes the interiors of Uniqlo’s flagship New York, Paris, and Ginza stores. This washroom is part of the Tokyo Toilet Project, an initiative by the Nippon Foundation in cooperation with the Shibuya municipal government. 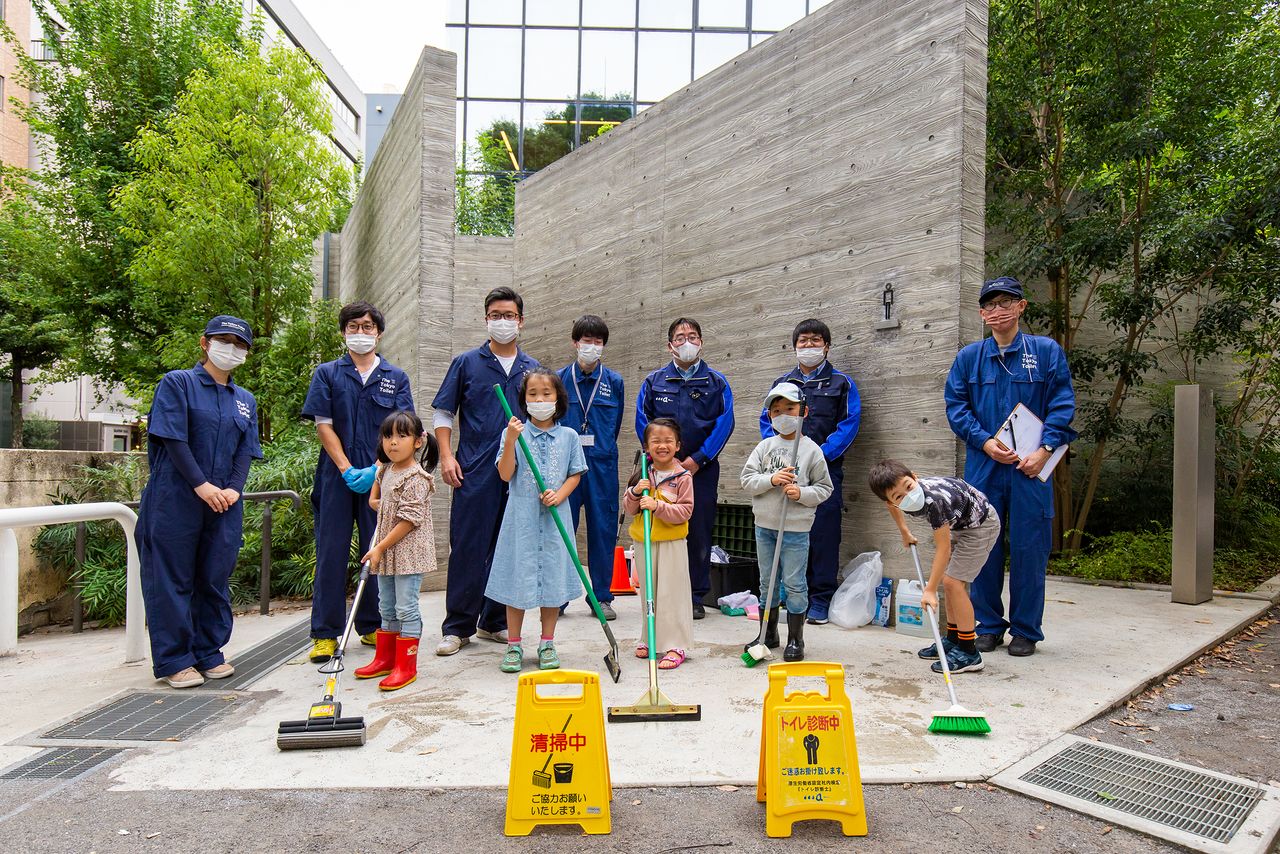 The cleaning team at the Ebisu Park toilet, which opened in August 2020.

The Tokyo Toilet Project brought together a total of 16 well-known creators, from architects Andō Tadao and Kuma Kengo to art directors Katayama and Satō Kashiwa to fashion designer Nigo, originator of the A Bathing Ape urban clothing brand. The project aims to do away with perceptions that public toilets are smelly, dark, dirty, and dangerous by adopting innovative, imaginative designs for the facilities. The toilets are also meant to accommodate people of all ages, genders, and physical abilities.

The project’s first toilet, designed by architect Ban Shigeru and featuring transparent glass walls, set social media abuzz around the world when it opened in August 2020. At present, 13 of the planned 17 toilets have been completed and are in use. 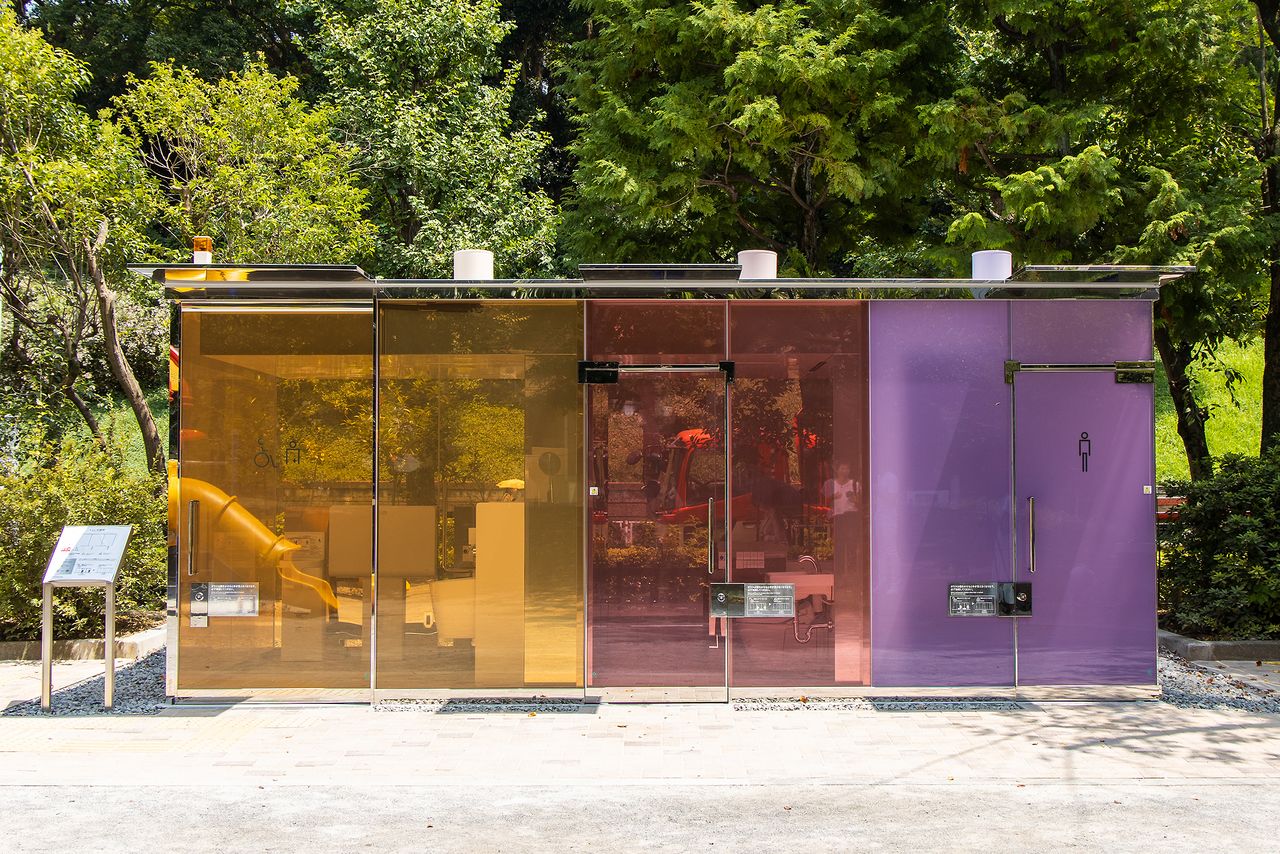 The see-through toilets at Yoyogi Fukamachi Minipark. Locking the door turns the glass opaque, as seen on the far right. 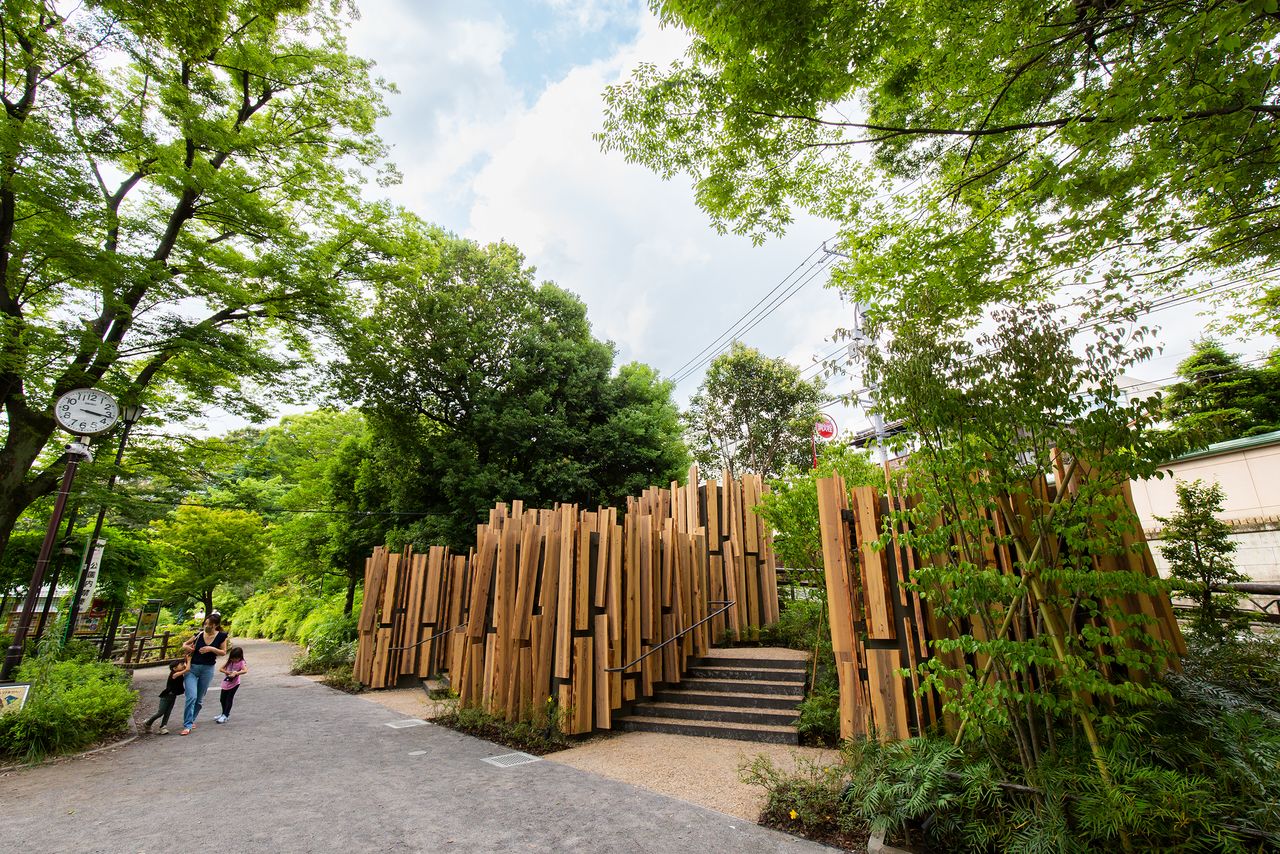 Kuma Kengo’s signature use of wood helps the facility at the Nabeshima Shōtō Park, completed in June 2021, blend in with the greenery.

Cleaning Part of the Project Too

No matter how stylishly designed, public toilets lose their allure if they are not clean, which is why the project also aims to keep the facilities in tip-top shape. Each of the project’s toilets are cleaned three times a day and undergo a monthly check by a toilet consultant. The toilets are also regularly subjected to deep-cleaning using solvents and other products specially designed for the task. Exterior surfaces, lighting, and ventilation undergo maintenance once a year as well. What is more, cleaning staff wear stylish overalls designed by Nigo, helping give the task a more positive image.

Hands-on cleaning experience for children is also part of the project, with the aim being to instill in young participants the importance of maintaining public facilities, helping ensure that they grow up to be responsible adults. Yamato Nobutaka, a toilet consultant at cleaning and maintenance service company Amenity, conducted the cleaning tutorial at the Ebisu Park facility and says that children have already learned, at home and at school, that keeping toilets clean is important. He hopes they will tell their friends about their experience. 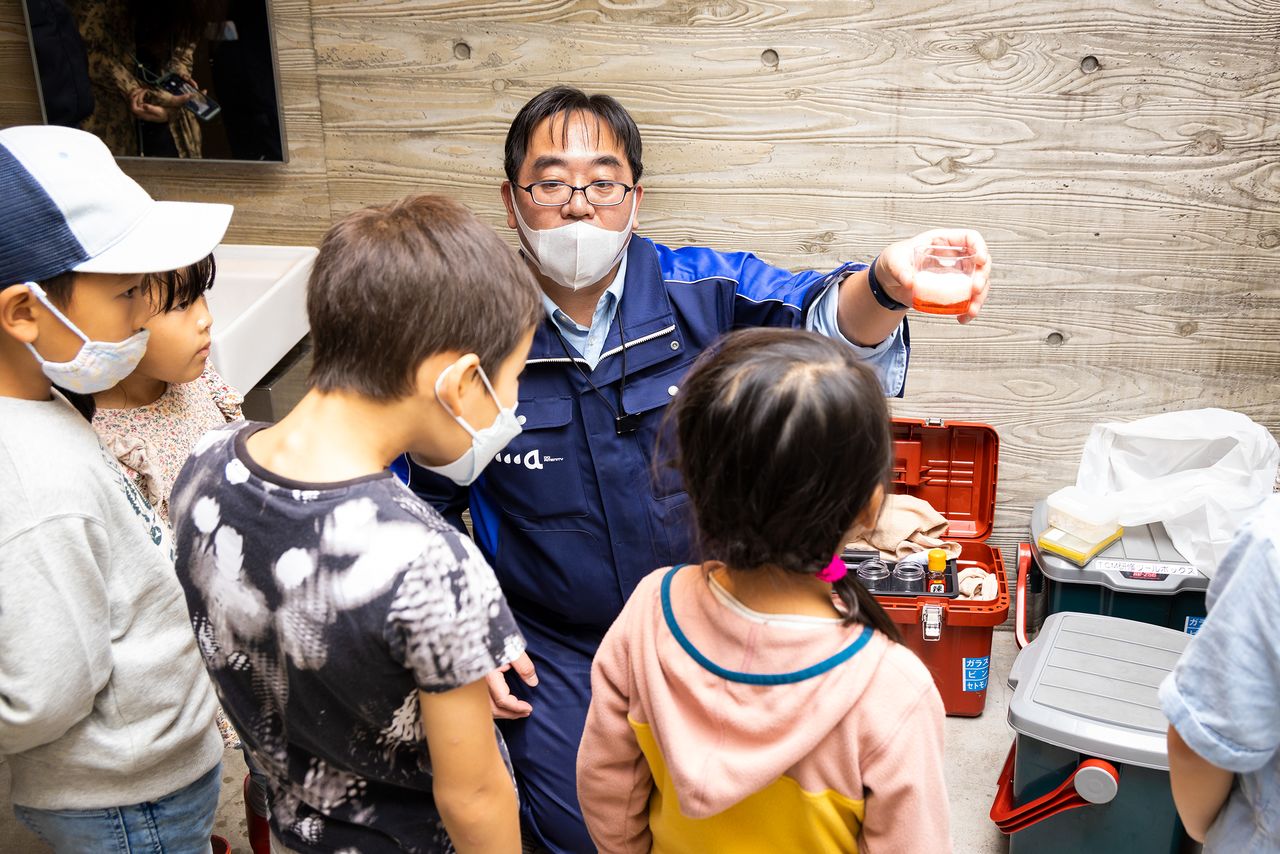 Yamato explains different types of cleaners and how they work. 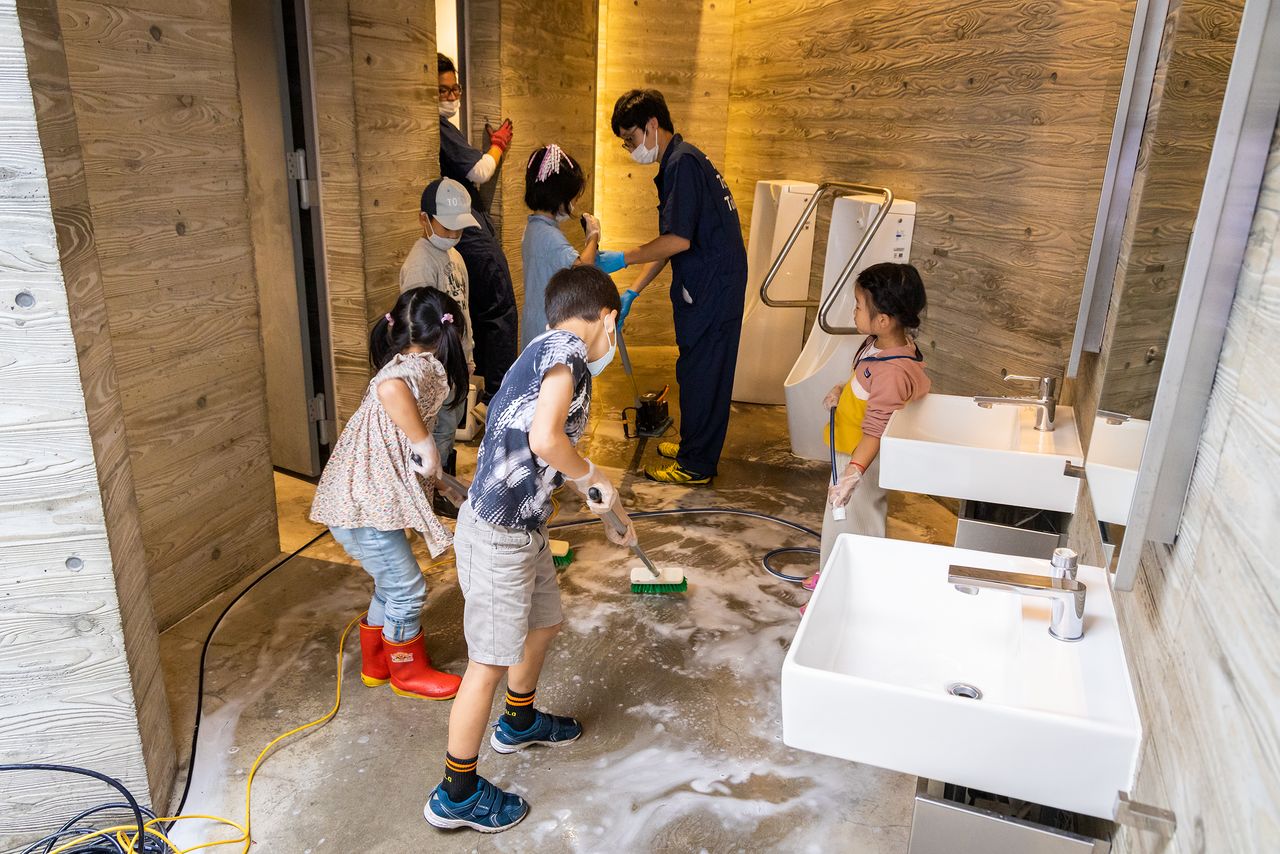 Architecture fans and art lovers are already touring the project’s oeuvre. Restaurants popular partly for their clean restrooms are already a thing, but toilets themselves being a tourism asset has never been heard of before. Yamato points out that clean public restrooms help improve a neighborhood’s image. “Shibuya draws people day and night, and there are plenty of toilets that are not well kept,” he declares. “We intend to do a thorough toilet maintenance job.”

Another eye-catching restroom is the “Hi Toilet” in Nanagō Dōri Park. Designed by Satō Kazoo and his award-winning team, it features in a film on the Tokyo Toilet Project now being made by acclaimed German film director Wim Wenders. Here we take a look at six of the most recently inaugurated facilities, opened between 2021 and October 2022. 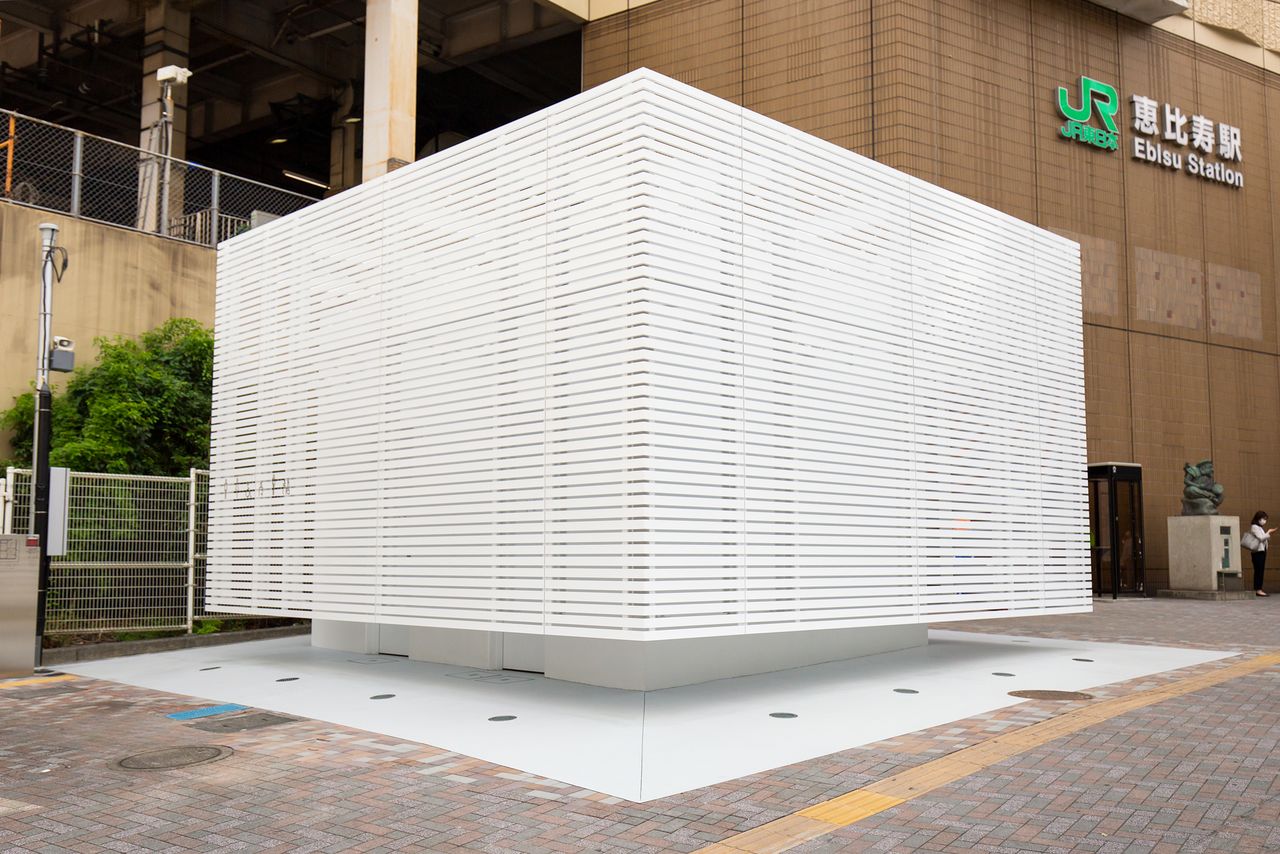 This huge white structure at the west exit of Ebisu Station, completed in July 2021, was designed by Satō Kashiwa. This toilet gets a lot of traffic, and keeping it sparkling clean is a big job. 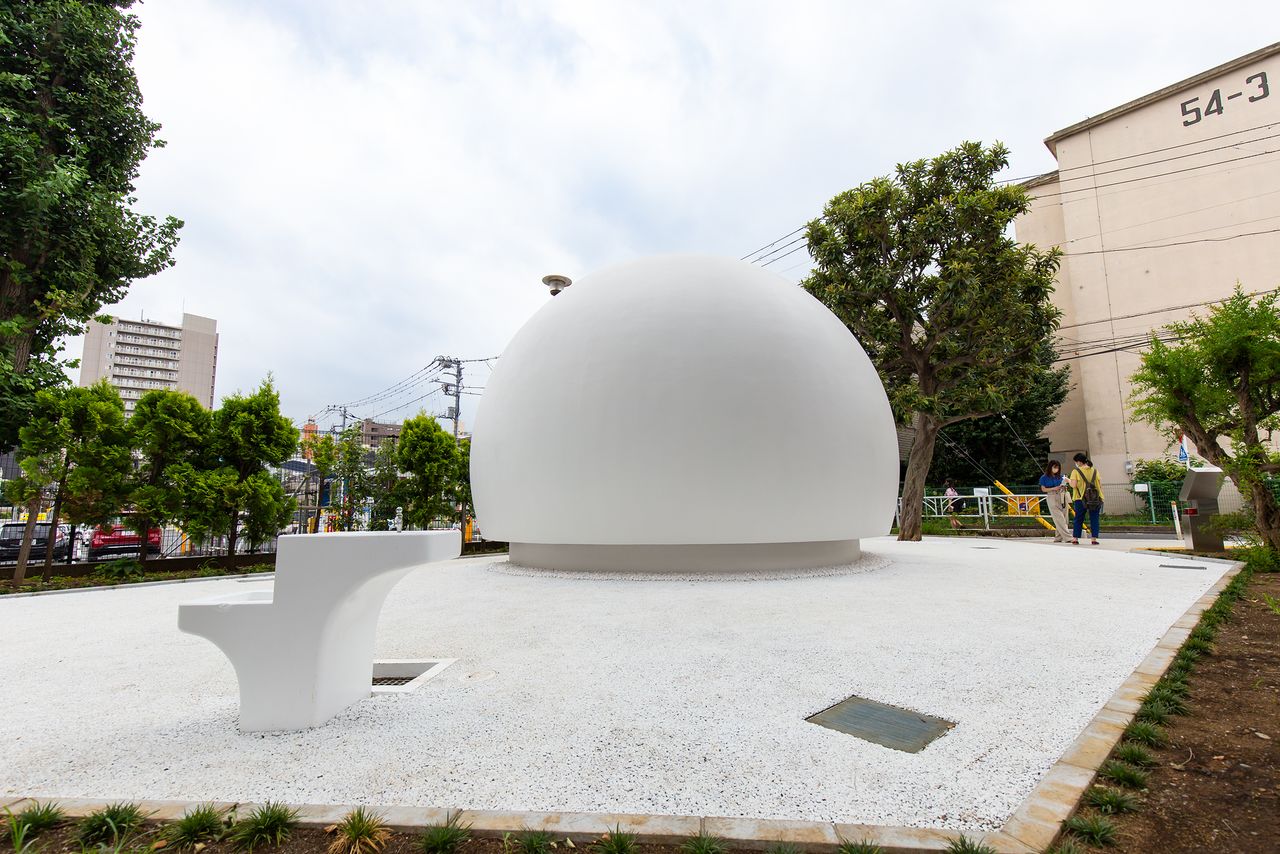 Completed August 2021, the public toilets at the Nagagō Dōri Park are activated by voice command, allowing a contactless experience.

Fashion design Nigo got his start in the trendy Harajuku district and now serves as artistic director for designer Kenzo. The theme of his contribution, near his base in Jingūmae, is “learning from the past.” His design, which blends newness with the retro feel of American military housing, is a suitable addition to the neighborhood, one of the first places in Tokyo where American culture established a foothold after World War II. 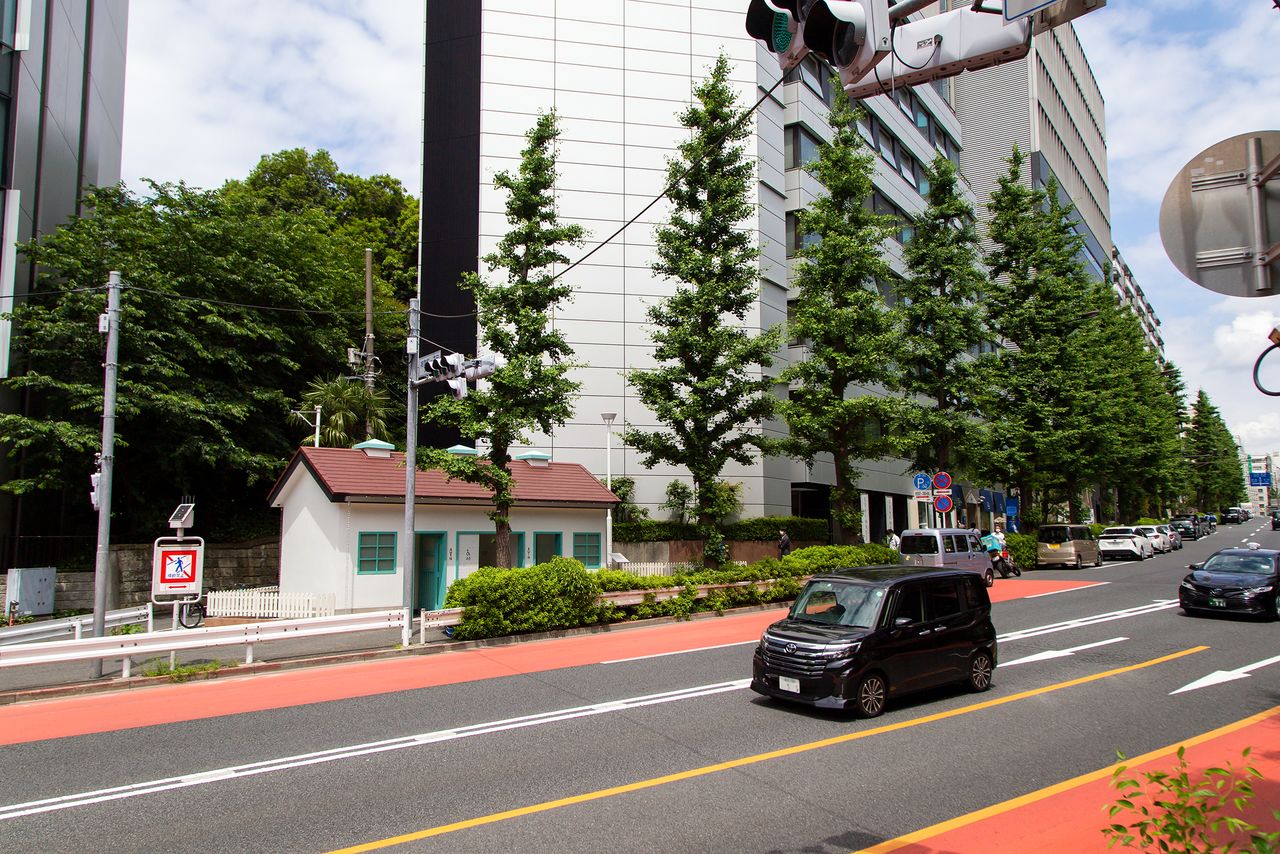 The homely structure, completed in May 2021, nestles amid the bustle of the big city. 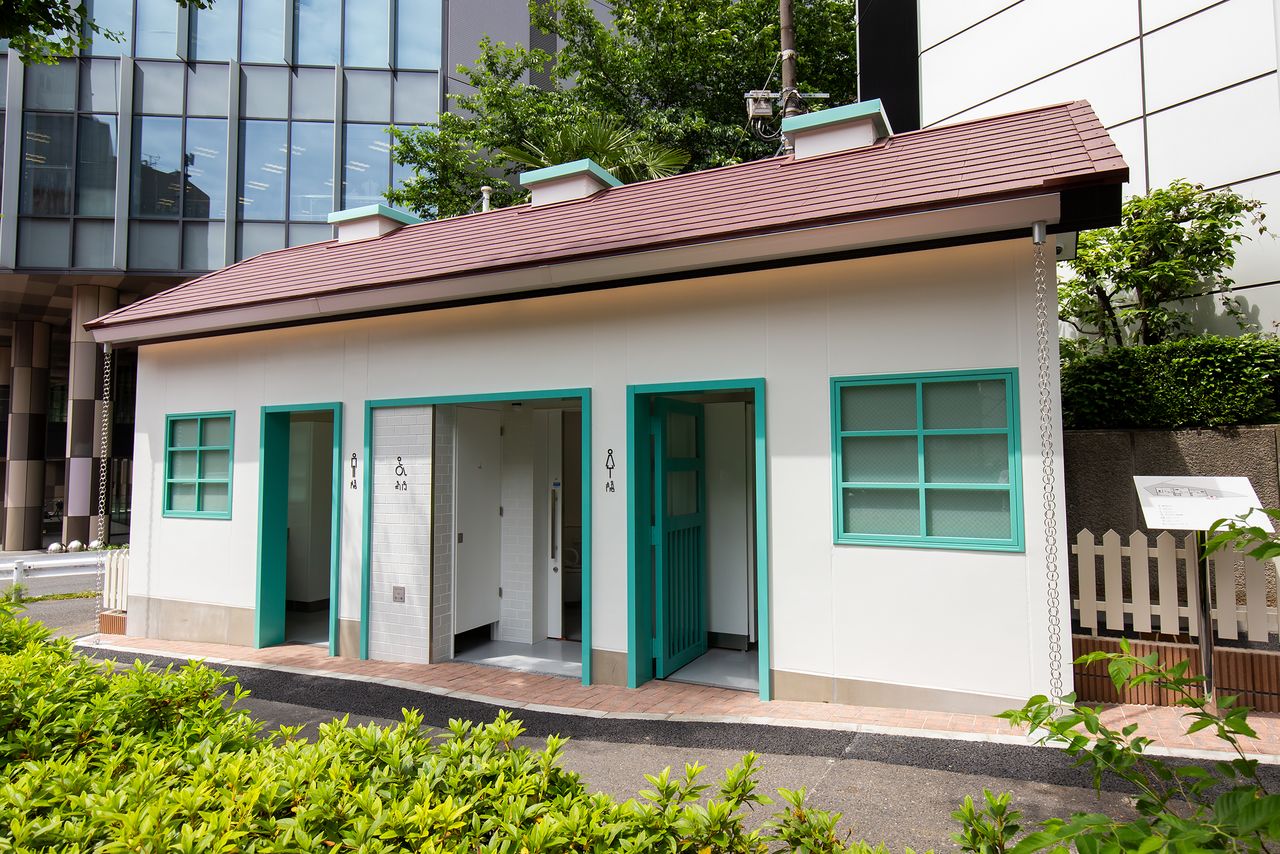 The structure’s retro look brings to mind Washington Heights, a housing complex for US military forces during the postwar occupation that stood near Yoyogi Park.

Amenities inside include a bidet toilet with heated seat, an ostomate toilet, and a wall-mounted child seat.

Kuma Kengo, the architect known for abundant use of wood in his design for Tokyo’s National Stadium, uses wood here too. The structure’s imposing presence is designed to harmonize with the park, formerly part of a villa belonging to the Kishū branch of the Tokugawa family. The five cedar-clad toilet stalls are linked by a boardwalk dubbed a “forest path.” This winding path helps with air circulation and is also popular with children, for whom it is a fascinating playground. 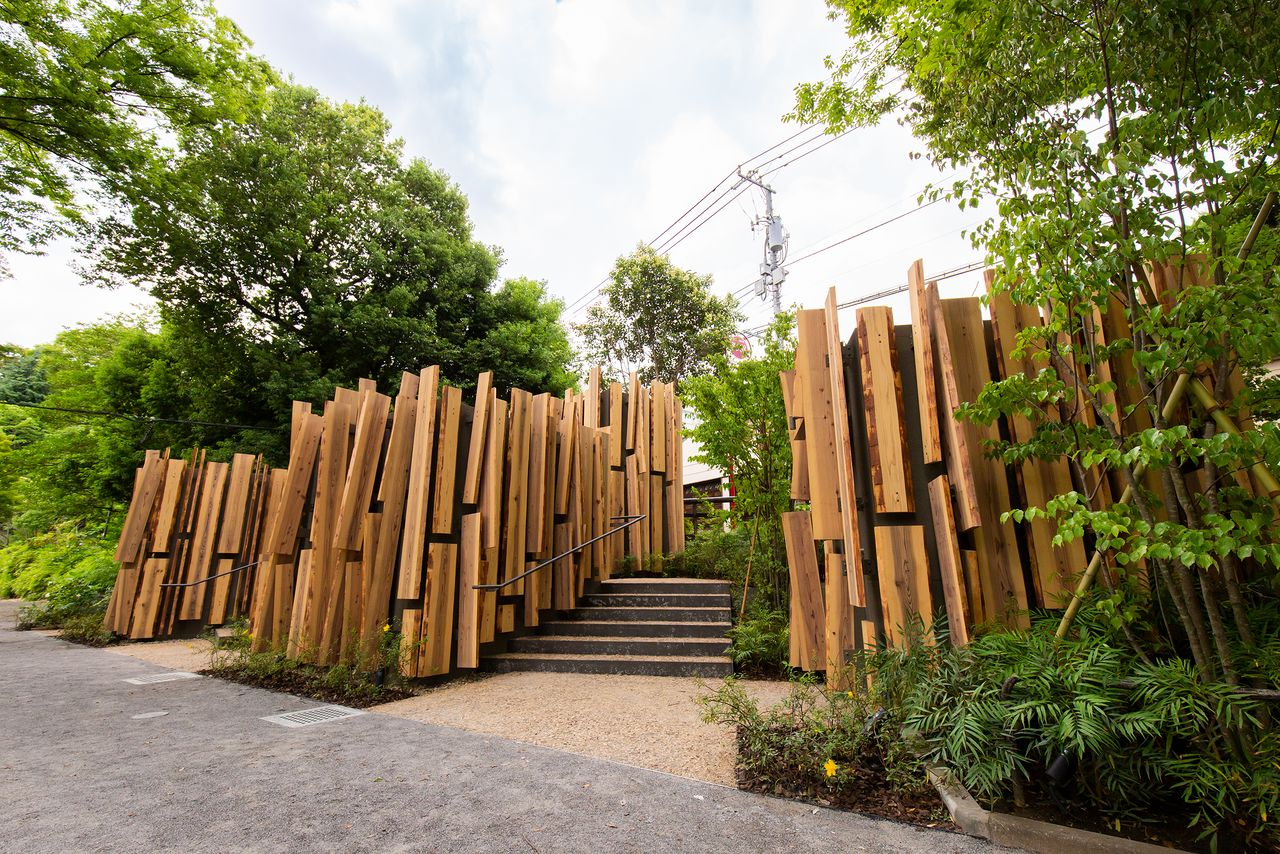 Vertical boards of differing lengths and widths were seemingly installed haphazardly, but they are in fact part of a carefully calculated design. 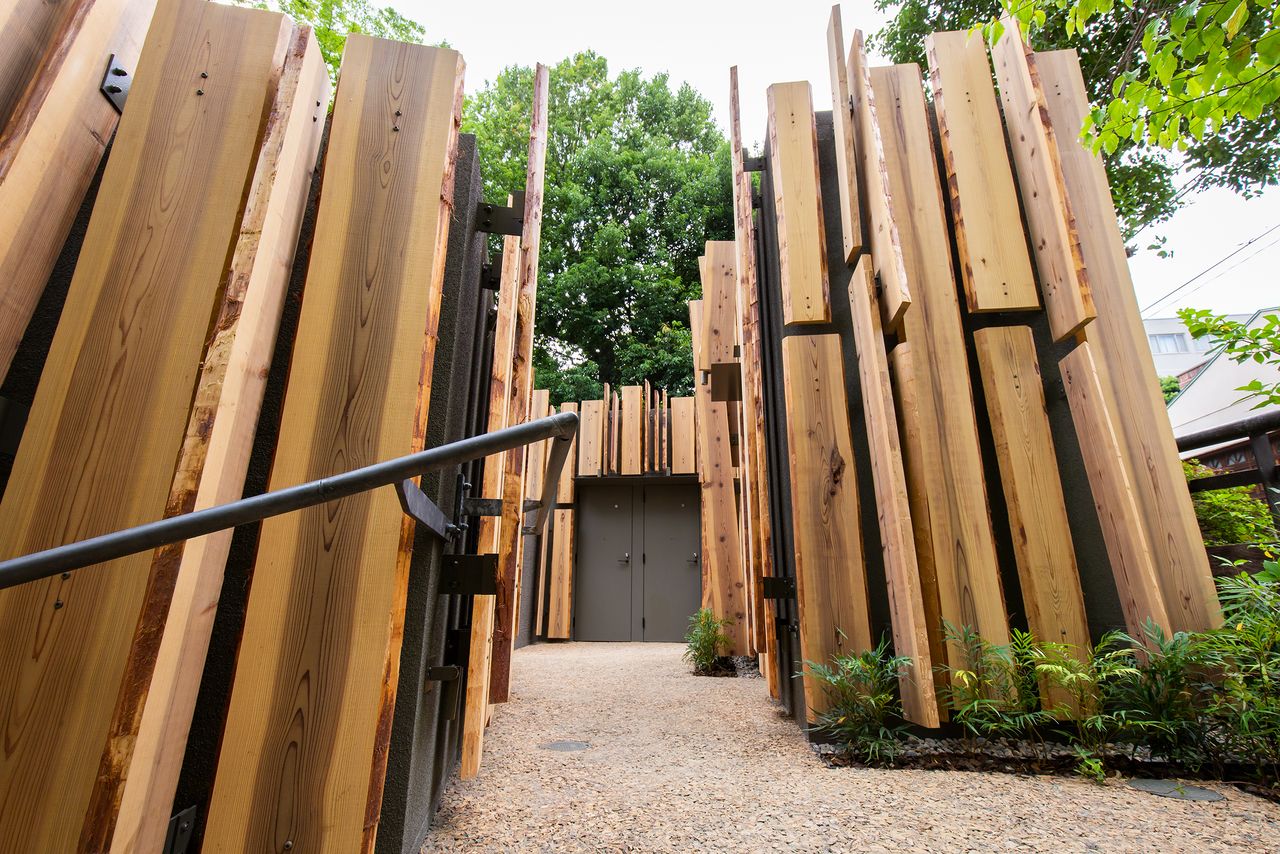 The path to the toilets catches breezes and gives a feeling of safety. 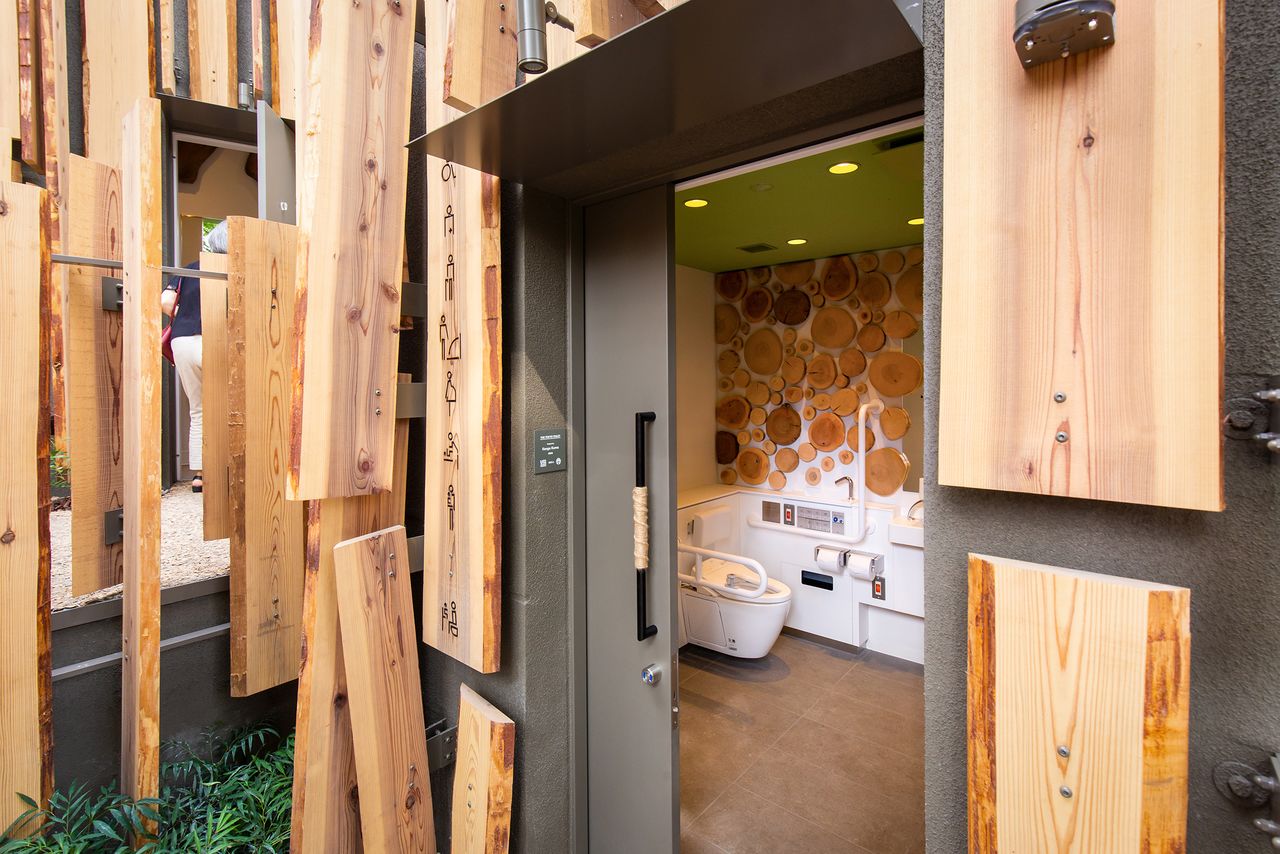 The stalls have a woodsy feeling too.

Itō Toyō, recipient of the Pritzker Prize for architecture, created toilets resembling three mushrooms sprouting from the forest of neighboring Yoyogi Hachiman Shrine. The round, tiled structures feature a beautiful ombré color scheme that blends seamlessly with the surrounding greenery. There are three toilets in all, each equipped with a wall-mounted baby seat and other functional features. 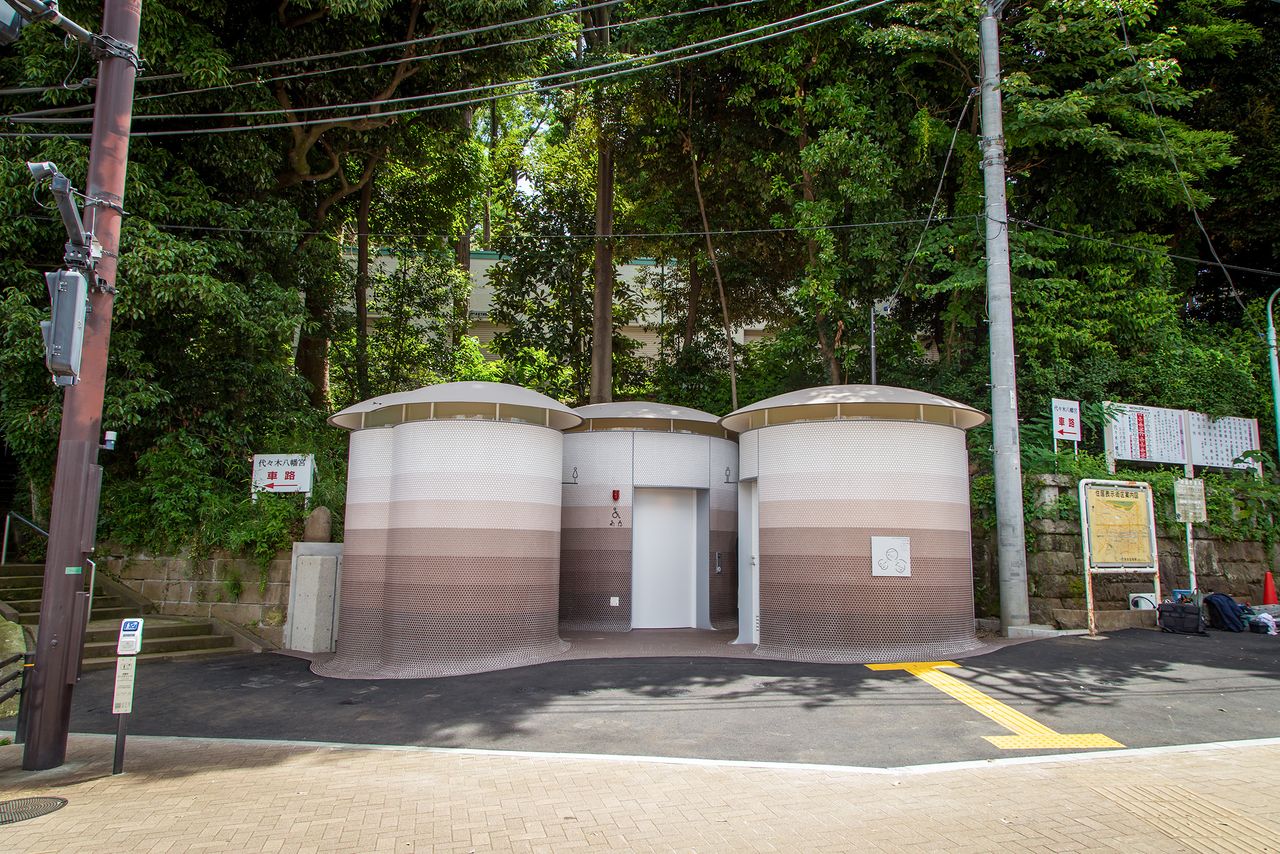 The concept behind these public toilets, completed in July 2021, is “three mushrooms in the forest.” 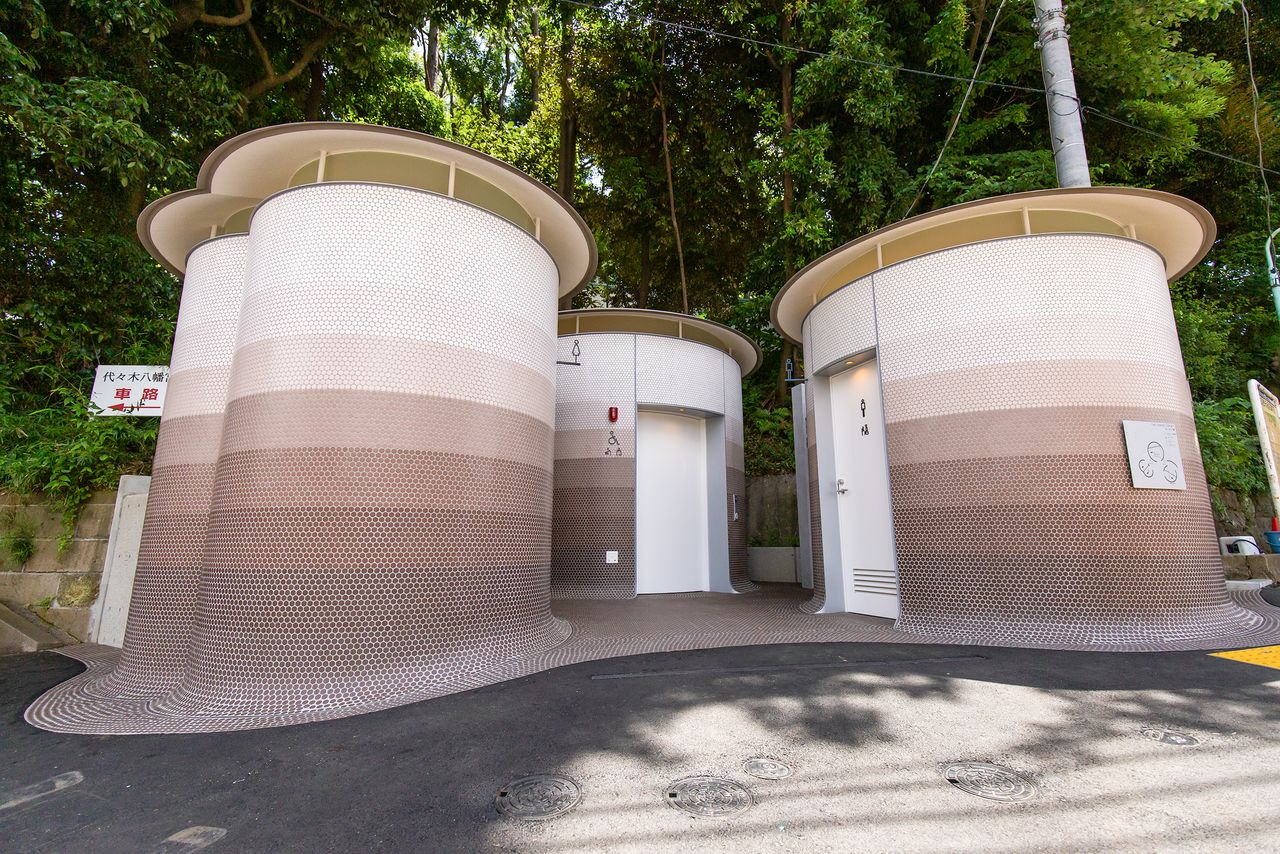 When lit up at night, the round roofs appear to float. 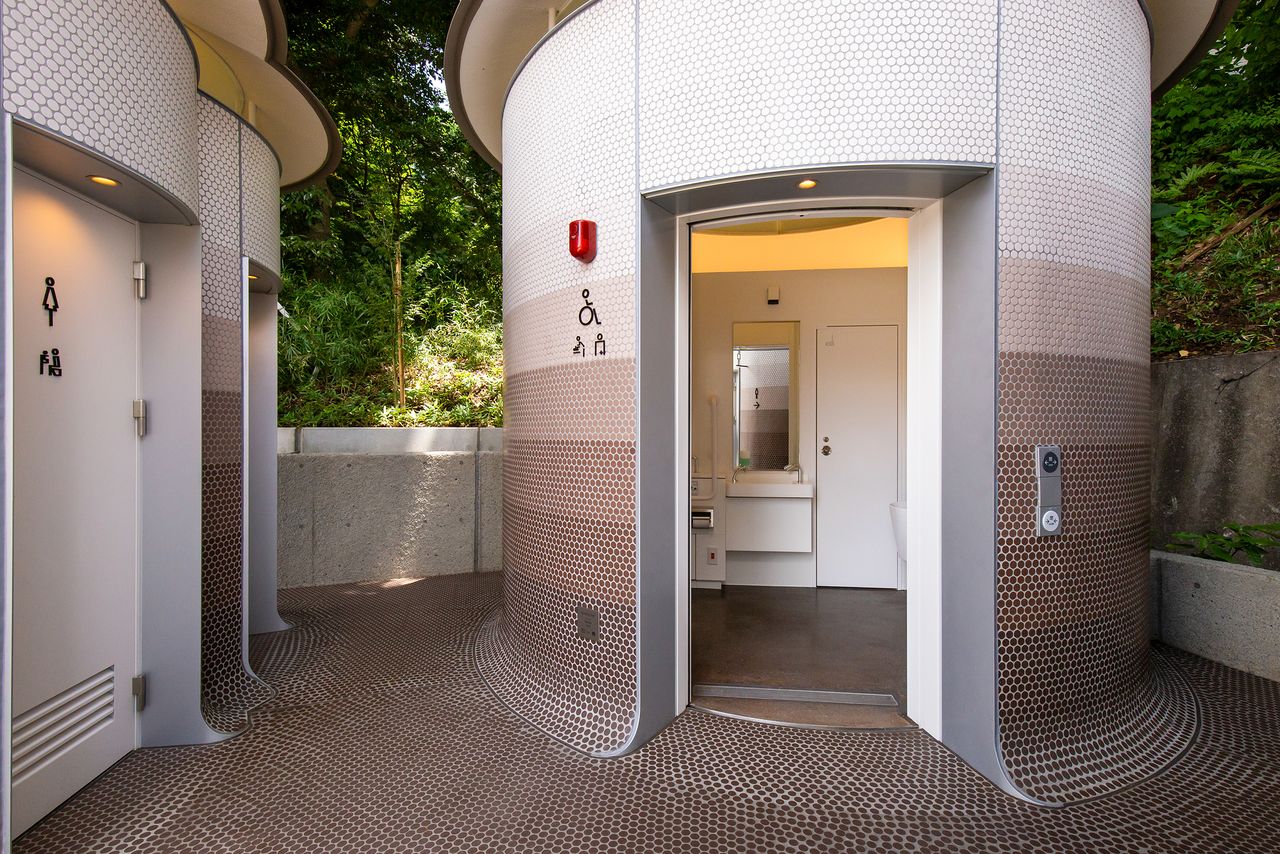 The spacious stalls are designed to easily accommodate wheelchairs.

Creator of brand strategies for companies like Uniqlo and the Rakuten Group, Satō Kashiwa is one of Japan’s best-known art directors. This pure white cube, whose utter simplicity stimulates human emotion, represents the essence of Satō’s design philosophy. 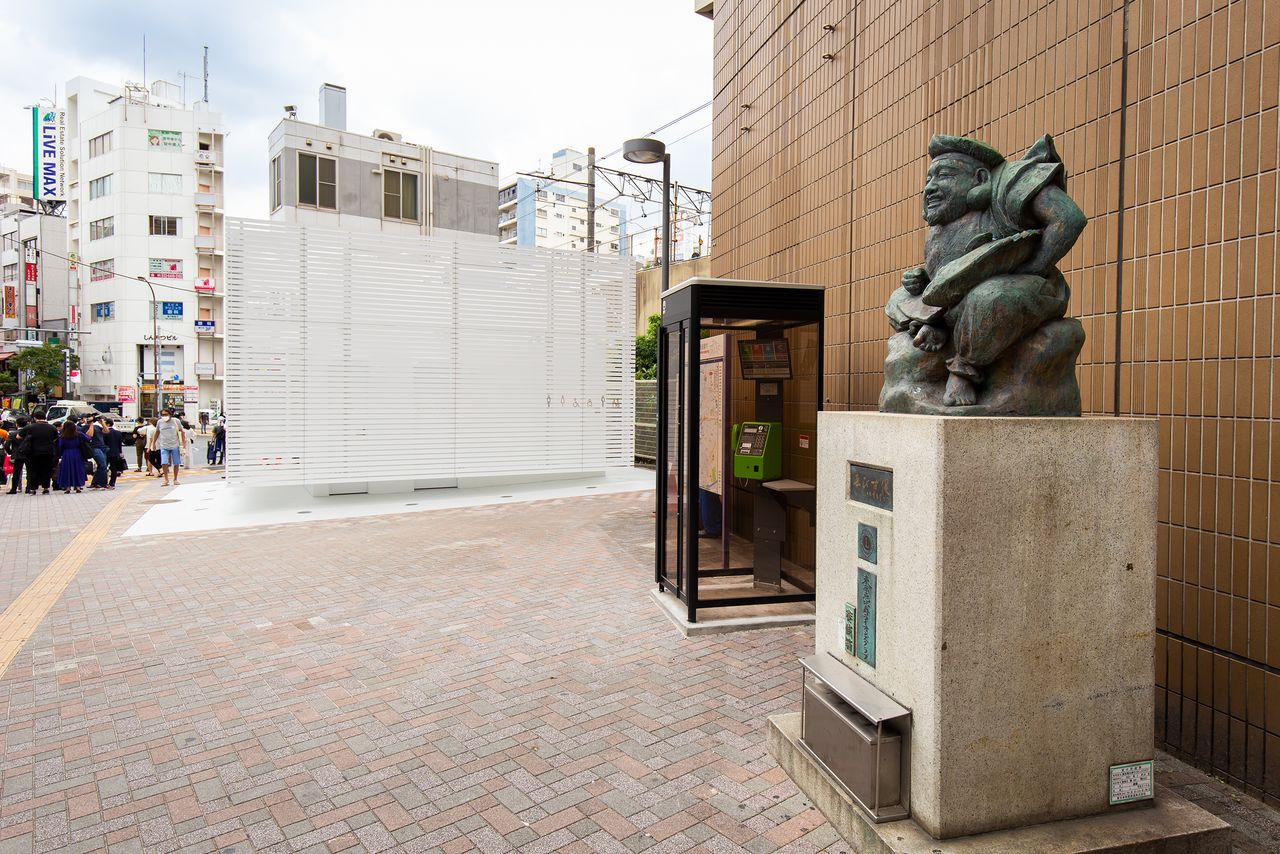 A figure of Ebisu, one of the Seven Gods of Fortune, and the Ebisu Station West Exit facility in the background. 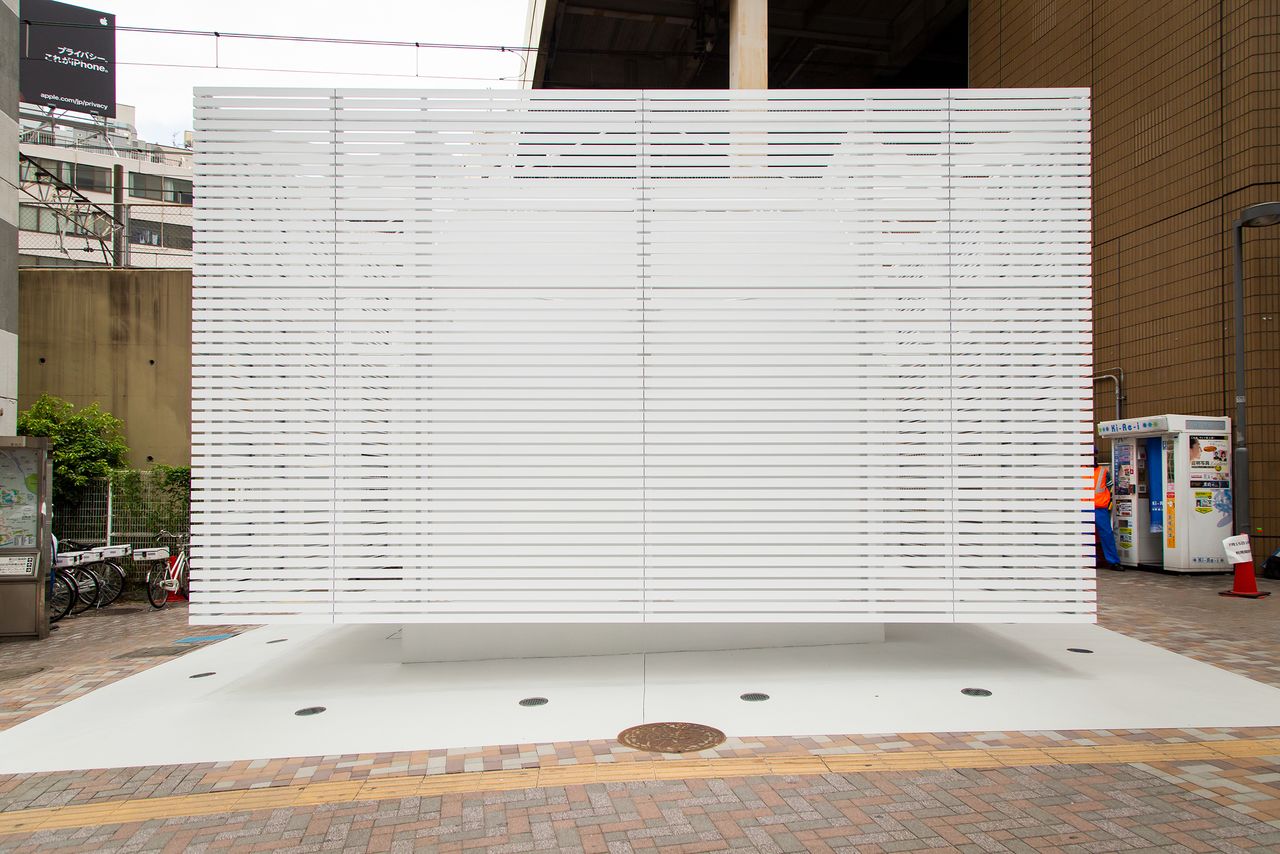 Aluminum louvers camouflage the toilet structure, so its purpose is not immediately apparent. 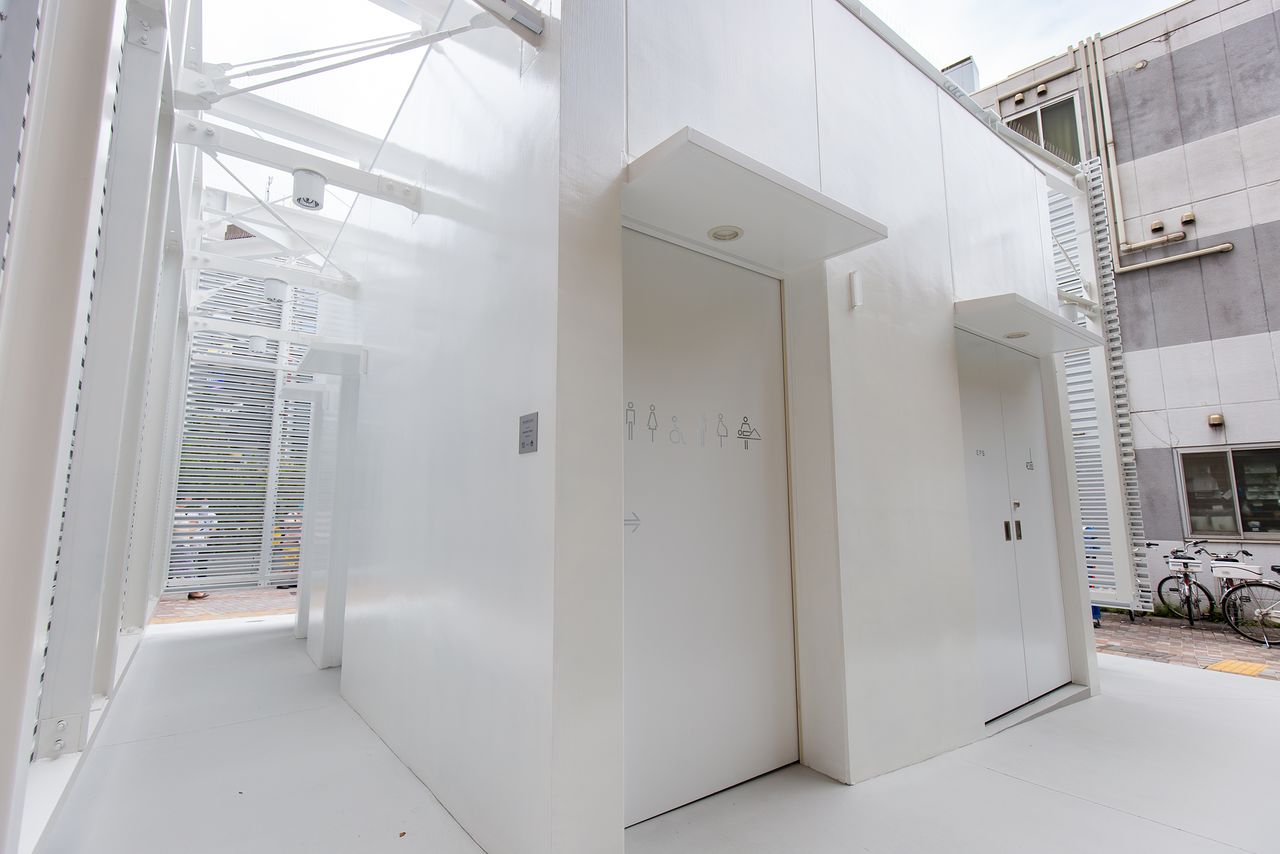 The entrance to the toilet is around the back, giving a degree of privacy in this busy station-front location. The louvers allow light to enter the access corridor. 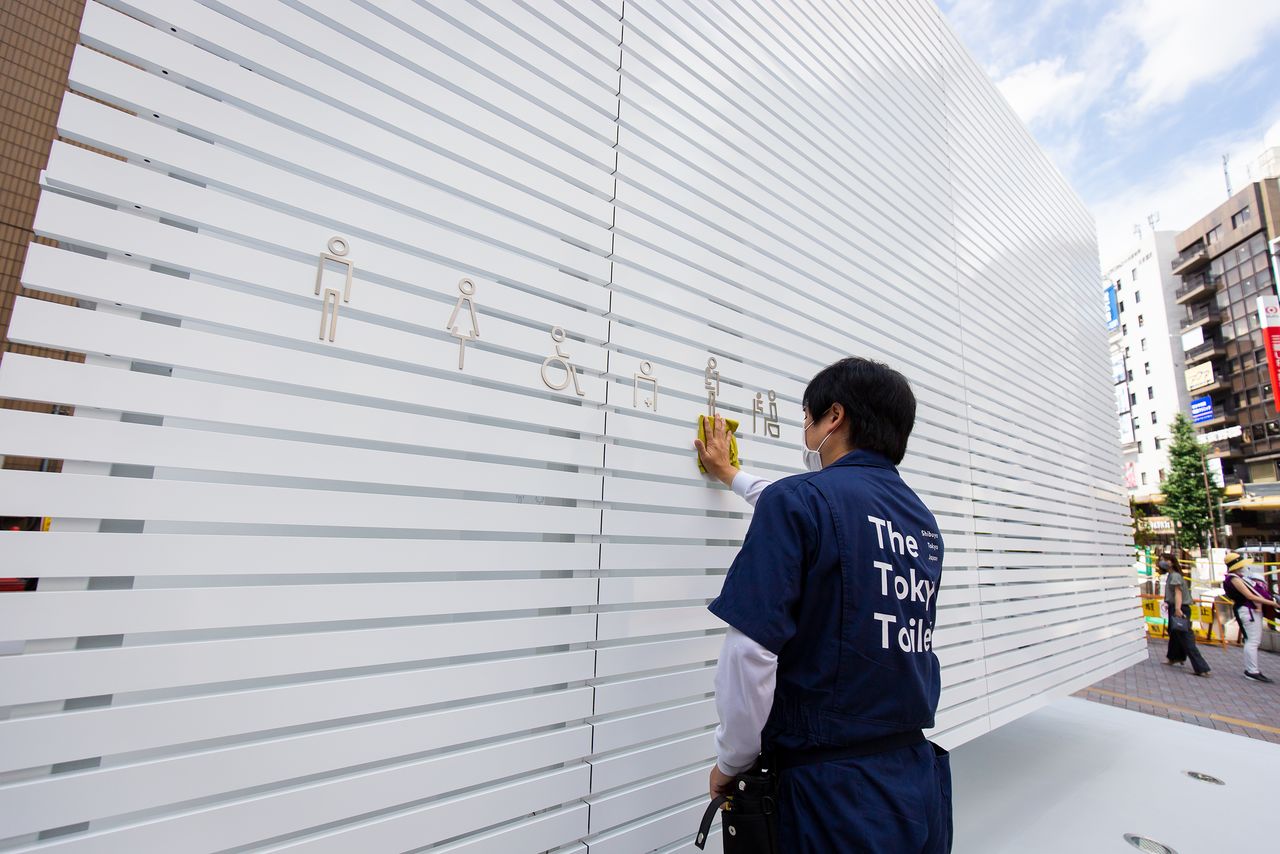 The streamlined pictograms designed by Satō are highly visible and are used on all Tokyo Toilet Project structures. Cleaning staff wear overalls designed by Nigo.

Award-winning designer and chief creative officer at TBWA Hakuhōdō, Satō Kazoo’s contribution to the project is a contactless toilet. His design meets the needs of public toilet users, many of whom dislike touching doorknobs or who activate the flush lever with their foot. The toilet’s white dome-like shape, as seen from the street, has received favorable reviews. 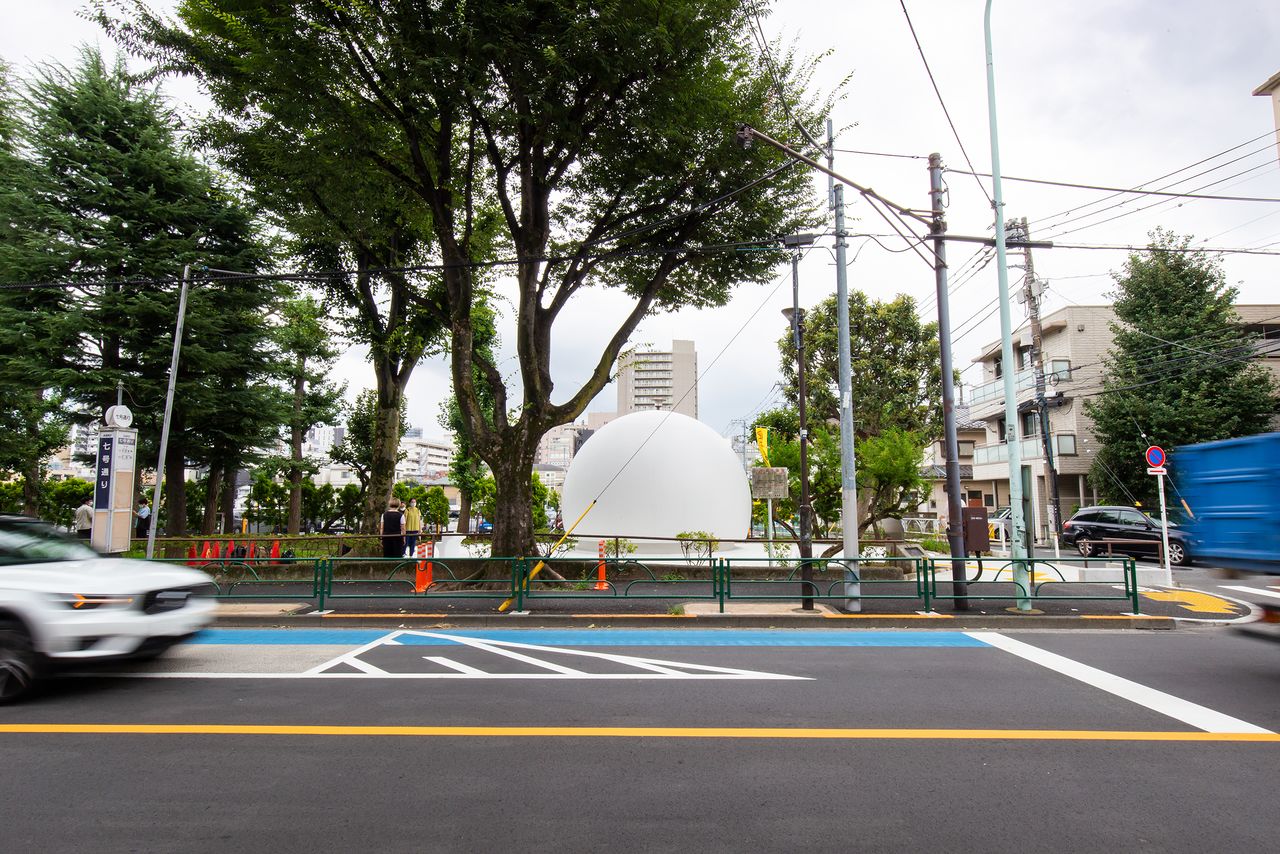 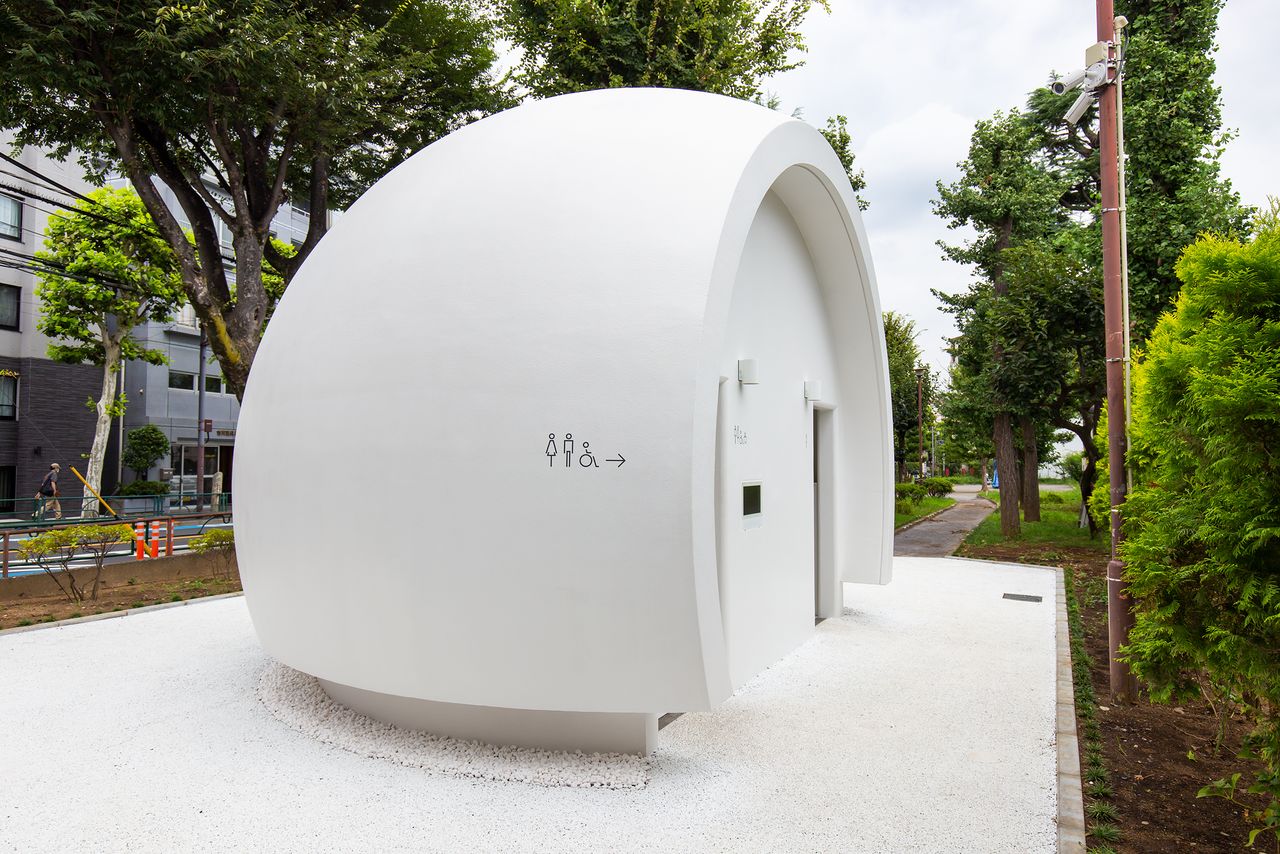 From the toilet entrance side, the structure looks like a mushroom cut in half. 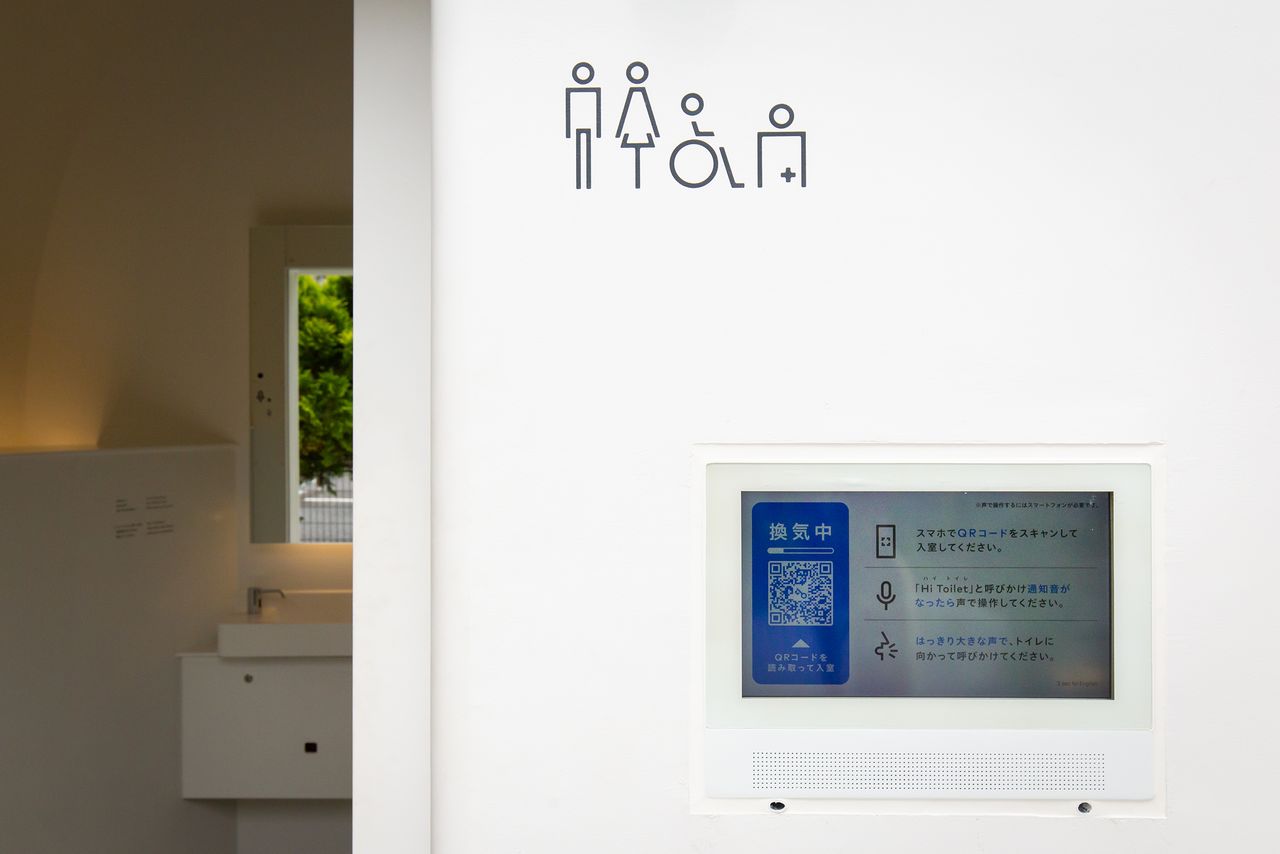 Using a smartphone to read the QR code at the entrance activates the voice command function. Users can operate the door and the toilet controls without any physical contact.

Ushiro is the creative director in charge of Uniqlo’s sustainability division. His design, which brings to mind a stone monument, looks as though it has been part of the park forever. The toilet’s rear panel lights up in 7.9 billion ways.

The facility, opened in July 2022, blends in with the scenery. 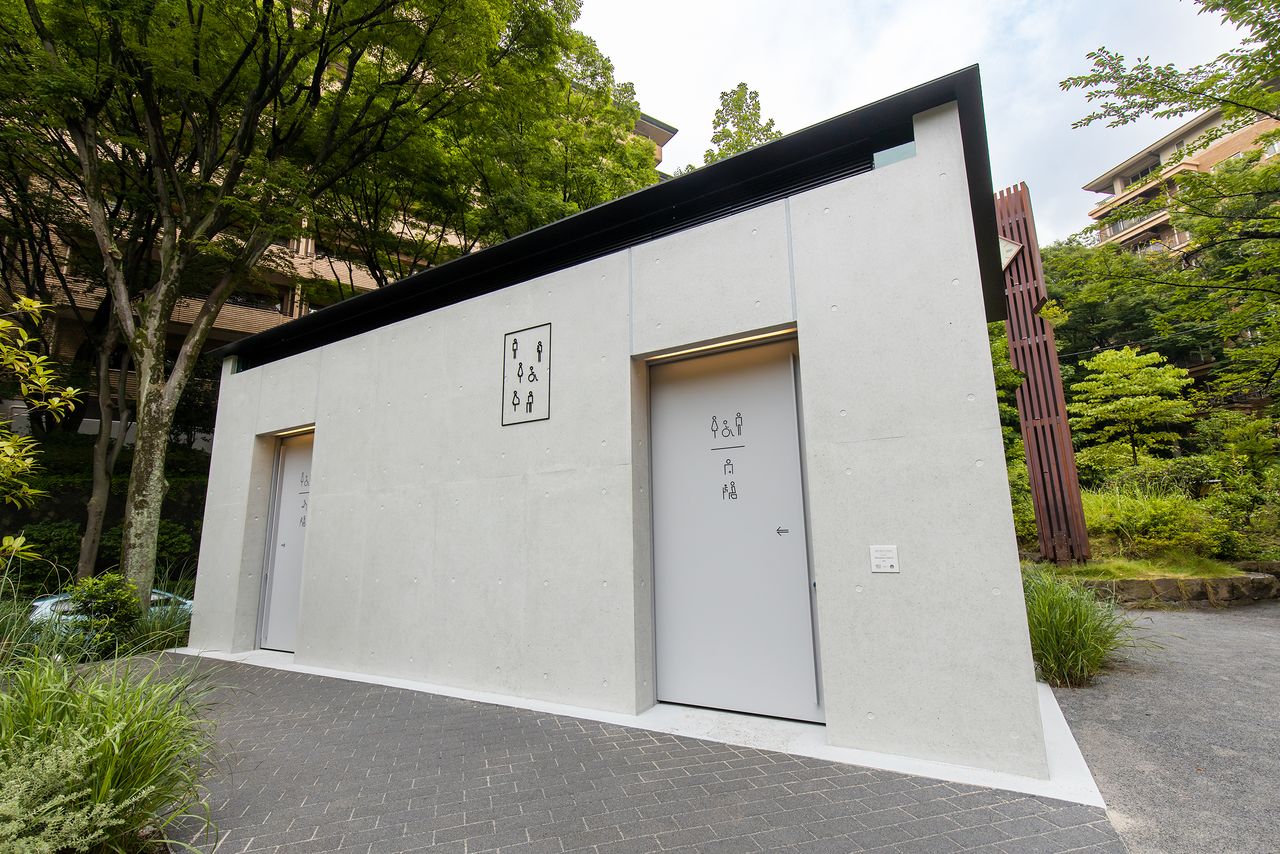 The concept behind this building is simplicity and ease of use. Amenities include an ostomate toilet, a wall-mounted baby seat, and a diaper-changing station. 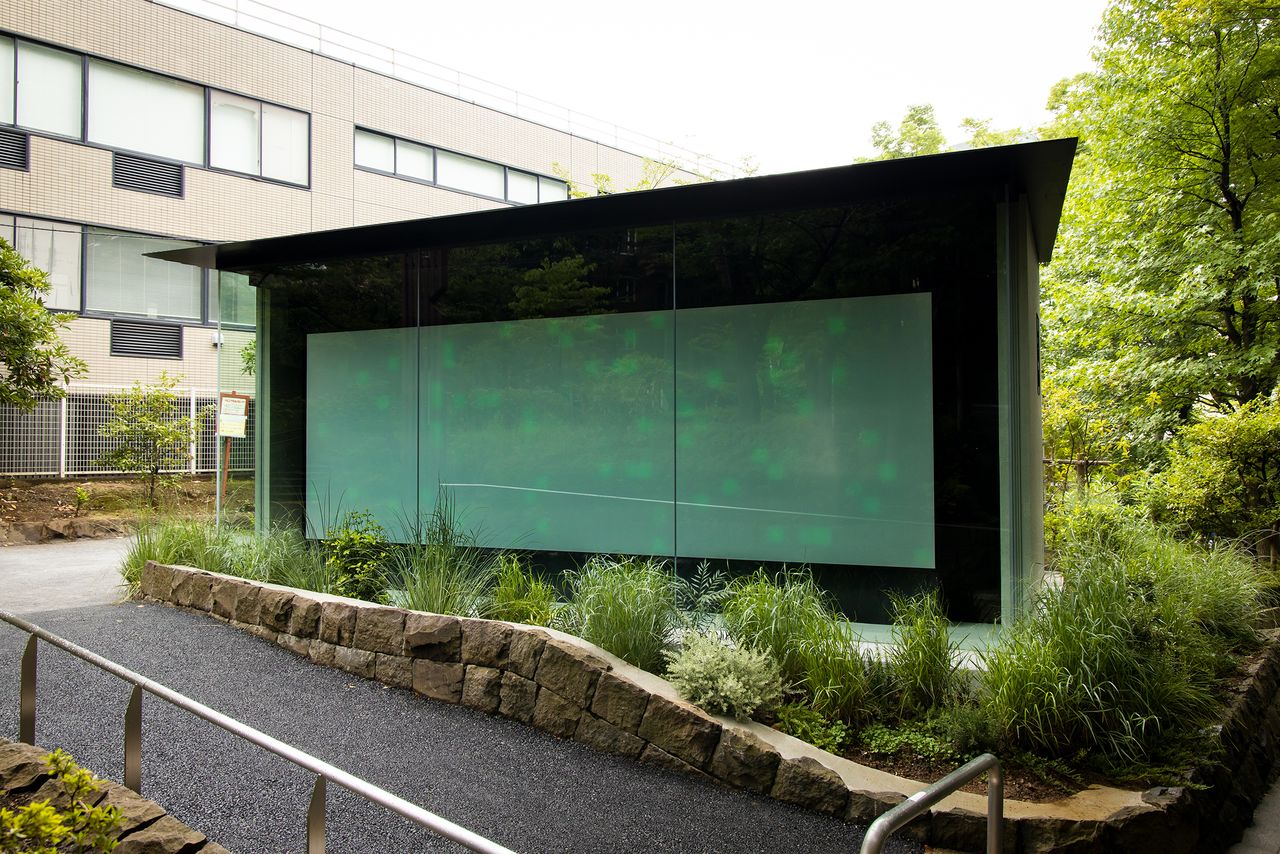 In the dark, the rear panel presents a magical spectacle, with a constantly changing lighting pattern that never repeats.