Society Culture Sep 11, 2013
Izumo’s religious importance dates back to the very dawn of Japanese history. The Izumo Taisha shrine is said to be where the myriad gods of the Shinto pantheon gather from all corners of Japan for a month-long meeting once a year. What made them choose this place? Nakano Haruo’s evocative images of this special place suggest an answer.

“Shinkoku is the sacred name of Japan. Shinkoku, the Country of the Gods; and of all Shinkoku, the most holy ground is the land of Izumo.” These lines are from Glimpses of Unfamiliar Japan by Lafcadio Hearn, the peripatetic nineteenth-century author whose many books and articles contain precious records of a traditional Japan on the cusp of industrialization and modernization.

Hearn arrived in Japan in 1890 and settled in Matsue, a castle town not far from Izumo Taisha. He wrote lovingly of what he called “the Province of the Gods” and was among the first non-Japanese to gain entry to the precincts of one of Shinto’s holiest shrines. He remained in Japan until his death in 1904 and eventually became a naturalized Japanese citizen. He remains a beloved figure in his adopted homeland, best known by his Japanese name, Koizumi Yakumo.

Over the years, I too have visited Izumo Shrine more times than I can remember. On each visit, whatever the season or time of day, I am struck by the special atmosphere that envelops the shrine. The scenery is different every time, but the presence of the kami—the Japanese Shinto gods—is always palpable. To be at one with the kami is to be at one with nature. To visit Izumo is to be reminded of the continuing importance of this key strand of traditional Japanese spirituality.

Izumo Taisha is where kami from all over Japan gather during the month of Kami-ari-zuki (the “month when the kami are here”), which corresponds to the tenth month in the traditional calendar. (In the rest of Japan, the month is called Kannazuki, the “month when the kami are absent.”) In 2013, the main shrine buildings were rebuilt in a ceremony that takes place every 60 years. Like the constantly changing seasons, the shrine buildings too become timeless through a repeated process of renewal.

Here are a few of the many images I have taken over my repeated visits to the shrine. I hope you will enjoy looking at them, and that they will give you a taste of the timeless sense of the divine that lingers in this special place. 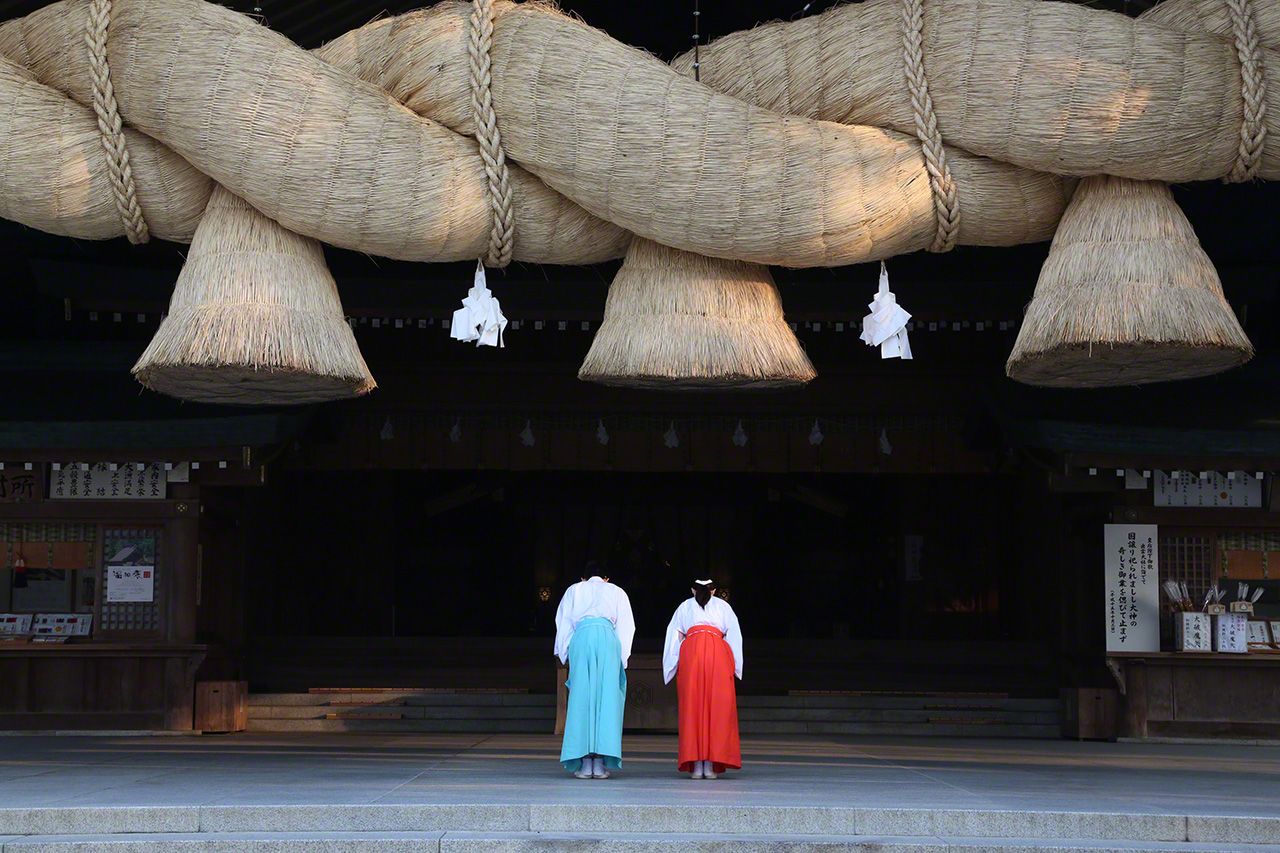 This huge shimenawa rope is the most famous symbol of the Izumo Shrine. 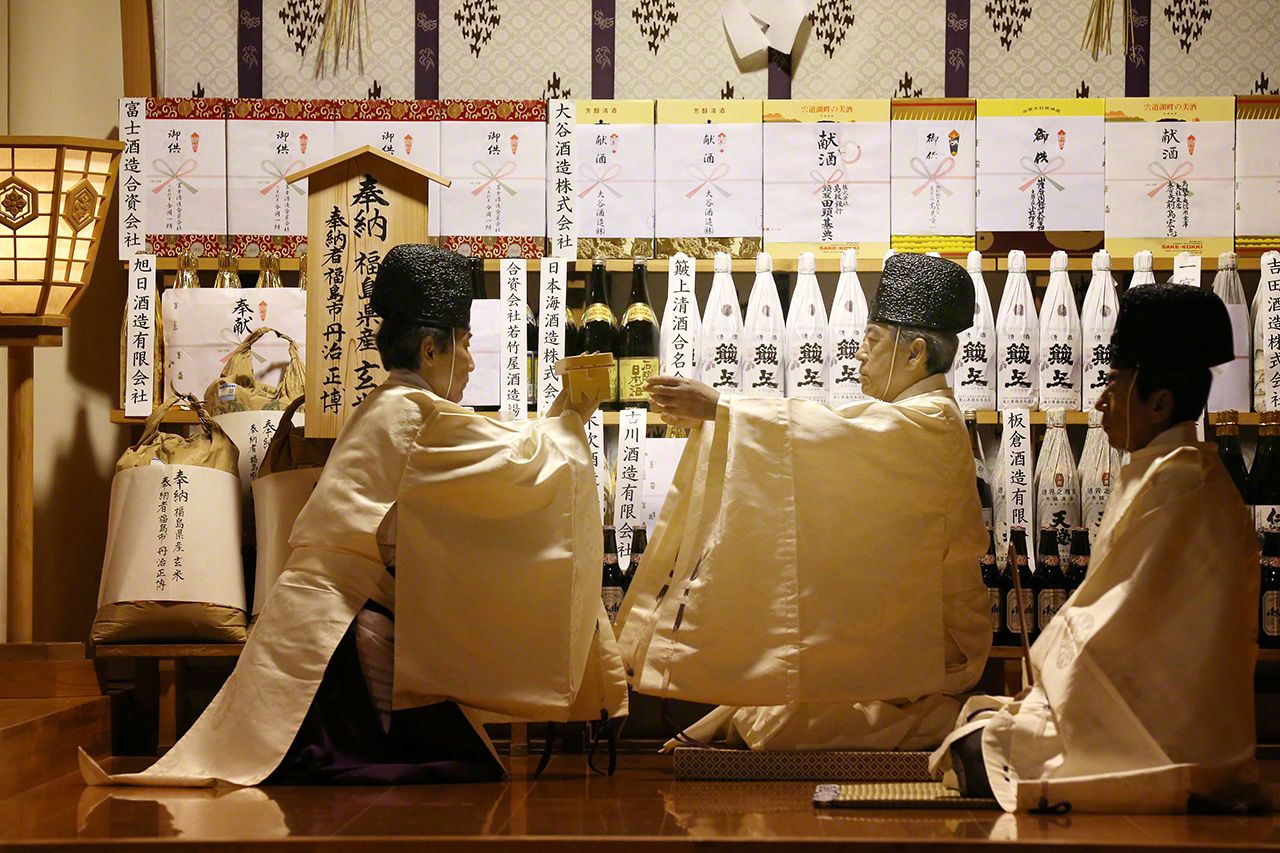 The Ōharae (great purification) ceremony takes place on New Year’s Eve as a way of exorcising the sins and impurities of the previous year. 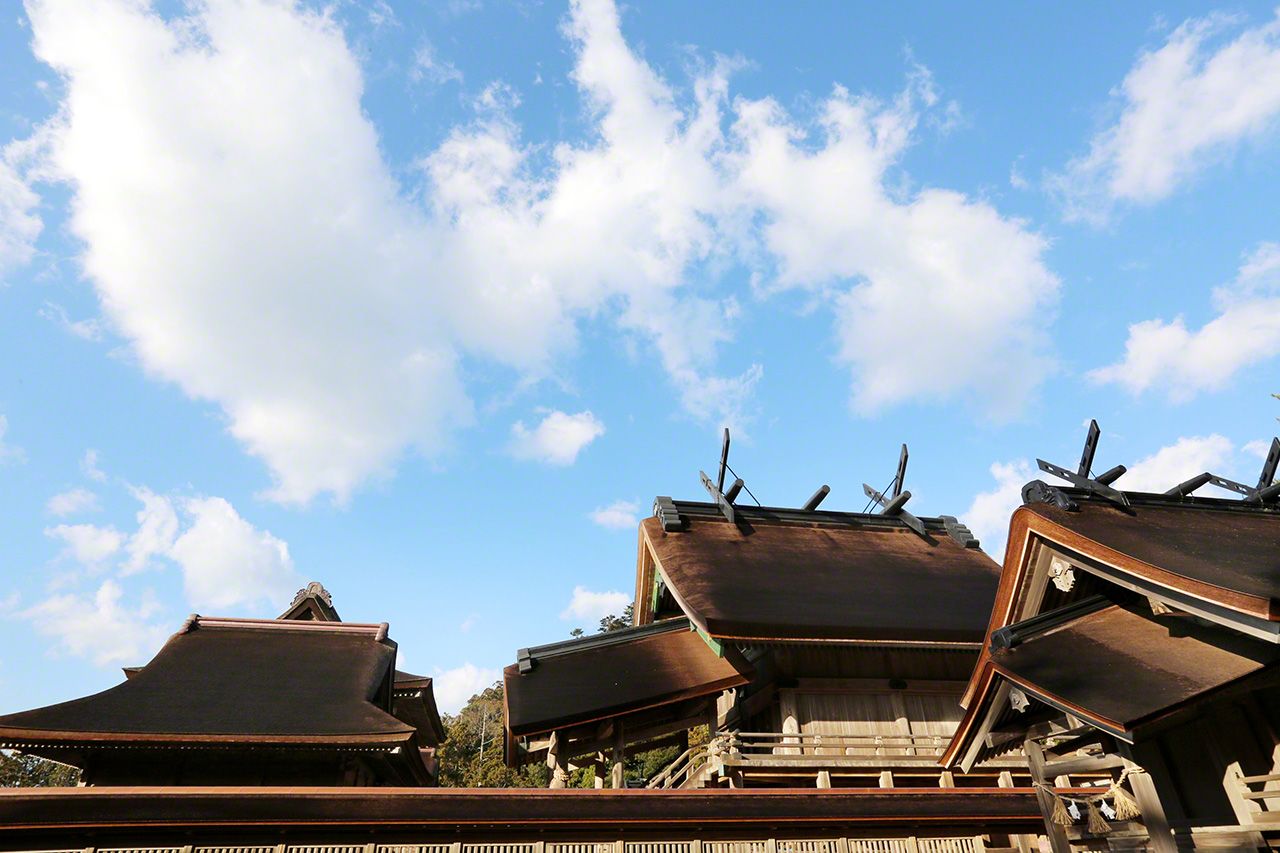 The new shrine buildings. The structures are completely rebuilt every 60 years. 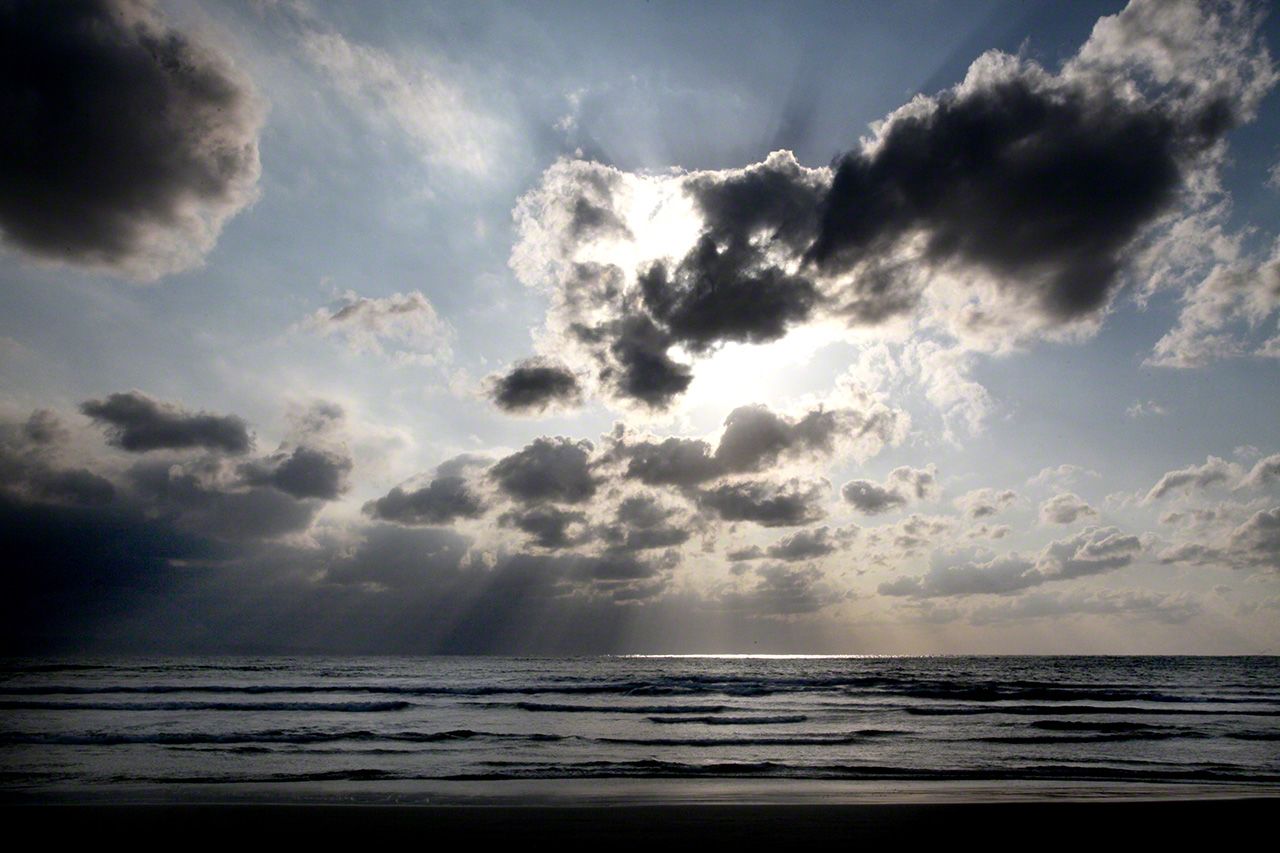 A view from the beach at Inasa no hama, an important site in Japanese myth. 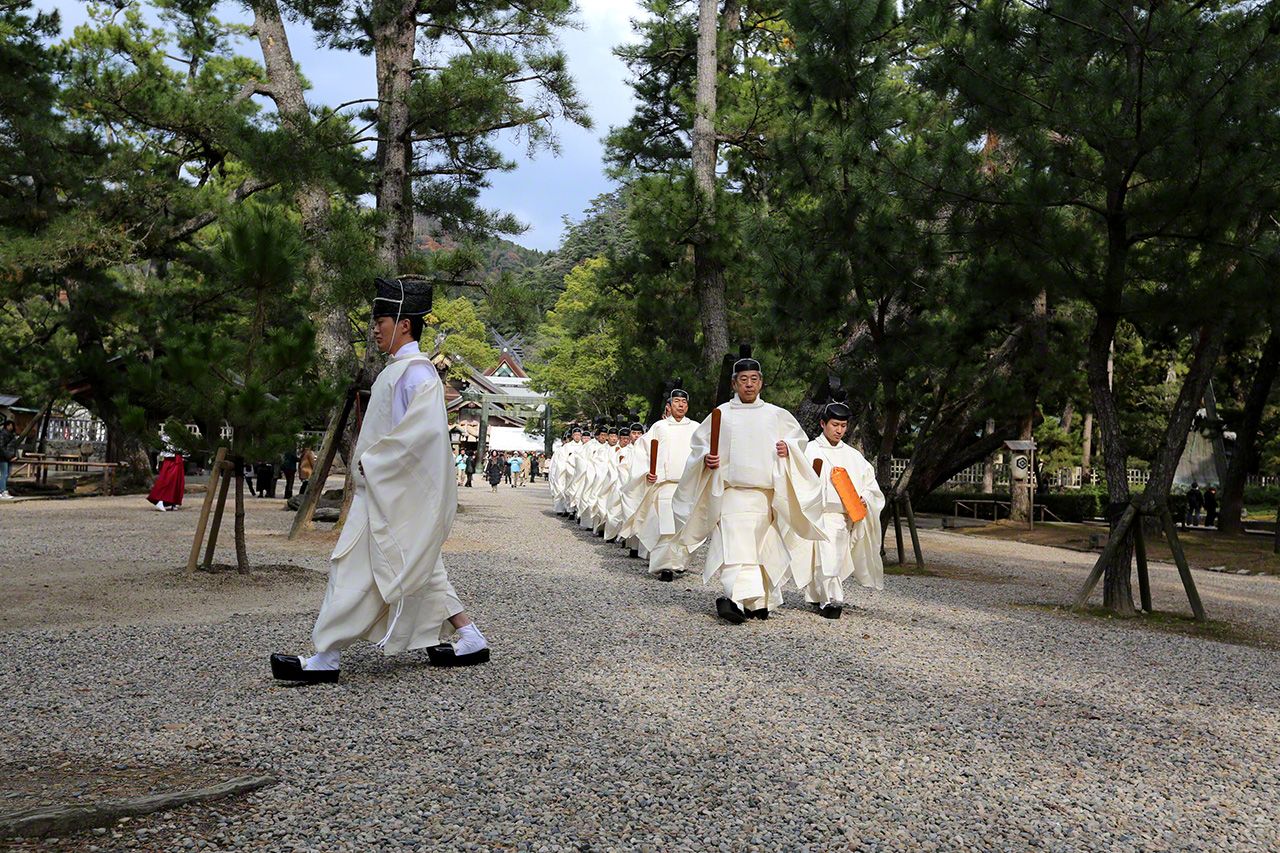 A procession of priests makes its way along the pine-lined pathway. The prayer hall is in the background. 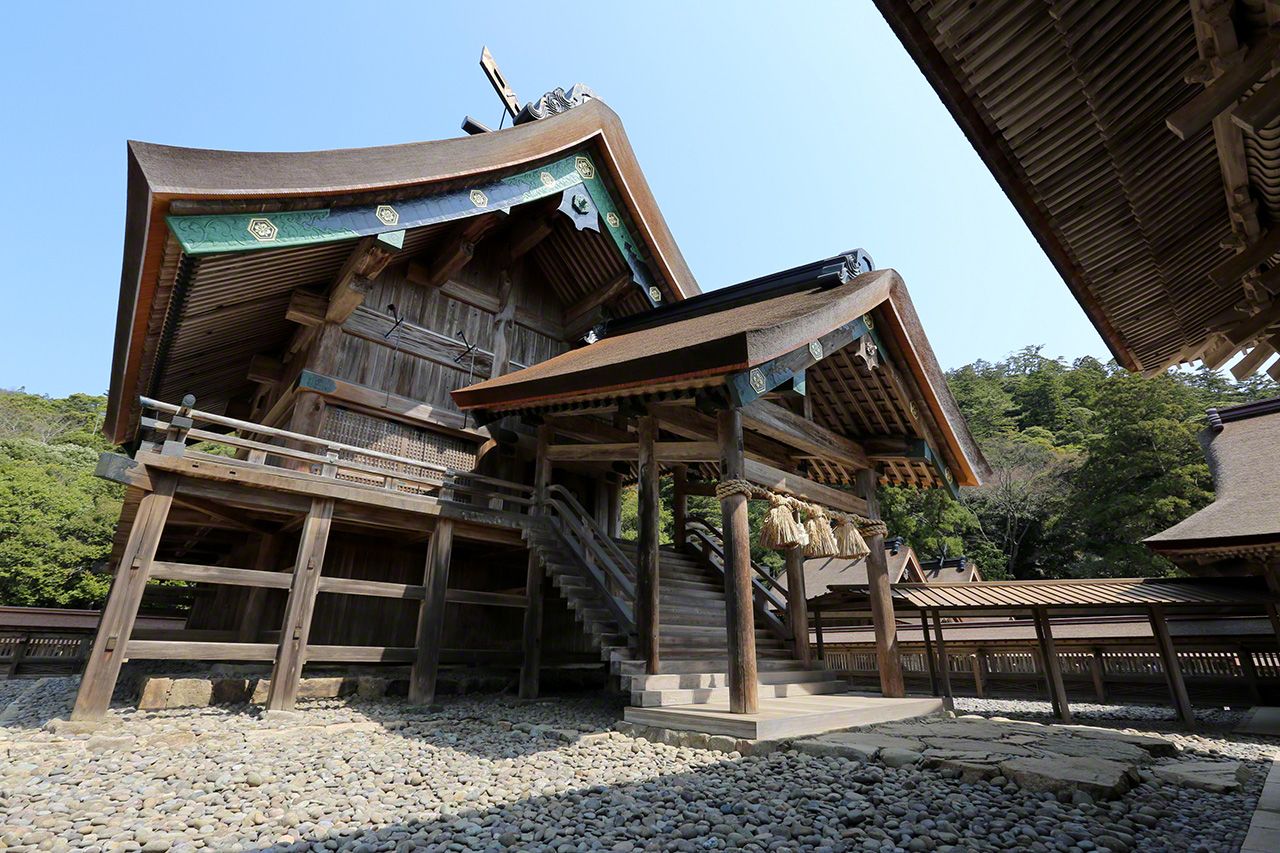 The main shrine building is built in the oldest style of religious architecture in Japan, known as “taisha-zukuri.” 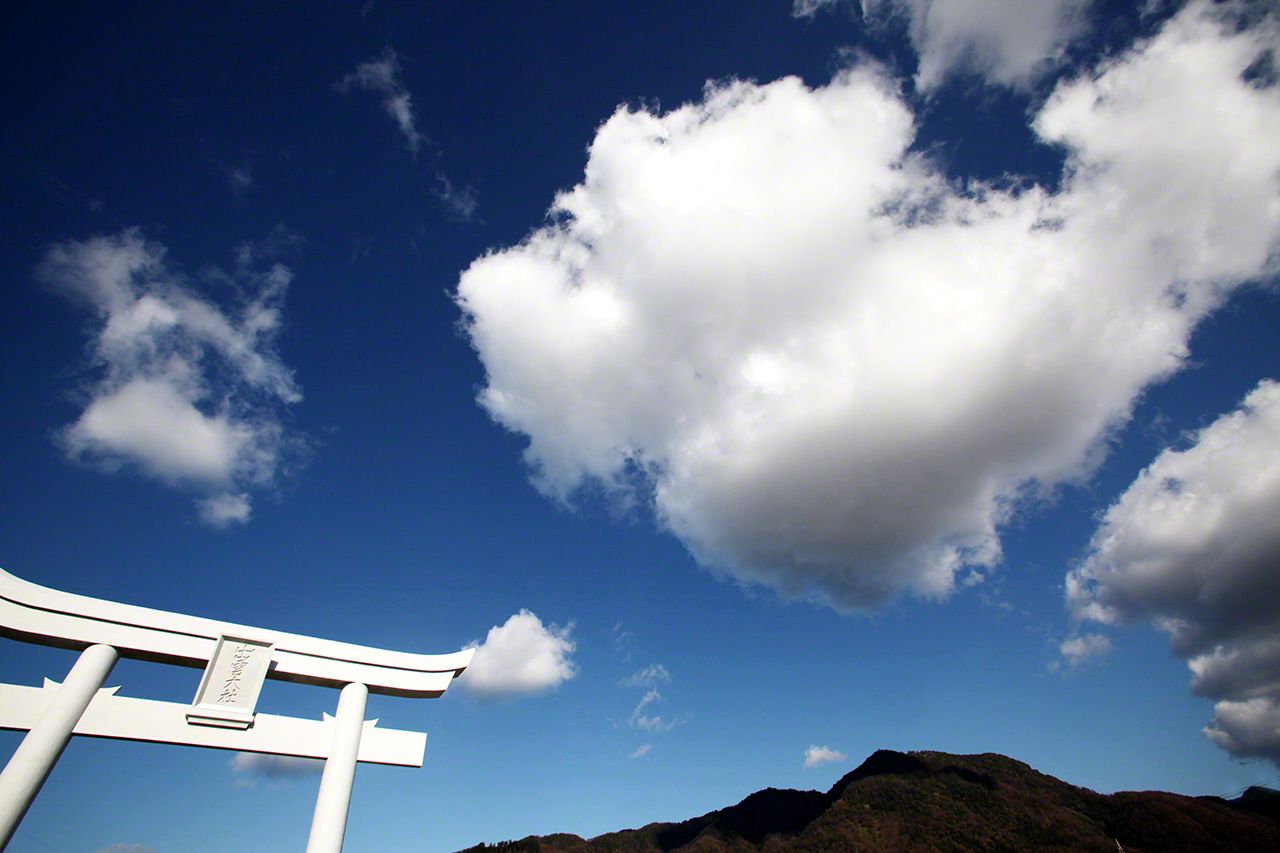 The Ichino torii gate, with Mt. Misen rising up behind the shrine. 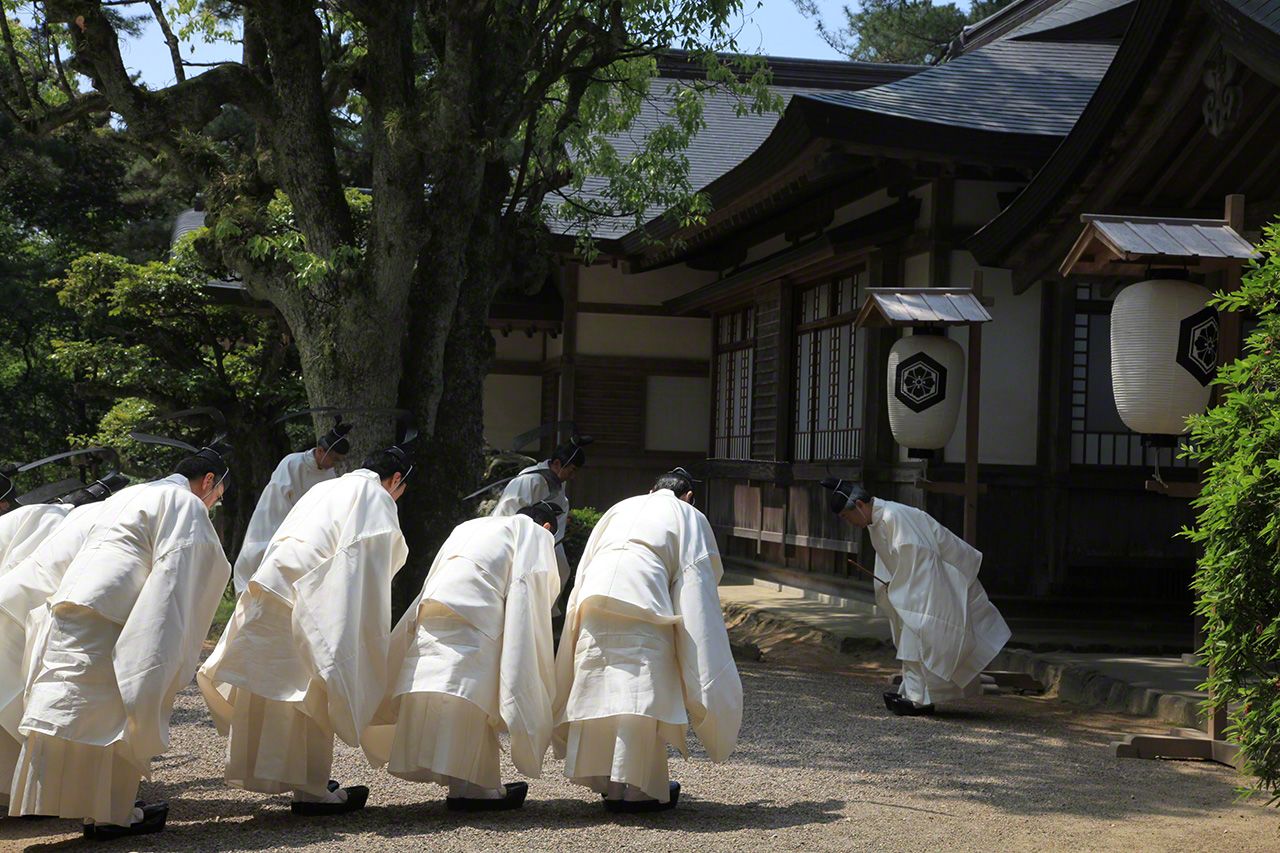 Priests bow in greeting before a shrine ceremony. 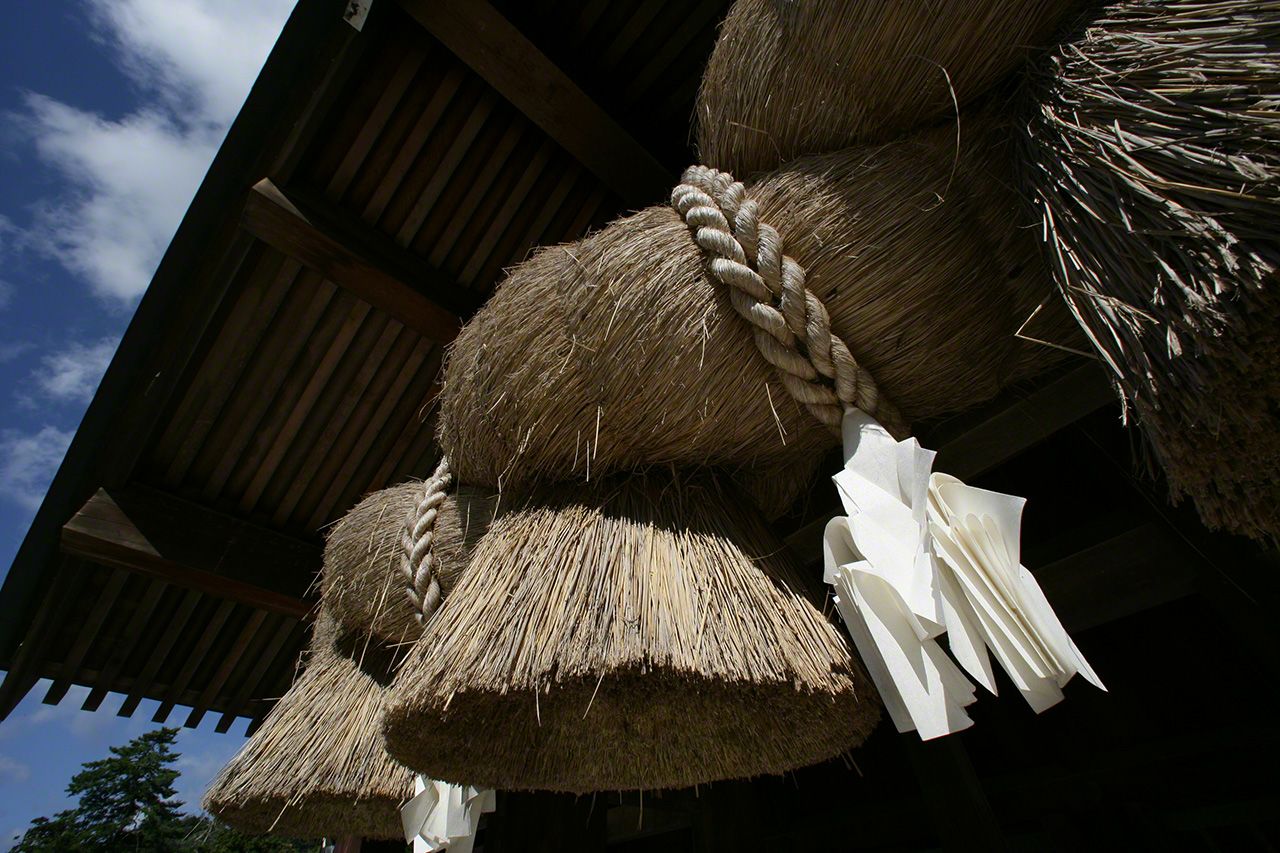 The shimenawa rope represents the dividing line between the mundane world and the realm of the kami. 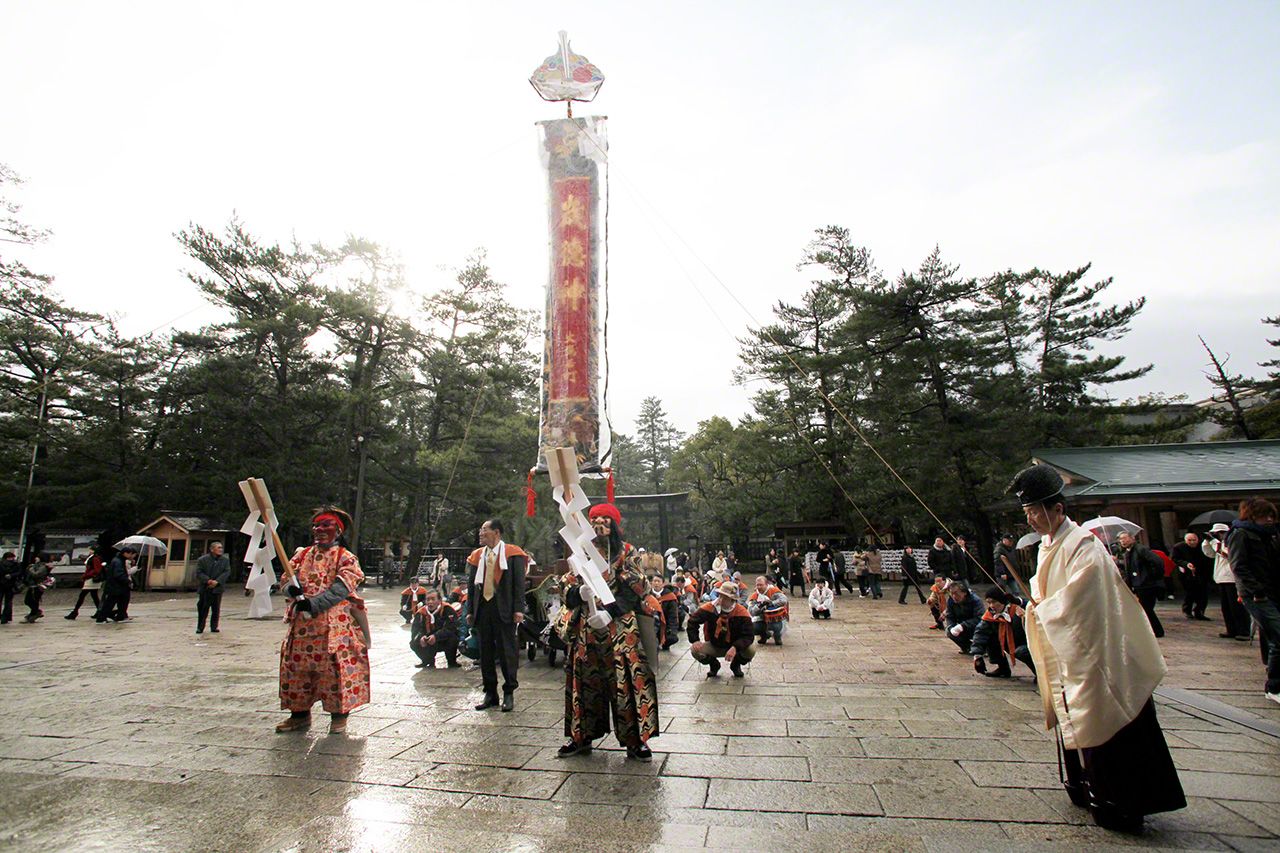 A traditional ceremony performed each January 3 to pray for good fortune in the coming year. 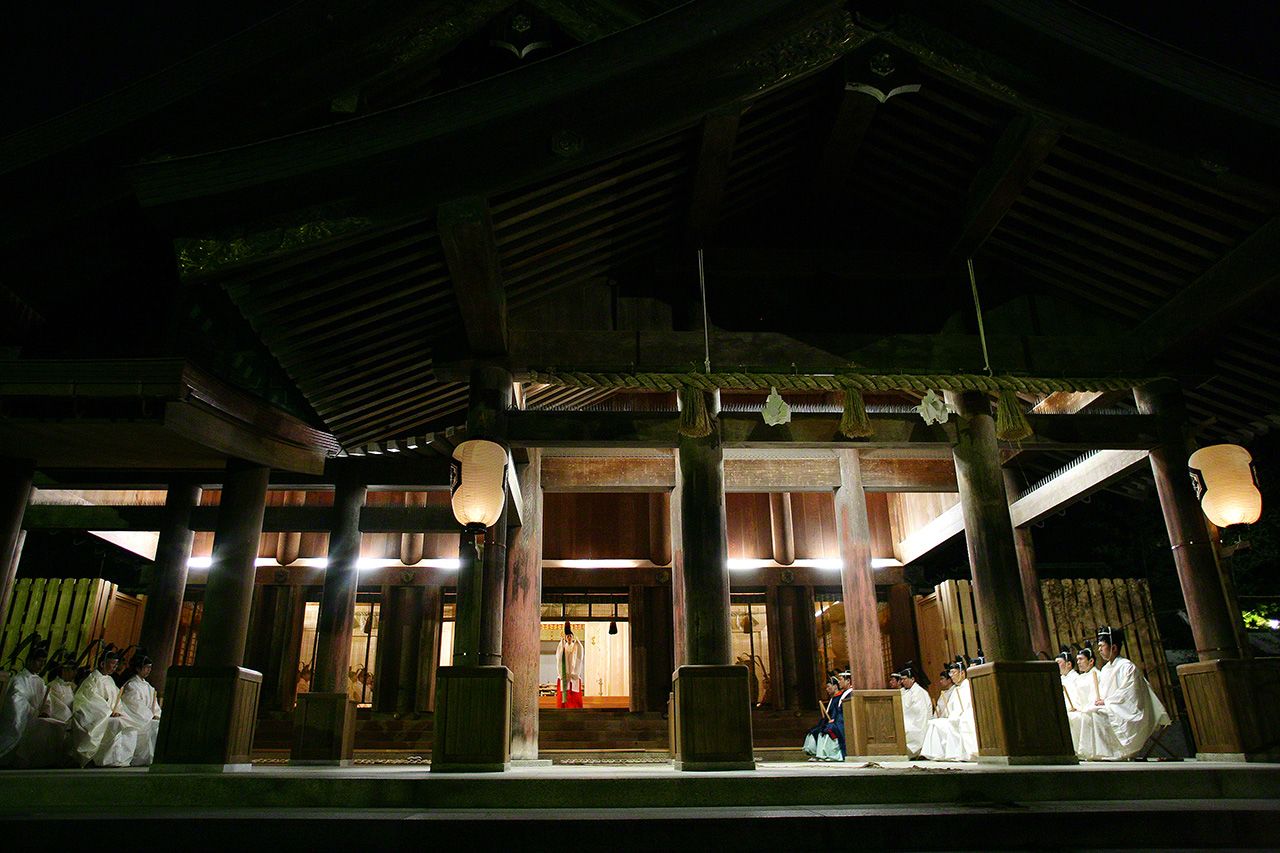 This is where miko shrine maidens perform dances of thanksgiving and prayer to the gods. 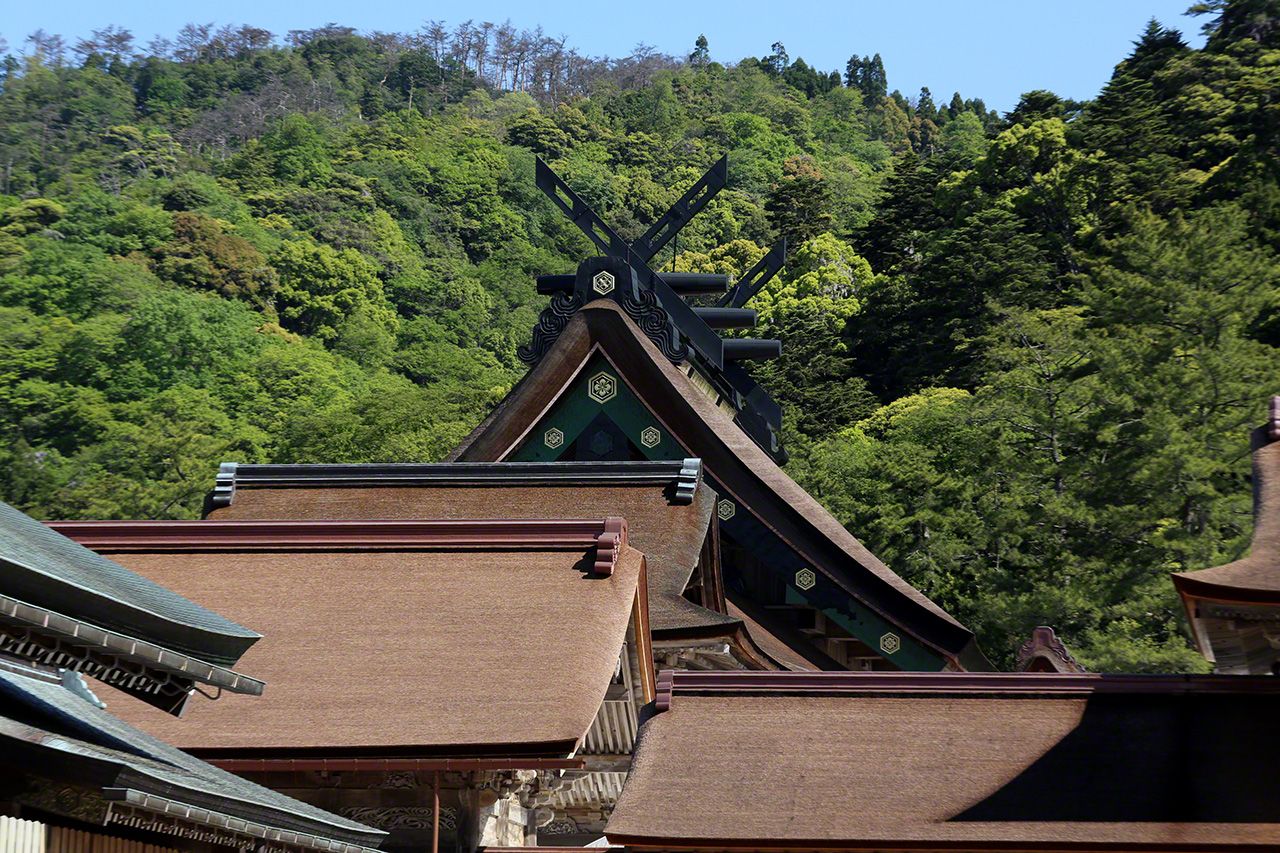 The resplendent roofs of the new buildings, surrounded by spring foliage. 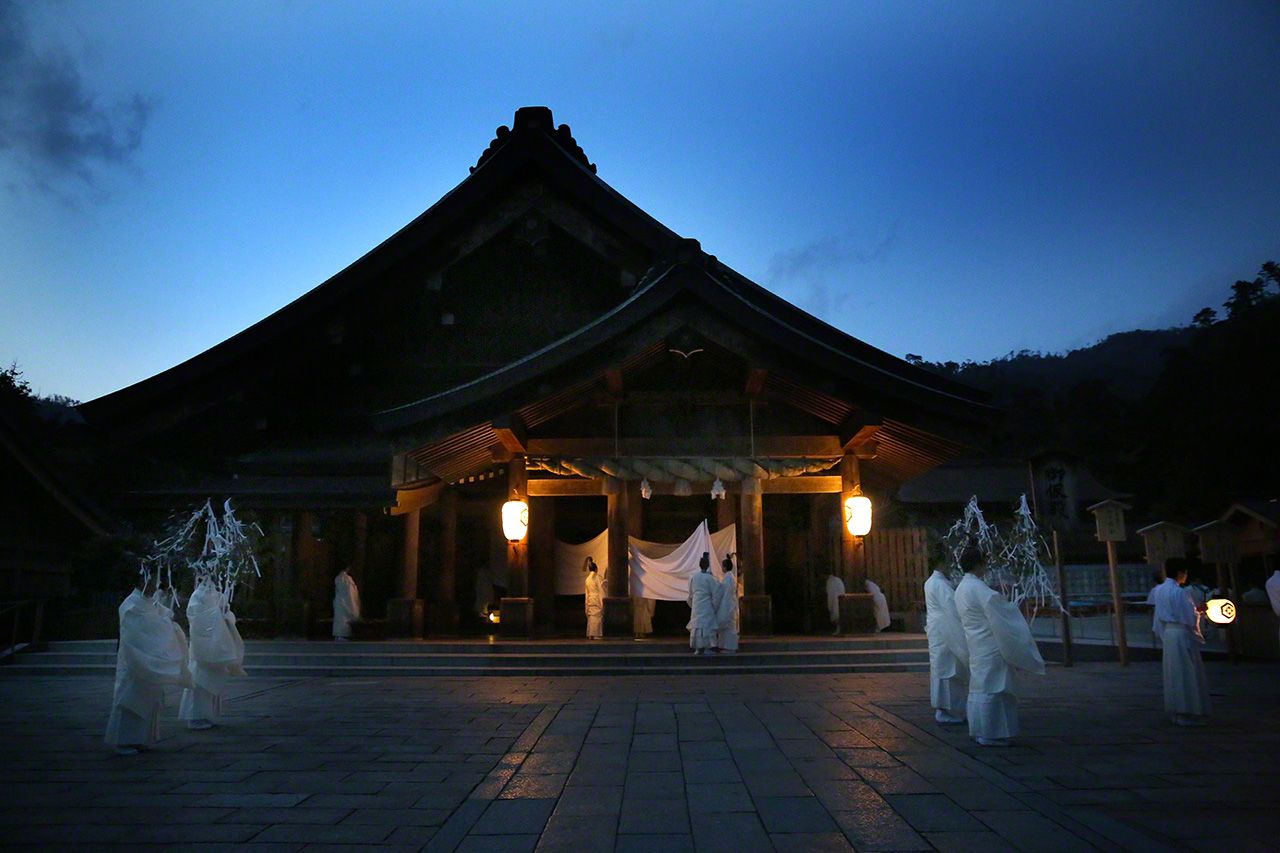 The shrine deity is returned to the shrine after rebuilding, accompanied by the solemn sounds of flutes and drums. 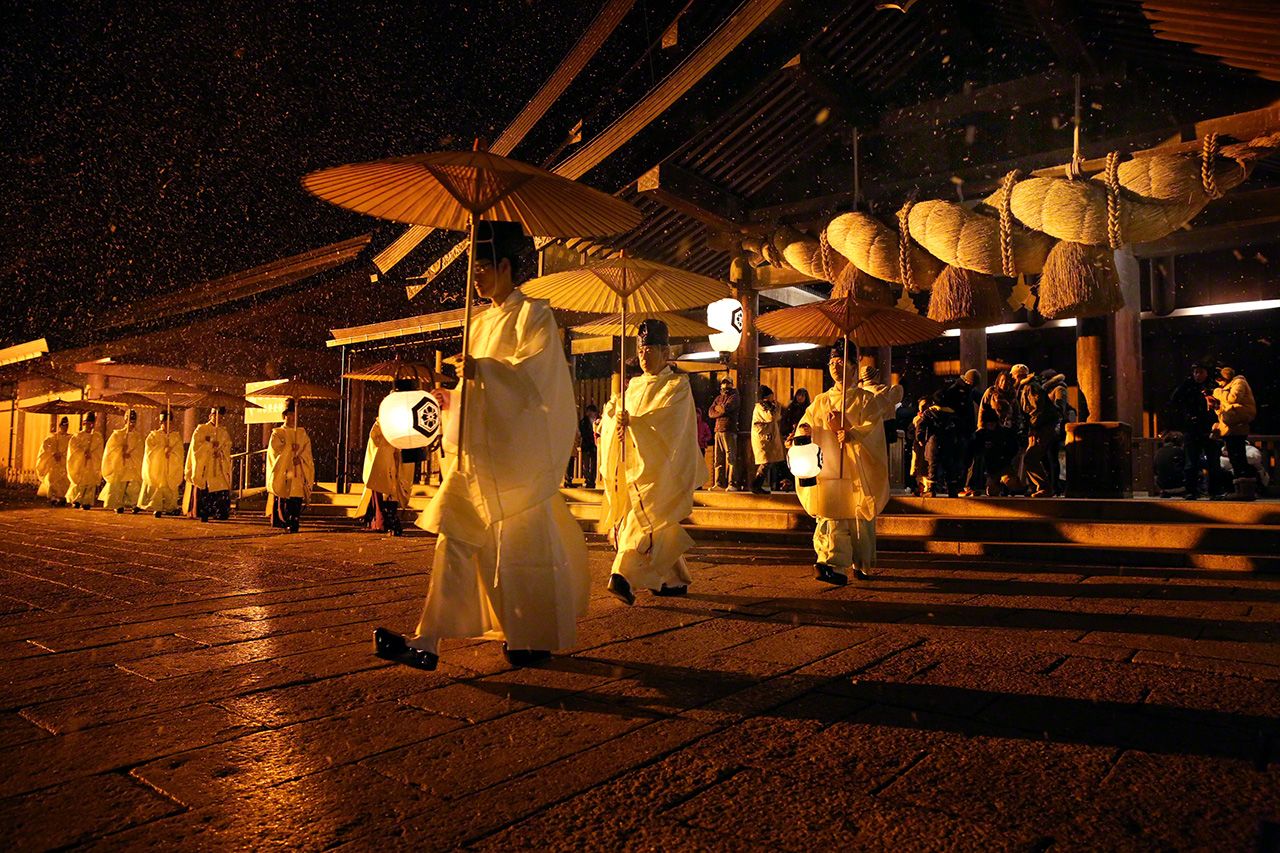 Priests in procession to the prayer hall, paper parasols and lanterns in hand. 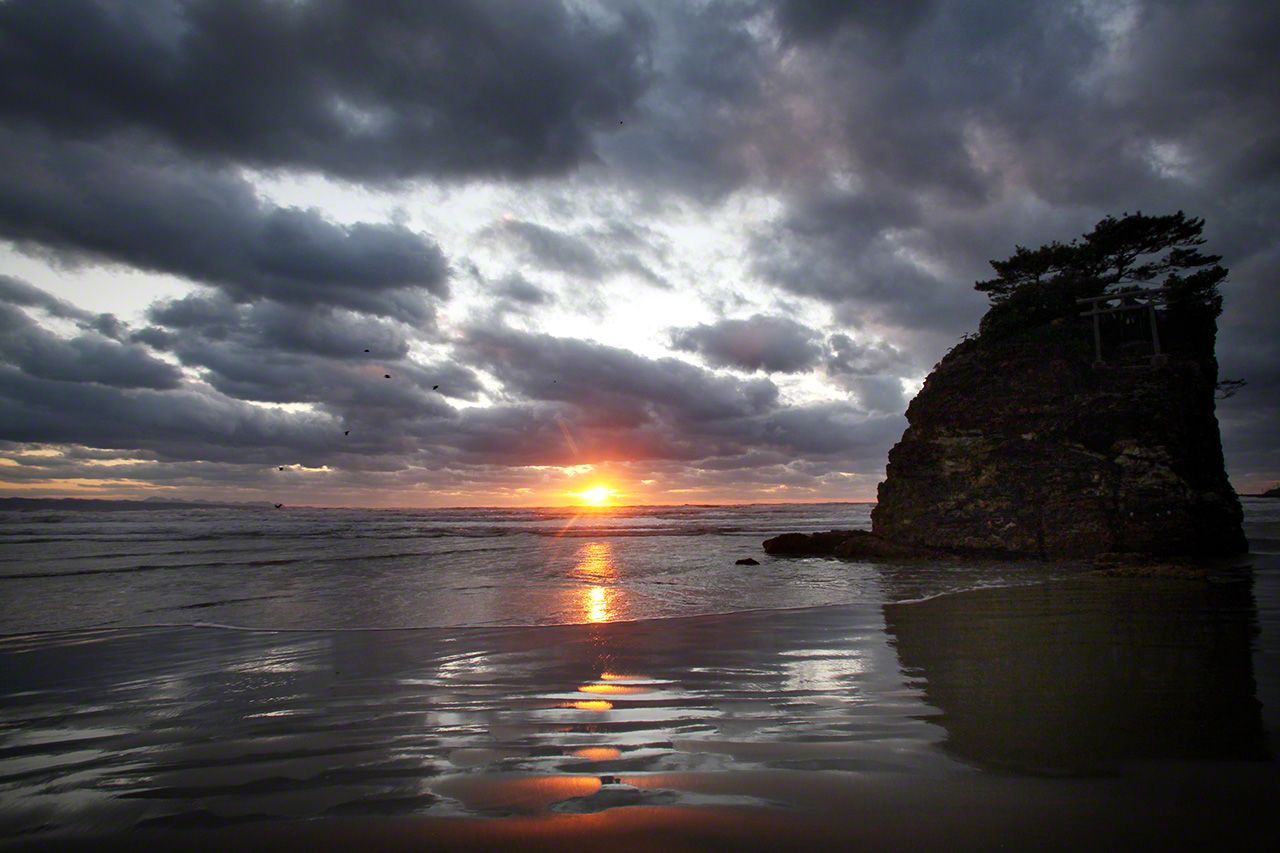