One Man and His Cats in Fukushima (Photos)

Society Culture Lifestyle Jun 15, 2016
Matsumura Naoto has been looking after all kinds of abandoned animals in Fukushima since residents evacuated following the disaster of March 11, 2011. In 2013, he adopted two kittens that have become his constant companions. Photographer Ota Yasusuke captures their everyday antics in a series of lively images.

I first met Matsumura Naoto in June 2011, three months after the accident at Fukushima Daiichi Nuclear Power Station. He was looking after and feeding animals left behind in the depopulated exclusion zone within 20 kilometers of the stricken plant. We met in Tomioka in the Futaba district, 12 kilometers from the accident site.

Matsumura was the only person feeding the dogs and cats abandoned when the residents evacuated from the town. He had also taken charge of the cattle, which had lost all commercial value and at that time were just waiting to be put down. Without him, the animals of Tomioka would have faced an uncertain existence at best.

Two New Members of the Household

In the summer of 2013, four kittens were dumped outside an animal shelter run by Fukushima Prefecture. The shelter was expressly set up to look after dogs and cats from within a 20-kilometer radius of the nuclear plant, and was unable to take in unwanted kittens from who knows where. They might well have been sent to be euthanized, victims of the arrogance of someone who could not imagine their lives after the act of abandonment. A shelter volunteer took pity, however, reaching out to Matsumura and altering their fate.

“Poor creatures!” Matsumura took the kittens to his home in the same spirit that he looked after so many animals that had been left behind. He found a new owner for the two male kittens, but the female kittens became part of his household. He named them Shiro and Sabi after their colors. In Japanese, shiro means white and sabi—literally “rust”—is used to describe black and red tortoiseshell cats.

Now that five years have passed since the Great East Japan Earthquake, there is no longer a “restricted zone.” Even so, more than 90% of the area within 20 kilometers of the plant—including Tomioka—is still unfit for human habitation. Matsumura and other volunteers provide food to animals in the area’s ghost towns, helping them to ward off starvation.

The government is focusing its efforts only on decontamination of radiation-affected areas, seeking to return the polluted land to its former state without any thought for the animals that remained there. Most citizens have not returned to those communities where evacuation orders have been gradually lifted, and their streets are cold and empty of life.

Lingering in those sterile streets makes me wonder whether creating a space devoid of life can really be called “recovery.” It seems to me that true recovery should include those animals that have acted as people’s companions.

There is a kind of irony in how green the land has become since its citizens departed. As we humans rack our brains, working to decontaminate the earth we polluted, Shiro and Sabi enjoy their innocent play. Matsumura stubbornly continues to live with his animals in the place where he was born and brought up, seeming to suggest a way for people and animals to coexist in Fukushima in the future.

(Originally published in Japanese on June 15, 2016. Photographs and text by Ota Yasusuke.) 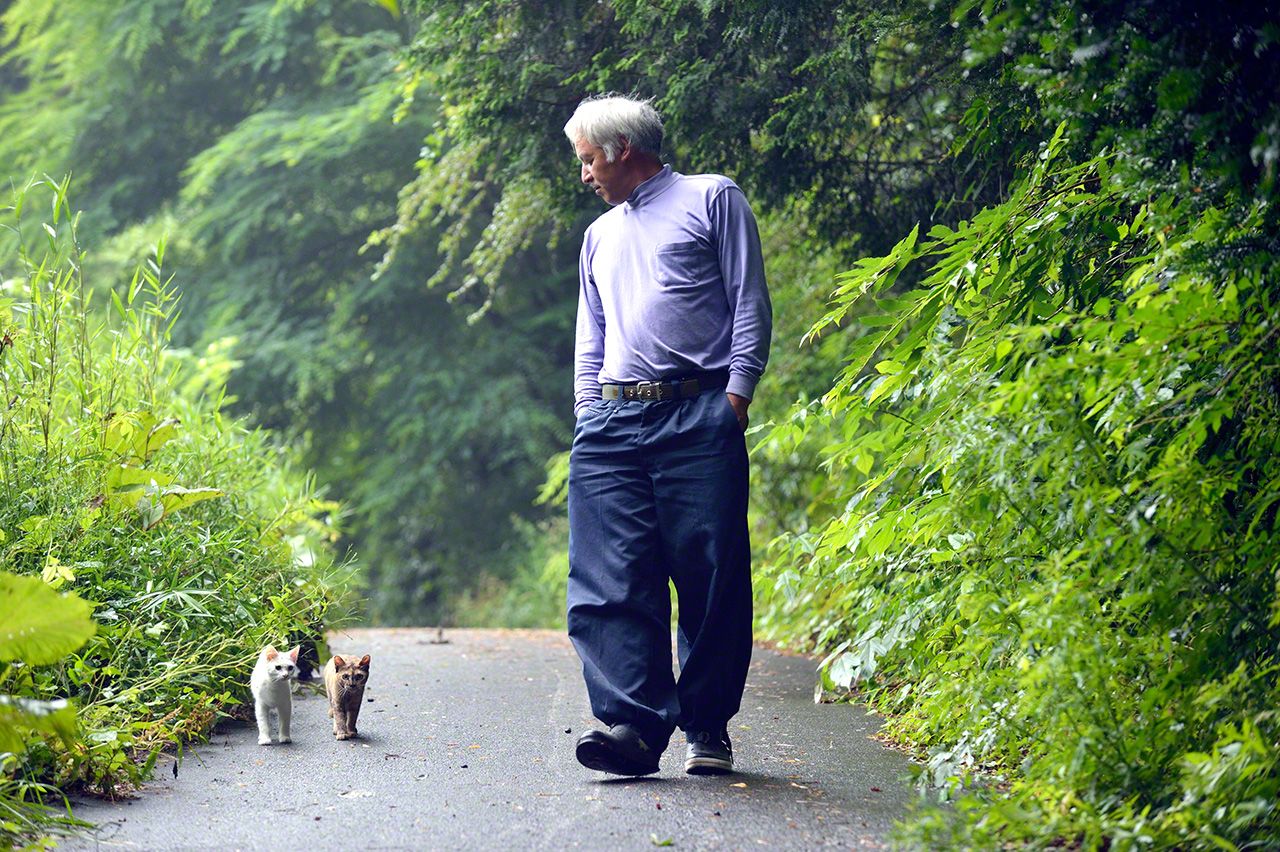 Matsumura takes a walk with Shiro and Sabi one afternoon after feeding the cattle. 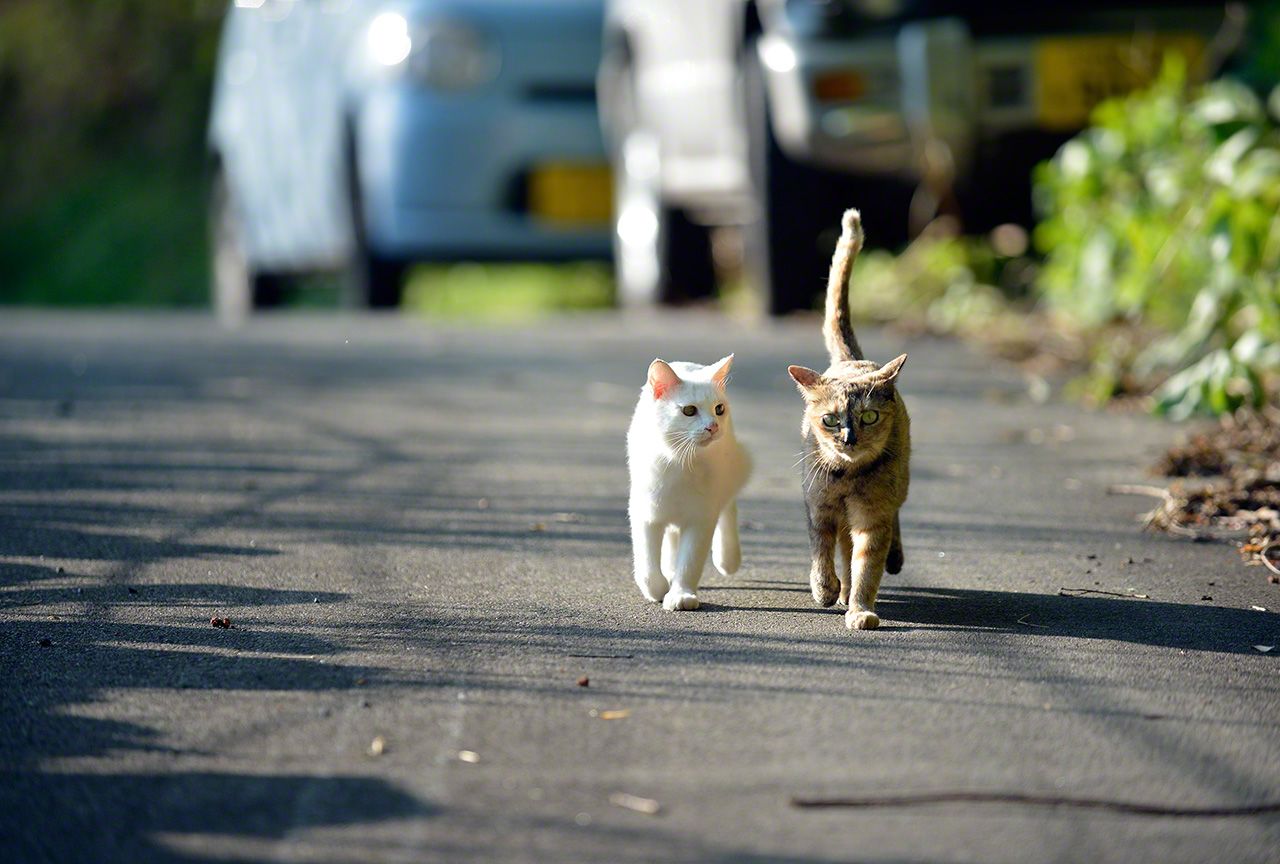 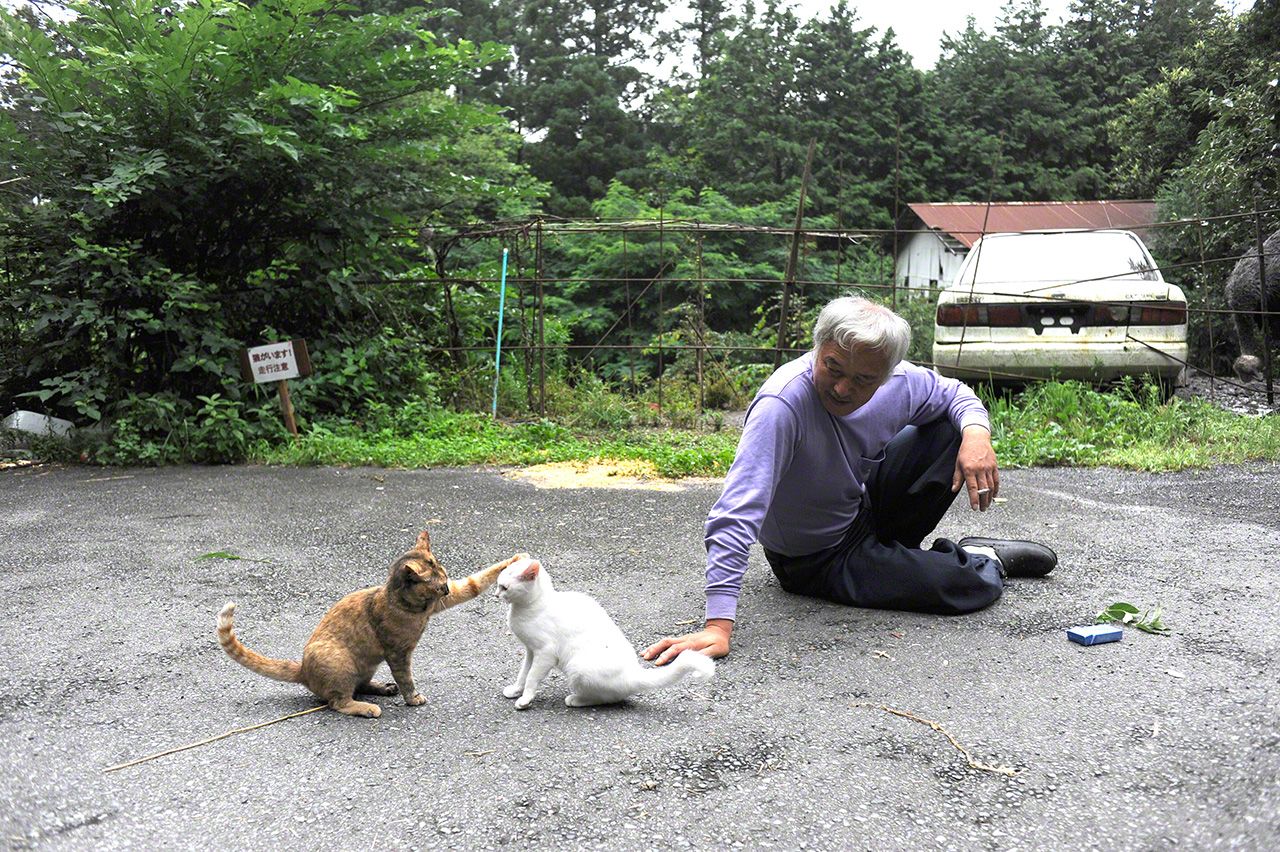 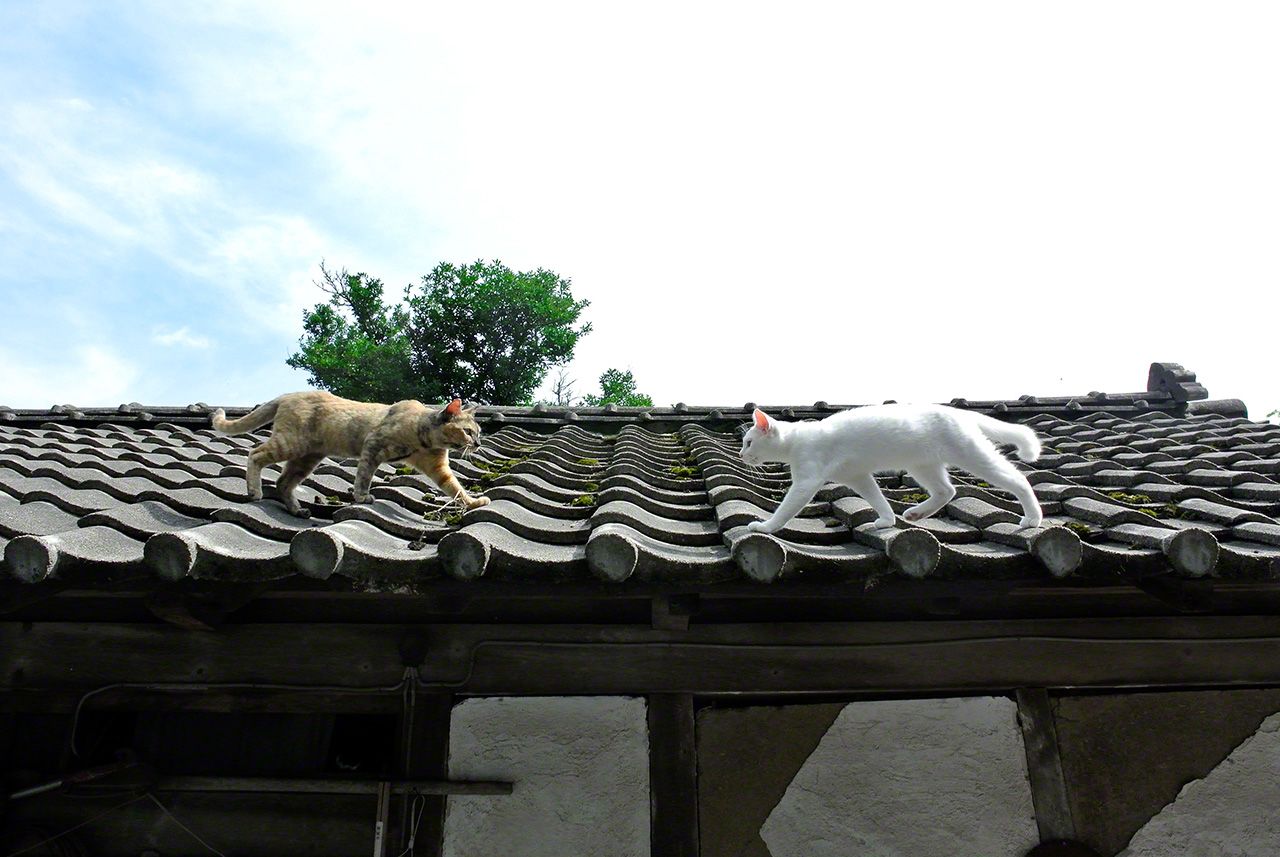 Although very different in character, Shiro and Sabi get on well and are often seen together. 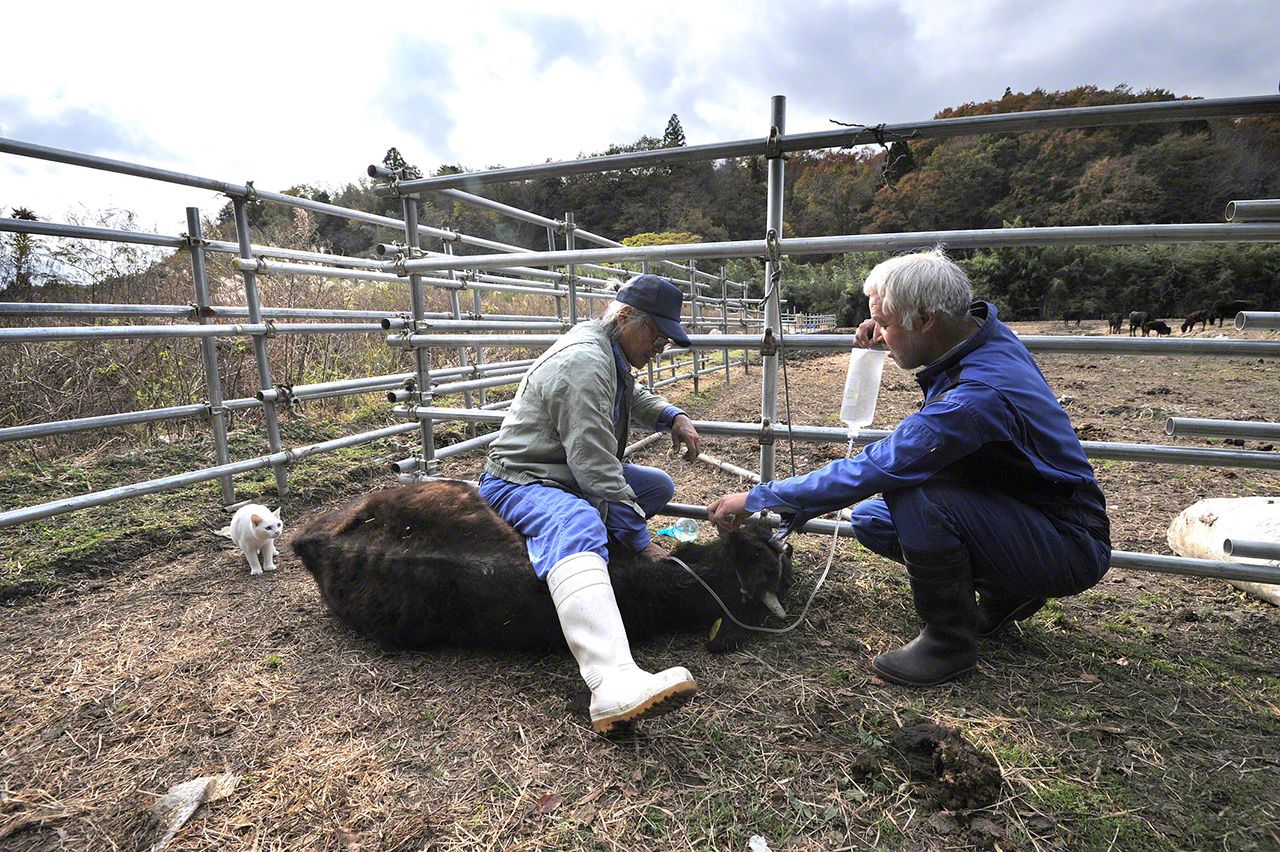 Shiro looks on nervously as a calf receives treatment from a volunteer vet. 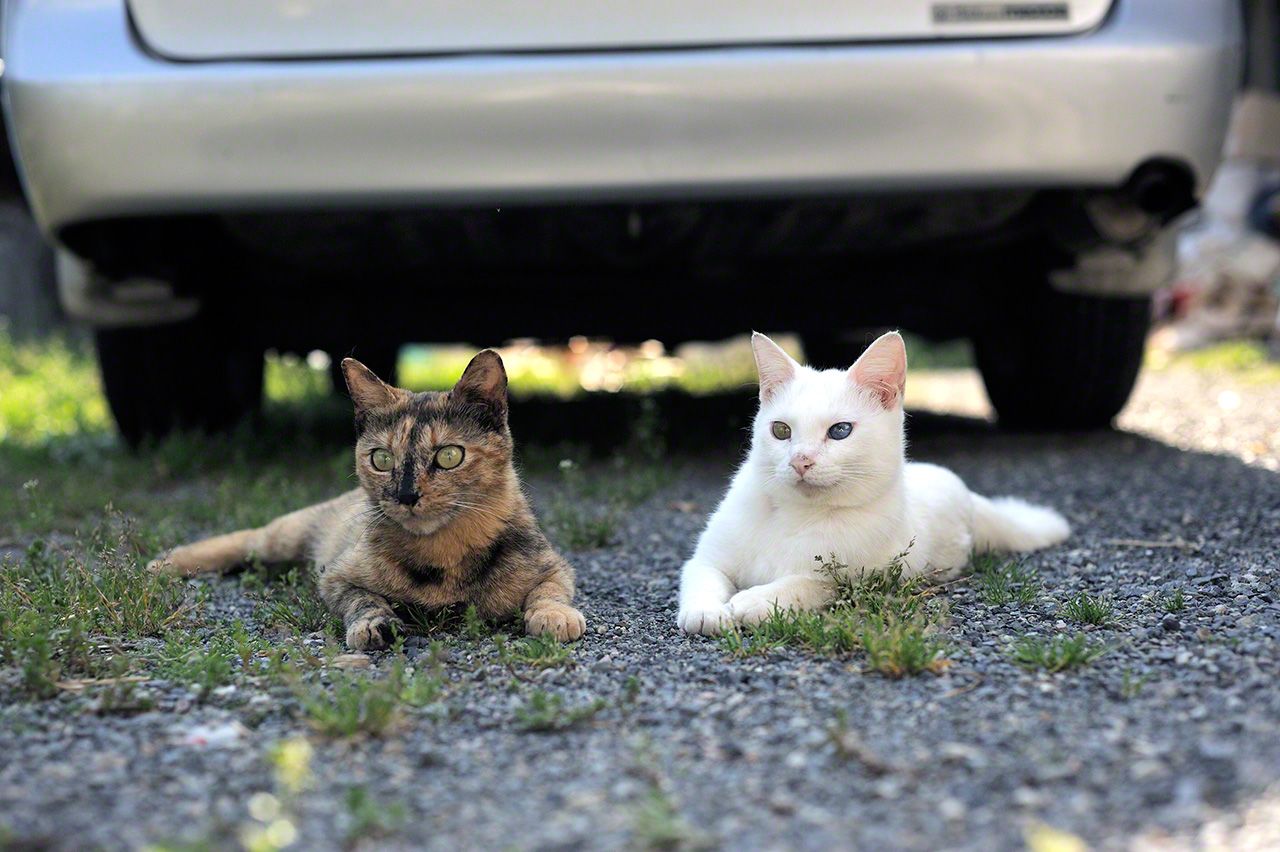 Sabi and Shiro relax on an early summer afternoon. 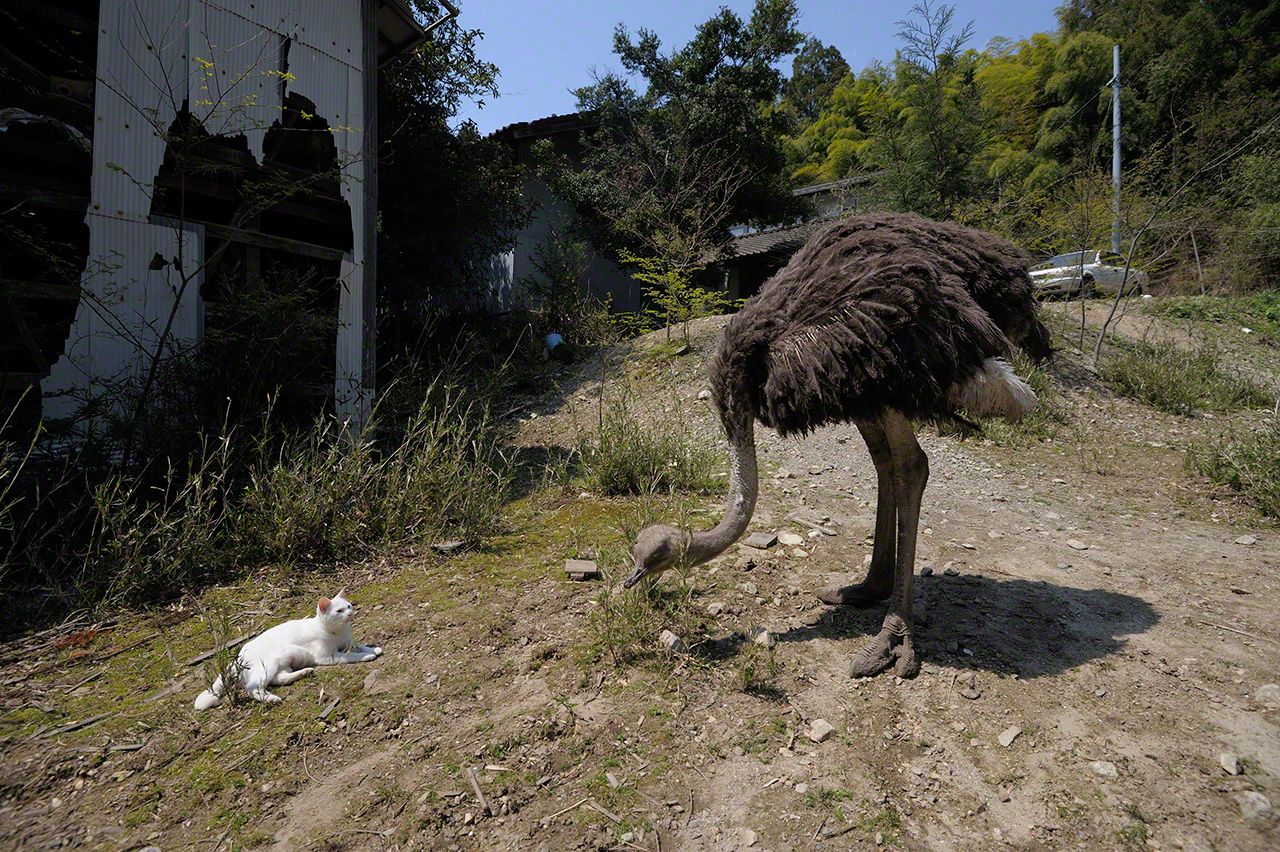 Shiro and Sabi were often found near (but not too near) this ostrich Matsumura looked after until it died in 2015. 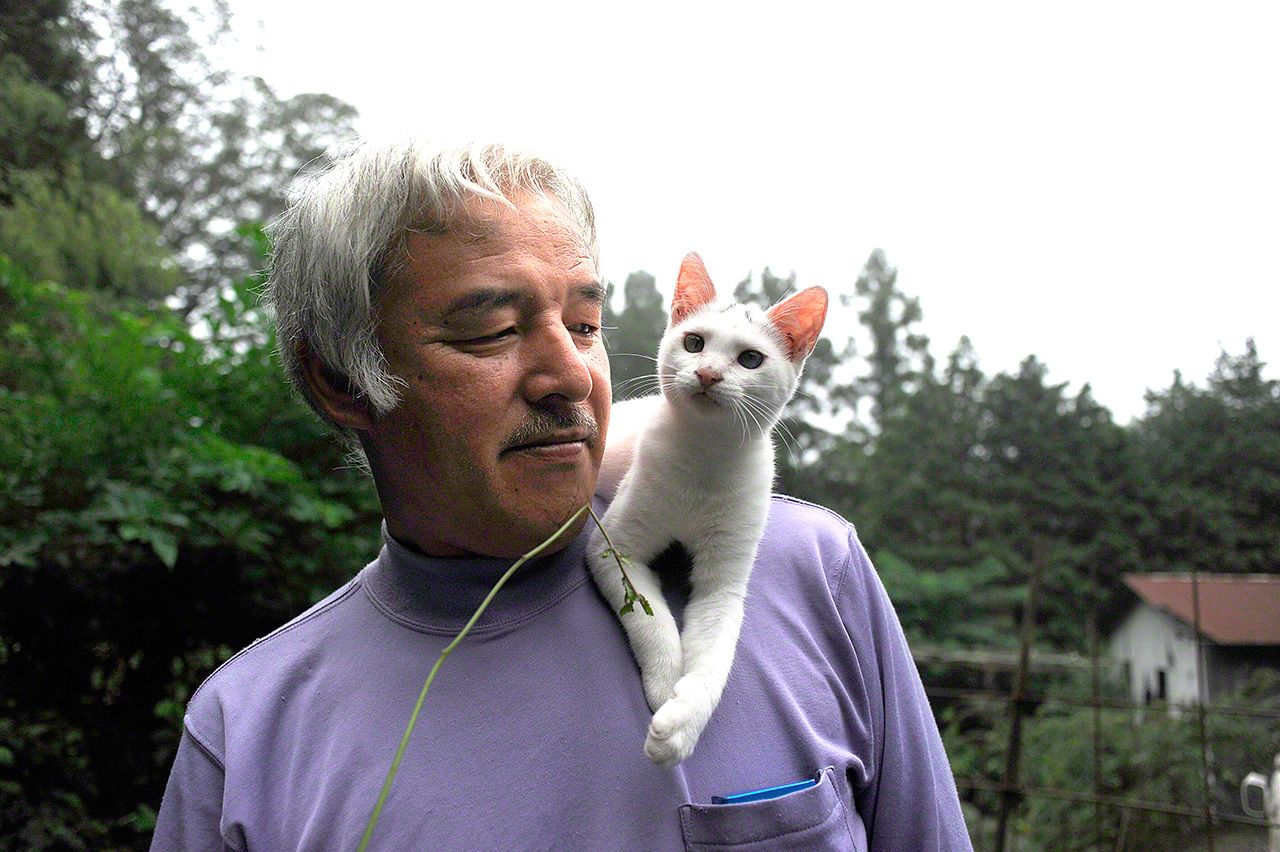 As a kitten, Shiro had a mark on her forehead like the kanji for eight (八), but it faded when she grew up. 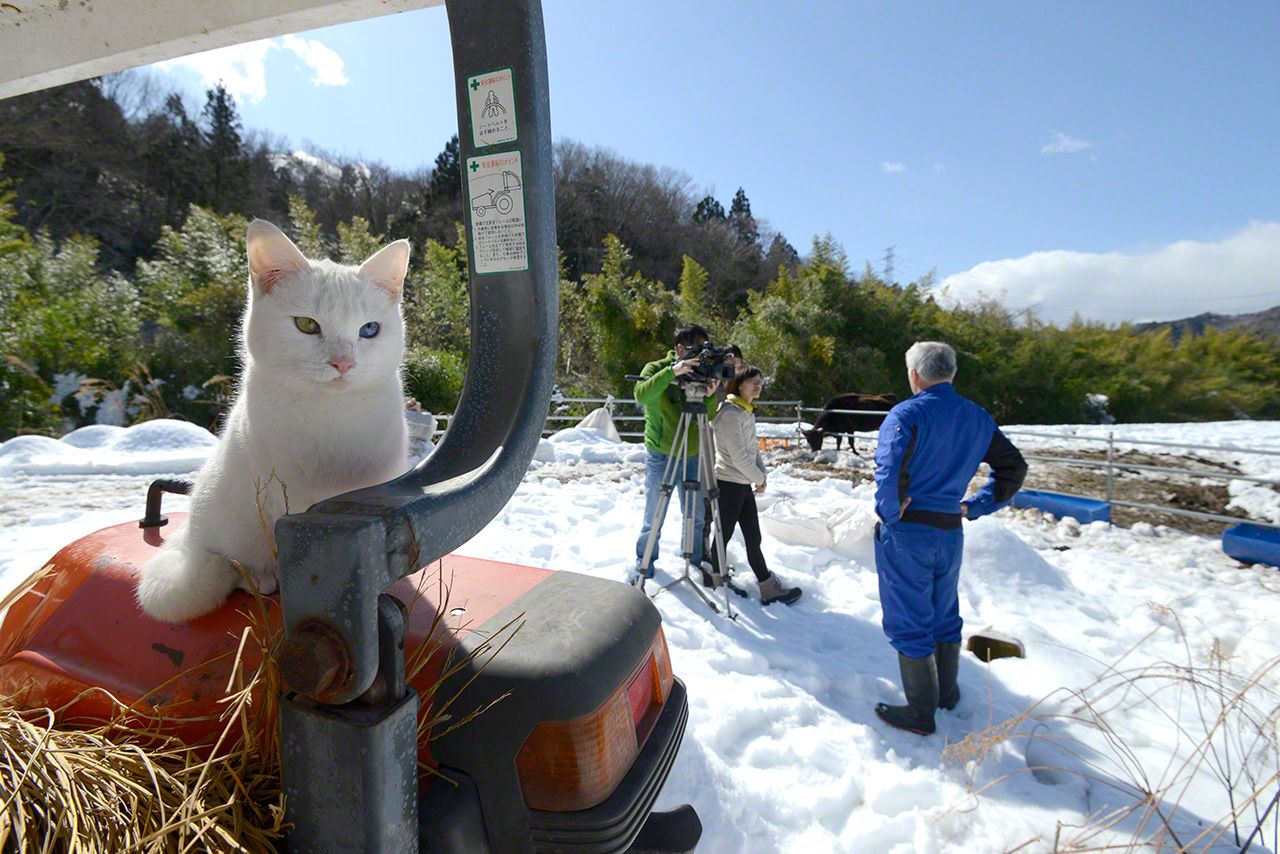 Matsumura has been interviewed regarding his activities by international media on several occasions. Here he is talking to crew from a Hong Kong television station. 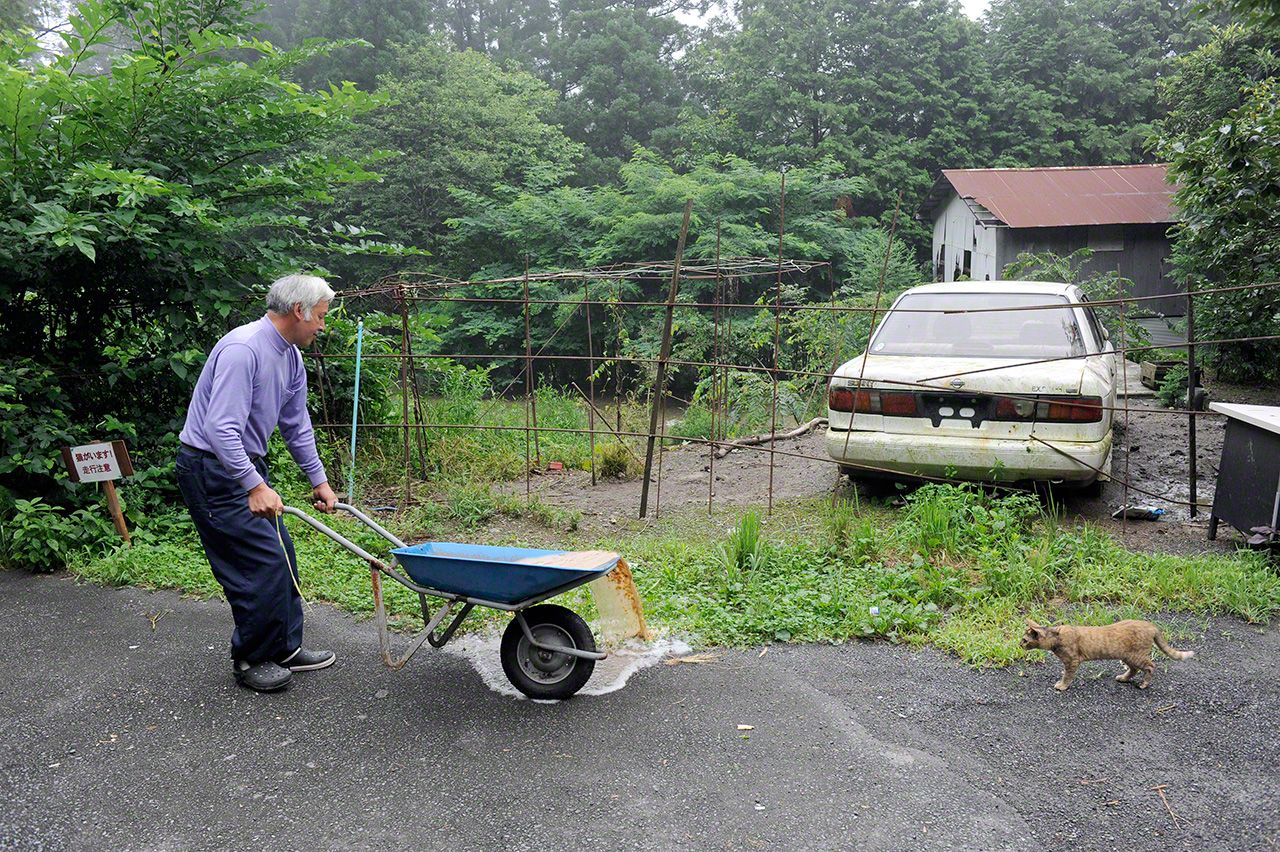 Sabi is always curious to see what Matsumura is doing. 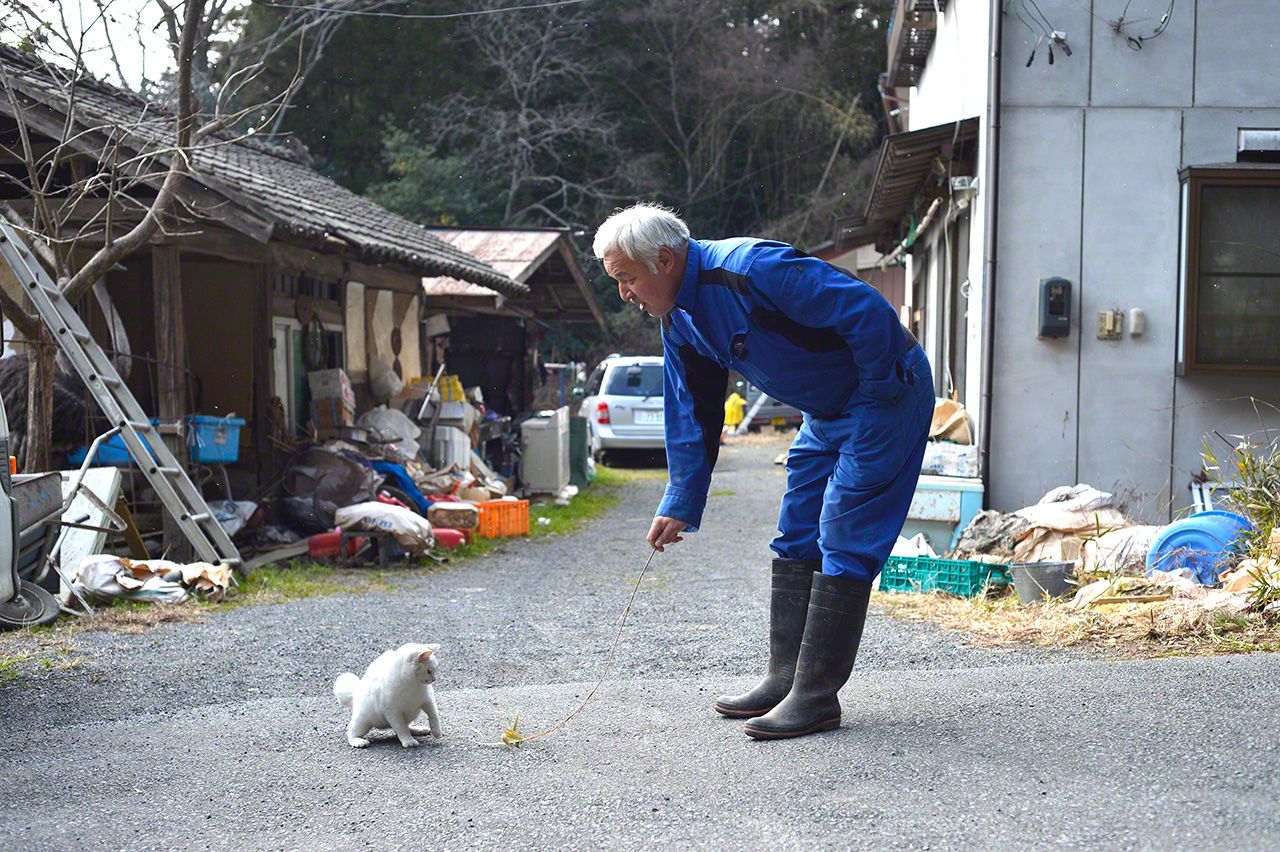 Matsumura playing with Shiro. It does not seem like a scene from a disaster zone. 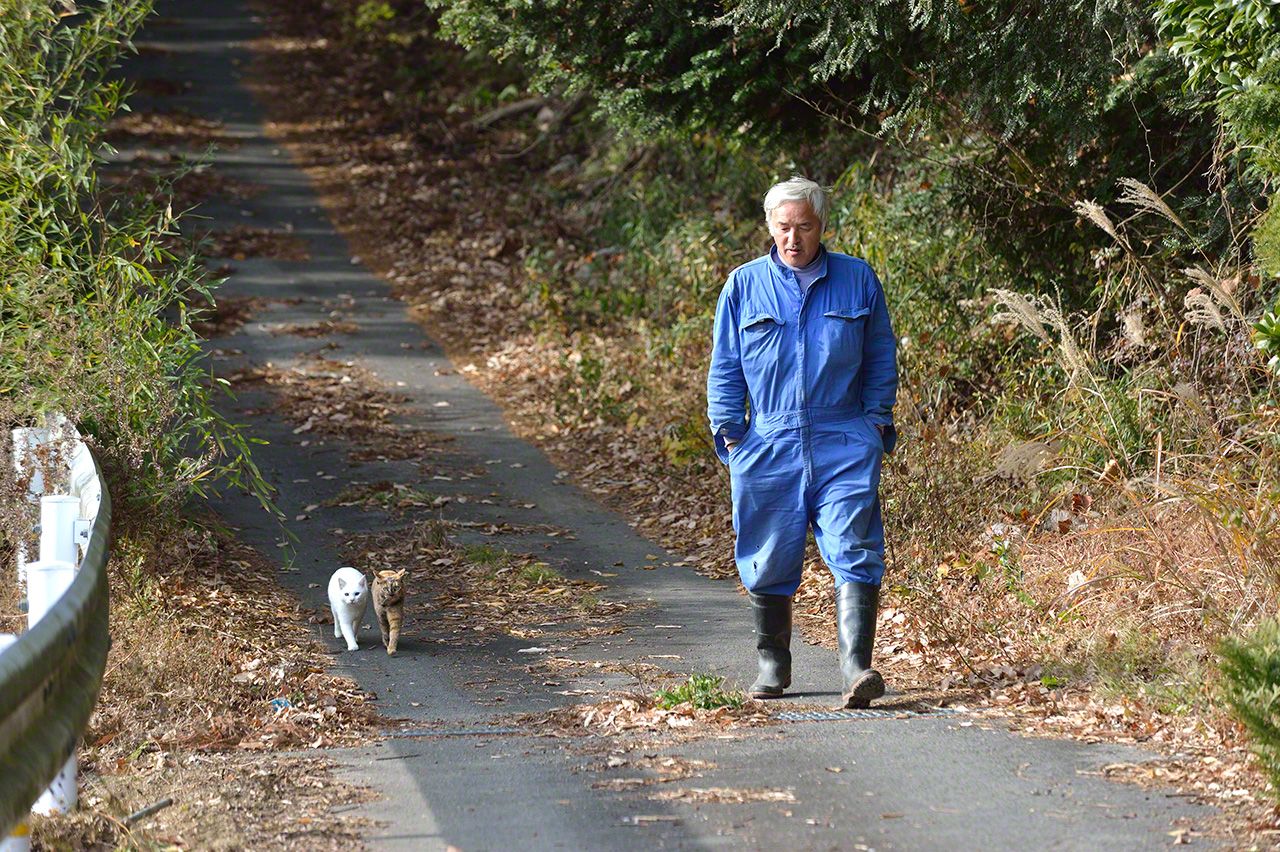 It’s a cold winter morning, but that’s no reason not to go for the daily walk. 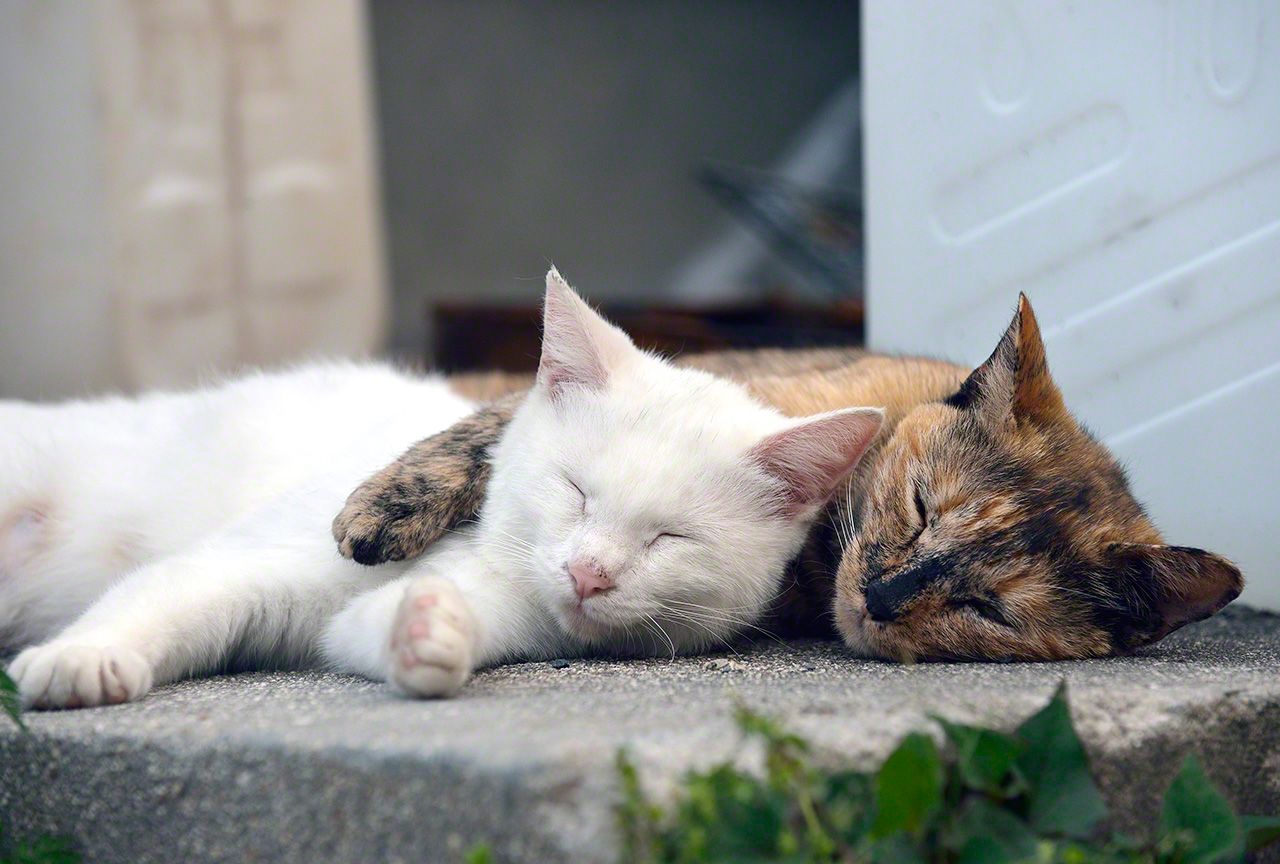 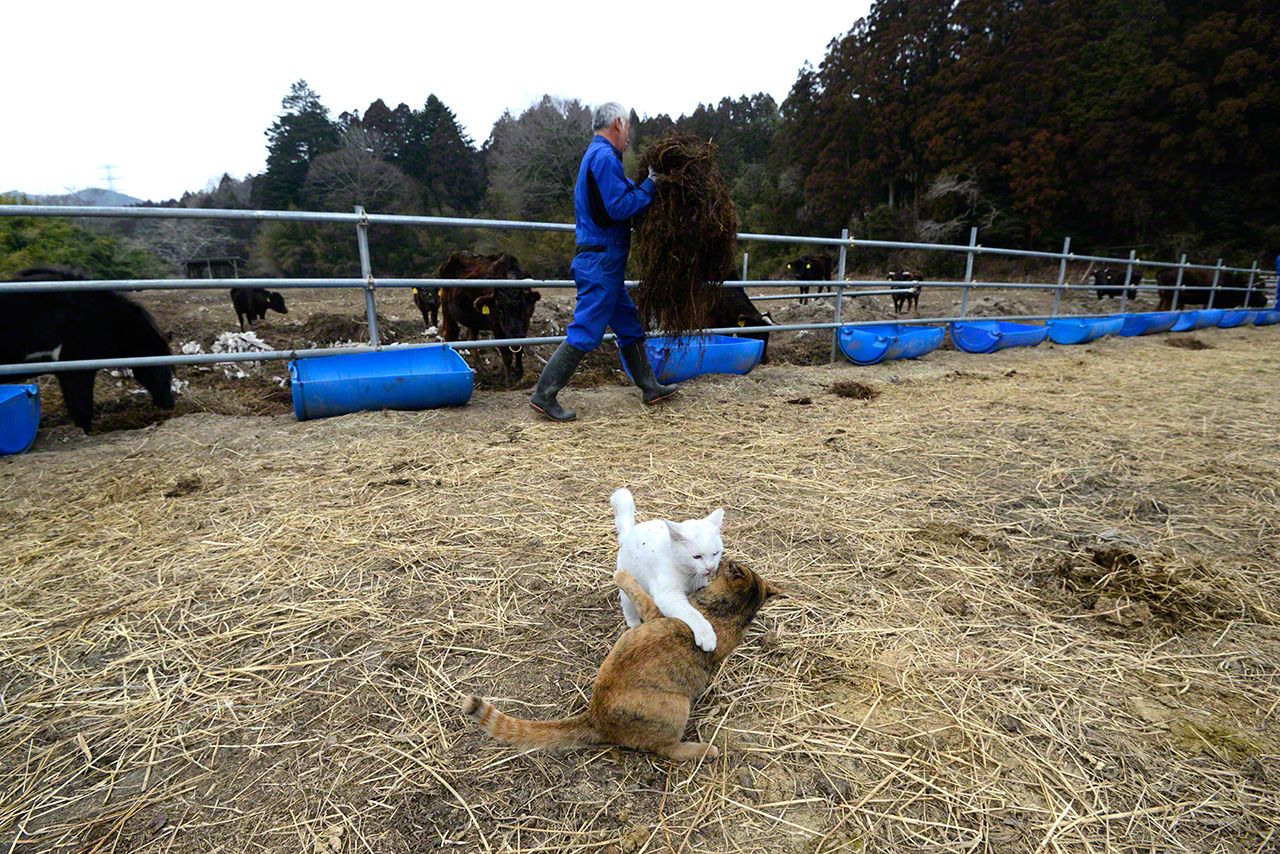 While Matsumura tends to the cattle, Shiro and Sabi frolic, snooze, and wait to go home. 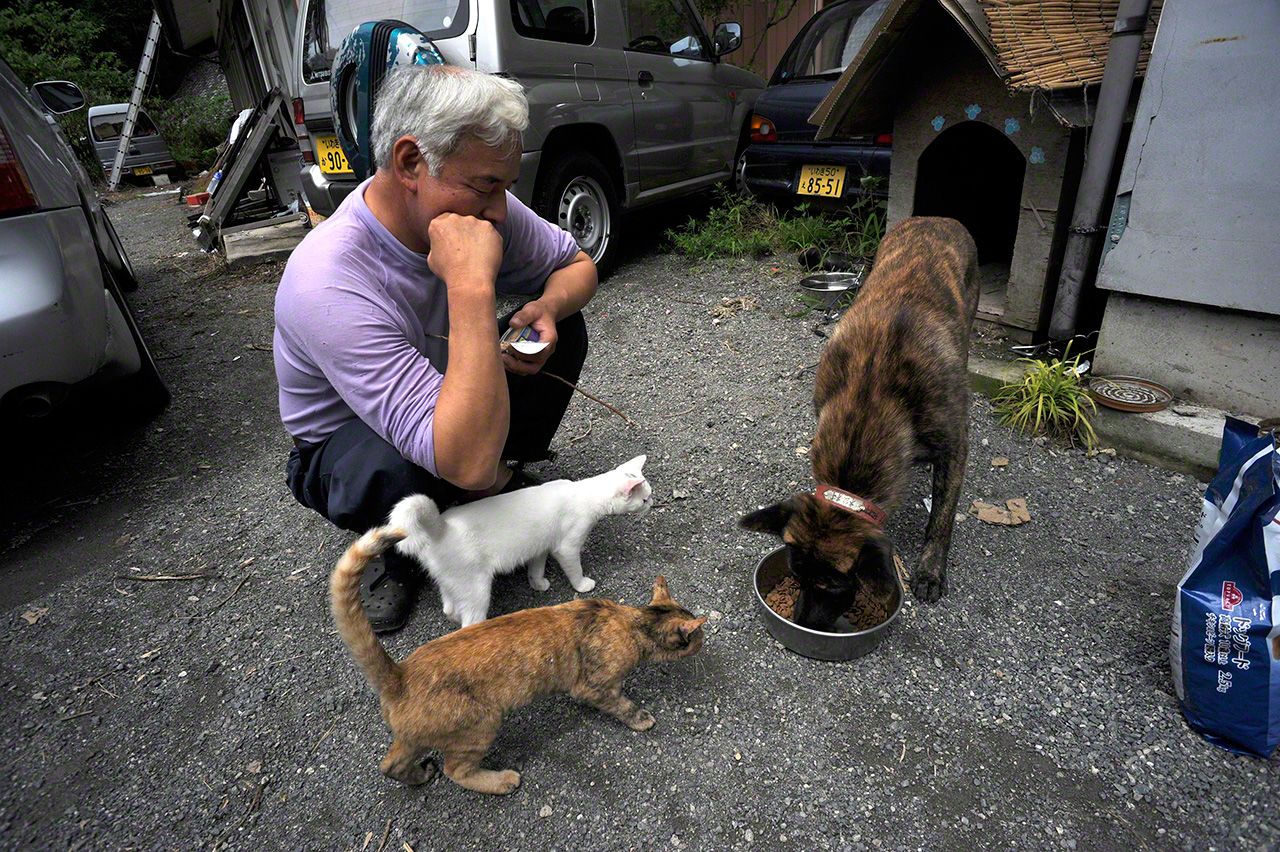 The cats are now good friends with Ishimatsu the dog, who has lived with Matsumura since before they arrived. 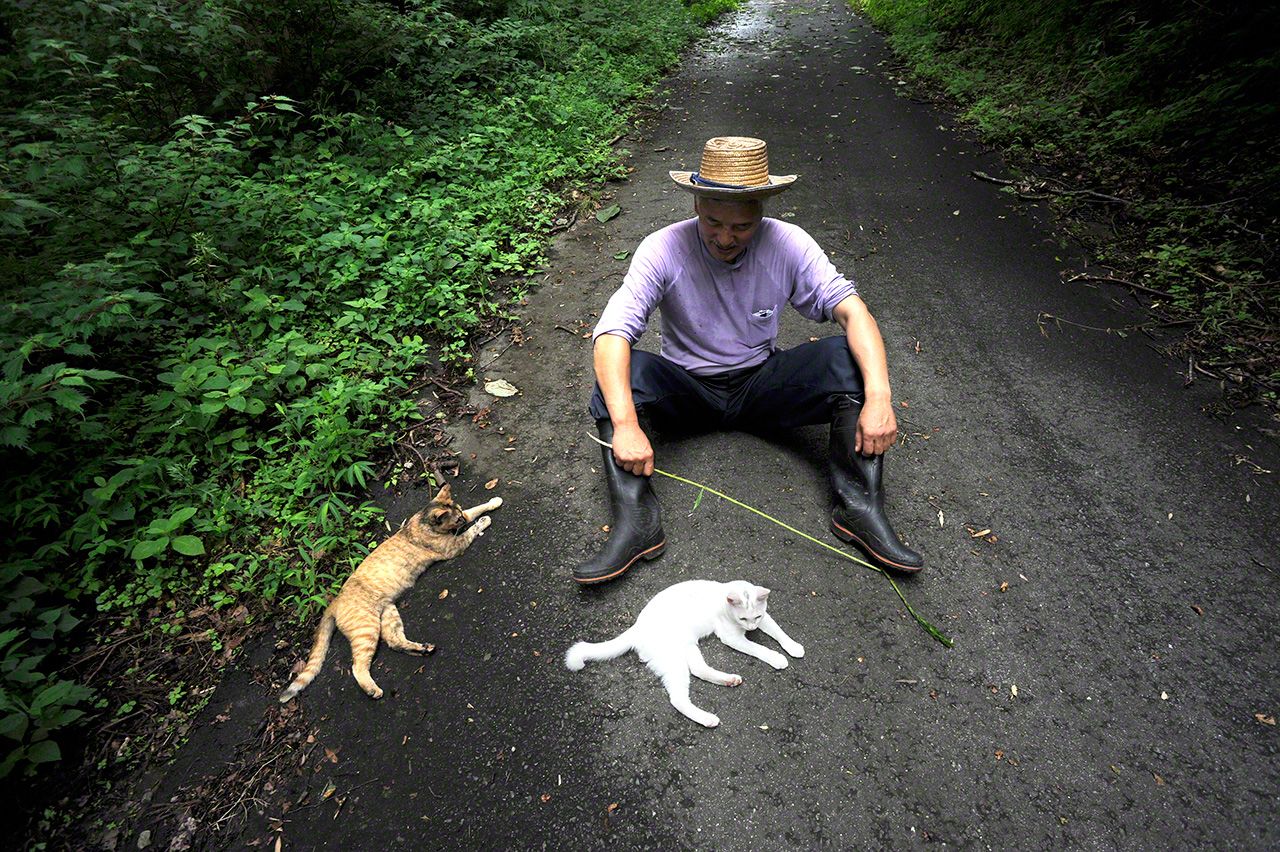 Resting in the shade on a hot summer day. 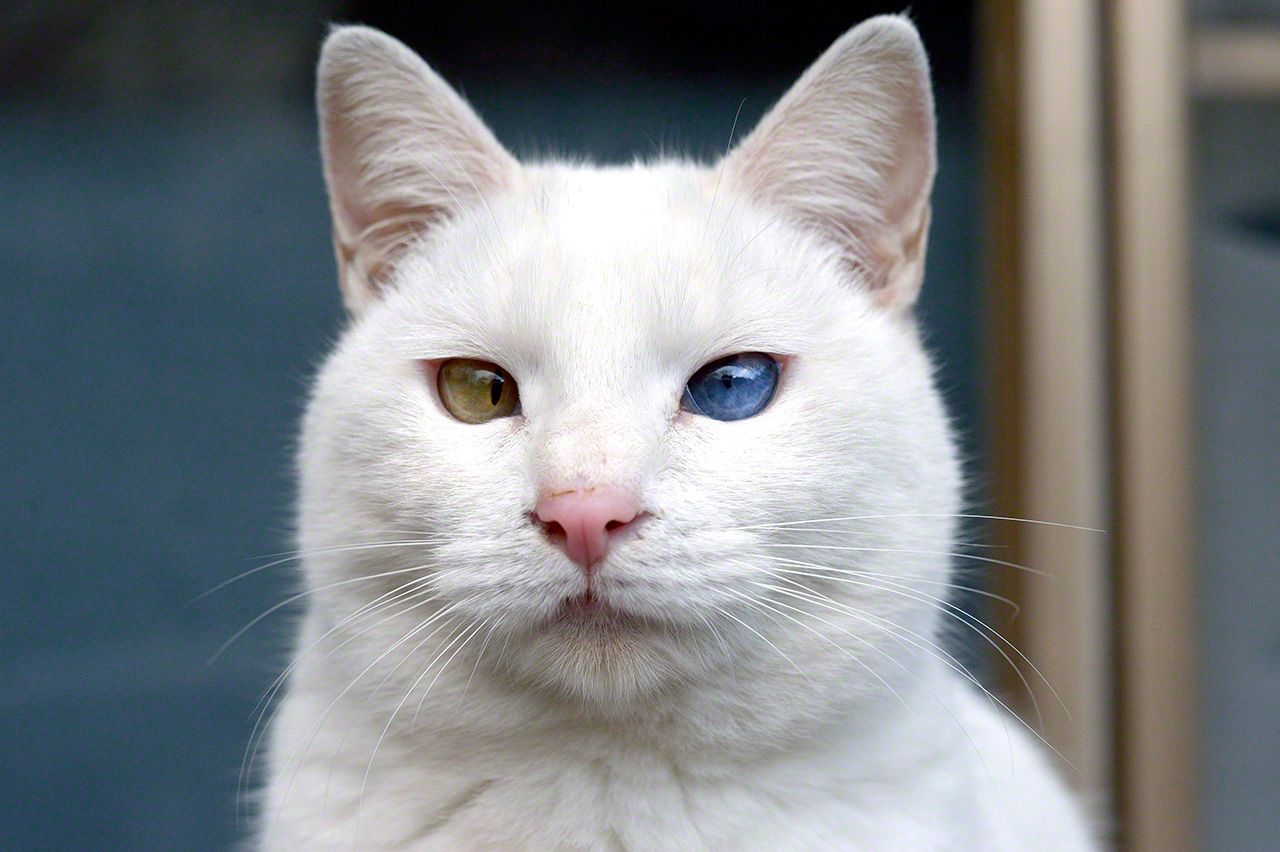 Shiro is lovable, showing a maternal care for Sabi’s kittens. 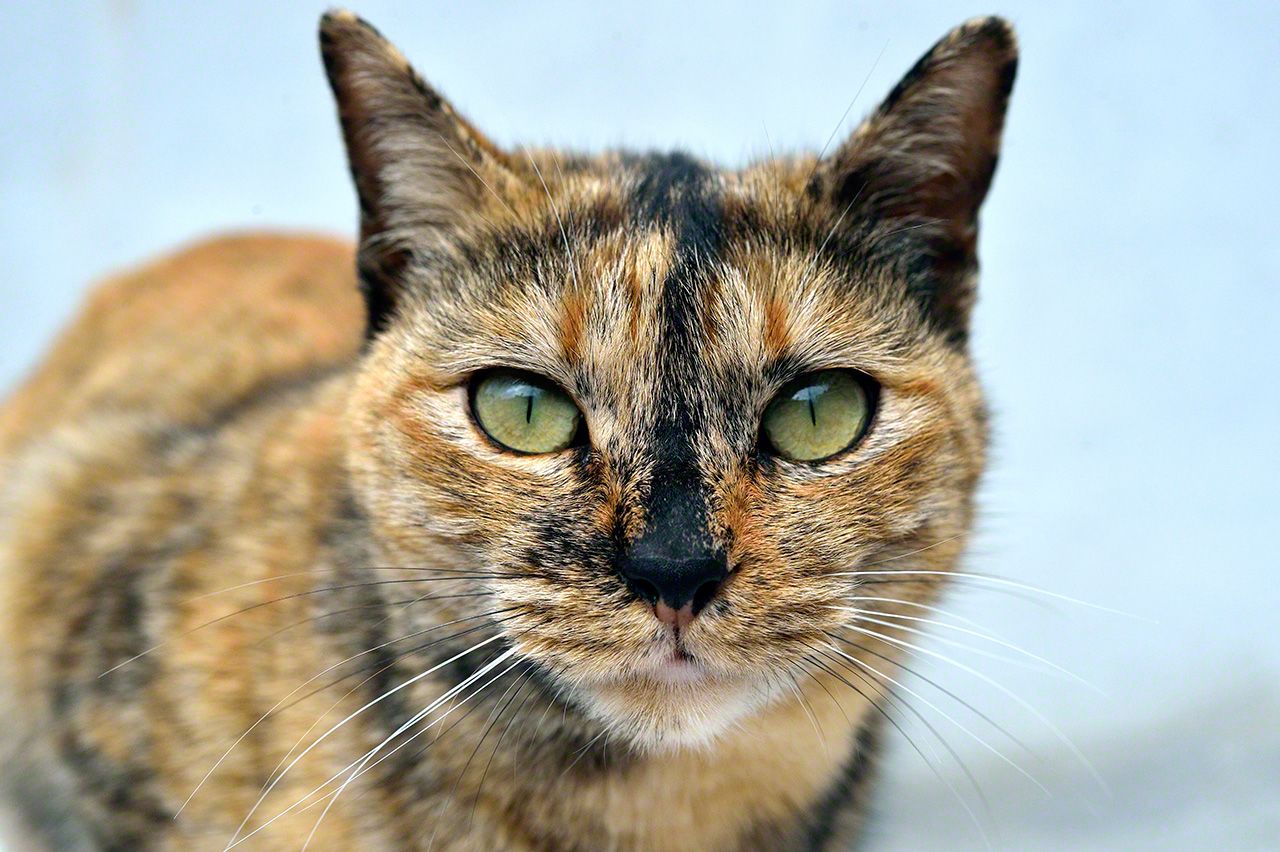 Sabi is the terror of local mice and moles, but a pushover when it comes to humans. 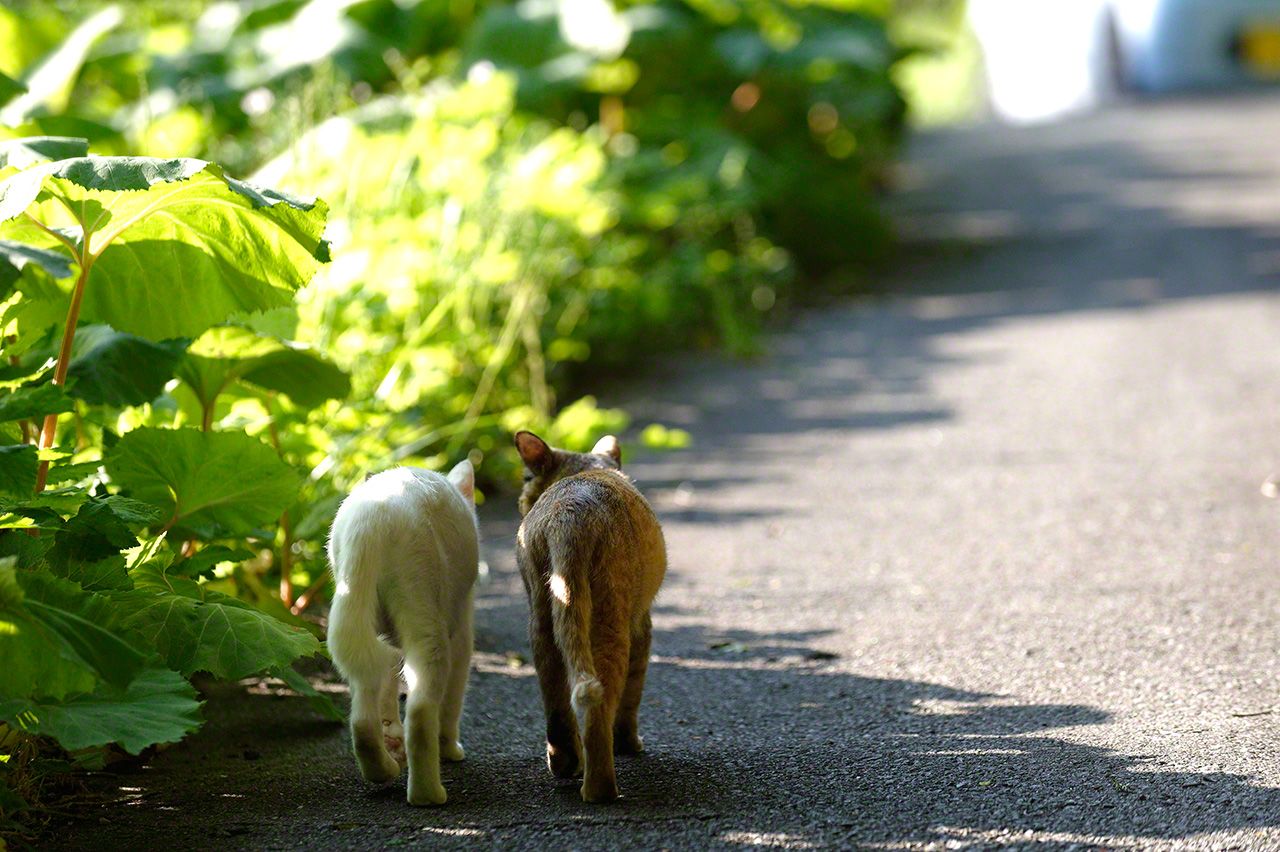 As Matsumura has shown, the first step to Fukushima’s revival is having the powerful will to live there. Shiro and Sabi are his constant companions.